Art fan? Munich, Germany has enough art museums to keep even the most ardent museum-goer busy. While I previously wrote about my trip to the Haus der Kunst, on my final day in Munich, I opted to visit a cluster of art museums called Kunstareal in the city’s Maxvorstadt district. The weather was grey and damp, so it seemed like a wise idea to stay indoors.

After arriving in the neighborhood at Universität station, I headed to a spot called Pommes Boutique for a quick lunch. The restaurant specializes in Belgian fries with an array of dipping sauces to go with them. 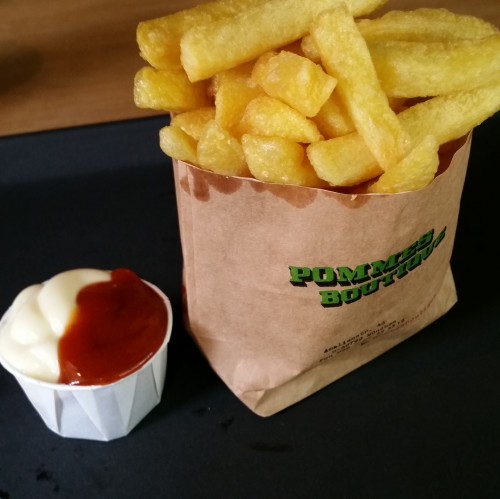 Now that I was no longer wandering on an empty stomach, it was time to head to the museums. I opted to visit the 4 main museums in the area in chronological order, starting with the museum featuring the oldest art. 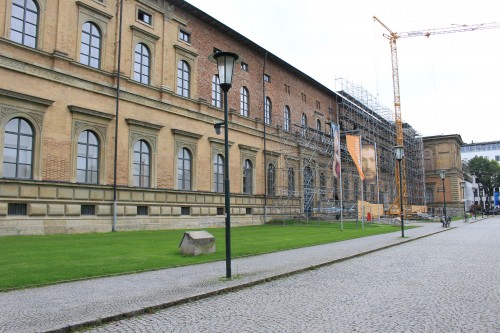 Of all of the museums I visited this day, this was my least favorite. For starters, large portions of the museum were closed as part of an ongoing renovation project that will last until 2017. I’m also generally not moved by the art from this period, as one can only look at so many pictures of a fat baby Jesus before getting bored. 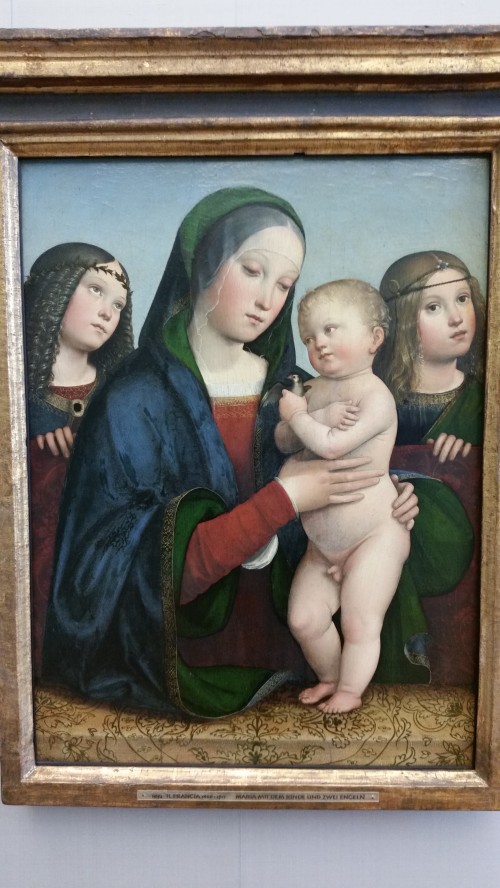 As an aside, how do you think Jesus would feel if he came back and found all of these portraits of him with a tiny baby penis? I bet he’d be pretty embarrassed. 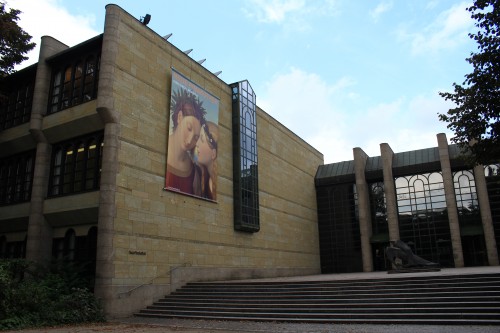 The Neue Pinakothek sits just across the street from the Alte Pinakothek, and covers European art from the 18th & 19th centuries. The art in the Neue Pinakothek was much more interesting than that in the Alte. I saw works from Goya, Turner, Renoir, Manet, Monet, Degas, van Gogh, Rodin, Picasso, Munch, and many more. 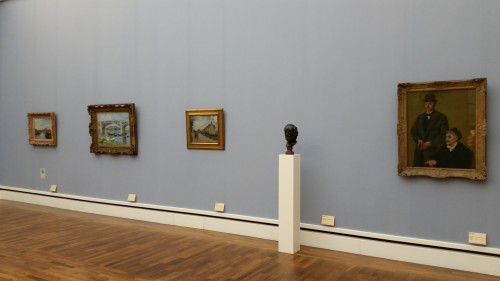 The building itself, which was made of stone and was comprised of many angles, was also interesting.

Two of my favorite works in the museum were Fritz von Uhde’s The Hard Path (The Road to Bethlehem), which conveyed a fascinating perspective & sense of movement, as well as a series of Greek landscapes by Carl Rottmann that were damaged in World War II and then restored. 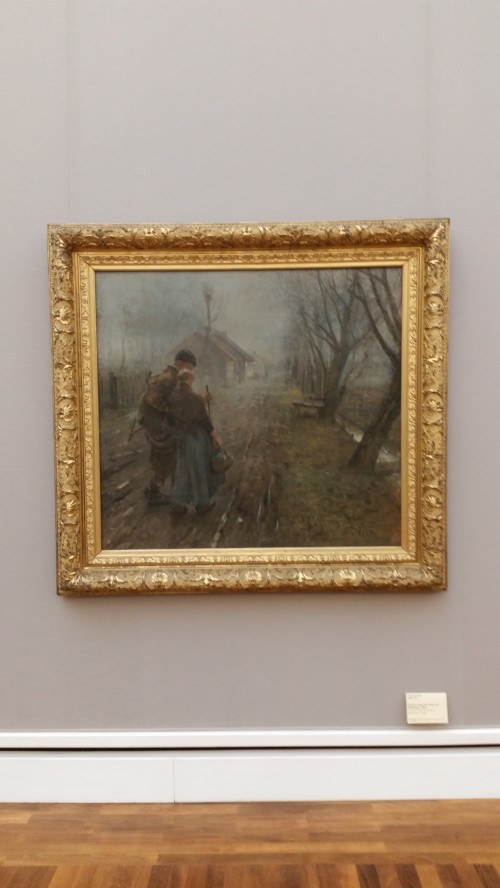 Fritz von Uhde’s The Hard Path (The Road to Bethlehem)

After my first 2 museum visits, I needed a bit of a break, so I headed to a famous local ice cream spot called Der verrückte Eismacher (translation: “The Crazy Ice-Maker”. The shop features an array of rotating ice cream flavors, so you never know what you might find that day. While you will certainly find traditional flavors like chocolate and vanilla, where Der verrückte Eismacher truly earns its name is from the crazy flavors concocted by owner Matthias Münz. As an example, on the day I went, I was able to sample beer ice cream (appropriate for Oktoberfest, of course), as well as fish ice cream. I was skeptical about the fish ice cream, but once you get past the slight fishiness of it, you realize it’s not all that different from salted caramel. The store’s creative inventions prove that ice cream-making can be every bit as artistic as the pieces in Munich’s art museums. While I did sample the most outrageous offerings, I ended up buying scoops of applesauce pancake ice cream, roasted almond ice cream and chocolate cherry sorbet, all of which were excellent. 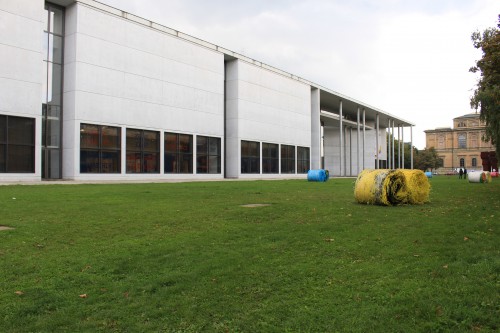 Following my ice cream break, it was time to head back to the museums, continuing my progression toward the modern day. The next museum on my list was  Pinakothek der Moderne which covers modern art, plus architecture and design. There were interesting exhibitions on the future of cities, the evolution of technological design, plus art from usual modern suspects such as Pablo Picasso and Andy Warhol. 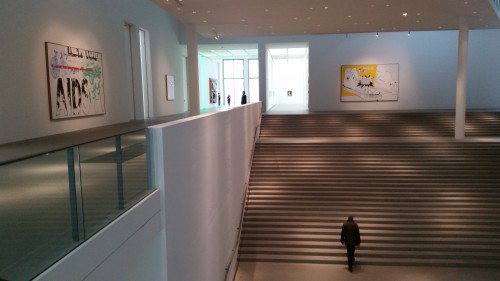 Some of the art was weird, as modern art can be, but overall this was my favorite museum of the day. The building itself was bright and spacious, even on a cloudy day. The strong design section covered everything from cars & motorcycles to electronics from Apple & Sony. If you ever want to feel old, go to a museum that has a Playstation2 on display as if it’s some sort of ancient artifact. 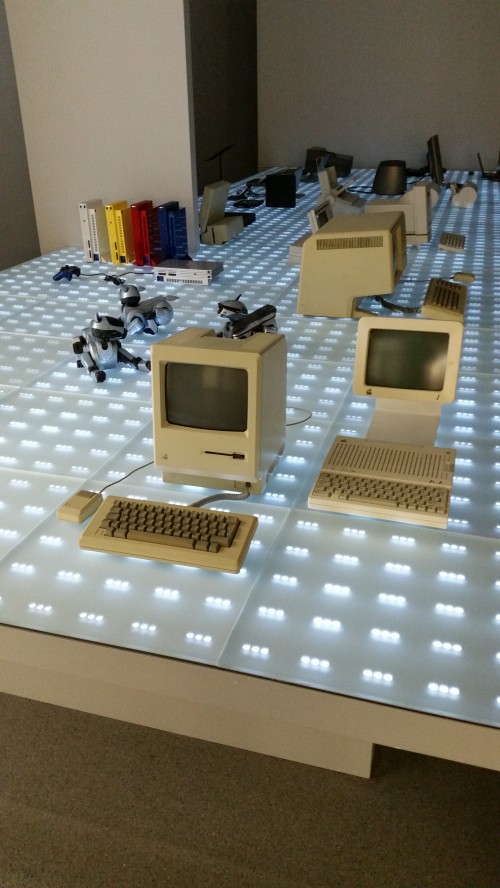 There was also furniture, which I tend to race past in museums, but with pieces from Frank Lloyd Wright and Charles Rennie Mackintosh on display, I lingered a bit longer.

Museum Brandhorst was my final stop of the afternoon. The building itself consists of multicolored stripes, running from top to bottom. Despite the greyness of the day, the facade was still the centerpiece of the intersection. 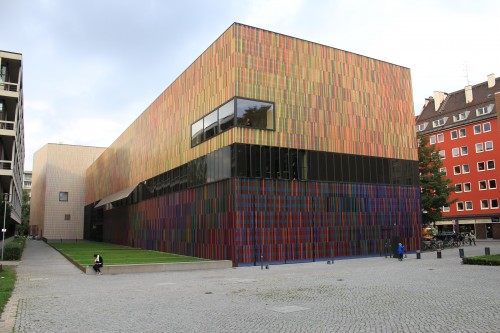 Inside, there were two large exhibitions from Andy Warhol, who seems to keep popping up everywhere I go these days, and Cy Twombly, whose work balances on that knife edge between brilliant modern artist and happy kindergartner. 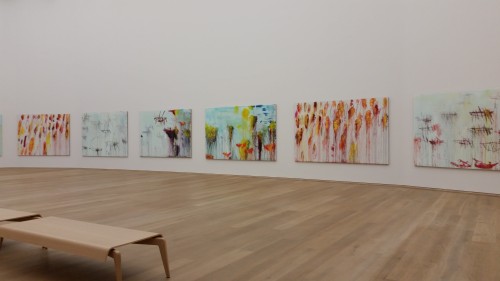 There was also a exhibition from Richard Avedon that featured his murals and portraits portraying American social life from the 50s, 60s, and 70s. In addition to his works, there was also a side room featuring a documentary about his life called “Darkness and Light”. If you’re interested in learning more about him, the full documentary is actually available on YouTube, and you can find it below.

Having made my way through 4 museums, my day was done. With its dense proximity of quality museums covering a variety of time periods, Munich is a must for any art lover.