Data analysis blog FiveThirtyEight conducted a survey regarding several flying etiquette questions. A total of 1,040 respondents (874 of whom were air passengers) were asked questions about what they thought was very or somewhat rude to do on an airplane. One of the key results of the survey was that 41 percent of people think that reclining your airplane seat is rude.

Here are some of the main findings of the survey: 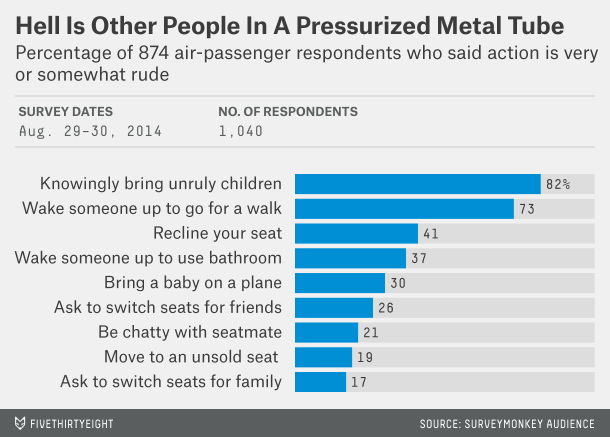 It’s interesting that 41 percent of the travelers surveyed believe that reclining a seat is rude. I’ve always assumed that if you have the ability to recline a seat, you can do it. Now I generally don’t recline my seat, since I’ve never found it to make me any more comfortable, but as long as people in front of me don’t slam their seat backward without looking, I can live with it. I wonder what percentage of that 41% of fliers are against other people reclining their seats, but are ok with doing it themselves. Given how much airlines are packing people onto planes, they might as well just stop allowing seats to recline. It would stop this entire debate.

The other survey questions are interesting as well.

Regarding 82% of people thinking it’s rude to knowingly bring an unruly child on a plane, the key word there is “knowingly”. While even a normally well-behaved child might have issues with the changes in air pressure or sitting still, those aren’t the kids people have a problem with. Most travelers are against flying with kids who are little demons no matter where they are and their parents can’t or won’t control them, yet bring them into an enclosed space for an extended period. I would have described this as rude as well, based on that wording. Unsurprisingly, FiveThirtyEight found that “passengers without children under 18 were three times as likely to consider bringing a baby on a plane very or somewhat rude than people with kids.”

Moving on to waking up someone to go for a walk, 73% of flyers thought that was rude. I can see that. It’s possible to do exercise in your seat, and unless you’re getting up to go to the bathroom, it’s not absolutely necessary. Now I rarely sleep on planes, so it’s not an issue for me, but I could see how it could bother sleepers. Amazingly, 37% of travelers believe it’s rude to wake someone up in order to go to the bathroom. I find this number shocking. If someone needs to go to the bathroom, what other option do they have? Personally, if I were sleeping, I’d much rather have someone wake me up than end up sitting next to someone for the rest of the flight after they’d soiled themselves.

The other survey questions aren’t particularly notable, though I will say that I’m in that 19% who finds it rude to move to an unsold seat, with the caveat that I only find it rude if it’s someone moving up to a seat that had been available for a surcharge, or if it creates an issue for someone else.

FiveThirtyEight asked a few other questions that were not on the chart above.

We also asked who should have control over the middle arm rests and the window shade. (The obvious correct answers to these questions are “the person in the middle seat gets both arm rests” and “the person by the window controls the shade,” but you really screwed up on these questions, America.) Only 14 percent of fliers said that, in a row with three seats, the person seated in the middle got both arm rests. Ten percent of respondents are fascists who said whoever puts their arm on the arm rest first gets it; 2 percent are sadists who think the people in the aisle and window seats get both arm rests; and 67 percent are socialists who think they should be shared. Five percent responded “other” and wrote in responses such as “whoever is largest” or “the youngest child” or “me.”

Forty-two percent of respondents acknowledged that the person in the window seat should control the shade, and 58 percent thought everyone should have a say in the shade’s status.

I’m 100% on the side of FiveThirtyEight writer Walt Hickey here. I’ve always flown under the assumption that the person stuck in the middle seat gets right of refusal over the armrests. Now not everyone will take advantage of this, especially if they’re small, but they are there for their taking. If they do take the armrests, then it is possible to share based on positioning, but that’s not a given. I’m amazed that only 14% of fliers felt the middle person should get both. Ideally we could all share, but given all of the recent flight diversions, sharing is not an optimistic outcome when flying.

The responses over the window shade are even more surprising. I didn’t realize there was even a question over who would get to control it. If you sit near the window, you control the shade. I love looking out the window, so I generally try to sit in that seat as long as it’s not a transoceanic flight. I never even considered that someone else might think they get control over the window shade. Now if the sun is blinding someone, I’d reconsider, but otherwise, I’m looking out that window.

This entire survey is interesting and there’s one key learning from it: 100% of people reading it wish they could be rich enough to fly on a private jet so they don’t have to deal with anyone else’s crap.