My time on New Zealand’s beautiful South Island was coming to an end, but not before one last journey through some of the most scenic parts of it.

We stopped several times all over Nelson on the way out of town. Given that it’s not the biggest place, I’m not sure why all the stops couldn’t have been combined, especially since only one or two people got on at each one. The bus was only about half full, making it one of the emptier buses I took when I was in New Zealand.

The bus ride from Nelson first passed along the coast, from which we could see the unique geological feature called the Nelson Boulder Bank, then went through some mountainous areas that were quite pretty. Unfortunately, there weren’t any stops in this area, and I was on the wrong side of the dirty bus windows to get photos.

At Havelock, we were treated to this great view out over the water where the Pelorus River meets Mahau Sound. 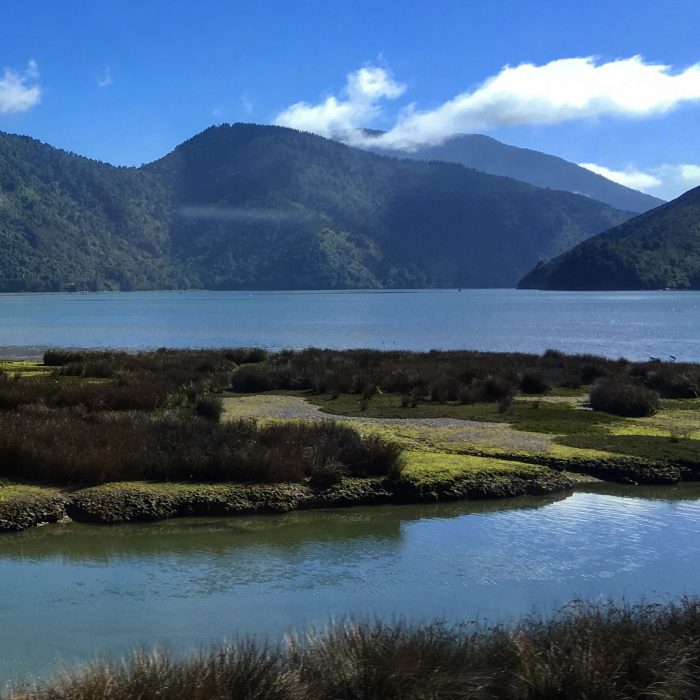 From there, we headed out of the way to the south, passing through the Marlborough wine country and stopping in Blenheim before heading back north again to Picton. 70% of New Zealand’s wine is produced in this region. Blenheim is the connection point for buses south to Christchurch, so lots of people got off the bus here. Surprisingly, very few people were heading to Picton, at least on my bus.

We arrived at Picton, where the final bus stop was not far from the ferry terminal for the InterIslander Ferry to Wellington. I had about three hours to kill before the ferry would depart, but to my pleasant surprise, the ferry service offers checked luggage. I had expected to have to drag my suitcase around all day like I did when I took the ferry from Tallinn to Helsinki. 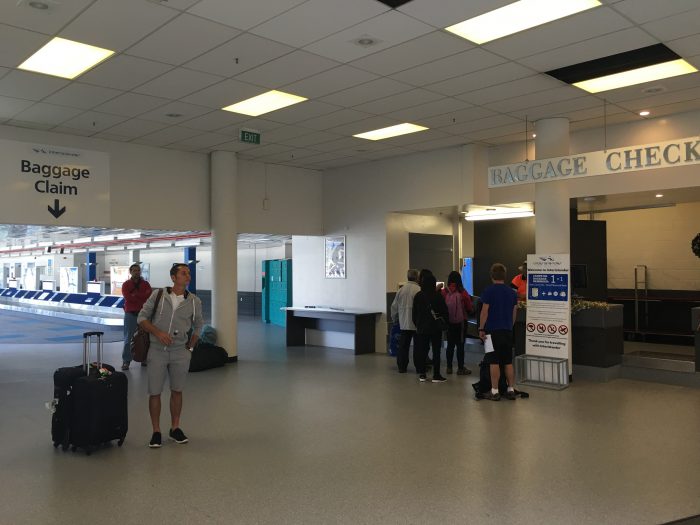 After checking my suitcase, I walked to the Picton city center, which is only about a 5 minute walk away from the ferry terminal.

Picton is a nice little seaside town. I wouldn’t mind spending a couple of relaxing days there sometime if I go back to New Zealand. There were plenty of nice areas to walk along the water, as well as some hikes into the hills. If I’d had more time and not wanted to go eat, I could have gone further than the waterfront & city center area and checked out the Victoria Domain, a hilly area just northeast of the city center, or the Whenuanui Bay Scenic Reserve, which is just to the northwest of the town. 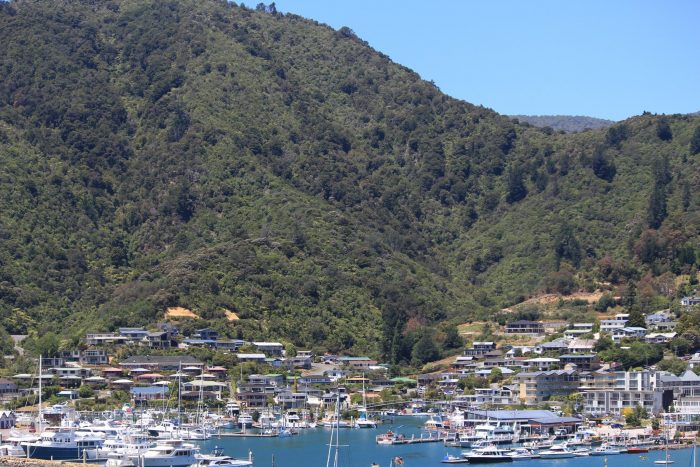 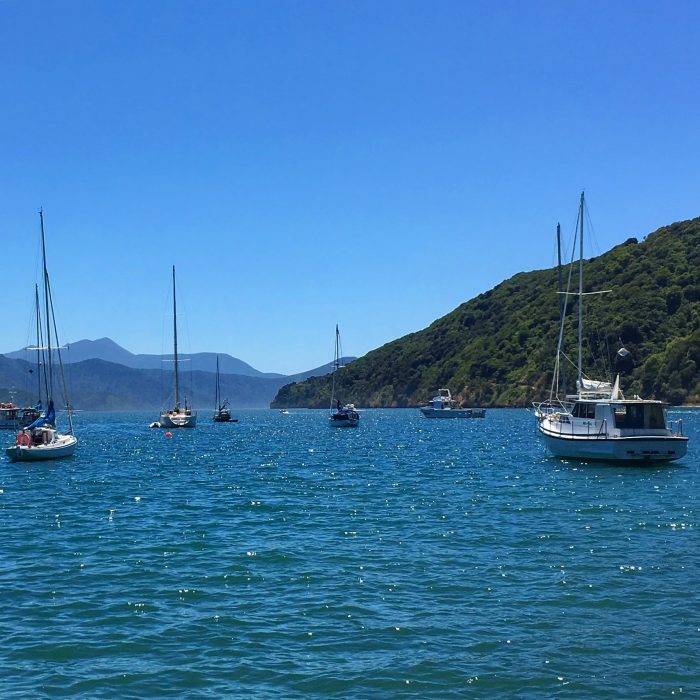 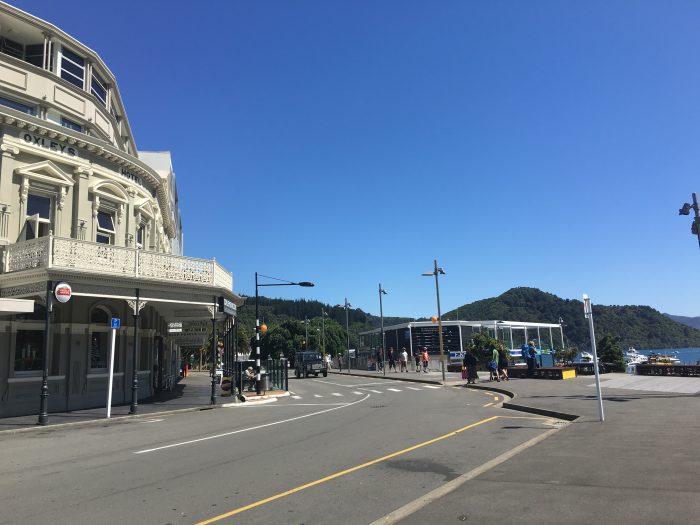 Along the waterfront, I passed a museum holding the Edwin Fox, which is apparently the 9th oldest surviving ship in the world. There was also a museum called the National Whale Center, which is free to enter, but it was closed that day. 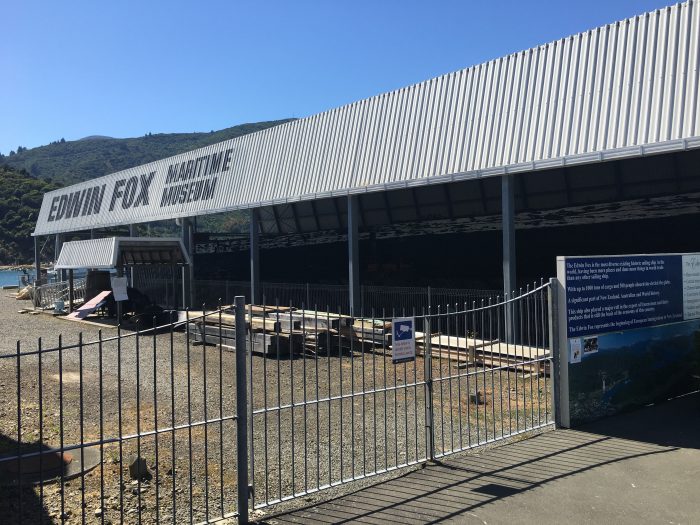 There were also plenty of restaurants, some of which advertised craft beer. The area is known for local mussels. I stopped lunch at a place called the Escape to Picton Seafood Restaurant. I had a nice seafood chowder that was packed with seafood, as well as some garlic bread. Afterward, I stopped at an ice cream van, since it was so warm out. 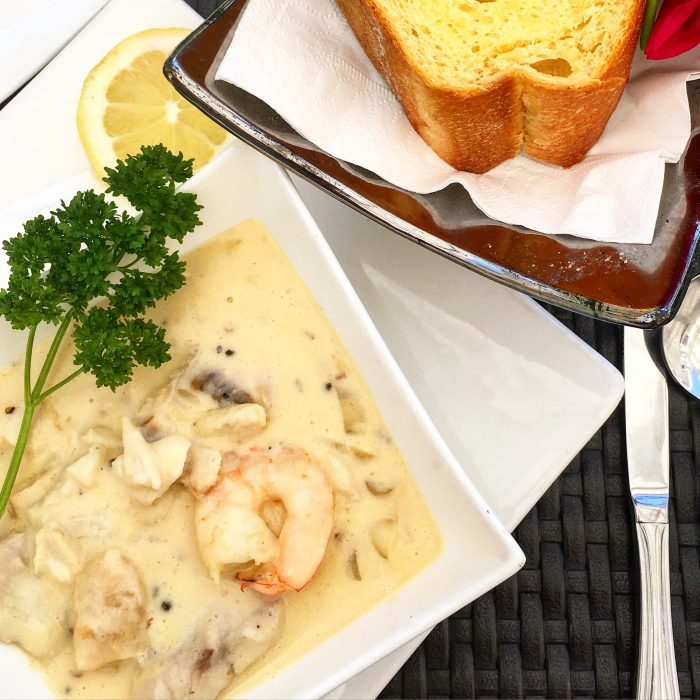 After I ate, it was time to go back to the ferry terminal. It was crowded, but the ship was huge. The ferry ride from Picton to Wellington takes about 3 hours & 15 minutes. Note that it may leave a bit early, so pay attention to the boarding time and not the departure time. 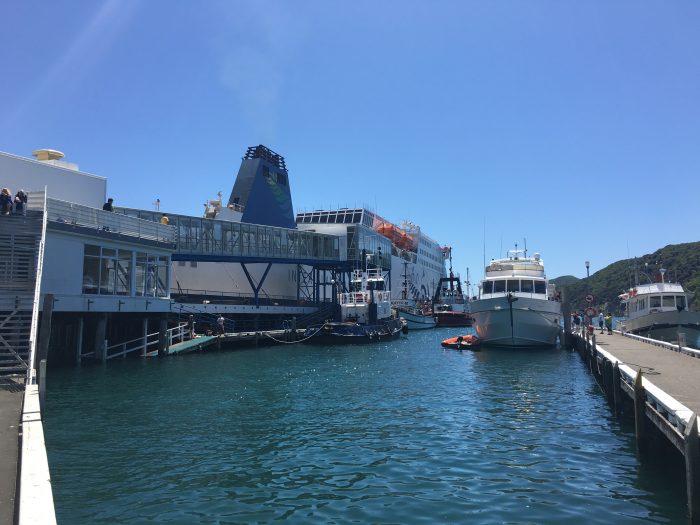 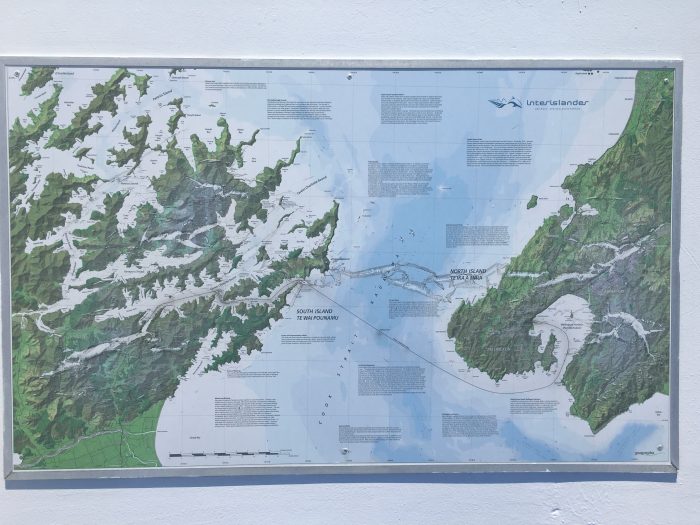 Upon boarding, I immediately headed to the roof deck, since I knew the views would be amazing on such a clear day. The roof deck wasn’t huge, and it was divided into two halves, so you couldn’t get a 360 degree view all at once unless you were at the very front. I wasn’t sure which side of the ship was the best to sit on, but I figured I wouldn’t be sitting for long, which ended up being the case. 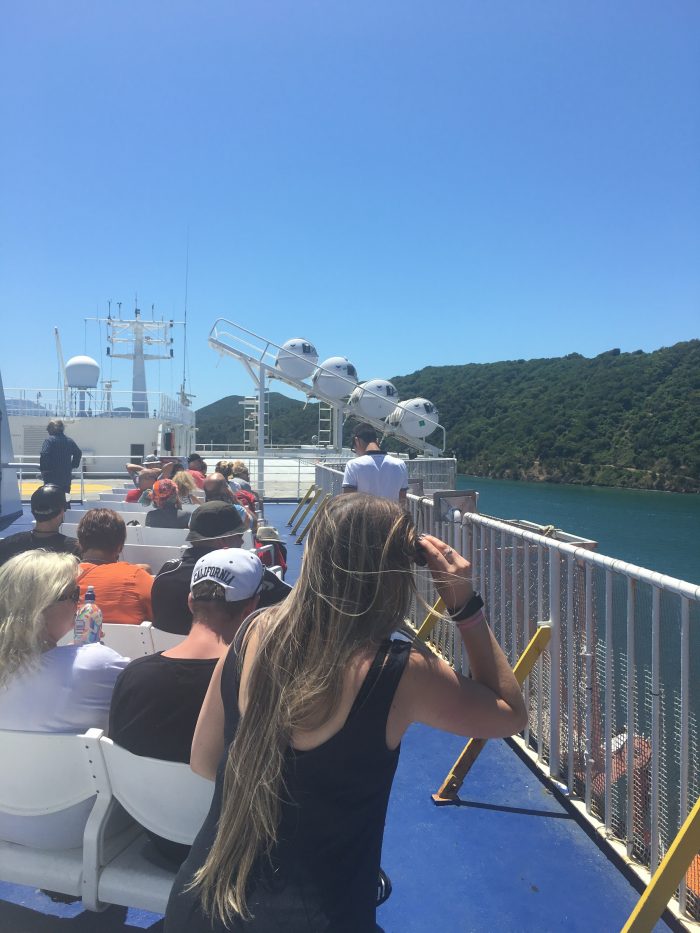 The first hour or so of the ferry journey passes through Queen Charlotte Sound, with hills and islands lining both sides of the water, so there’s plenty to see in every direction. It was a phenomenal to be out on the water. 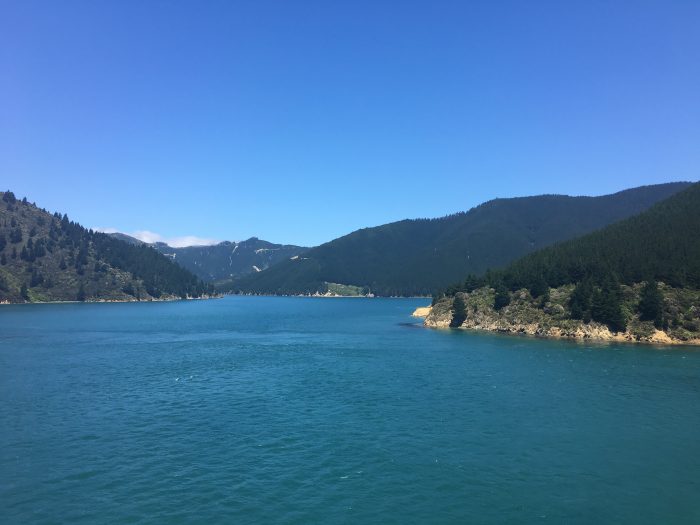 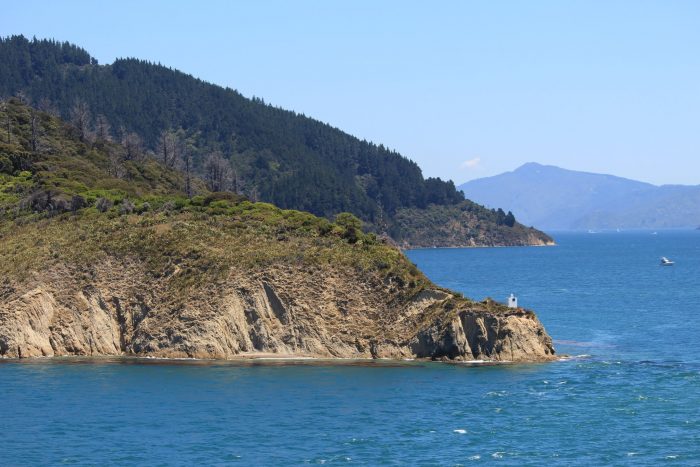 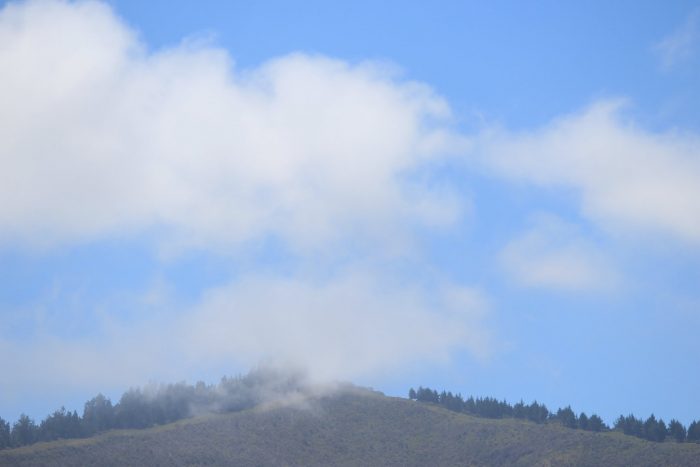 It was yet another day with perfect sunny weather. There were lots of people out boating on the water, and so many gorgeous houses lining the shore. It seems like a lovely area to retire, as it’s beautiful, but you’re still only three hours away from Wellington if you want to go to the city. 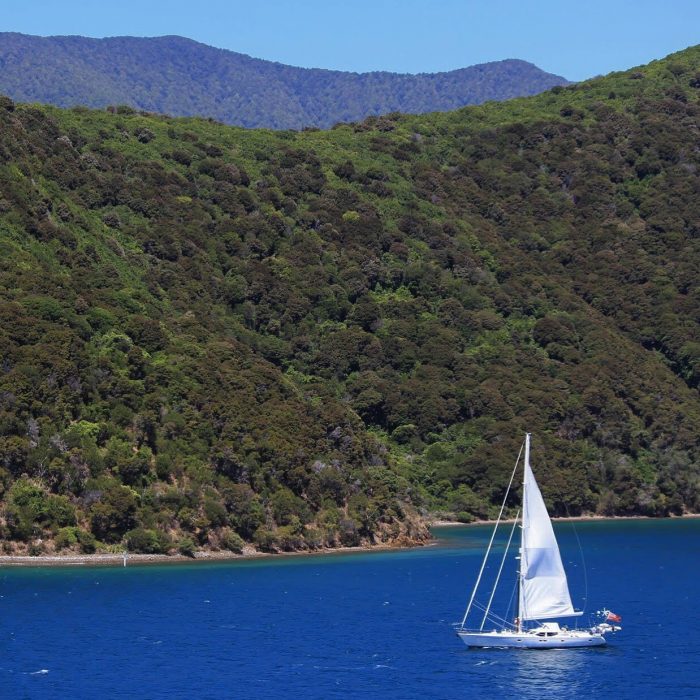 I stayed outside on the top deck of the ship until we passed the tip of the West Head & headed out across the Cook Strait. 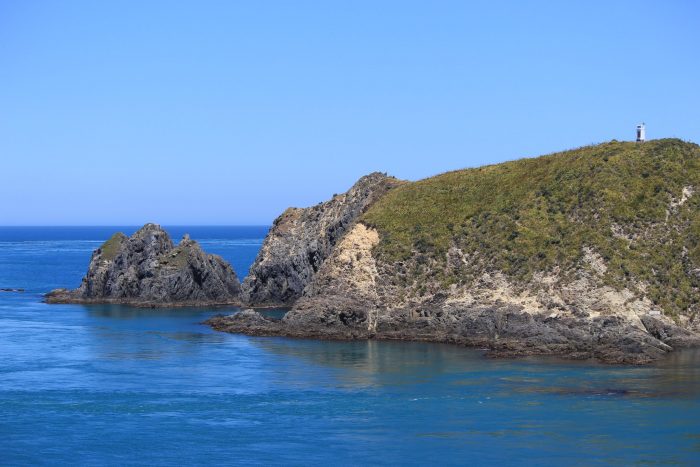 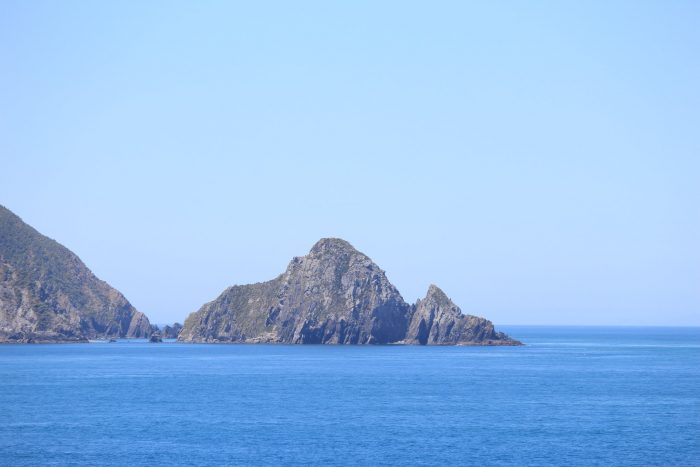 Inside the ferry, as is the case with most large ferries, there were lots of restaurants, bars, and other activities to pass the time. 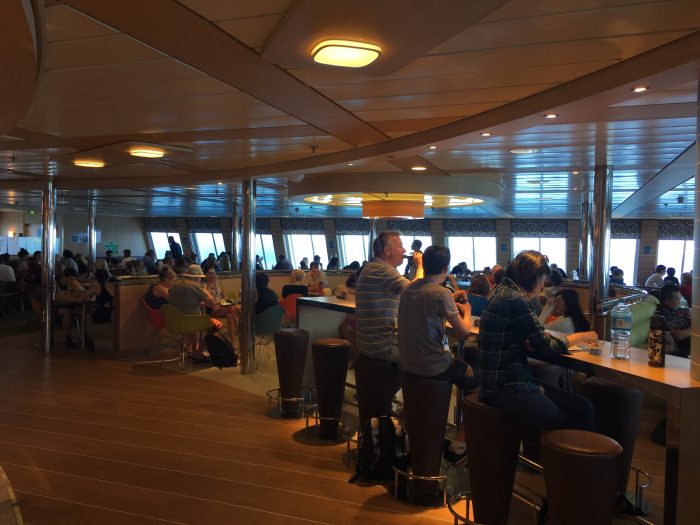 There was a premium lounge available for 45 NZD, as well as a theater that was showing recent movies such as The Martian & Pan. I would have been tempted to see The Martian, since I hadn’t watched it yet, but I wanted to see the scenery. I imagine that on a day with worse weather, the movie theater is more popular. For the kids, there was a magician doing shows to keep them entertained. 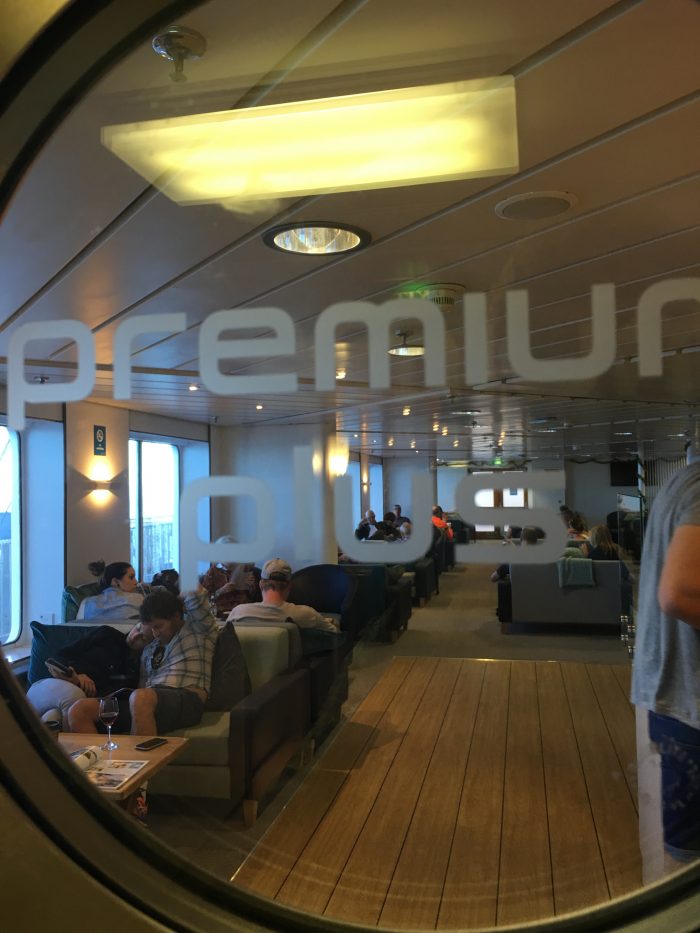 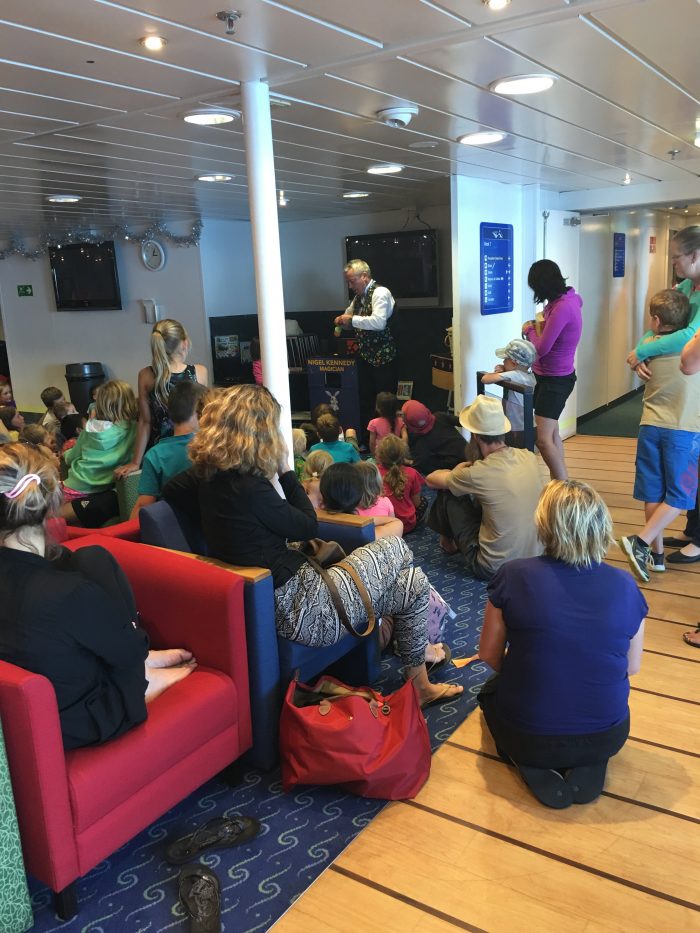 The lounges had lots of windows looking out across the water, plus hot & cold food and lots of different drink options including craft beer. I was about to have one, but the bartender thankfully double-checked with me if I still wanted it after he grabbed a bottle only to find that it was warm. I’m not sure if the cooler was broken or what, but he understood when I passed.

On the back of the ship on Level 8, there was a smaller deck with some nice lounge chairs. Above, there was even an atrium on Level 9. Sadly, unlike my trip to Helsinki, there was no Estonian cover band playing the City of New Orleans. I didn’t stay out there long, since it was broiling thanks to the sun blazing through the windows. 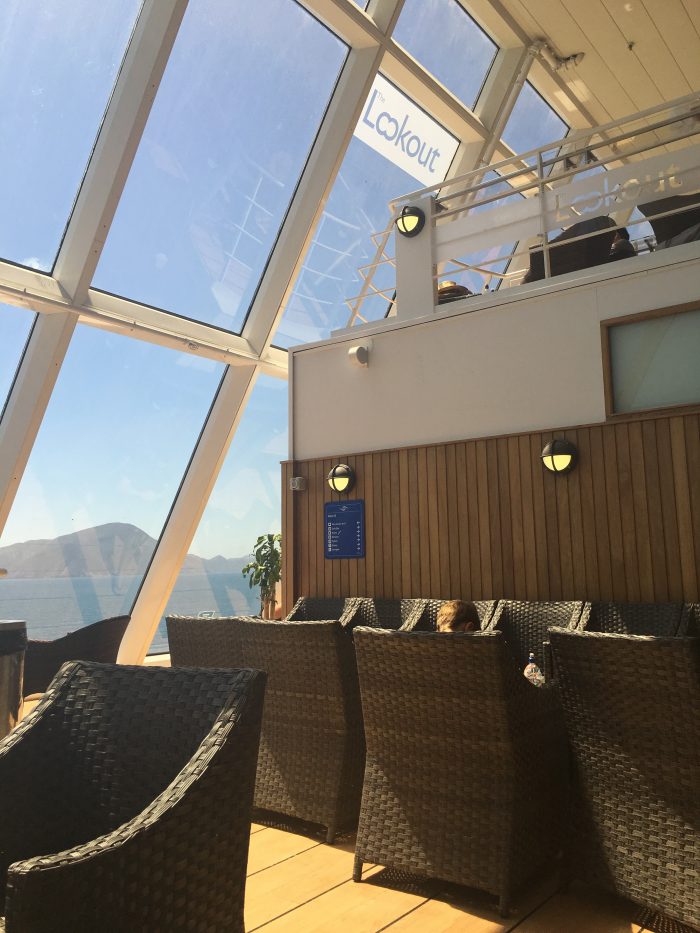 There was one area of the ship that had comfortable chairs that were like nice train seats, all facing forward and looking out of large windows. This wasn’t the Premium Lounge, but it looked like a nice area to sit and relax, despite it being fairly busy. The seats at the very front were of course taken thanks to the view, so if you know you don’t want to go outside, these seats might be worth making a beeline for when you’re boarding. 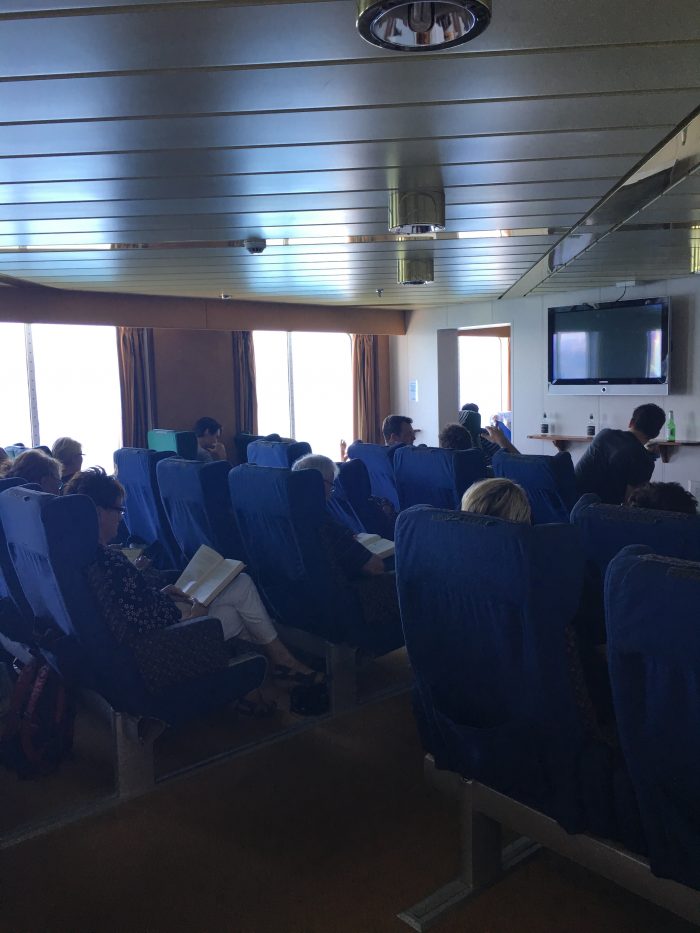 As we approached Wellington, I went back outside. Deck 7 had more outside space, although there was no seating. On a related note, in a New Zealand accent, “deck” sounds like “dick”.

On our way into Wellington Harbour we spotted a couple of small penguins out in the water. I wasn’t able to get any photos because I was so surprised to see penguins, but they are called little blue penguins & can be found off the coasts of New Zealand & Australia. Here’s an interesting article about the island the penguins inhabit in Wellington Harbour. 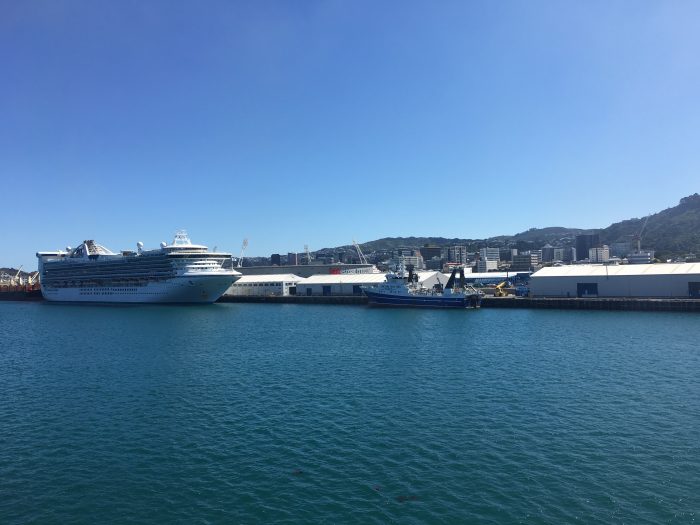 We arrived at the ferry terminal in Wellington, which is unfortunately quite a ways north of the city center. There was at least a free shuttle to the railway station, though even that is still on the northern end of central Wellington so I still had about a 20 minute walk after I was dropped off. 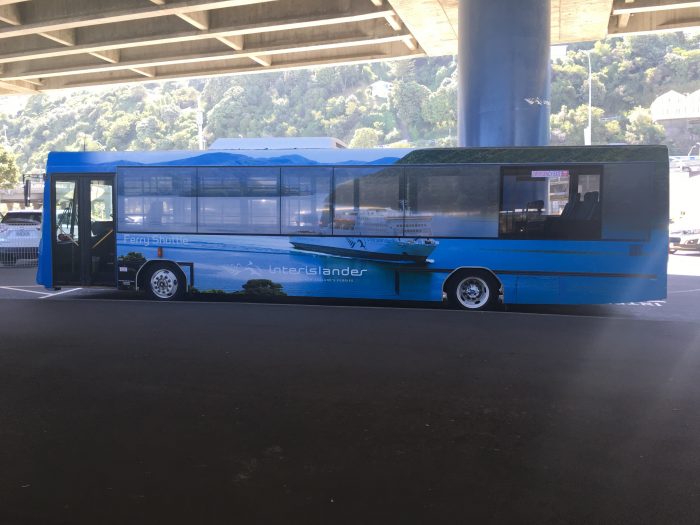 I ended up missing the first shuttle bus because my bag was one of the last ones out at baggage claim. Either it was a coincidence, or the first bags to be checked into the ferry are the last ones to come off. That’s not great, since the baggage claim process was not the fastest I’ve encountered (but at least it was faster than Cuba, so there’s that). After waiting for about 10 minutes longer, another shuttle bus arrived, and I was off toward my hotel in Wellington.