The easiest way to travel between Tallinn, Estonia & Helsinki, Finland is by ferry, at least for now. There are proposals to build a tunnel between the two nations, but that would take an remarkable engineering feat and many years of construction.

Estonia & Finland do have close ties even without a tunnel, so a couple of companies run ferries between Tallinn & Helsinki few times per day. The journey takes only about 2.5 hours, and tickets are as little as 19 Euros.

My ferry ride was on Eckero’s Finlandia, a ship that had more in common with a cruise ship than most ferries. 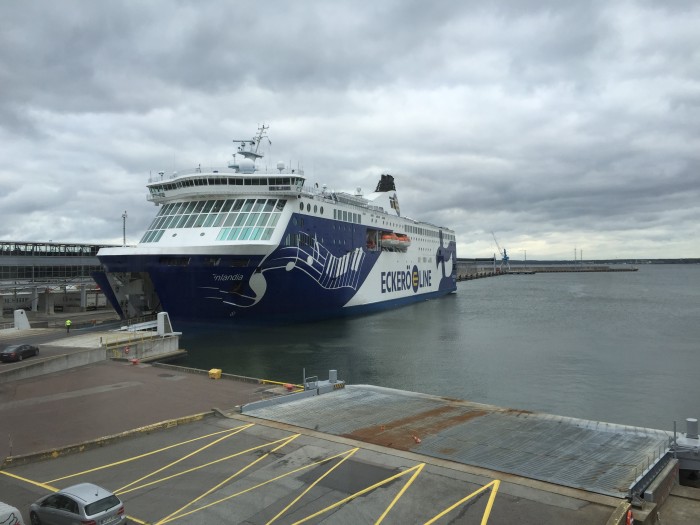 The ferry terminal in Tallinn is logically at the northern edge of the city, but it’s within walking distance of the Old Town. Passengers are expected to arrive a half an hour before the ferry departs, but this is because it takes so long to get to the ship’s entrance from the ferry terminal, plus you have to check in to get your boarding pass beforehand. 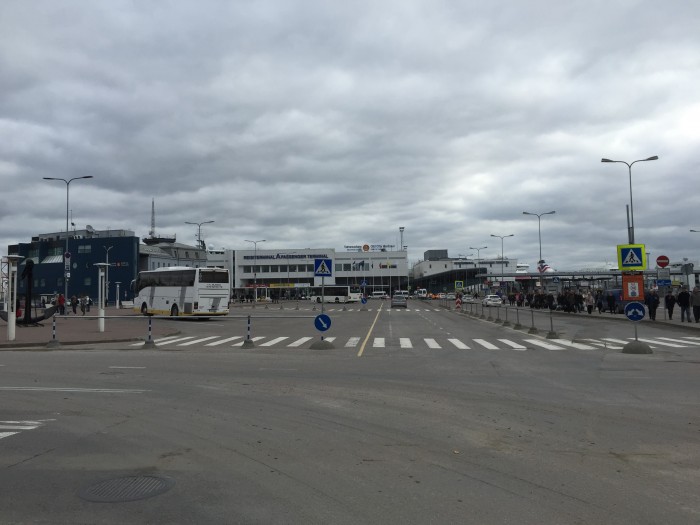 Once on board, you’ll be overwhelmed by what to do next. The ship has 9 decks total, 3 for cars, 2 for cabins. The rest of the ship is filled with observation decks & rooms, casinos, bars, and restaurants. 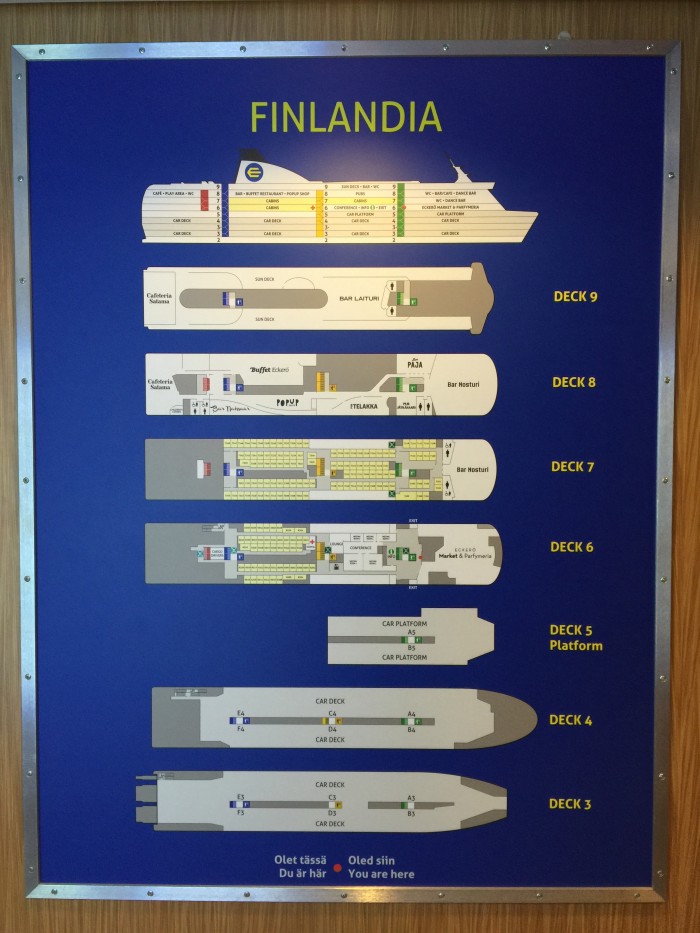 Upon arriving on the ferry, I found a set of storage lockers. I went to store my large suitcase, but they were all full by the time I boarded. Unfortunately, Eckero did not think to put a sign up telling passengers that there are far more lockers one deck up. I only discovered this fact when we were nearly in Helsinki. 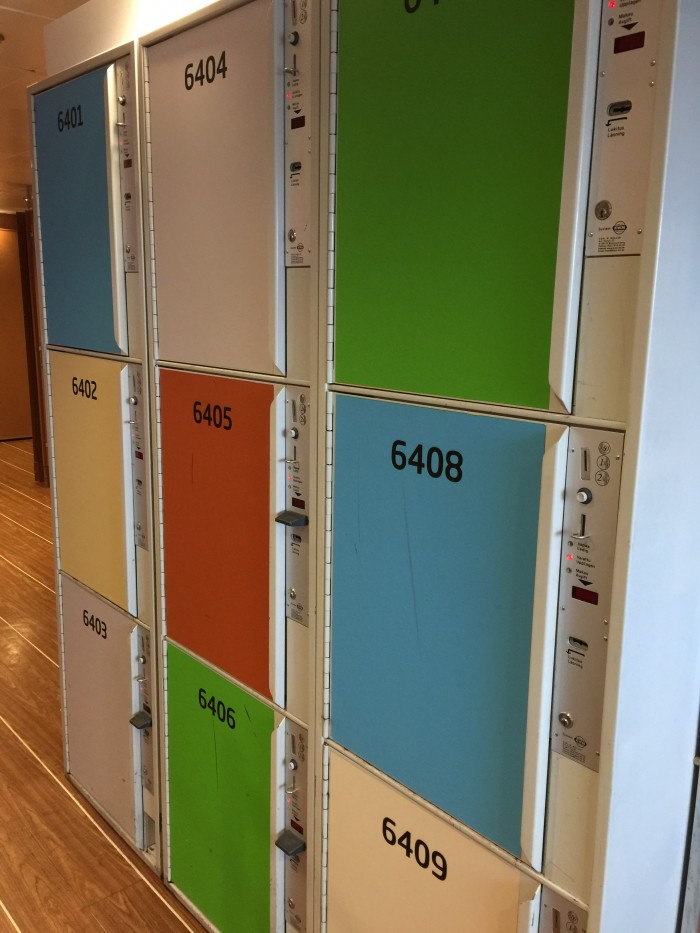 After boarding, I had some time to explore the ship before we departed. My first stop was the large duty free shop. There was plenty of alcohol available, including lots of tiny liquor bottles, though there were also signs saying that you weren’t allowed to drink your purchases on board. I have no idea how strictly this is enforced. I’m guessing not very, based on the status of many passengers. 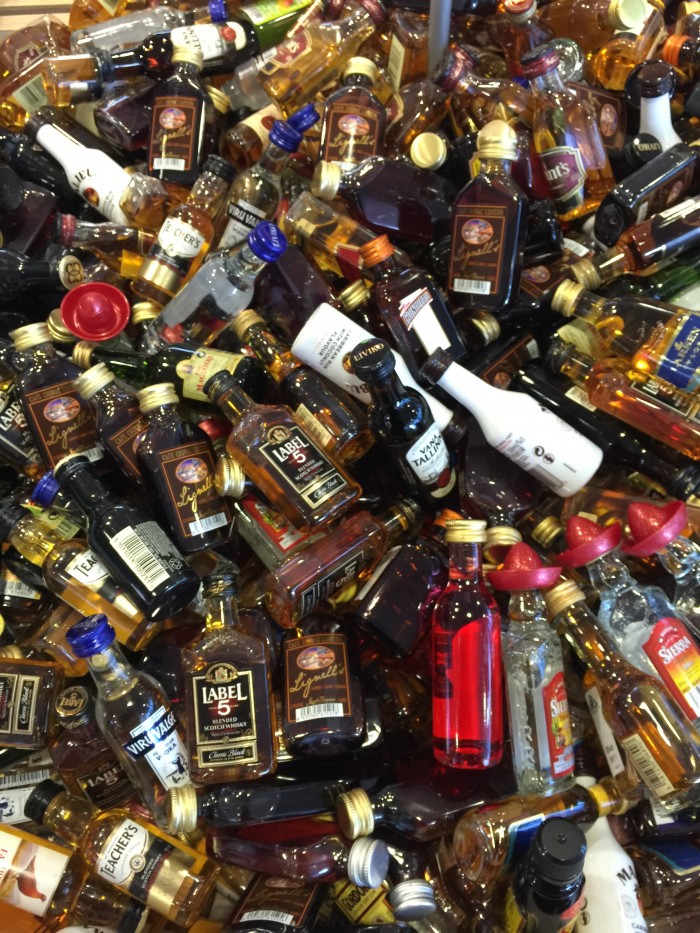 The information desk seemed to have more cigarettes than information. 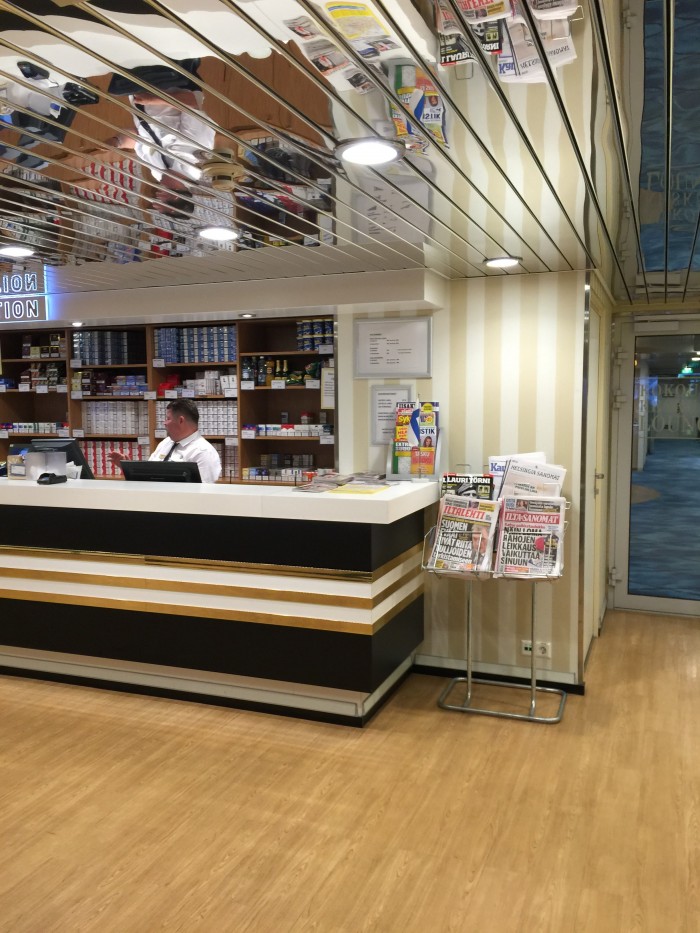 If booze & cigarettes don’t satisfy all of your vices, there are also gambling machines scattered through out the ferry. 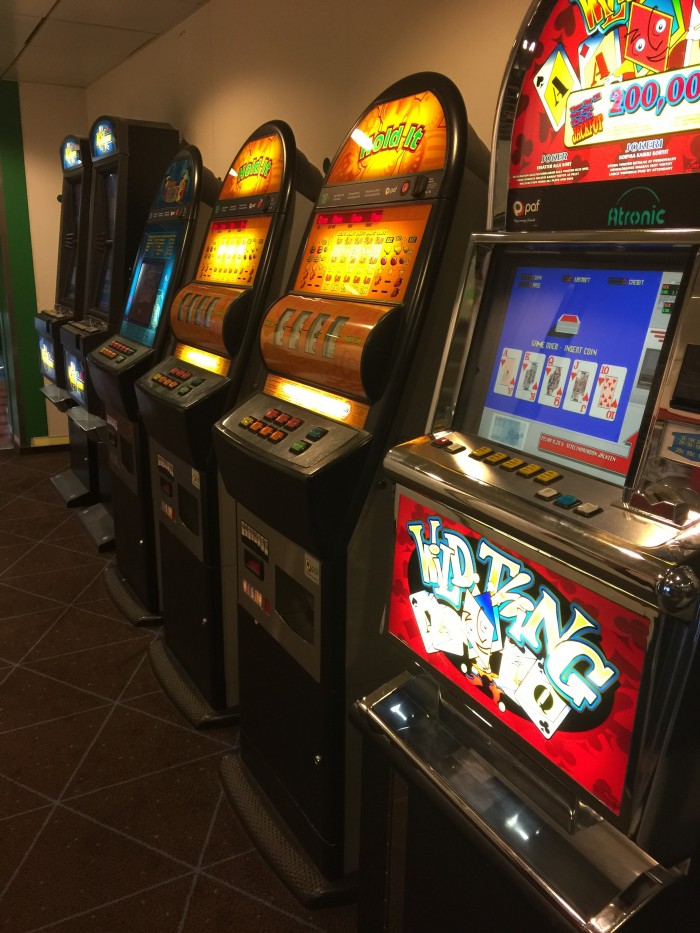 There are several bars & restaurants on the ship. If you’ve arrived especially hungry to the boat, there’s also a fairly expensive buffet. I wasn’t able to go in to see the food, but the food at the restaurants seemed sufficient enough. 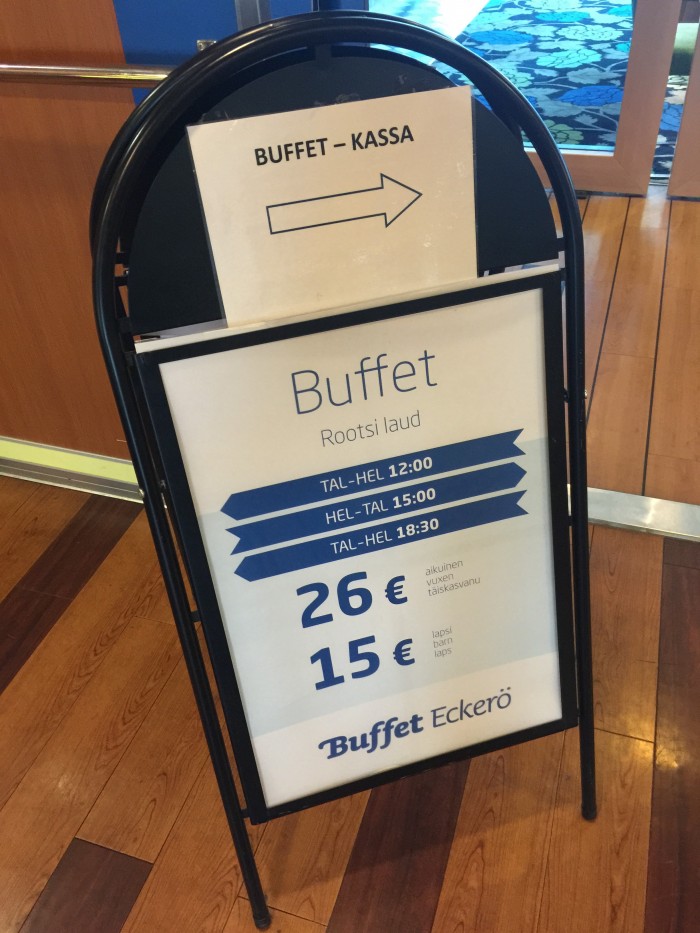 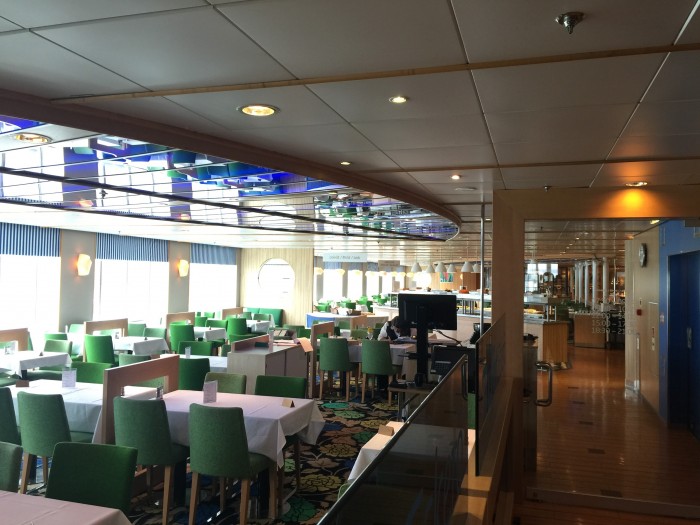 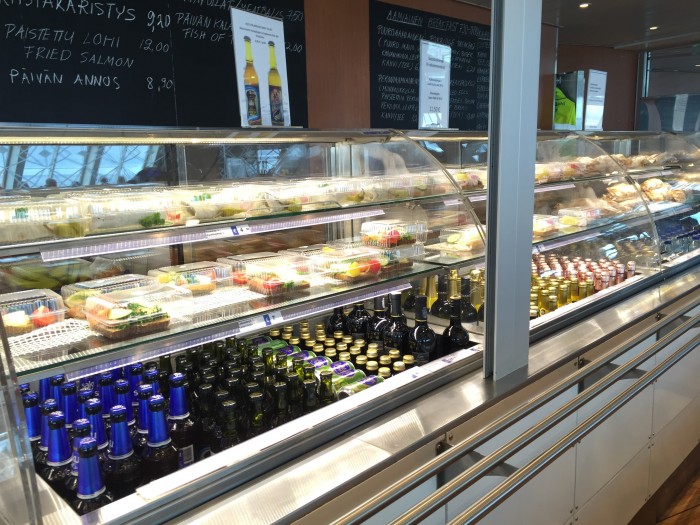 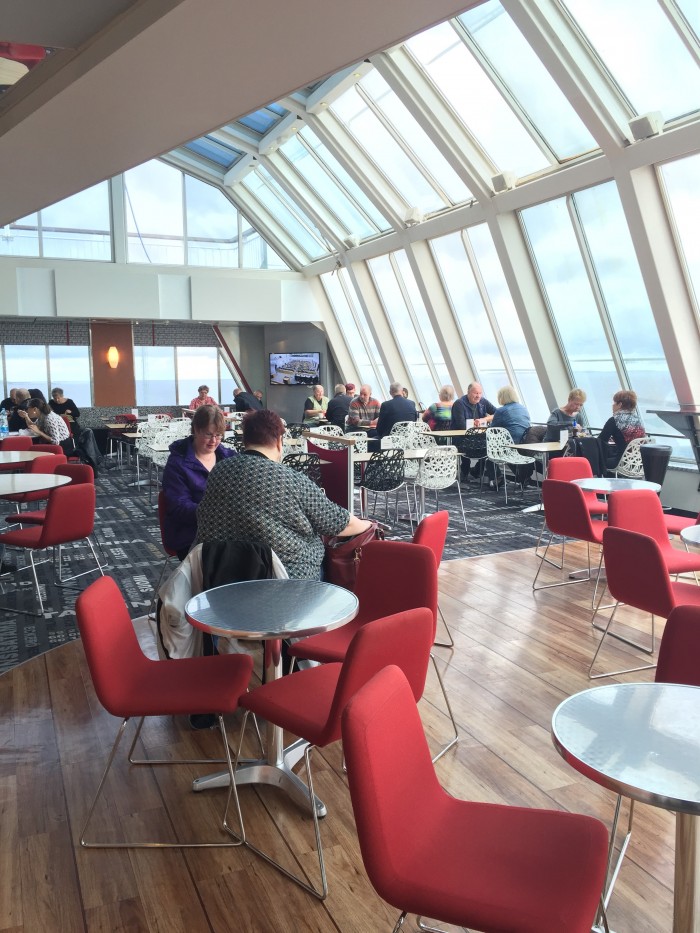 The Eckero MS Finlandia had observation decks & rooms to suit every desire. If you want to go out and get some fresh air (or smoke those cigarettes you bought at the cigarette information desk), there’s a huge deck at the top of the ship. Seating is a bit limited, but there were plenty of people outside, despite the day being fairly grey. I imagine it would be packed during the summer months, as there is a bar up on that deck as well, but it was closed on my journey. 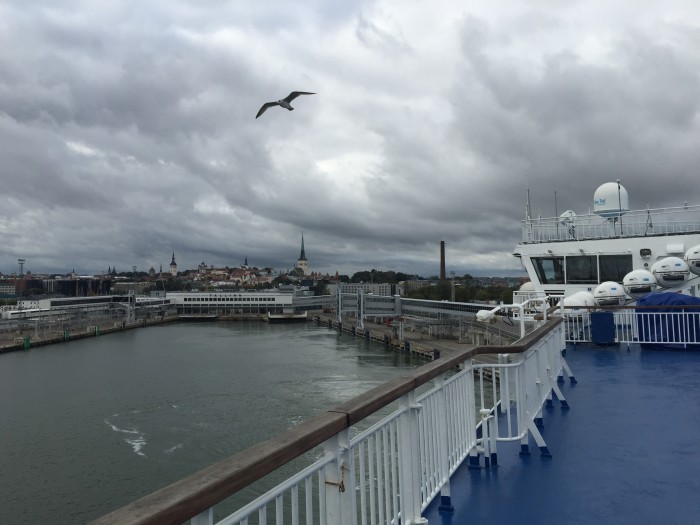 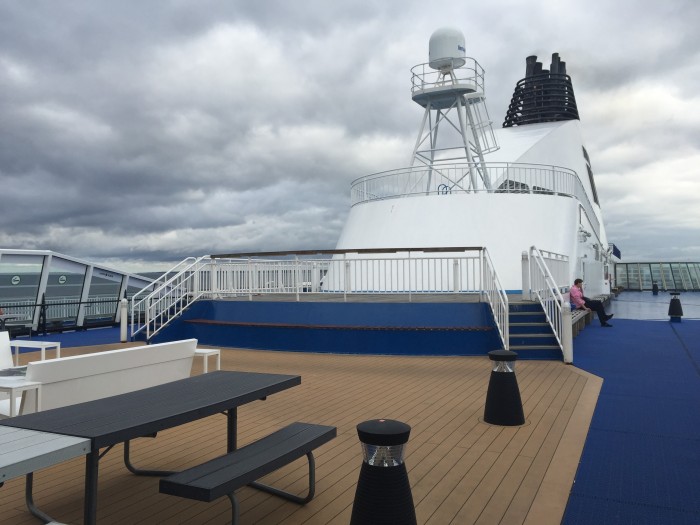 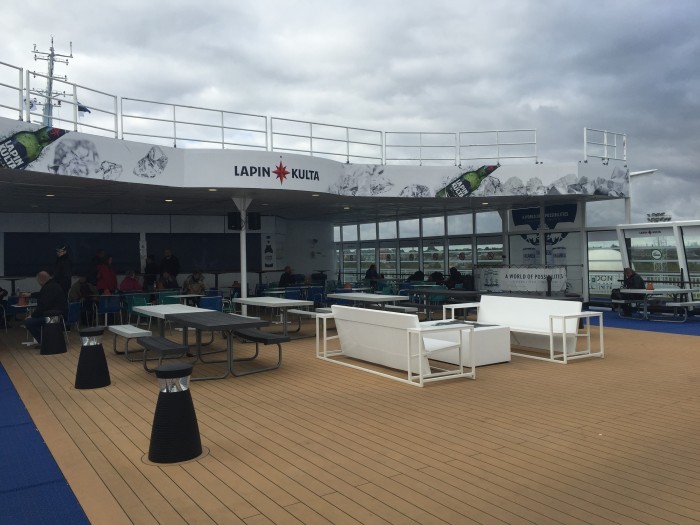 Inside, there are other large-windowed lounges. The main lounge also has a stage with live music. 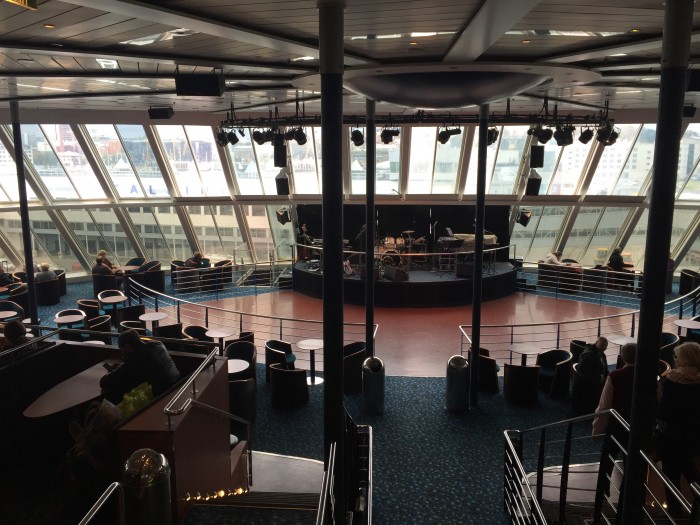 When I first sat down in the lounge after paying 3 euros for a pint of soda water, I thought that the stage might be something that is only used during the more crowded months. Boy, was I wrong.

I was treated to live music by an Estonian or Finnish cover band (sorry, I don’t know the languages, so if you do know, please leave a comment). The highlight: This rendition of  “City of New Orleans”.

Wandering around the ferry had taken up a fair amount of the journey from Tallinn, so I spent the last hour or so relaxing in the lounge. There was wifi, though it took a while for it to start working. One issue was the lack of power outlets. There were a handful scattered around, but they were all being blocked by people who had sat down next to them but weren’t even charging anything.

Soon we started to see land as we began to pass some of the islands of southern Finland, including Suomenlinna. We arrived at the Helsinki ferry terminal, which is located in the southwestern part of the city. There is a light rail line right outside the ferry building though, so it’s easy to get into central Helsinki from there.

The ferry from Tallinn to Helsinki is a pleasant journey, and a great way to get between the two cities. You could even do it as a day trip if you didn’t have enough time to do full trips to both places.