Sevilla, Spain is filled with history. Buildings hundreds of years old line the narrow, winding streets of the Old Town. But then suddenly, spanning a prominent road at the Plaza de la Encarnación, there is something completely different: the Metropol Parasol. Known locally as the Setas de Sevilla or Setas de la Encarnación, this wooden mushroom-shaped structure is a divisive-but-iconic image of Seville, with city center views from the top to match. And it will also make you hungry for waffle fries. 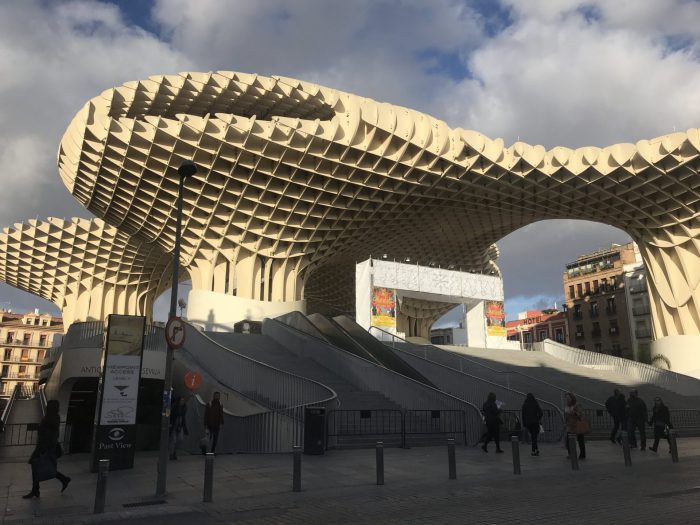 Until 1973, Plaza de la Encarnación was the home of a market. The building was demolished & the market shifted to a corner of a property, but the rest of the area sat dormant for decades. In the 1990s, construction began on an underground car park, but work was quickly stopped. During that work, Roman & Al-Andalus ruins were discovered. The historical discovery halted construction so archaeological work could be undertaken. However, the project was never restarted.

In 2004, Seville decided that the area should finally be revitalized. A competition was held to generate ideas, with the winner changing the skyline of Sevilla forever. German architect Jürgen Mayer designed a series of six mushroom-shaped parasols that would comprise one of the largest wooden structures in the world, spanning approximately 150 x 70 meters. The design of the Setas de Sevilla (“setas” meaning mushrooms in Spanish) is inspired by the Sevilla cathedral & neighborhood ficus trees. 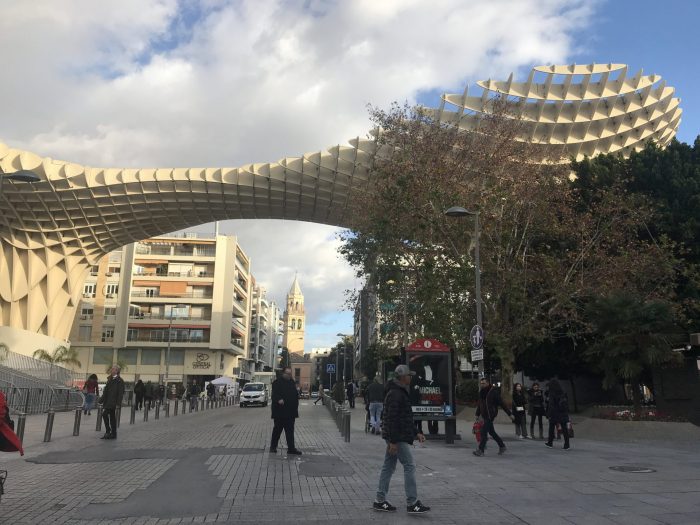 The project was controversial from the start. Many thought that the modern design of the Setas de Sevilla was too different from the historic neighborhood around it. Others thought it was too expensive, and this was before the eventual costs doubled to nearly €100 million. In time, perception has warmed, though there are still many who think the Parasol is ugly.

Construction of the Metropol Parasol took years. When construction started in June 2005, the project was estimated to take 2 years to complete. Due to engineering delays with the wood materials, the Setas de Sevilla did not open until 2011.

The completed structure is made from 3,500 pieces of Finnish pine wood, connected by 3,000 knots, 16 million screws, and a lot of glue. The wood is comprised of microlaminated layers, which provide the necessary strength. Two concrete pillars provide most of the support for the parasols. This design that allowed for the protection of the ruins below. 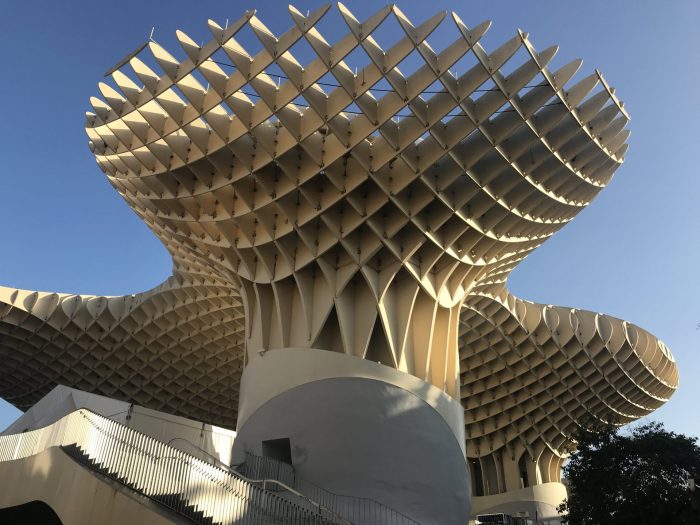 The multilevel complex at Plaza de la Encarnación now includes the Setas de Sevilla, a market, several bars & cafés, and an underground museum with the preserved ruins called the Antiquarium. 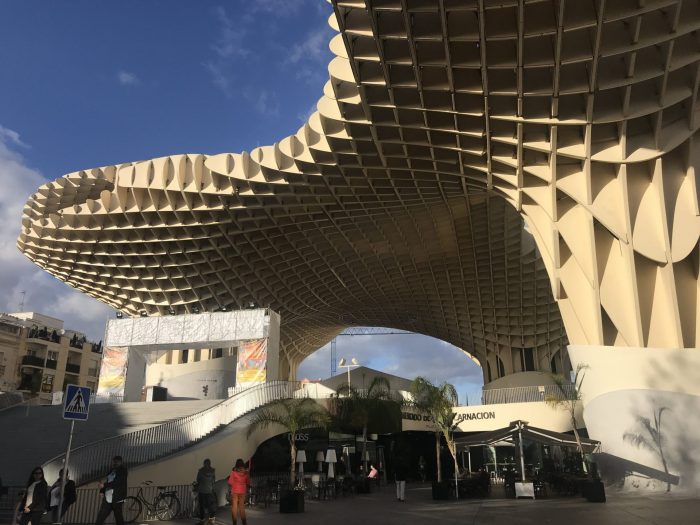 How to visit the Setas de Sevilla

You can of course visit the Setas de Sevilla for free at the plaza level. The honeycomb structure provides much-needed shade on hot Seville days. There’s a market, as well as other shops and restaurants. For many, that view of the Parasol from below is enough, but there is also an observation deck at the top of the Setas with fantastic views across central Sevilla. This visit is a popular stop on many walking tours of Sevilla, and there are even virtual reality enhanced tours of the Setas available.

Tickets to the top of the Seville Parasol are €5, up from €3 when I visited, which includes a free drink at one of the bars in Plaza de la Encarnación. Entrance is free for Sevilla residents or those who were born in the city.

The best time to visit the Setas de Sevilla is during the Golden Hour. The setting sun adds to the depth of the Parasol and illuminates the surrounding city. 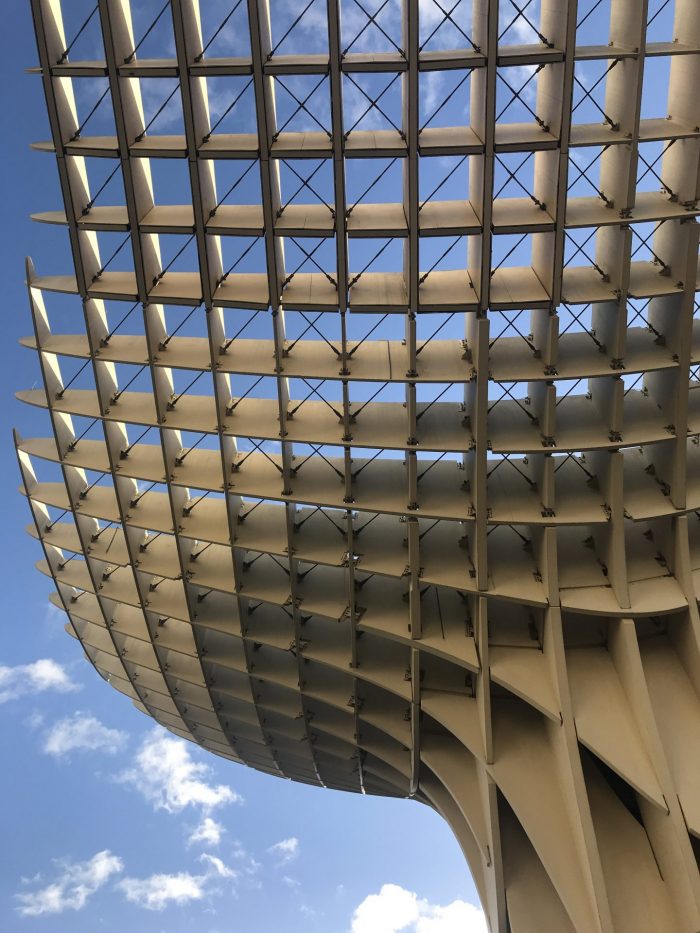 On the day of my visit, there was a short queue for the elevator to the Setas de Sevilla mirador, but it was only a minute or two.

The elevator opens up to a patio with a bar & café, though it’s not always open. The free drink ticket is not usable here (though the voucher could still have been traded for €1 off), presumably to encourage people to drink at the lower bar & not at the one with the great views.

There is a 250-meter long skywalk that winds its way across the Setas de Sevilla, rising and dipping along with the mushrooms. While the Parasol isn’t super high (26 meters at its tallest point), it’s tall enough to be above most nearby buildings, which is really all you need. That’s just fine if you’re someone who is not a fan of heights. The views from the path include the Sevilla Cathedral and Real Alcazar. 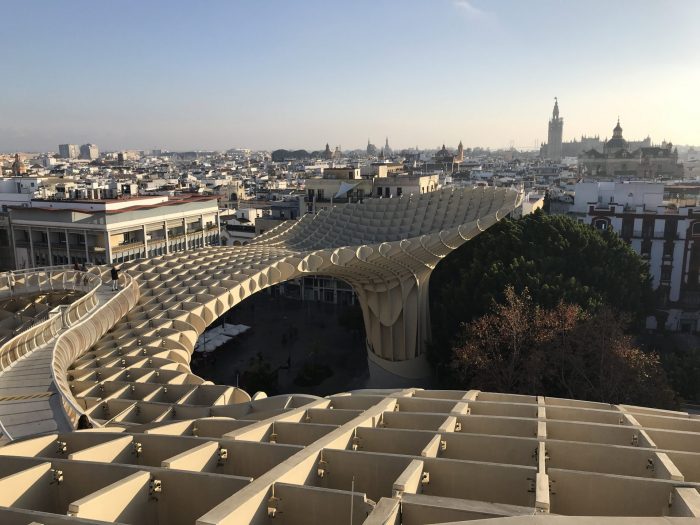 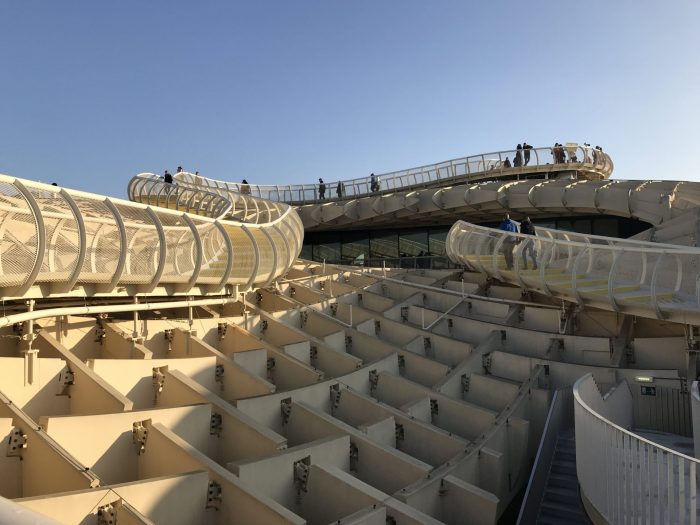 As you follow the path, there are signs detailing the notable buildings around the Sevilla city centre. There are also information signs about the construction of the Parasol itself. The signs are in Spanish, so use the Google Translate if you need. 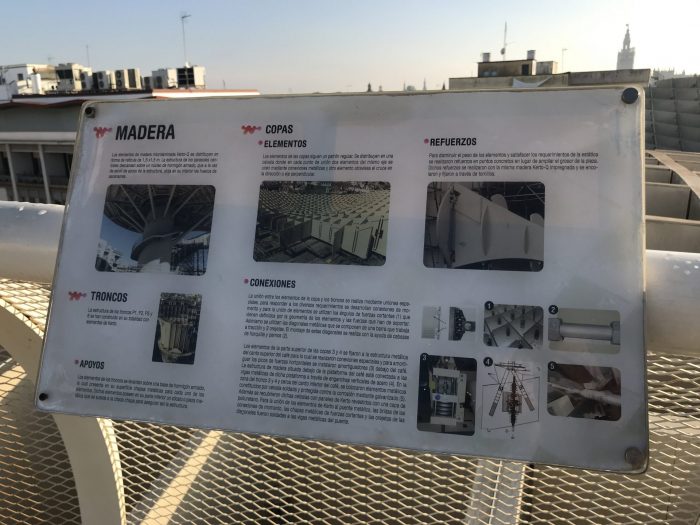 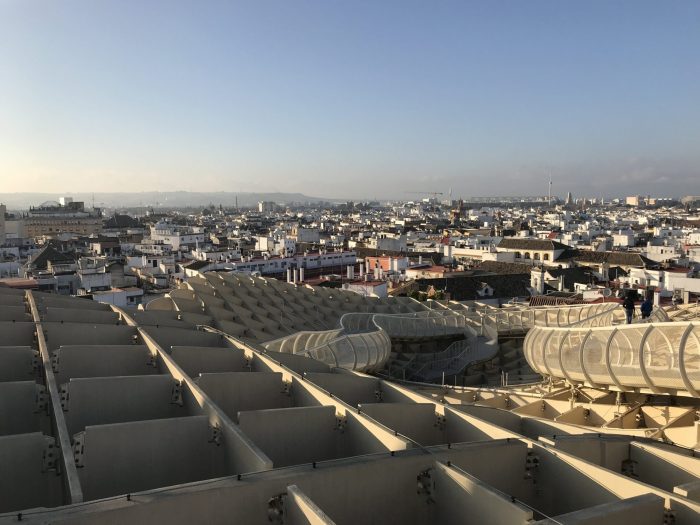 After walking around the Setas de Sevilla, it was time to get my free drink in Plaza de la Encarnación below. The voucher was for Ceverceria La Sureña, a fast food-style tapas bar with beer, wine, and red wine cooler. I opted for the latter, since it was something different.

The Antiquarium at the Setas de Sevilla

Below the Setas de Sevilla, there is another notable attraction. As mentioned above, historic Roman ruins were discovered during the work on Plaza de la Encarnación. While the archaeological work delayed the eventual refurbishment of the plaza and construction of the Parasol, these ruins have now been preserved in what is called the Antiquarium.

For an admission fee of around €2, you can visit the museum to get a closer look at the Roman ruins. You can also take a free peek through the windows. The ruins include Roman houses, streets, a salting factory, tile mosaics, and more, as well as an Islamic house from the 12th-13th century. 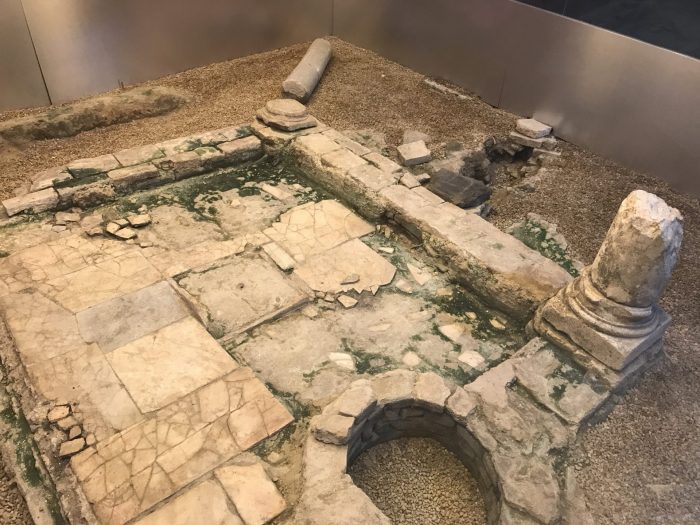 Visiting the Setas de Sevilla observation deck is a cool way to get a different view of Seville. It’s not a bad value, especially with a drink at the end (though it used to be better when it was just €3!). The complex combines historic and modern architecture as a shining highlight of the city.

Here are some great Seville tours & other things to see & do in the city.

If you’re looking for a place to stay, check out these Sevilla hotels.