The previous day had been clear and sunny, but still cold. On my final day in Bruges, the crisp, clean air was replaced by some of the densest fog I have ever seen. Since I had walked through much of the city already, I didn’t mind getting to see it in a completely different way yet again. 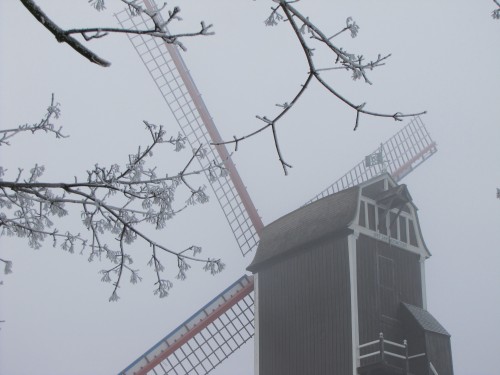 My first plan was to visit the Brouwerij De Halve Maan, but I arrived only to find it closed. I instead headed to the Market Place, which had a full farmers market up and running despite the cold. I needed something warm to eat, so I bought an order of rotisserie chicken with bacon potatoes from a food stand called Kippenhandel Heindryckx. They were all the deliciousness you would expect them to be. After eating while listening to a full concert of bells from the Belfort, I backtracked south so I could see some areas I had not yet been to.

There hadn’t been any new snow overnight, just the fog that had rolled into an already cold city. The resulting frost coated the trees and paths, as if they had been sprayed with liquid nitrogen. 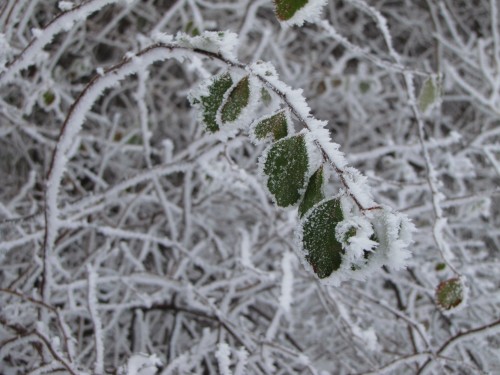 I followed a path along the canal that rings the southern part of the city. It’s a nice green area, or at least I assume it would be when it’s not covered in ice. Aside from the occassional dog walker, it was desolate. 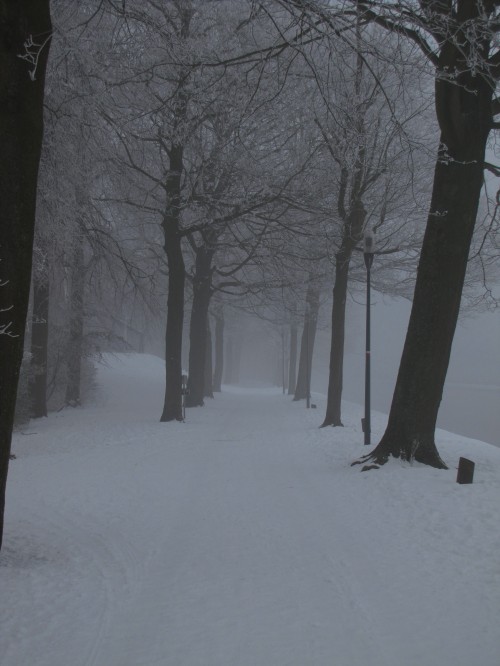 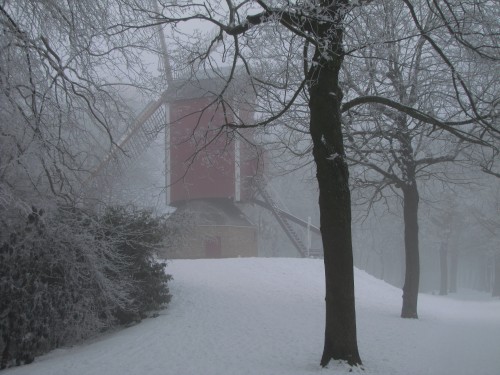 At one point, a boat passed along the canal slowly, breaking through ice that had formed on the top. Since this canal was larger, it still saw enough traffic to be somewhat clear, but that was not the case with every canal.

One dead-end canal, in the northern part of the old city near Jan van Eyckplein, was covered in much thicker ice. So thick in fact, that it could easily support a bicycle. 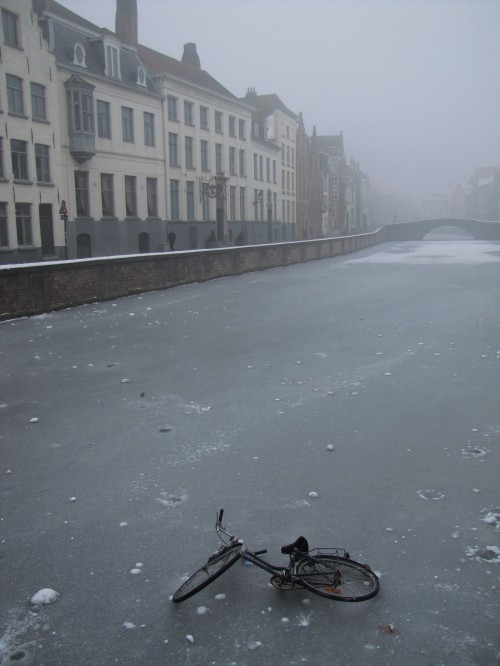 I wondered the story of how this bike had ended up here. Was it just some kids playing it around? Was it someone frustrated with a broken bike? Whatever the case, it made for one of my favorite photos I have ever taken.

Nearby, there is a statue of a bear. Legend has it that this bear was the first resident of Bruges. The rest of the day, I then imagined a bear wandering the narrow, icy streets of the city.

Heading back south, I realized I still needed to make a visit to the beer bottle shop the bartender at De Kelk had told me about. It’s called De Biertempel, and it indeed lived up to the hype. The woman who ran it was super friendly (with the weather being so bleak, I may have been one of the only people who had stopped in all day), spoke excellent English, and was eager to talk beer. This was where I bought my bottle of Westvleteren 12, along with a couple of few other nice selections.

The afternoon was getting later, and I realized I hadn’t eaten in a long time, so I headed back to Bierbrasserie Cambrinus, which was very close to De Bier Tempel. This time, I had what they call the “Menu of the Brewers”. At 30 Euros, it’s not cheap, but with my long trip winding down, I decided to splurge. Once again, the food was not disappointing. The three courses consisted of Trappist Cheese Croquettes, Flemish Carbonades prepared with “Gulden Draak” Beer, served with Applesauce, and Crème Brûlée perfumed with the dark Abbey beer of Ename. Plus, of course, beer.

With that, my trip around Europe would be almost done. I flew from Brussels to Glasgow the next day, where I would spend a few days reuniting with friends from when I went to school there. After that, I was off to Manchester, where I spent a few hours exploring (highly recommended: the People’s History Museum – a museum covering the social history of Britain) before flying back home the following day.

My trip was a success. I went back to places I hadn’t been in a very long time and discovered a whole new love for them. I traveled around continental Europe for the first time during the winter and saw it in its icy, snow-covered glory. I crossed many tiny nations off my list. I walked. A lot. I ate a lot of great food, and I drank a lot of great beer. What more can you ask for from a trip?