One visit to Japan, and you’ll realize just what you’ve been missing out on when it comes to sushi. The fish is fresher, the preparation is of higher quality, and the cost is less. Even sushi from the cheapest conveyor belt restaurants is better than most sushi you’ll find elsewhere in the world, even if you go to some high-end places that might charge hundreds of dollars. However, as much sushi as I’d eaten on my trips to Japan, I’d never done a proper omakase sushi experience before. Omakase is when you leave your ordering decisions up to the chef. It’s a showcase for the chef & the restaurant to show off their skills & quality of ingredients. But just how good can a sushi meal be in Japan when you spend a bit more? For my first omakase in Japan, I chose to go to Manten Sushi Marunouchi in Tokyo. 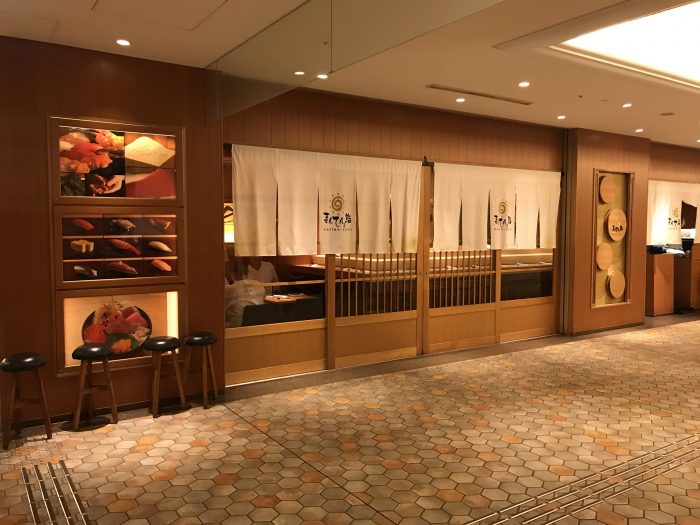 Getting a reservation at Manten Sushi

As with anywhere in the world, omakase sushi can be as expensive as you want it to be. There are restaurants run by legendary sushi chefs that charge the equivalent of hundreds of dollars. Many times, these small sushi restaurants require reservations that can only be made in Japanese & by calling.

I decided to go to Manten Sushi Marunouchi for two reasons. The first was that Manten Sushi has a reputation for having perhaps the best value for omakase in Tokyo. There are some cheaper omakase spots where you leave hungry, but for just 6000 yen (around $55 USD), Manten Sushi provides a full meal that fills your belly. I had no problem splurging for a nice meal, but I didn’t want to have to find something else to eat afterward. 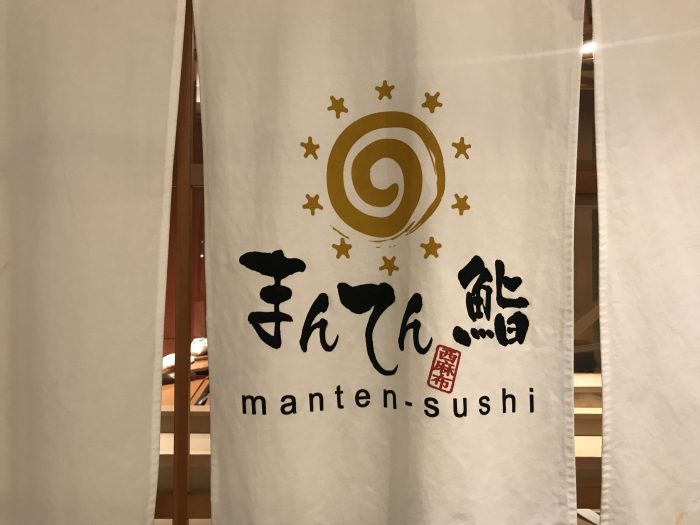 Second, reservations for either Manten Sushi location can be made online. This allowed me to use Google Translate to be able to figure out what exactly I was doing, while easily finding availability when I wanted it. There were still reservations available a few days beforehand, so it’s not necessarily a place you need to book months in advance.

There are two Manten Sushi locations, Marunouchi & Coredo. Both are within walking distance of Tokyo Station. The Marunouchi location is in a basement of a shopping & office complex. The outside courtyard reminded me of London. 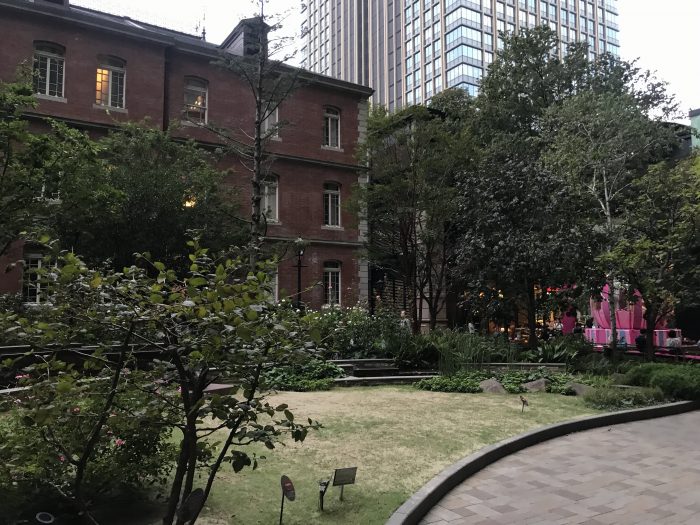 Since I knew I would be jet-lagged, I had booked the earliest reservation that I could. The restaurant opened promptly at 5. I was seated, then offered a drink. I went with sake, of course. The sake was from Niigata, a region I was going to be visiting later on my trip, where I went sake tasting in Yuzawa. 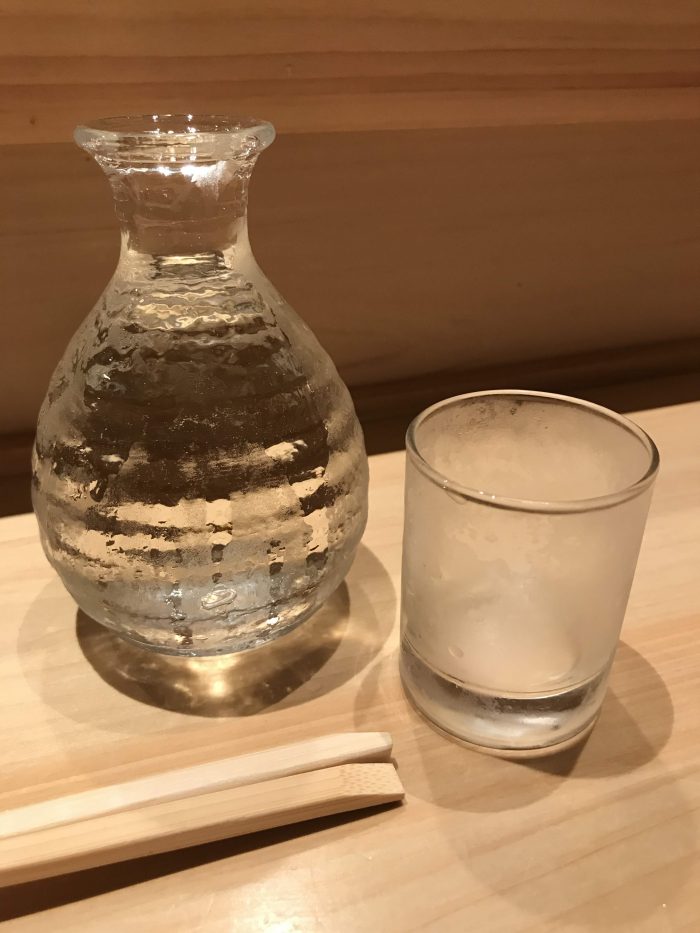 The counter seats just 14 people, with a couple of tables also available for larger groups. I love being able to watch everything be prepared in front of me. 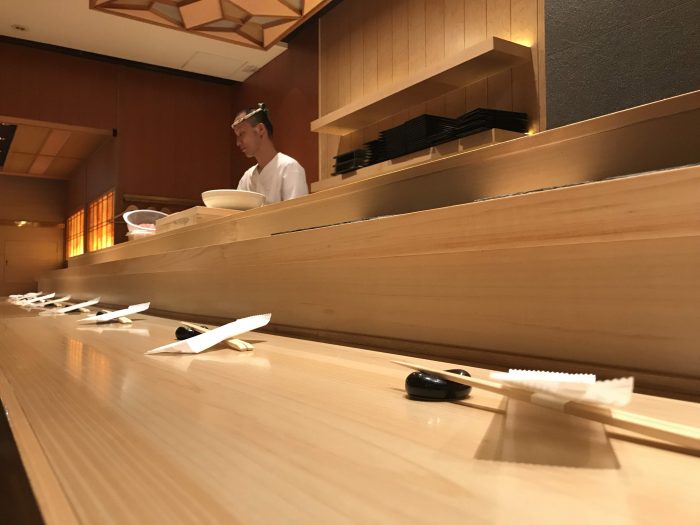 The chef asked me if I’m okay with everything. Sure, why not? There might be some varieties of fish or seafood that I’m less excited about, but I’m at least willing to try them, especially in an omakase setting where they’re trying to show off the best that they can offer.

Then, the courses began! The chef did tell me what each item was in English, though this did limit the descriptions somewhat. I’ve included most, but not all of the dishes here.

First there was a small crab soup. 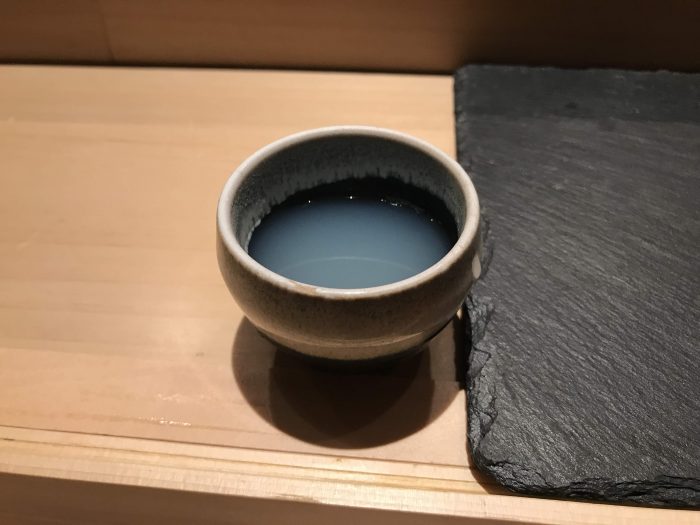 Next was some amberjack. 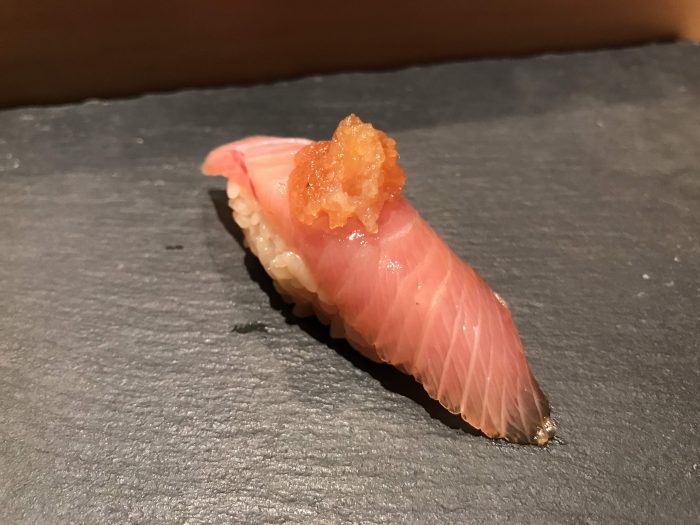 This was followed by seaweed salad. It was unlike any other that I’d ever had. It was slimy, in a good way, which resulted in an expert level chopstick challenge. 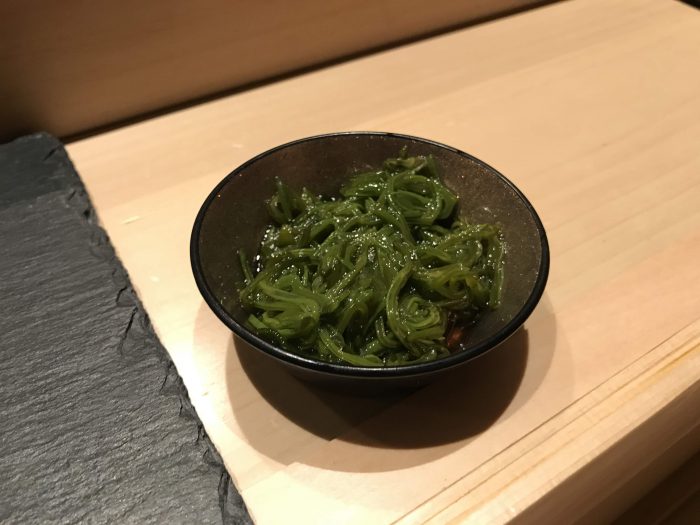 Then it was time for some octopus, which was lightly-salted & excellent. 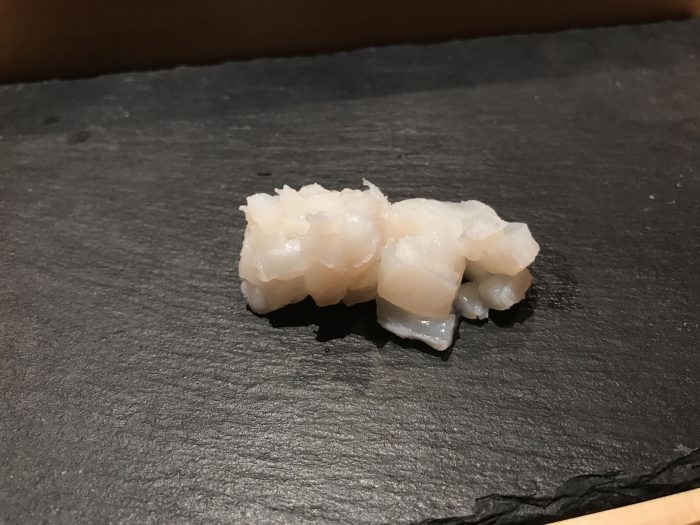 That was followed by bonito, which melted in my mouth. 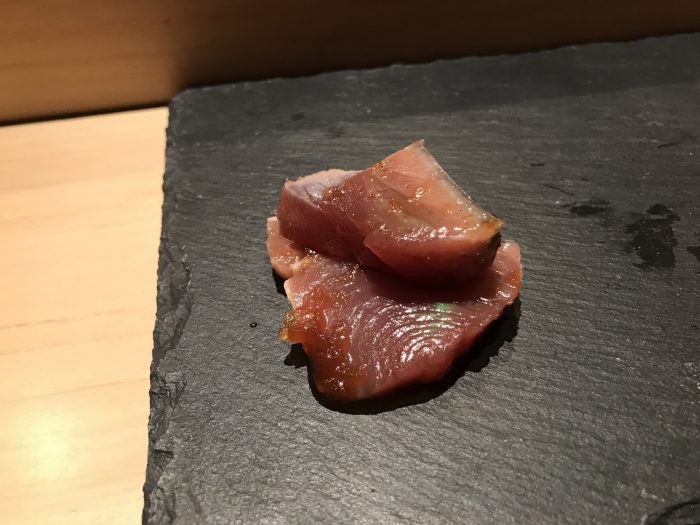 Even the pickled ginger was fantastic. It has a lightly sweet flavor with a nice crunch none of that rubbery pink junk you find at most sushi restaurants. 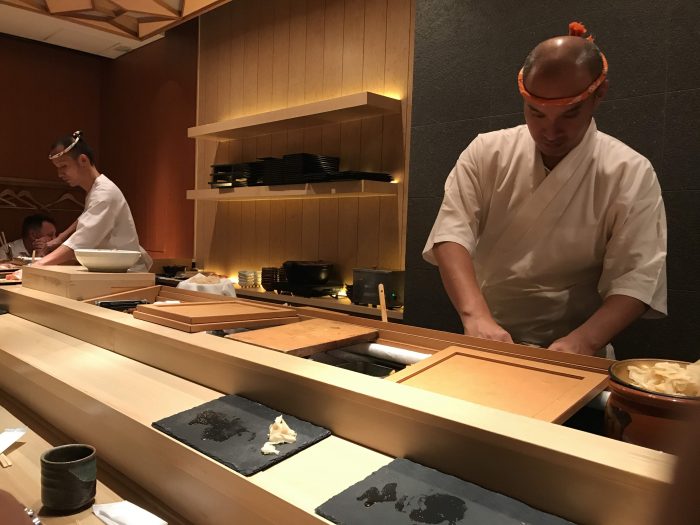 The mackerel was also delicious. 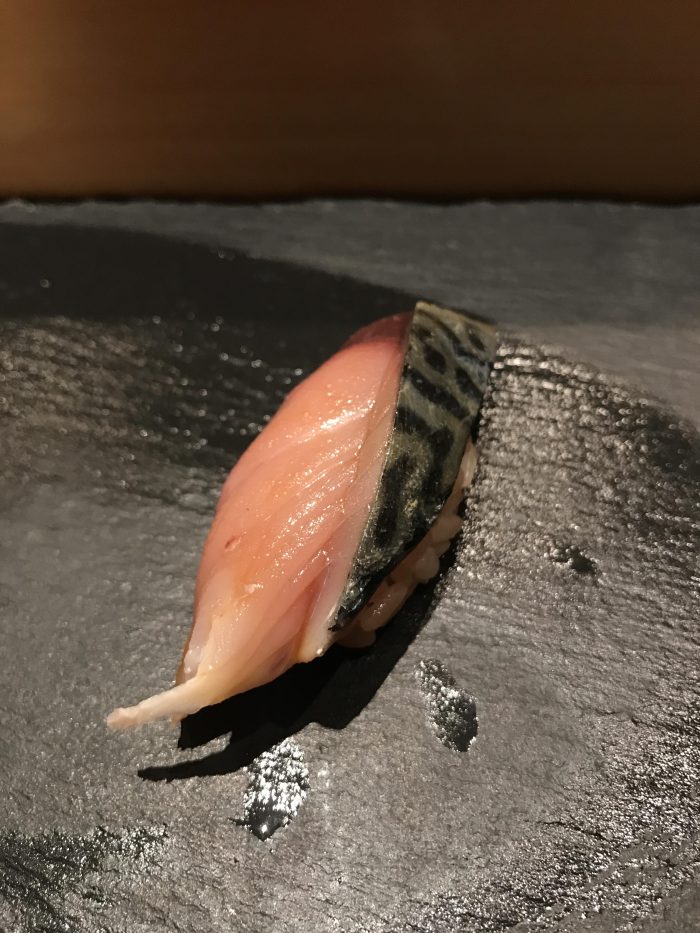 And then it happened. An absolute curveball. The next dish was a tomato. 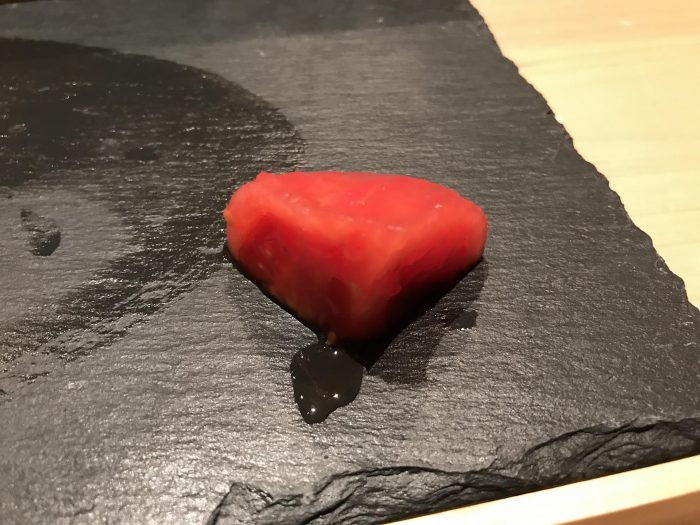 Tomatoes are my nemesis. I detest their texture. I generally refuse to order or eat whole tomatoes. It had never occurred to me that when the chef asked me if I was okay with everything, I might need to consider tomatoes. But here I was, with a giant chunk of tomato presented to me as part of my omakase at Manten Sushi Marunouchi. I contemplated “accidentally” dropping it on the floor & blaming a lack of chopstick expertise.

But then I figured I would power through and give it a shot. I’m glad I did.

The texture wasn’t bad, thanks to this tomato being mostly solid. It was still soft, but it wasn’t oozing. The flavor was absolutely stunning. Dare I say, I liked it a lot. And if other tomatoes were anything like this one, I might actually eat them every now and then.

After the tomato, it was time for some abalone. It wasn’t my favorite item, but it was fine. 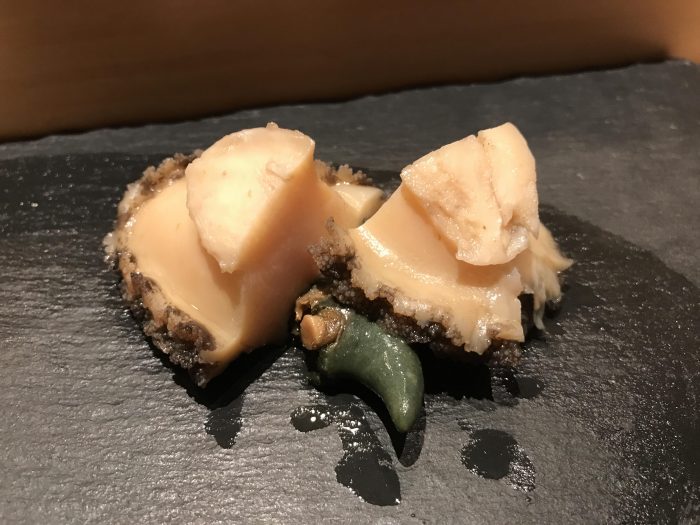 Next, a bit of a break from the sushi with some chawanmushi (egg custard with crab meat). 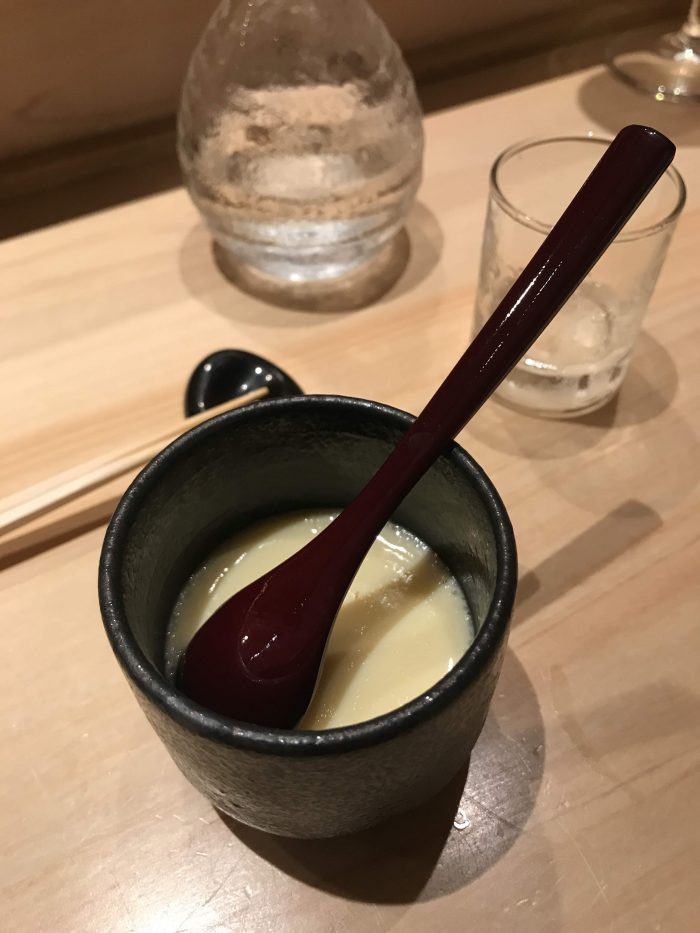 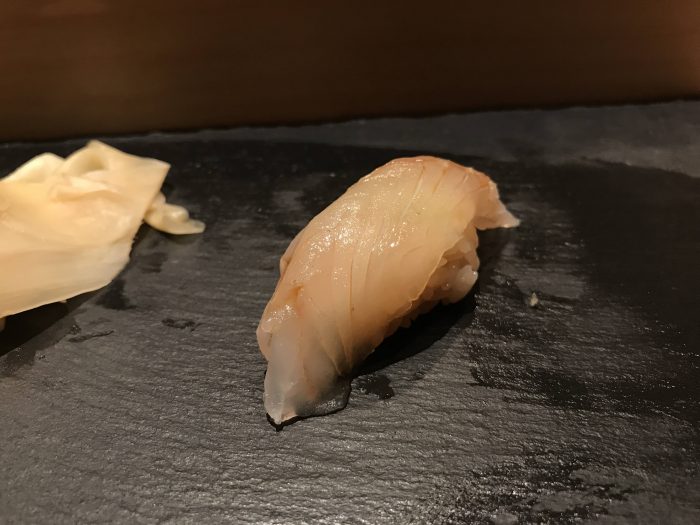 Then there was wasabi leaf. 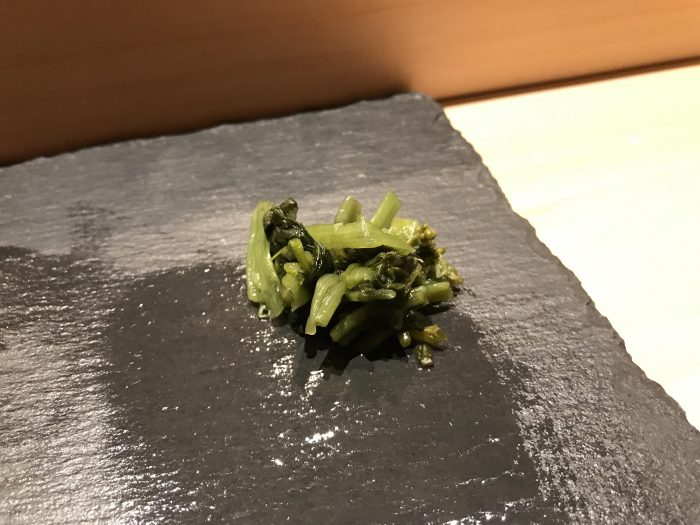 Next up was tuna. 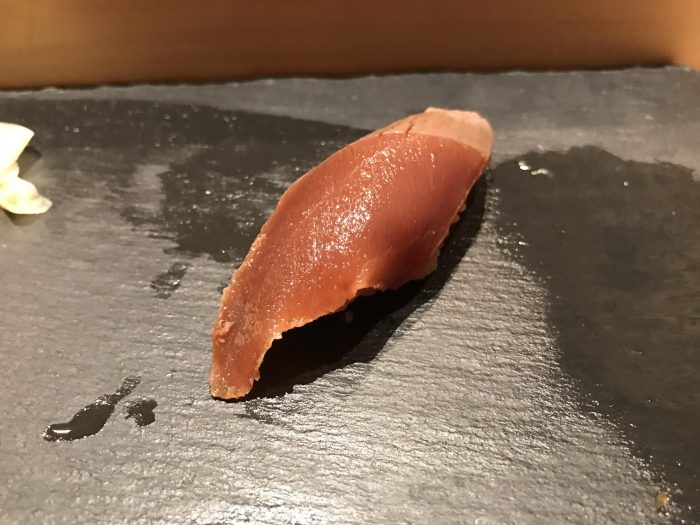 Then it was time for some boiled peanuts. They were much better than the ones that someone had once brought me from Georgia, perhaps because they didn’t have a musty flavor from being in a plastic bag for who knows how long. 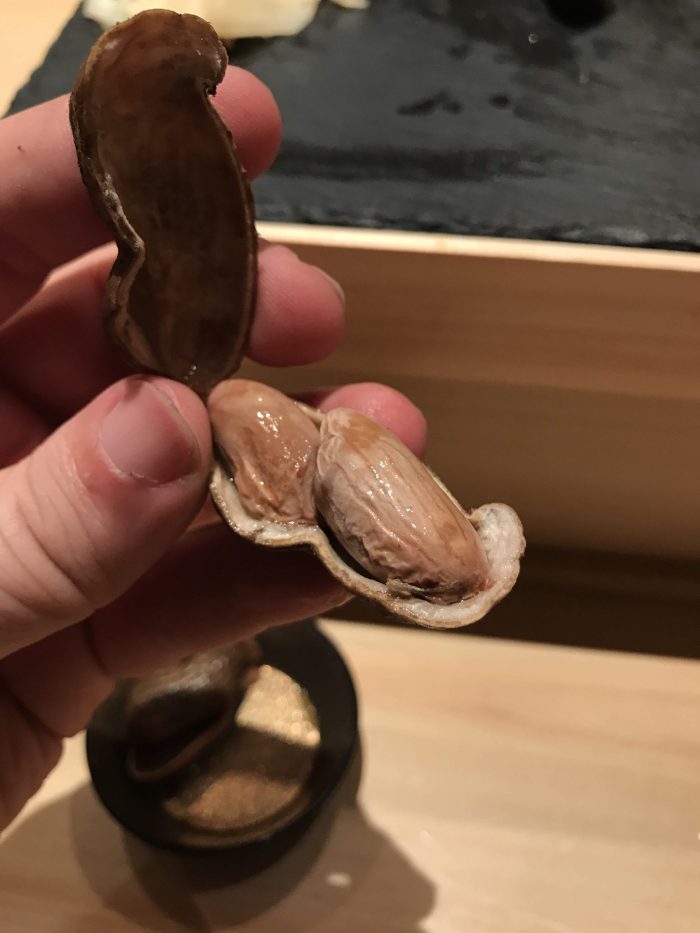 Then it was time for more tuna this time otoro along with grilled toro. 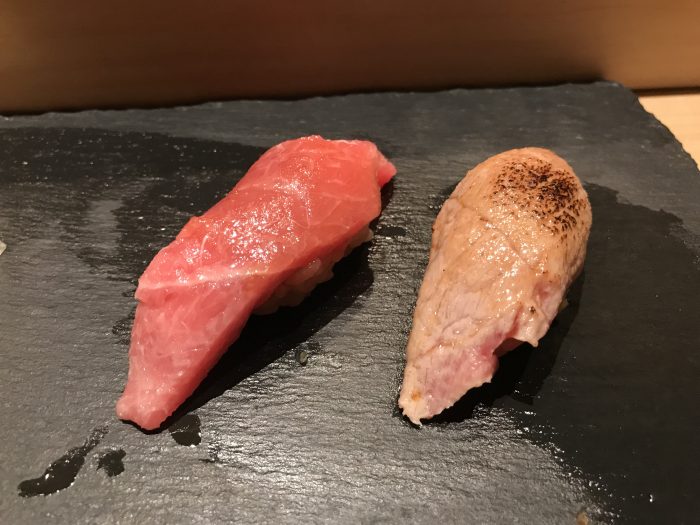 This was followed by a special tofu. It was so soft & creamy, like no tofu I’d ever had before.

After that, there was some white shrimp. 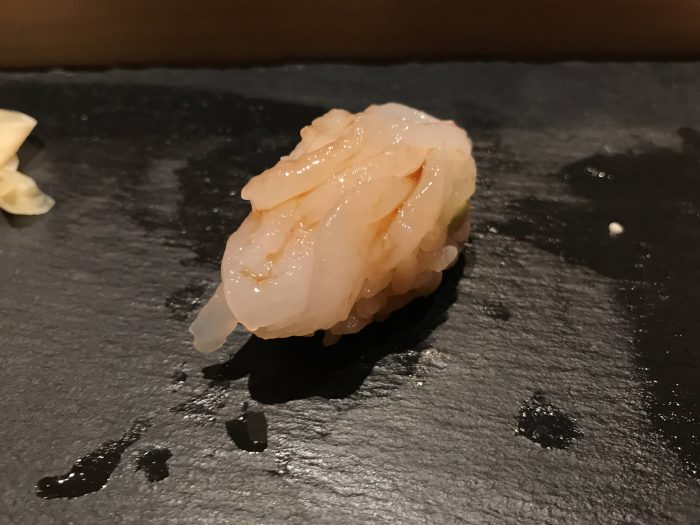 Things got fun after that. The chef asked me to put my hand out. He laid a sheet of seaweed on top of it. This was then topped with rice & uni. He told me to roll it. This was one of my favorite dishes of the meal, thanks especially to my expert preparation. 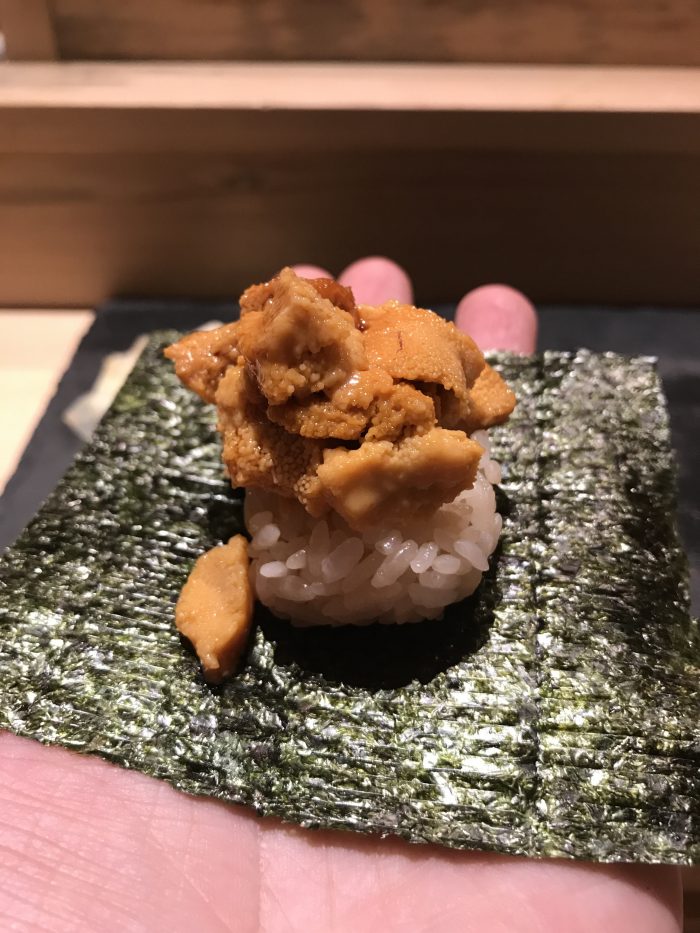 Baby sardines were the next dish. I can’t say they were something I’d go out of my way to have again, but they were certainly different. 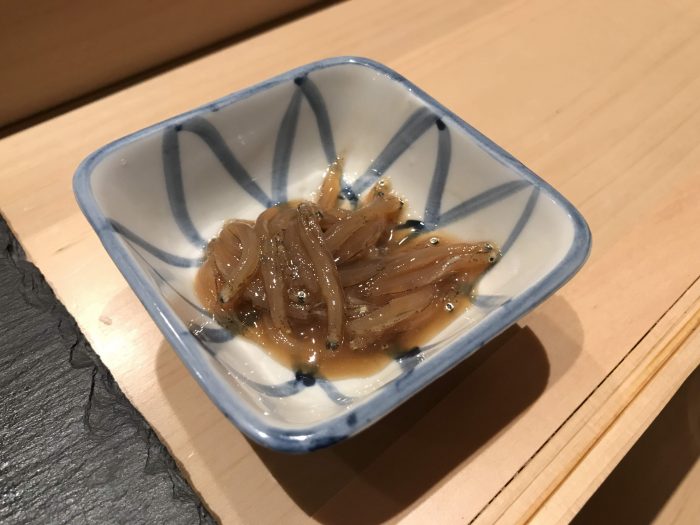 The sardines were followed by salmon roe over rice. This required more expert-level chopsticking, but it was totally worth the effort. 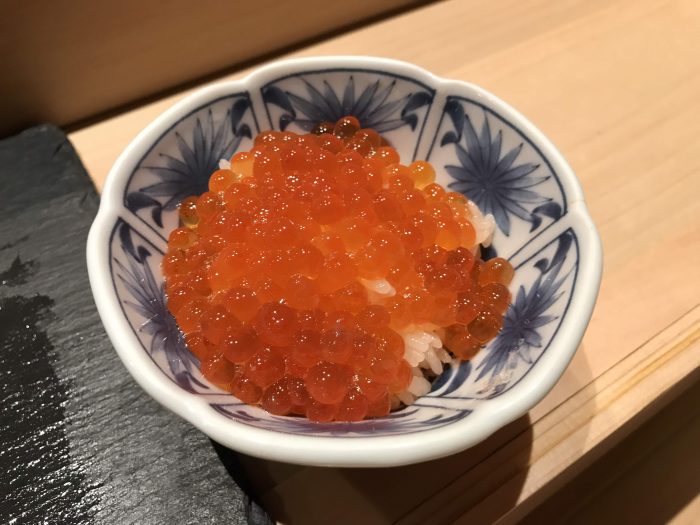 Then it was time for miso soup. The bowl was filled with tiny clams. 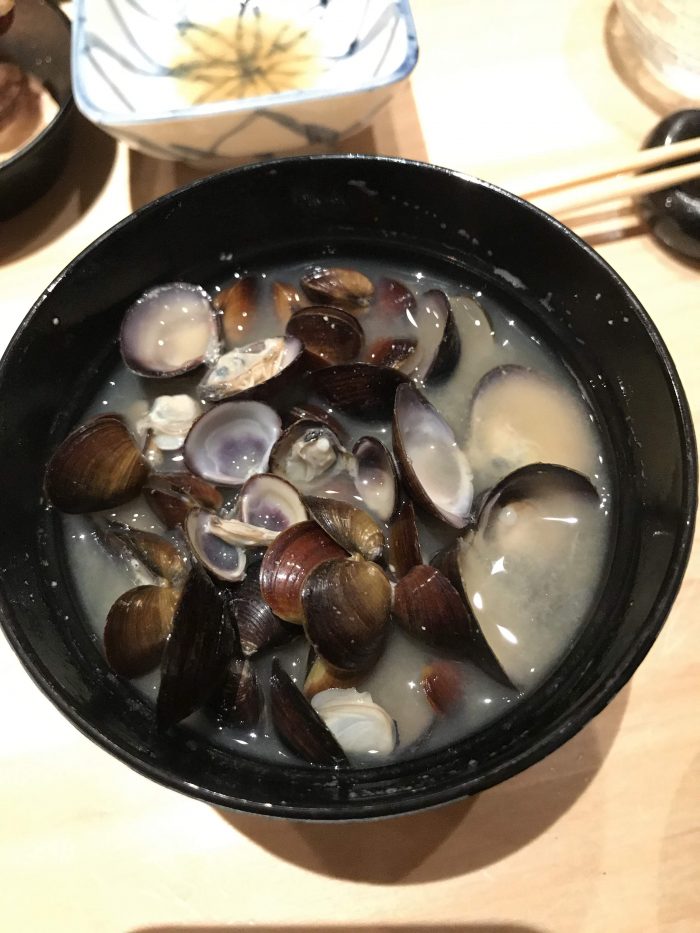 The final few plates began with radish, along with sea eel. 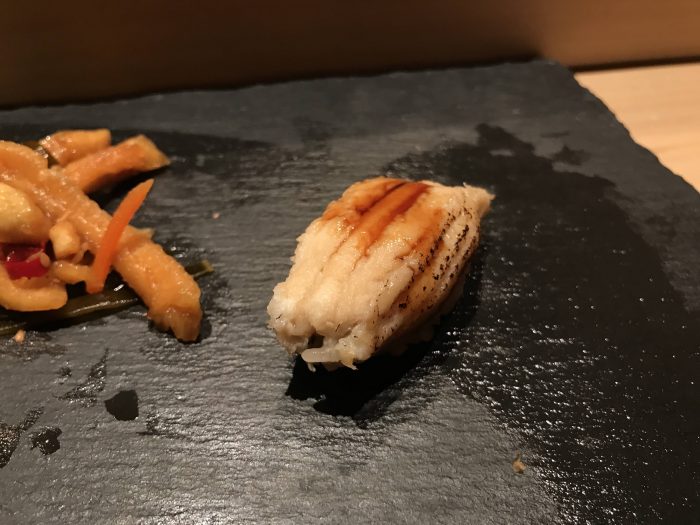 Followed by a tuna hand roll. 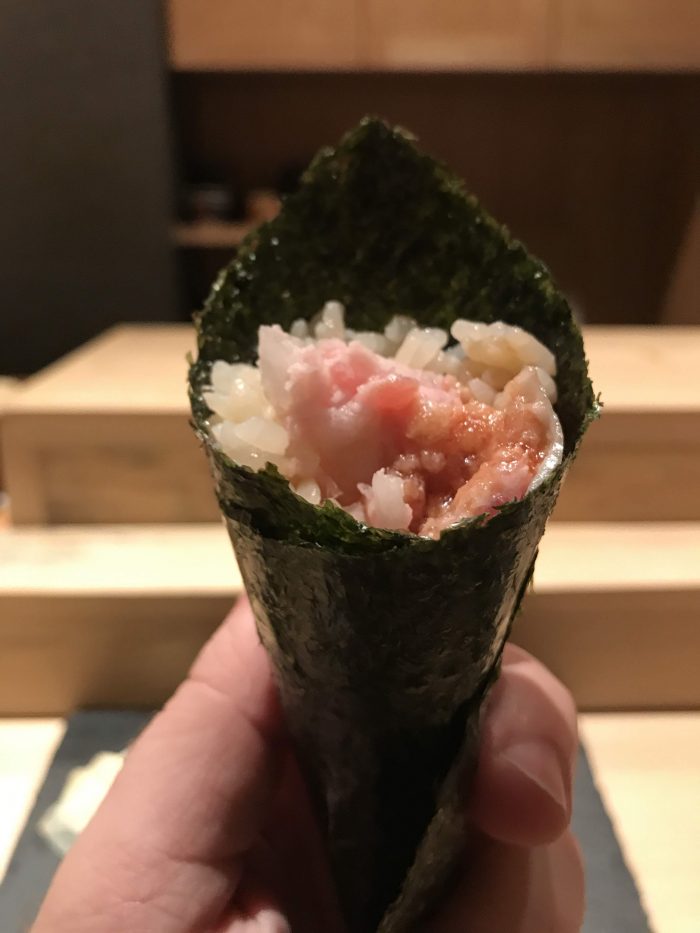 To finish, there was some dried cucumber. 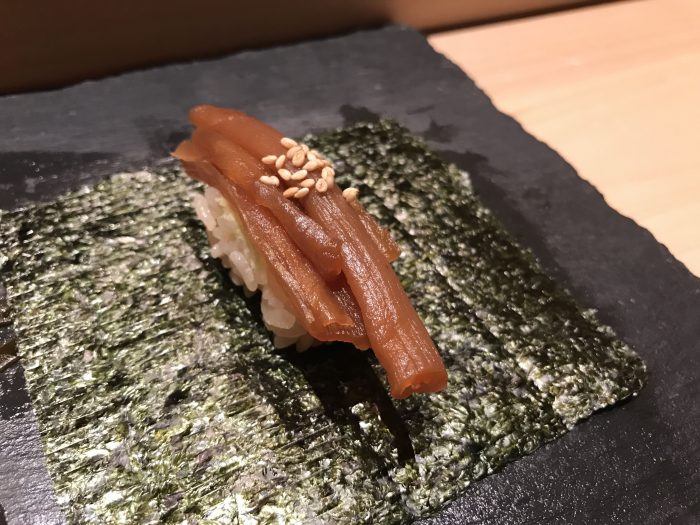 For dessert, I was given two large Japanese grapes. After so many dishes, they’re the perfect way to end a meal. 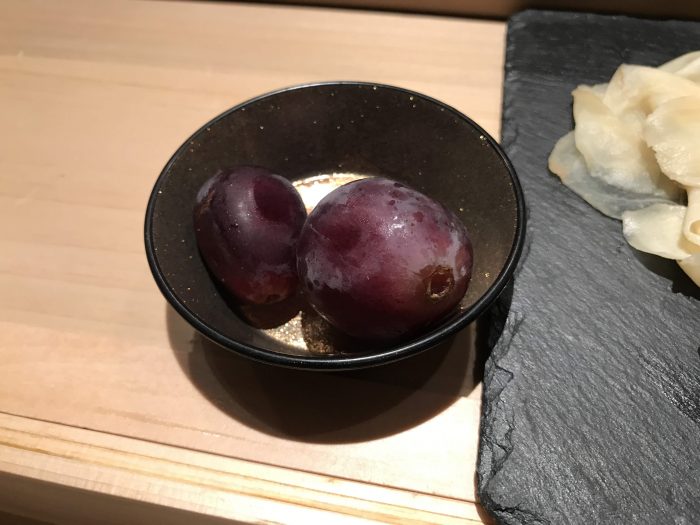 I didn’t go in starving due to having gone to Hokkaido Food Fair in Tokyo earlier in the day, but I was still hungry enough. Manten Sushi really gives you a great amount of food as part of their omakase.  It’s definitely not one of those places where you find yourself having to fill your stomach afterward. I was taking notes as I went so I could remember it all later, and it’s only now when I’m writing everything up that I’m truly realizing just how many courses there were in this omakase.

Manten Sushi is great option if you want nice omakase meal in Tokyo, but not break-the-bank nice. While someday I’d love to be able to have a Michelin-starred, hundreds-of-dollars omakase experience, for now, Manten Sushi will do just fine. 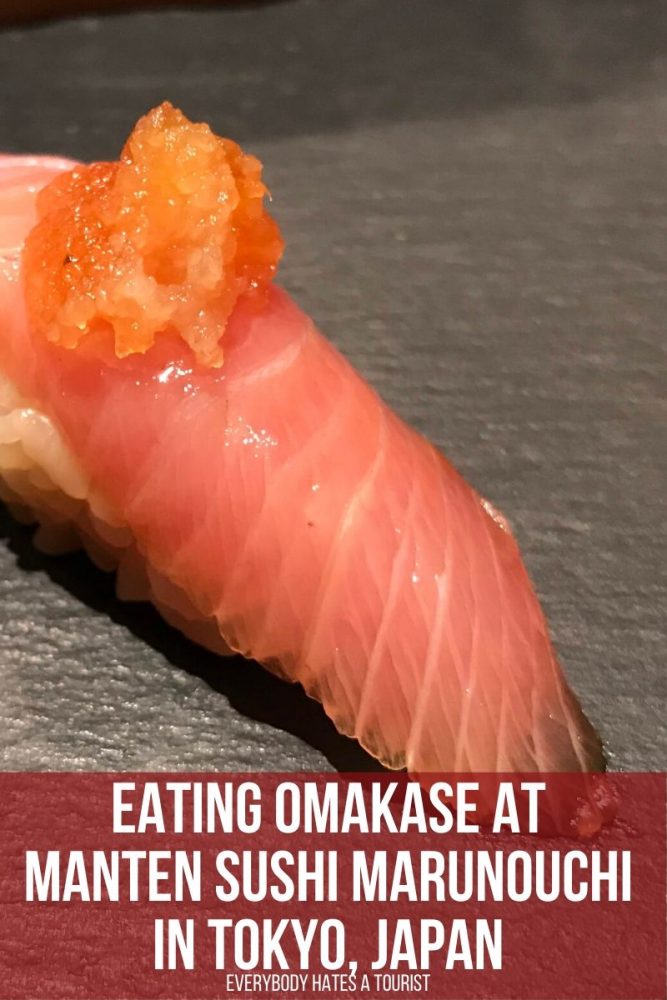