Hokkaido is perhaps Japan’s best food region (but don’t let the other regions hear that because all food is great in Japan). The cold waters surrounding the island produce a bounty of seafood. Thanks to being the least densely populated part of Japan, Hokkaido is home to a large portion of the country’s farming, including its dairy industry. All of this comes together in Sapporo ramen, which incorporates butter & fresh corn. When I visited Japan in April 2018, I went to Hokkaido & tasted many of these delicious foods. As luck would have it, my most recent trip to Japan timed perfectly with the Hokkaido Food Fair, a showcase of the region’s food that takes place every October in Tokyo. 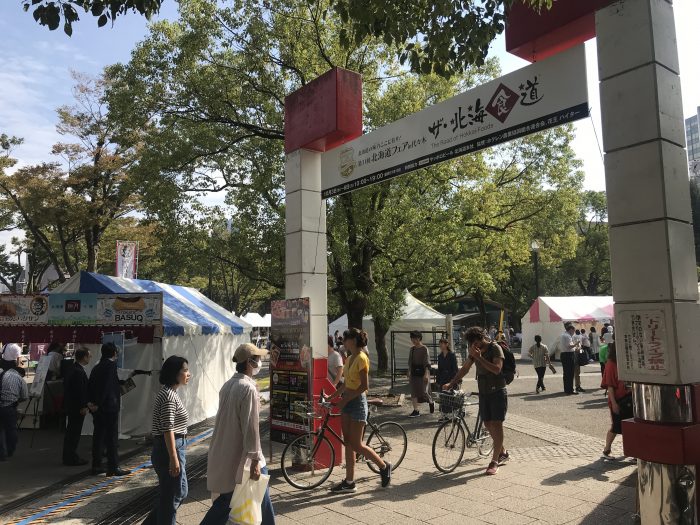 What is the Hokkaido Food Fair?

While it’s not difficult to get from Tokyo to Hokkaido, thanks to plenty of flights & the shinkansen, it can seem like it’s a world away. Most visitors to Japan (and even most Japanese people) don’t make it that far north. It’s a shame, since it’s a beautiful place with great food. For those who can’t make it, the Hokkaido Food Fair in Yoyogi brings Hokkaido to Tokyo each October. A similar food fair is held in Fukuoka each May, as well as a couple of other related events as part of “The Road of Hokkai Foods.” The Hokkaido Fair is put on by the Kita Nippon Advertising Co with the goal of sharing Hokkaido’s deliciousness across the rest of Japan.

The Hokkaido Fair has over 100 booths, representing over 40 cities, towns, and villages from Hokkaido. It truly is a regional showcase. The food represents everything Hokkaido has to offer, from seafood to ramen to produce to baked goods to cheese to meat to sake to craft beer.

Upon arriving at the Hokkaido Food Fair, you’ll see a ton of stands set up. Get there early or go on Thursday if you prefer to avoid crowds & lines.

At the entrance, you can get a brochure that shows all of the vendors, along with a map. This makes it a bit easier to navigate. The brochure is entirely in Japanese, but there are helpful photos to point you in the right direction, and also to make you hungry if somehow you didn’t show up on an empty stomach. Google Translate’s live photo mode can also help you out. 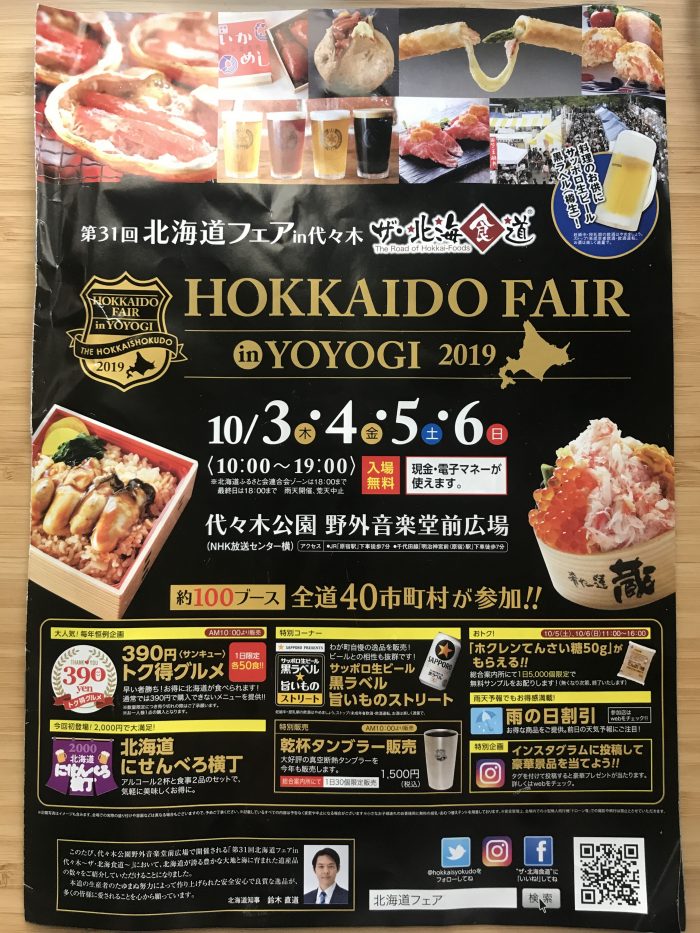 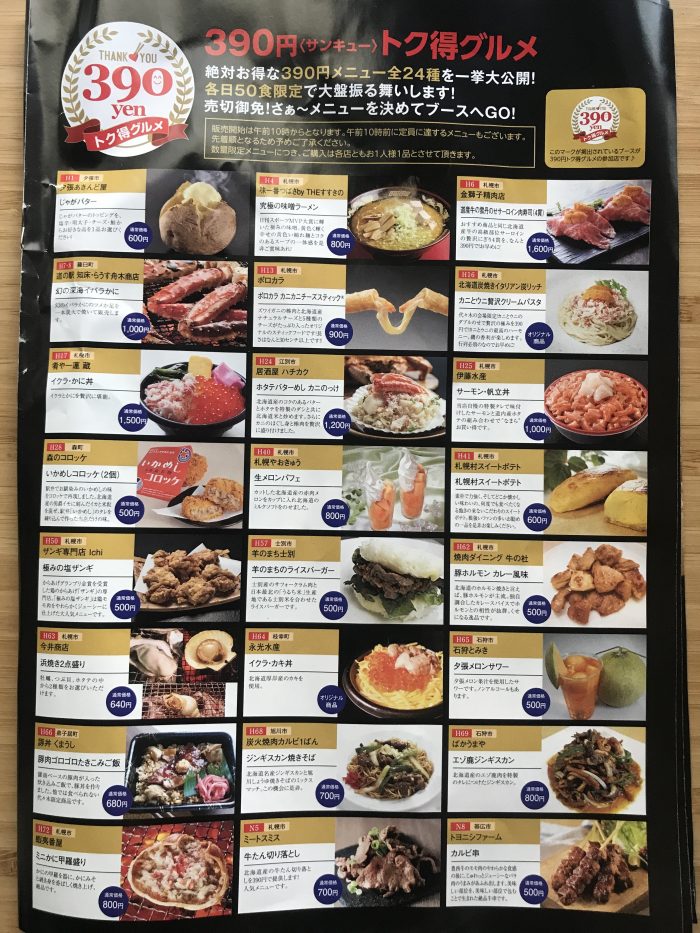 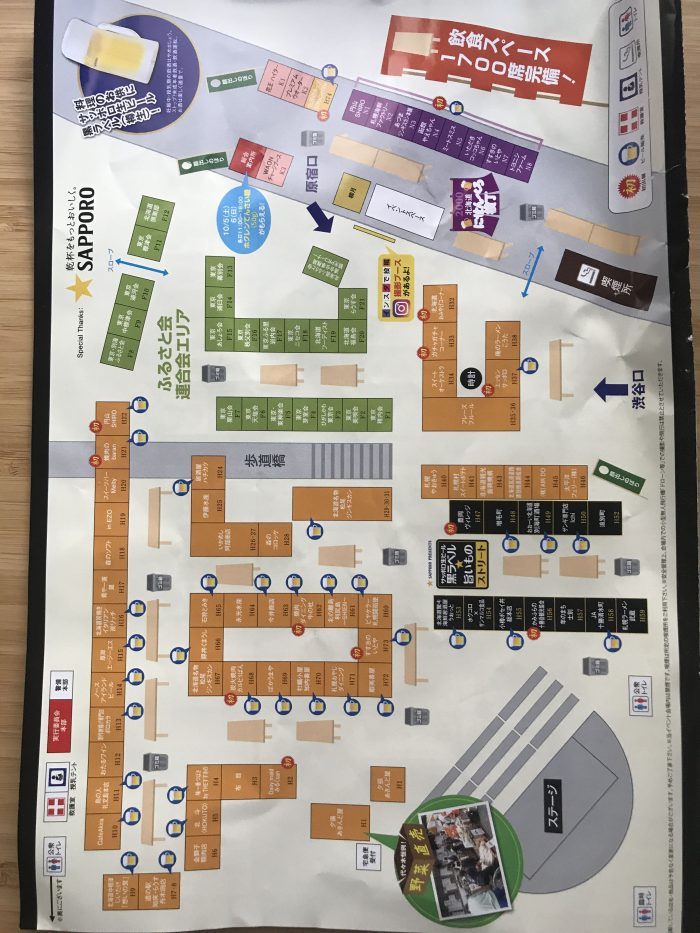 Despite the brochure, I was still so overwhelmed that I didn’t know what to do first. So I did what I always do when I panic, & I bought a beer. In this case, it was a Sorachi 1984 beer made by Sapporo from local Hokkaido Sorachi Ace hops. 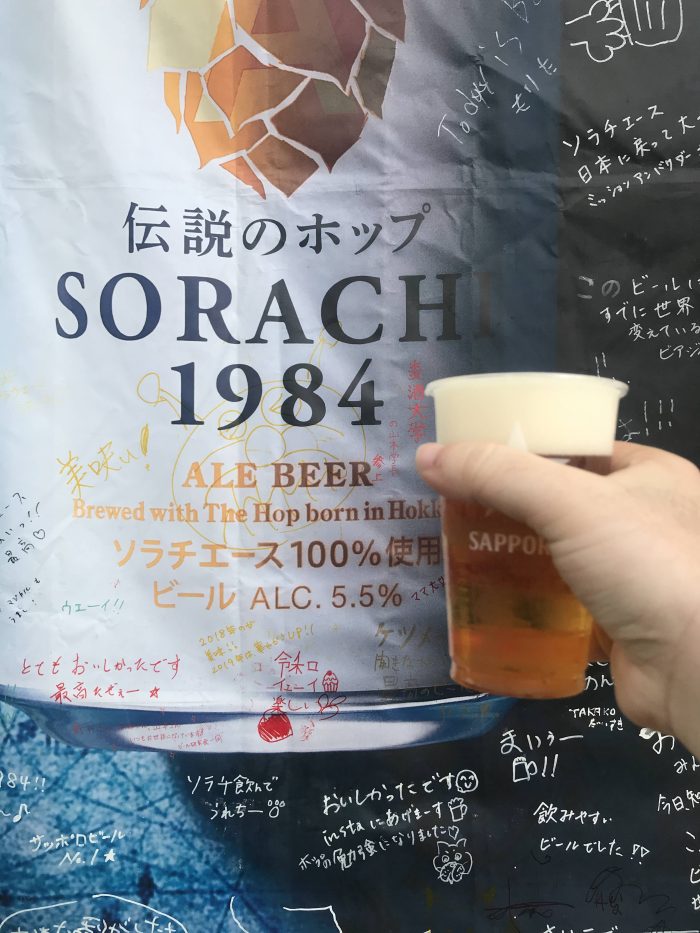 Beer in hand, I started to walk around the stalls a bit. I noted a few possibilities such as sweet potatoes (sadly, not served by a dog) & desserts to come back to later. Unfortunately, I did not come back to most of them; there was just too much good food to eat. 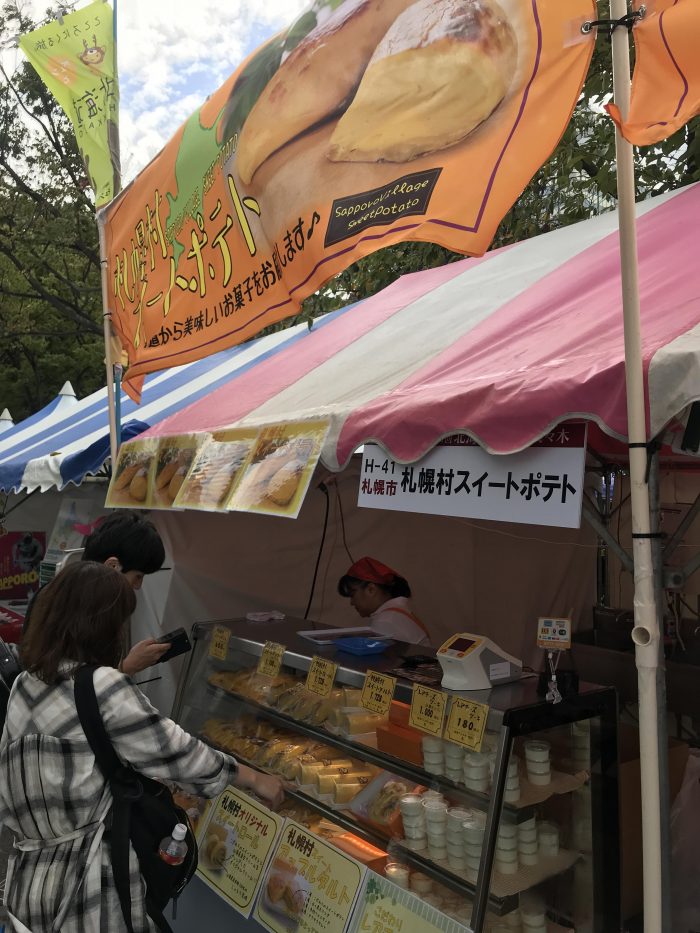 Finally, I passed a stand that I knew had to be my first dish. They were grilling king crab. 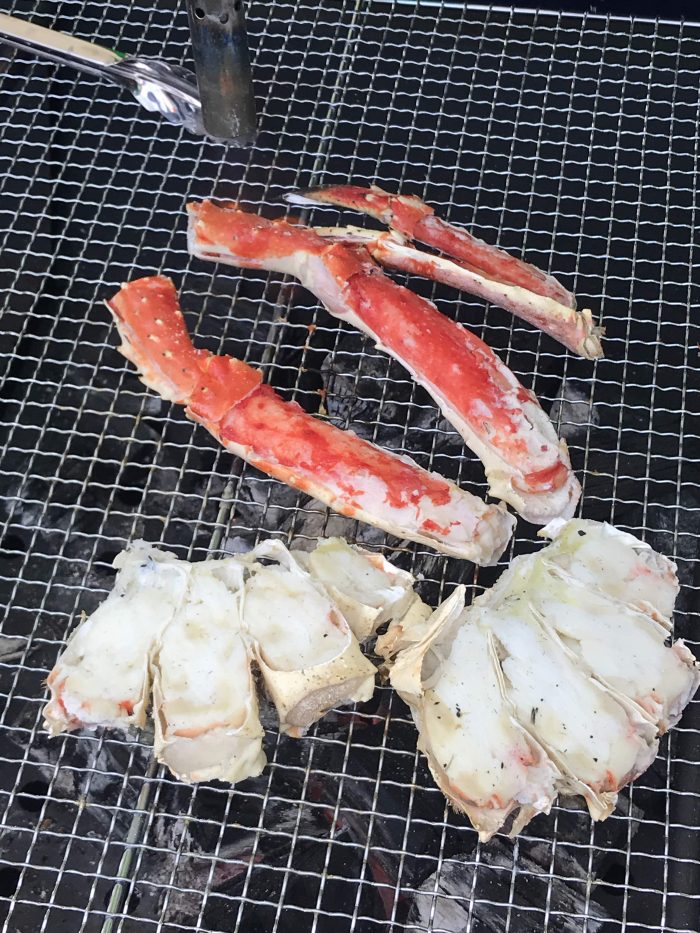 At 2200 yen, it was on the pricer side, but I decided to treat myself. Other similar stands did have king crab for a bit less, so I could have saved a bit by walking around more before I ate. Really though, who could pass this up? 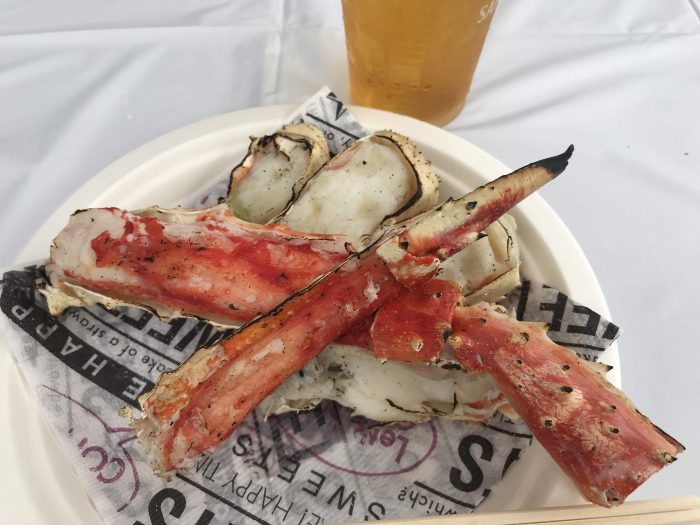 A big part of the fun of attending the Hokkaido Food Fair is just wandering around the different stalls. Since I’d had a bit to eat & was no longer starving, I walked around the rest of the grounds.

There was sake, plus other cocktails. 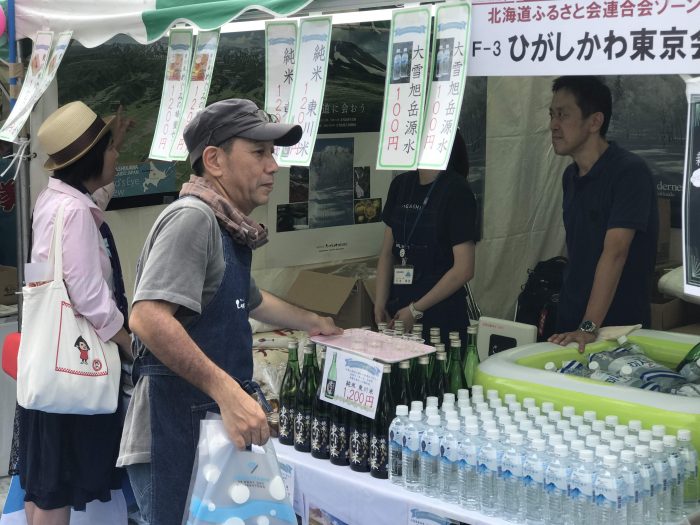 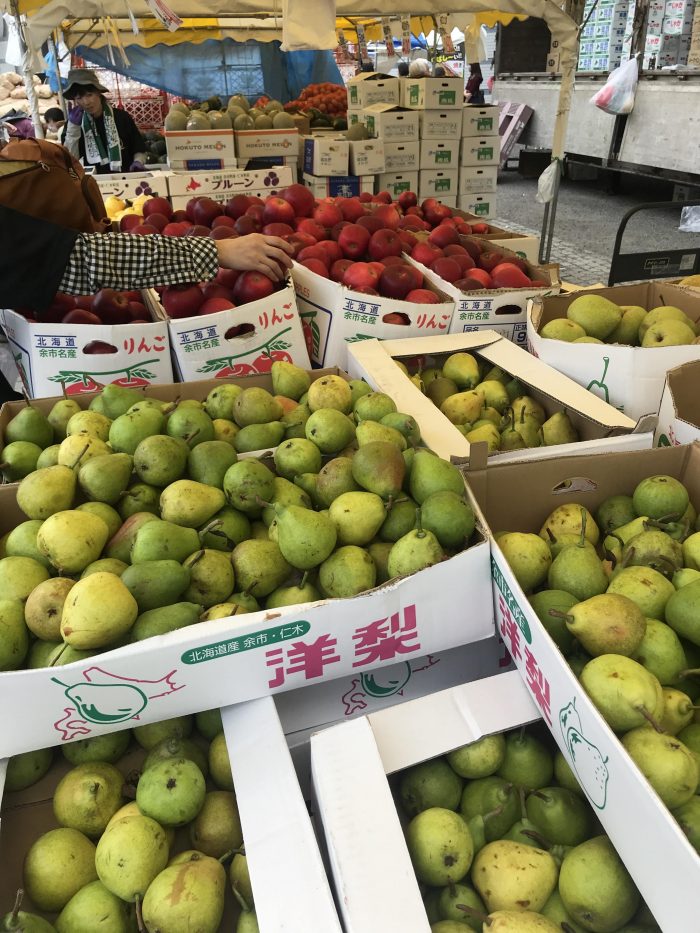 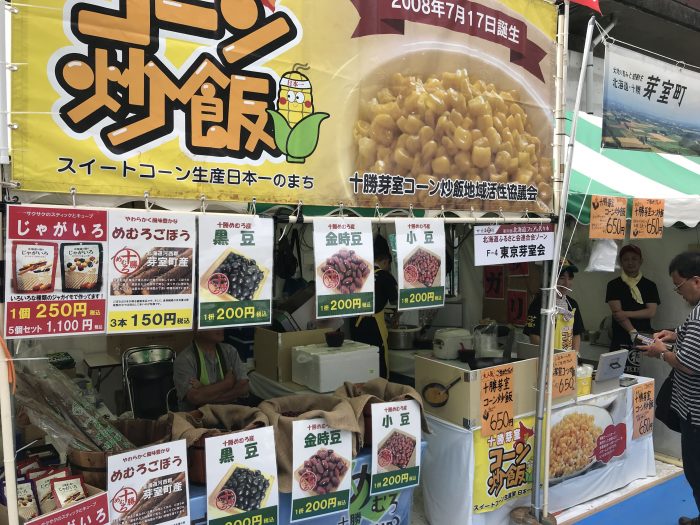 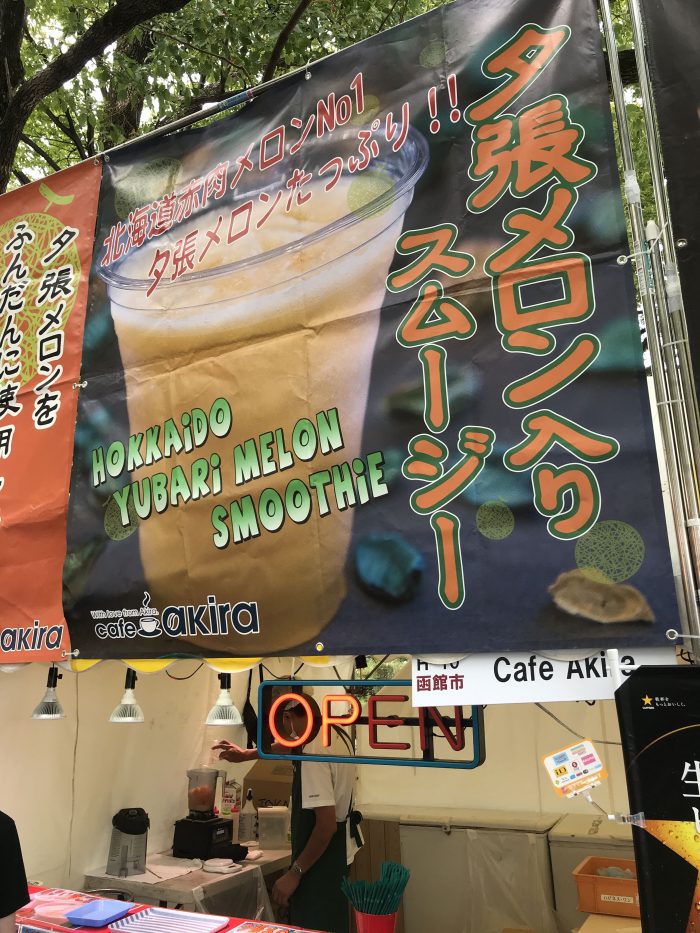 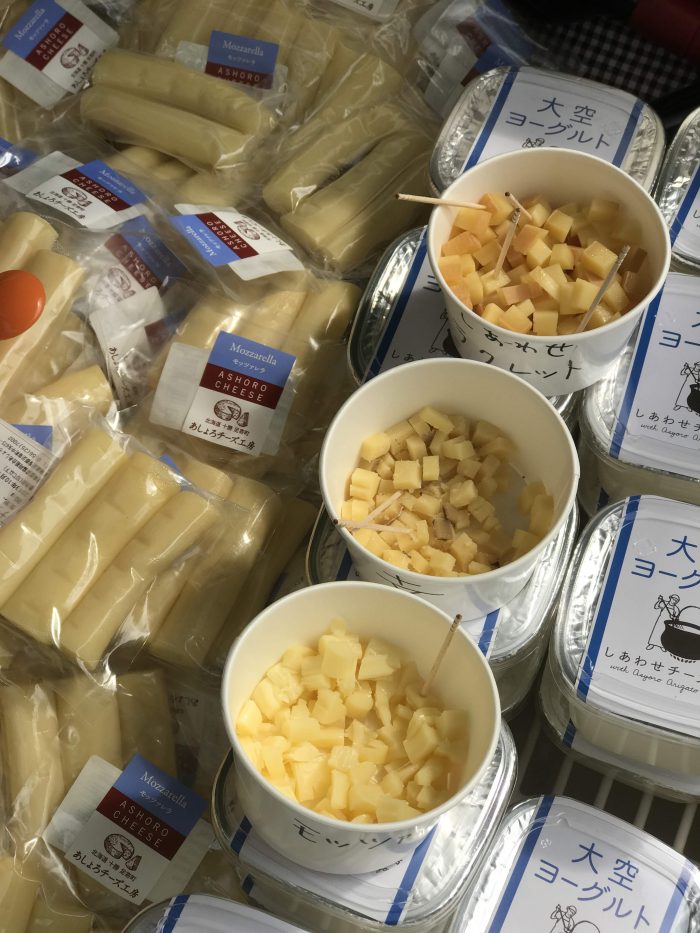 As well as plenty of grilled meat. 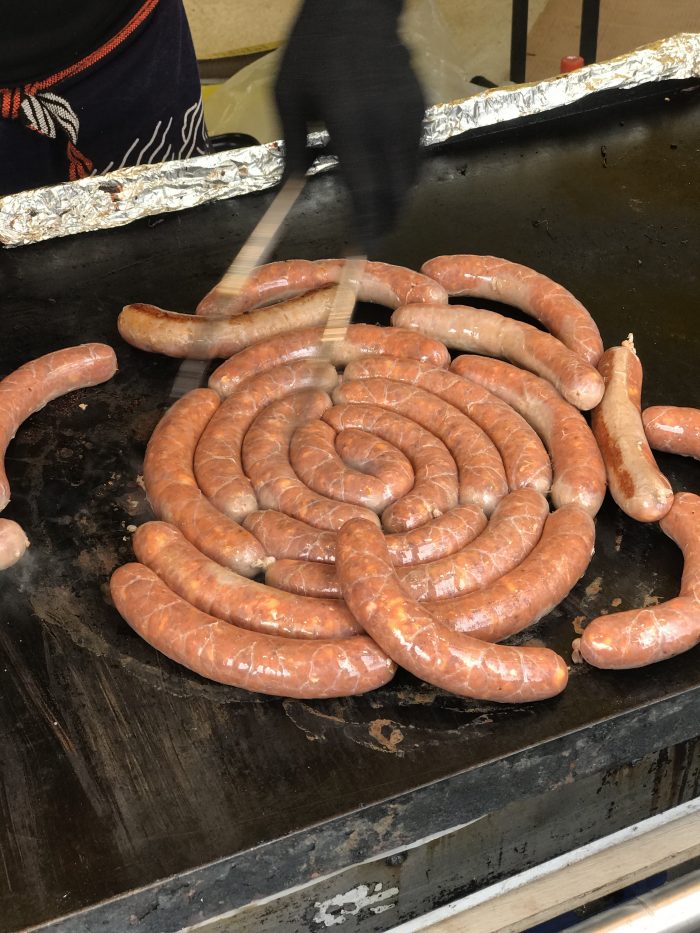 There were also a few craft beer stands selling beer from around Hokkaido, including North Island Beer, which I had visited in Sapporo. 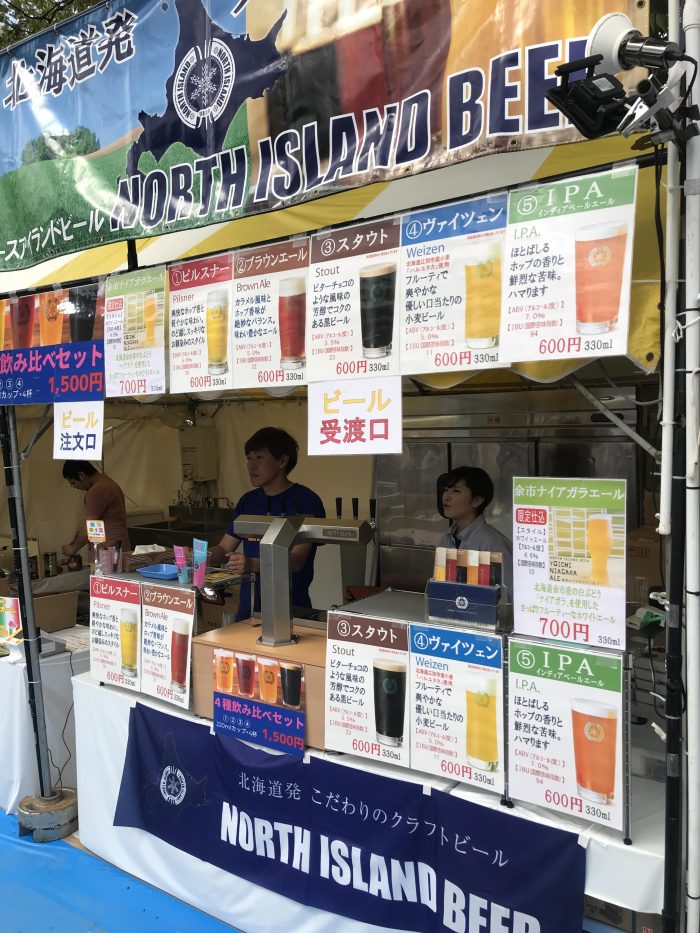 A few stands were selling ramen. Since it was such a warm day, I decided to skip that. 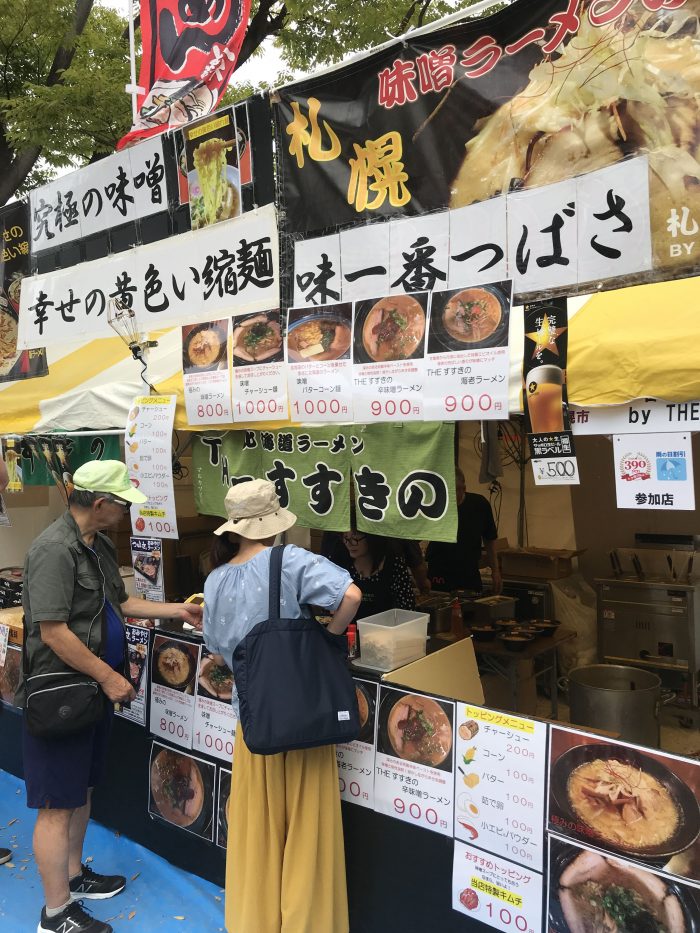 And above all, there was so much seafood. It seemed like almost half the stands were selling some variety of it, including grilled crab, scallops, & squid, fried items, uni, sashimi, & seafood rice bowls (kaisendon). 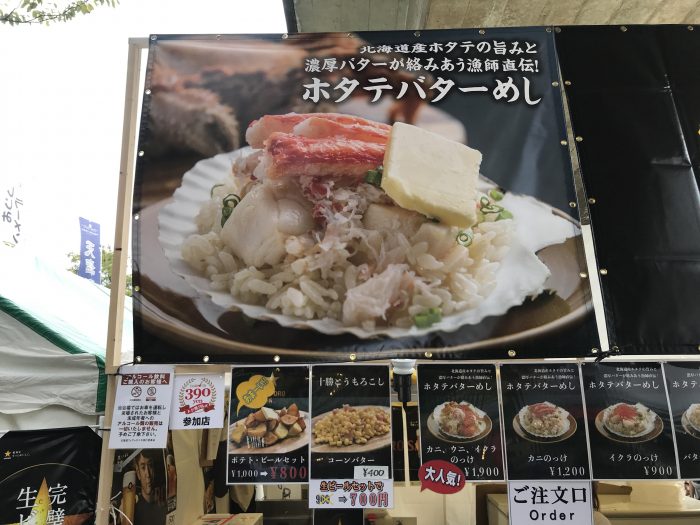 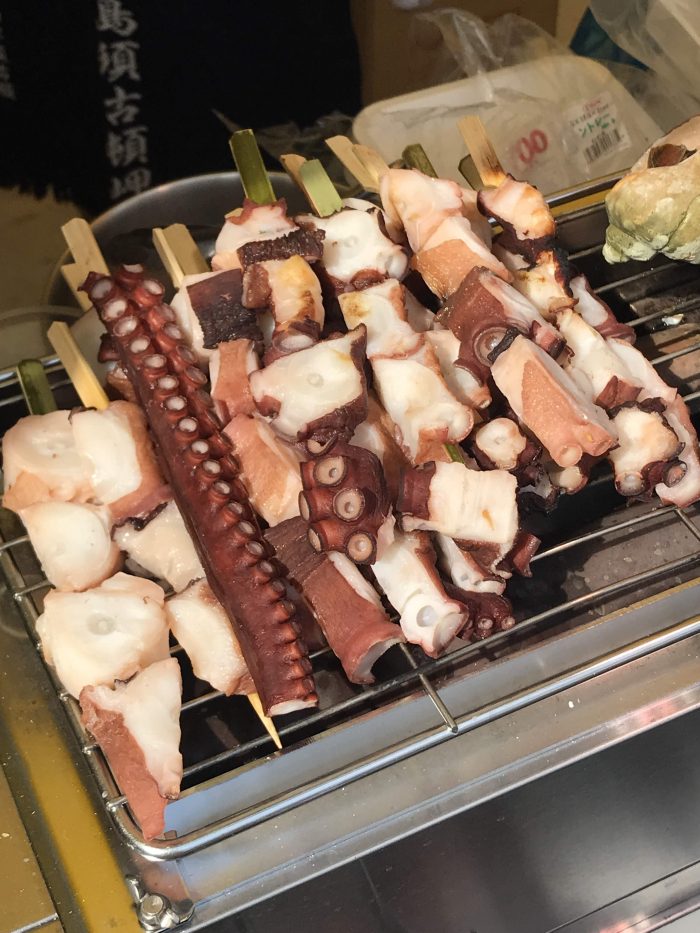 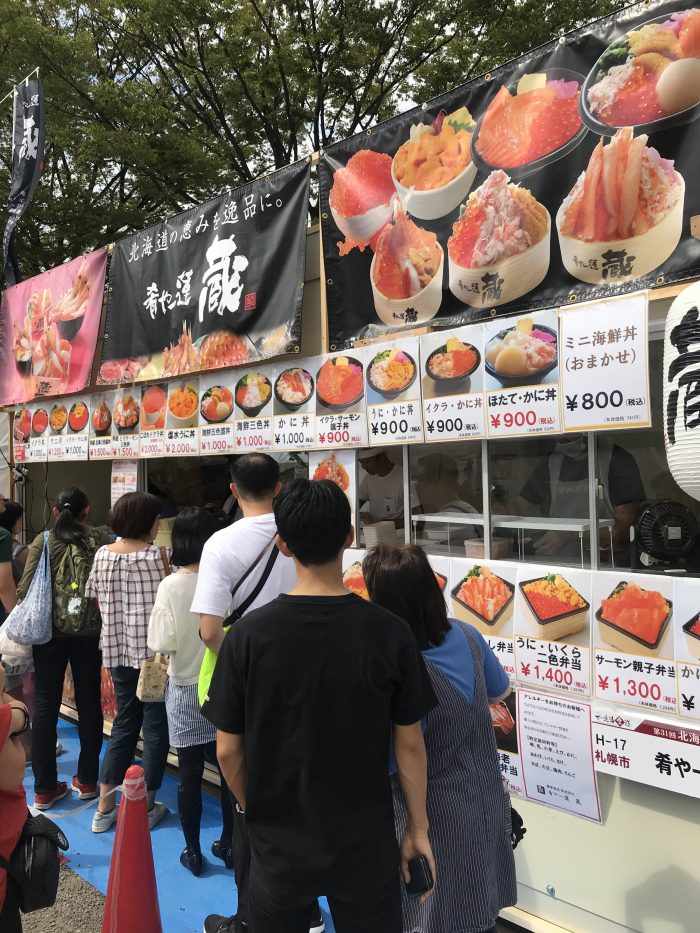 After more craft beer, it was time for some grilled seafood. I had a scallop & squid. 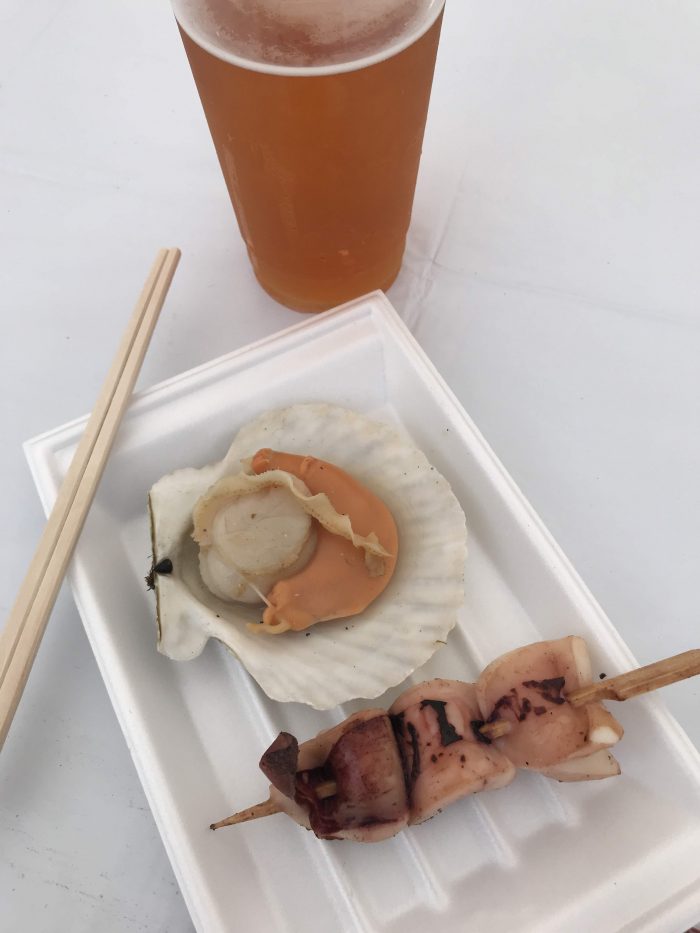 Then it was time for dessert! Since it was warm, the soft serve ice cream was looking appealing. 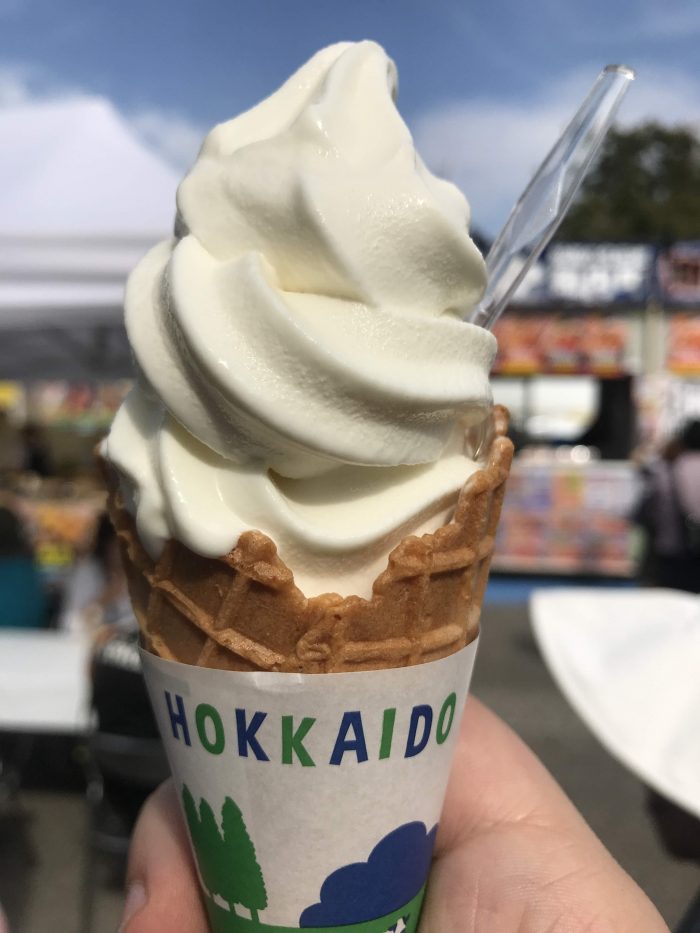 It was delicious. By this point, I couldn’t eat anything else, as much as I wanted to. While the food at most Hokkaido Fair stalls is available in fairly small portions, there’s only so much one person can eat. 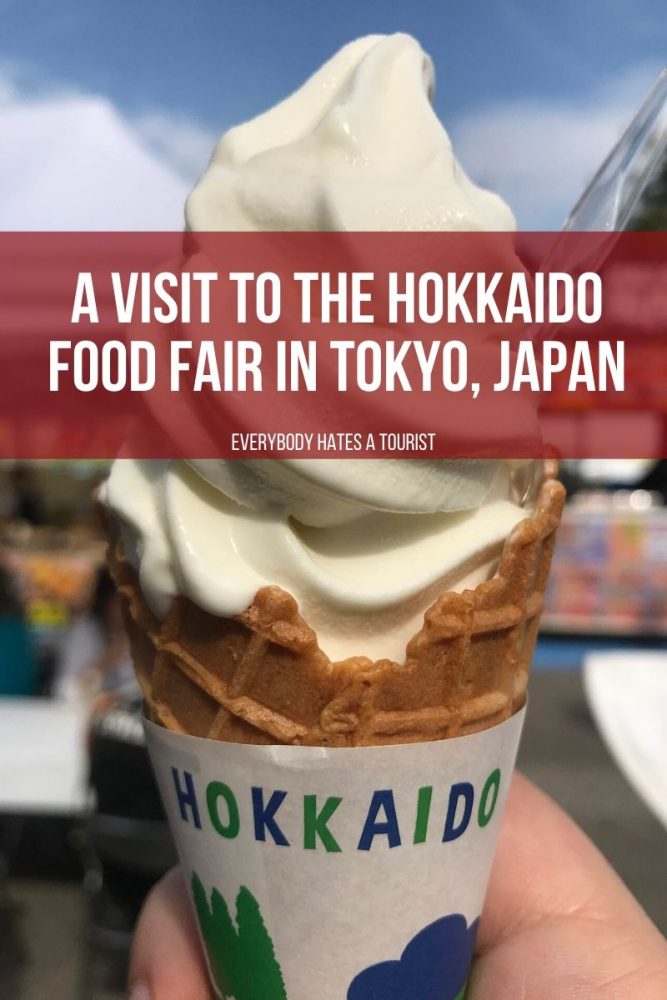