While there’s plenty to explore within Gothenburg’s city center, just off the coast lies a perfect day trip destination: the Southern Archipelago.

The Southern Archipelago consists of hundreds of islands ranging in size from small rocks in the sea to islands that are a couple of miles across, making them perfect for walking or cycling. 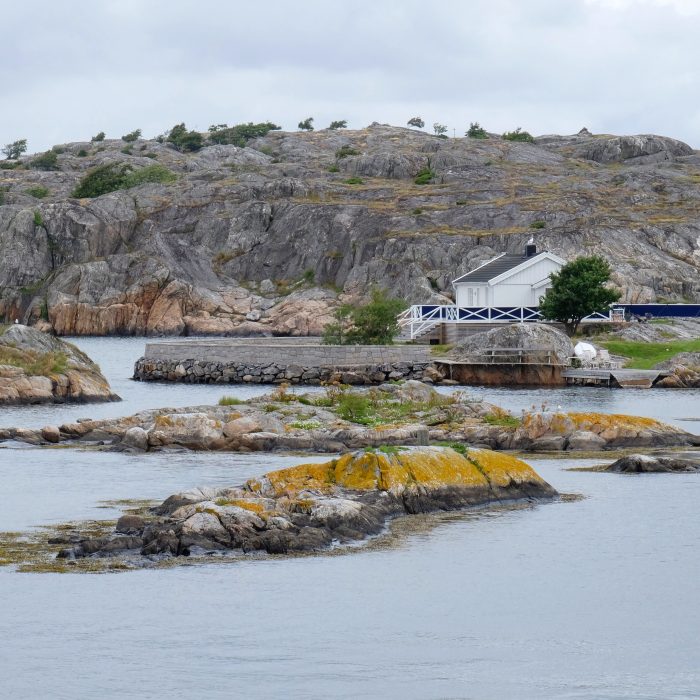 Access to the Gothenburg Archipelago is usually by ferry from Saltholmen, in the western part of Gothenburg. Ferries to and from the islands vary in schedule (roughly every hour, but check the schedules), but they run fairly late. You can buy a day ticket for all of Gothenburg that also includes unlimited ferry rides. At just 85 SEK ($10 USD), it’s a great value, as you can manage to visit several islands over the course of the full day. 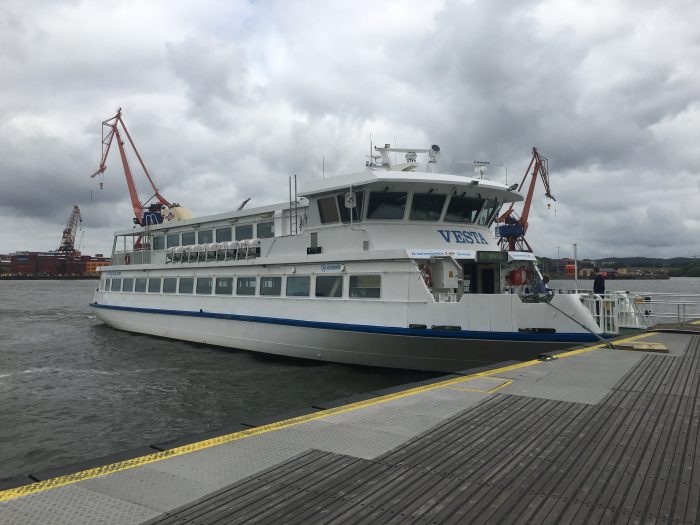 During the summer, there is a special ferry (#281) that runs from Stenpren in central Gothenburg, going all the way to Vrångö, the southernmost inhabited island of the archipelago. This was the ferry I opted to take to the Southern Archipelago. The full journey to Vrångö takes over an hour and a half since it winds its way around the islands, and there are a few stops, but it’s a pleasant journey that allows you to check out other places you may want to visit on your way back.

The day began with grey skies. There wasn’t any rain in the forecast, but it didn’t look like the weather was going to be particularly nice. That said, it was expected to be one of the nicer days of my visit, so I took my chances. While there is plenty of inside seating on the ferry, I sat out at the back of the boat so I could take photos and enjoy the fresh sea air, even if it had a bit of a chill. Despite the cold & grey, there were plenty of other passengers outside as well.

The route begins by traveling down the Göta älv, the river that passes through Gothenburg. 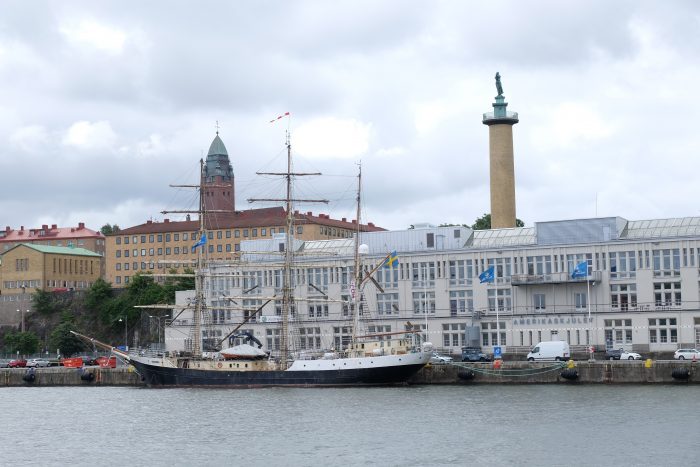 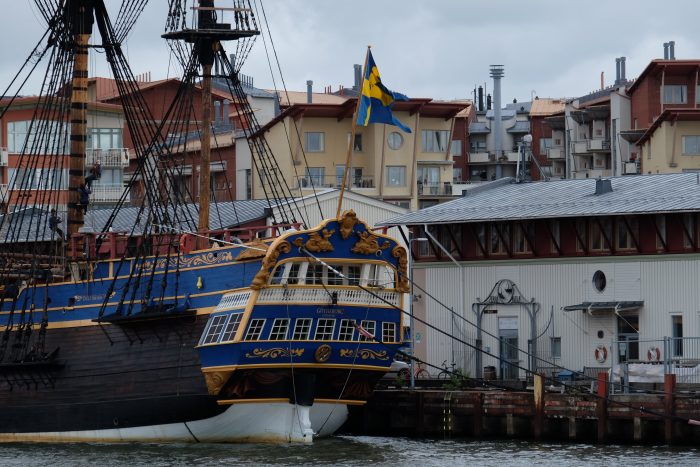 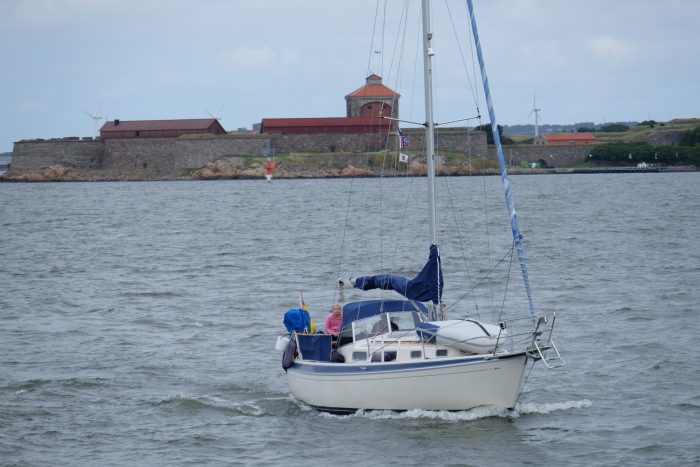 After stopping at Saltholmen, we headed out into the Gothenburg Archipelago. Even with the gloomy skies, the North Sea water was rather calm. 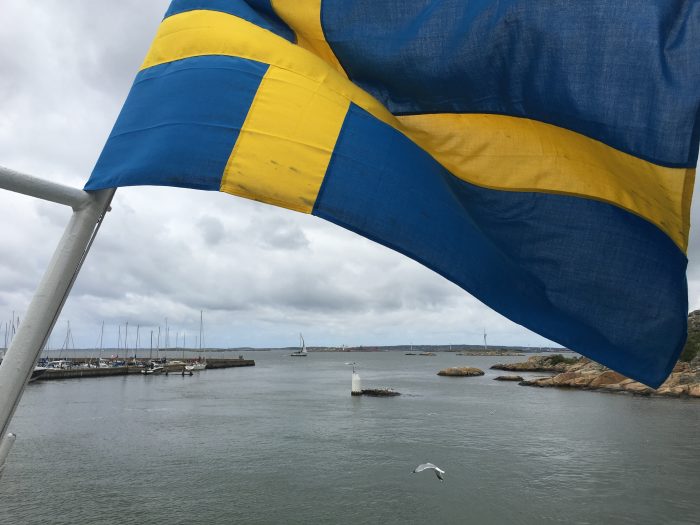 Out in the islands, we zig-zagged back and forth from port to port, stopping at Kopstadso, Styrsö Bratten, Styrsö Skaret, Donso, Karlholmen, then finally, Vrångö. 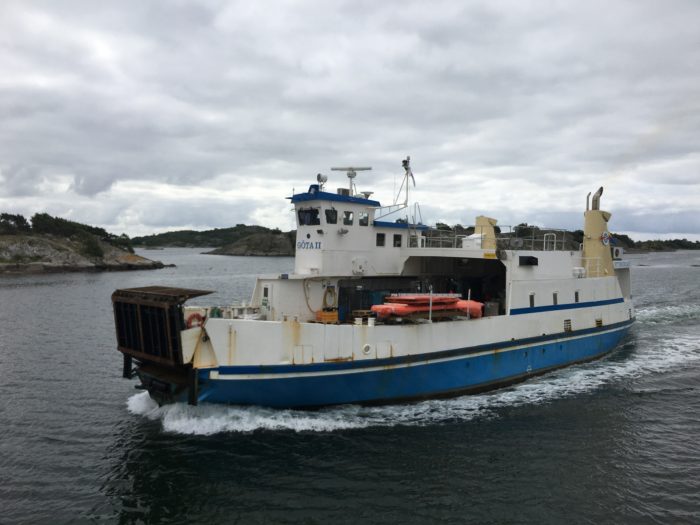 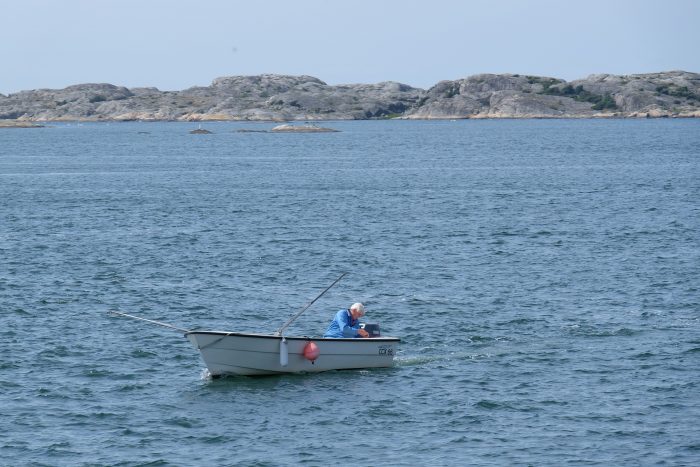 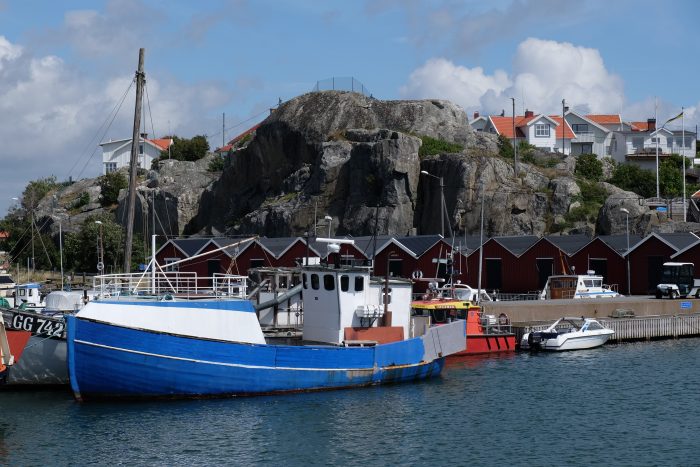 As with all of the larger islands, Vrångö is inhabited. There are many summer homes here, though some people do live in the Gothenburg Archipelago year-round. Given their close proximity to Gothenburg, the islands are a perfect place to stay in a quiet location while also being near the amenities of a city.

After checking the ferry schedule, I determined that I had about an hour to explore Vrångö. This was plenty of time to walk across the narrow width of the island, through the residential areas where the bulk of the population lives. There were a couple of cafes, plus the remains of what looked to have been a mini golf course.

Reaching the far side of Vrångö, I found a large rock with a spectacular view from the top. The skies had started to turn blue just as the ferry had docked, and by this point it was clear that it was going to turn into a nice day. The viewpoint at the top of Vrångö also has a pilot station that is no longer in use. Following a quick scamper up to the top of the rock, it was time to slowly walk back through the village to the ferry terminal. 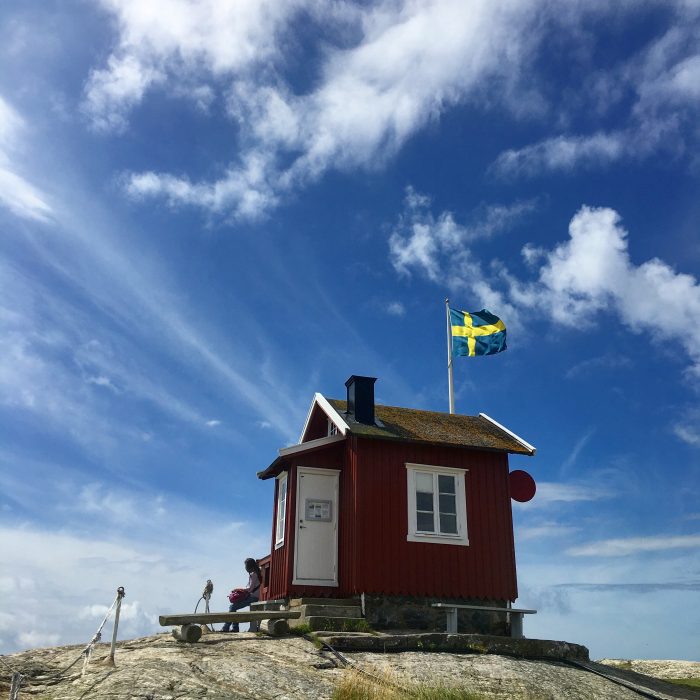 My second stop of the day was at Bratten, on the larger island of Styrsö. At the ferry terminal there are a couple of cafes, including the Obergska Cafe, which has a lovely outside garden to relax in. I had a local beer & a piece of vasterbotten paj, a Swedish cheese pie made with cheese from the Vasterbotten region I would visit later in my trip. With the weather turning sunny and warmer, many of the patrons were sitting outside eating ice cream. 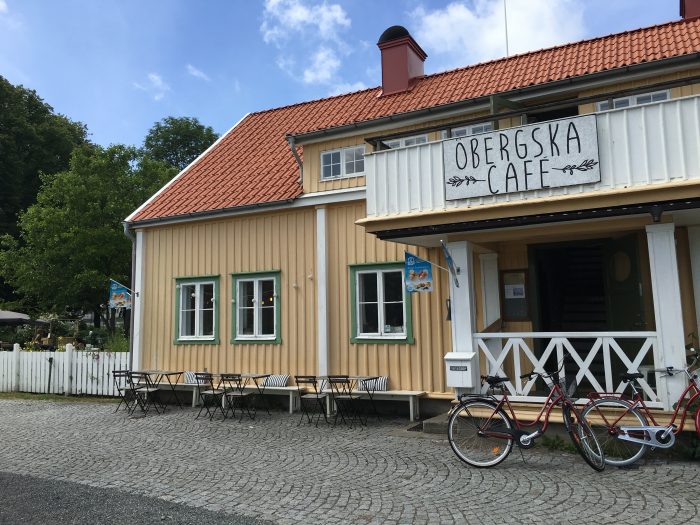 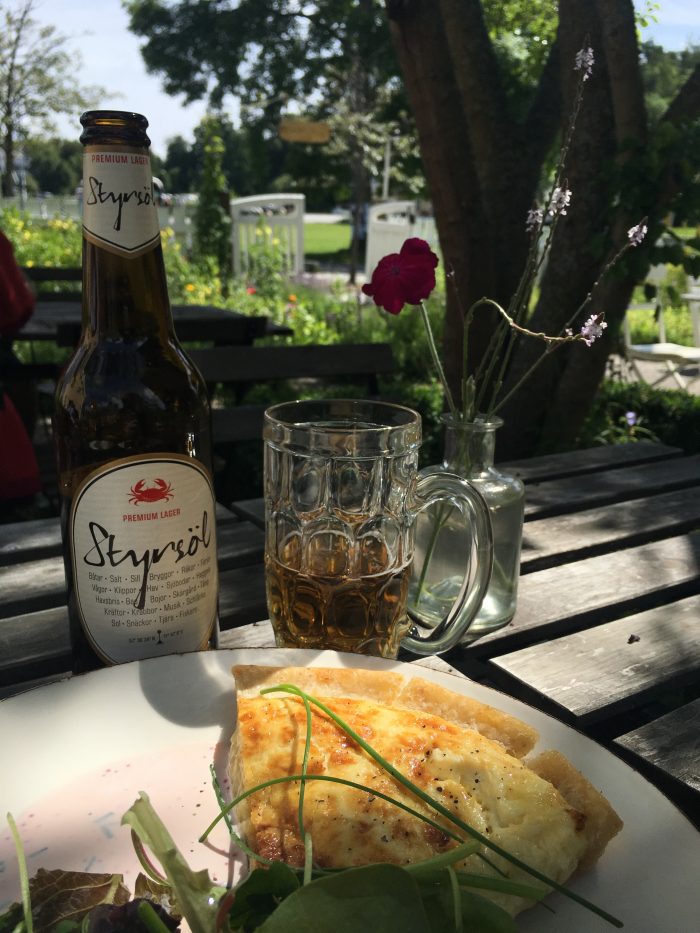 Even though it’s one of the larger islands in the Gothenburg Archipelago, Styrsö is still easy to walk across, which is exactly what I did after my lunch. Crossing the northern part of the island, it was a pleasant, meandering walk of about 45 minutes to Styrsö Tången ferry terminal. The walk was quiet. With no cars on the island, and just the occasional noise from a scotter or golf cart, you often hear nothing but birds. Many of the island’s residents get around by bicycle, which you can also bring on the ferry. It’s a safe place, so everyone leaves their bikes unlocked. 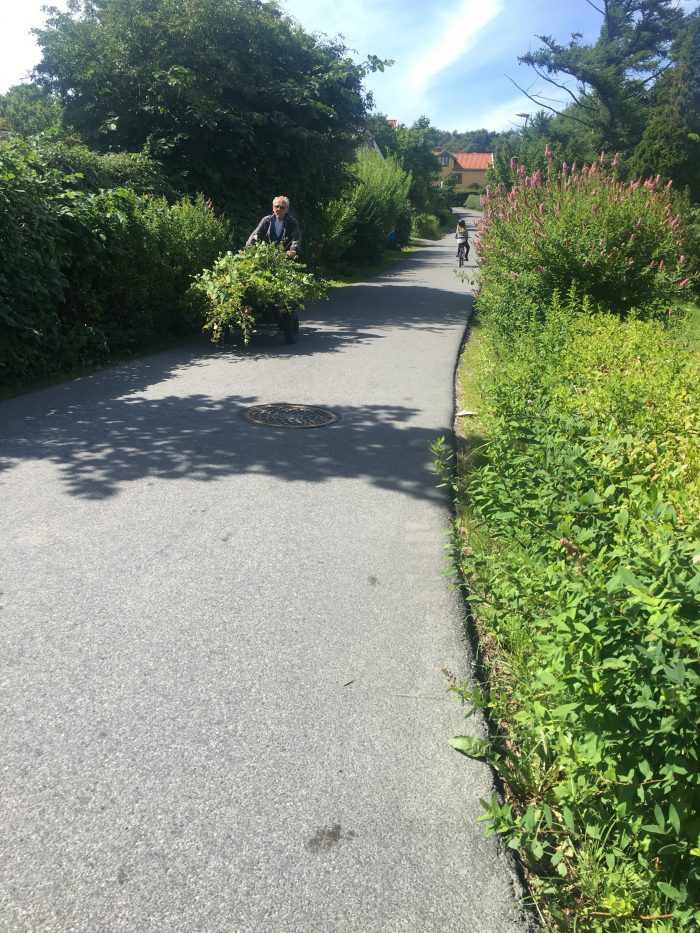 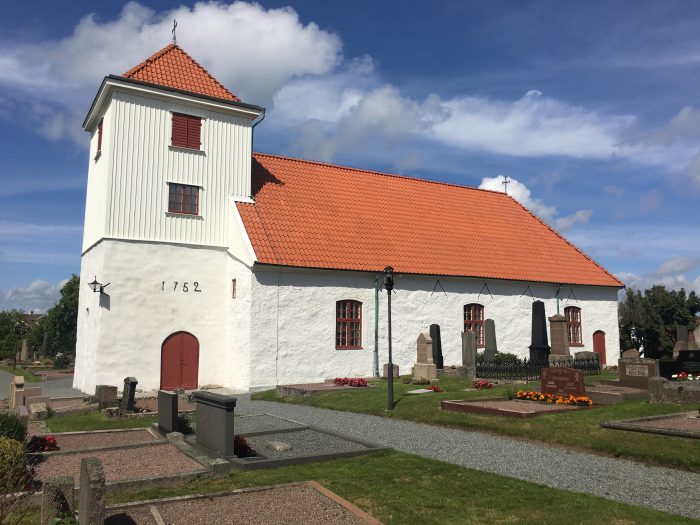 I reached Tången, a small port village on the northern edge of Styrsö, with plenty of time to spare. From here, I had a couple of options. There were a couple of cafes, but having just eaten, I didn’t much feel like sitting down at one of them. Instead, I realized that I could hit one more island than I had planned. If you download the Vasttrafik app, you can view all of the real-time ferry schedules for the Southern Archipelago. The next ferry to Brännö would not be departing for over a hour and a half, and even then, it would be stopping at another island called Vargö first. However, there was another ferry departing for Vargo much sooner, so I could take that ferry, have some time to explore the island, then catch that same Brännö ferry I had wanted to take in the first place. The Vasttrafik app is a must-download if you’re planning a day of island hopping around the Gothenburg Archipelago, since you can see easily see all the different options from all of the nearby ferry stops. 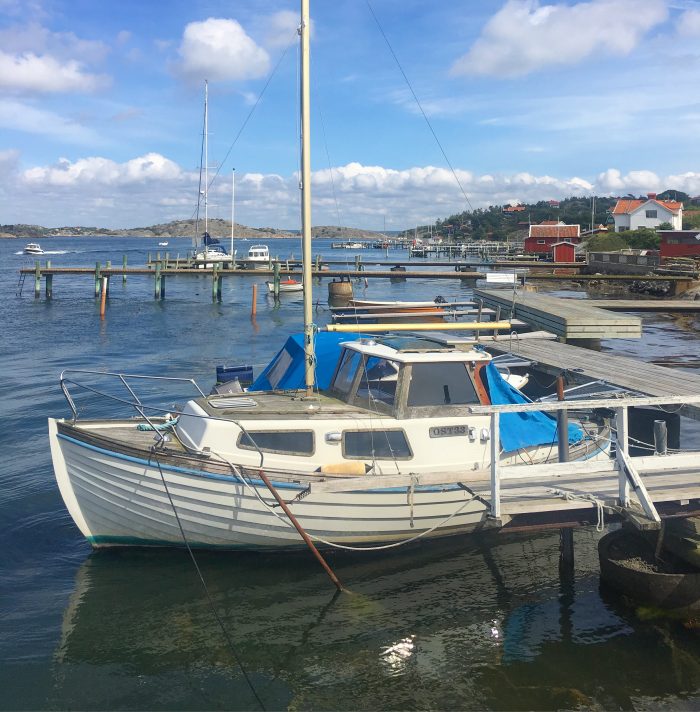 After a five minute ride from Styrsö Tången, I had arrived at Vargö. Vargö is one of the smaller inhabited islands of the Southern Archipelago. The ferry dock is small, and there’s essentially just one path for visitors to take, leading between the handful of homes that line the shore and into the interior of the island, which is a nature reserve. From there, it’s perhaps a 10 minute walk along the path to the southern shore of the island, where you will find yourself at a cove with a nice little beach.

How you decide to explore the area is up to you, since the path ends here. You can head around the sides of the cove, scampering up the rocks to get a better view of the island, or you can just hang out on the beach (as long as you don’t mind the smell of decaying seaweed). 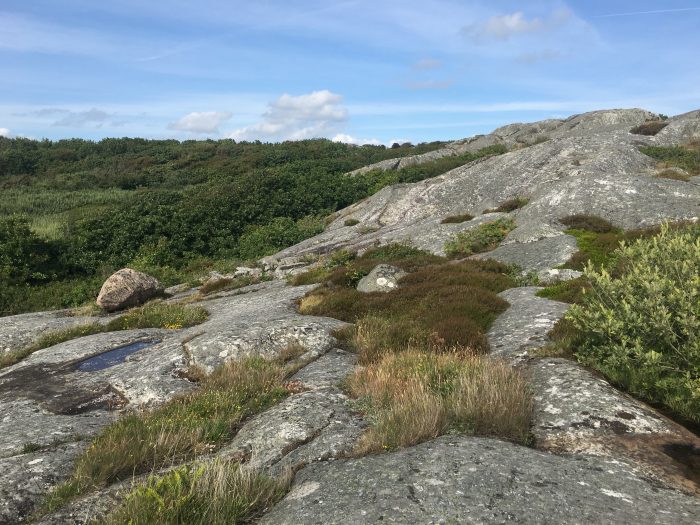 I headed back to the ferry dock, then got on the ferry to Brännö Husvik, my final island of the day. Along the way, we passed several smaller uninhabited islands. 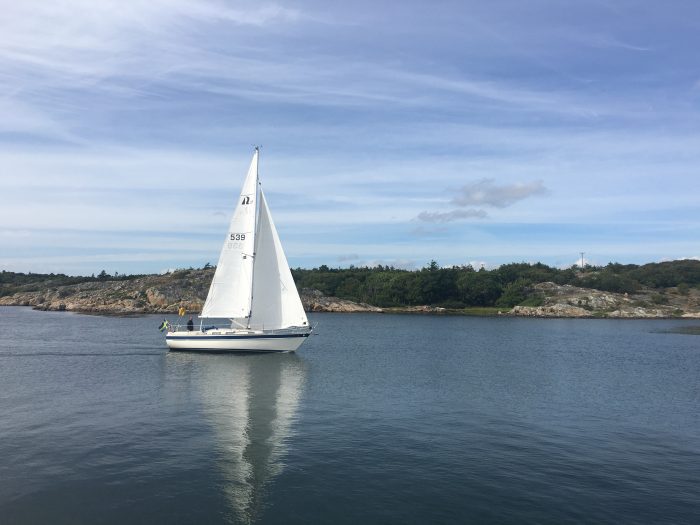 Brännö is one of the largest islands in the Southern Archipelago. However, like Styrsö, it’s still pleasantly walkable. I headed north from Husvik to Rödsten, which is the ferry stop at the northern end of the island. Brännö was the most bustling island I visited, passing several people and several cats during my walk north, which took about 30 minutes.

The walk itself took 30 minutes, but along the way I encountered a beer garden advertising local beer, so I decided to treat myself to a pint. It had turned into a beautiful day, perfect for sitting outside with a beer. The local beer, called Brännöl, isn’t quite made on the islands, but it’s brewed further north along the Swedish coast, which is close enough. 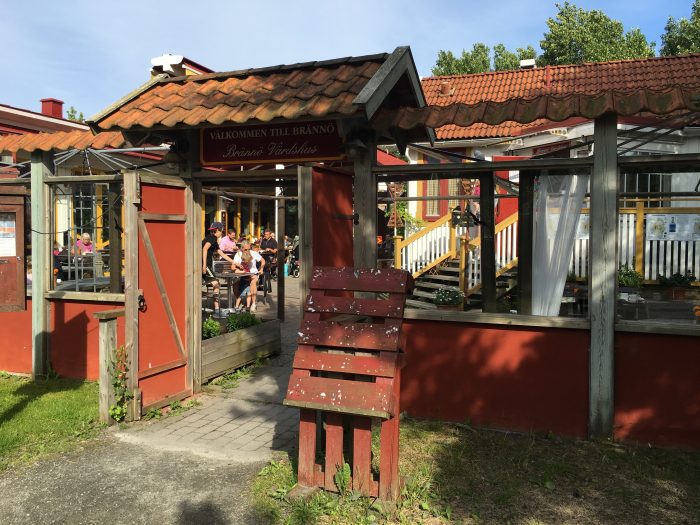 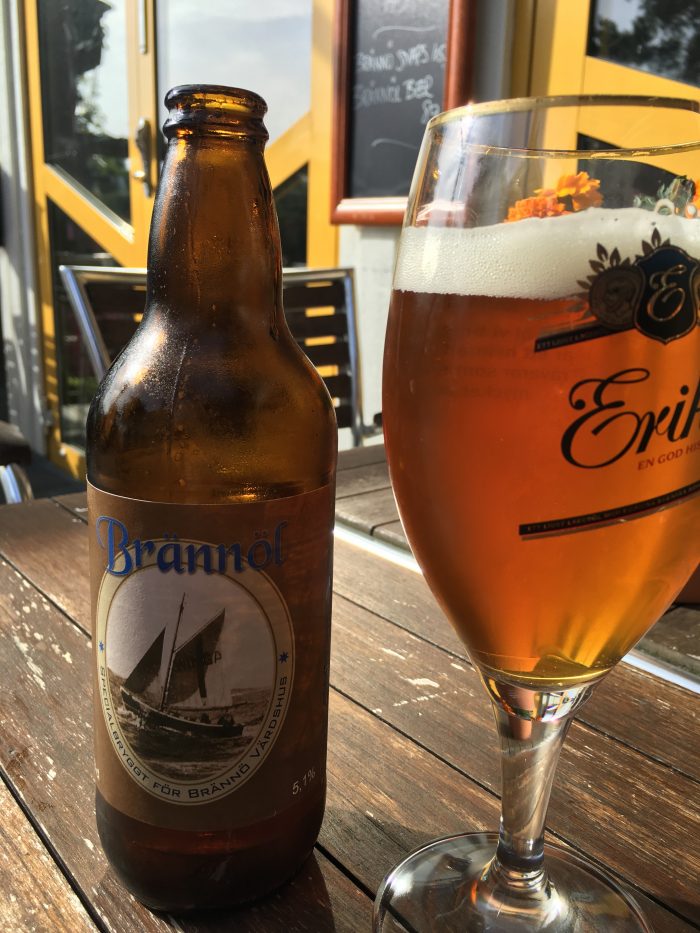 After my beer, I finished my walk to the ferry dock, then took the next boat back to Saltholmen. From there, the No. 9 & No. 11 trams go back into central Gothenburg. 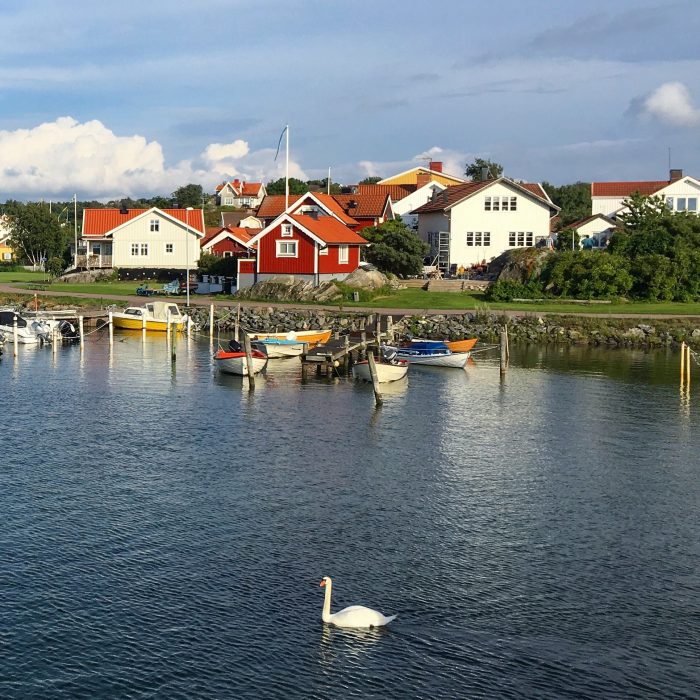 Island hopping the Southern Archipelago is a fantastic day trip to take from Gothenburg. The islands are close enough that you can have a good time even if you just have a few hours to spare, and if the weather is nice, they are a lovely place to hike & relax. I got to visit four of the islands of the Gothenburg Archipelago for an hour or two each. An especially ambitious visitor could hit a few more on a longer day trip. Alternatively, with plenty of AirBnb options scattered throughout the islands, you could also make it an extended stay. The Southern Archipelago is a beautiful place to visit when you’re in Gothenburg, whether it’s just for a few hours or for a longer trip to the islands.