You might not expect Riga, Latvia to have a huge craft beer scene, and at first glance, you’d be right. However, recent entrants to the market give Riga an exciting beer future. The craft beer wave is sweeping through Northern Europe and slowly descending downward and eastward. Estonia has a particularly robust scene that rivals that of Finland, but Latvia is beginning to see quality brewers as well. Here is my guide to the best craft beer in Riga, including breweries, beer bars, and tap rooms.

The best breweries in Riga, Latvia

Alus Darbnica Labietis has only been around since 2013, but in my opinion they are the best and most inventive craft brewers in Latvia. 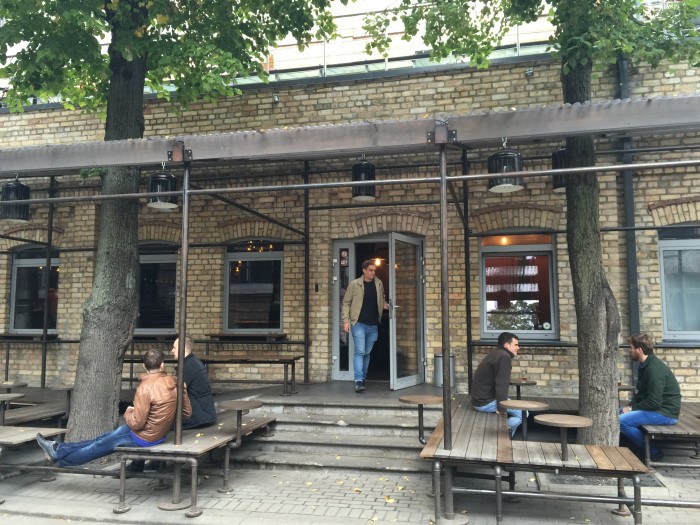 The brewery has two locations: the main brewery, which is a mile or two northeast of the old town, but easily accessed by walking or public transportation, and an outpost in Riga Central Market. I visited both while I was in Riga.

The main brewery has a massive outside patio that must be packed on summer days. Inside, there is also plenty of seating, along with helpful bartenders that are knowledgeable about the beer that rotates through their 12 taps. 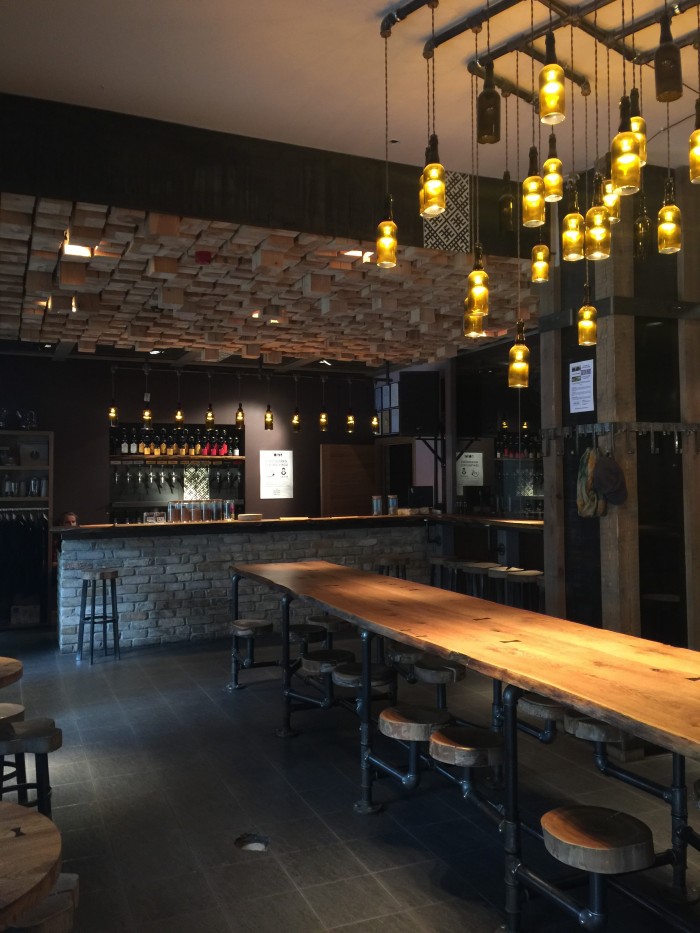 The bartenders also have a great sense of humor. One of my favorite things about visiting Riga was the local humor, which is tough to explain, but it’s the sort of optimistic sarcasm that comes from a country that has often experienced tough times, but sees hope for the future. Example: One of the bartenders in Alus Darbnica Labietis, upon a couple of British tourists being apologetic that they only had a 20 Euro note to pay for their beers, said deadpan, “We can get through this.” 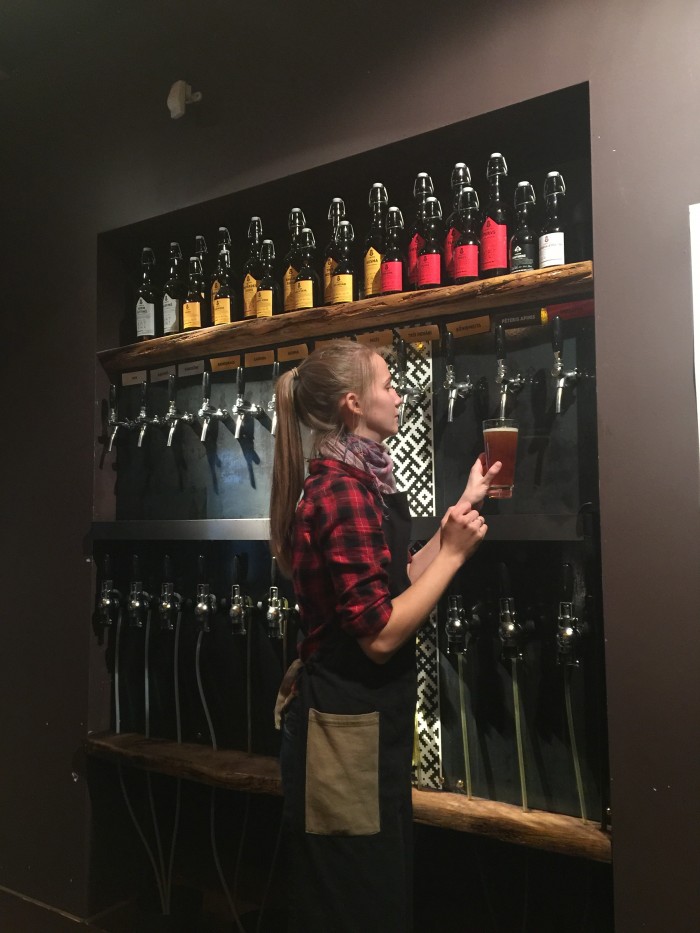 I had a similar experience buying a drink in a convenience store, when I only had a 2 Euro coin and got a response of “challenge accepted.” Perhaps I’m just too accustomed to local store owners who scowl about having to give change, but I was amused.

Back to the beer, Alus Darbnica Labietis is quickly gaining a reputation in Latvia for having some very creative beers. The brewers & the rest of the staff will go on field trips into the local countryside and forests to find ingredients for their beers. While not every beer will be everyone’s cup of tea (or beer), kudos to them for always trying new things. 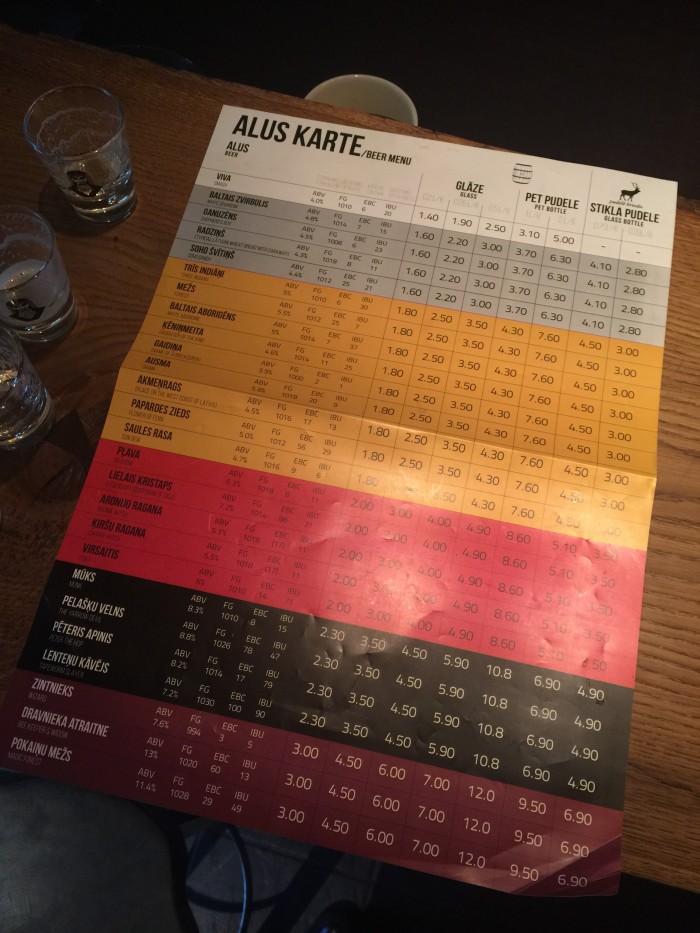 They do typical pale ales, IPAs, and double IPAs well of course, but other beers I tried included Radzins, made from a typical Latvian Wheat Bread With Caraway; Ausma (Dawn), which had ginger & peppermint added; and Pļava (Meadow), which was made with local herbs.

If you’re into creative beers & you’re in Riga, be sure to visit Alus Darbnica Labietis. If you’re not yet convinced, here is their awesome logo. 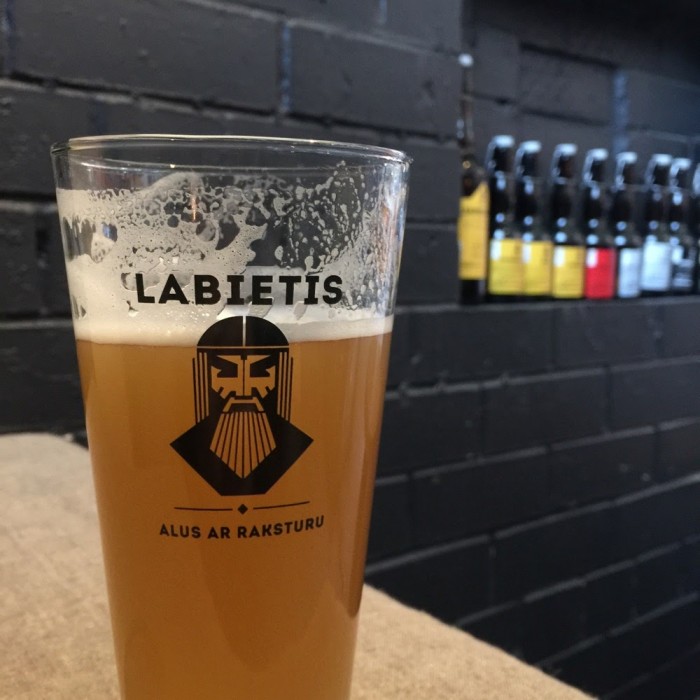 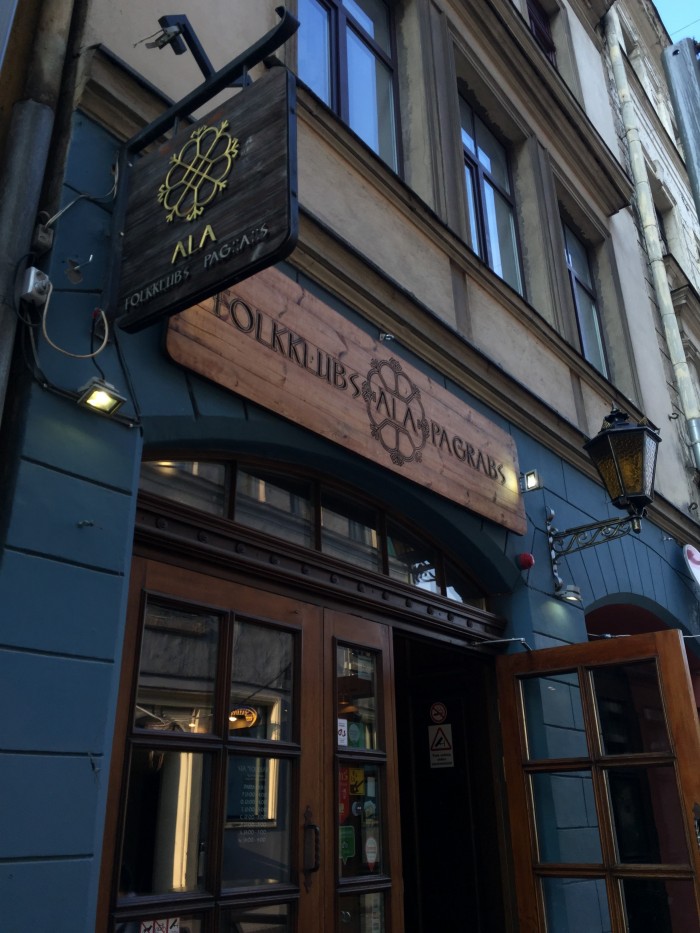 Folkklubs Ala Pagrabs has everything. Conveniently located in a dark, semi-dingy basement in Riga’s old town, it’s a gathering spot for locals & tourists of all ages. It feels like something out of The Hobbit. 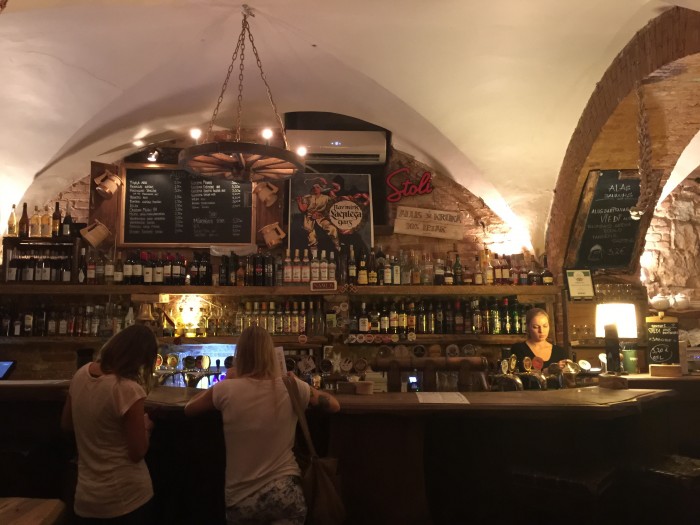 If you’re looking for live music, they’ve got it. You might also be lucky enough to hear a Latvian cover of a Weezer song, which is just as glorious as it sounds. 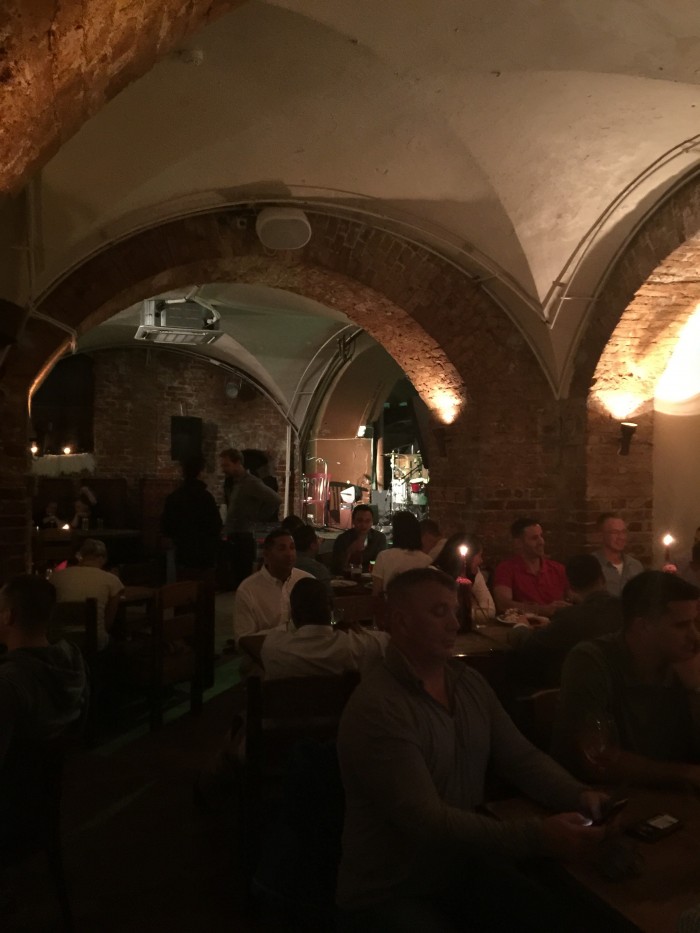 They have cheap Latvian bar food covered as well, as I wrote about in my last post about food in Riga. 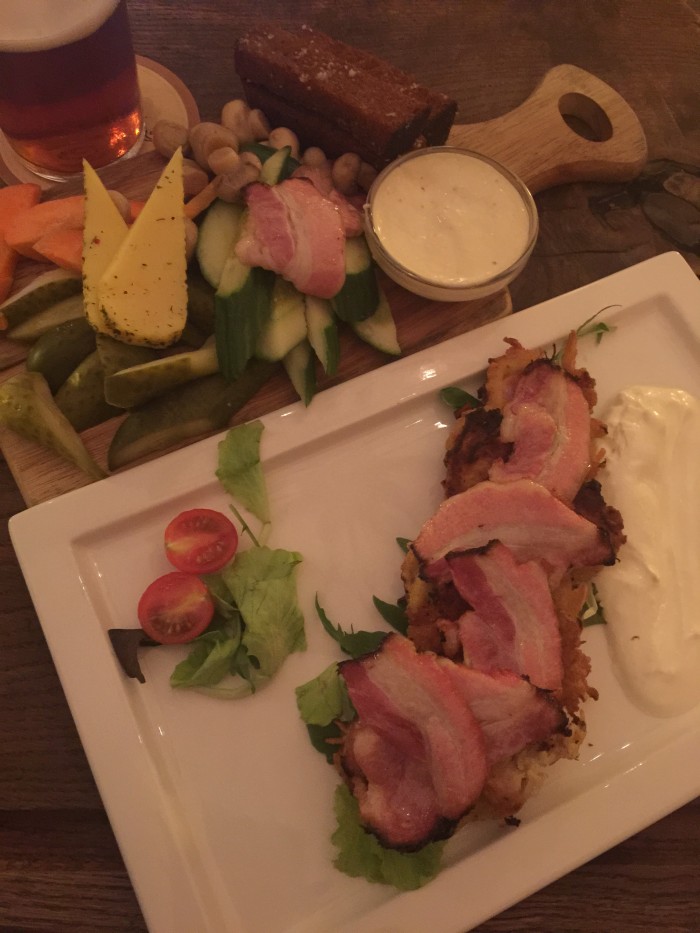 Folkklubs Ala Pagrabs also has the best craft beer selection in Riga, featuring both taps & bottles from Latvian craft breweries such as Malduguns, Aldaris, Viedi, and more. 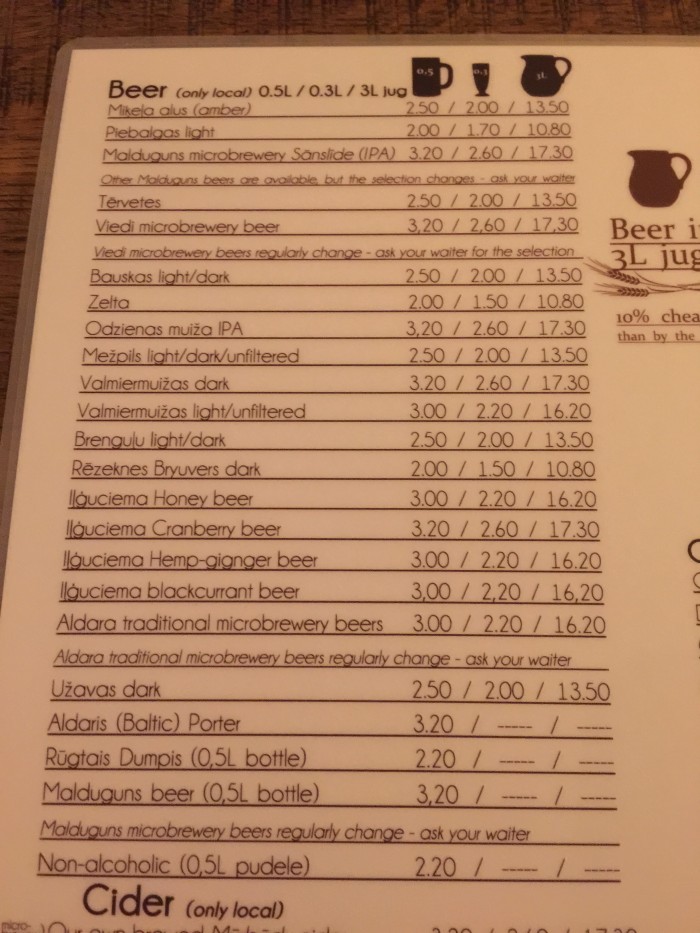 While the bar can get crowded to the point that service suffers a bit, as long as you can get a beer, Folkklubs Ala Pagrabs is a great spot to sit back and have a good time every evening.

Riga’s craft beer scene is just beginning to grow, but with great bars such as Folkklubs Ala Pagrabs and quality nascent breweries such as Alus Darbnica Labietis, the future of craft beer in Riga is bright.

Looking for a place to stay in Riga? Check out these Riga hotel & AirBnb options!

Riga also has plenty of things to see & do in between drinking beer.