As coverage of the English Premier League in the United States has improved, I became a bigger fan of the sport & the league. After a couple of years of not choosing a particular team to become a fan of, a few years back I finally picked a favorite team: Arsenal. During my trip to London over the holiday period last year, I was finally able to attend an Arsenal match at Emirates Stadium. Actually, I was able to go to see Arsenal play at Emirates twice thanks to two home matches being played in a week.

I had no problems getting tickets to see Arsenal at Emirates. Just to be sure, I became a Red member of the team in order to secure tickets for a couple of matches. As you can see below, tickets go on sale to Red members about a month before each match. 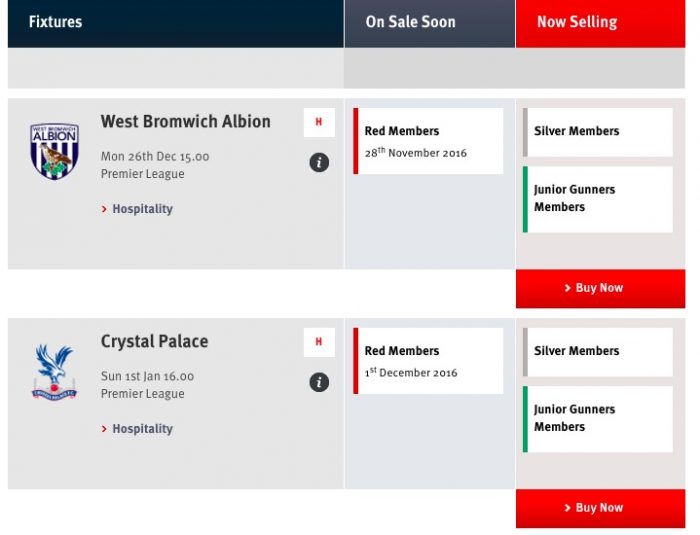 Since I knew I wanted to attend two matches and didn’t want to risk missing out, I purchased an Arsenal Red Lite membership for 38 quid (including all fees). 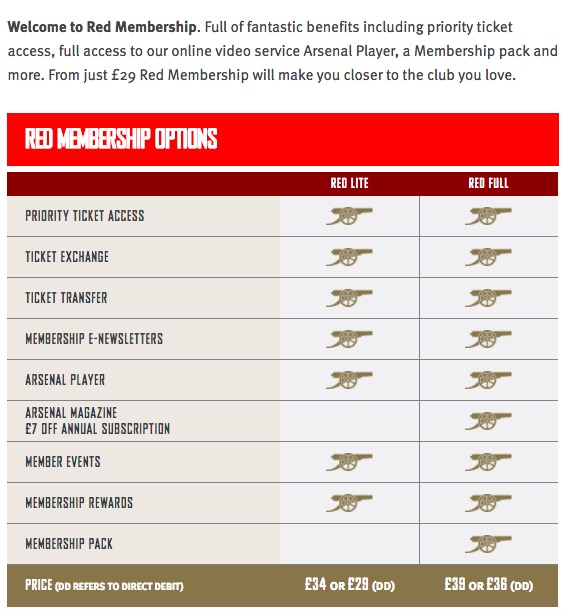 Tickets for each match were easy to buy. For the Boxing Day Arsenal v West Bromwich Albion match at Emirates Stadium on Monday, December 26, 2016, I paid £49.50 for a ticket in the North End. For the match against Crystal Palace on New Year’s Day, I paid a little bit more (£52.50) for a seat a couple of sections over in the same area. 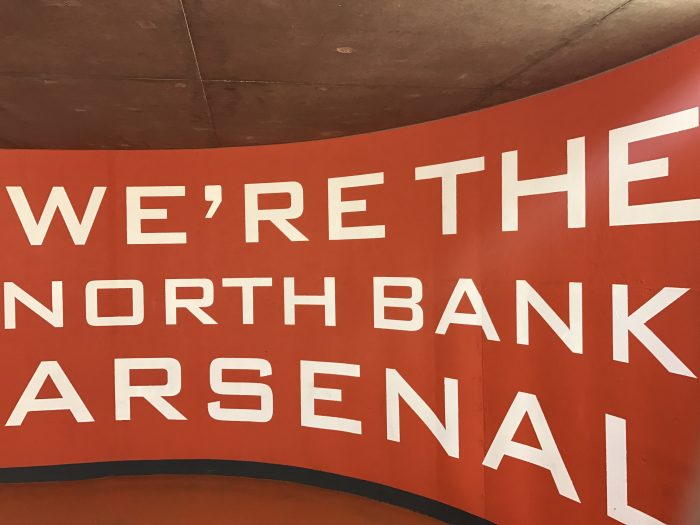 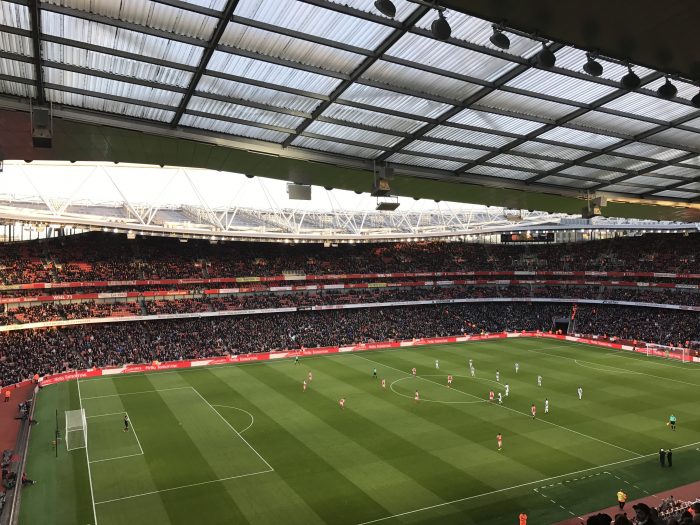 In both cases, there were some tickets available in other sections, though not many. I don’t know how easy it is to get Arsenal tickets if you’re not at least a Red member, so if you can spare the membership fee, it’s worth it to guarantee that you get in. Of course, tickets for Cup matches & Europa League matches are easier to come by.

With my tickets secured, I had nothing to worry about on match day. For the first Arsenal match I attended at Emirates, vs. West Brom, I chose to walk from my hotel near King’s Cross through Islington to Highbury, stopping for some food on my way to the stadium. It’s not too bad of a walk, and certainly a nice option if it’s a nice day and you’d like to get some exercise and not deal with possible crowds on the Tube.

Otherwise, Emirates Stadium is easily accessed by Tube or train. Note that the Tube stop closest to Emirates, Holloway Road, is closed on match days. Arsenal is unsurprisingly the closest active station if you’re traveling to a match. Otherwise, you can also go to Highbury & Islington or Finsbury Park. 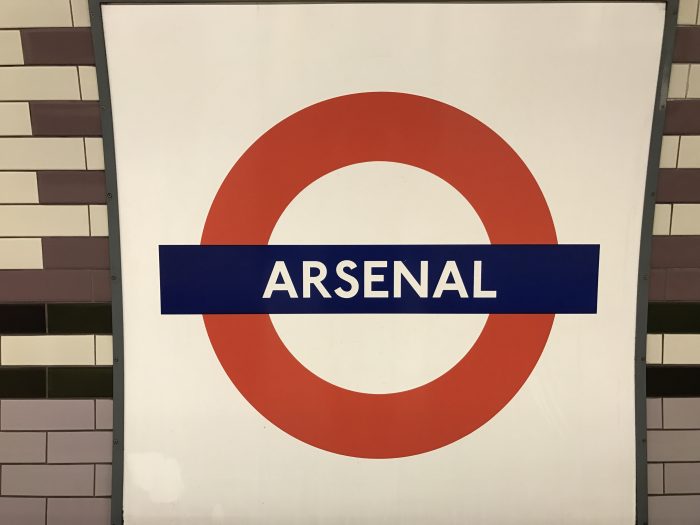 I got to Emirates Stadium fairly early for the first Arsenal match I attended. I wanted to walk around the grounds as well as the inside of the stadium. It was a cold, but sunny day. 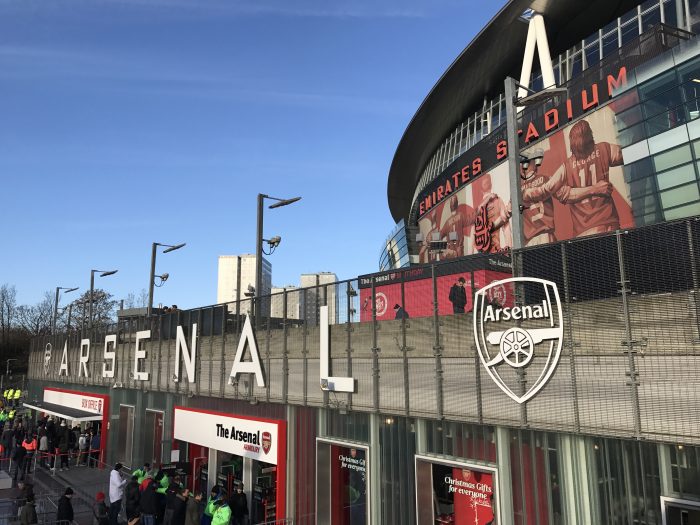 Outside, there are several good photo spots, including a few statues dedicated to important Arsenal figures such as Thierry Henry, Dennis Bergkamp, Tony Adams, and Herbert Chapman. 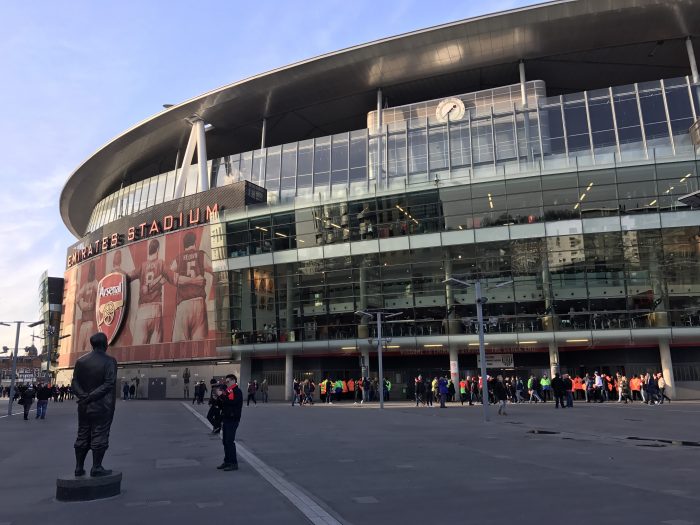 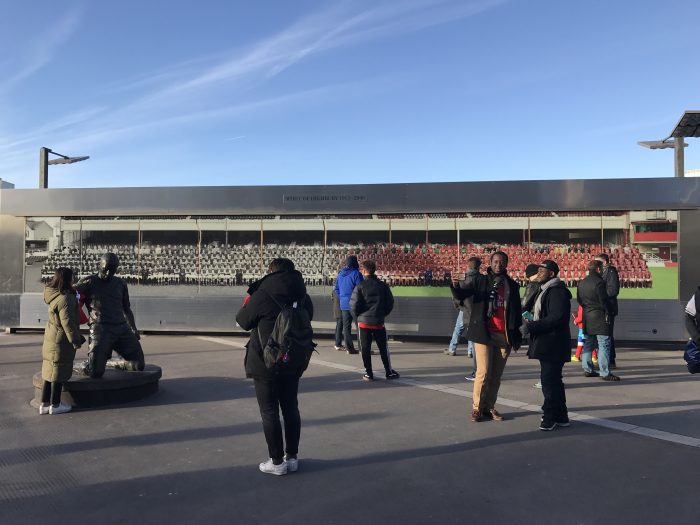 I also bought a scarf in the team shop attached to the stadium. 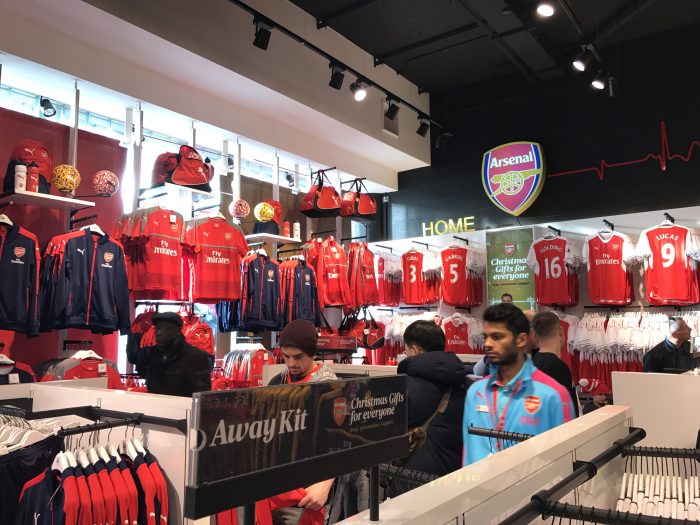 After walking outside, I scanned my membership card at the turnstiles and headed into Emirates. 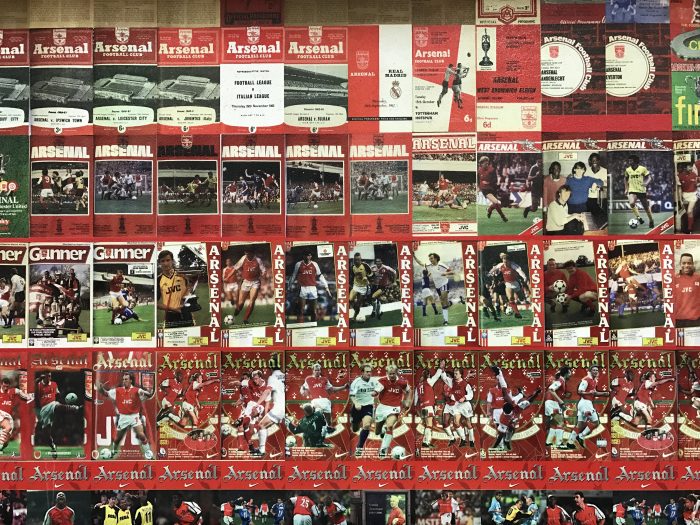 Inside the stadium, there were a couple of surprising things, since I hadn’t attended a Premier League match before.

First, beer was available inside. I’d been under the impression that alcohol had been banned from grounds in England, but apparently it’s now being allowed again. If you’re at the match early enough, there’s a solid deal where you can get a pie and a pint for just £5. I made note of this and had it when I went to my second Arsenal match at Emirates later that week. 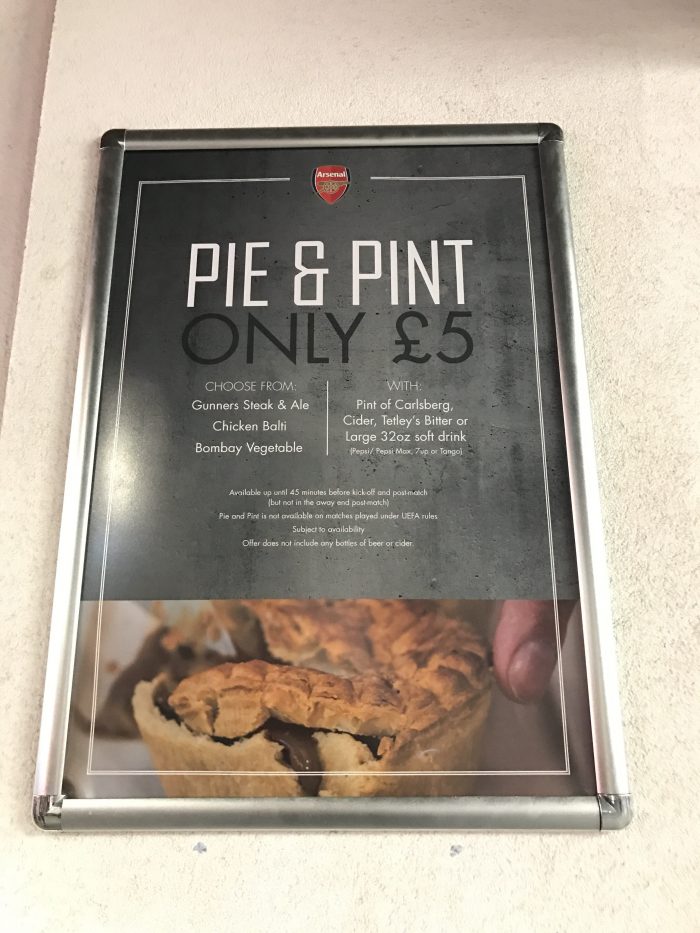 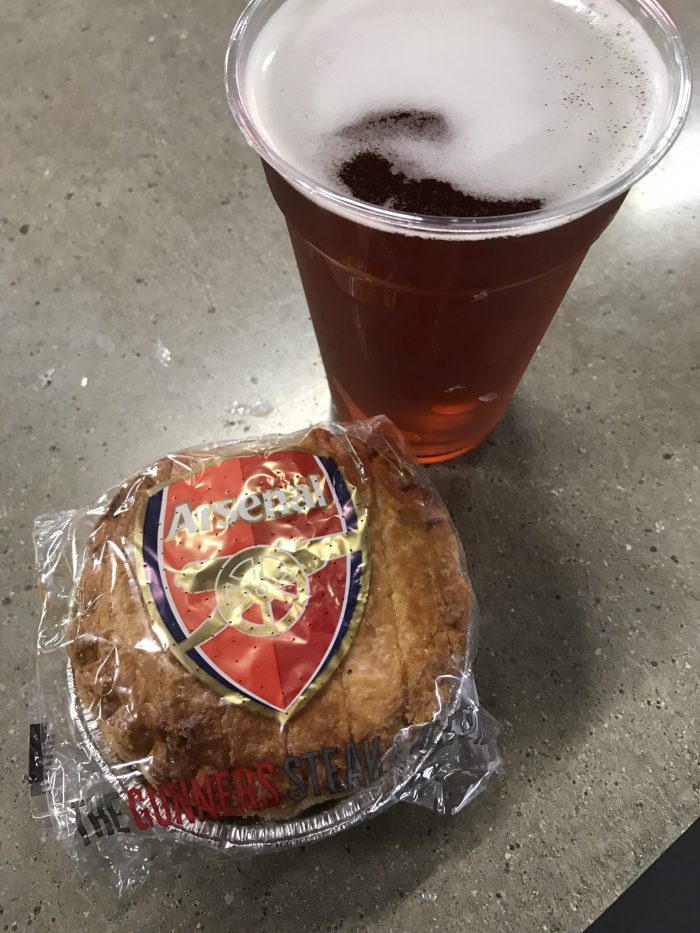 The other thing that I found interesting is that betting is allowed inside Emirates. Not only is gambling on sports highly restricted in the United States, I can’t imagine it ever being permitted inside a stadium. 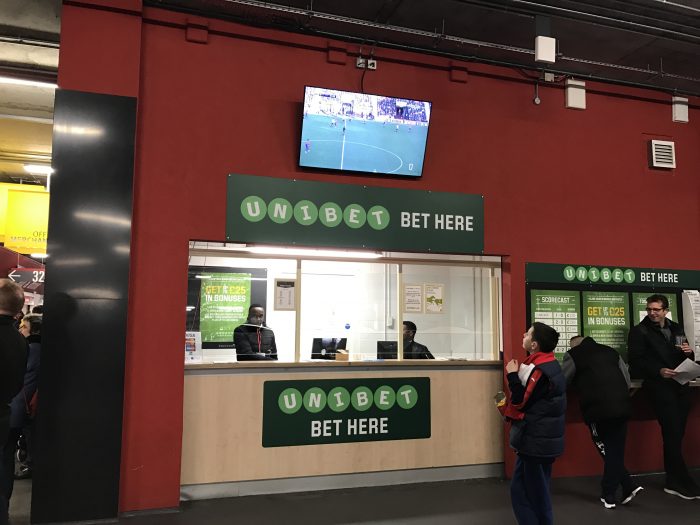 Finally, the match began. It was nervy going for much of it. Arsenal had several great changes stopped by West Brom goalkeeper Ben Foster. From the start, it seemed like West Brom were hoping for a 0-0 draw. Finally, Olivier Giroud broke the deadlock with a header in the 86th minute. Here are the highlights from the match.

Finally getting to go to an Arsenal match at Emirates Stadium and leaving with everyone serenading Giroud to the tune of “Hey Jude” was a lot of fun.

Next up was Crystal Palace on New Year’s Day. It was raining, but thankfully my seat was well underneath the roof, so it was dry. 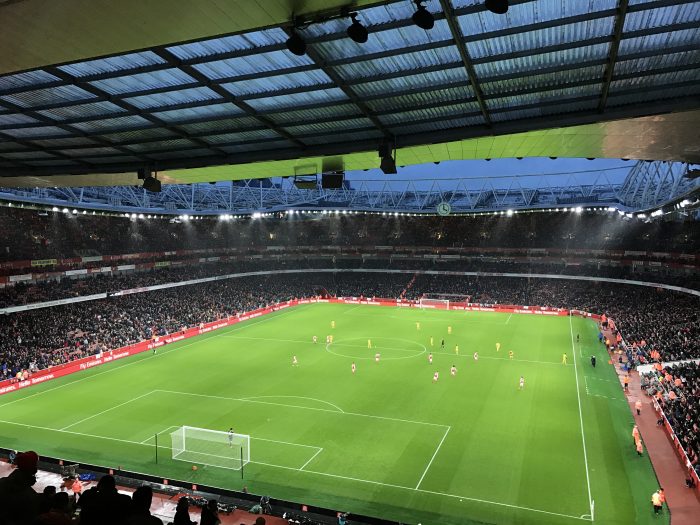 This second Arsenal match I attended at Emirates Stadium also featured a Giroud goal. And what a goal it was. It would go down as one of the best goals scored anywhere that year.

Unfortunately, I was at the other end of the stadium. It was only when I pulled up the video at halftime that I realized just how amazing it was. We knew something special had happened, but we didn’t realize just how amazing Giroud’s scorpion goal was.

Arsenal would go on to win 2-0. Here are the rest of the highlights.

Following the matches, it was easy to leave. There are some queues heading into the Arsenal tube station, but they move fairly quickly. Less than 45 minutes after the first match ended, I was drinking a pint of craft beer in central London.

If you’re a fan, attending an Arsenal match at Emirates Stadium is at the top of your bucket list. With a bit of planning, it’s pretty easy to get tickets & have a fun day out cheering on the team. It’s especially nice when they win twice like they did when I went!