About a month ago, I traveled to Pittsburgh for work. While I spent most of the week working, I did get to check out some of the city.

Where to stay Pittsburgh South Side

I stayed at the Hyatt House Pittsburgh South Side for a week. My room was on the ground floor, which initially worried me, but fortunately it was at the far end of a hallway so there was no noise. The room itself had a living room that was separated from the bedroom area by a partition that included the TV. The TV could be rotated around to either area. The channel selection was impressive, as they had a full range of DirecTV. The WiFi was also fantastic. It was easily the best I’ve seen in any hotel. Given that the hotel is very new, it’s evident that they put a huge emphasis on this. Each morning, there was a breakfast buffet with an omelette bar, plus either sausage or bacon (sadly, the bacon only appeared on one of the days I went), french toast or pancakes, fruit, juices, other pastries, yogurt, and cottage cheese. It wasn’t bad at all, though I was certainly tired of it after a week, even though I hadn’t gone there every morning.

Though I didn’t have a ton of time for sightseeing, I did have one full day where I was able to explore the city. I’d never been to Pittsburgh before, so I took full advantage of my free Saturday.

The weather certainly could have been much better. It was overcast for the entire day. The morning started with rain, which suited me just fine because I had arrived on a Friday night and was jet lagged, so I had no desire to be out early. I finally left my hotel around noon, not long after the rain had stopped. It did continue to mist for most of the rest of the day, but never so much that it was an issue.

A walk along Pittsburgh’s South Side

I started off the day with a walk toward downtown from the South Side. For the most part, Pittsburgh has done a nice job of building walking & cycling paths along its three rivers. The south side is undergoing a rebirth after its former steel past. The areas that were formerly steel mills are now filled with shopping, restaurants, offices, and bars. That said, you can still tell that it was very much an industrial area, as trains still run frequently through the area, and the city has left artifacts from the steel industry in the park areas that line the Monongahela River. 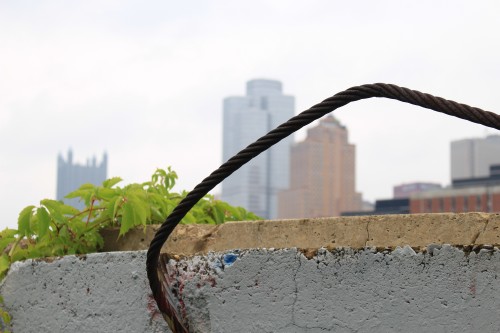 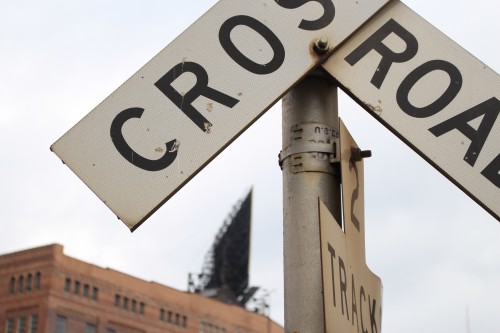 At one point, the nice path stopped semi-abruptly, and there were signs directing pedestrians across railroad tracks and down past some industrial plants along those same tracks. That path wasn’t nearly as nice as the rest of the walk, and it was made especially unpleasant by the train full of garbage that passed me while I was walking. There was nowhere to escape to, so I had to stand there as about 30 or 40 cars of trash blasted their stench into my face as the train rolled by.

I crossed toward downtown on the Smithfield Street Bridge, one of the few bridges in Pittsburgh that is not entirely painted yellow. 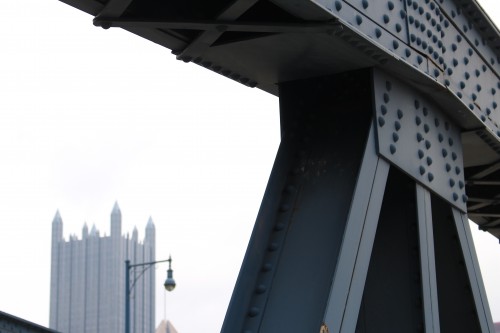 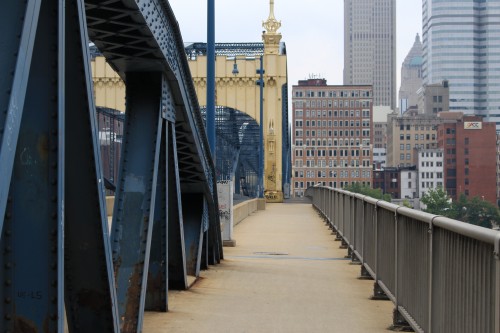 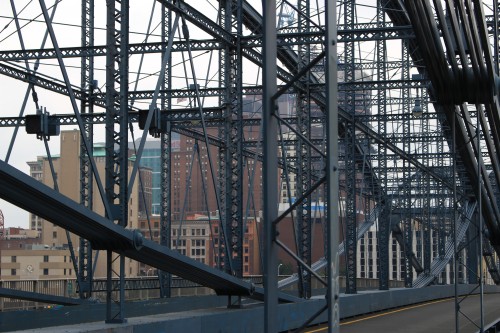 From downtown, I headed toward Point State Park, AKA The Point, home of Fort Pitt. I was disappointed to see that nothing of the old fort still exists, aside from a reconstruction. There is one original building remaining nearby, called the Blockhouse, but it was closed even though it was supposed to be open. Bricks marking the site of Fort Duquesne, the original fort in the city, can be found in the park, but otherwise it’s unremarkable.

There is a fountain near the end of the Point, in case the mist coming from the sky is not getting you sufficiently wet. Beyond that is a plaque denoting the confluence of the three rivers, the Monongahela, the Allegheny, and the Ohio. I’ve always found it weird that they consider it to be three rivers meeting, as it’s really just two rivers that meet, and then someone decided to give the river a different name from beyond that point. 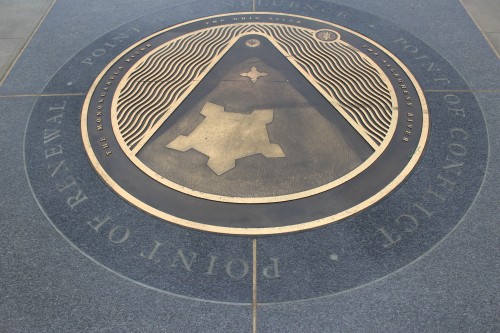 A visit to PNC Park

From there, I crossed the Allegheny toward PNC Park, walking across the Roberto Clemente Bridge. At the end of the bridge, right next to the park, sits a giant statue in memory of the Pirates great. I would return to the ballpark 2 days later to see a game between the Pittsburgh Pirates and Los Angeles Dodgers. Unfortunately, the Pirates lost. I had a Primanti Brothers sandwich for the first time, which was decidedly underwhelming, but at least I can say I’ve had one now. The views of the city from the ballpark are amazing, though we were distracted from both the view and the game by the massive insects that were descending upon everyone. The bugs were called mayflies, and while harmless individually, they can create a road hazard when they swarm, which was the case further west around the same time. 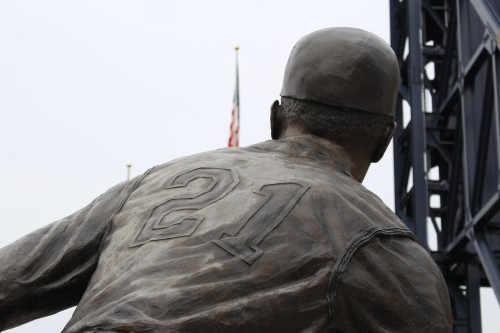 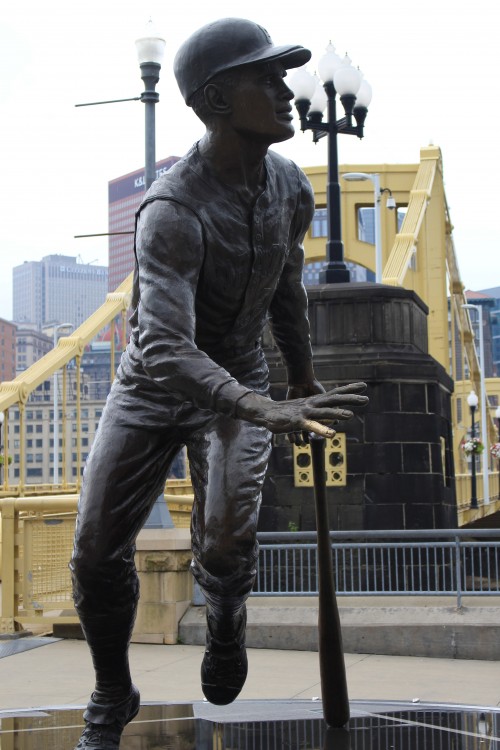 A visit to the Andy Warhol Museum

Back to sightseeing, my destination that day was the Andy Warhol Museum. A native of Pittsburgh, the city has gone all-out to honor Warhol. The museum is the largest in the United States that is devoted to a single artist. I went into the museum not remembering a ton about Warhol beyond his Campbells soup cans and work with the Velvet Underground, but quickly realized his massive influence on modern pop culture. The museum is set up in a way where you start at the top of the museum, then work your way downward, with each floor devoted to a different decade of his life. There were even drawings that had been done by his mother.

My favorite spot was the music & video room featuring Warhol’s masterwork with the Velvet Underground, the Exploding Plastic Inevitable. You can see a video of it below, though it doesn’t come close to matching the actual experience. Other highlights included his video archives & interactive art space where visitors could toss giant mylar pillows toward fans that would blow them across the room. And yes, the cafe did serve soup, I checked.

A visit to the Mattress Factory

After the Andy Warhol Museum, I headed toward another modern art museum on the North Shore called the Mattress Factory. The museum features contemporary art installations. Unfortunately, about half of the museum was closed because new pieces were being installed, but they did offer a 50% discount on admission as a result, which was nice. A lot of museums would try to get the full admission fee. The most interesting installation spanned 2 floors. It’s impossible to show through a photo, so you’ll have to settle for a description (or go see it yourself). Essentially, the artist constructed a wooden tunnel that looks downward through the floor below, out a wall, and into someone’s backyard across the street. The staff member who was in the room said they didn’t know much about what the owner of that backyard thought of the whole thing, though she did say that his backyard became much cleaner and nicely landscaped after it was put in.

Now that I’d been to 2 art museums, it was time for an early dinner. I had some soul food at Carmi Family Restaurant. After some shrimp & grits, mac & cheese, and cornbread, I was ready for my plans for the evening: the Pittsburgh Beer Fest.

A visit to Pittsburgh Beer Fest

The Pittsburgh Beer Fest is an annual event held at Stage AE & the parking lots next to Heinz Field. This year’s beer fest featured over 250 different beers from over 80 different breweries. Best of all, the event benefited local animal rescues, so it was all for a good cause.

Over the course of the night, I sampled at least 30 or 4o different beers, mostly from the Pennsylvania and the surrounding states. The highlight was easily DuClaw’s Sweet Baby Jesus, a delicious chocolate peanut butter porter from Maryland.

Following the festival, it was impossible to find a taxi or bus near by since the Pirates game at PNC Park was letting out around the same time. Instead, I took a bridge back to downtown, and found myself following another bridge back to the South Side. I started the walk figuring that I would get to some place that was less busy where I could get a taxi the rest of the way. Once I was on the South Side though, I didn’t mind walking more, so I headed in the direction of my hotel.

At some point on my walk, I veered just slightly south of the street I was expecting to take back, and instead ended up heading a little bit up into the hills above. It wasn’t a big deal, as I was still generally heading in the right direction, though I was unnecessarily walking uphill. I discovered my error when I noticed the area near my hotel below me, so I figured I’d cut through a park to get myself where I needed to be. There was only one issue with this: the park was actually a dead end, which I learned when I reached it and found that I was surrounded by tall grass and houses on all sides. I backtracked (all in a light mist, of course), and continued along the street. At this point I finally took out my phone and used a map to get myself back to the hotel, since I didn’t want any more surprises.

When I arrived back at my hotel, I checked my Fitbit, which I use to keep track of how much I walk each day. I had walked a total of 18 miles that day. Needless to say, I spent Sunday relaxing.