Despite being the 3rd largest city in Spain, Valencia is often overlooked by visitors. That’s a shame because it’s a lovely place, a straddling mix of historic sites & modern architecture. Like Barcelona, it’s on the Mediterranean Sea, so winters tend to be palatable & quiet. Valencia also has a nice selection of places to drink beer. While there aren’t a ton of breweries in the city at the moment, there are many great beer bars & bottle shops. Here is my guide to the best craft beer in Valencia, Spain.

Valencia’s Ciutat Vella (Old City) is packed with bars & restaurants. Thanks to its narrow, winding streets, it’s not the easiest neighborhood to find your way around, but that just makes it all the more charming. Tucked down an alleyway near the Central Market is The Market Craft Beer. 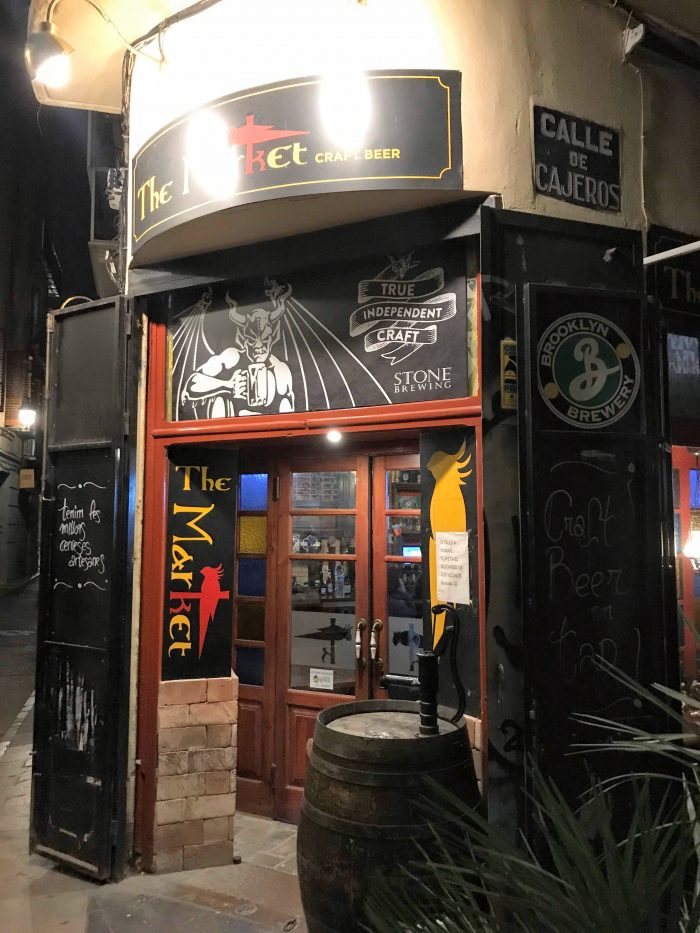 The Market Craft Beer feels like an old Victorian pub in London or Dublin, but don’t let that fool you. The beer selection is about half Spanish, featuring 8 taps and a selection of bottles. The selection isn’t huge, but it’s high quality. They also serve some small snack dishes. 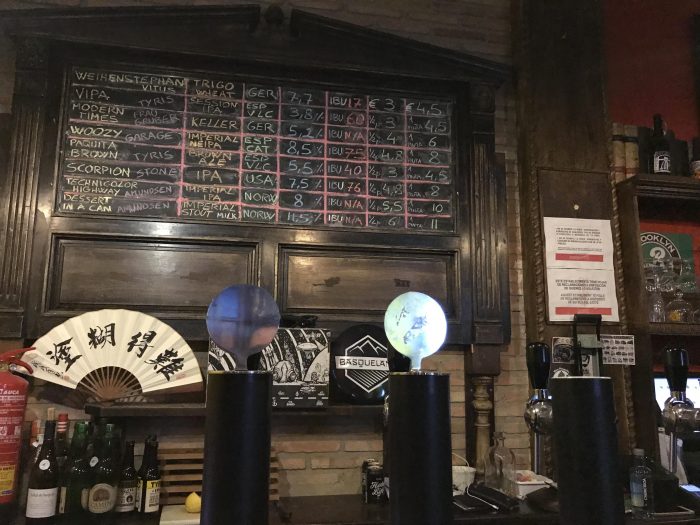 It’s alternately a quiet & a lively bar, the sort of place that can’t help but invite intimate-but-animated conversations in its little wooden nooks. Whatever the vibe might be on a particular night, it will still be a good time. 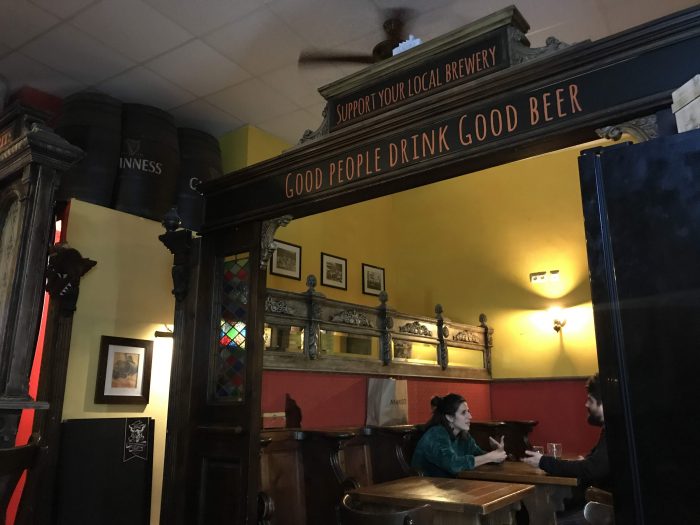 As it should be for a bar that’s blending cultures & atmospheres, the music at The Market Craft Beer is an eclectic mix that on various nights ranges from ska jazz to Motown-style covers of 90s classics from bands such as Radiohead, The Cranberries, & Coolio.

The Market Craft Beer is a great beer bar, & I enjoyed the place so much that I went there 3 times during my stay in Valencia.

Olhöps is a beer bar & bottle shop located near València Nord train station. The bar has 10 taps, including a house beer from their brewery, H2OL (more on that below), and a couple of others from Spain. When I visited, the rest were from the U.K., though this was helped by the Northern Monk tap take over that was going on at the time. There’s also a selection of over 100 bottles & cans available. 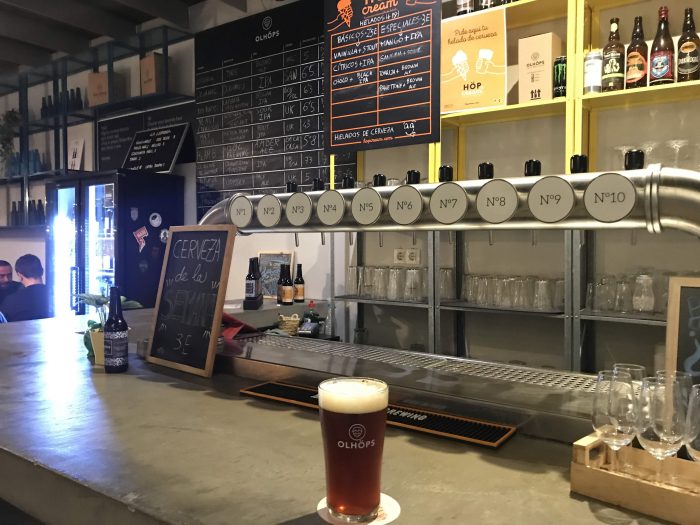 The British tap takeover was aided by the music that was being played, with Travis, Blur, & Bloc Party all featured along with a few other U.S. indie bands. 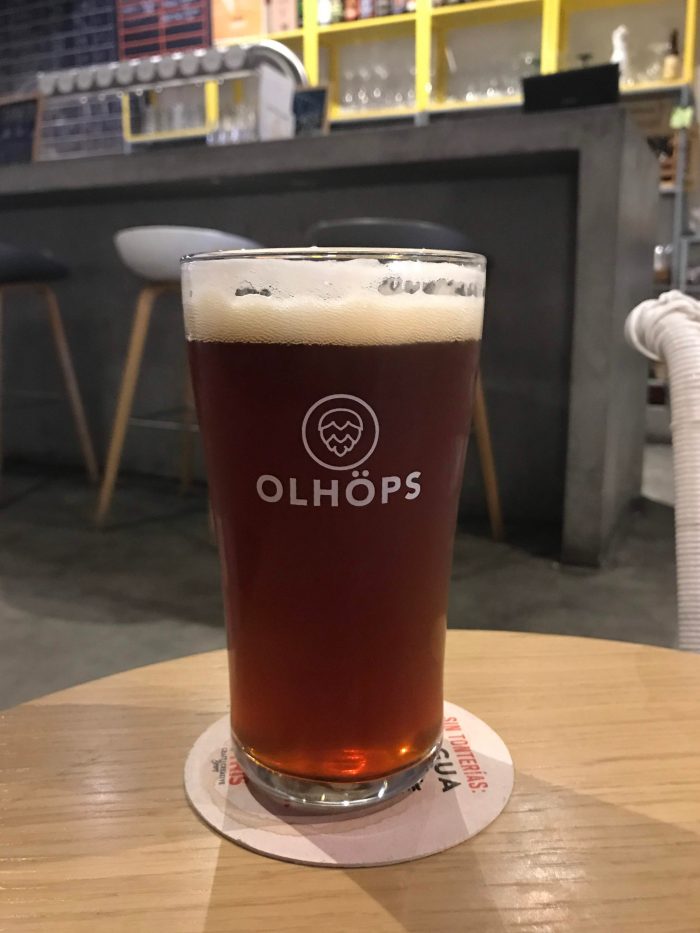 In addition to the bar & the brewery, the same people also run Höp Cream, a project that combines ice cream & beer. These beer floats are available at Olhöps. If ice cream isn’t a sufficient meal, there’s also a food stand that is sometimes open in the back of the bar. 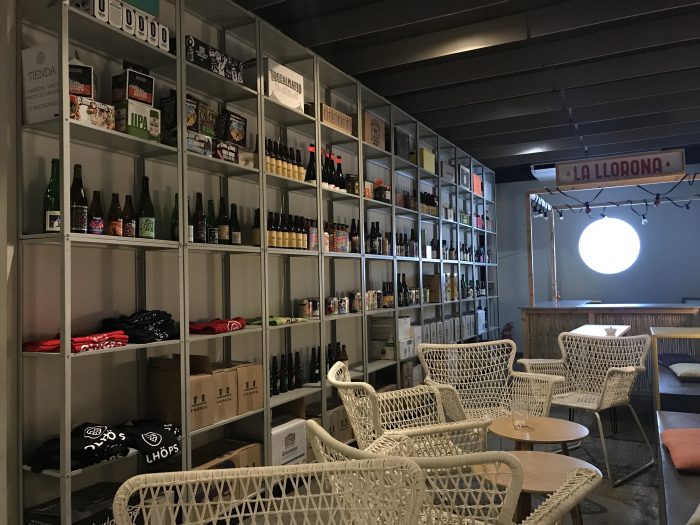 This back part of the bar is where the bottle shop is. It’s also nice & quiet compared to the front area & also has some games, if that’s what you’re looking for. But wherever you sit, Olhöps is a pretty relaxing, laid back place.

In the lower level of the Mercado de Colon, a market that now houses an array of bars & restaurants, you’ll find Las Cervezas Del Mercado. 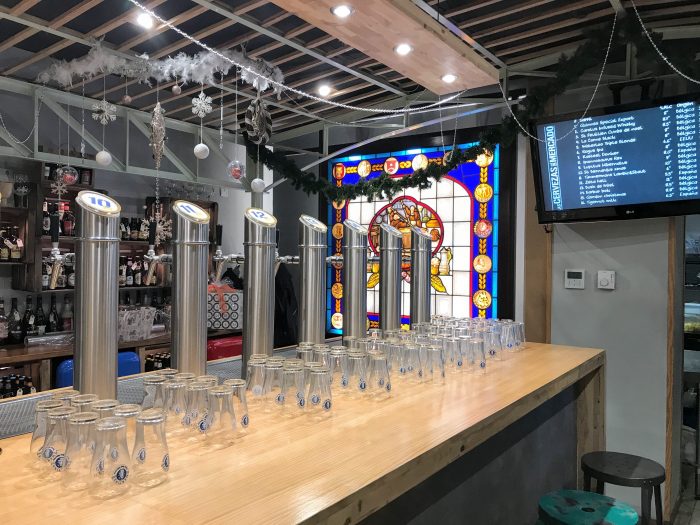 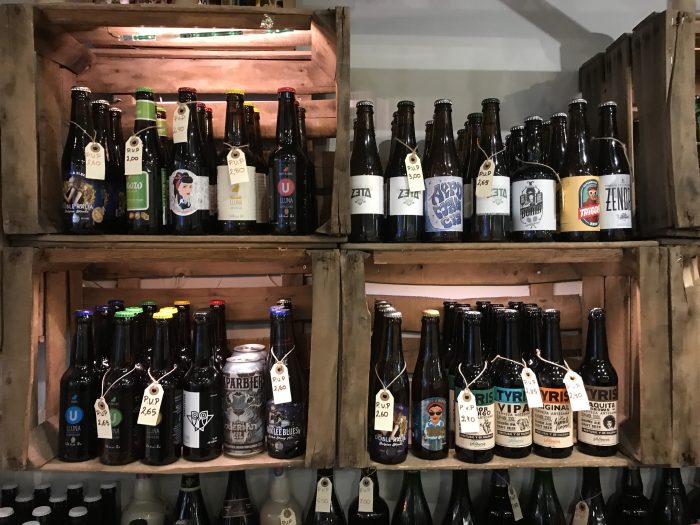 The beer selection leans heavily Belgian, at least as far as taps go. When I visited, the mix was 12 Belgian taps, 3 Spanish, and 1 American. The bottle selection has many more Spanish selections. The draft beers are on the pricier size, since they are half pint pours, but to be fair, most of the beers tend to be stronger & are imports.

Urban Bar is a small, friendly bar located in a trendy part of Valencia known as Gran Via. It’s a quieter area away from Ciutat Vella, with much more of a neighborhood feel to the local bars & restaurants. The outside patio is probably bigger than the bar within, but inside you’ll find a selection of cans & bottles, along with wine. There are many Belgian beers, but also a good selection from Spain. 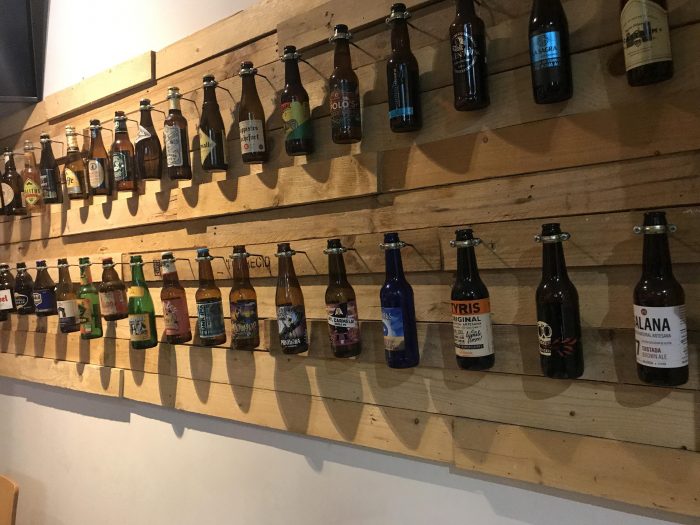 The guy running Urban Bar was friendly & was happy to practice a bit of Spanish with me, so we bounced back and forth between our two languages. There’s a tapas menu that also includes arepas. They were also playing the blues inside, unlike the place mentioned below that actually has “blues” in their name.

If you’re a traveler, there’s no way you’ll be skipping a place called Beers & Travels Bar. It’s located in a central area of Ciutat Vella & between the location & the name, it can easily draw crowds of visitors. 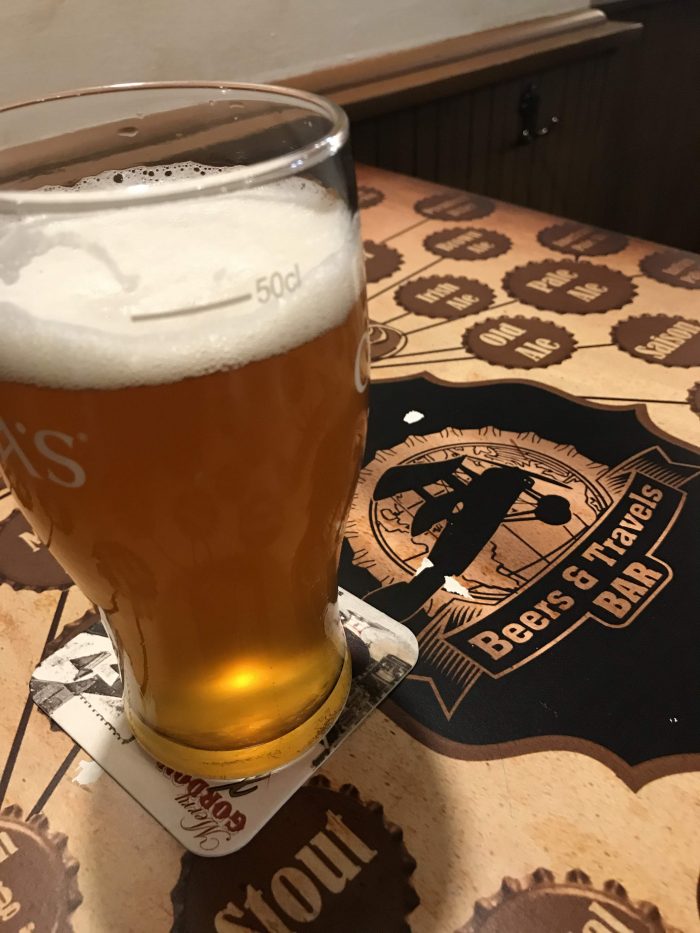 Inside, you’ll find 19 taps and 80 bottles, though the depth of selection varies. There’s a lot of low quality beers such as Miller, but if you dig deep through the lists & look closely at the draft board, you’ll find some local beers including Alegria, a brewery just south of Valencia, as well as some from other decent breweries such as BrewDog. 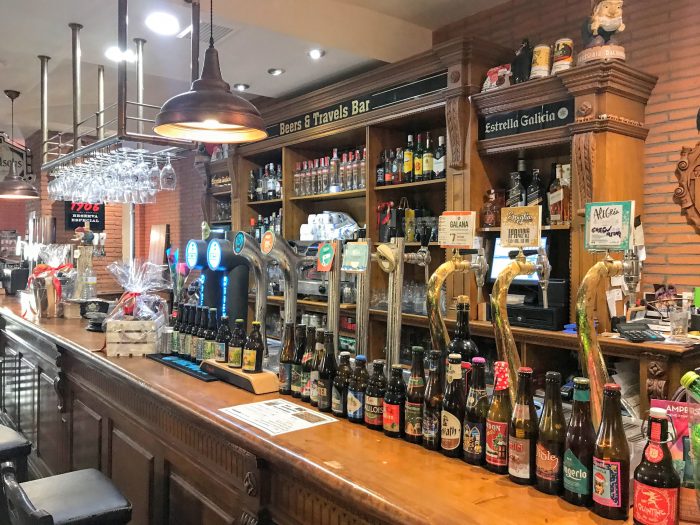 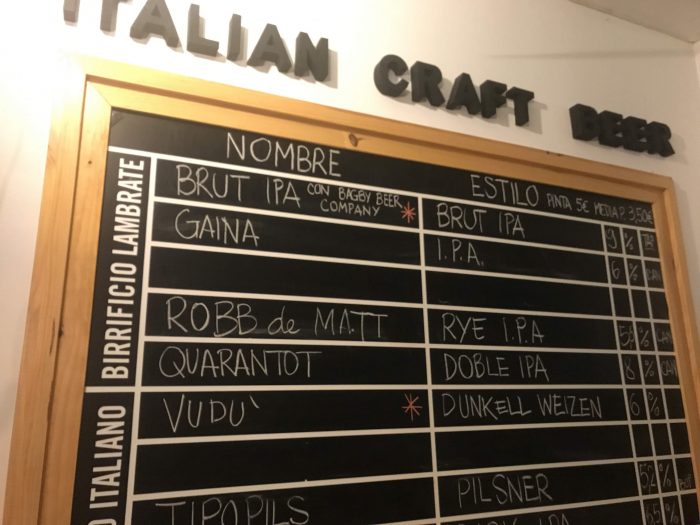 The food menu is a mix of Italian & Spanish, and in the early parts of the evening, you’ll find free snacks out. Locals from the Russafa neighborhood have made the bar a busy family happy hour spot.

Despite the beers being imports, prices are more than reasonable. Throw in the snacks, plus a friendly guy named Giovanni, and RUZANUVOL is a good spot for beer drinkers on a budget in Valencia.

It’s not likely that many visitors to Valencia will find themselves in the southwestern part of the city that The Hops is located in, but if you find yourself here, it’s a decent beer option. There’s a selection of a couple of dozen Spanish bottles, 1 Spanish tap, plus oddly, Founders All Day IPA.

The best breweries in Valencia, Spain

Like Olhöps above, Olhöps Craft Beer Lab (H2Öl) features beer from their own nomad brewery, H2Öl. They have 9 taps of beer, about half of which are their own, plus a fridge with over 100 cans & bottles. They also have ice cream & beer floats, plus bar snacks. 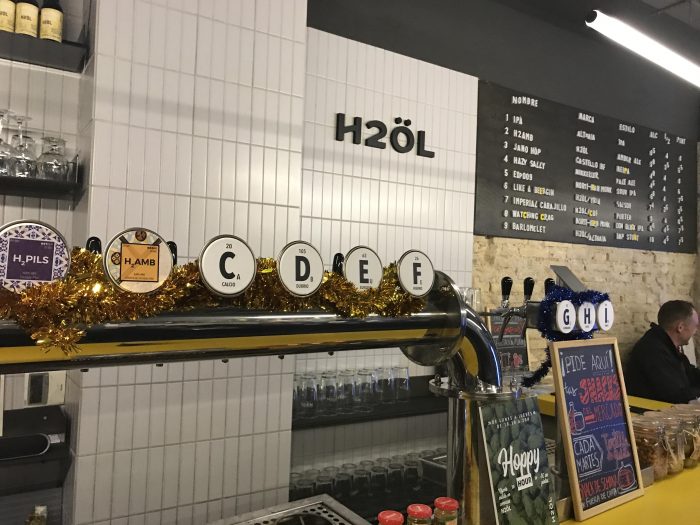 It was here that I had one of the most interesting beers I tasted in Valencia, a beer called Imperial Carajillo “Cremaet” that H2Öl brewed in a collaboration with Castelló Beer Factory from nearby Castellón de la Plana. The porter was inspired by the carajillo cocktail, which includes coffee, rum, cinnamon, and lemon rind. It’s beers like this that make going to local beer bars & breweries so exciting while traveling. Every brewery should aspire to this level of creativity.

You can find Tyris beers in several local beer bars in Valencia. Their own taproom & large patio is located in the old city of Valencia, right around the corner from The Market Craft Beer. 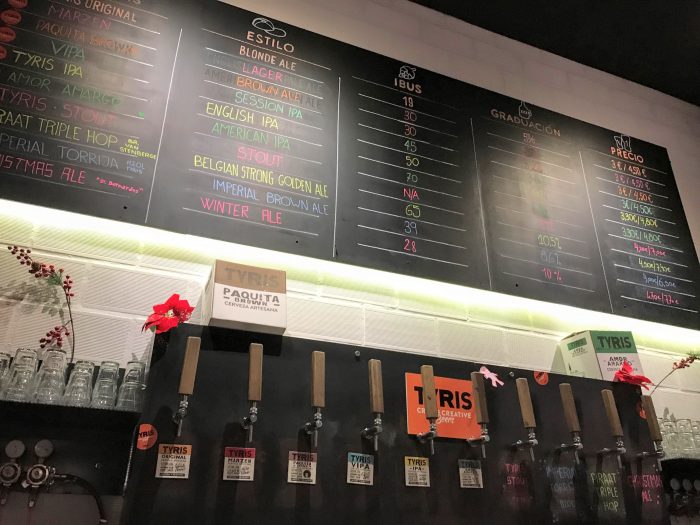 The bar has 10 taps, all of which are their own, aside from a couple of Belgian guests. The selection tends not to rotate, though Tyris does have a few interesting beers, namely one called “Amor Amargo”, which translates to “love hops”. The name reminded me of Amor y Amargo, an excellent cocktail bar in New York City. 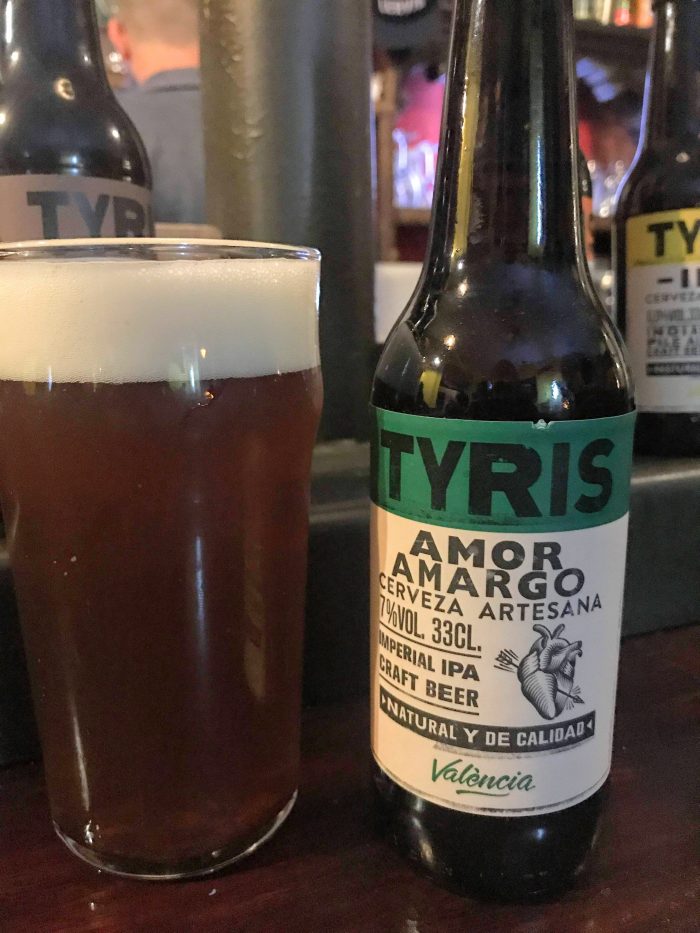 Portland Ale House is a bar that’s been magically transported from Portland, Oregon to Valencia, complete with Timbers Army scarves & Oregon flags. What else would you expect when the bar & brewery are run by Jared Mata, an Oregon transplant? 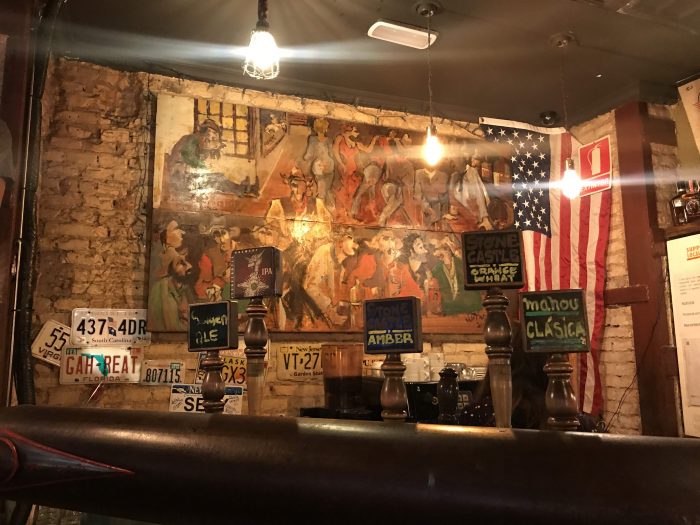 The brewery is called Stone Castle Brewing & Portland Ale House has 6 taps of their beer, along with a full bar.

Despite Birra & Blues not having great ratings, I figured I’d check it out anyway, since it’s one of the few breweries in Valencia. It’s located on a busy corner in Valencia’s Old City & thus doesn’t seem to need to actually have great beer to get people to stop in. They have 14 taps of their own beer to go with a full food menu that mostly has tapas & pizzas.

I thought that I’d at least get to listen to some decent music, since “blues” was part of their name. However, they don’t even get this right, as rather than blues, or even rock, the bar was playing Europop. Eventually, a rock song did come on, and it was “Rollin'” by Limp Bizkit. Needless to say, the atmosphere could use some improvement, as could the beer.

Llúpol is a bottle shop in Valencia’s Ciutat Vella that also serves as a beer geek hangout. On a Friday evening, it was packed with people talking about beer while tasting beers from their 3 taps. Llúpol is the Catalan word for hops. 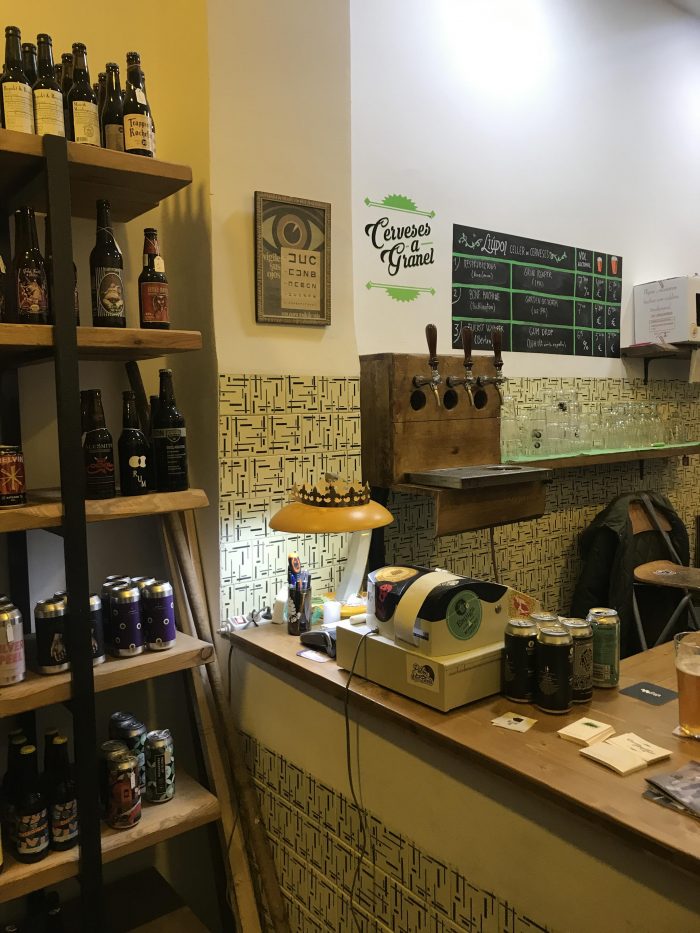 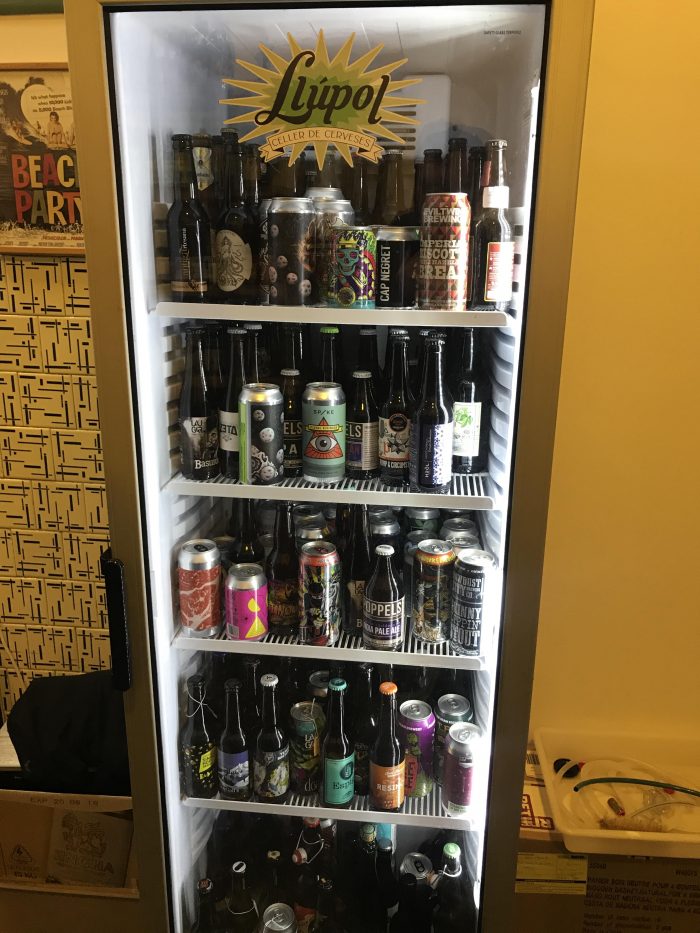 Being a retail shop, Llúpol’s are more daytime-oriented than those of a bar. It’s not open late, and like most shops in Spain, they close in the middle of the afternoon. Visit them during their open hours, and you’ll find a nice selection of Spain’s best breweries, including some local selections. 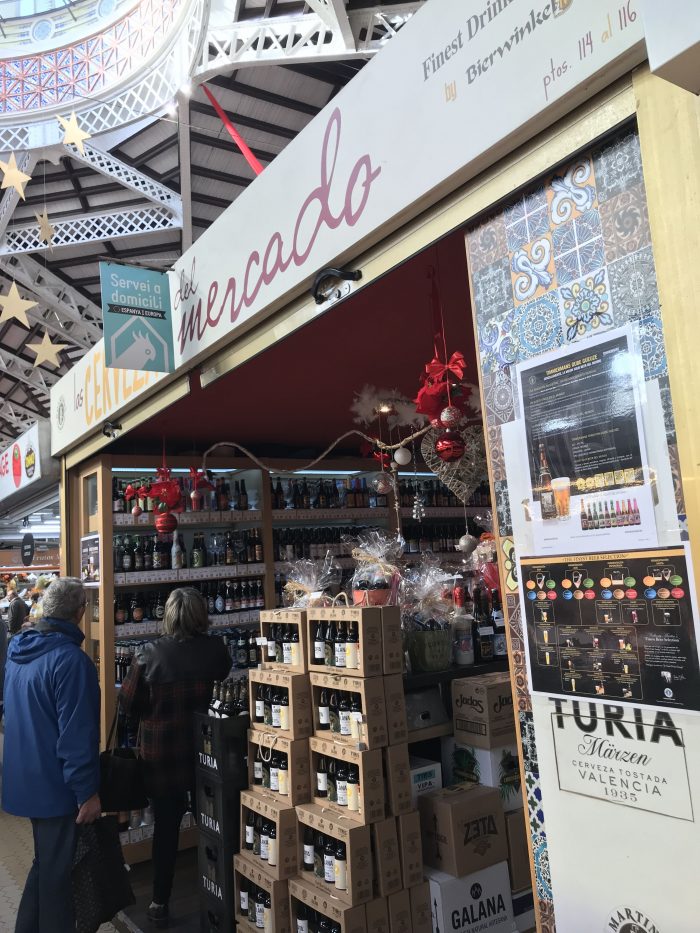 In Valencia’s Mercat Central, you’ll find Las Cervezas Del Mercado by Beerwinkel. There are no fridges are taps here, but they have a selection of hundreds of bottled beers. Many are imported, but they also have a good amount of Spanish beers. They even have a local gift box that makes for a perfect souvenir.

La Boutique de la Cerveza is located in Russafa, near RUZANUVOL. The bottle shop has a huge selection of hundreds of beers, which are also available online. Some of the beers are also in fridges, and there are a couple of tables inside the shop where you can sit and have a drink. It’s a quiet place, like drinking in a friend’s dining room, but they have one of the best selections of bottled beer in Valencia. 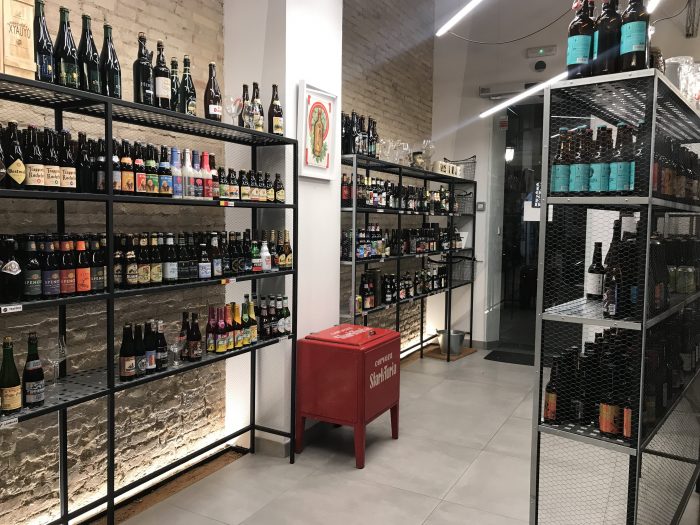 Have you spotted other great places in Valencia for craft beer? Let me know in the comments! 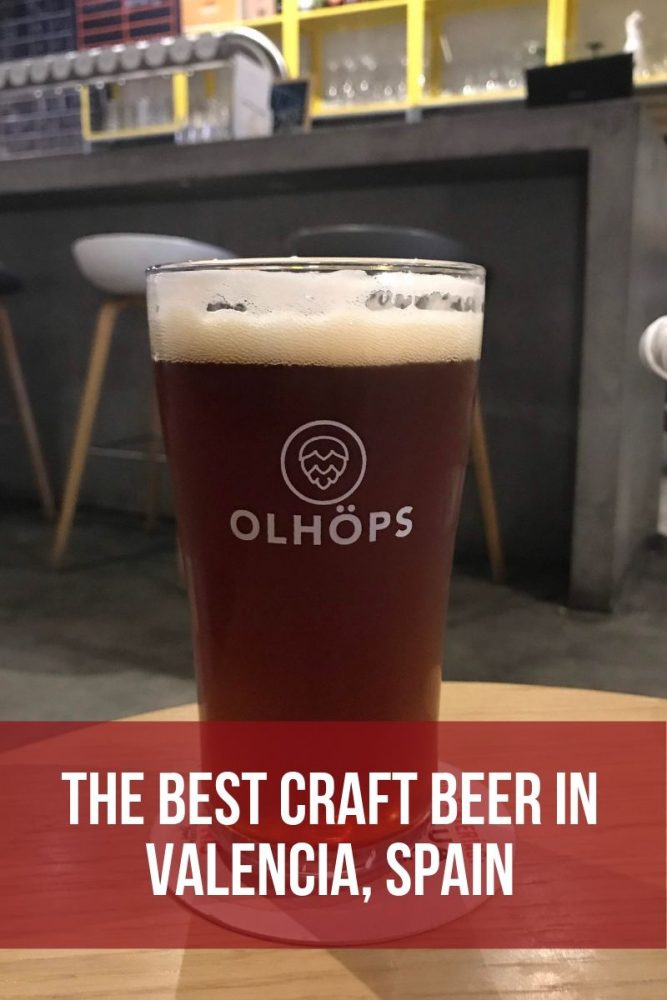