Tono is the hub of Japan’s hop growing industry. Located in the Iwate Prefecture, Tono is a pleasant city to visit if you’re looking for a day trip from Morioka. There are plenty of beer-related activities to partake in depending on the season, including visiting the hop fields, local craft breweries, & taprooms. Here’s my guide to the best craft beer in Tono, Japan.

Tono Brewing Company is Tono’s newest & fastest-growing brewery. Their brewery & taproom is located right in the center of Tono, just a few blocks away from the train station. As such, it’s rapidly becoming a community hub that is also central to Tono’s efforts to become a craft beer destination. There’s no better place in town for visitors to mingle with locals who have a common love of beer. In addition to the bartenders/brewers, I talked with other patrons, including a guy who worked at Baeren in nearby Morioka. 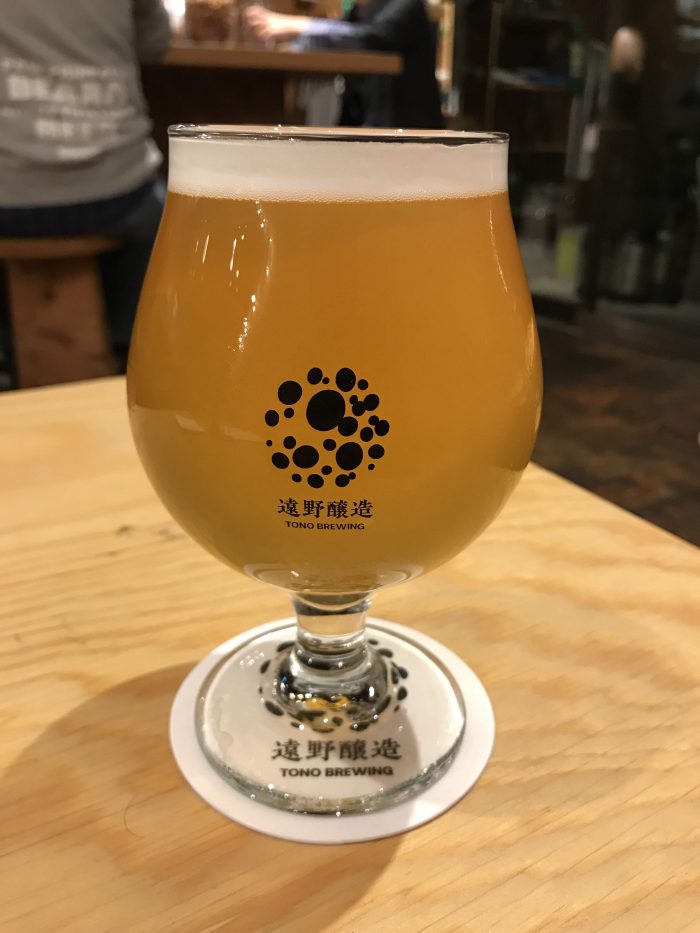 Tono has been brewing since 2017, with the taproom opening a year later. They hope to expose Japanese beer drinkers to more than just traditional lagers. When I visited, the selection included a wheat beer, a couple of IPAs, and a saison, but their rotating range also includes stouts & more. They have even made a beer with actual crickets in it!

In addition to the great local beer, Tono Brewing Company also has a nice food menu. The highlight is the sausage, which is also made from local hops.

Tono is an awesome little brewery. The atmosphere is lively even when the rest of the area is quiet. Even if you aren’t joining the conversation, there’s plenty to enjoy. On the evening I visited, they were playing music from a Japanese band called Special Others, who play an enjoyable combination of rock with a bit of jazz. They sounded a bit like Sunny Day Real Estate to me. One of the songs was called “Saudade”, which reminded me of a cocktail I had with that name when I was in Spain.

Each year, Tono Brewing Company hosts a fresh hop beer festival in late October. Unfortunately, I visited just a few days too early! It’s the best place for craft beer in Tono, so I’d love to go back for the festival someday. 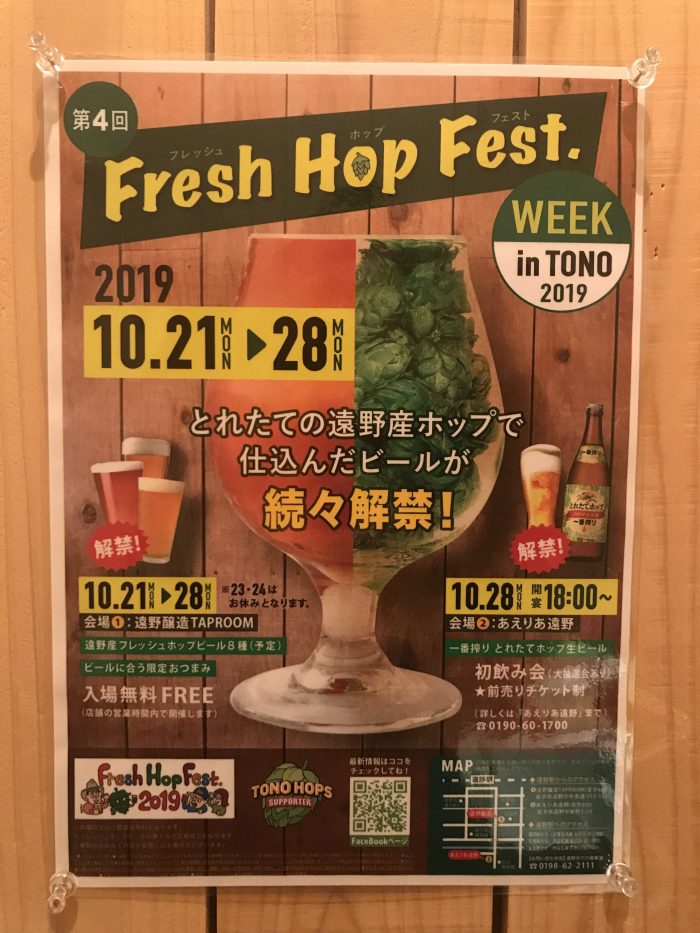 Kamihei Shuzo is a sake & beer brewery that makes Zumona craft beer. The brewery is located a bit outside of central Tono. You can find their beer at many locations around the city, including on tap at Tono Brewing Company.

Tono is home to Japan’s largest crop of hops. Fewer hops are being grown in Tono compared to the past, as younger generations lose interest in farming. However, the collective local industry is trying to reverse this trend by attracting outside attention to Tono as a craft beer destination. The hope is that greater promotion of the uniqueness of the hop fields & attention to quality will lead to a revitalization of the farms. The fields, breweries, Kirin, and other local organizations are all part of a larger effort to promote Tono as a complete beer town. 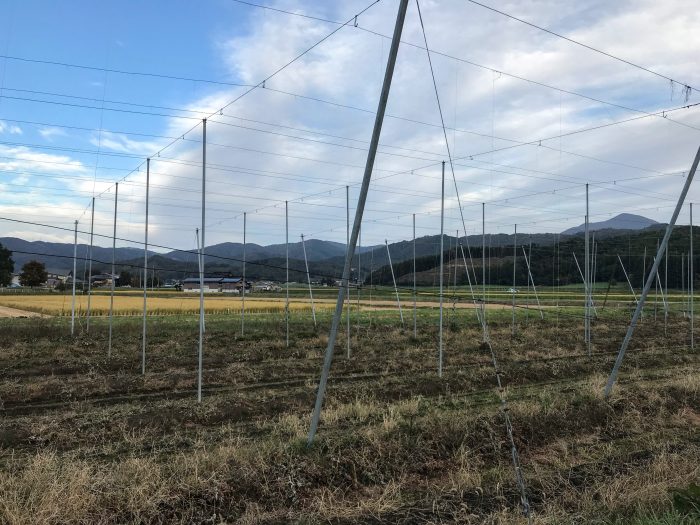 While there are hop fields scattered around Tono, one convenient place to see them is along the walk between the Denshoen Folk Village and Jokenji & Kappabuchi,

While it’s possible to see Tono’s beer industry on your own, what better way to experience it than with experts as part of a group tour? The Tono Beer Experience offers beer tours that vary based on the season. In the summer months, you can drink in the hop fields, taking in in the aroma. As the season turns to autumn, it’s time for the harvest, and along with it, fresh hop beer season. Any time of year, you can go bar hopping in Tono, including at Tono Brewing Company. There are multiple beer festivals in Tono each year, including the Hop Harvest Festival put on by Tono Beer Experience and the Fresh Hop Beer Festival at Tono Brewing Company.

One of the reasons I visited Tono was because it’s also the home of Japan’s hop growing industry. Unfortunately, I’d managed to just miss both seeing hops in the fields & the fresh hop beer festival that was going to be taking place the following week. Still, I enjoyed the beer & hop sausages from Tono Brewing Company!

There aren’t many hop growing regions in the world. To be able to visit one of these places is a rare treat for any beer drinker. As Tono continues to add more beer-related attractions to the city, it’s inevitable that more & more visitors will be attracted to the area, which is already steeped in history & folklore. If you’re a beer fan visiting Japan, go beyond the beer bars in cities like Tokyo, Kyoto, & Fukuoka and see where the hops come from. 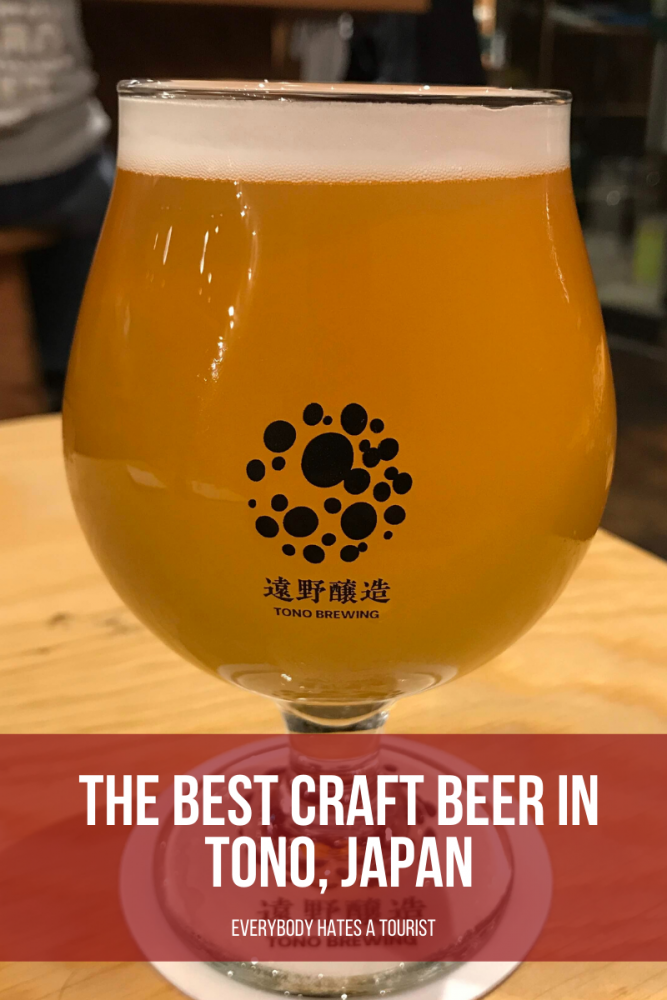