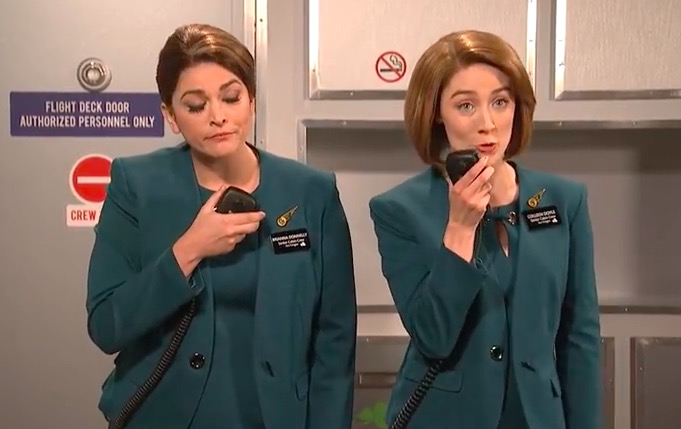 Tonight’s episode of Saturday Night Live was hosted by actress Saoirse Ronan, with U2 as the musical guest. Needless to say, it was a very Irish show.

The final sketch of the night was about a flight on Ireland’s Aer Lingus. Now traditionally this last sketch is known as the “10 to 1” sketch. Since it’s so late in the show, it’s an opportunity for SNL to show something truly off-the-wall or edgy. Tonight’s “10 to 1” sketch was none of that.

Even on an episode that is not great (like this one was), the last sketch can at least draw some laughs, but this fell completely flat. It seems like someone got the idea that they should do something with what “Aer Lingus” sounds like, and then had zero ideas of what else to do with it & threw in every leftover Irish joke they’d mentioned in the writers’ room this week. None of it works.

Oh, and also there are a bunch of dogs. I flew on Aer Lingus back in October, and unfortunately the cabin was not filled with dogs.

Also, to nitpick, I have no idea why anyone would fly from Dublin to Cork to make a connection to New York City.

If you want to see what SNL has been able to do with a similar topic to the first “joke” of this Aer Lingus sketch, watch the “Colonel Angus” sketch starring Christopher Walken, Rachel Dratch, Amy Poehler, & Chris Parnell. Now that was actually clever.