I was well-rested heading into my 5th day of the trip, and for good reason.

I headed to Munich for the opening day of Oktoberfest 2014. As good luck would have it, my flatmate from when I lived in Glasgow also happened to be in Munich for it. I hadn’t seen him for about 8 years, so it was awesome to be able to meet up.

I set off from Garmish-Partenkirchen early in the morning, utilizing the Bayern Ticket again because I knew that I wouldn’t want to deal with tickets on my way back, plus the cost would be the same or less. I met up with Elliot & his lovely new wife at the München Central Station, and we headed to Oktoberfest.

Without hyperbole, I can say that Oktoberfest in Munich is one of the world’s greatest festivals, and something that everyone should experience at least once in their lives, especially if they are a beer fan. 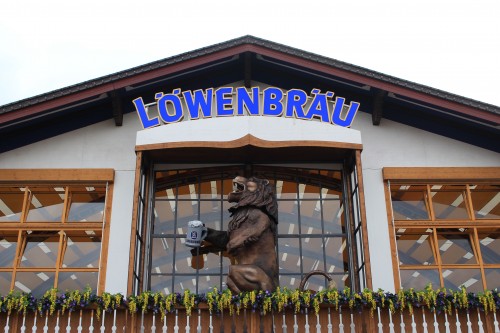 On the first day of Oktoberfest, the festival is started at 12pm when the mayor of Munich says “O’zapft is! (“It’s tapped!”)”, and the first pints are poured from the keg. As a result, people get there early to wait for the first pours. We were at the Lowenbrau tent by 9am, and just missed out on getting a table inside. After about 15 minutes of frantic requests to sit at tables that were being saved by people, we headed outside. The weather was threatening rain, but after a group inexplicably left a table that was completely covered by an overhang near the entrance, we had our spot for the rest of the day. We would end up seeing all kinds of weather over the course of the afternoon, but we stayed dry. 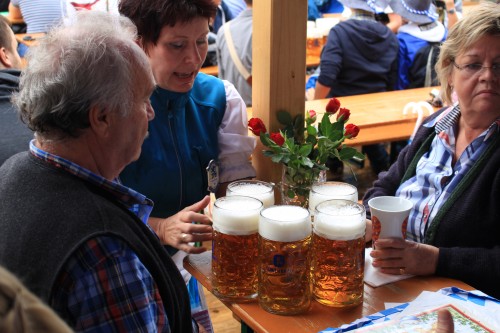 At this point, we had some time to kill, but knowing that beer & good food would eventually be coming made it all easier. We chatted and had some water that would be needed later, while we waited for the mayor and the clock to get their asses together to start Oktoberfest. Just before noon, I took a restroom break. Now this is not normally something that I would be writing about, but I have to as a warning. I was at Oktoberfest before the festival even started, before anyone even started consuming mass quantities of beer & meat, and the odors emanating from those bathrooms were some of the worst I had ever smelled in my life. I can only imagine what they are like after the festival has been going for a while. You have been warned.

The tables at Oktoberfest are made for sharing. Given that there were only 3 of us, we were approached by others who wanted some space, which we had no problems with. Meeting random people from all over the world is one of the greatest parts of Oktoberfest, and it made for an interesting day. We were quickly joined by an Irish guy and a group from Poland. It’s truly an international event. I’m American, my friend is English, and his wife is Australian, so the running joke of the day was “an American, an Englishman, and an Australian walk into a bar and…”

Oktoberfest is like the world’s greatest college football tailgate. You have great food on the grill, beer, marching bands and cleavage. All of this makes for a fantastic experience. 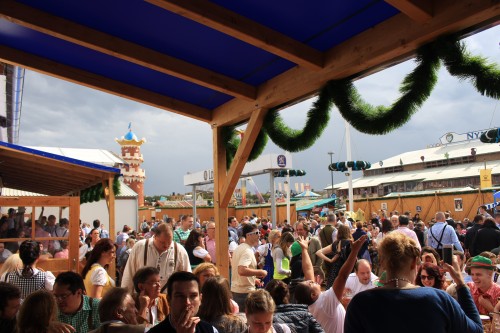 Everyone was laughing and singing. I didn’t know any of the German songs, but readily joined in when everyone started singing “Seven Nation Army”. We nearly reached that number at our table alone.

To be honest, the day as a whole was a blur. Lots of meat, lots of beer, lots of good times. My friend and I split a huge tray of various meats. It was about 45 euros and came with several bratwursts, half a rotisserie chicken, two different types of roasted pork (complete with wonderful crispy pigskin), and two types of dumplings. There was also a stray tomato and piece of lettuce, which we ignored. We did not travel to Munich to eat vegetables. 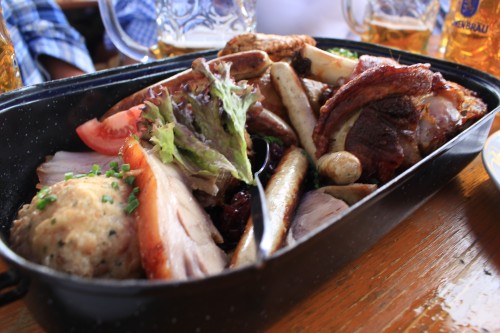 As the sun began to set, we wandered around the festival grounds for an hour or so. My friends rode a couple of rides, but this seemed like a bad idea to me after all the beer and food, so I stayed on the ground with zero regrets. 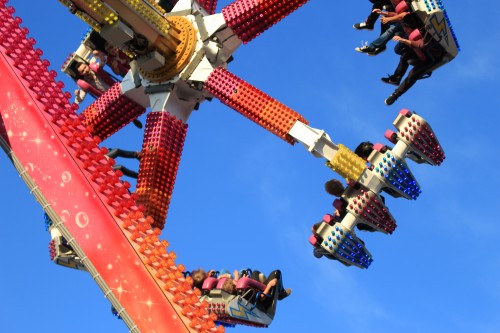 In addition to being a huge beer fest, Oktoberfest also has a wide array of carnival rides, games, and food stalls. For some people, it can be a bit much. 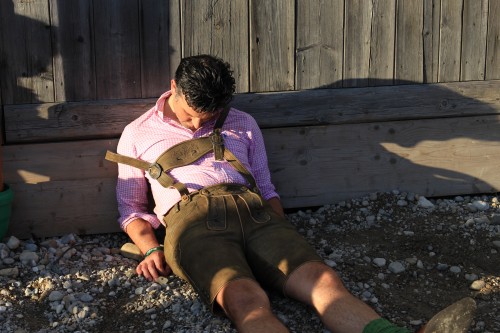 We walked around the city for a while, had a snack, then said our goodbyes. I got on my train back to Garmish-Partenkirchen and quickly went to bed. Well, maybe not… (to be continued)