). The bus portion of the tour itself was run by AwesomeNZ. We left Queenstown early in the morning around 7am. There was some confusion at first because there were two buses heading to Milford Sound, both of which had separate lists. It wasn’t particularly well organized given the two lists, and it was a busy morning given that it was over the summer holiday period. The 2nd bus finally arrived, and I managed to snag a window seat. There also wasn’t a row in front of it thanks to it being at the rear exit. 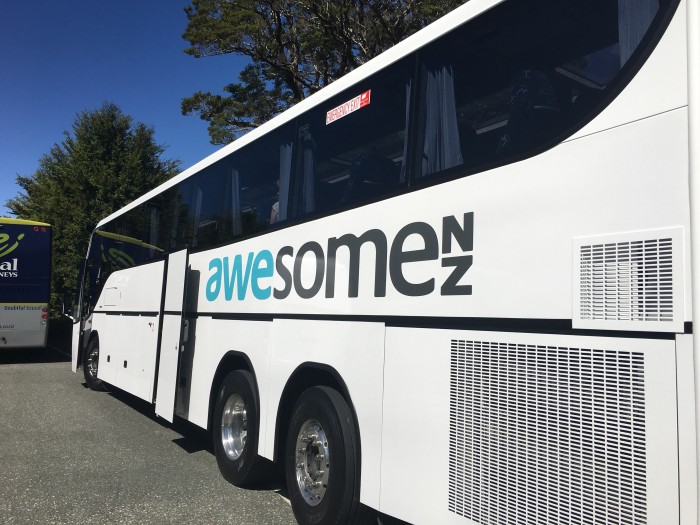 The tour buses to Milford Sound have glass roofs, which is both a blessing and a curse. The glass comes in handy when you’re passing through narrow steep valleys, and you can see trees and mountains above you, but the rest of the time you are in a greenhouse. The bus can get quite hot & sunny, so be sure to wear sunscreen, especially with the ozone layer being so thin in New Zealand. 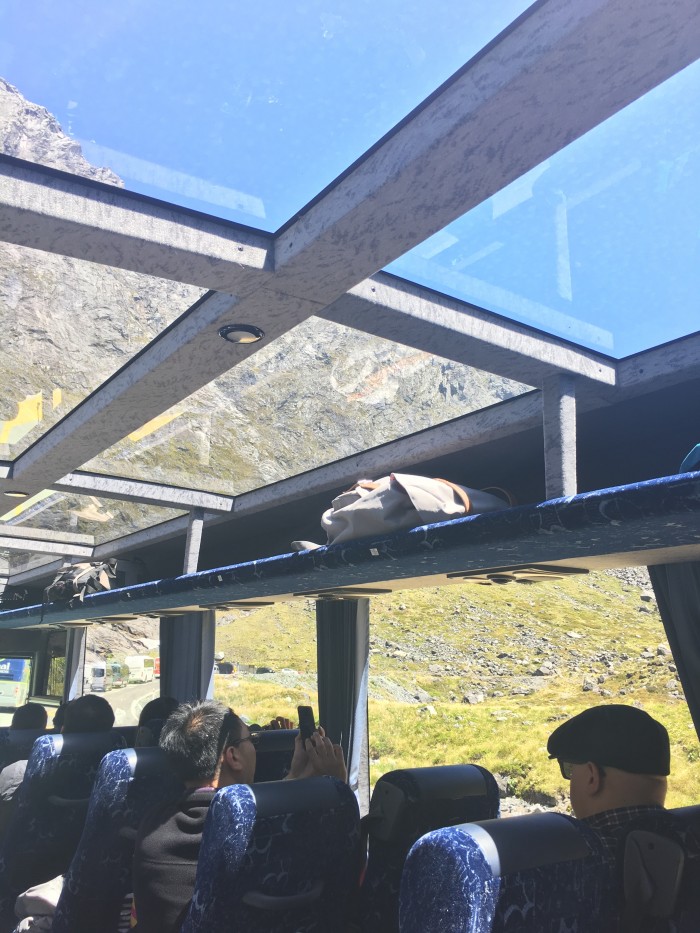 As more people joined the bus, the driver asked some solo travelers to sit together so couples could also sit together. I didn’t think this was fair to those people who had window seats already. Perhaps they should do assigned seats on these trips, especially since on the way back, 90% of people took their previous seats while the other 10% chose to create chaos. I was glad I wasn’t asked to move, as I sometimes get car sick, and it’s helpful to have a window to look out of. Otherwise, I would have had a negative result with the amazing sausage roll I’d bought from Fergbaker that morning. I did end up with someone sitting next to me after a stop at a Queenstown hotel. The guy proceeded to slowly chew on a fruit bar for over an hour. Serves me right for not wanting to have to move.

Finally, after a bit of a delay, we were on our way toward our day trip to Milford Sound. Even though the journey is on regular buses that anyone can take, there is narration for most of the way, so those who aren’t on the day trip from Queenstown get a bonus. This narration is actually the case on many of the buses around the South Island, which I would later find out on my rides from Queenstown to Franz Josef and Franz Josef to Nelson.

Our driver told us about the geology and history of the region, also pointing out the area where a railway formerly ran through the South Island. Just south of Lake Wakatipu, we passed by Garston, the most inland point in New Zealand. It’s not particularly far inland, showing just how tied to the sea the country is. The area is surprisingly flat though. I had expected more mountains like the area around Queenstown. 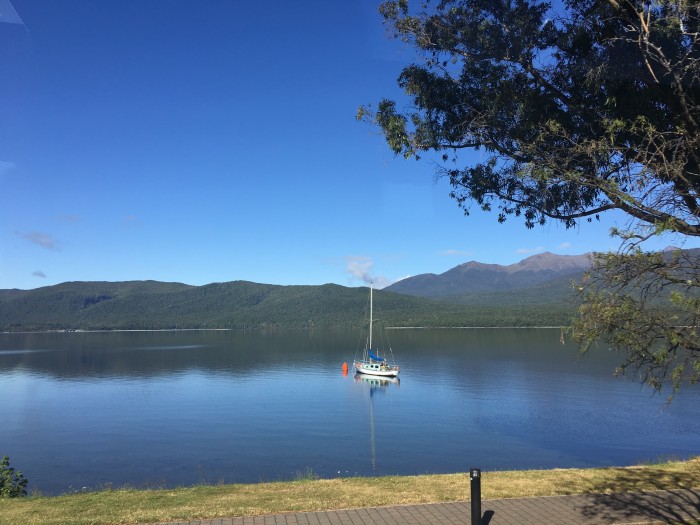 Along the way to Milford Sound, we stopped several times for short walks. Our longest stop was about 30 minutes in Te Anau. There was a restaurant & store called the Hollyford Cafe, where I had an amazing cheese scone. 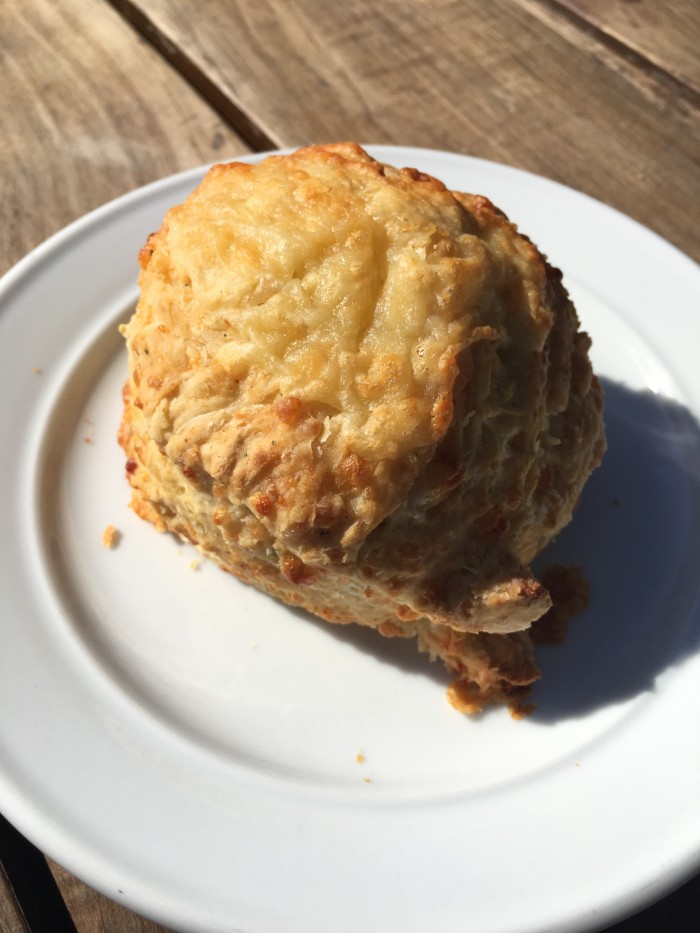 Driving north from Te Anau, the scenery began to change. As you approach the coast, it gets wetter & wetter, with more vegetation as a result. It was a rare cloudless day in this area of temperate rainforests.

Soon we were in Fjordland National Park, part of the Te Wahipounamu UNESCO World Heritage Site. As we drove through the beginning of the valley that leads toward Milford Sound, I couldn’t help be reminded of the Yosemite Valley in California. We stopped in the middle of the valley to take photos & walk a bit. 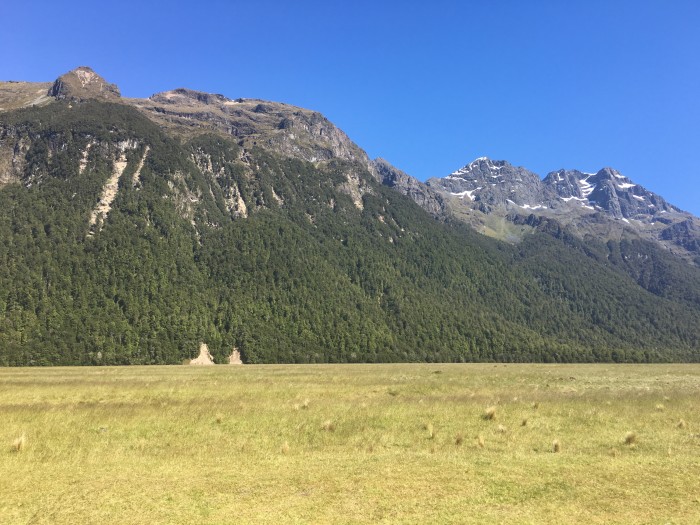 After the walk, we came to a screeching halt after a woman ran up to the front. The woman thought her son had been left behind. It was the dumbass fruit bar chewer, who had just gone to the bathroom. I said that was the case about five times, but nobody listened to me, so I just gave up and let them look around outside until he came back out, even though there was nothing around that could have hidden him from view for at least a mile.

A short time later, we stopped at another beautiful spot, the Mirror Lakes. The water was so still that the mountains were reflected almost perfectly, so good job, whoever named them. 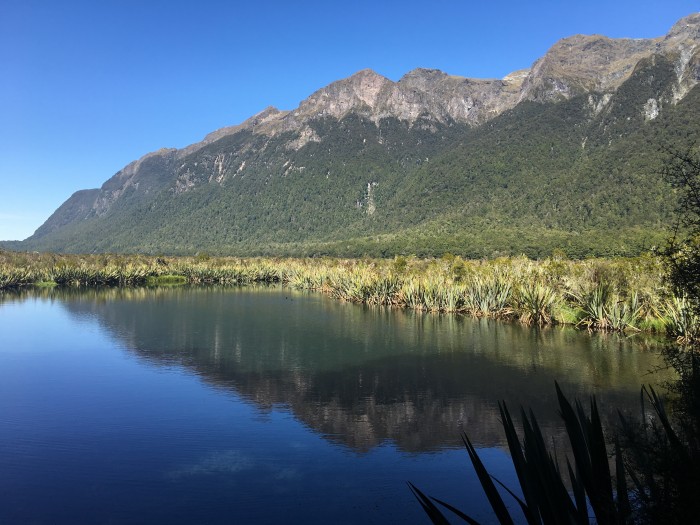 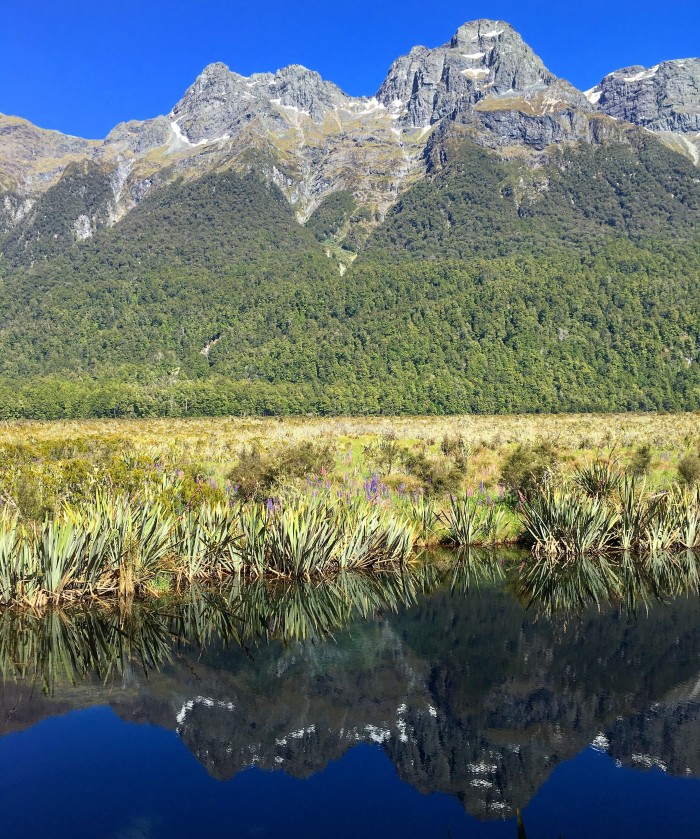 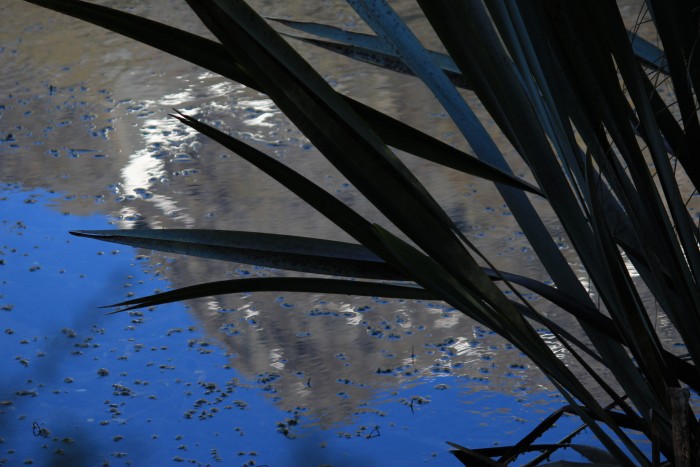 One drawback of being on a large tour bus like this is that you are part of a large group that is arriving all at the same time, and you only have a few minutes at the stop. As a result, there’s not a lot of time to see everything. This is compounded by people who monopolize the views by standing in a busy, but beautiful spot for lots of selfies. Quick group photos & selfies are of course fine, but several of the people on my bus never even actually looked at the beautiful views, only instead staring at their screens with their backs to them while forcing everyone else to wait. Sure, they’ll get lots of likes on Facebook & Instagram, but when anyone asks them what the place was like, they won’t really have any idea.

If you’re like me, you try to figure out which side of a tour bus will have the best views. In this case, there are great views from both sides of the bus at different times, so if you’re doing the the whole day trip to Milford Sound from Queenstown, just stay on the same side of the bus the entire day, and you’ll eventually see everything. 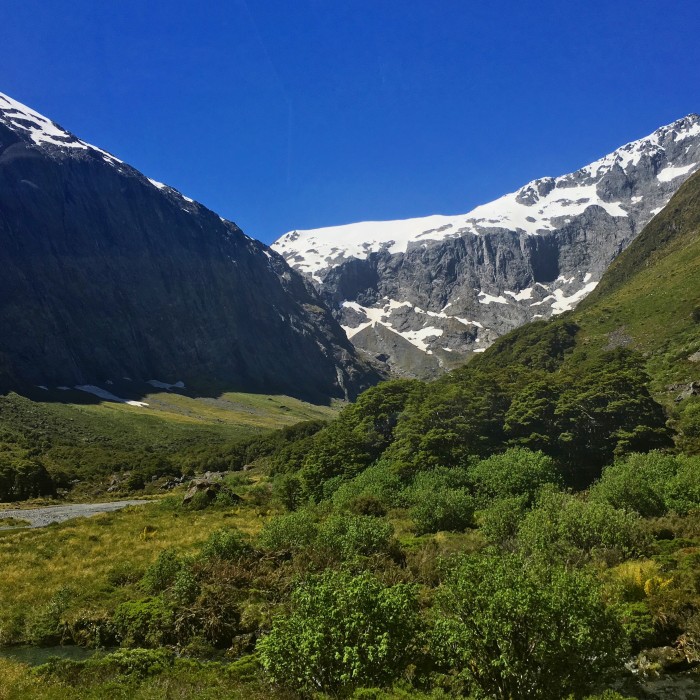 Our driver continued his narration on our approach to Milford Sound. At one point I had my first difficulty understanding the Kiwi accent. I couldn’t figure out why he kept talking about the “bigotry that grows”, but he was really talking about a “bigger tree that grows”.

After making our way through the winding forest roads & valleys, it was time to make the last part of the drive into Milford Sound. Milford Sound is of course on the coast, but there is a large mountain range that forms the spine of the South Island. As such, the coast can only be accessed by road via a tunnel that cuts through the mountains toward another valley. The Homer Tunnel is a 1.27 km one lane tunnel, and the views at both ends of it are stunning. 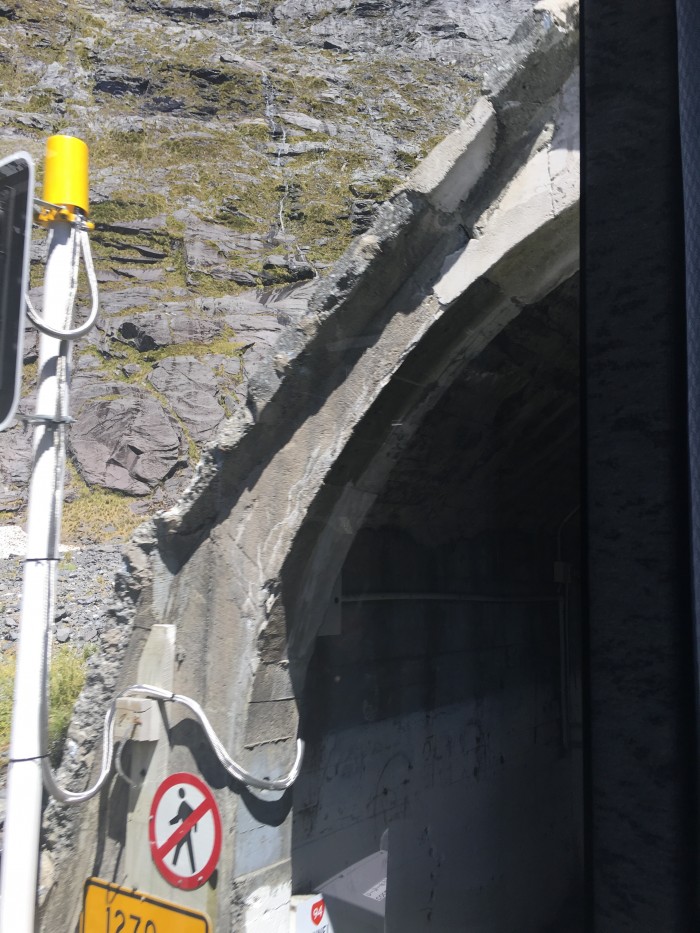 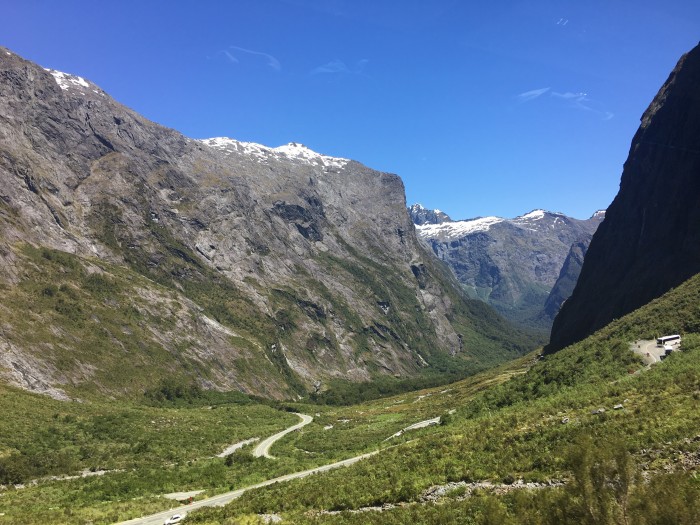 We descended the rest of the way through the valley, and we were finally at Milford Sound, nearly six hours after we had left Queenstown.

From here, we would now be taking a boat cruise around the sound. We were on the Spirit of Milford, a boat run by Southern Discoveries. The cruise takes about 2.5 hours to travel the length of the sound and back. 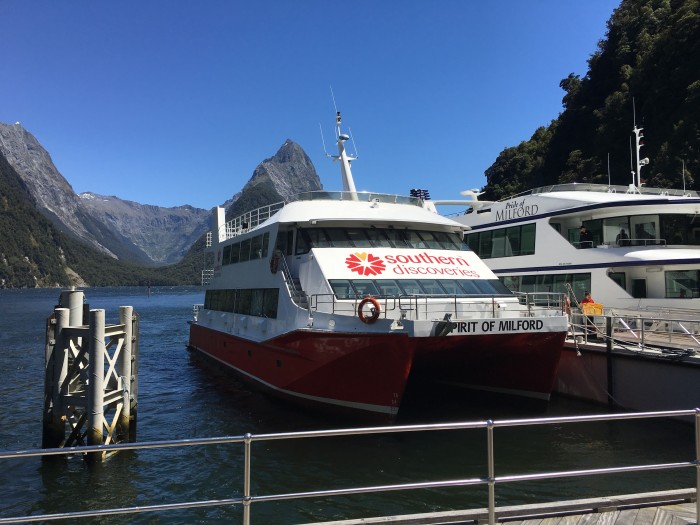 I had planned which day I was going to do this day trip to Milford Sound on pretty far in advance, thanks to only having four nights in Queenstown. As such, I knew was going to be taking my chances with the weather. Milford Sound has notoriously bad weather, with the mountains & sound being ensconced in clouds & fog for most of the year. It is one of the rainiest places in the world. Naturally, we arrived to find cloudless skies. 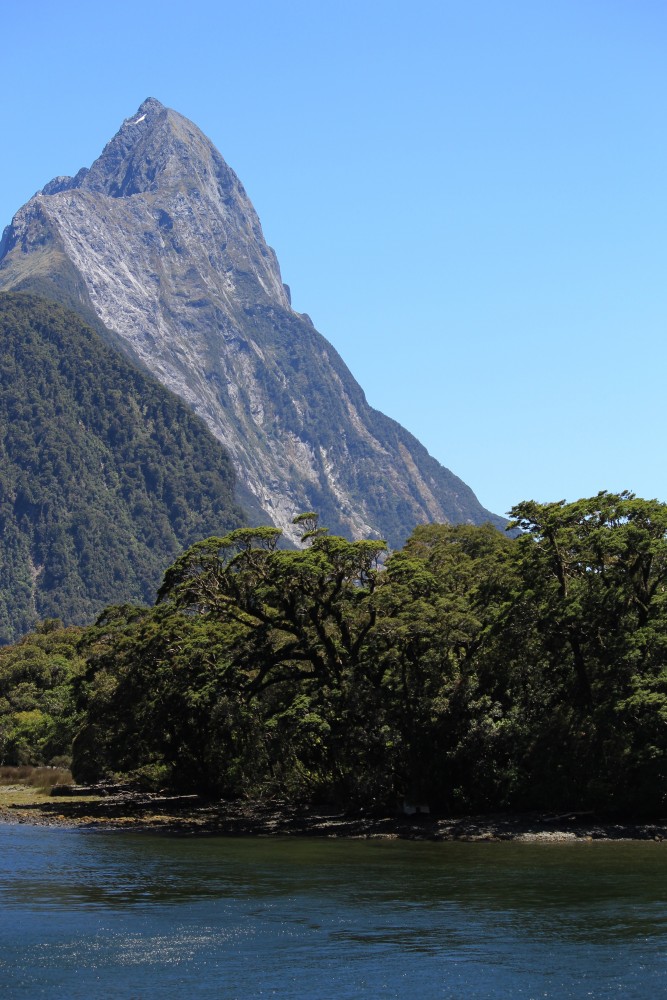 There are only a few clear days in Milford Sound each year, and I’d happened to arrive during a miraculous streak of several in a row. This streak would continue throughout my trip to the South Island, as I got to see much of it under blue skies. 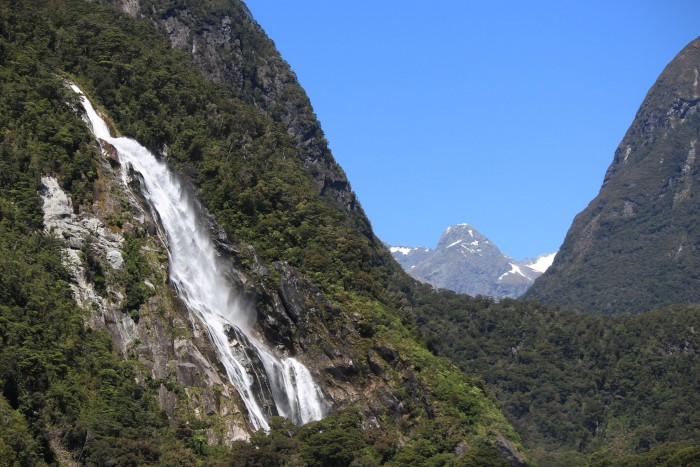 With blue skies comes bright sun and heat, of course. It was hot out on the sound, but there was a nice, cooling mist as we passed under waterfalls. 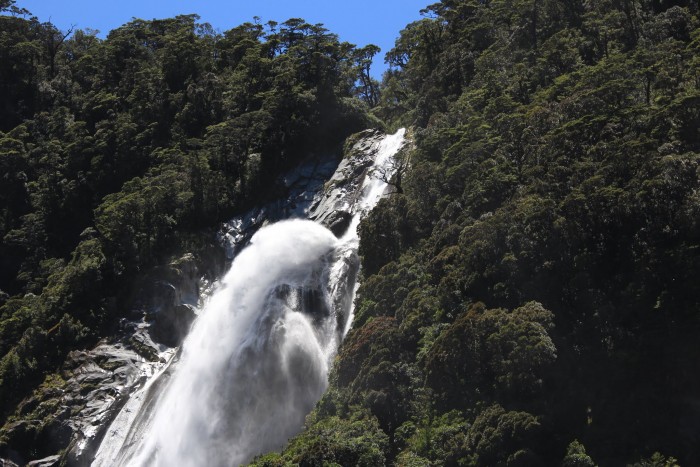 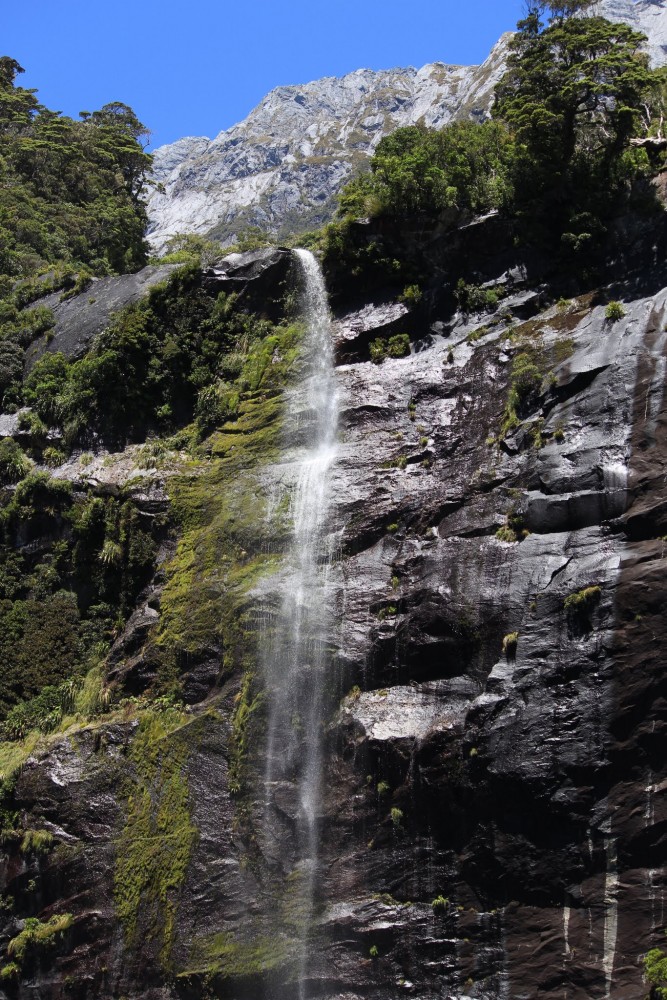 Some people were practically wearing parkas. I was warm in a short-sleeved t-shirt. There was a lot of wind at the front of the upper deck of the boat, as the breeze passes up the slope of the boat, but a few steps back from the front it was fine. At the front of the boat like Leonardo DiCaprio & Kate Winslet, all I could think of was the bad rendition of “My Heart Will Go On” that I had heard outside the cookie karaoke place in Queenstown a couple of days prior. As I struggled with the wind, I was also reminded of this video of Al Roker in a hurricane. 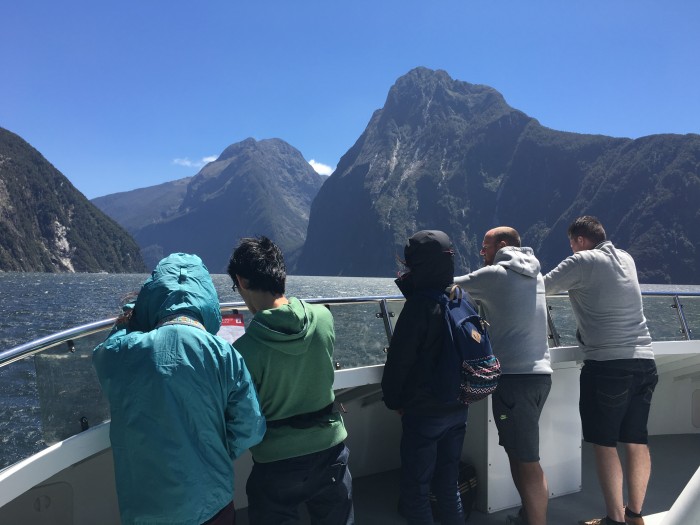 There is a lunch buffet on the Milford Sound cruise, but honestly I have no idea why anyone would want to do this. Whether or not the food was good or bad, if you only have a couple of hours in one of the most beautiful places on Earth, why would you spend it inside and not enjoying the view? Thanks to the buffet, the top deck was almost empty for the first half hour of the cruise around Milford Sound. It was great for those of us who wanted to move around and take photos, but a lot of people missed out on some amazing views.

Milford Sound wasn’t discovered by European explorers until 1812, thanks to a combination of its remoteness, narrow entrance, and poor weather conditions. Prior to that, it was a Maori fishing ground. Nowadays, Milford Sound is inhabited by an array of wildlife, including birds & seals. 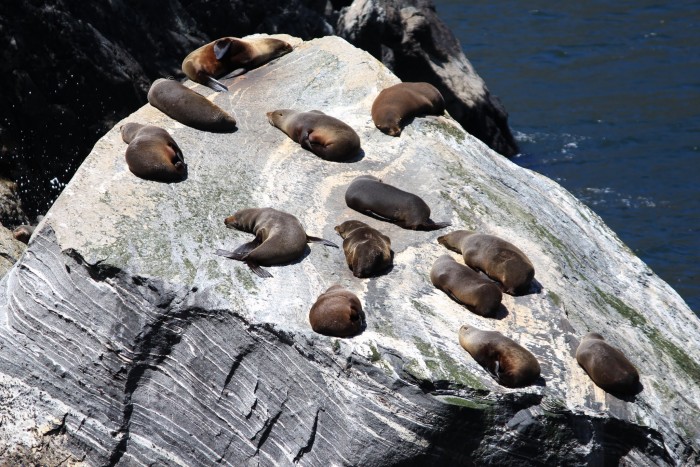 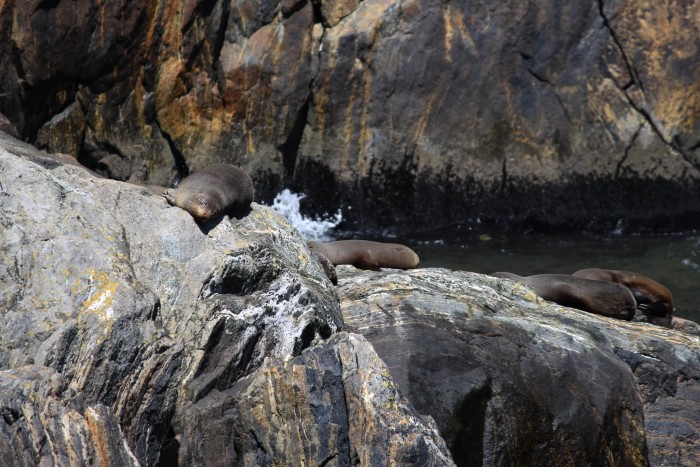 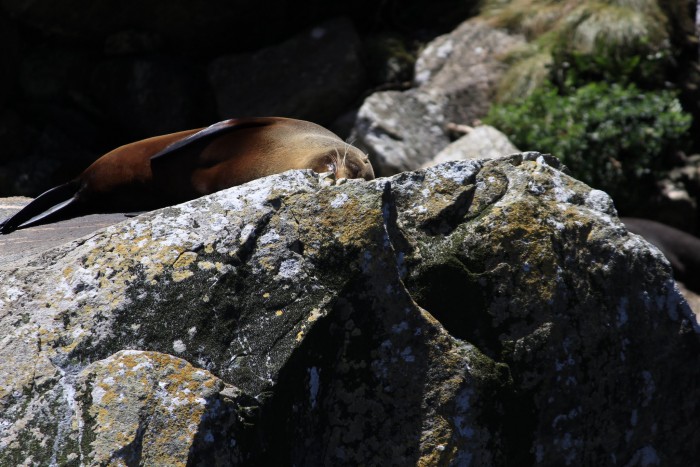 If weather conditions allow, the Milford Sound cruises go all the way out to the mouth of the sound (which is technically a fjord). As you turn back, it’s impressive to see just how hidden the fjord is, with towering mountains reaching over a kilometer into the air straight from the water. 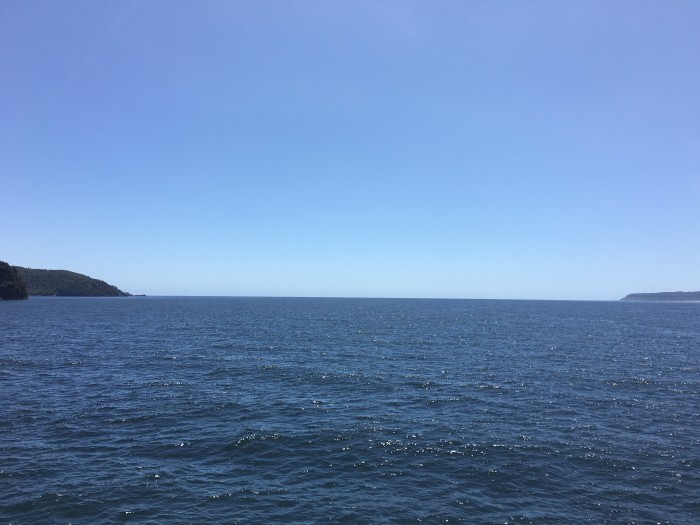 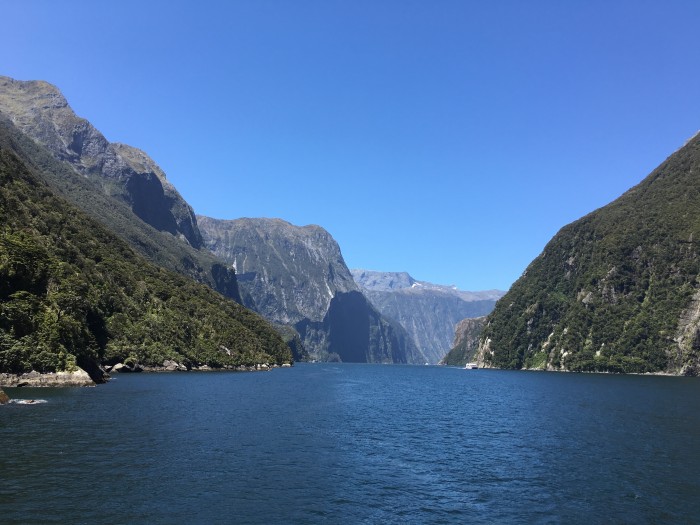 On the way back, the boat passed under one more refreshing waterfall. Or at least it was refreshing on a hot day, I can’t imagine it would be particularly pleasant on a cold, winter day.

As we returned to port, we could see the stunning Mitre Peak, which rises 1,690m (just over a mile) above Milford Sound. It’s one of the most photographed places in New Zealand, for obvious reasons. 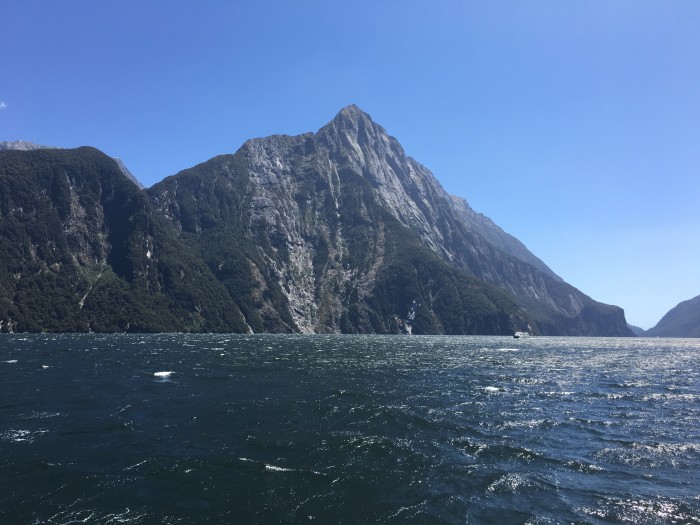 The peaks above Milford Sound are dotted with remnants of the glaciers that created the geography here, making it one of the most beautiful places in the world. Photos & videos can’t quite manage to convey just how dramatic the scenery is. The walls of the mountains and cliffs are so steep that my neck was a bit sore from craning my head up all day long. 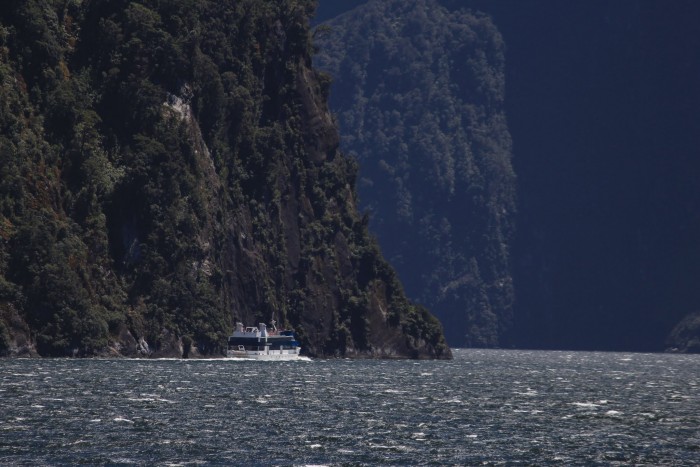 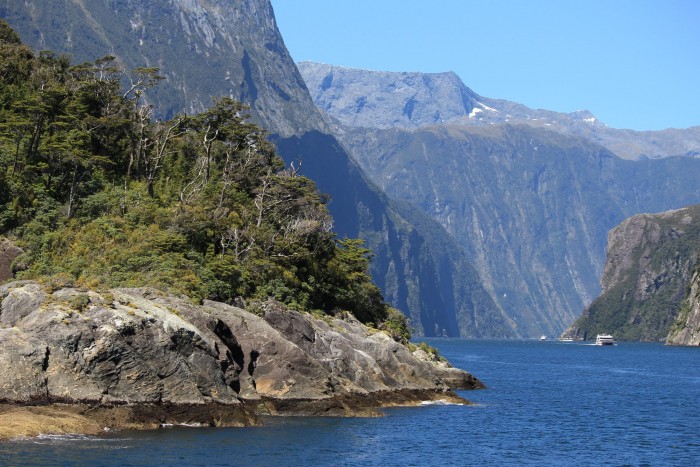 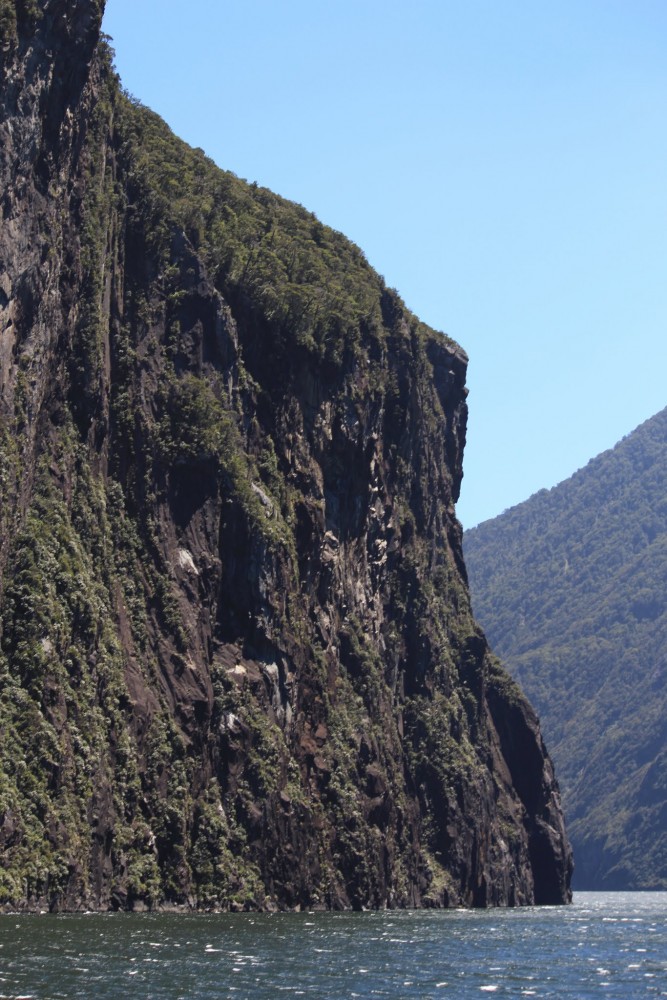 After the cruise, it was time to head back to the bus. The drive back is quicker since there aren’t as many stops. I got back to Queenstown around 7:30pm after a 12+ hour day trip to Milford Sound. It’s definitely a long day, with a lot of time on a bus in order to be out on the water for just 2.5 hours, but for me, it was worth it to get to see one of the most gorgeous places I have ever visted. 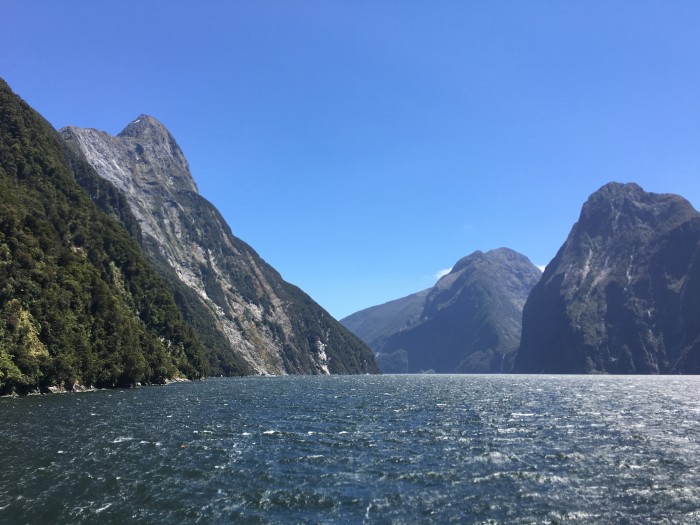 Thanks to the tour schedules & drive times from Queenstown, which is how the majority of visitors arrive, Milford Sound sees a surge of activity in the middle of the day. While it didn’t seem overly crowded out on the water, I imagine that it must be a much more peaceful place if you can visit early in the morning or late in the day for an extended visit. It was amazing to see Milford Sound on a clear day, but it would also be interesting to see it in the mist as well. I’ll just have to go back someday.