When you think of beer in Dublin, there’s only one name that comes to mind: Guinness. And yes, the city’s drinking culture & brewing tradition does revolve largely around that velvety stout. One unfortunate side effect of having such a large brewery in Dublin is that there’s more of a macro “craft” foothold than in other cities. Some Dublin pubs will feature craft-marketed beers from large breweries such Guinness & Heineken, and your average consumer won’t have any idea since the true brewer is well-hidden. However, look a bit deeper and you’ll find that there’s some legitimately good craft beer in Dublin. You just have to know where to find it. Here is where to get the best craft beer in Dublin, including its best breweries, taprooms, and bottle shops.

Underneath Brogan’s in Temple Bar, you’ll find UnderDog, a basement craft beer bar with one of the best beer selections in Dublin. UnderDog has 18 taps plus cask, as well as some bottles & cans. There’s plenty from Irish breweries, along with the UK & the rest of Europe. In addition to regional brewing stalwarts, you’ll also find selections from the newest up-and-coming microbreweries. 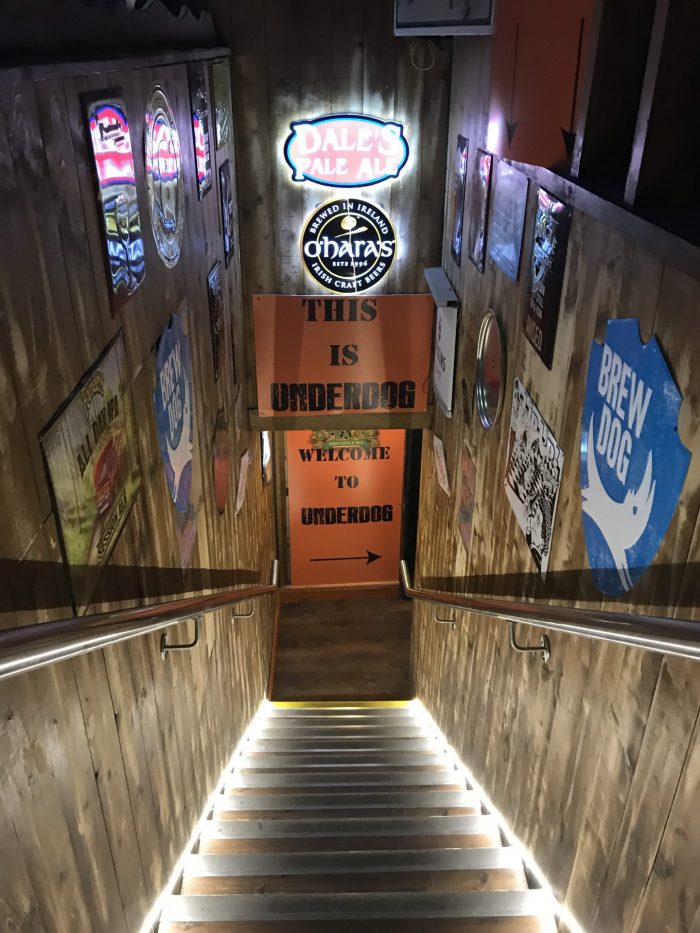 The bartenders were the friendliest & most knowledgable that I encountered in Dublin. That’s no slight on anyone else; the staff at UnderDog were just that great. Sometimes a bar like this can be pretentious, but there was none of that here.

My basement rule of bars (basement + bar = awesome) holds true, as UnderDog is the place to go for discerning craft beer drinkers as well as anyone else who’d like to broaden their horizons.

Cassidy’s is a beer bar that has a different atmosphere than most of the other pubs in the Temple Bar area. You won’t find nearly as many tourists in this eclectic hole-in-the-wall. Given how dark it is inside, you’ll have difficulty finding anyone. But that’s part of the charm. 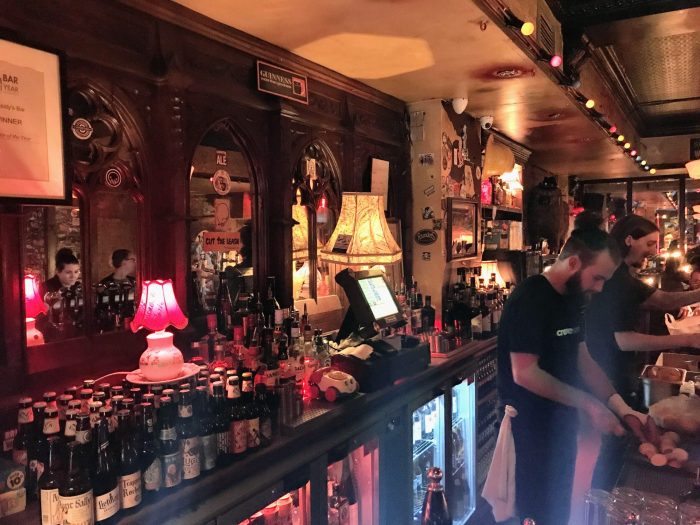 Cassidy’s strikes that perfect balance between liveliness & chill depending on the day of the week, with friendly gathering areas, games, and great rock music.

There’s a nice tap selection, with 11 rotating taps, plus another 17 or so permanent fixtures. Oh, and free crisps.

P Mac’s is a sister bar of Cassidy’s, with a similarly large selection of craft beer. There are 30 taps available, plus another 50 or so cans & bottles. It’s a big place, but some hidden little rooms provide a more intimate experience if that’s what you’re after. Again, there’s great rock & indie music playing, plus arcade & board games. 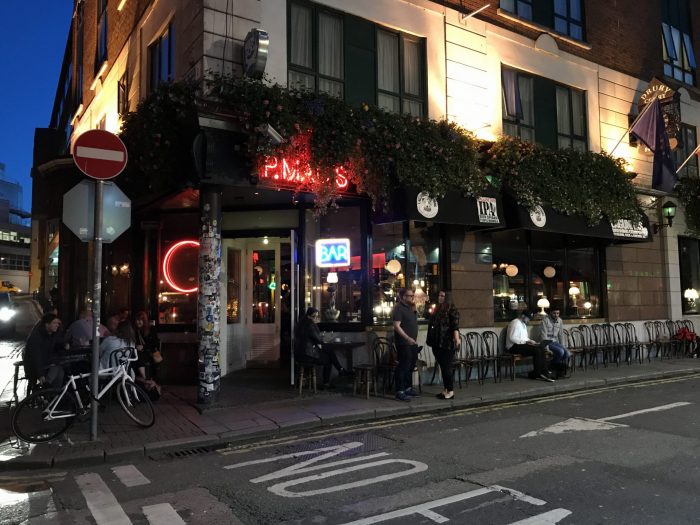 L. Mulligan Grocer is a little bit outside of the Dublin city centre, northwest of the old Jameson Distillery. However, it’s worth the journey, as it has one of the largest selections of craft beer in Dublin.

Scottish craft beer behemoth BrewDog opened their first Irish bar in Dublin’s docklands at the end of Central Quay. As you might expect given its location, it’s popular with the tech & expat crowd.

Camden Exchange features craft beer, cocktails, and street food. It has a bit more of a hipster feel than other Dublin pubs, but it’s a cool place. They have about a dozen craft taps plus a handful of bottles and cans, then other macro beers as well. 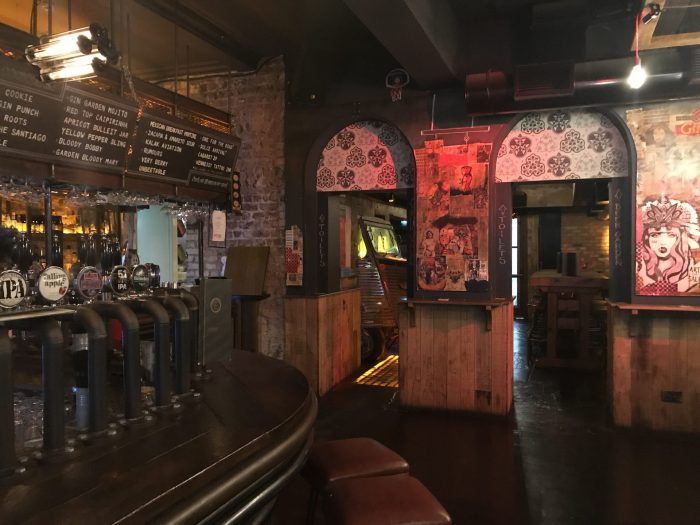 Their menu is somewhat different from typical pub food, which is a nice change. The food is tapas style, so the smaller portions could make it a bit pricier if you go in there hungry.

The Swan Bar might not be a craft beer bar, per se, but it’s something special. There are 16 remaining Victorian pubs in Dublin. Of those 16 pubs, The Swan Bar has the best craft beer selection, as limited as it may be. But it does provide a special drinking experience, so if you’re a craft beer drinker who wants to check one of the Victorian pubs out, this is the one to go to. It’s also near the Little Museum of Dublin, an excellent local history museum. 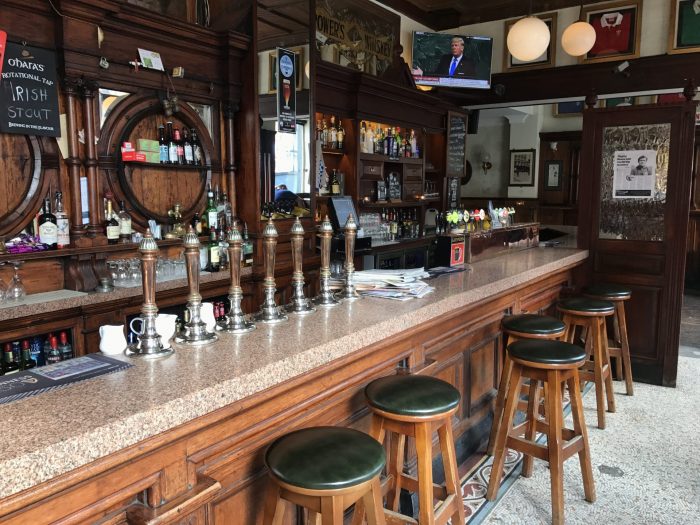 While The Brazen Head also might not be considered a craft beer bar, its uniqueness & history merit a stop from any drinker.

The Brazen Head is debatably the oldest pub in Ireland (a few places make that claim), but whatever the case, it’s certainly old. 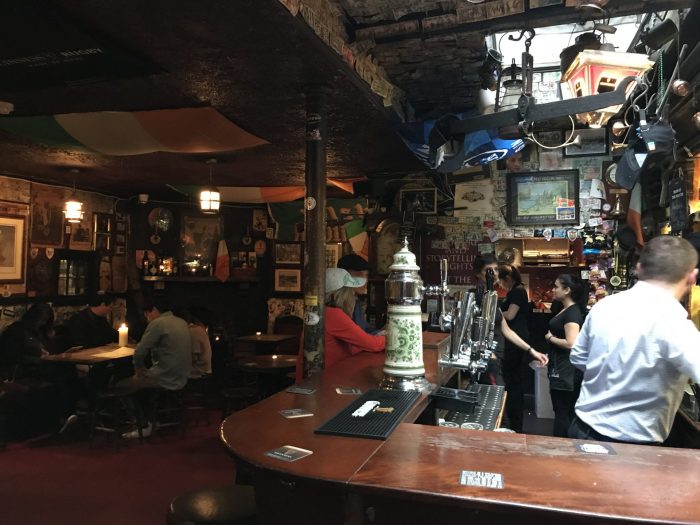 It’s got a courtyard patio, plus lots of little rooms & bars scattered about. They have a house craft beer called Brazen Red (brewed by Rye River Brewing Company, just outside of Dublin), which is good enough to merit a place on this list.

The best craft breweries in Dublin

Considering the size of the city, there aren’t too many craft beer breweries in Dublin at the moment, but there are a few spots to check out.

Urban Brewing is located in the same building that also houses EPIC: The Irish Emigration Museum. They offer tours & tastings, or you can just drink at their onsite bar & restaurant. Their taps are a mix of their own straight from the tank & guest, plus they have a large bible of bottle selections.

Emma Devlin and Cathal O’Donoghue founded Rascals Brewing in 2014. It’s a bit of a journey out past Kilmainham Gaol, but Rascals Brewing Company is one of the most innovative breweries in Dublin. Going beyond the standard styles found at every other brewery, Rascals has unique beers such as Chardonnay Saisons, Mint Chocolate Stouts, & Strawberry Vanilla Milkshake IPAs. However, this use of different flavours doesn’t mean they don’t still pay their respects to the styles at the core of these beers. Their Rascals HQ is home to their brewery, brewpub, & pizza restaurant.

Across the Liffey is J.W. Sweetman, a microbrewery named after one of the biggest 19th century brewers. They have a West Coast pale ale, an Irish red ale, a stout, a porter, an American blonde ale, and a hefeweizen, plus seasonal rotations. The bar shows live sport on the televisions, plus they also have live music every day. 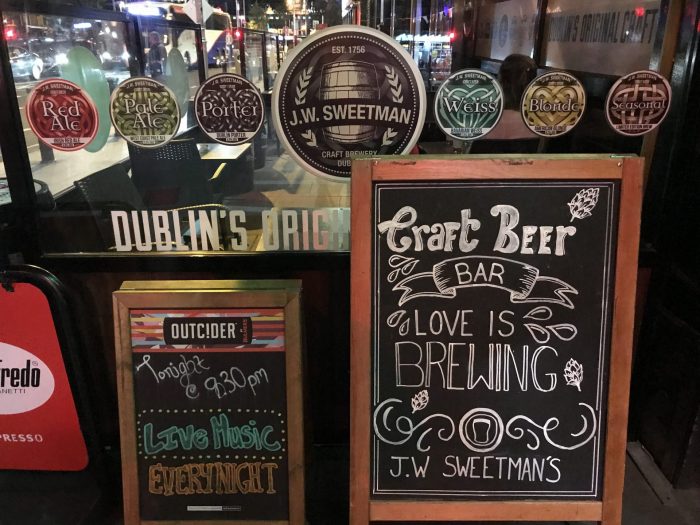 The 5 Lamps Brewery is located inside The Camden, a multipurpose nightlife venue. Camden Street is packed with popular bars. 5 Lamps offer tours, including tastes of their flagship lager, pale ale, red ale, and stout.

Porterhouse Brewing Company is located near Glasnevin Cemetery, but at the moment it doesn’t appear to have any public tours. Go to one of their taprooms listed below instead.

The best brewery taprooms in Dublin

There are a couple of Irish craft breweries, Galway Bay & Porterhouse, that have multiple locations in Dublin.

Of all of the Galway Bay brewpubs I visited in Dublin, The Beer Market was my favorite. It had the best vibe, providing good banter with the other patrons & staff. 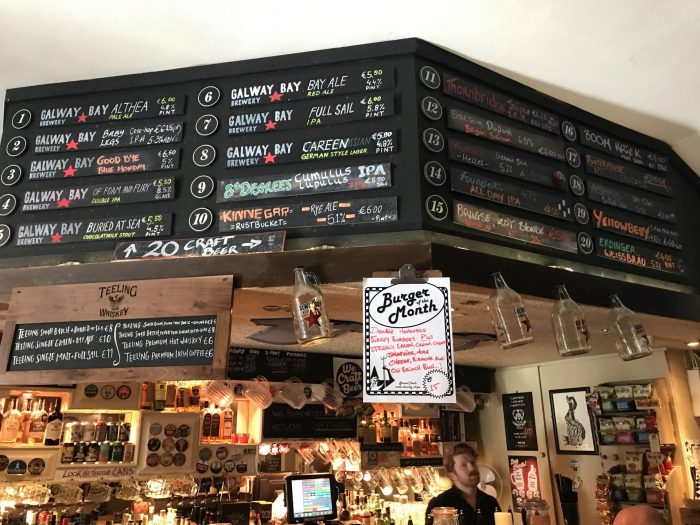 Being a bit cozier than their other brewpubs probably helped, but it also felt like more of a neighborhood pub even though it was right in the Dublin city centre near Christ Church Cathedral. The Beer Market has 20 taps, with a large selection from Galway Bay plus some guests, as well as a huge selection of Irish whiskies.

The Black Sheep is a Galway Bay pub with 30 taps, plus 100 or so bottles. Many of the taps are from Galway Bay, but they also have some guests as well, including imports. They also have lots of local Teeling whiskey available, including pairings. It’s got a somewhat traditional pub feel, with plenty of space as well as board games. 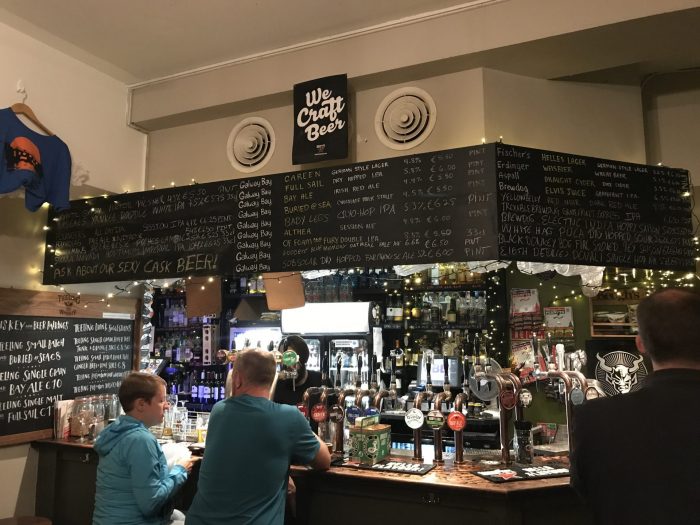 The Brew Dock, Against the Grain, & The Gasworks are also Galway Bay pubs. Their beer & food selections are similar to the other bars. If you’re going to have several pubs in one city, it would be nice if they were differentiated a bit more, but overall they’re pleasant places for a pint & some craic.

There are a couple of Porterhouse brewpubs in the Dublin city centre. Their original Temple Bar location has been in operation since 1996. As is the case with most Temple Bar pubs, the’ve got live music every night of the week. It’s a huge, multilevel place, but the layout & wood decor still keeps things feeling like a more intimate pub.

Porterhouse Central on Nassau Street is the 2nd Porterhouse location in Dublin. Thanks to being off Grafton Street just a little bit further from the heart of the nightlife action, it was much more chill than other pubs were on the same night I visited. 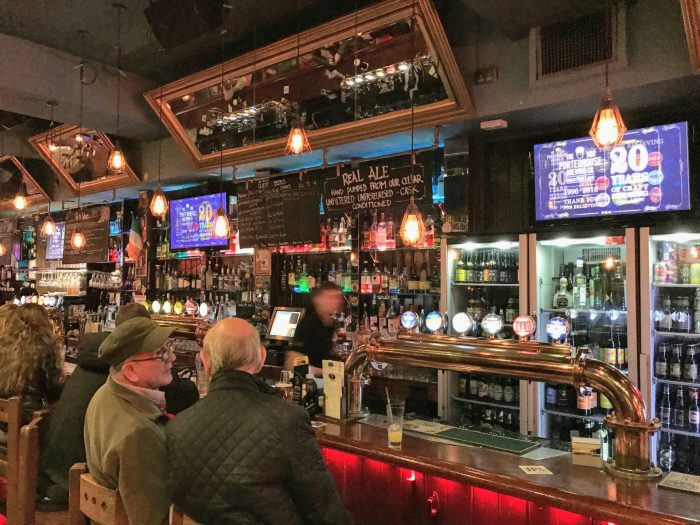 I had the Celebration Stout, which had been created for the brewery’s 20th anniversary. They had a large selection beyond that, with 16 taps of their own beers, plus another 6 or 7 guest taps. They also had about 100 bottles & cans from around the world.

The music invites fun. During my visit, it was mostly 70s, 80s & 90s hits, with the highlight being the entire bar singing together to Billy Joel’s “Piano Man”.

The best bottle shops in Dublin

Just down the street from L. Mulligan Grocer is DrinkStore, which has a massive selection of craft beer & other drinks. They also have a website for online purchases.

Molloys Liquor Store in the Liberties is probably the best bottle and can shop in the city centre. They also have a few other locations scattered around the suburbs of Dublin. 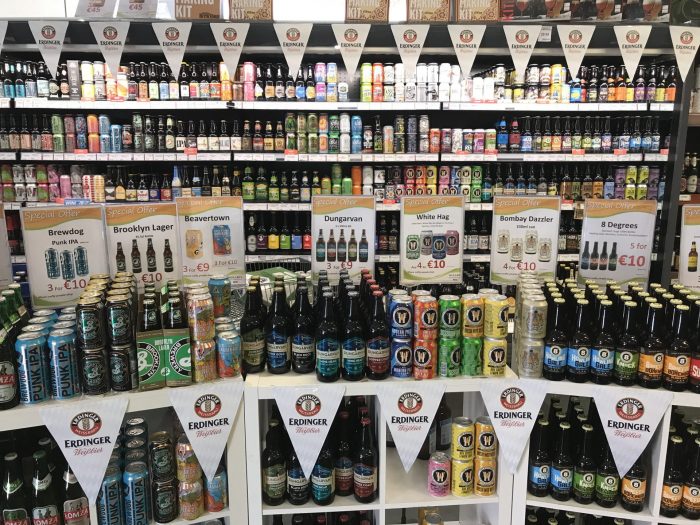 Redmonds of Ranelagh Off License

Redmonds in south Dublin has hundreds of craft beers, along with large wine & liquor selections.

As you can see, while Dublin’s craft beer scene might not be huge, there are definitely a few places worth visiting depending on what you’re looking for. Hopefully the coming years will see Dublin catch up to the number of breweries & beer bars found in other major cities.

If you’ve spotted any other great places for beer in Dublin, let me know in the comments!

If you’re looking for a place to stay in Dublin after drinking all that craft beer, check out these Dublin hotels & AirBnbs.