Kilmainham Gaol is the most famous prison in Dublin. Many well-known historical figures found themselves in its cells when it was in operation. During the Great Famine, its solitary confinement cells overflowed with prisoners. Later, not long before it closed, Kilmainham was the final holding place & execution site for many of the leaders of the 1916 Easter Rising. Today, Dublin’s Kilmainham Gaol & Museum has been refurbished & offers tours that tell the stories of this dark place’s importance in Irish history.

How to book Kilmainham Gaol tickets

Given that it’s only possible to see Kilmainham Gaol via guided tour, it’s best to book tickets as far in advance as possible. I had originally planned on going on a weekend, but very few times were available. Instead, I booked ahead for a Monday. You can also take your chances and just show up, since some Kilmainham Gaol tour tickets are available on the day. The people behind me in the entrance queue had no problems buying tickets for the next tour.

Kilmainham Gaol is located west of the Dublin city centre, past Heuston station. It’s easily accessible by public transportation, hop-on-hop-off buses, or if you’re in the mood, it’s a nice walk along the River Liffey.

The tour of Kilmainham Gaol starts in the courthouse, which was open between 1820 & 2008. There is a bit of an introduction section before the actual tour starts, so make sure you get to Kilmainham a few minutes early to check it out. 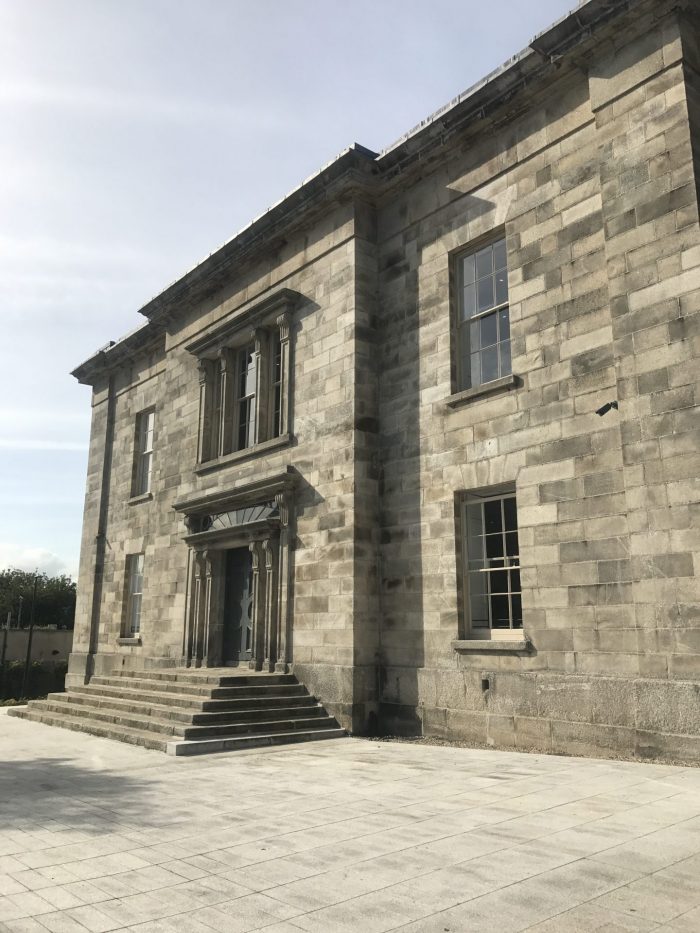 Following the intro, everyone meets in the courtroom for the tour, which proceeds to a holding cell, and then a 10 minute introductory slideshow in the chapel. 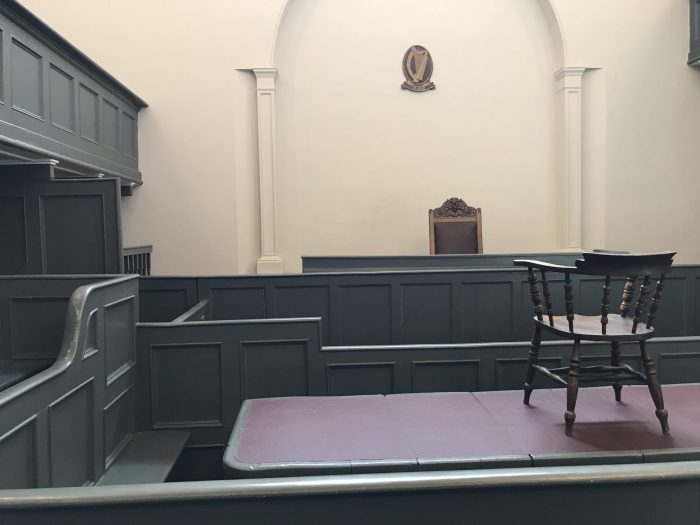 Every single tour I’ve taken in Ireland has had a tour guide who was a master storyteller, and Mick, our Kilmainham Gaol tour guide was no different. Over the course of an hour, he led us through the narrow passageways & uneven floors of Kilmainham Gaol, regaling us with stories & history. 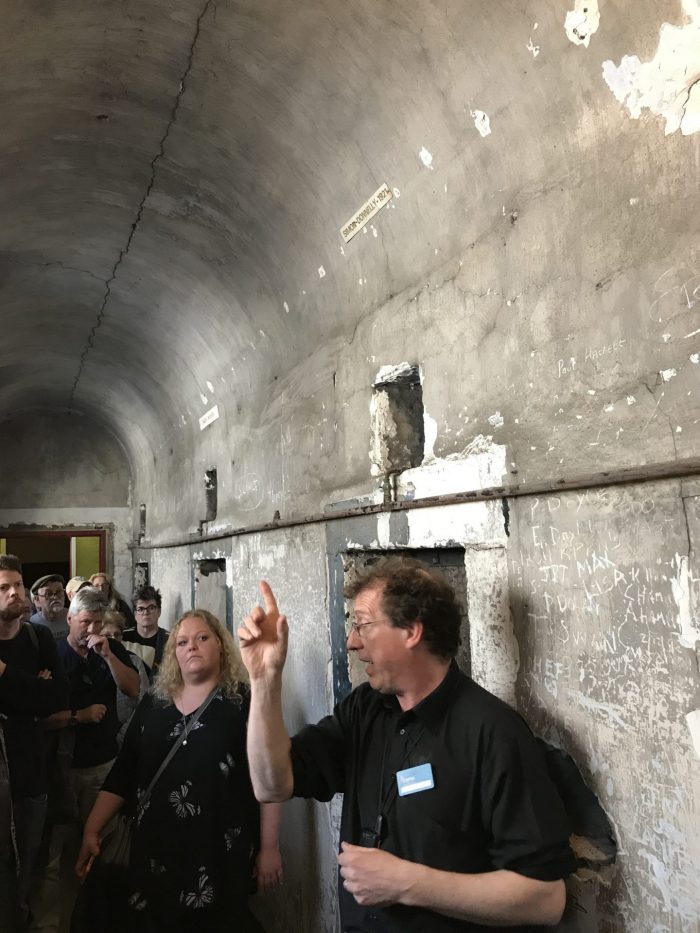 The history of Kilmainham Gaol

When Kilmainham Gaol opened in 1796, it was actually considered one of the best prisons. In that way, it’s similar to Eastern State Penitentiary in Philadelphia. However, a closer look shows just how “best” is a matter of perspective & era. 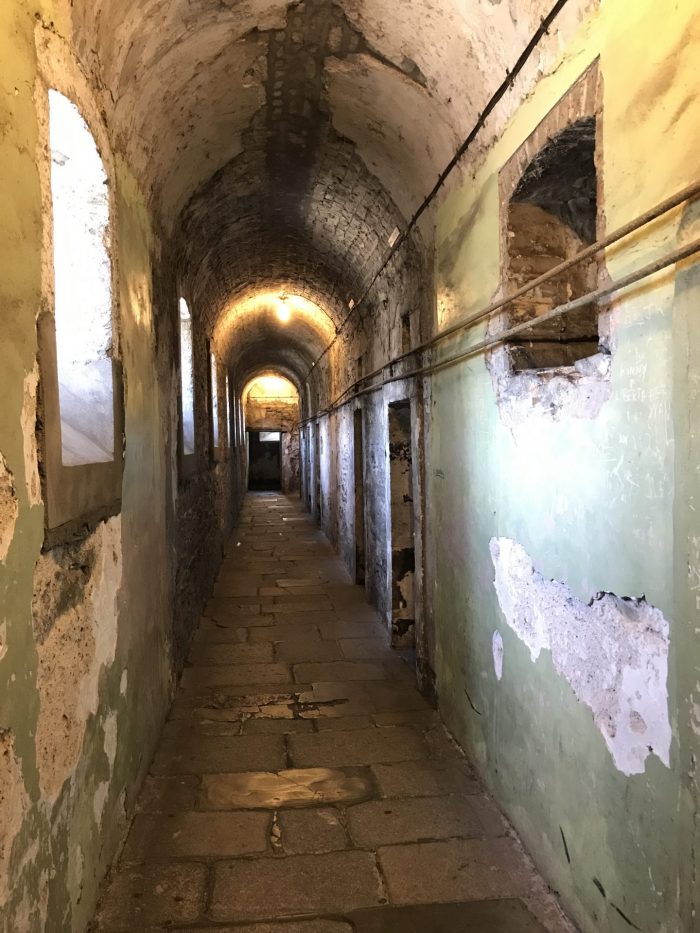 The jail’s philosophy centered around what was known as “The 3 S’s”: Solitary, supervision, and silence. When Kilmainham Gaol first opened, it was meant to subject prisoners to solitary confinement. Of course, as with most prisons, it became overcrowded, usually ending up with 3 or 4 men in a cell. During the worst crowding of the Irish Potato Famine, up to 5 to 7 people found themselves in a single cell.

Kilmainham Gaol typically held general thieves & political prisoners, but it also included women & children as young as seven. Some prisoners were held here before eventually being transported to Australia. At the worst of the Great Famine, some saw it as an option of fleeing the famine & getting food. Mick brought history into the present day by tying these stories to current social & prison situations. Just as is the case today, a disproportionate amount of those held in the jail were poor. It was a good reminder that this isn’t just the past; there are still people facing inequities today. 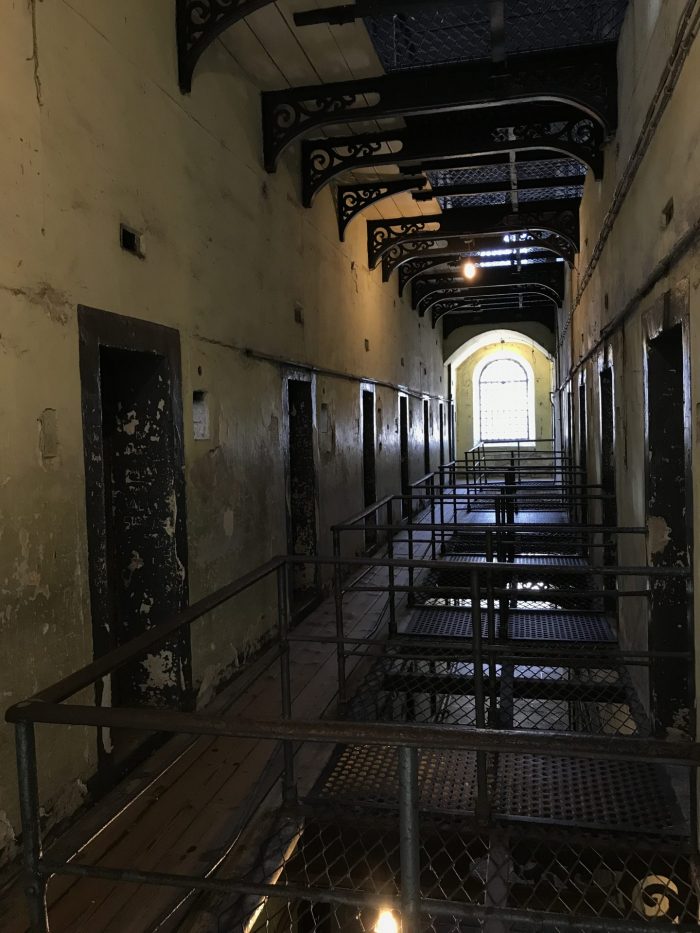 Despite it being one of the “best” prisons, conditions at Kilmainham were poor. In the mid-1800s, new gas lights were installed. This ended up giving prisoners carbon monoxide poisoning. Typhus, known as “jail fever,” was also a constant concern.

The Cell For The Condemned Prisoner

There was one cell in Kilmainham Gaol that was much nicer than others. However, this was not a coveted space. Known as “The Cell For The Condemned Prisoner,” its inhabitants would only spend one night here, the last night of their lives before having a public execution. 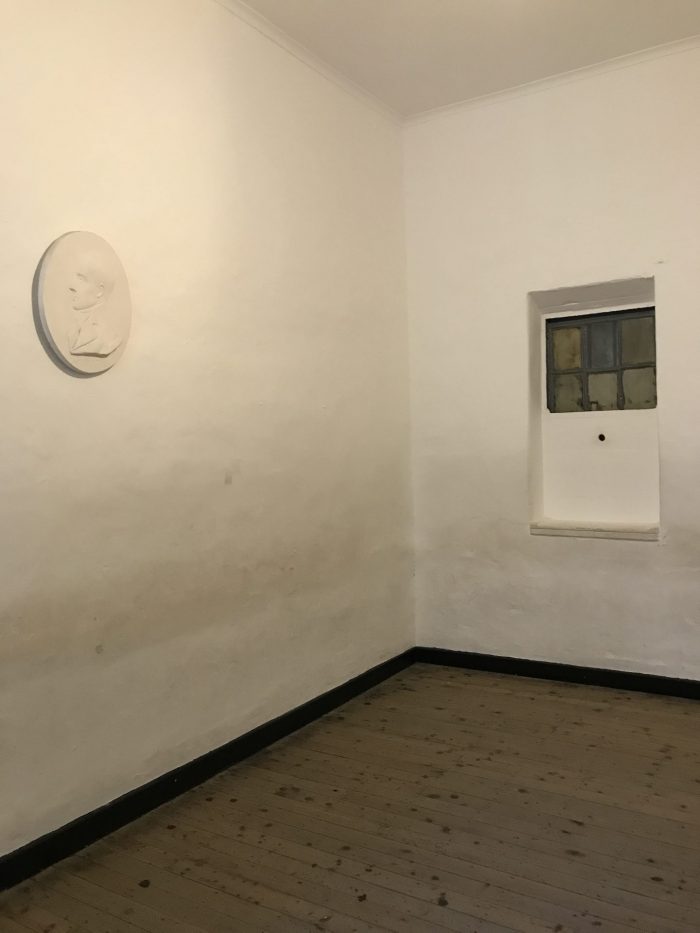 Pour yourself an Irish whiskey & immerse yourself in Irish history & passion as you listen to a reading of the “Speech From The Dock”, which has been memorized by many orators, from Irish nationalists to Abraham Lincoln.

The Main Hall of Kilmainham Gaol

The Main Hall of Kilmainham Gaol is the largest part of the complex. In 1924, the prison was closed and fell into disrepair, but it was then restored during the 1960s & 1970s. 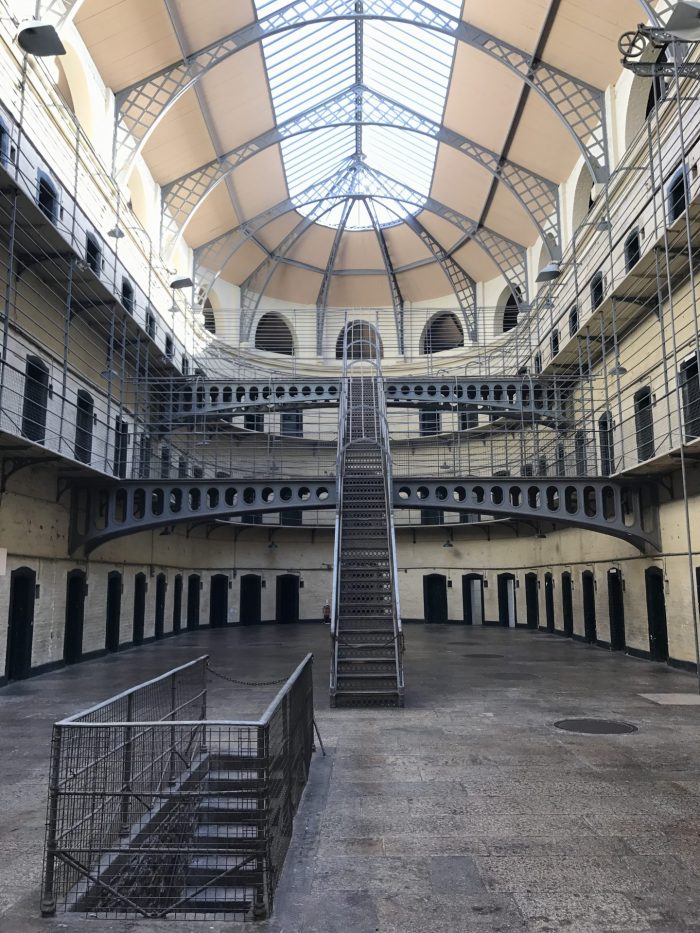 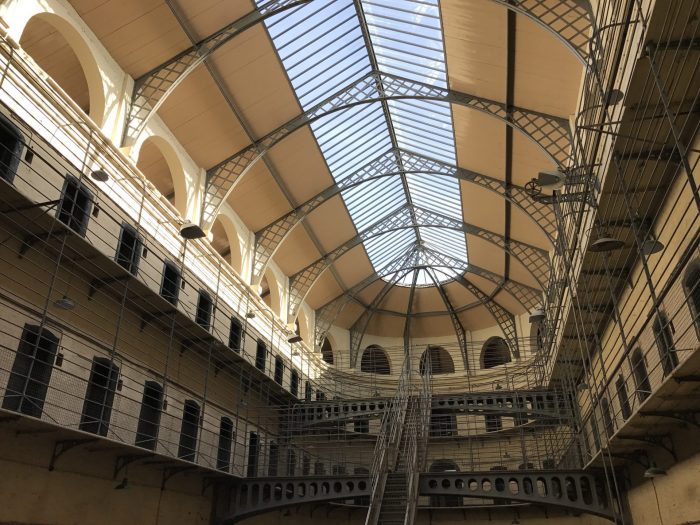 Some of the movies & TV shows filmed at Kilmainham Gaol include “The Italian Job”, “In the Name of the Father”, “The Babe”, “Michael Collins”, and “Paddington 2”. 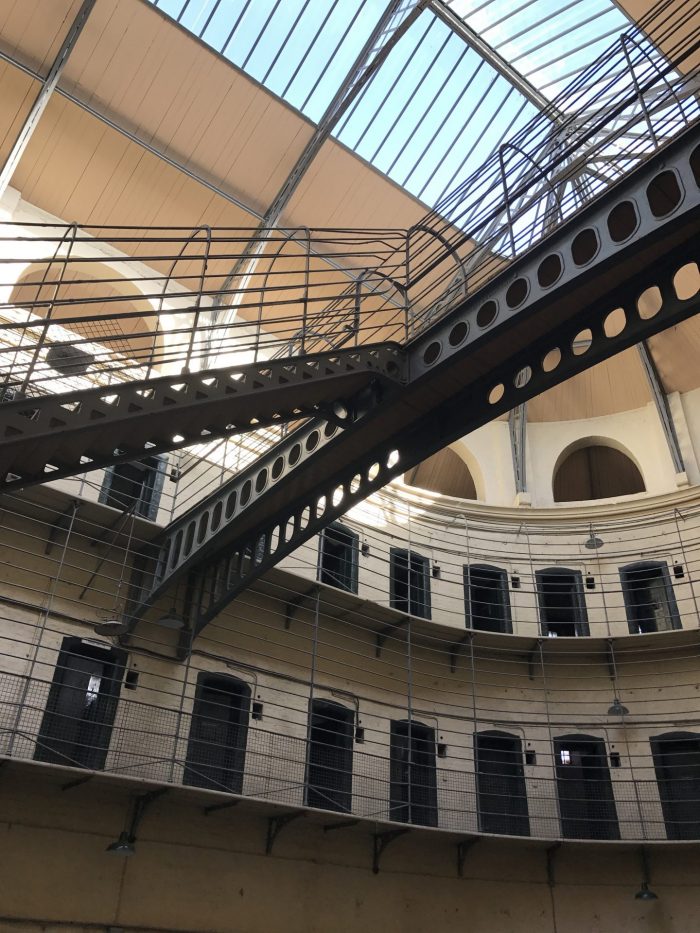 The music video for “A Celebration” by U2 was also shot at Kilmainham.

After visiting the Main Hall, the tour heads outside into the prison yard. 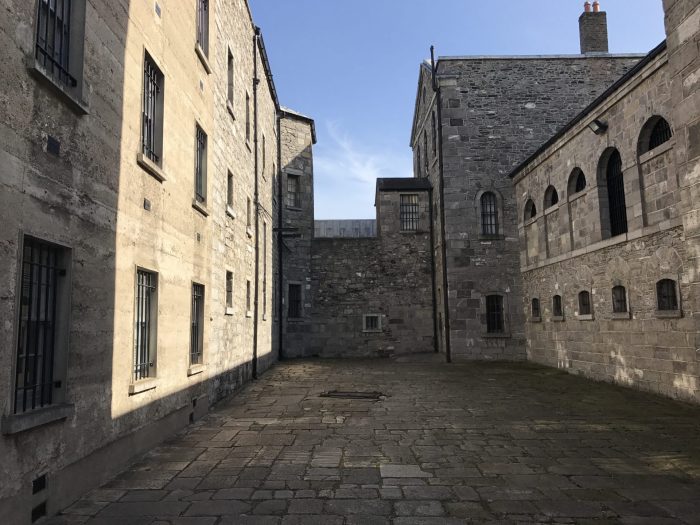 Kilmainham Gaol was nearing the end of its life as a jail just as Ireland was becoming a free nation. Following the 1916 Rising, fourteen leaders of the rebellion were executed in the prison yard of Kilmainham Gaol. As each execution took place within these tall stone walls, outrage grew in an Irish population that had previously not yet warmed to the fight for independence. One execution was especially controversial. 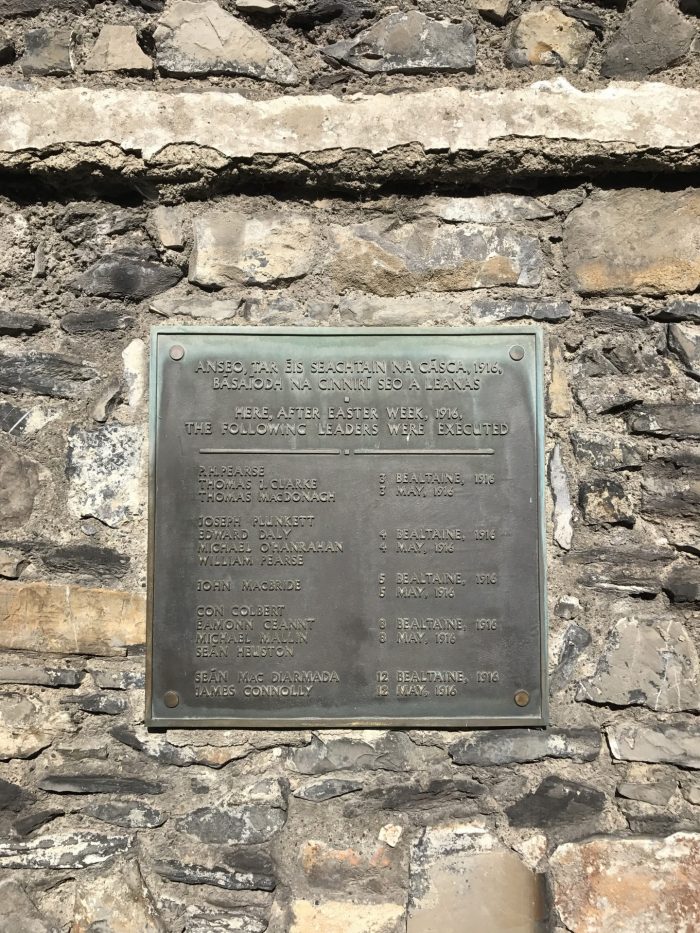 James Connolly was badly-injured from the fighting & had been held at a hospital in Dublin Castle, rather than in a regular jail. Doctors believed that he only had perhaps a couple of days to live. Unable to stand like the other men who had been executed, he was tied to a chair & shot. A black cross stands in the shadowy corner where James Connolly was killed. 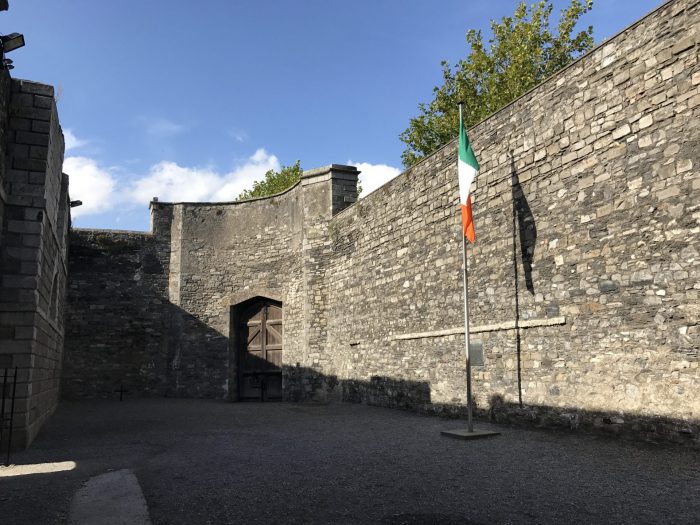 The entire tour of Kilmainham Gaol leads to this final tragic chapter. Seeing the facilities & hearing the stories is moving enough, but standing in this Stonebreaker’s Yard, the finality of such a place is evident.

Following the Kilmainham Gaol tour, there is an informative museum that you can go through at your own pace. 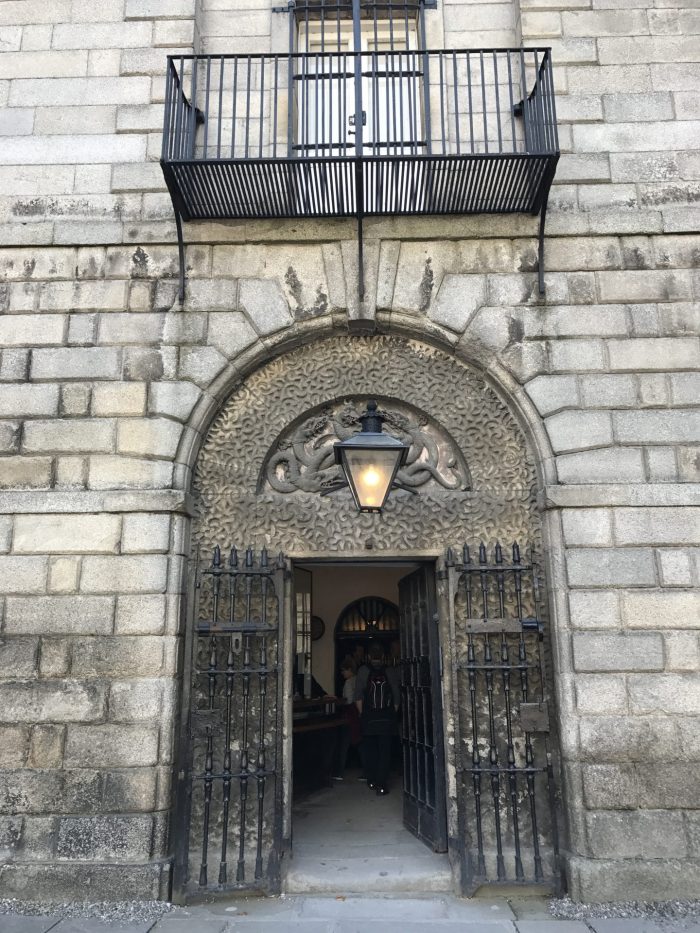 The museum has more details about the Easter Rising & other Irish nationalist events, including a copy of the original proclamation. 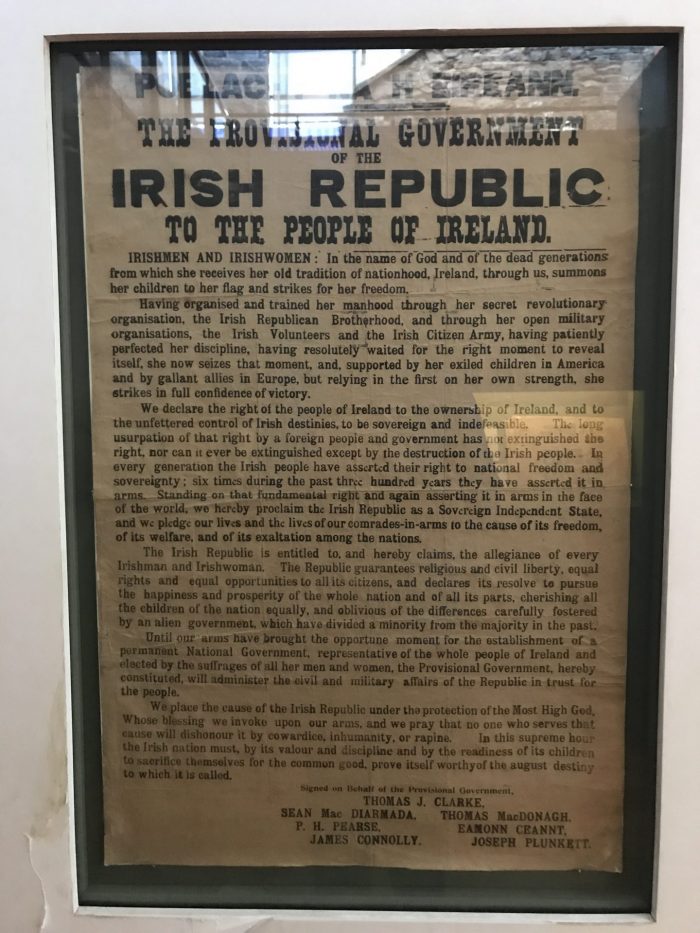 Along with the history of the Rising, there are also exhibits about earlier uprisings, rebellions, and political groups. There is also a section that details the restoration of Kilmainham, including old photos. 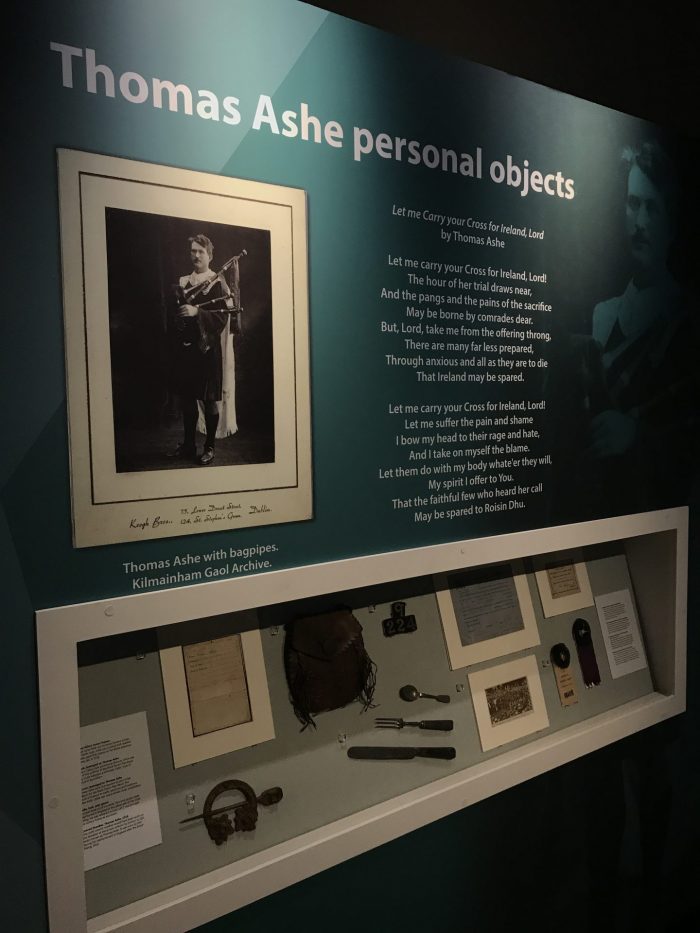 Kilmainham Gaol is very much a social history museum. It is an informative & moving experience. The stories told by the tour guides bring Irish history to life while also importing the idea that prison & societal conditions still have room for improvement in the modern day. If you’re interested in more history of Dublin, I also recommend visiting the Little Museum of Dublin & Glasnevin Cemetery.