Located about an hour and a half north of San Francisco, Santa Rosa, California is most famously known for a few things. It’s part of the heart of Northern California’s wine country in Sonoma County. Plus, it’s where “Peanuts” creator Charles Schulz lived for many years, with the city now hosting a museum about his life as well as his ice rink. Most importantly, beer lovers will best know it as one of the secret capitals of California’s stellar craft beer scene. With several breweries, other great bars, plus special events, craft beer in Santa Rosa punches far above its weight.

The most famous brewery in Santa Rosa is of course Russian River Brewing Company, maker of several great IPAs, sours, and Belgian styles. Their Pliny the Elder was one of the first double IPAs to attain legendary status. For two weeks each February, the city of Santa Rosa plays host to the annual release of Pliny the Younger, Russian River’s rare triple IPA. Beer aficionados from all over the world visit Santa Rosa & wait in line for hours at Russian River.

Additionally, beer website RateBeer held the 2nd annual RateBeer Best Festival in Santa Rosa in 2017. Once again, beer fans flocked to Santa Rosa to sample some of the best craft beer in the world.

I would be remiss to not kick this all off with Santa Rosa’s gem, Russian River Brewing Company. The brewery first opened on the Korbel property along the Russian River in nearby Guerneville in 1997. Two decades later, it’s one of the best-rated breweries in the world. Owners Vinnie & Natalie Cilurzo are craft beer legends. As I mentioned earlier, for two weeks each year, Russian River & Santa Rosa host the availability of the super rare Pliny the Younger. If you want to go during these weeks, be prepared for expensive hotel rooms & long lines to get into the brewery. I went for Pliny one year a few years ago, and we waited for about 3 hours to get in. Lines are even longer nowadays. Even on a regular Sunday, like the one I recently visited on, lines form before opening. 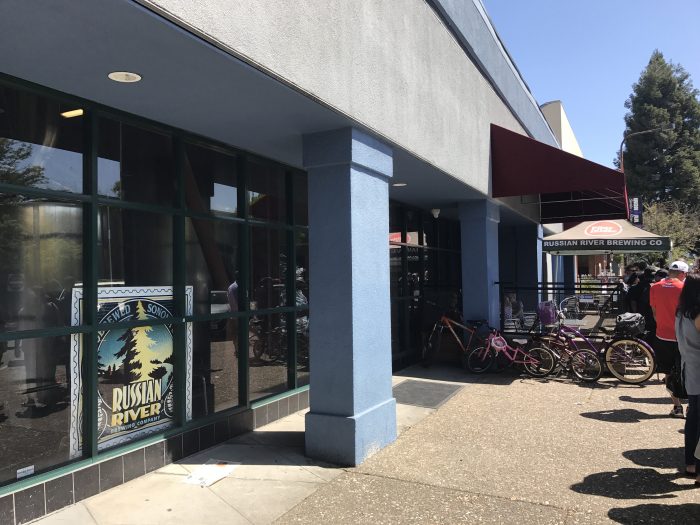 I arrived about 5 minutes before the doors opened, and there were already about 30 people waiting. Russian River Brewing Company lets people in at a trickle so as not to overwhelm the staff, but even with that, I was inside & sitting at the bar around 11:15. 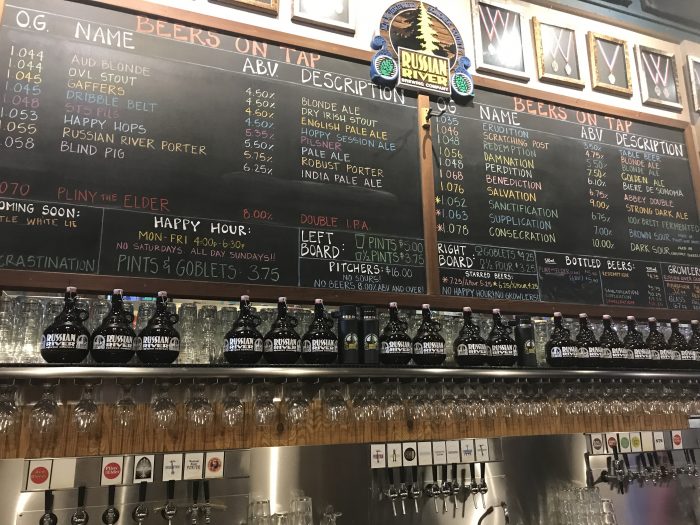 One amazing thing about Russian River is that they don’t gouge on prices, even though they could easily get people to pay double & still be crowded. On regular days, pints are just $5, while goblets are $4.25. All day Sundays, as well as for weekday happy hour, pints & goblets are just $3.75. This is fantastically cheap for anywhere, but especially Northern California. Russian River also has a solid food menu specializing in the sort of heavy carbs you’d like to soak up the great beer. 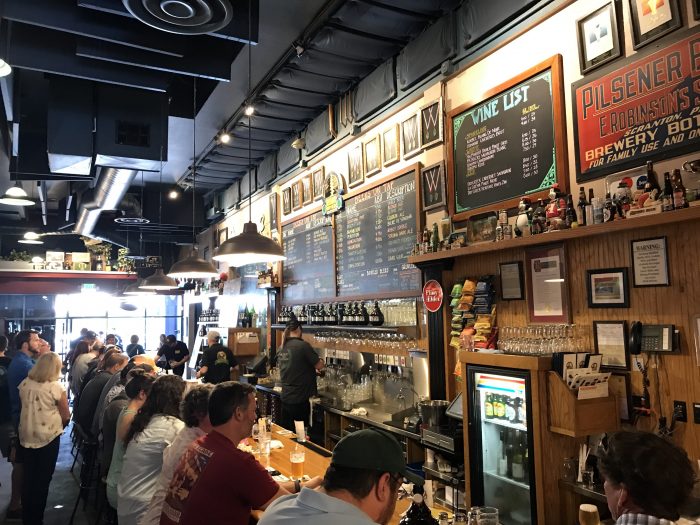 The bar features around 20 taps of Russian River beer. There are also growlers & bottles available to go. While they do specialize in IPAs & sours, there’s something for everyone. With their limited distribution, going to their taproom in Santa Rosa is the best option for getting the beer you want. Russian River is opening a new brew house in 2018, which should hopefully alleviate some of the pressure on their supply.

Located just a couple of blocks away from Russian River Brewing Company in downtown Santa Rosa is Third Street Aleworks. 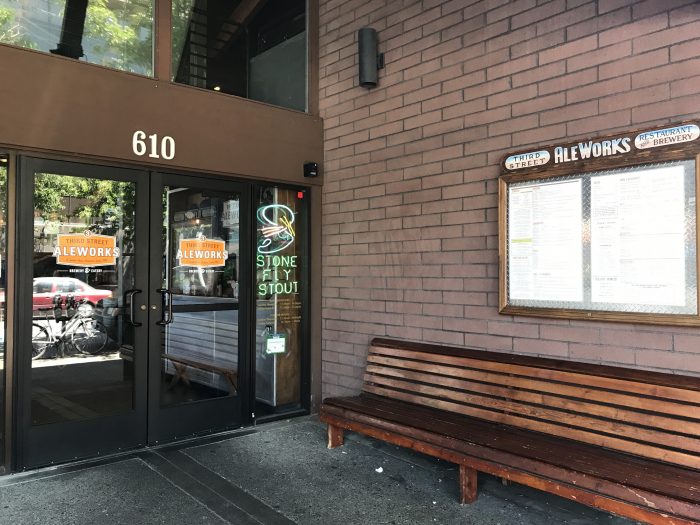 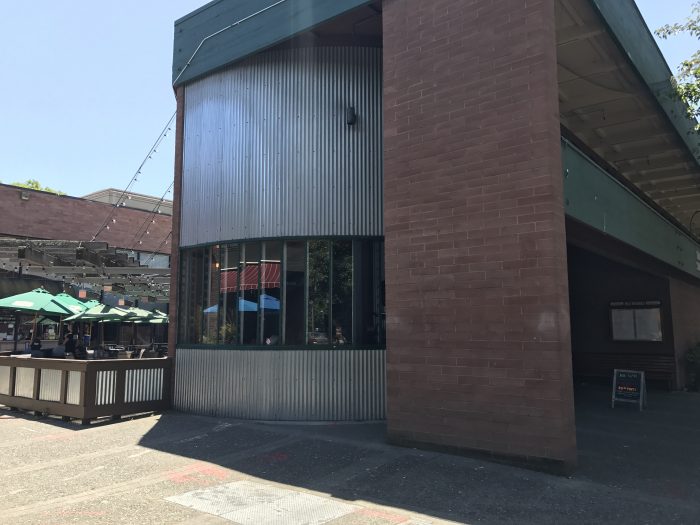 In the industrial areas of northern Santa Rosa, just off Piner Road, there are several great craft beer spots. Founded in 1992, Moonlight Brewing Company is another mainstay from the original California craft brewing movement. 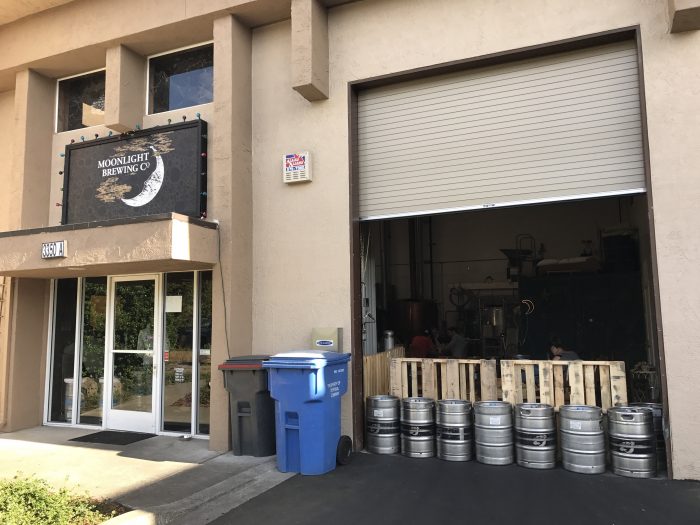 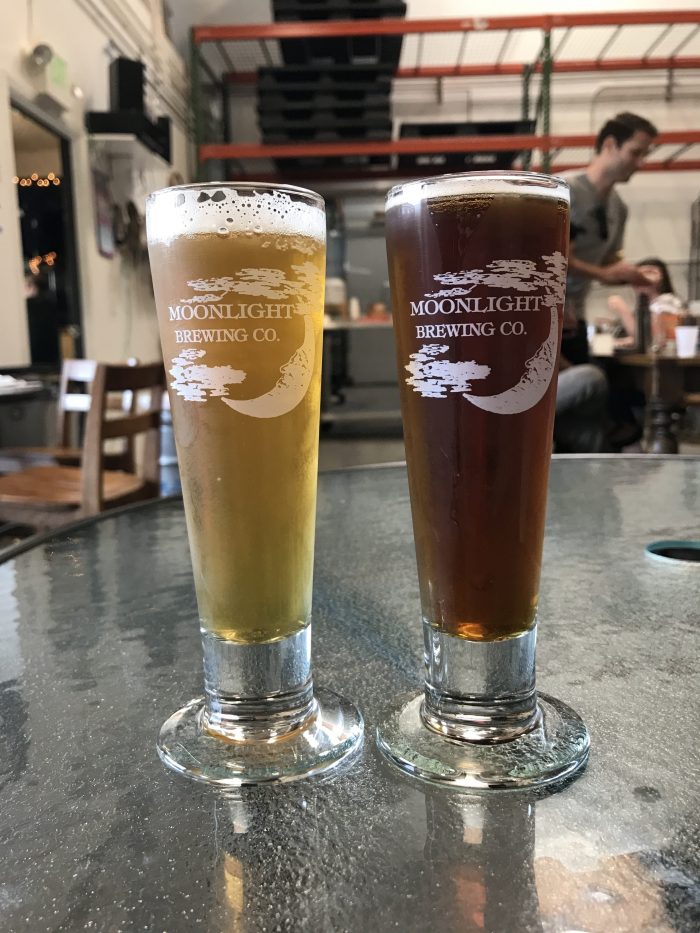 Their tap room takes up a small part of their brewery, featuring 6 taps of their own beer. It’s a chill spot, and like other breweries in Santa Rosa, the beer is cheap.

Cooperage Brewing Company is another brewery in this same area. It’s only been open for a couple of years, but brewer Tyler Smith has been brewing for longer, finally opening this dream space that specializes in hoppy beers. 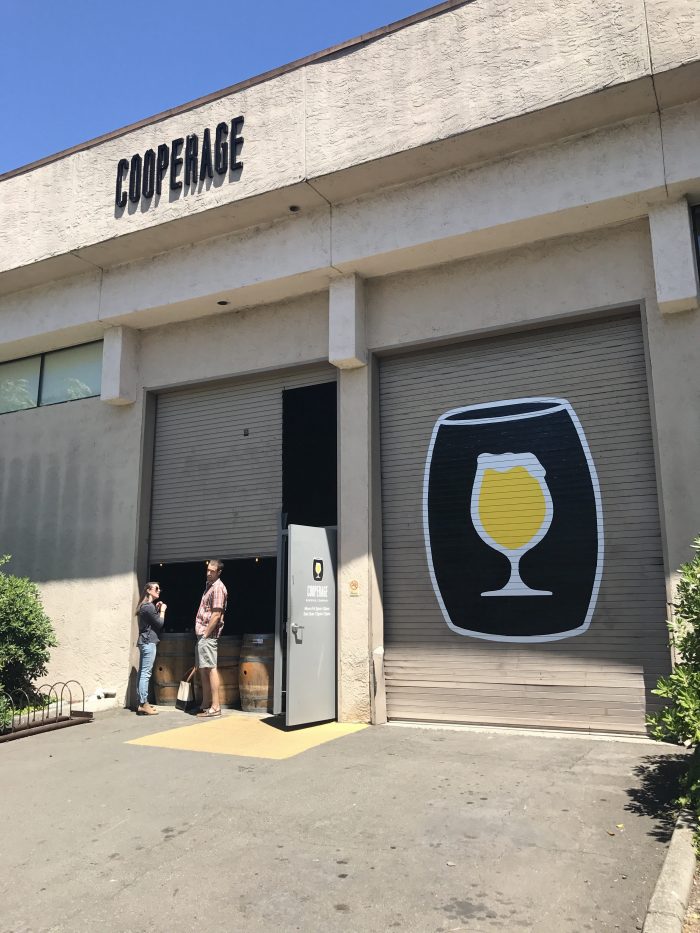 The first brewery I visited on this pilgrimage to drink craft beer in Santa Rosa was Cooperage. It was a great place to start. The bar features 10 taps of their own beer, in a variety of styles. From the looks of their list on Untappd, they are constantly putting out new beers. Once again, they had great prices, with pints costing just $5.

One of the nice things about Cooperage Brewing Company is that there’s truly something for everyone. There’s beer, of course, plus some snacks to go with it. Food trucks do stop by sometimes for larger meals. Beyond that, there’s a massive projection of sports above the bar. 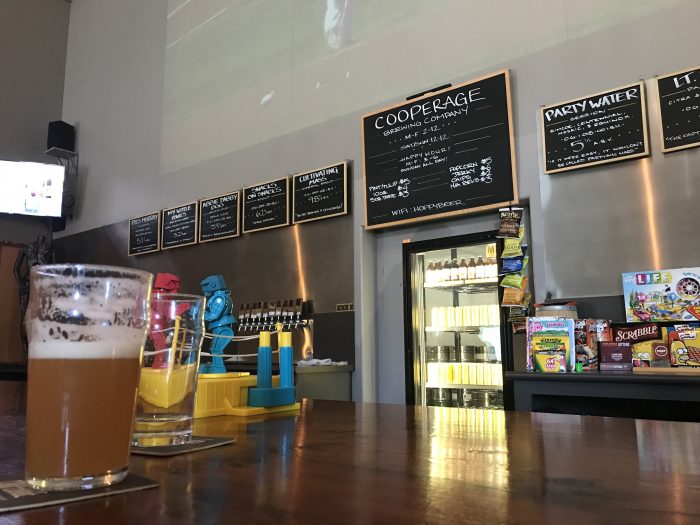 It was also one of the most family-friendly bars I’ve ever been in. Sometimes this can be uncomfortable, but it had a great vibe. There were kids playing games like Connect Four, Hungry Hungry Hippos, and Rock’em Sock’em Robots with their parents, but it didn’t feel like a playground at all. The atmosphere was laid-back, diverse, while busy but not crowded.

Plow Brewing Company is located in between Moonlight & Cooperage in northern Santa Rosa. Like the other nearby breweries, the prices are very reasonable. Since was just $2 per beaker taster, I tried all 6 beers they had on at the moment. The bar has space for up to 12 taps, depending on what they have available. 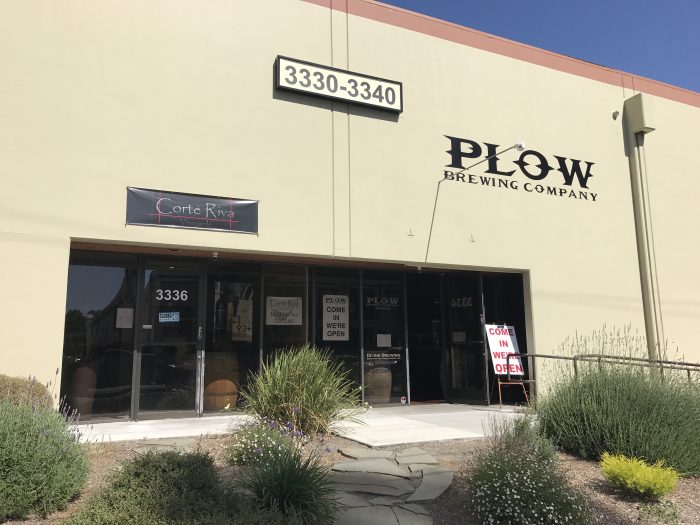 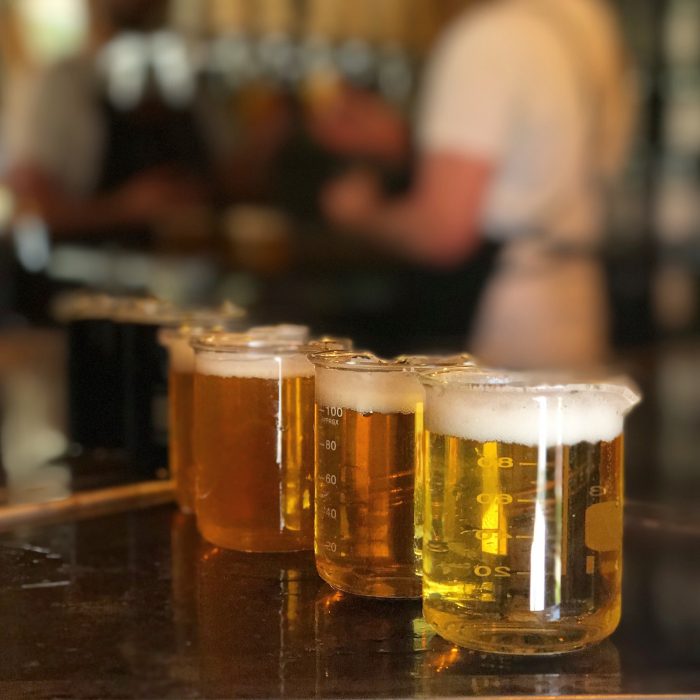 Plow was a locals sort of place. It was quieter than Cooperage, so I sat at the bar talking to a few guys who live in the area. They had a lot of stories about local craft beer in Santa Rosa, including Russian River, Lagunitas, Moonlight, and their own local businesses. These were clearly guys who have been sitting around telling bar stories for a long time. 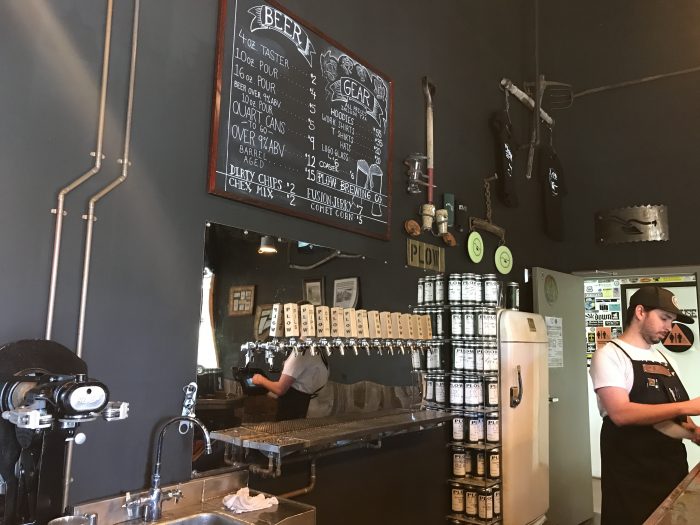 They even had an interesting beer called Engelen Tarwe by Divine Brewing. It was a pinot noir barrel aged Belgian tripel that tasted like a combination of a beer & a wine. The bartender recommended it, but nobody had wanted to have an entire bottle to themselves. Instead, I split one with my new friends.

Fogbelt Brewing Company is by itself, about halfway between the cluster of breweries off Piner & the cluster downtown. It has more of a sports bar feel to it, but the place was hopping on a Saturday night. The bar has 12 taps of their own beer on offer. They had lots of great snacks, many focused around meat and cheese, as you’d expect with beer. 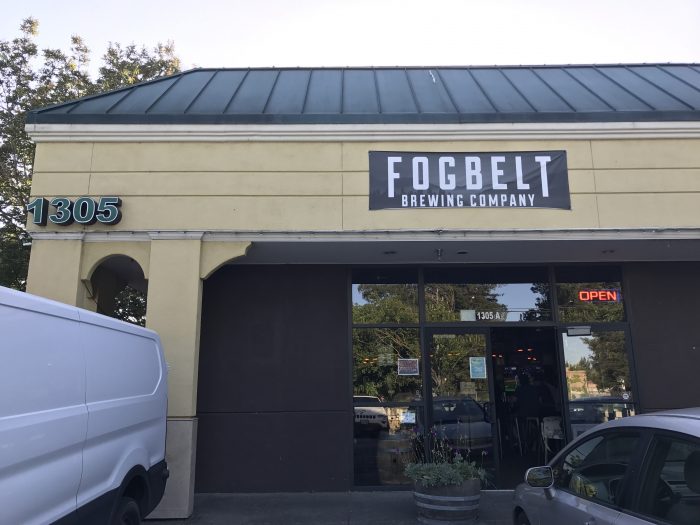 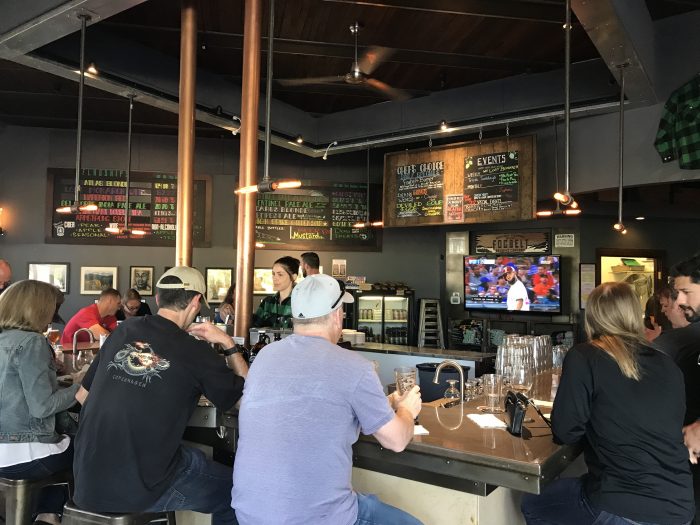 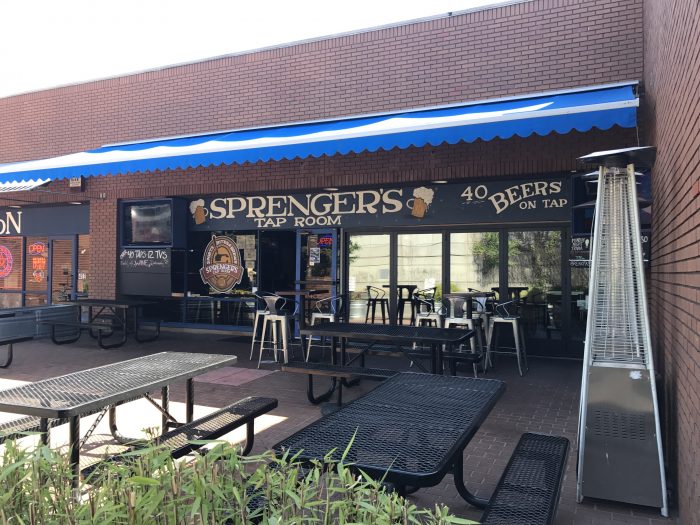 Brew is the perfect sort of neighborhood establishment one might expect to find in a college town. 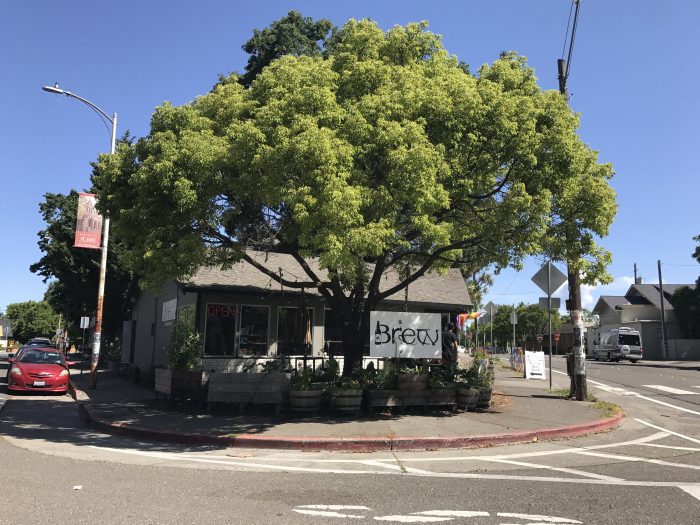 This combination coffee shop & craft beer bar in downtown Santa Rosa is busy all day long. Depending on your mood & the time of day, you can either get a nice coffee, or a selection from one of their 10 taps of an eclectic selection of beer. Since it was 10:30am, I opted for an iced latte & a tasty ginger pear muffin. 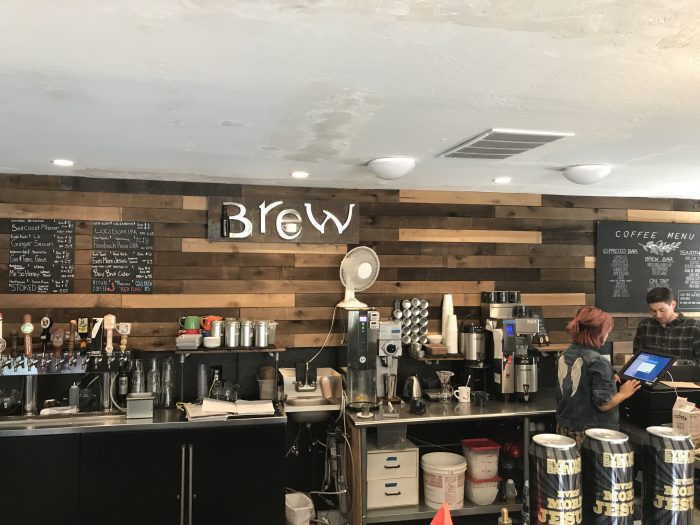 There are also games available, an outside patio, plus plenty of other spots to sit. It’s a cool little all-day hangout spot.

Downtown Santa Rosa is also home to Wilibees. I stumbled on it right as I was on my way to the bus stop to head home. At first, it looked like it was just a convenience store, but once I peeked my head in, I found heaven. Wilibees is a large shop that specializes in quality craft beer, wine, & spirits. 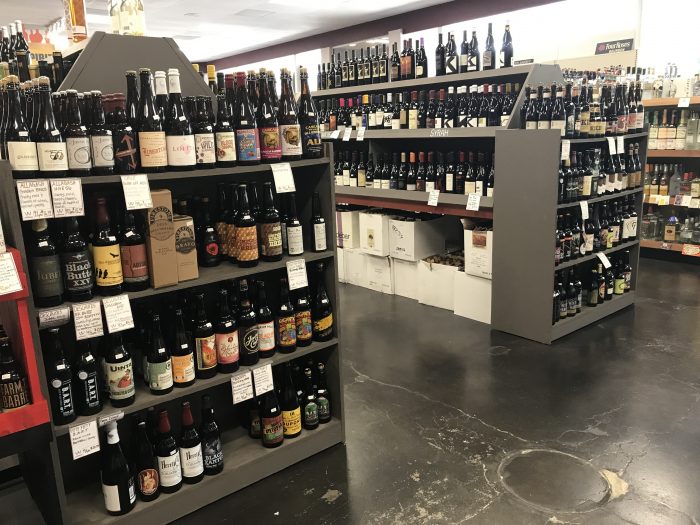 As if that isn’t enough, they also have a bar in the back corner with a huge selection of beer & wine available on tap. 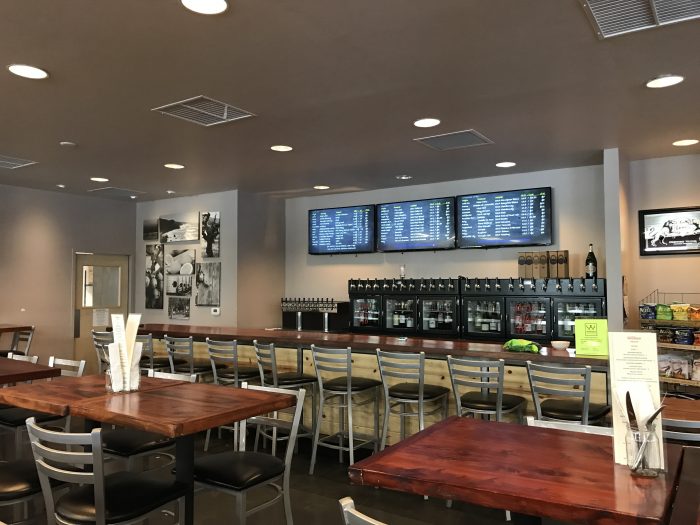 I didn’t have time for a drink, but they had a stock of rye barrel-aged Old Rasputin XVIII from a couple of years ago that I hadn’t had yet, so I bought one to take home. Wilibees is definitely a cool local business that’s dedicated to getting good drinks into the mouths of their customers.

Right across the street from Plow is Bottle Barn, a fantastic warehouse for all of your booze needs. They have any drink you could ever want, including local wines & of course a solid craft beer selection. I bought a few bottles to take home with me. 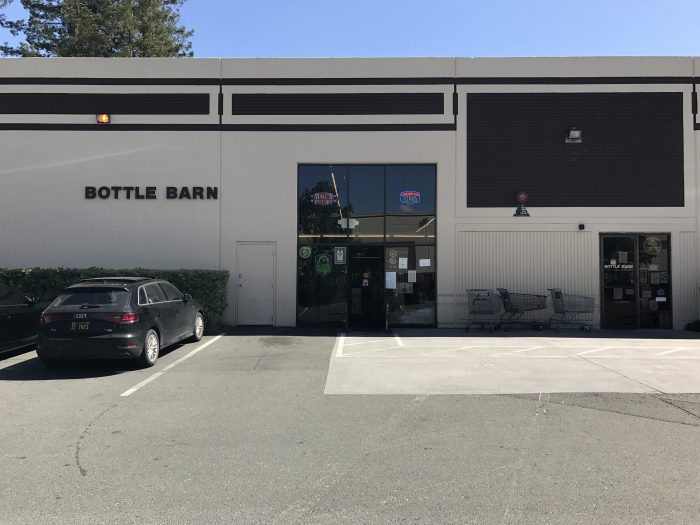 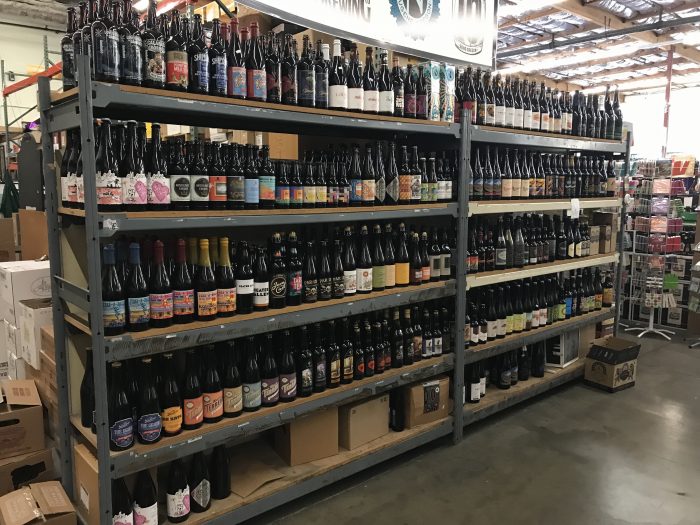 I wasn’t able to get to a couple of other places for craft beer in Santa Rosa, since they’re a bit more off the beaten path. Rincon Valley Taproom & Bottle Shop looks like a great place for beer east of downtown Santa Rosa, closer to Sonoma Valley, while Henhouse Brewing is at the southern edge of town.

Craft beer in Santa Rosa has a long history, and with new breweries joining the old stalwarts as part of the local scene, the city is cementing its status as a must-visit destination for any craft beer lover.

Spotted any other great Santa Rosa beer bars? Let me know in the comments!

Update: October 14, 2017. The fires in Santa Rosa have been tragic. Thousands of people have lost their homes, and sadly, many people have lost their lives. As of this writing, all of the breweries in Santa Rosa have made it through the fires, though several of them were just blocks away from neighborhoods that were destroyed. As Santa Rosa recovers, I urge you to support them as well as the rest of the local community. For more info on how you can help, please visit Sonomapride.com.