For people who have a Priority Pass business lounge card, there’s one lounge available in San Francisco, the Air France-KLM Lounge in International Terminal A. Due to the layout of the airport and the airlines served in that terminal, the lounge is only useful to some passengers. Thanks to the current quirk of SFO’s airline departure gates, this usefulness extends to people flying on Alaska Airlines & JetBlue. I visited the Air France & KLM Lounge SFO before a recent flight on Alaska.

As you pass through security, the hallway leading to several lounges is on the left. Down this hallway you’ll find the Air France-KLM Lounge SFO. 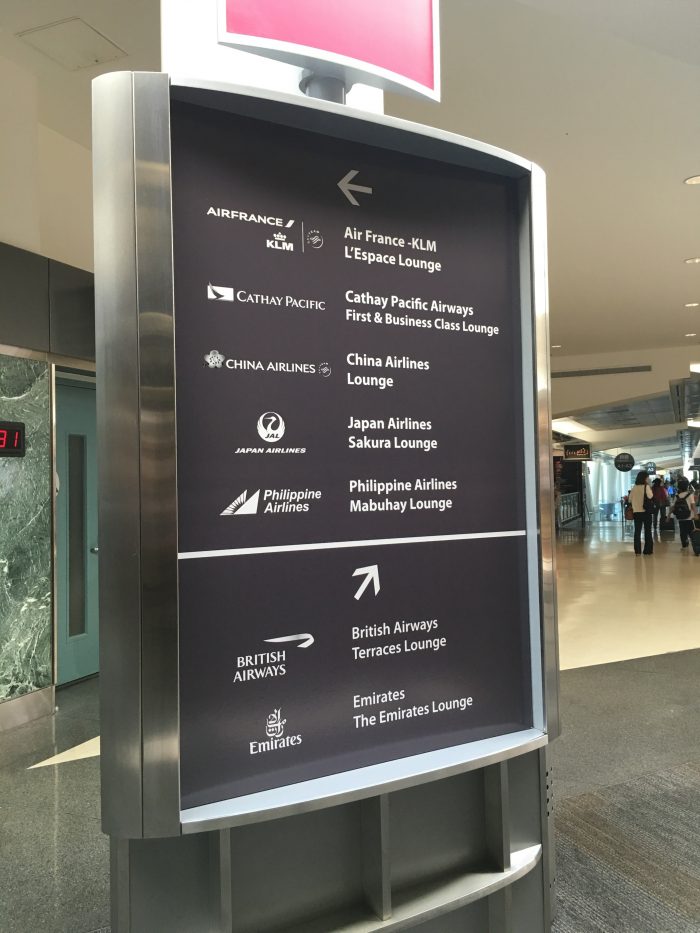 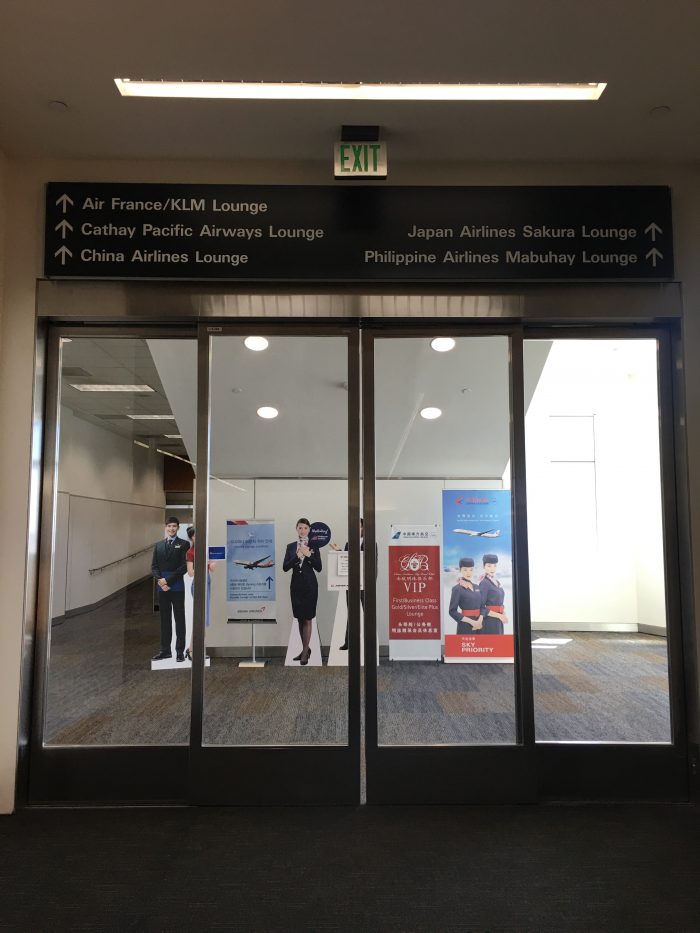 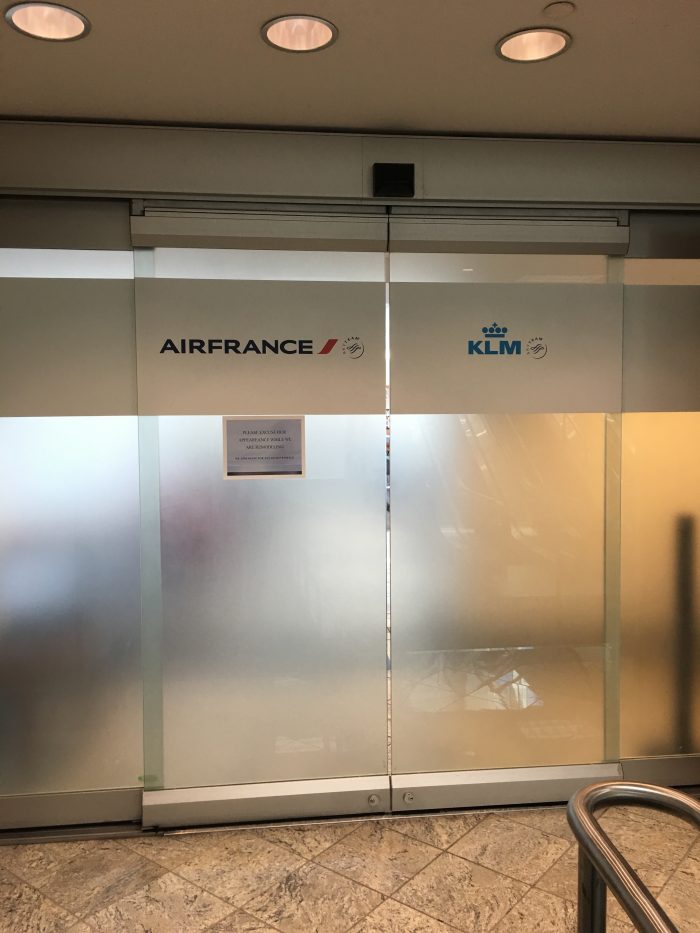 The first rooms of the KLM Lounge SFO were almost empty since there are no real amenities here. Almost all of the chairs are the same, which doesn’t allow for much selection based on personal preferences, nor are they particularly comfortable. 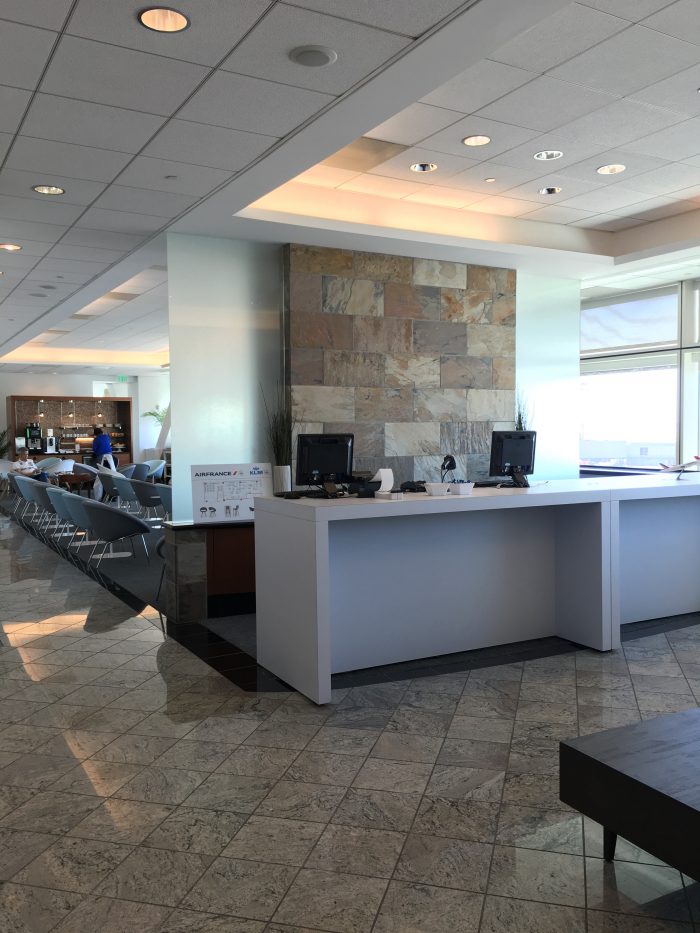 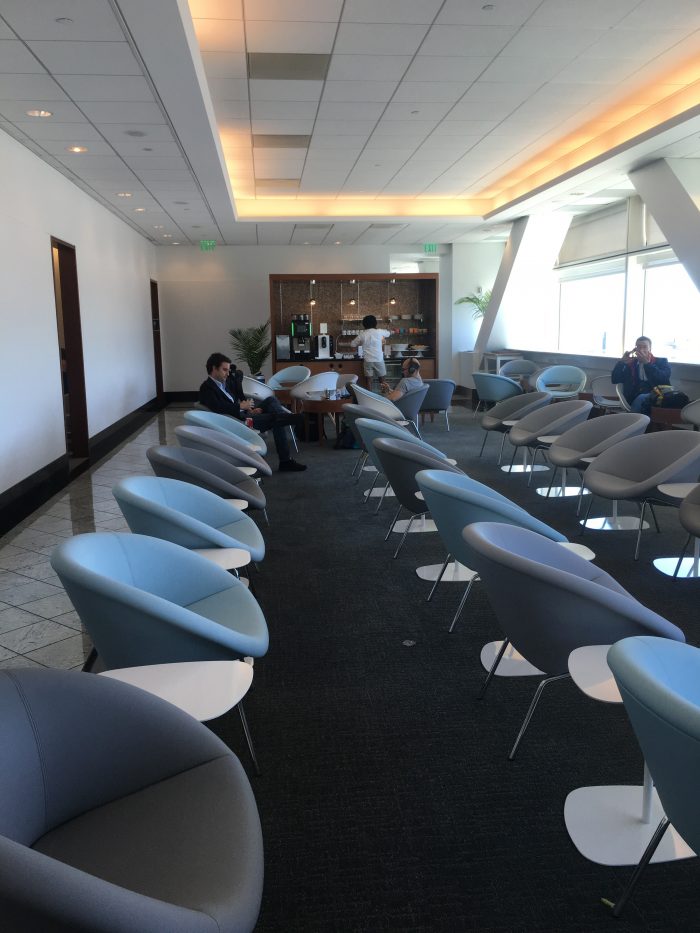 Being an international lounge, there are plenty of foreign newspapers available. 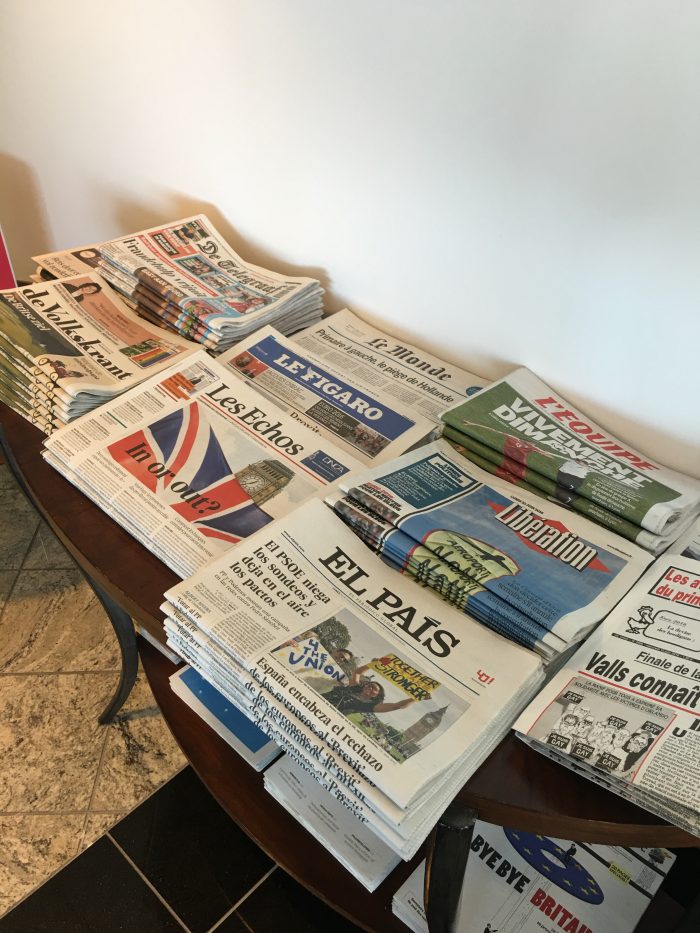 There are work counters, but I did not see power outlets at them. Plus, with the way they face backward into the lounge, there’s not much screen privacy. Thanks to being on an upper floor & there being plenty of windows, the lounge is very bright with great views, which is nice. 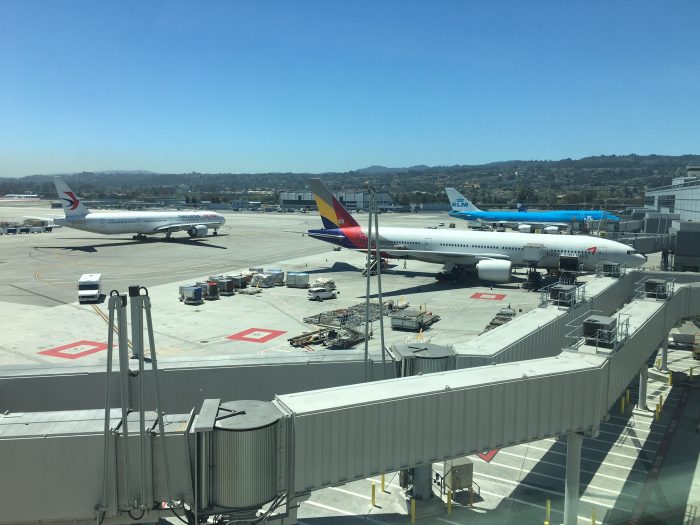 Instead of sitting in the main room, a lot of people head to the back since that’s where the food, drinks, and TV are. The one TV was tuned to the Euro soccer tournament when I was there. With so many tables set up for four people, it wasn’t the most efficient use of space. 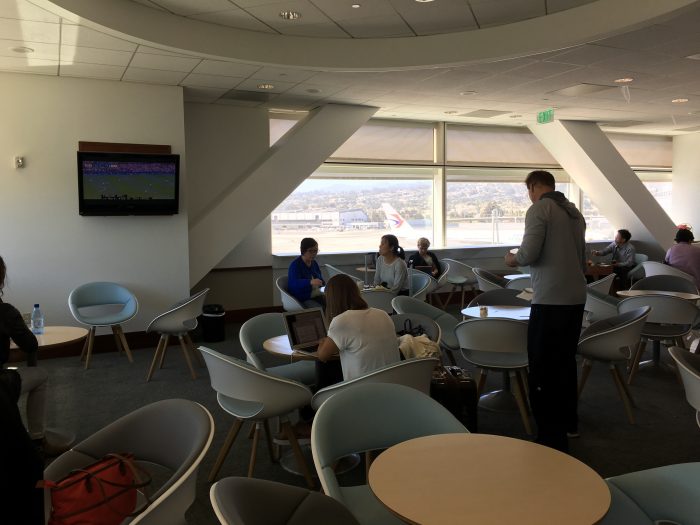 I visited the lounge right at the end of breakfast. There were cold breakfast sandwiches, as well as pound cake and snacks. 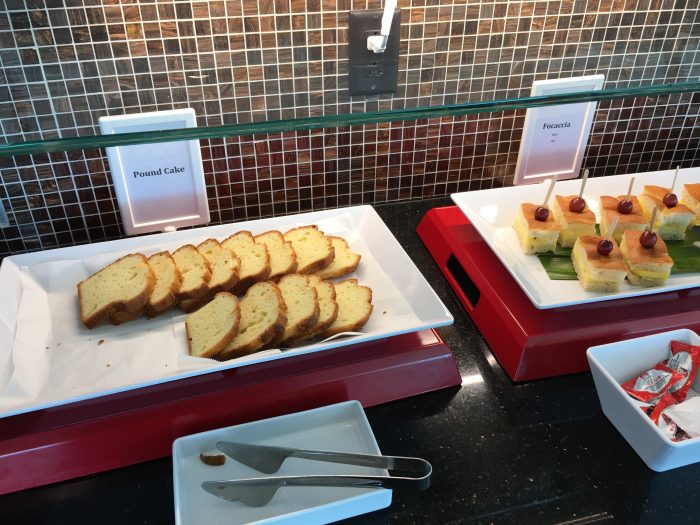 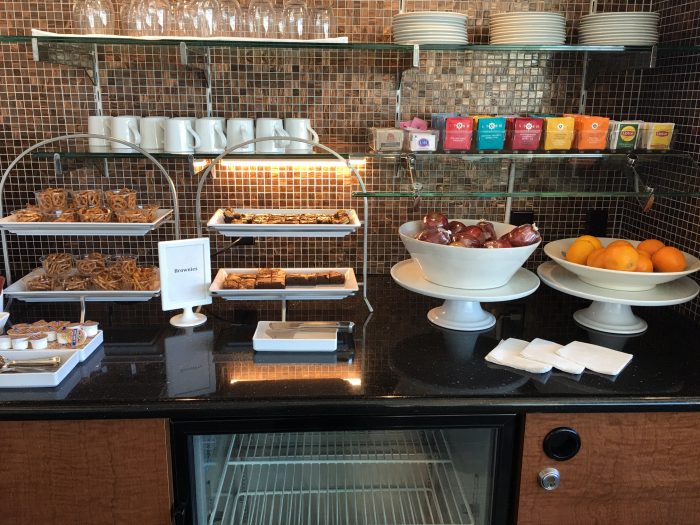 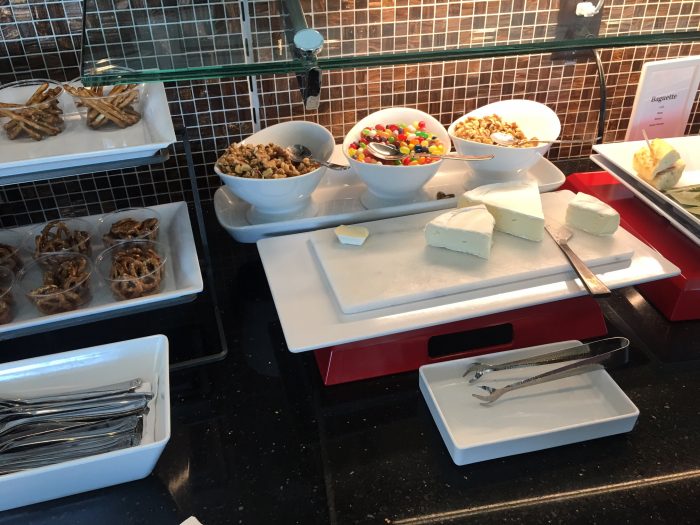 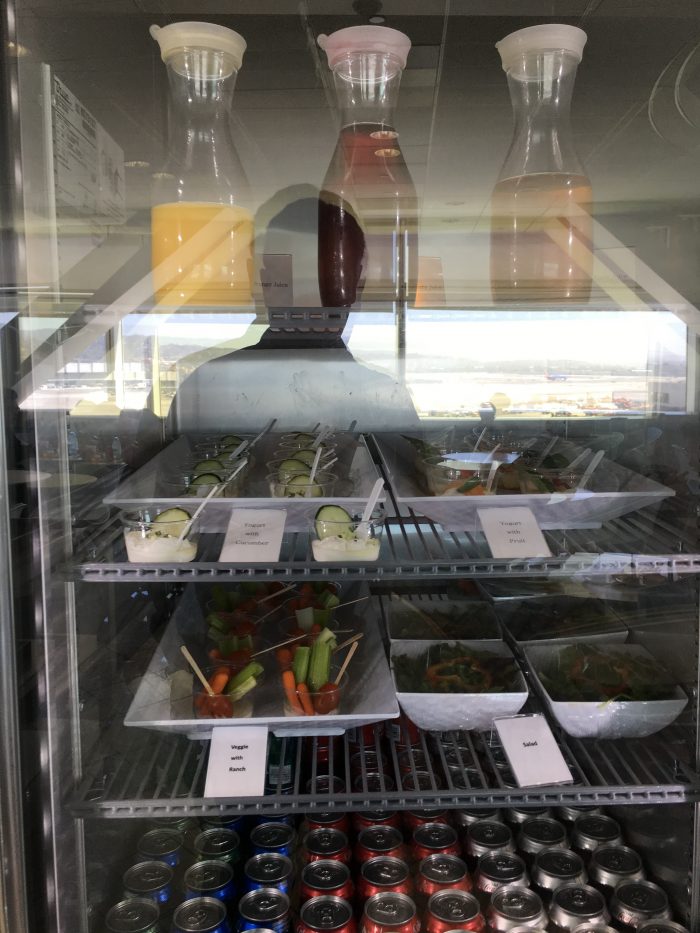 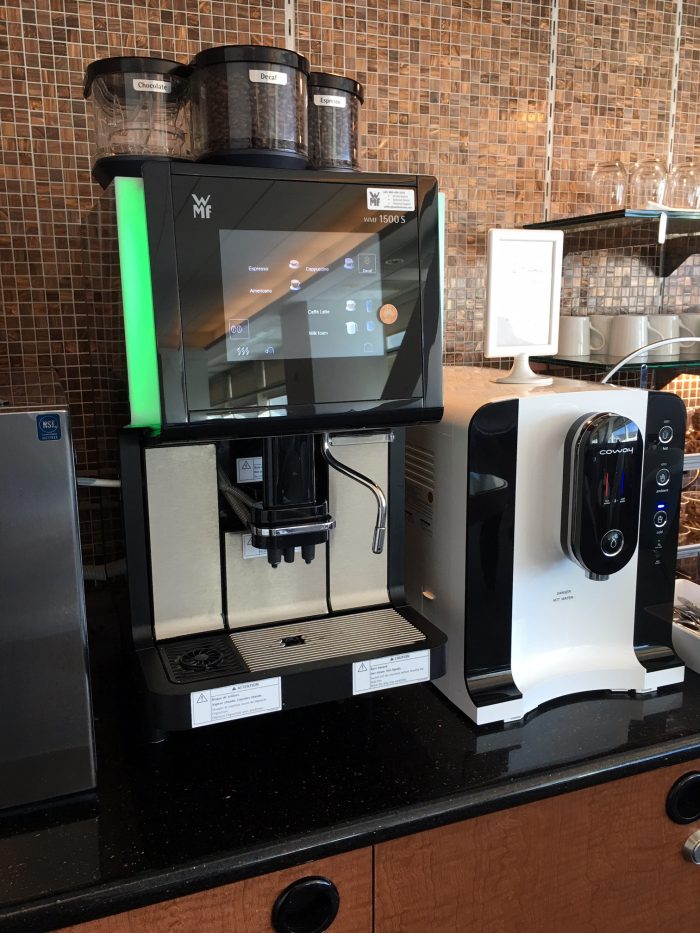 A little while later, lunch was brought out, featuring sandwiches, fruit, and veggies. 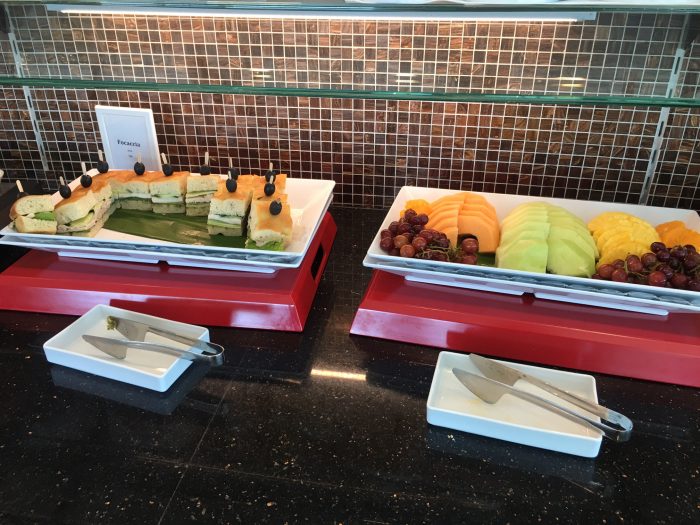 One original aspect of the lounge I’d not seen elsewhere is the olive oil, vinegar, and bread bar. It’s such a simple offering, but it’s a unique idea. 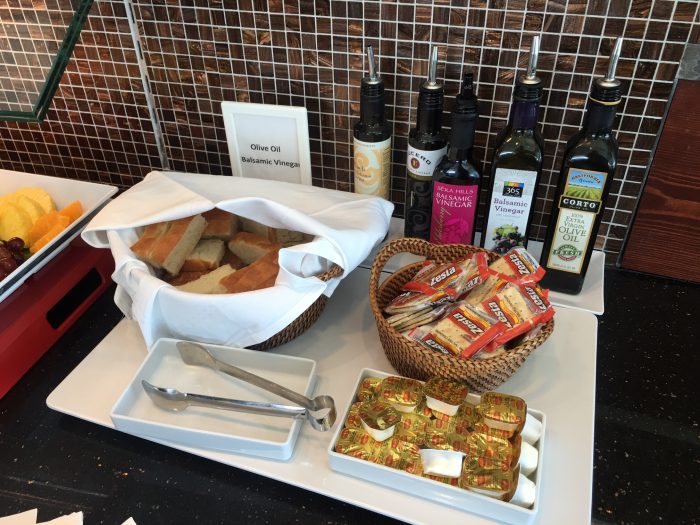 There was also a bar with a mediocre selection, though it did have port. 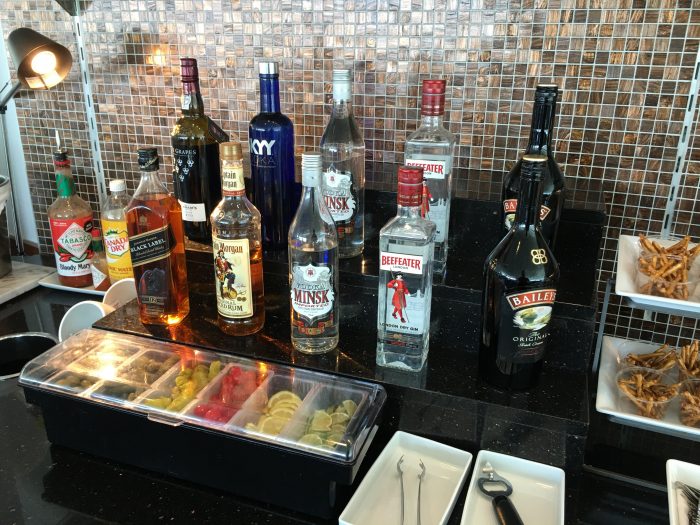 Now back to the recent changes to the lounge. The business center that used to be located in the lounge has been removed as part of the remodel. Instead, there was a room with lots of power outlets, plus lots of small, low tables. Thanks to having no windows and only the one door, it’s claustrophobic and not great to work in. Yet because there are outlets here and not many elsewhere, this is where most lounge visitors end up. When I arrived, the whole lounge was fairly empty, but it quickly filled up as it got closer to the international departure times. 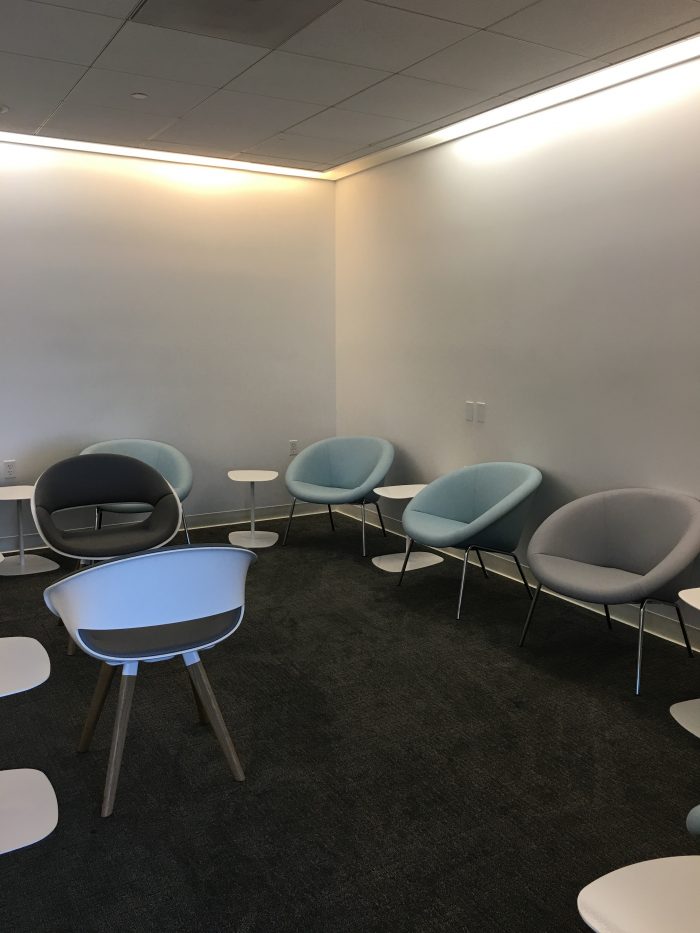 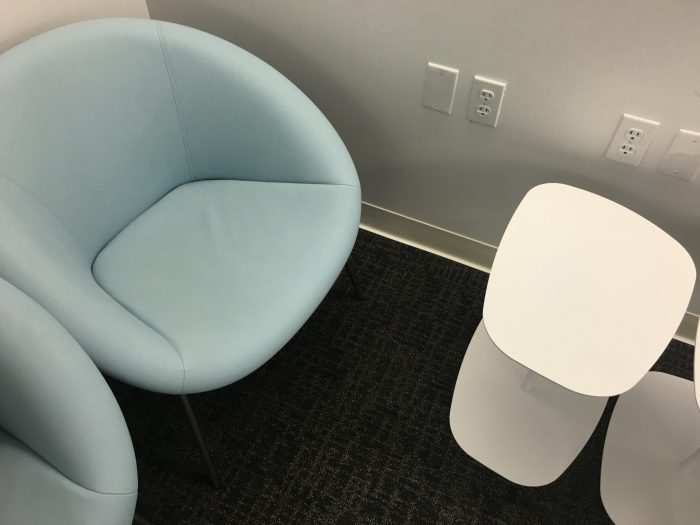 Not having been in the lounge previously, I don’t know which layout was better, a true business center or what feels like a bad open plan office. Sure, it gives the Air France-KLM Lounge SFO more space, but it’s not great for work. It’s such a small room, packed with people during peak times, that any noise stands out. Everyone awkwardly tries to stay quiet. One guy who received a call was aware of this and was nice enough to head outside to take it.

Given that it’s a Priority Pass lounge, plus there are a few international SkyTeam flights that give access to it, the Air France & KLM lounge SFO can be very crowded if you visit at the wrong time. It’s better than nothing if it’s the only lounge access you have, but go in with low expectations. The food & service are solid, but the space itself still needs improvement.