The Vizcaya Bridge near Bilbao, Spain is like no bridge you’ve ever seen. It was the first ever transporter bridge built in the world, and it’s one of the few surviving examples of this engineering still in use. Thanks to its unique construction, the Vizcaya Bridge was named a UNESCO World Heritage Site. The Vizcaya Bridge connects Portugalete & Getxo, two pleasant port towns along the Bay of Biscay. Since it’s easy to get to the area by public transportation, a visit to the historic Vizcaya Bridge is a nice detour for anyone interested in engineering or anyone traveling with kids. 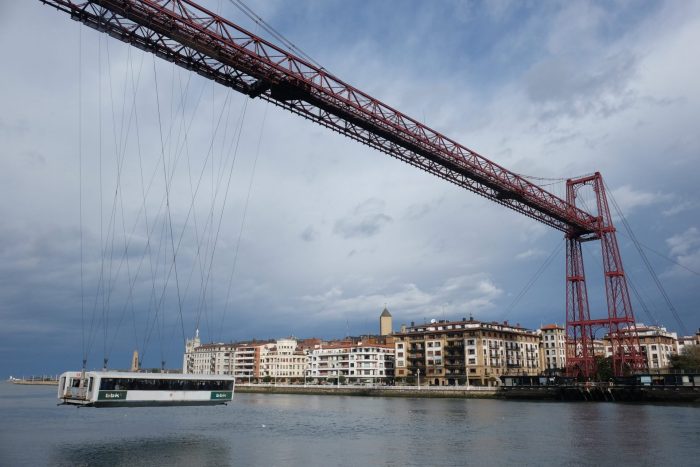 What is a transporter bridge?

A transporter bridge or ferry bridge is a bridge that has a segment that moves across the water. This moving segment is suspended either by wires or a frame from above. This design allows ships to pass by below the wires or frame, while traffic can simply drive or walk on to the platform & be transported to the other side. The structure allows for a quicker & more stable passage than a ferry and a smaller imprint than a drawbridge, which would need ramps for access.

Charles Smith conceived the concept of a transporter bridge in 1873. He pitched his idea of a “bridge ferry” to several cities in the United Kingdom, but his attempts to get one built were unsuccessful. Fewer than two dozen transporter bridges were ever constructed, mostly due to the eventual popularity of the automobile & the ensuing weight limitations for these bridges. Fewer still remain, with just a handful of ferry bridges actually in use today. The most prominent is the Vizcaya Bridge near Bilbao, the original transporter bridge. 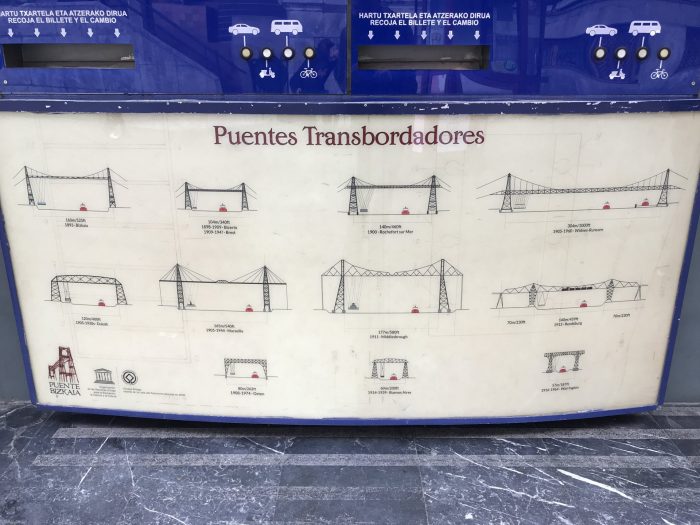 The history of Vizcaya Bridge

The Vizcaya Bridge was built between Portugalete & Getxo, Spain in 1893. Designed by Alberto de Palacio, who also designed structures in Madrid’s Parque Retiro, the Vizcaya Bridge crosses the mouth of the Nervion River, which flows through Bilbao.

The ingenious design was used for several reasons. First, due to its location in the busy Port of Bilbao, ships needed to pass by frequently. The height of Vizcaya Bridge allows tall ships to pass easily. The proximity of the city on both sides was another factor, as there wasn’t space for a bridge approach. This triumph connects both Bilbao’s shipbuilding & iron industries, which were prominent in the 19th century. It was the first transporter bridge constructed anywhere in the world.

The towers are 61 meters tall, with the main girders & rails 45 meters above the water. From these rails, the gondola hangs below, supported by lightweight twisted steel cables. The gondola then travels across the 160 meter wide estuary by 36 wheels along the rails. 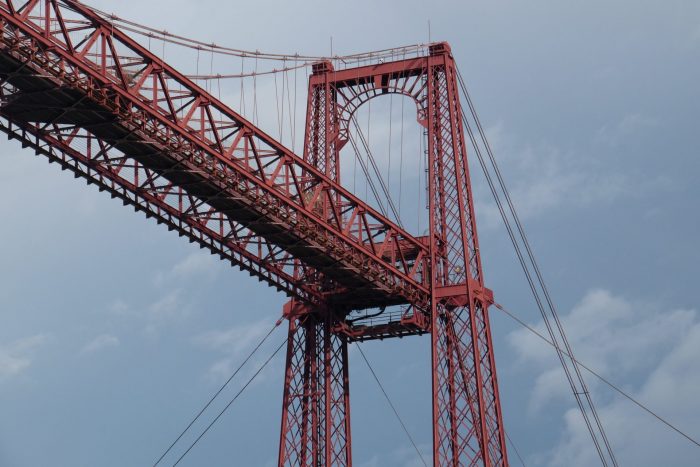 The iron for the bridge was extracted in Basque Contry, making it a symbol of this industry & local ingenuity. The use of metal is reminiscent of the Eiffel Tower. This makes sense since de Palacio was a disciple of Gustave Eiffel. The Vizcaya Bridge was named a UNESCO World Heritage Site in 2006, thanks to its survival as an icon of the Industrial Revolution. This status will help ensure the preservation of this engineering marvel for generations to come. 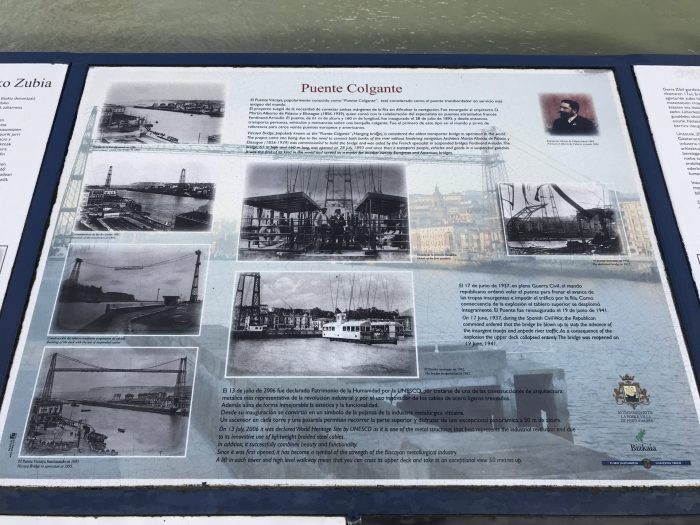 Elevators were added to the towers of the Portugalete transporter bridge in 1999, allowing adventurous visitors with better tolerance of heights than myself to walk across the top & get a closer look at the mechanics of the bridge & the cities below. 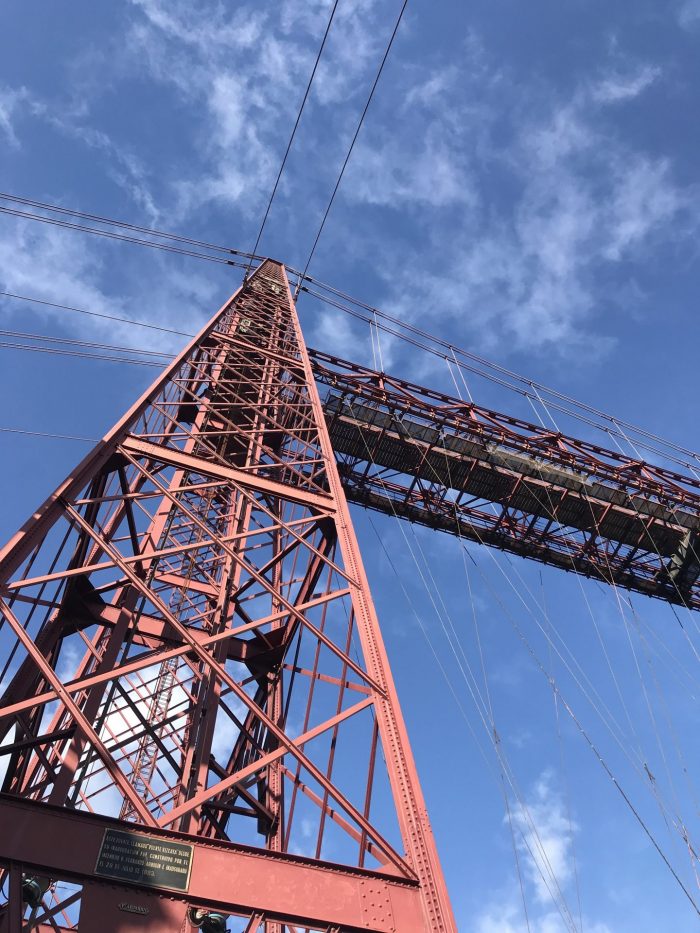 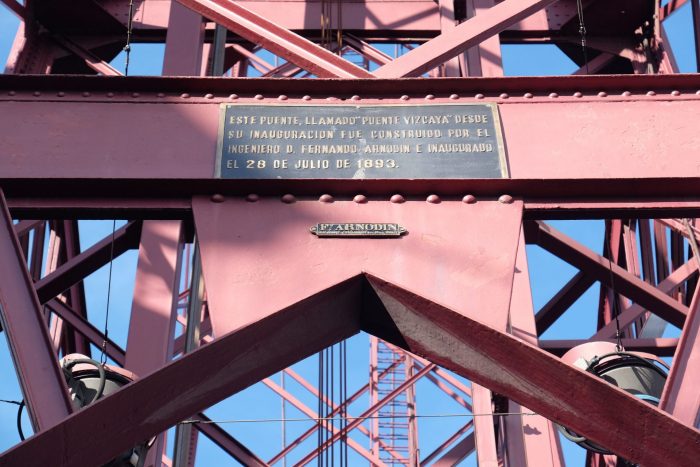 Most of the surviving transporter bridges around the world are either not in use or see limited traffic, but the Vizcaya Bridge is still a popular connection between Portugalete & Getxo. Known locally as the Puente Colgante (Hanging Bridge), not only is it an easy way to get across the Nervion, it’s also fun.

The gondola traverses the water 24 hours a day, just as it has since it opened. The only break was after the bridge suffered damage during the Spanish Civil War. Over this time, hundreds of millions of passengers have crossed the water. The gondolas have been updated a few times over the years, but aside from that, the ride is the same as it has been since 1893. 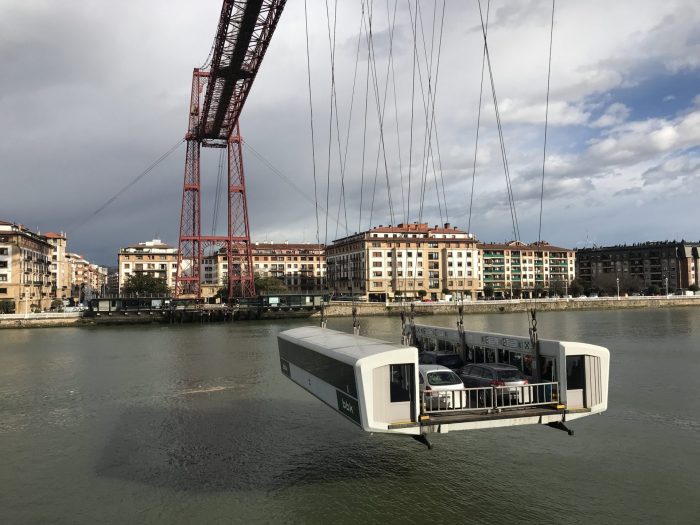 During the day, rides occur every 8 minutes, then every hour at night during slower times of the year. The ride takes about 90 seconds. Each passage has room for up to 6 vehicles and dozens of foot passengers. Tickets are cheap, especially if you use the Barik card. The Barik card is also helpful for getting from Bilbao to Portugalete or Getxo in the first place.

The cool video below has a full collection of photos from 125 years of the history of Vizcaya Bridge, including various construction projects.

I started my day trip to Vizcaya Bridge (website) by taking the Metro out to Portugulete using the Barik card. Trains run every 5 to 10 minutes, depending on the time of day. This line runs underground for much of the journey.

Portugalete is a pretty medieval port town. The Casco Viejo (Old Town), with its narrow steep streets, was quiet on New Year’s Day aside from a couple of open pintxo bars. 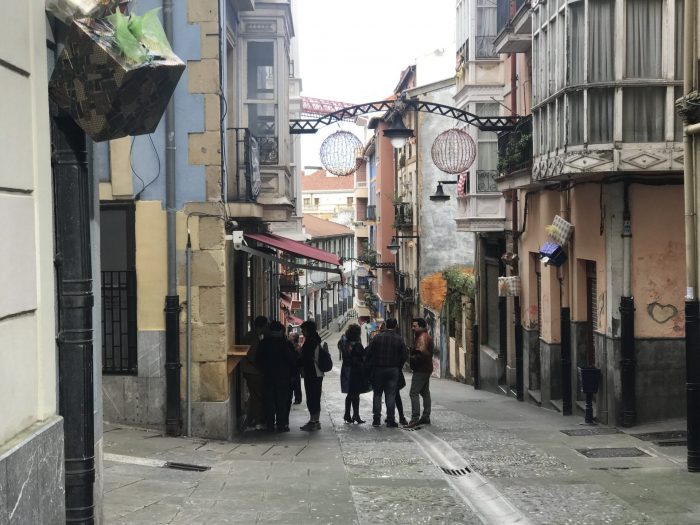 In addition to these bars & restaurants, there is also a nice waterfront park that follows the shoreline of the Bilbao Estuary. Other highlights include the Santa Maria Basillica, Salazar Tower, and the Rialia Museum, which covers the area’s industrial history. Portugalete isn’t on the radar of most tourists, but combine it with the Vizcaya Bridge & Getxo across the Nervion, and it’s a nice little day trip.

Following Casilda Iturrizar Kalea, with its convenient moving sidewalk, you’ll get your first glimpse of the Puente Colgante. 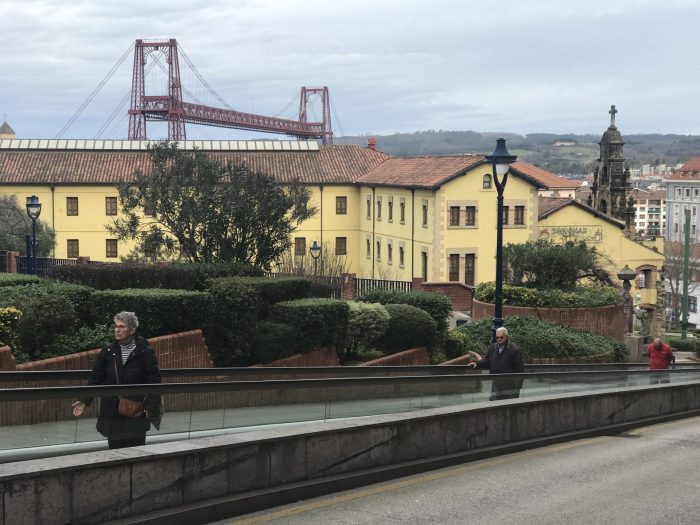 Visiting & traveling across the Vizcaya Bridge

It’s one thing to hear about a unique bridge like this, but seeing the Vizcaya Bridge in operation is breathtaking. While the souvenir & ticket office attract the attention of most visitors, be sure to head onto the viewing platforms just above them. Not many people go up here, so it’s a quiet place to watch the bridge & river activity. It’s one of those things that people of any age will find entertaining. Or maybe that’s just me. 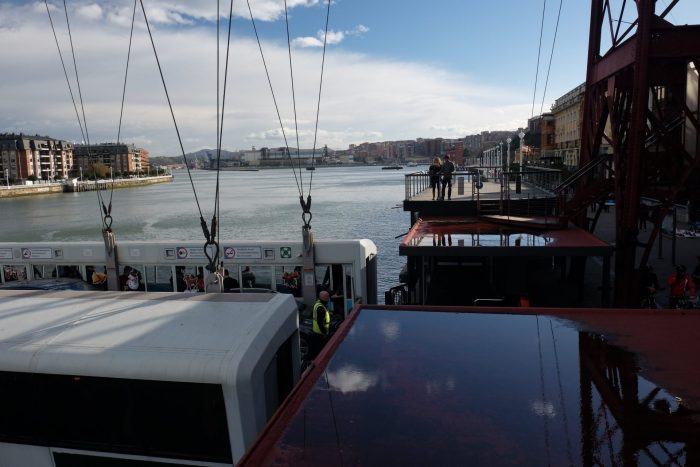 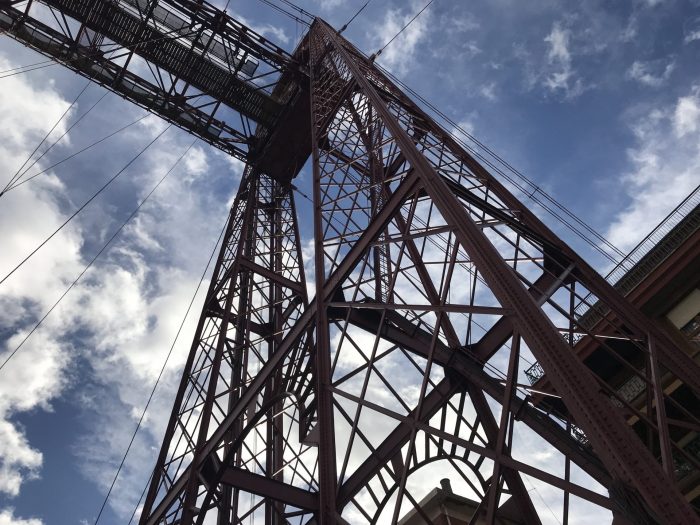 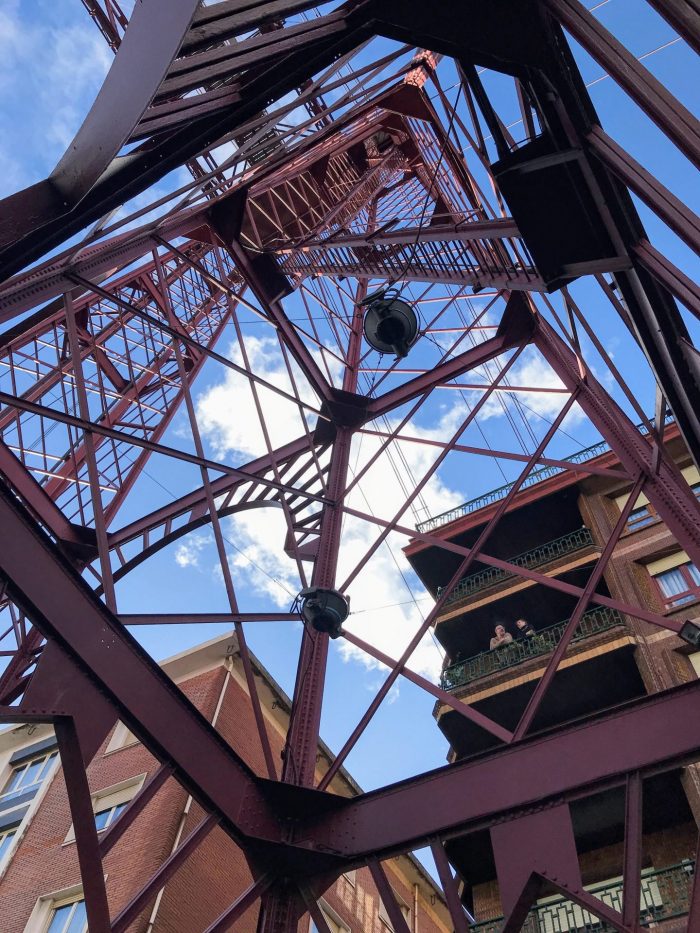 After taking in the views of Vizcaya Bridge in action, it was time to actually go across it to Getxo. In the gondola, of course. There was no way I was going to take the tour of the upper bridge, even if it hadn’t been closed for New Year’s that day.

I had to wait a few minutes for the gondola to come back from Getxo. Once it did, I was on the next ride. 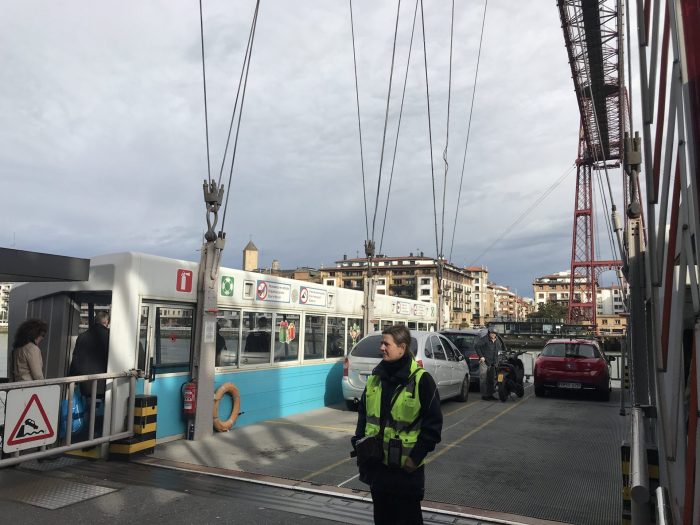 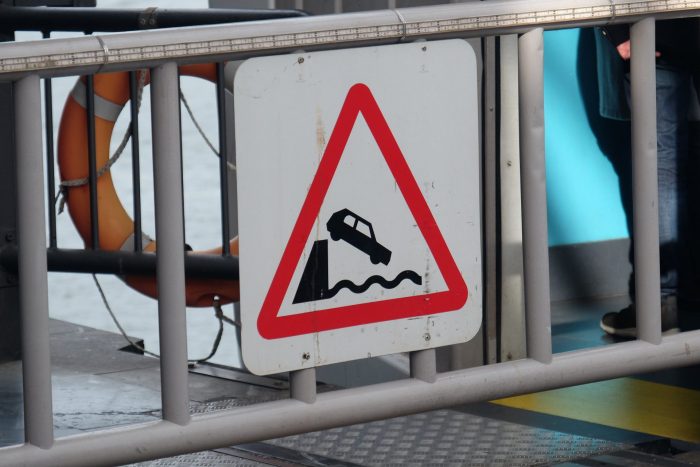 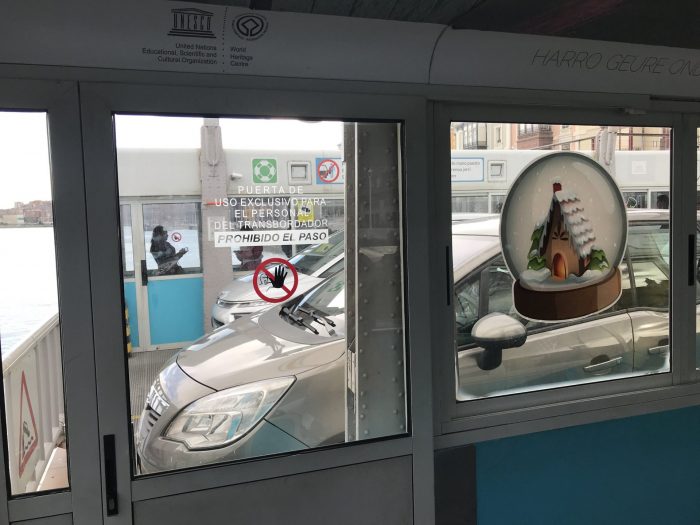 The journey is smooth, and it’s over in no time at all. After 90 seconds, you’re on the other shore. 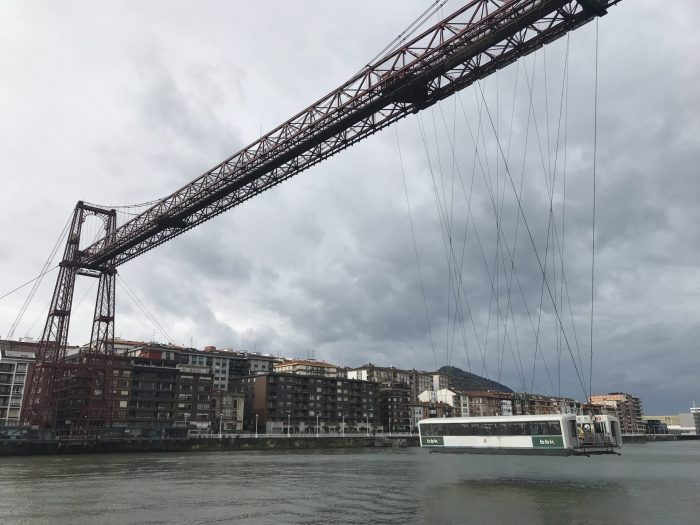 On the Getxo side of Vizcaya Bridge, there’s a garden plaza. Beyond is Las Arenas & the rest of Getxo. 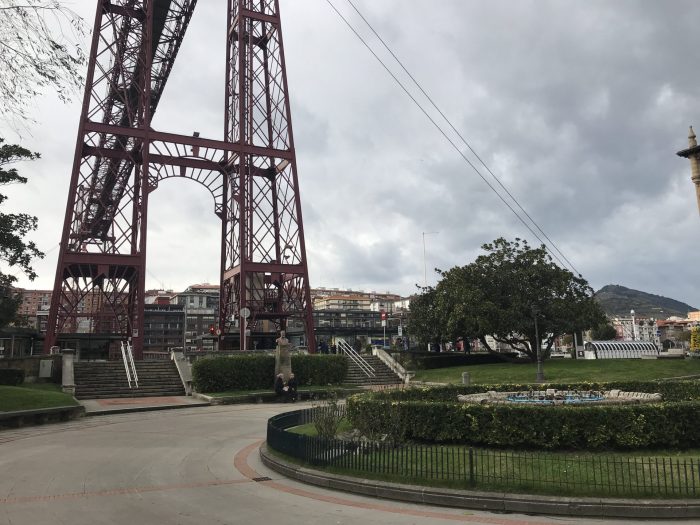 Getxo is one of the most affluent towns in all of Spain. The town is served by several metro stops, since it’s a fairly large area. Some of the main highlights of Getxo include the Puerto Viejo, Andra Mari Church, and La Galea Fort. Getxo also has a couple of beaches, but with rain coming in on a January day, I had no desire to visit them.

Instead, I walked around the Las Arenas neighborhood for a bit. It was quiet, aside from a fair that was going on. The local craft beer shop was closed for the holiday. I got on the metro at Areeta & headed back to Bilbao. This metro line stays above ground for much more of the journey. Since it follows the estuary for a bit, it passes through port areas. You can see some of the container ships that are able to pass under the Vizcaya Bridge thanks to its clever construction.

The Vizcaya Bridge is a stunning & unique construction. If you’re interested in engineering and history, or even if you’re just looking for a nice day trip from Bilbao, head to Portugalete & Getxo to check it out.