Bilbao, Spain’s reinvigoration in recent decades has also led to a small craft beer scene popping up. Here’s where to find the best craft beer in Bilbao, including beer bars, breweries, tap rooms, and bottle shops.

Tegobi is a cozy bar with low-slung ceilings, a fun vibe, & a fantastic selection of local beer. 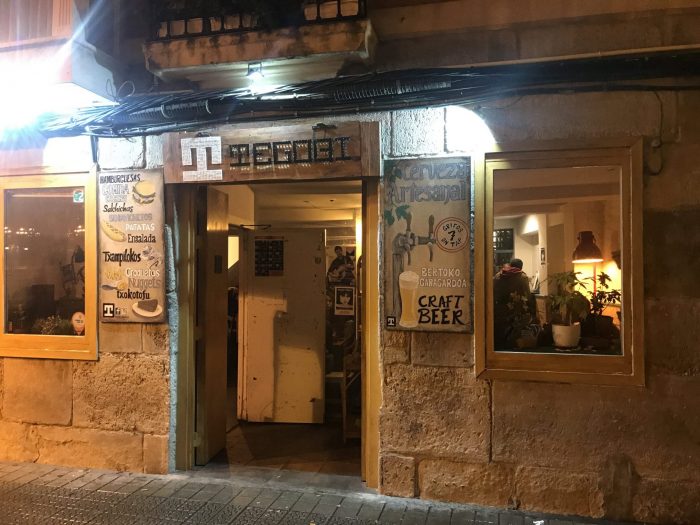 It’s a place that doesn’t just serve beer; they’re also acting as stewards of a larger craft beer scene. Tegobi does offer their own house beer, but they also support small new breweries through their selection of 7 taps and a nice local bottle list. Prices are intentionally kept reasonable in order to better reach potential customers who are accustomed to cheap macro lagers. They’ve also got a food menu with burgers & cheese plates.

The intimacy of the bar invites interaction. I had great conversations with the bartender and a fellow patron both before & after closing time, the latter giving me a couple of nice recommendations for craft beer in San Sebastian. 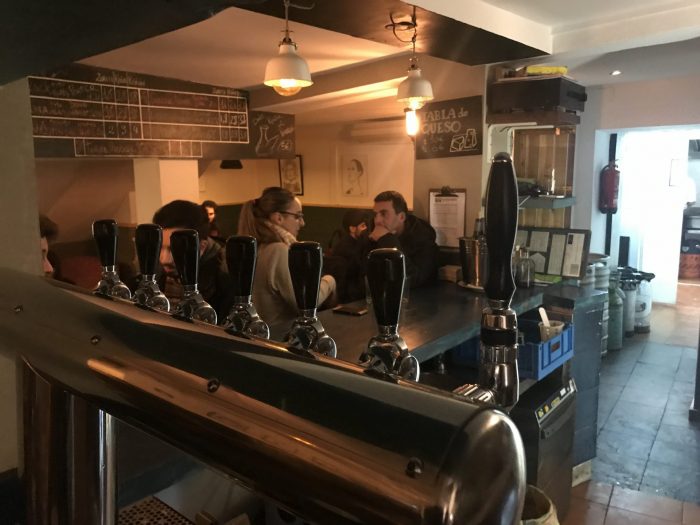 Tegobi’s music selection also could have been taken straight from my playlists, with the bartender playing Belle & Sebastian, Nada Surf, Wilco, The Flaming Lips, Modest Mouse, and other indie bands.

Whenever I’m traveling, it’s nice to feel at home in a bar, and Tegobi immediately filled that role.

Singular is more than just a craft beer bar. Unlike many beer bars, their full bar may be just as popular as the beer. But they do have 8 taps plus 100 or so bottles & cans to keep beer fans busy. 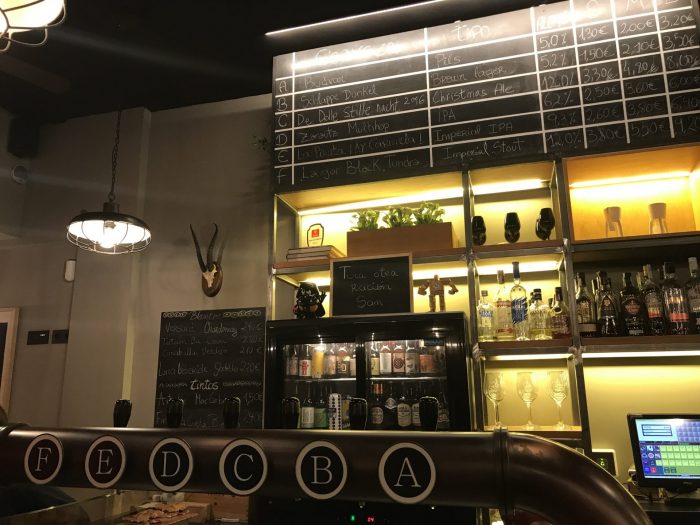 The outside patio is particularly popular with the clientele, which ranges across all ages, and inside, it’s a modern place that still feels cozy. 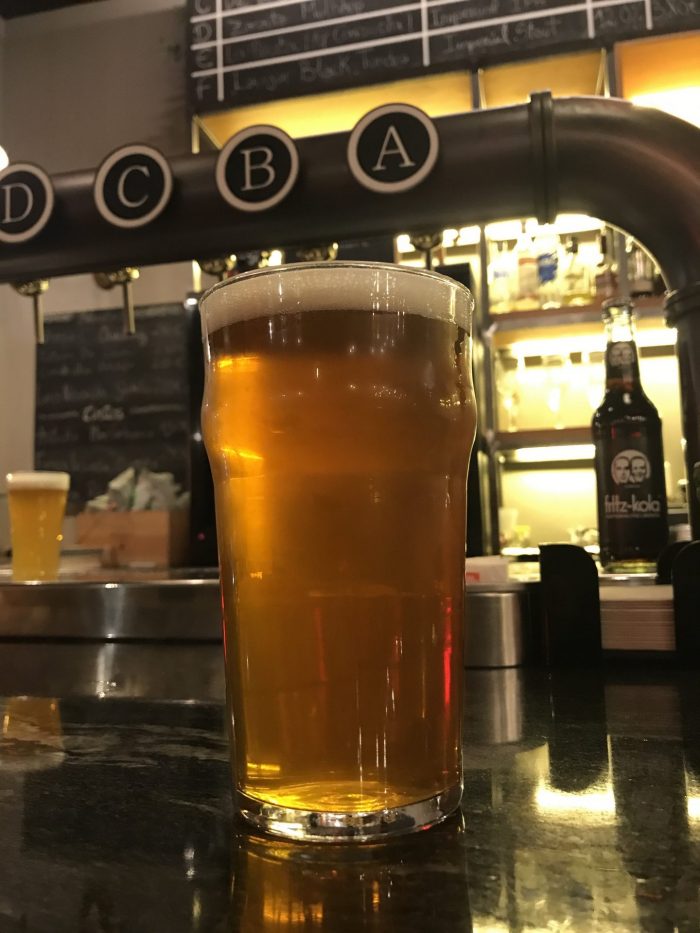 The beer selection at Penguin Bar is mostly imports, but they have a fantastic lineup across their 16 taps. There’s also a small, but well-curated bottle selection. Penguin Bar does have some local beer from smaller breweries too. 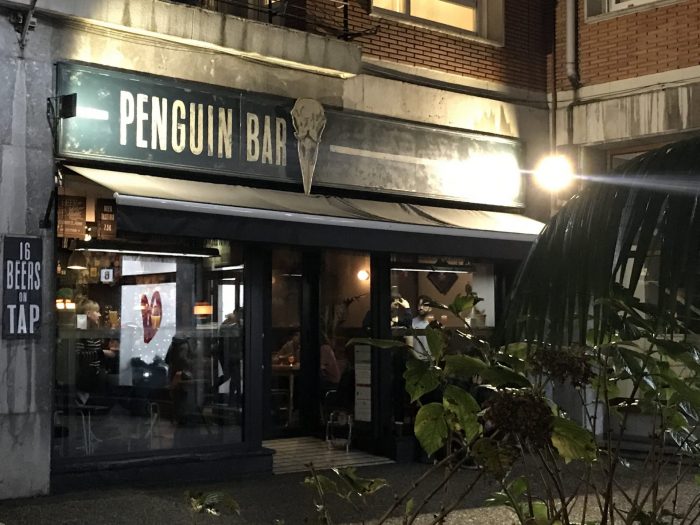 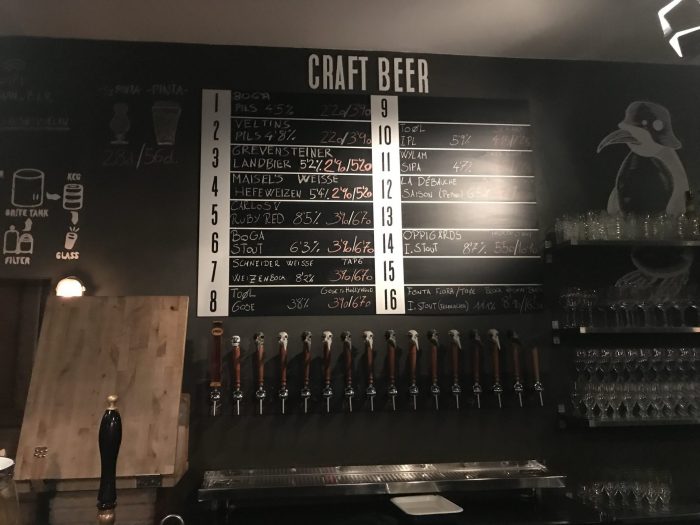 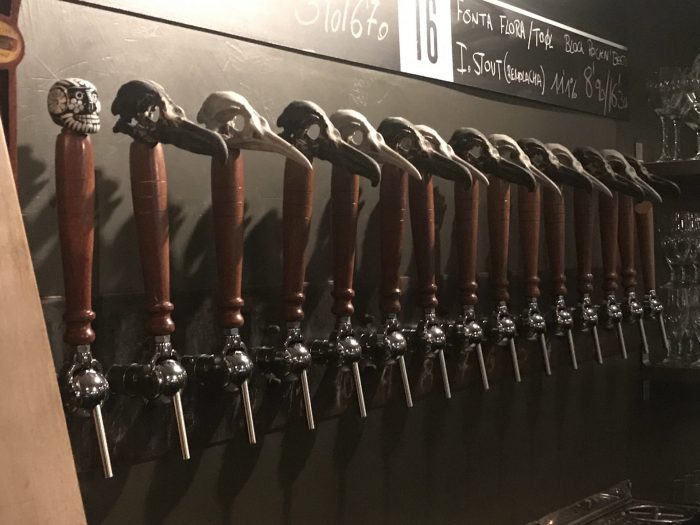 Those penguin skulls are so metal although sadly, the bar wasn’t playing metal when I visited.

Note that there are at least two bars in Bilbao named Bihotz. One of them is near Penguin Cafe. While that particular bar does have a lot of TVs and is a popular place for watching Athletic Bilbao, who play at the nearby San Mamés Stadium, the beer selection isn’t really craft though they do have decent pintxos.

The Bihotz that’s the best destination for craft beer lovers is Bihotz Cafe, just across the river from Casco Viejo. 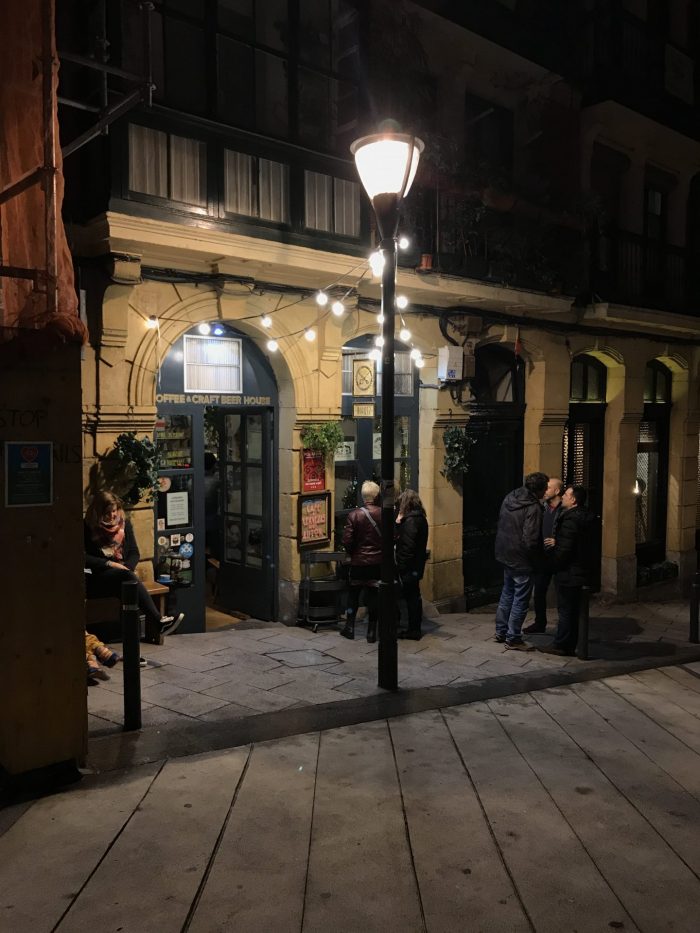 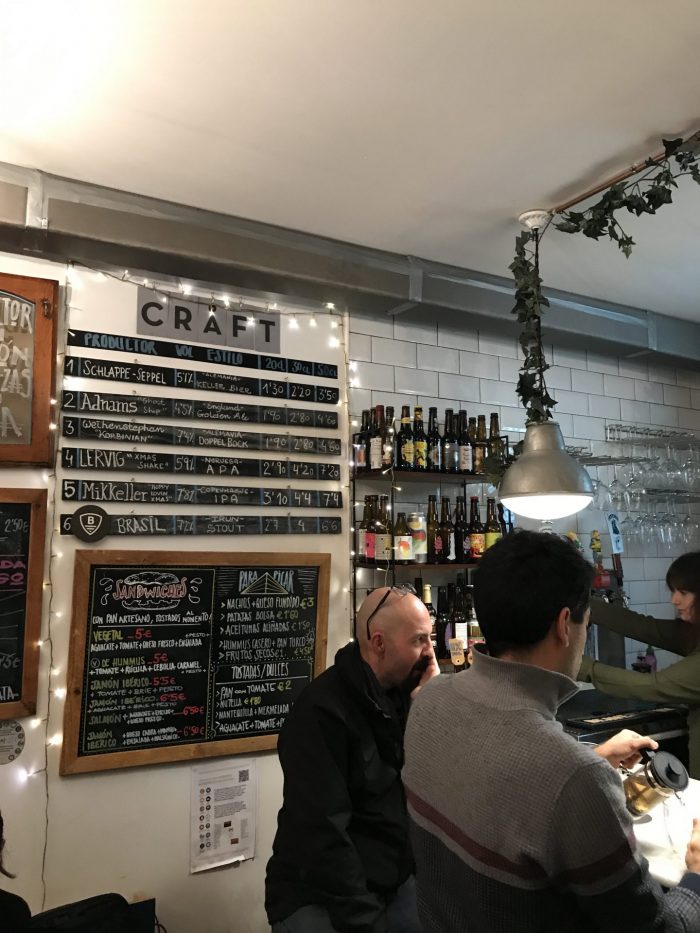 There are 6 taps of craft beer, but the quality bottle selection is where it’s at. There’s a nice variety from local Basque & other Spanish breweries, plus other great European breweries like Omnipollo, Mikkeller, Siren, and De Struise. 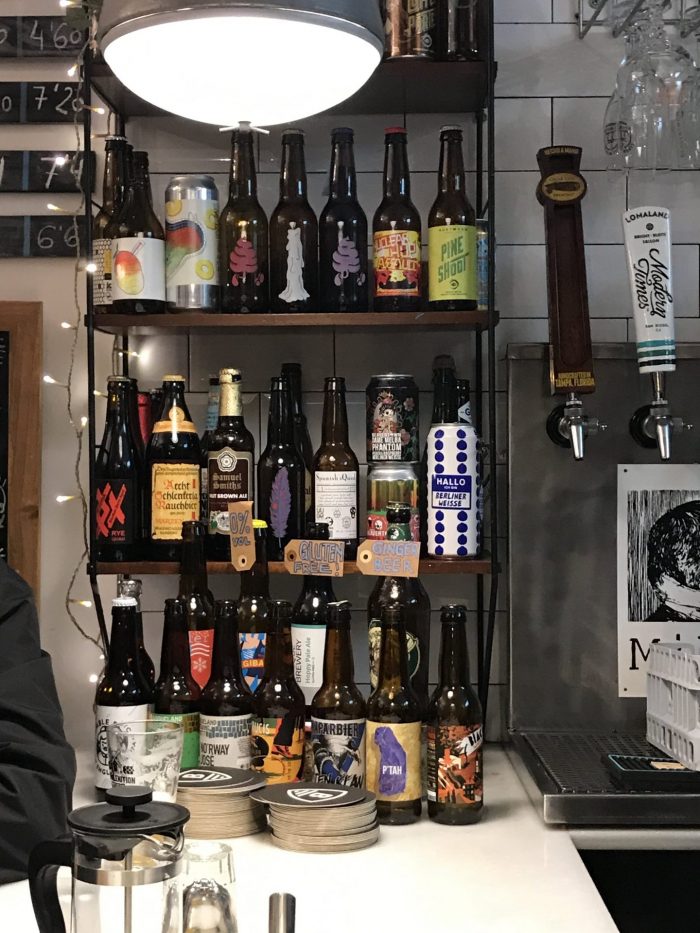 Other craft beer bars in Bilbao

In addition to these great bars above, there are a few other notable Bilbao craft beer bars.

Basquery is a restaurant that also brews their own beer. Irish pub Molly Malone has a small craft beer selection, plus it’s a lively place to watch a football match on their TVs. You also get a little piece of pizza with your beer. 15.000 Hops in Barakaldo has 10 taps from around Europe, with a focus on German & Basque beers. 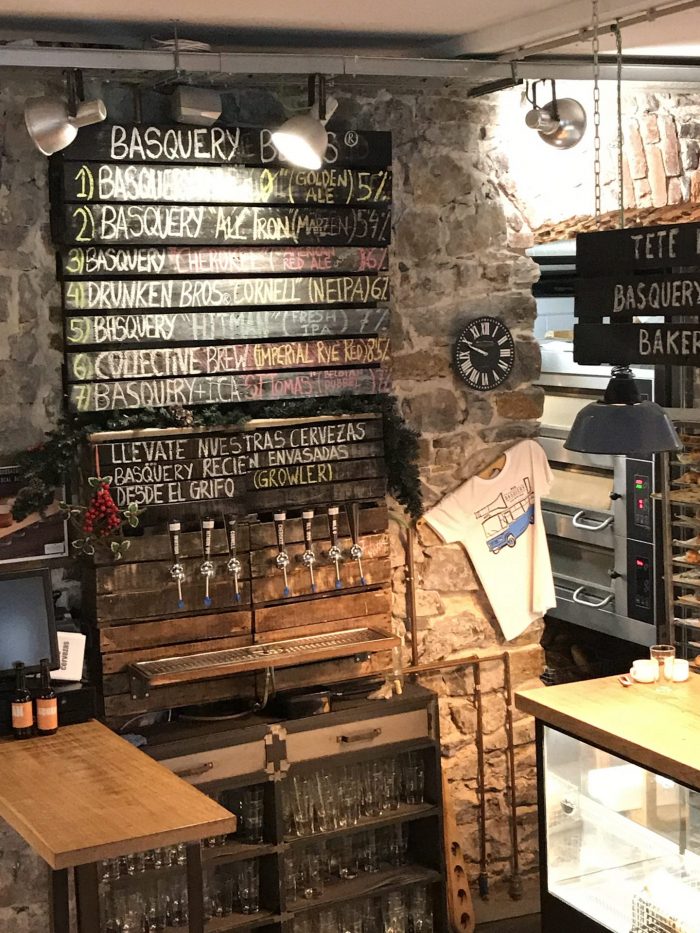 There are a few small breweries in Bilbao & the surrounding area.

Laugar Brewery’s beers can be found in many Bilbao beer bars. Their brewery is located just to the southwest of Bilbao in Gordexola. La Txika de la Cerveza is an artisanal beer brewed by Mar, a nomadic brewer. She delivers her beer around Bilbao by bike.

Basqueland is another major Basque brewery. It’s located near San Sebastián, but their beers are popular across the region & the rest of Spain.

If you’ve spotted any other great places for beer in Bilbao, let me know in the comments!

If you’re looking for a place to crash after drinking beer in Bilbao, check out these Bilbao hotels & AirBnbs.