Mountains surround Morioka, Japan. One of the most visted mountain areas is Towada-Hachimantai National Park, a national park split into two sections. The Hachimantai section is the closest to Morioka in Tohoku. These volcanic mountains are a nice escape from the city, with gorgeous scenery that changes with every season. A day trip to Morioka to Hachimantai is the perfect way to experience the beauty of this region.

How to get from Morioka to Hachimantai

There is also a city called Hachimantai, but this day trip focuses on Hachimantai National Park & the mountains. Mount Hachimantai is a little bit over an hour drive away from Morioka. If you don’t have access to a car, there is public transportation available. In addition to regular local bus service, there is also a seasonal tourist bus (F41) that goes from the central Morioka train & bus station to the Hachimantai Mountaintop Rest House. This round trip ticket (2600 yen) gives you a few hours to explore the Hachimantai National Park after about a 2 hour bus ride to reach the summit. 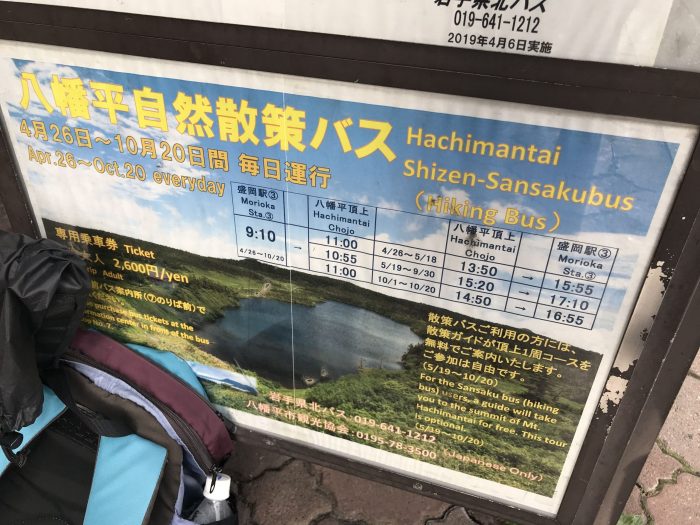 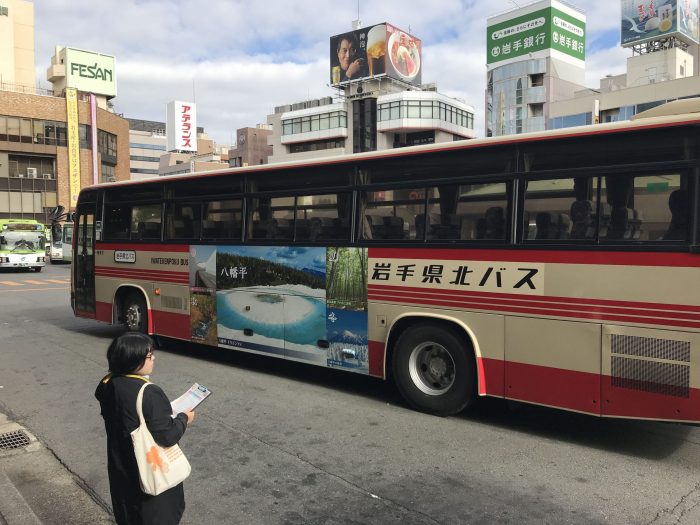 The drive from Morioka to Hachimantai is pretty. The road first passes Mount Iwate. In mid-October, the leaves were just starting to change colors at the lower altitudes.

About 50 minutes into the drive, the bus stopped at a visitor center/shopping area for about 10 min. It was here that the tour guide (Japanese only) got on the bus.

Heading further up into the hills, the bus passed mountainside hotels & onsens, stopping to pick up or drop off passengers along the way.

As we went higher in the mountains on the clear autumn morning, there were more and more yellows, oranges, and reds.

The final stretch of the road toward the Hachimantai Mountaintop Rest House gets above the treeline. These mountains are volcanic, with thermal vents dotting the landscape. Less attractive is the sulfuric stench accompanying these hot springs. 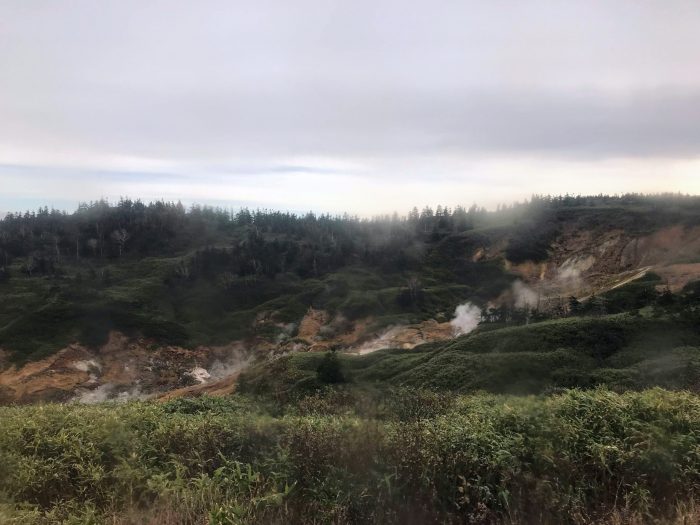 As the road reaches its summit, it approaches the Hachimantai Mountaintop Rest House. This bustling center with a cafe, shop, & overlook is the drop-off point for the tourist bus. We arrived at 11:20am & had 3.5 hours to explore the area.

While many of the people on the bus opted for the guided tour of Mount Hachimantai in Japanese, I opted for lunch. The small cafe serves udon, curry, & stew, all with quick service.

Belly full, I headed upstairs. The upper level has an observatory with panoramic views of Towada-Hachimantai National Park, though those mostly are of the parking lot, which was in the process of being refurbished before the winter hit. 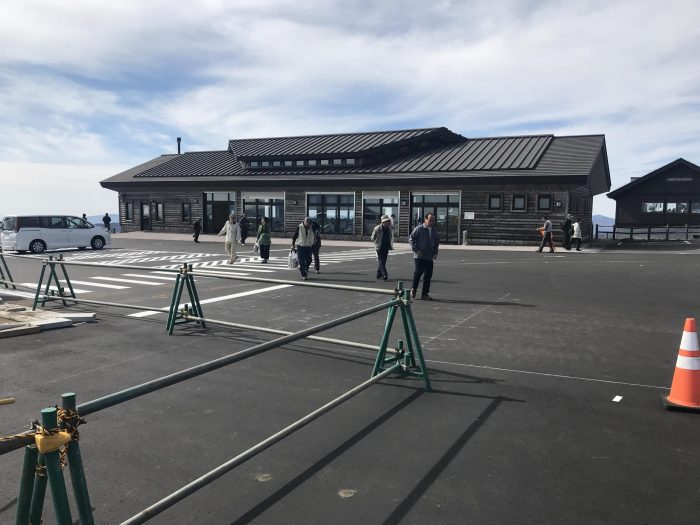 The best unobscured views are from the edges of the parking lots or the smaller outdoor platform. The day had turned a bit hazy, with clouds rolling over Mount Iwate in the distance. 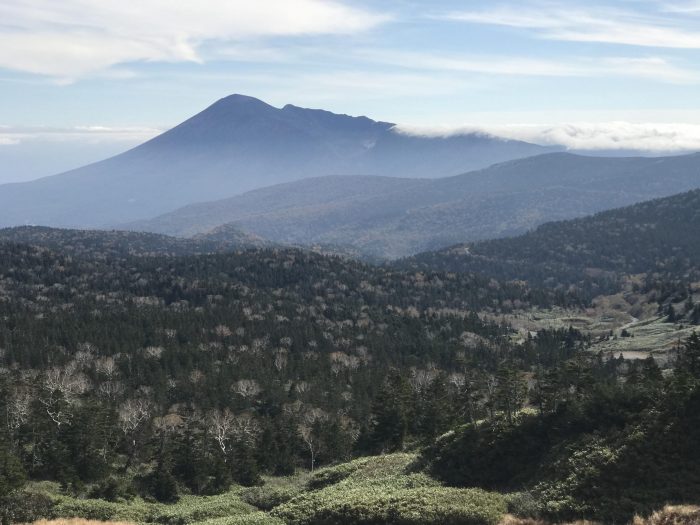 Hachimantai Mountaintop Rest House was high enough that between the combination of the tree line, the abundance of pine trees at the higher reaches below, and the bare branches of the other trees, the autumn colors had passed. The views are still gorgeous, whatever the season.

When it first opens in the springtime following the long winter, the Hachimantai Aspite Line turns into a snowy canyon corridor, with tall snowbanks walling off the roadway.  Spring & summer bring flowers, wild grapes, and hiking.

Hachimantai Mountaintop Rest House isn’t actually quite at the top of Mount Hachimantai. The summit is a little bit of a walk from the rest house, but the hike is pleasant & much of the way is paved. There are a few different options of paths to take. The most direct trail to the summit takes about 20 minutes. There are also a couple of nice lake loops to add, which I did since I had plenty of time. 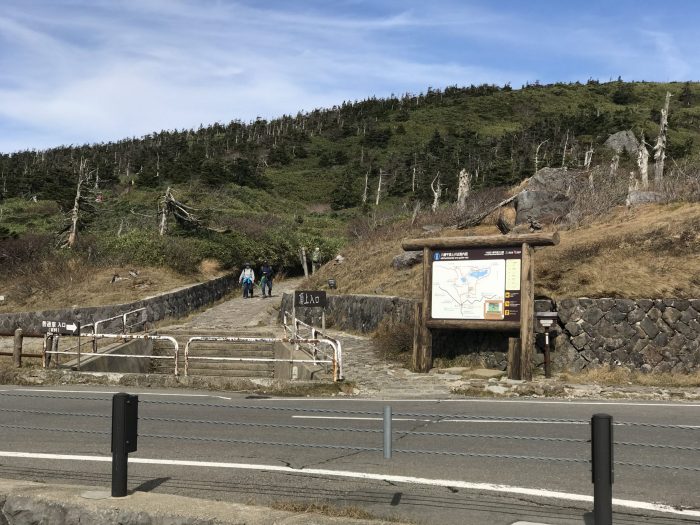 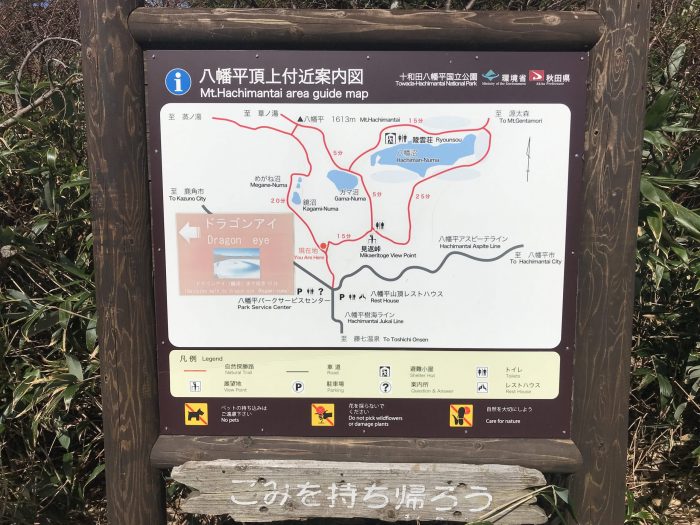 The first stop along the trail to the Mount Hachimantai summit is known as the Dragon’s Eye. At the right time of year as the area thaws, the frozen surface & melted parts resemble the eye of a dragon. The official name of this crater lake is Kagami-numa. Kagami means “mirror” in Japanese. It’s an appropriate name. 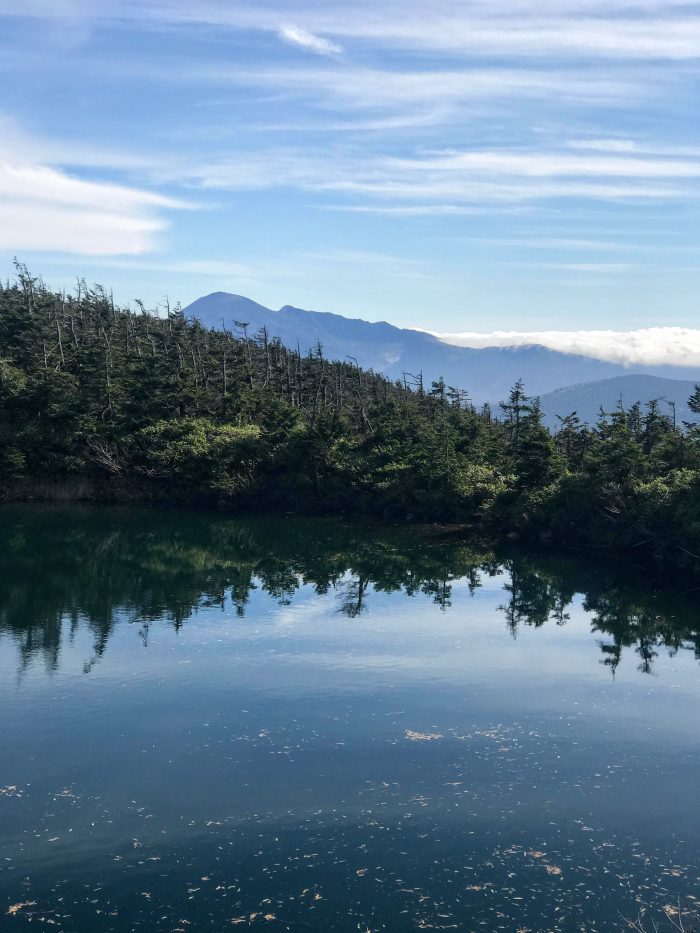 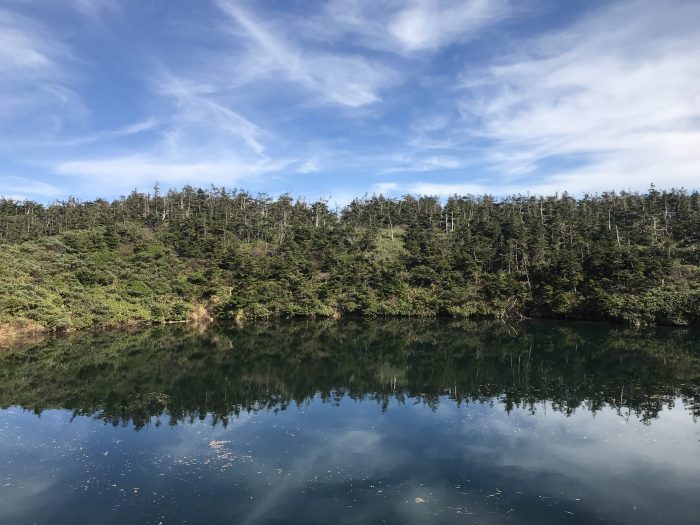 Just past this lake is another set of lakes called Megane-numa. Megane means “glasses” in Japanese, so the pairing of the lenses of two lakes also makes sense.

Another landmark has been named “Mysterious depression,” which is either another well-earned name, or a mapmaker’s cry for help. 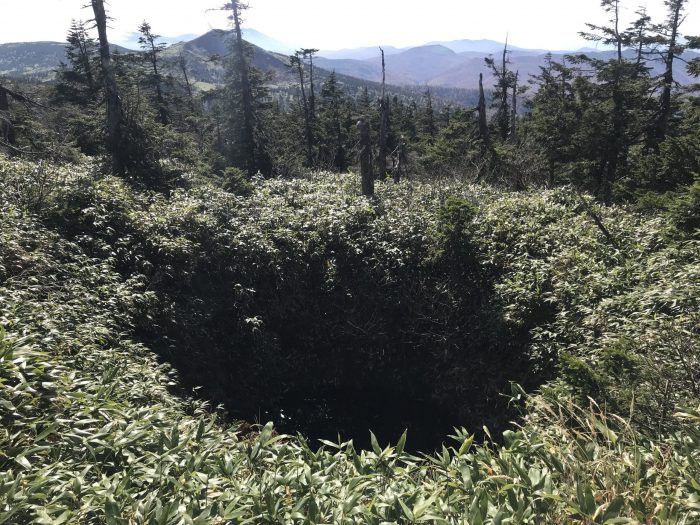 Some of the hikers were wearing bells, which is common to ward off bears in Japan. Since the trail was busy & enough people had the bells, it seemed fine to let everyone else do the ringing to announce themselves as dinner.

Since Mount Hachimantai is so flat at the top, a viewing platform has been built at the summit. The mountain has an elevation of 1,613 meters (5,292 feet). From the platform, there are stunning views, especially to the north & east toward Aomori. 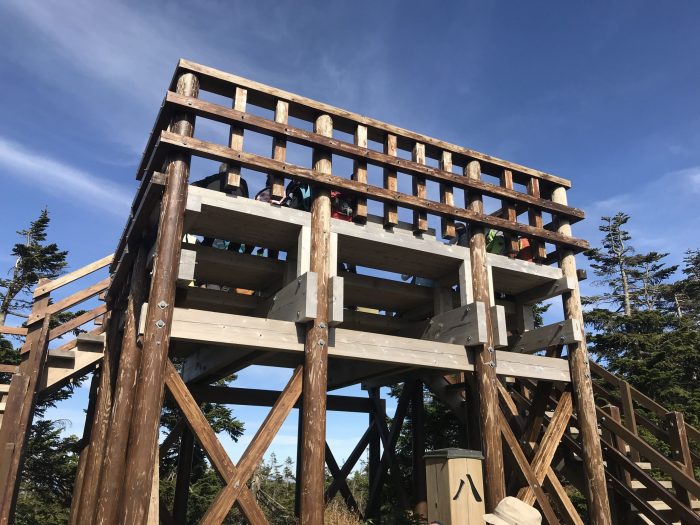 Thanks the flat mountaintop being less exposed, there were actually more trees in this area than at the rest house. 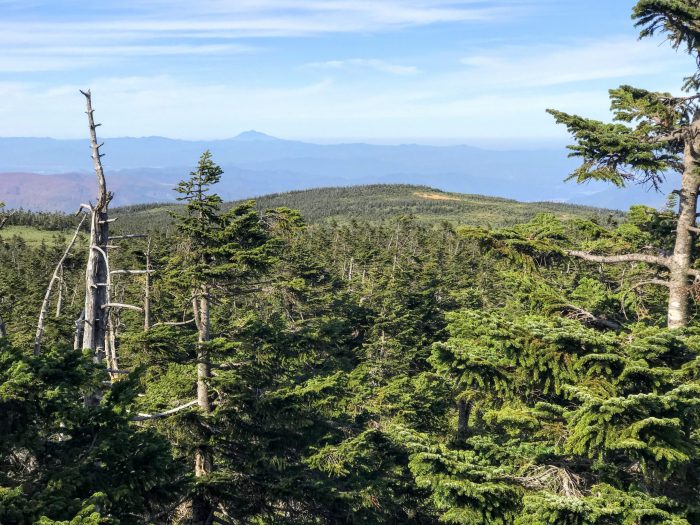 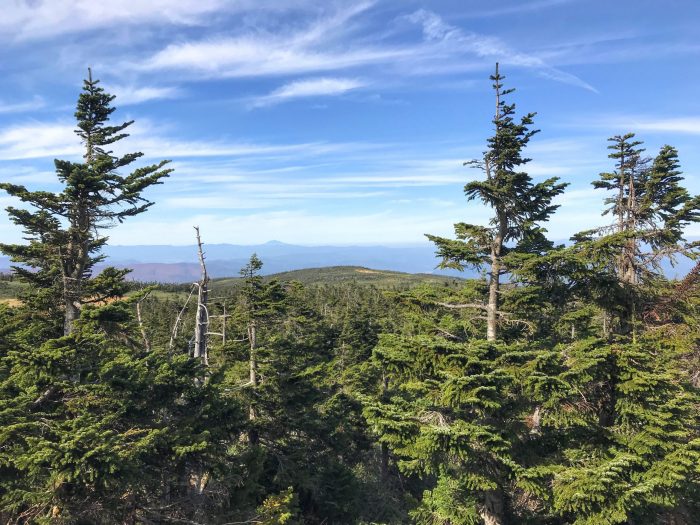 From the Mount Hachimantai summit, the path continues along a fairly flat area until it reaches another smaller lake, Gama-numa. There is another viewing platform here that looks over this lake toward Mount Iwate. 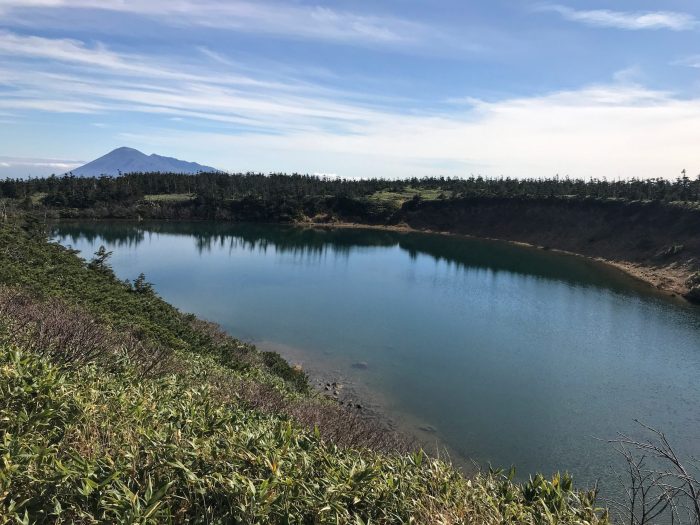 The largest lake in the area, Hachiman-numa, is just to the east. 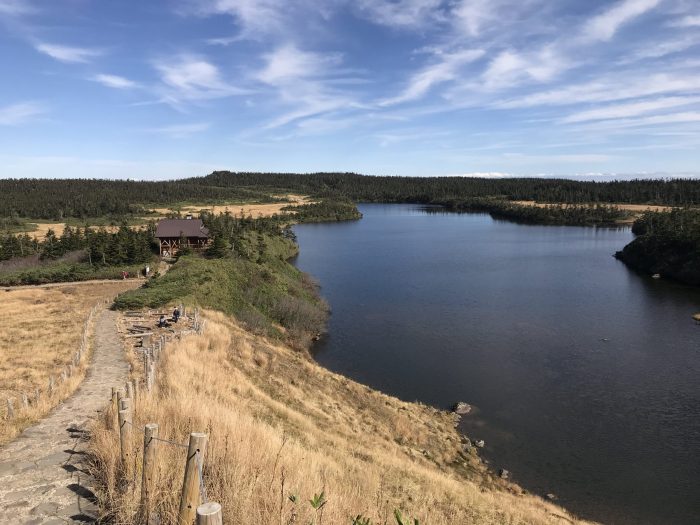 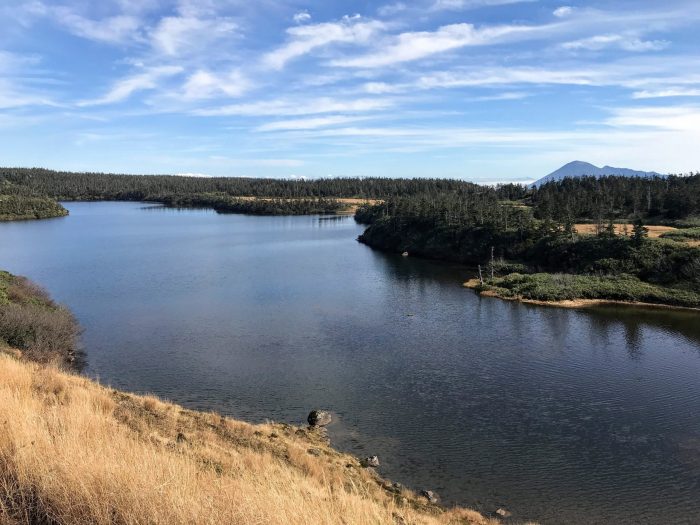 If you’re short on time, you can walk between the two lakes & head back to the Mountaintop Rest House, otherwise, you can continue around Hachiman-numa, past the lodge & over a boardwalk across wetlands. 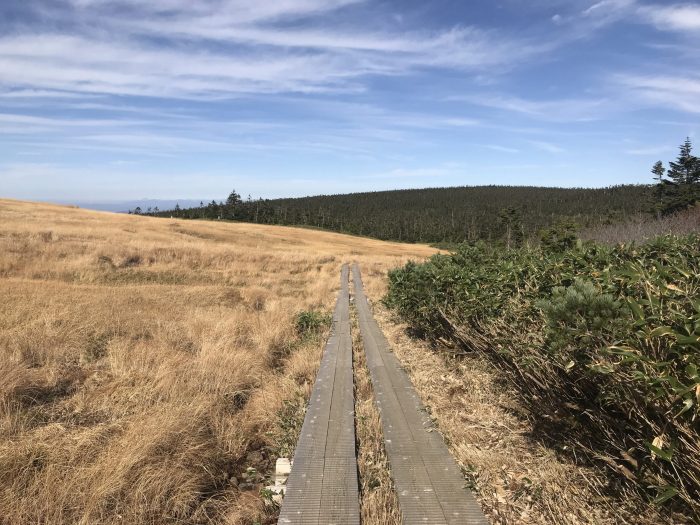 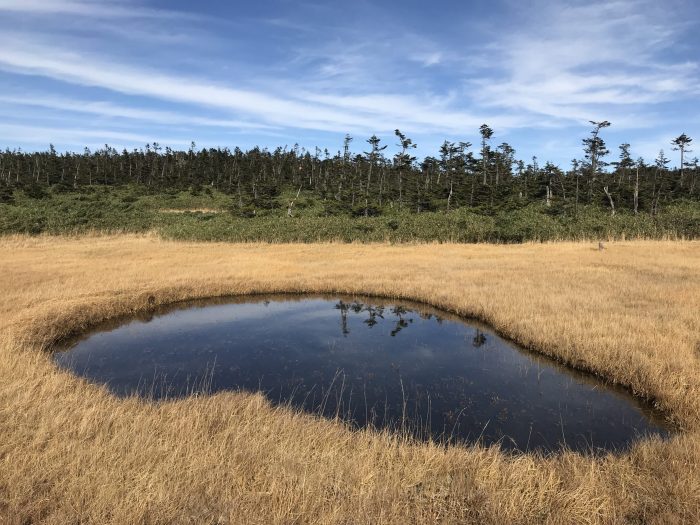 These paths connect to a well-marked set of longer trails through Towada-Hachimantai National Park (website), but they also loop back toward the Hachimantai Aspite Line & the parking lots. At yet another overlook, there are signs pointing out the various mountain peaks of the region, including some as far away as Lake Tazawa & beyond. 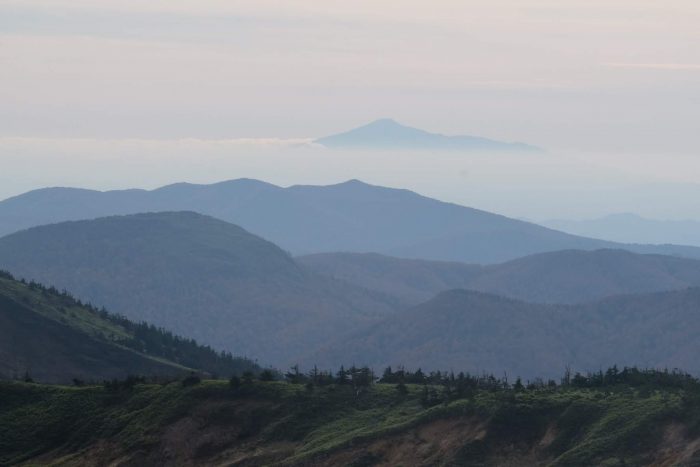 I arrived back at the Hachimantai Mountaintop Rest House almost an hour before the departure of the tourist bus back to Morioka. I first headed to the tourist information room on the 2nd floor. As I entered, a couple of guys approached me & asked if I wanted to do a survey. With limited time left on the mountain, at first I said I couldn’t, but then I asked how long it would take. They said it would be just a few minutes, so I did it. I realized that as a travel blogger, I should help provide feedback like this to destinations whenever I can. Plus, they gave me a few nice postcards as a thank you. Now you can see what the Dragon’s Eye looks like as the winter thaw begins. 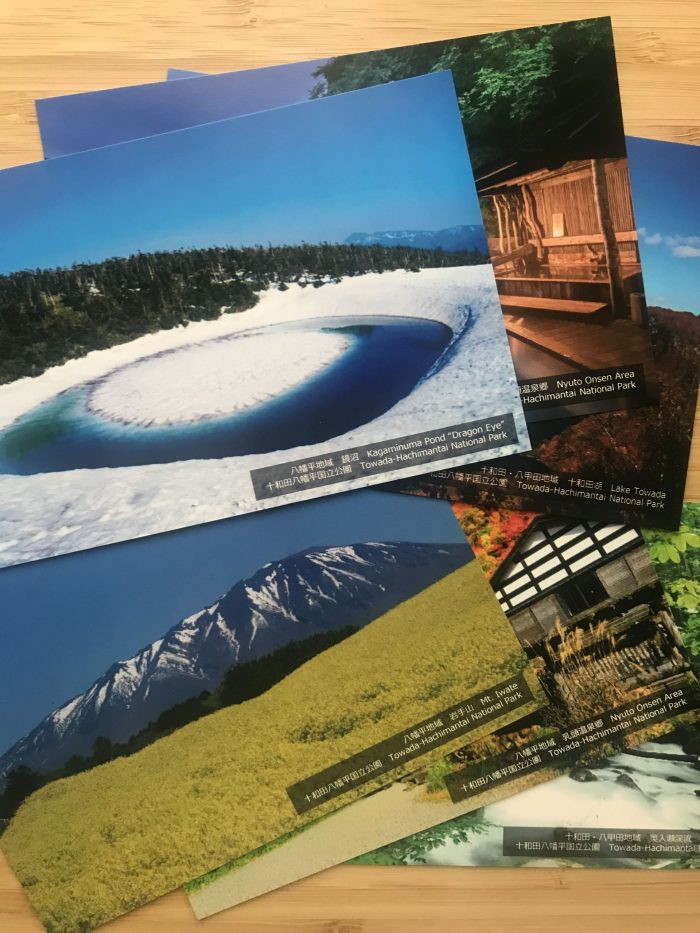 Then I headed down to the shop. The shop had an array of local products, including many made from local grapes. Thirsty from a couple of hours of hiking, I bought a local grape juice. I also bought a Asahi Happoshu low malt beer, since I’d never had it before, & the beer vending machine didn’t have any local Morioka craft beer. 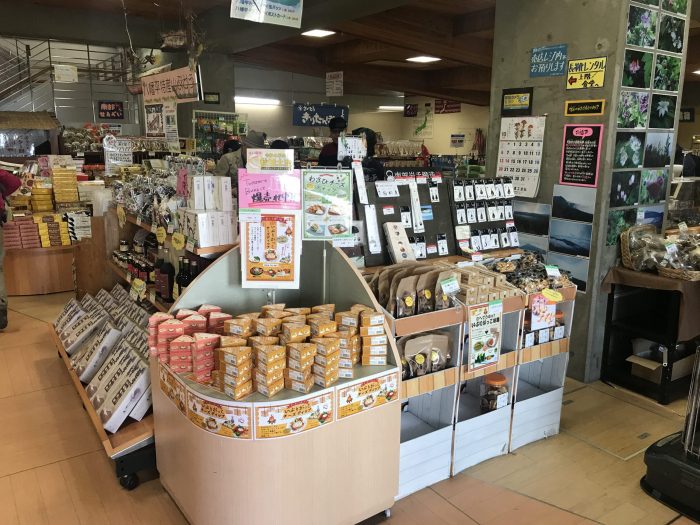 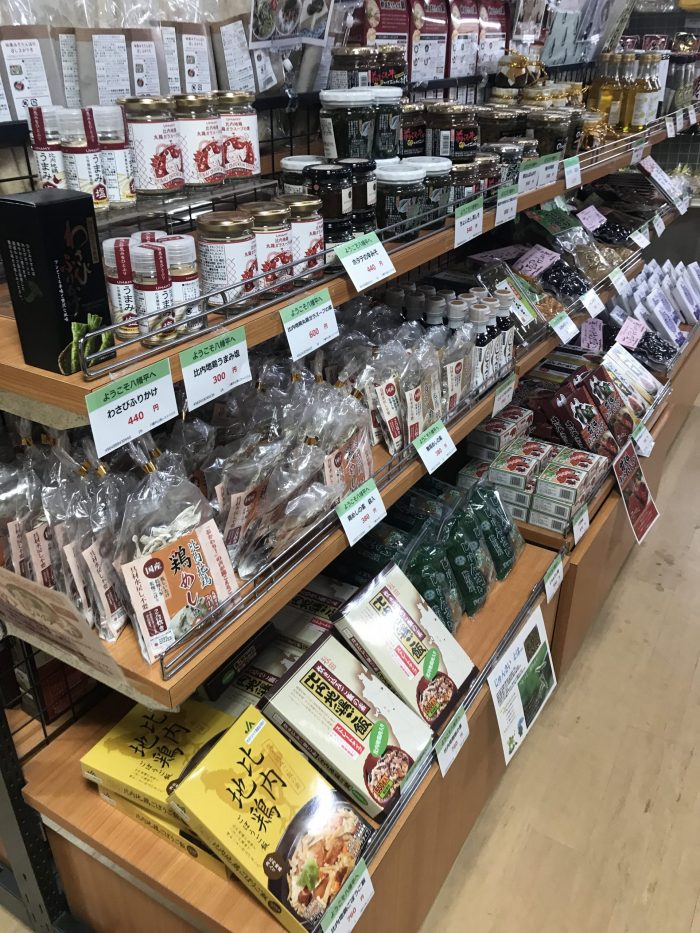 As I sat outside on the edge of the parking lot, looking out over the hazy mountains below while drinking my beer, I chatted with a nice couple from Kyoto who had lived in Seattle for 9 years. They were visiting the area as a way of remembering one of their fathers, who was from Hachimantai & had passed away a few years before. We bonded over that shared loss, as well as talk of American politics.

Bus back to Morioka & final thoughts

The day trip from Morioka to Hachimantai on the public tourist bus is a nice outing. The ride is pleasant both ways, and the three-and-a-half hours allotted at the summit is plenty of time to see & do everything. I was able to have lunch, take in the views, and walk & hike about 4 miles around the area.

The bus followed the same route back, passing the changing leaves & waterfalls, then also stopping for 10 minutes at the same shops near the Towada-Hachimantai National Park entrance.

After arriving back at the Morioka train station, I headed for jajamen, one of the three Great Noodles of Morioka. It was the perfect meal after a long day of hiking & the outdoors. If you’re in Morioka, I highly recommend taking a day trip to Towada-Hachimantai National Park any time of year.

Interested in tours near Morioka & Hachimantai? Here are some options:

Other activities & places to stay near Hachimantai & Morioka: 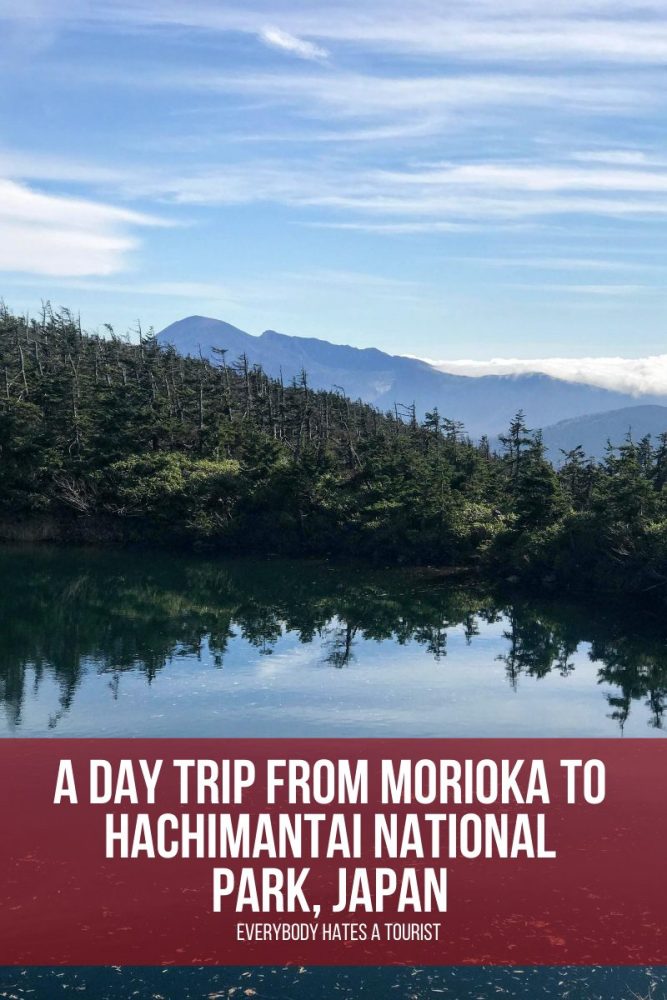