Long Island City has historically been known as an industrial area. Located just across the East River from Midtown Manhattan, it is now slowly evolving into more of a residential neighborhood, particularly for artists & people who want an easy commute. Several subway lines pass through Long Island City from Manhattan & Brooklyn, making it the easiest place in Queens to get to from both. The former industrial warehouses are a boon to craft brewers. Space here is plentiful & affordable (by New York City standards), making Long Island City as bustling hub for the New York City craft beer scene. I visited NYC after winning a trip to the U.S. Open. While I was there, I was able to visit several breweries in Long Island City. Here are my favorite Long Island City craft beer bars.

Amid heavy competition, Fifth Hammer Brewing Company was my favorite brewery in Long Island City. However, depending on what style of beers you like & what sort of bar vibe you are looking for, there’s no wrong answer. Long Island City truly has a wealth of great beer bars & breweries. 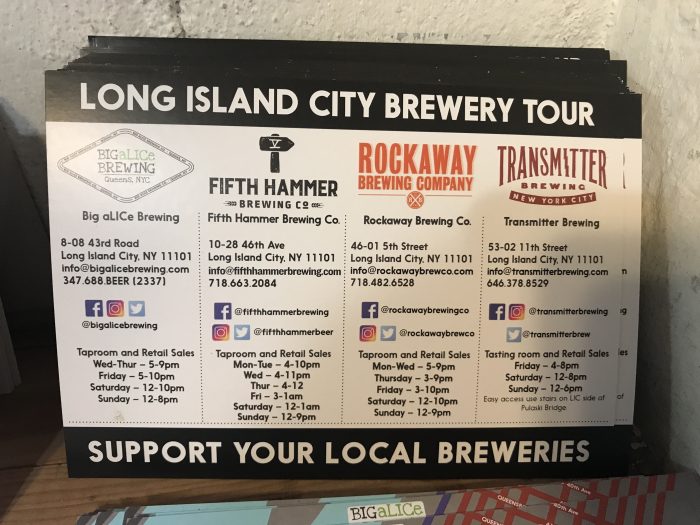 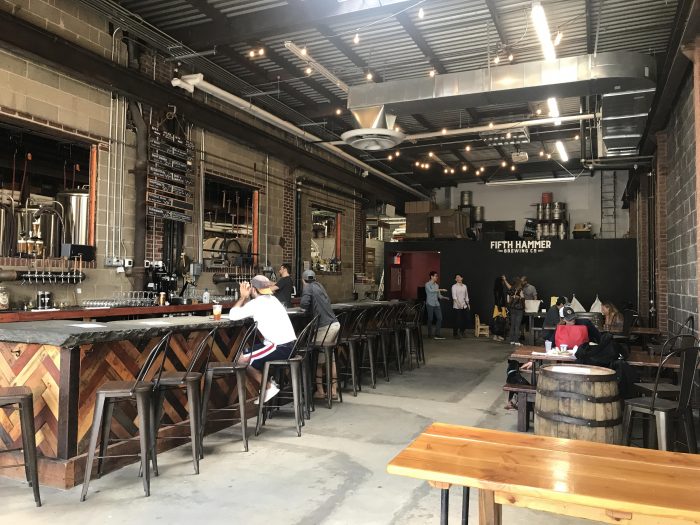 When I saw Fifth Hammer’s tap list (10 taps), I knew I was going to be happy. Their beer sits more on the adventurous side, incorporating unique ingredients that you might not have had in beer before. For example, one sour I had was called Poglodyte and was brewed with inspiration from Hawaii’s POG (Passion fruit-Orange-Guava) juice. And yes, that’s where the brief 90’s fad comes from. Another was a pineapple sour. I’m not generally a sour fan, but the two I had at Fifth Hammer might have me changing my mind. 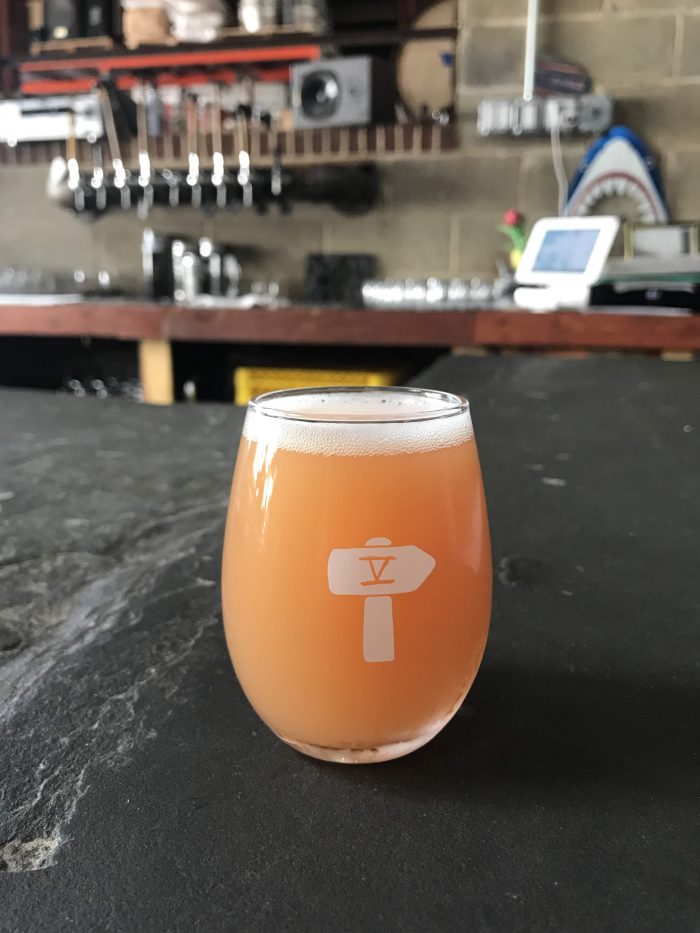 In addition to the great beer, Fifth Hammer had the perfect atmosphere. It’s a spacious place, with air filled with music that all could have come directly from my Spotify playlists – Pulp, Blur, The Stone Roses, The Verve, Ash, James, and other great British music from the 80s & 90s. The brewery only opened in 2017, but it has rapidly become a local favorite. It will be exciting to see what they have lined up next.

Despite what the name suggests, Rockaway Brewing Company does not brew beer in Rockaway. The brewery did develop as homebrew in the backyards of Far Rockaway, but nowadays their home is in Long Island City.

Rockaway Brewing Company is easy to spot. Just look for the pretty painted walls at the corner of 5th Street & 46th Avenue. 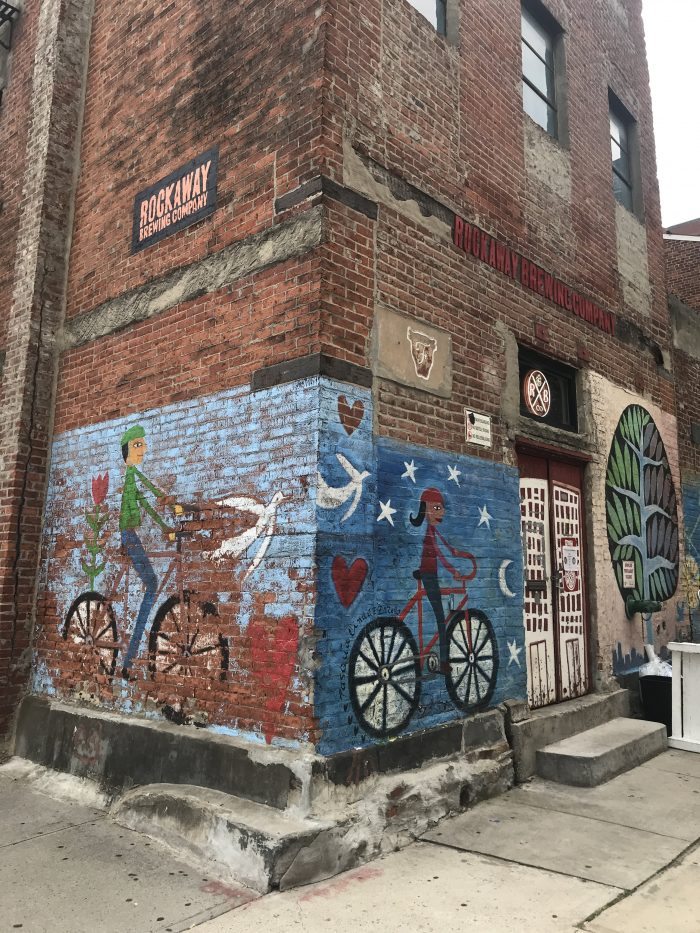 Inside, you’ll find what somehow feels like a corner store. There’s a bar on one side with 8 taps, doing flights & smaller-sized pours. 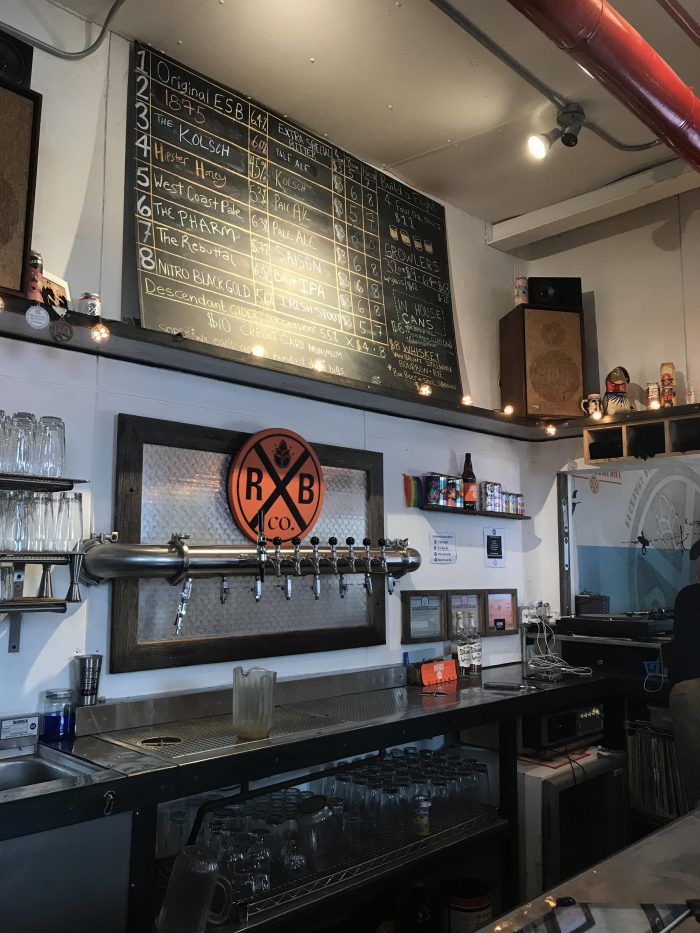 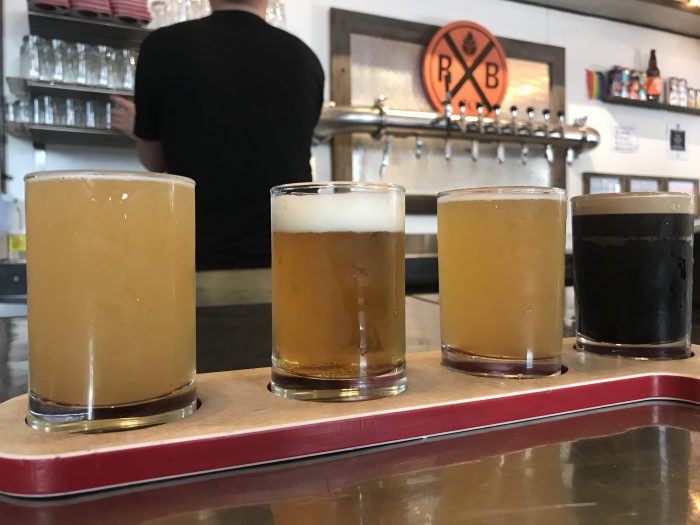 The bar doesn’t serve food of its own, but other local spots do pop-ups. When I visited, there was a pop-up table from Don Ceviche in the corner. 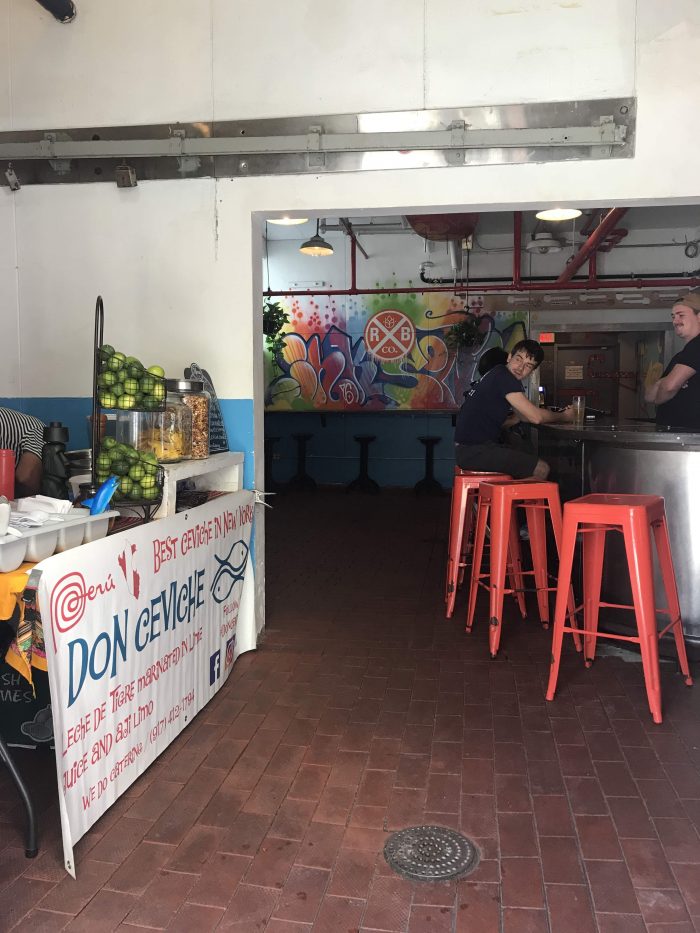 There was also a cat providing security. 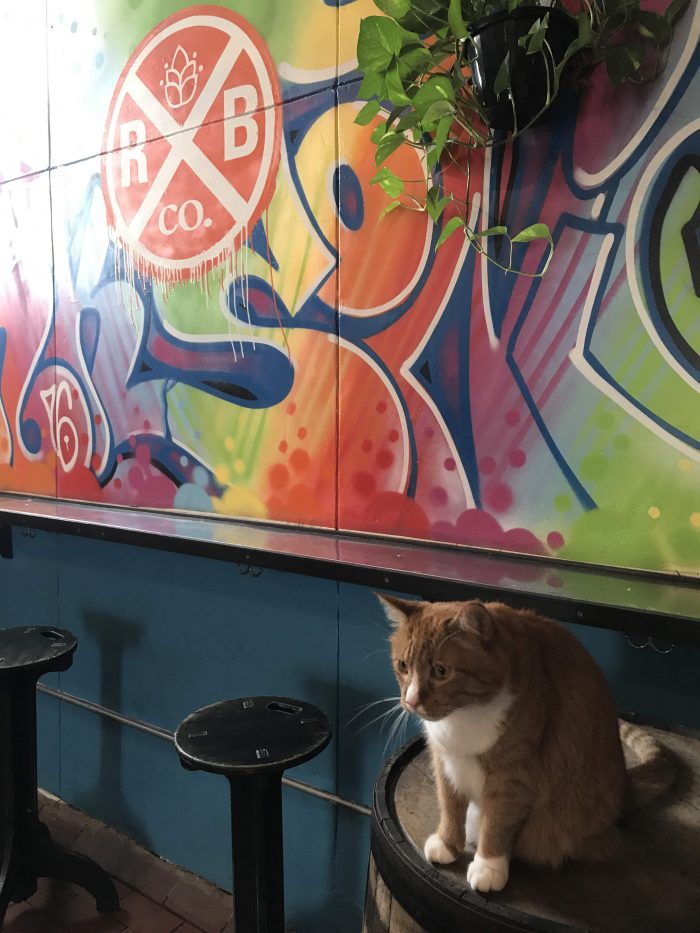 And if you’re looking for Rockaway Brewing Company in Rockaway, have no fear. The guys returned home in 2016, opening a taproom near the beach.

Big aLICe Brewing makes the most of their space. Upon entering, there’s a small bar with a couple of seats, and a small standing area. Look above it, and you’ll see quite the beer list. When I visited, there were 13 different beers available for flights, plus a few more specialty barrel aged creations as well. 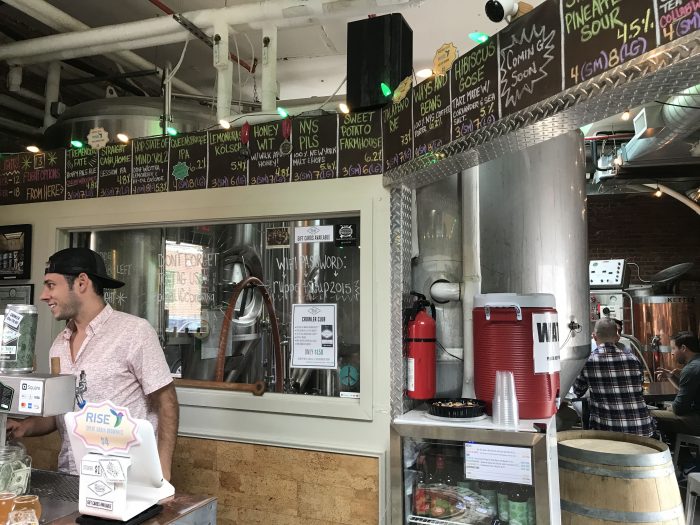 Head back into the brewery, and tucked amongst the equipment, you’ll find a few tables & barrels to sit at. 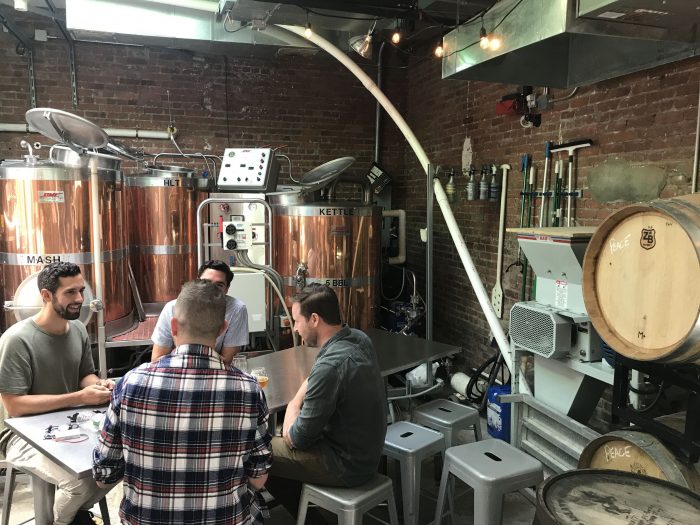 Even with this additional seating, there are still more unique beers than seats. Cozy up with everyone, and try something interesting. And interesting is what Big aLICe does well. The brewery, which has been in operation since 2013, focuses on using local New York ingredients. 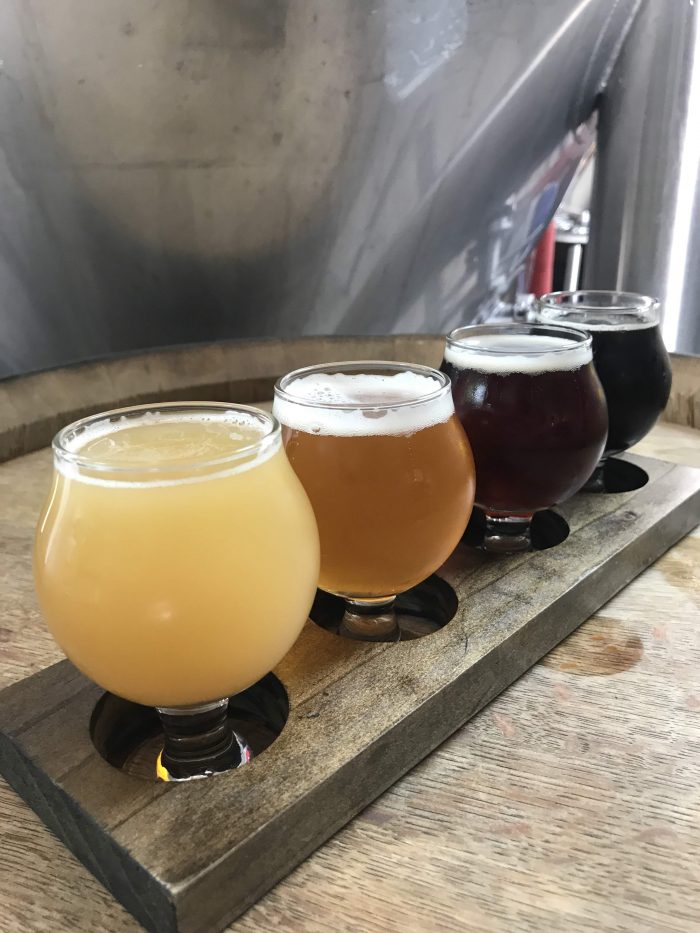 My favorite beer I had there was a jalapeño rye. Rye beers are often difficult enough to find, but the addition of jalapeño made for a delicious combination. 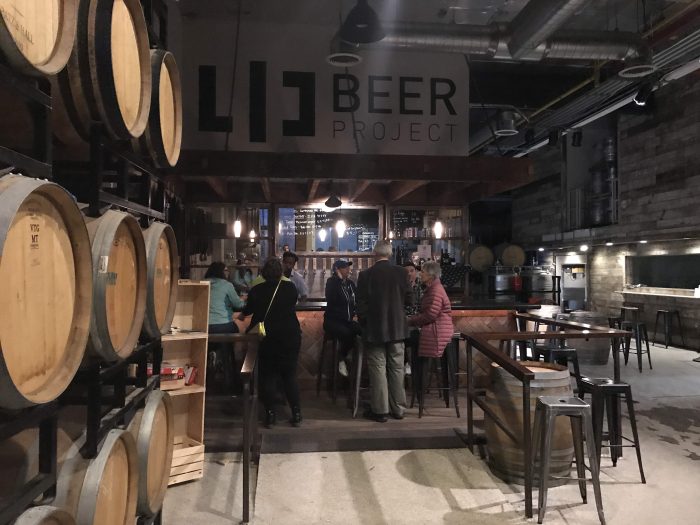 Unfortunately, when I visited nothing on tap was barrel aged at the moment (just bad timing on my part, more were scheduled to be tapped in the next week or two), but there was still good beer available including several hazy IPAs. There are a total of 12 taps on site, but their beer is also available at Citi Field to help you deal with watching the Mets. 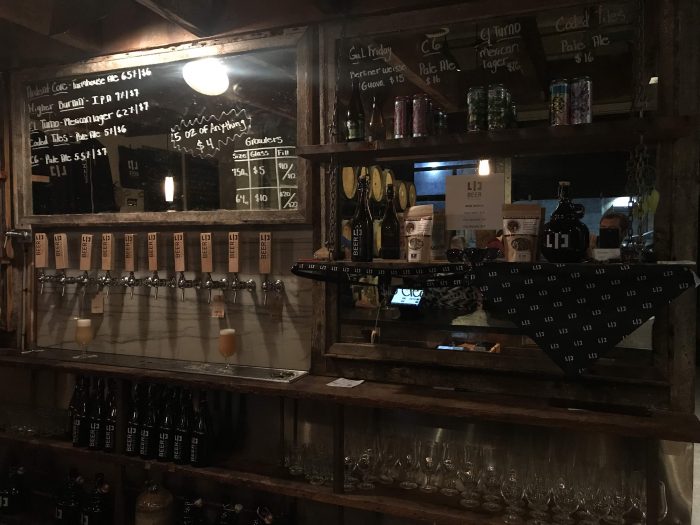 I also enjoyed the music. You can’t go wrong with David Bowie, Echo & The Bunnymen, & The Smiths.

Alewife has been operating in Long Island City since 2011, a few years before the recent brewery boom. The bar has 28 taps, many of which are devoted to local beer.. Recently, they started brewing their own beer as well. 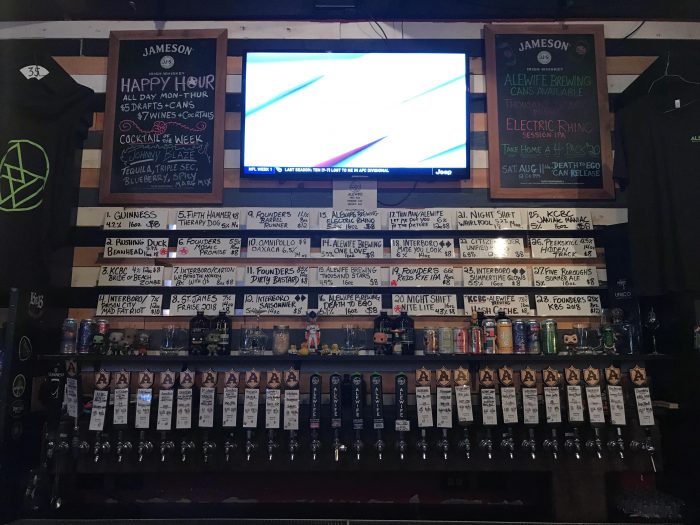 Throughout the week, Alewife hosts events, including tap takeovers, stand-up comedy, and trivia nights. On weekends, it’s a popular spot to watch sports on the many TVs. The bar also does a great brunch. Alewife feels very much like a neighborhood bar, which is nice.

Sunday Funday, better than a Monday. Getting ready to head to the U.S. Open Final, but first, time for brunch & beer at Alewife

Update: In May 2019, Transmitter Brewing moved from Long Island City to the Brooklyn Navy Yard, but for now I’ll leave this review of the brewery here.

Transmitter Brewing has one of the best slogans I’ve seen for a brewery: Always well received. And well received it is. 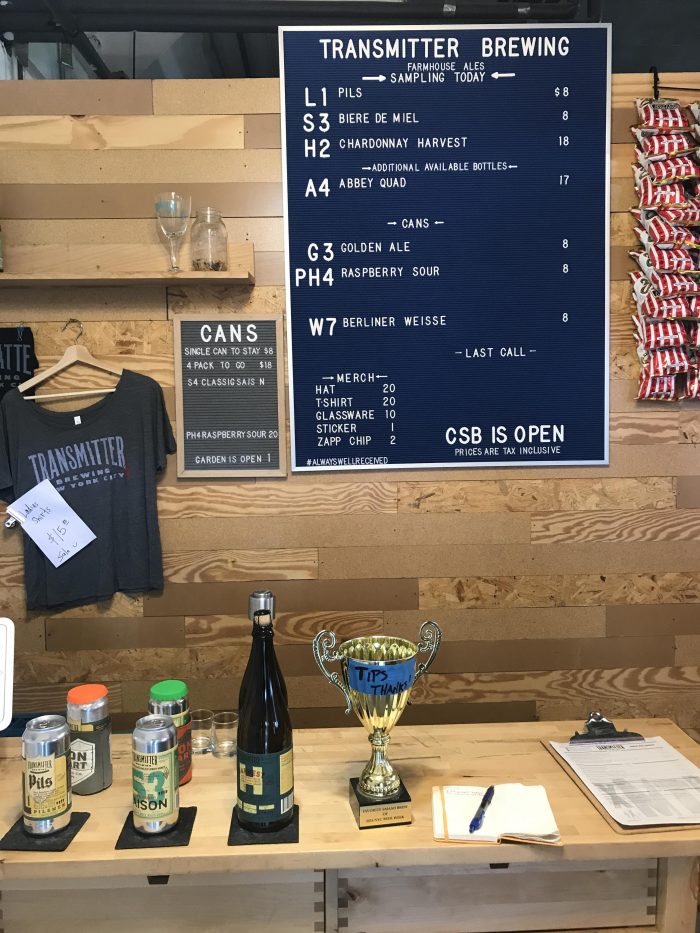 The brewery specializes in farmhouse beers & barrel-aged sours, though you can usually find a few other styles there as well. It’s a smaller operation, producing cans & bottles for in-house consumption & for taking home. The beer is brewed in small batches, with careful consideration of ingredients. You can sample a few of the available beers before deciding which one you want to purchase. 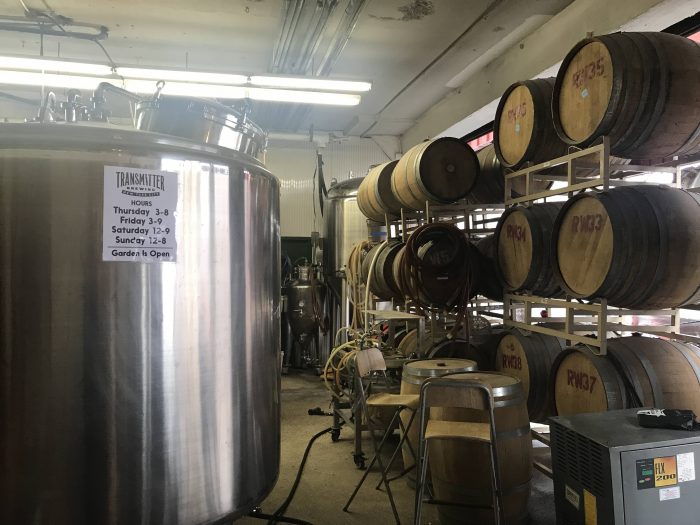 In addition to these beer bars & breweries, there are a few other places for a good pint in Long Island City. Jackson’s Eatery & Bar doesn’t have a huge selection, but their handful of taps are all local, plus they have a fantastic brunch. Bierocracy is a beer hall that focuses on German beers, though they do have a solid selection of other beer as well. 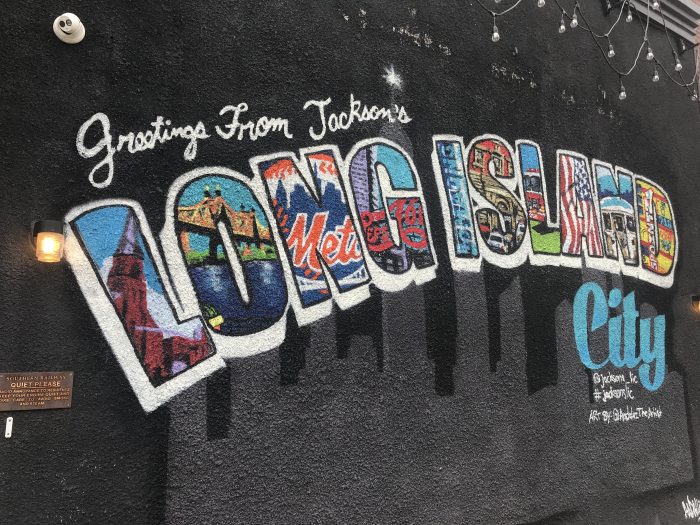 Given how many new openings of breweries & craft beer bars Long Island City has see in the past few years, there will undoubtedly be many more popping up soon. Have you been to other great beer spots in Long Island City? Let me know in the comments! 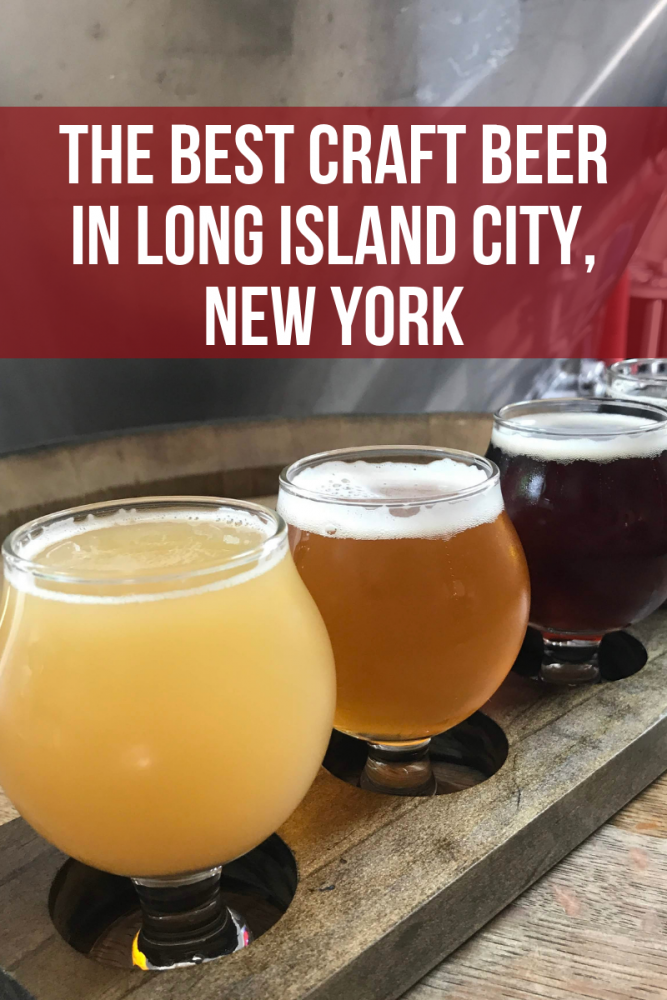