I usually opt to explore on my own rather than taking organized tours, but in this case I knew that local experts would have more knowledge of the area and the films, plus if I had to drive myself anywhere, I’d end up driving on the wrong side of the road and forcing someone into the lake. So taking a tour it was. There are tons of different Lord of the Rings Tours in Queenstown that all have great reviews

. You can see more Queenstown Lord of the Rings tours below.

One of the women at the tourist information center called a tour company, Pure Glenorchy (website), and I was just in luck: there was one spot available on the 1:30 Lord of the Rings tour around the Glenorchy area. I paid directly through the information center, then went back to my hotel to do a bit of work until it was time for the tour.

You can either join the tour across the street from the tourist info center in Queenstown, or you can be picked up at your hotel. I was the first one there, so I got the front passenger seat. 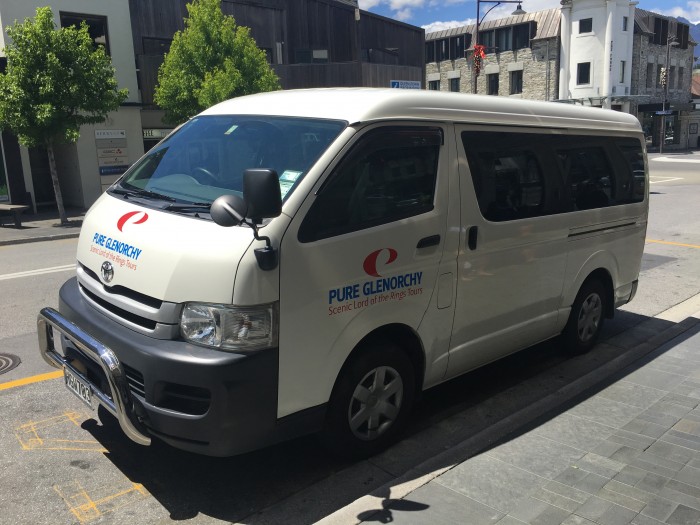 Our tour guide for the day was Tania, AKA Fluffy. She was a lot of fun, and she knew lots about the region. Since the tour is so informative, plus I don’t want to have too many spoilers if you take the tour yourself, I’m not going to share all of the Lord of the Rings facts I learned. Instead, I’ll share a few highlights. Needless to say, if for some reason you care about Lord of the Rings spoilers, you may want to avoid this post.

It was the longest day of the year, and thanks to being so far south, Queenstown is light from around 4am to 11pm. I’d learned that it had been 29 degrees celsius the previous day, which was far warmer than I had anticipated. The Accuweather app was terrible at showing accurate temperatures my entire time in New Zealand, resulting in my sweating my ass off on days where I expected it to be much cooler. That said, just three weeks before my trip, there was a snowstorm in the Queenstown area, and snow reached halfway down all the mountains. The heatwave had melted it all, but it shows just how varied the weather around Queenstown can be.

Our destination for the day would be Glenorchy, then onward through part of the Dart River Valley, AKA Paradise. More on that later.

The first stop of the tour was at Twelve Mile Delta, along Lake Wakatipu, where scenes from Ithilien were filmed. 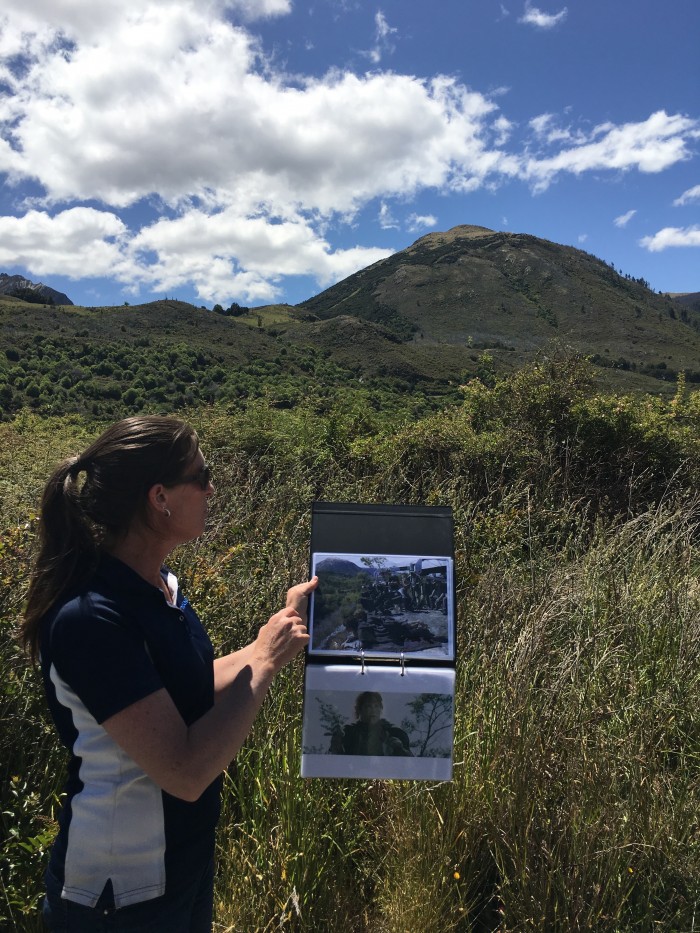 Filming for the Lord of the Rings films took place here way back in 1999. This made me feel old, but at the same time, it’s great for the local economy & tourists that seeing these LOTR sights is still so popular. You may remember the area from a scene where Frodo, Sam, and Gollum cook food, then later hide at an overlook & see olyphants.

There was family from China on our tour and they replicated the crouching scene in an adorable photo with their toddler as Gollum.

We continued on our journey, stopping again briefly at an amazing overlook. It’s easy to fall in love with New Zealand when you see this view over Lake Wakatipu, looking toward Glenorchy & the Dart Valley. The blue glacial waters look like they’ve been dyed, that’s how vivid they are. 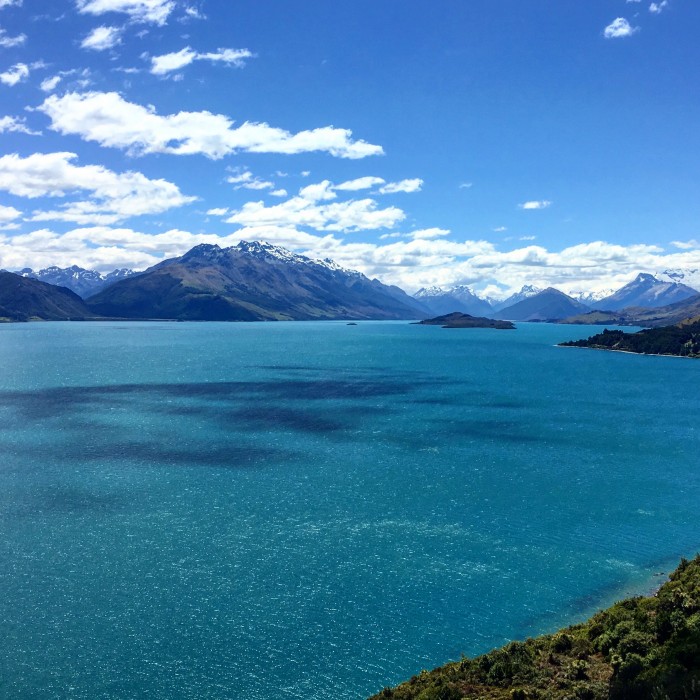 After a restroom break in Glenorchy, a town of around 350 people, we continued to learn more about the area. The region has been a shooting location for more than just The Lord of the Rings films. Other recent movies and TV shows filmed nearby include X-Men Origins: Wolverine, and the excellent mini-series, Top of the Lake. Not a lot of people have seen it, but once Fluffy learned that I was one of those people, she pointed out some of the locations where scenes were shot. 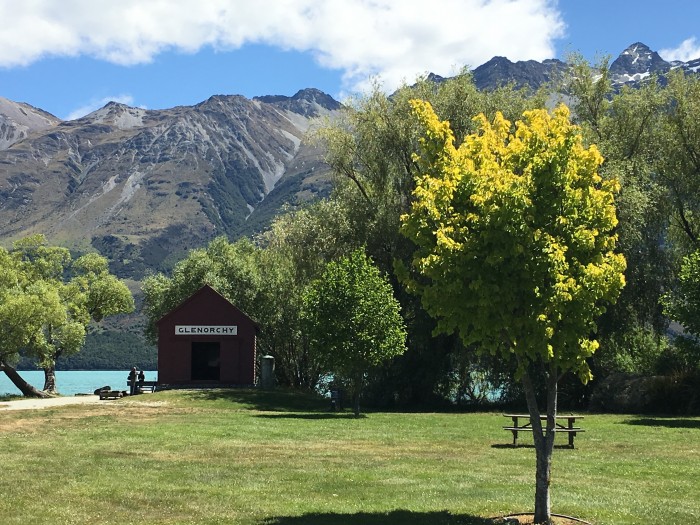 The landscape & people of the region are present throughout the Lord of the Rings films. For example, the mountains around the Glenorchy area stood in for the Misty Mountains, while most of the extras in the films were locals. In fact, in scenes where there are many horse riders, the riders were local women in costumes, since they were both local horse owners and the best riders around. Knowing that most of the riders were actually women adds an interesting footnote to Eowyn’s storyline, which features this key scene in Lord of the Rings: Return of the King.

After leaving Glenorchy & Lake Wakatipu behind, the scenery becomes even more remote. The barren Glenorchy Lagoon was used for the Dead Marshes in the films. While it was much brighter & colorful the day I visited, it’s still easy to see how the landscape was used. 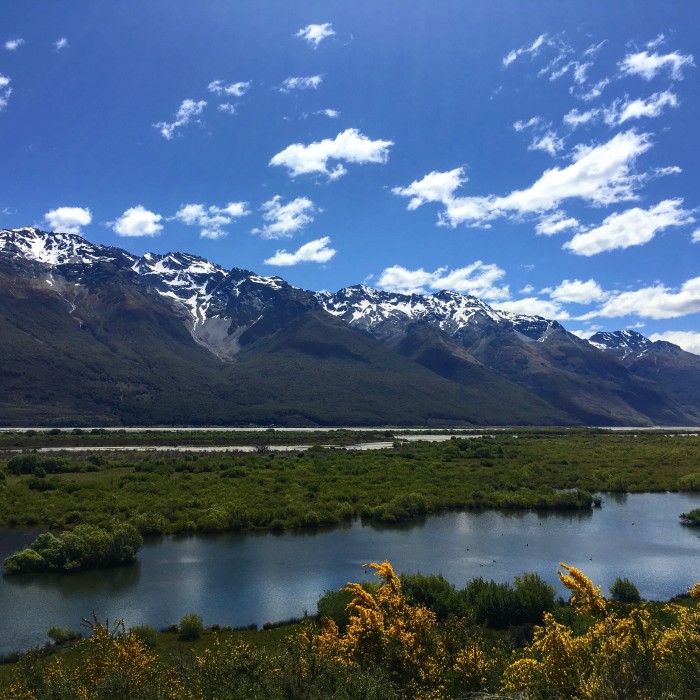 One thing you will note on the tour is just how well real-life places & CGI were combined to create Middle Earth. Some of the places you’ll stop at are barely recognizable, while others are immediately evident.

We next crossed over a bridge that featured in X-Men Origins: Wolverine. Here’s a view of it, including a mistake that was made in the filming.

After passing through the tiny Paradise, we were on our way to our snack spot in the middle of the Lothlorien Forest. By this point, we were surrounded by Mount Aspiring National Park, one of four New Zealand National Parks that comprise theTe Wahipounamu UNESCO World Heritage Site. I would end up visiting three of the four parks during my time on the South Island.

Lothlorien Forest of Middle Earth is actually Paradise Forest. The beech trees & their small leaves let in lots of natural light, making it the perfect place to shoot forest scenes for both Lothlorien & other forests in the films. 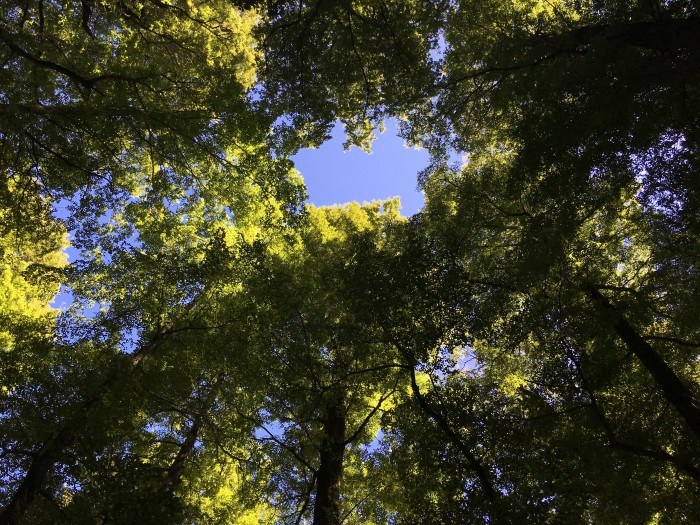 Still, this wasn’t good enough for LOTR director Peter Jackson. Large fake trees were added to the forest from Wellington’s Weta Workshop. The leaves of the trees in the forest were vacuumed up, then local schoolchildren painted them gold so they could have the exact look that Jackson was looking for. Despite this movie “magic”, there are still plenty of landmarks, such as this crooked tree that resembles Treebeard. 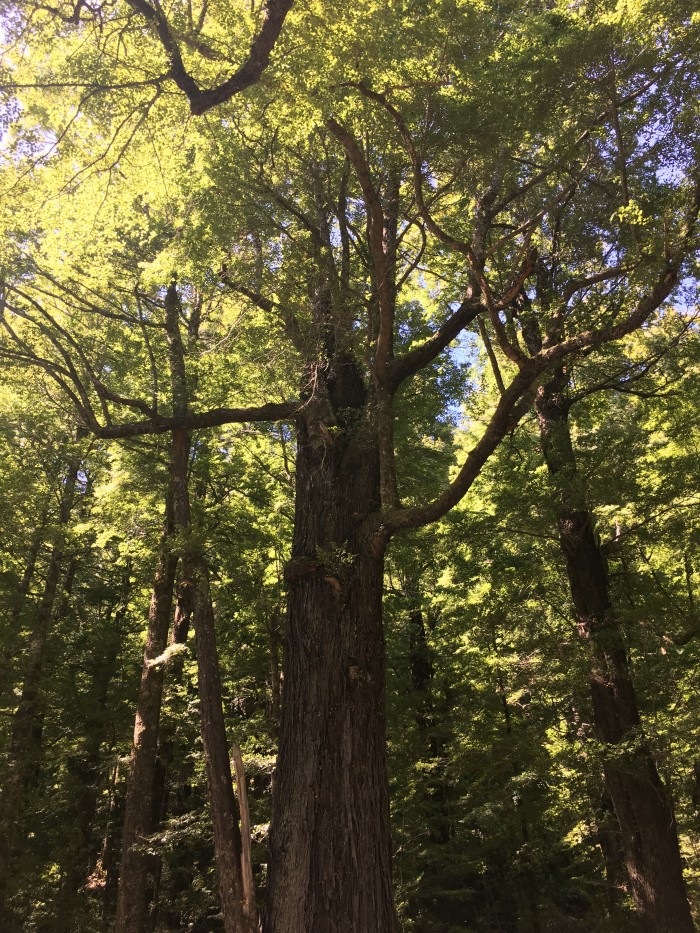 The Paradise Forest was the filming location for one of the key scenes in the first Lord of the Rings film, LOTR: The Fellowship of the Ring, where Boromir, Merry & Pippin are chased by uruk-hai.

After we walked around the forest a bit, it was time for a snack break. Fluffy had brought us sandwiches, as well as homemade apricot cakes. They were delicious. It was a nice break to be in the shade of the quiet forest for a while. We ate like hobbits, then we were taken to Isengard. 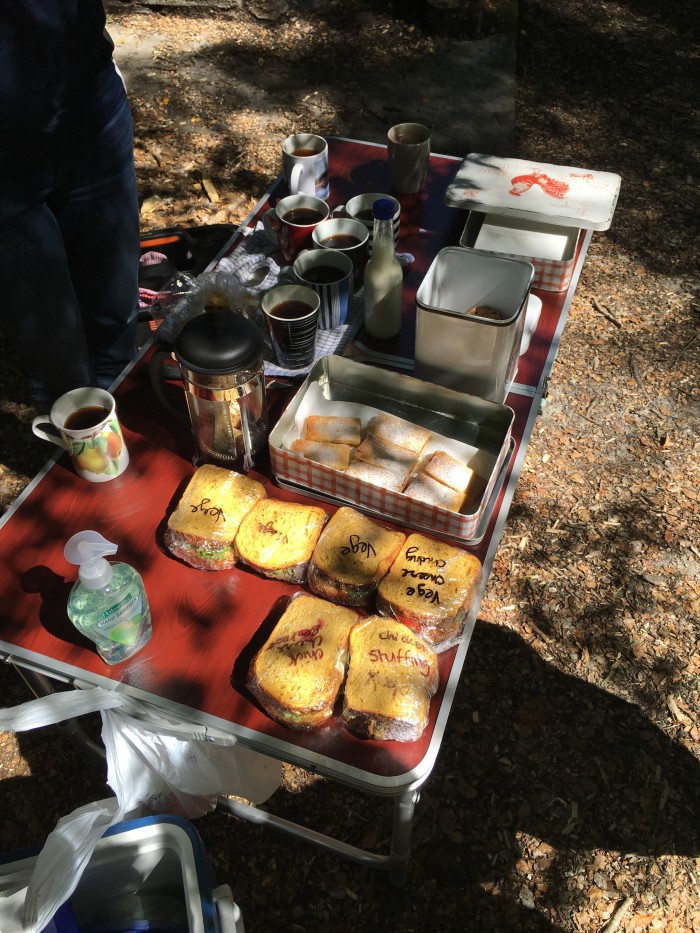 We went further into Paradise, following the path of the Dart River. The river flows through a massive glacial valley that is is surrounded by abruptly towering mountains.

This landscape was the perfect backdrop for one of the most important location of the Lord of the Rings trilogy, Isengard.

On a sunny day, Isengard doesn’t look much like how it does in the films, but you can still spot familiar landmarks. Here are some photos from the day I visited. Rather than orcs and other fantasy creatures, the fields were full of sheep & cows. 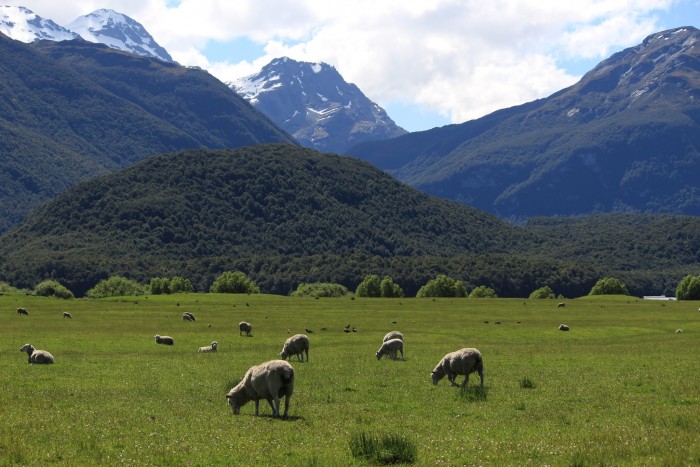 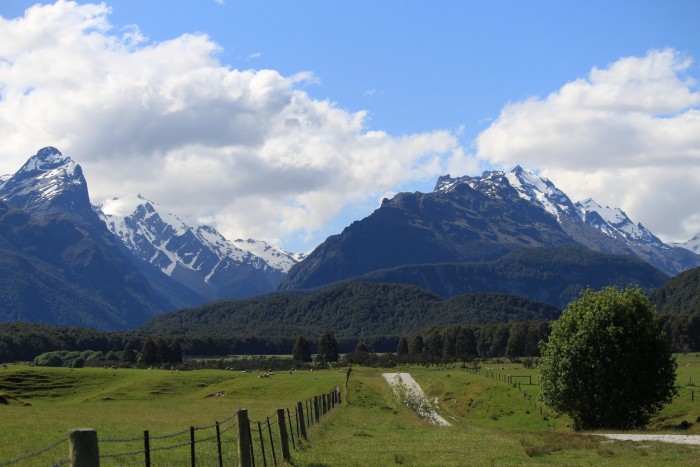 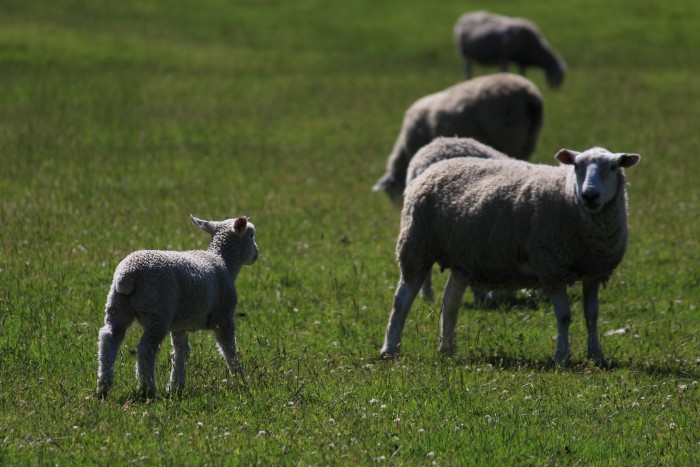 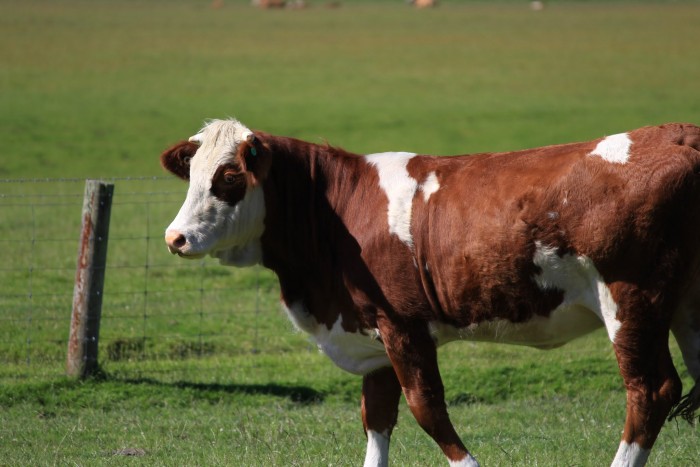 And here are a couple of Isengard scenes from the films.

You may notice that some of the mountains look close, but don’t quite match up. This was yet another situation where Peter Jackson’s vision & the actual landscape didn’t exactly match up, so mountains were digitally moved, added, or removed as needed.

Same goes for the odd gumdrop-looking tree that stands out along the edge of the valley. This tree was moved from Dunedin by Peter Jackson so it could be placed next to Beorn’s House when filming for The Hobbit: The Desolation of Smaug took place here. 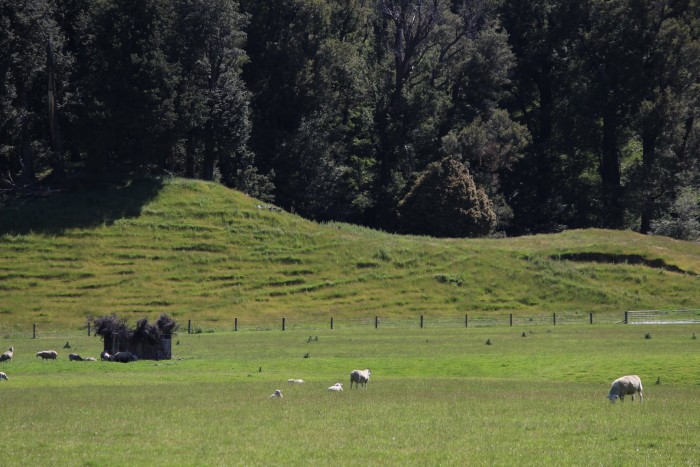 Maybe it was due to the season I was traveling in, but as far as I’m concerned, Gandalf (Sir Ian McKellen) is New Zealand’s Santa Claus. Many more Lord of the Rings scenes were filmed in the area, including Gandalf’s ride to see Saruman. Here’s a random fact that would have changed the films a lot: Sean Connery was originally offered the part of Gandalf. I can’t even picture what The Lord of the Rings would be like without Sir Ian McKellen.

By now, we were at the furthest point of our journey, so it was time to start heading back. We were only 40 km away from Milford Sound, yet thanks to the terrain, accessing the sound by road is only possible via half-day drive from Queenstown, heading south, then west through Te Anau before heading back north to the coast. I would be taking that tour the next day. The scenery throughout all of New Zealand’s South Island is stunning.

We stopped for photos at the Paradise sign, then headed back to Queenstown. 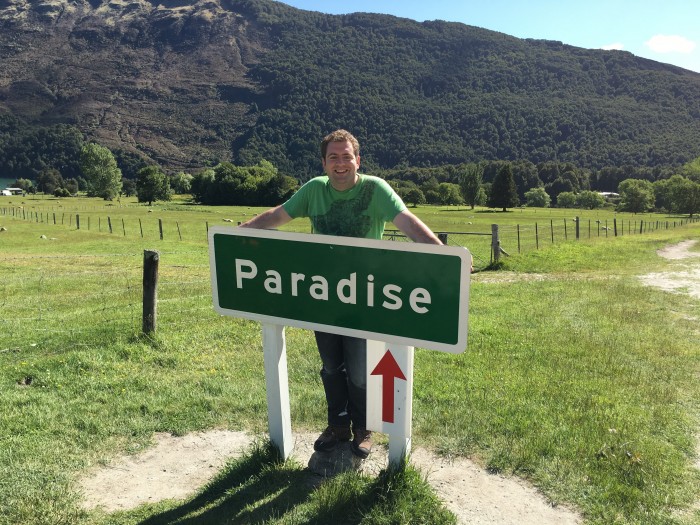 Though I rarely take tours, I was glad I took this one with Pure Glenorchy (website). Fluffy, our tour guide, was excellent, and knew all kinds of local & national facts in addition to her Lord of the Rings knowledge. Even if you’re not a fan of The Lord of the Rings, you’ll still enjoy all of the scenery. At the very end, we even received a CD with photos from the tour throughout the year in various weather conditions, so we could see all of its glory. It’s a nice touch since not every tour is going to have the fantastic weather that we enjoyed. 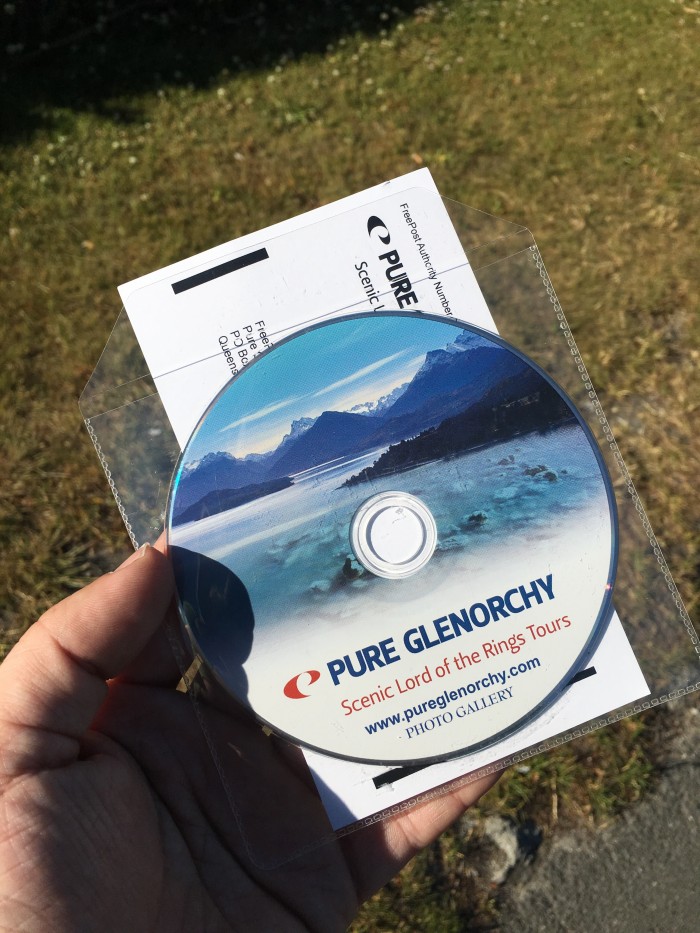 I had a great day exploring Queenstown, Glenorchy, and Paradise. At 9pm, the sun was still bright, and even though I had been out having dinner & beer in Queenstown for a while, I was still treated to this late night sunset over Lake Wakatipu. Sometimes it’s possible to have a view straight out of a movie without needing any CGI enhancements. 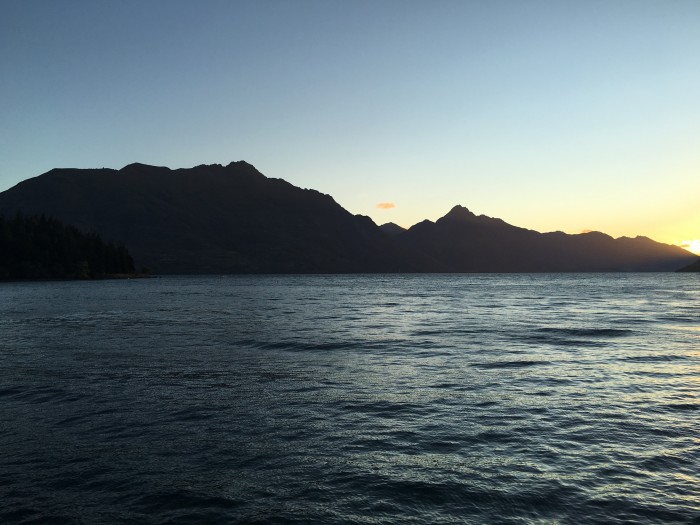