New Zealand’s craft beer scene is great, and it’s only getting better as knowledge about good beer spreads throughout the country. While Wellington has the best craft beer in New Zealand, other areas such as Queenstown are also beginning to have new bars and breweries opening up. As more and more people move to Queenstown, the demand will only grow. At the moment, Queenstown’s brewery scene is small, but it’s growing.Here is my guide to the best places to drink craft beer in Queenstown, including breweries, beer bars, & tap rooms. 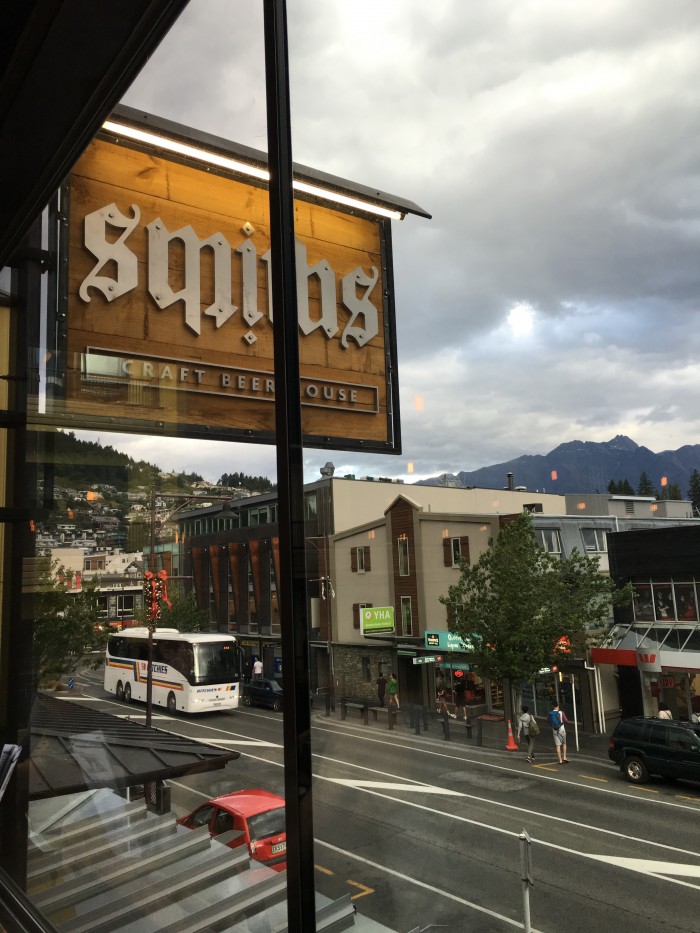 Smiths Craft Beer House was a pleasant find on my first night in Queenstown. I would end up going back almost every other night I was there. The bar features 18 rotating taps of some of the best craft beers in New Zealand, plus a large, high-quality bottle selection. 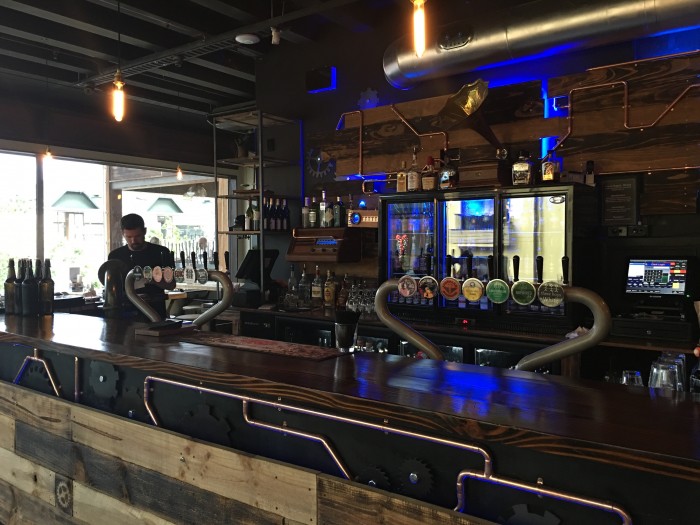 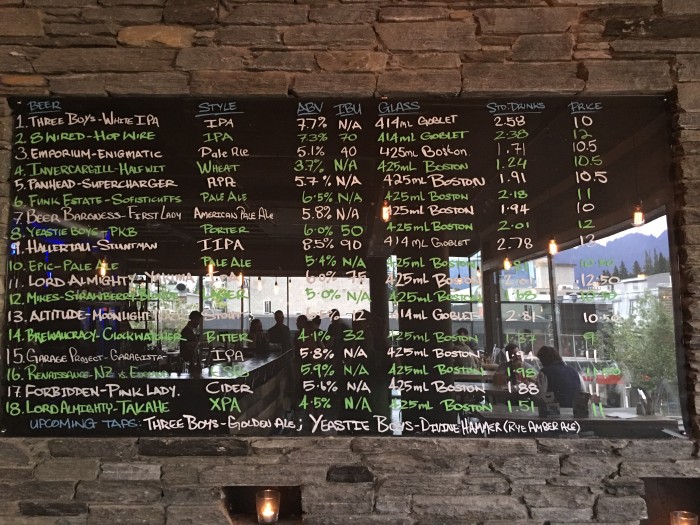 Smiths also has a nice food menu. The loaded fries were awesome, though they were an insane portion for just an appetizer. The croquettes were also great. 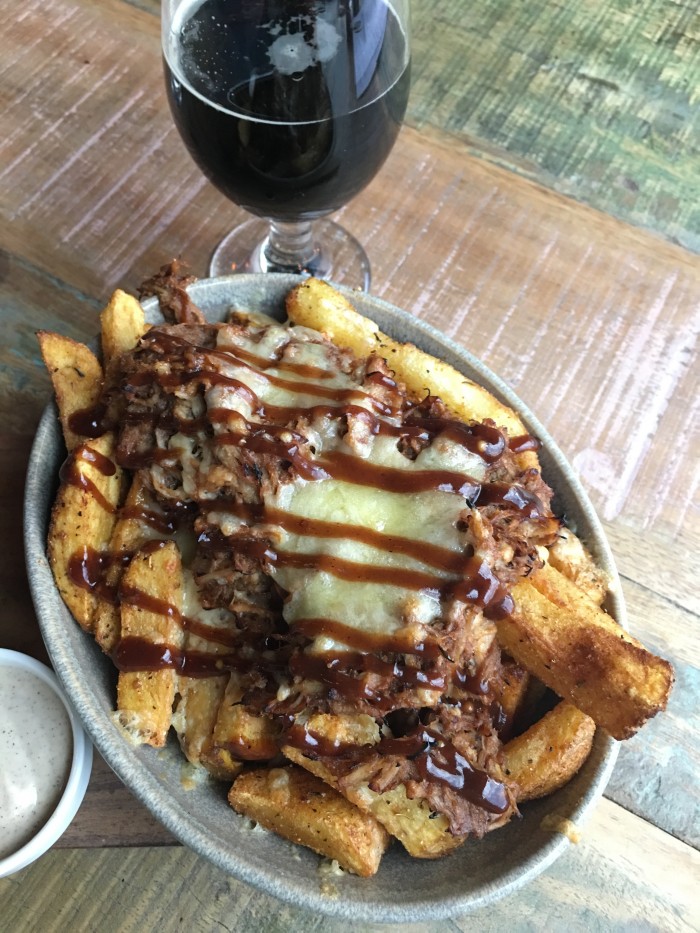 Many of the bars in Queenstown have a touristy feel thanks to the transient populations of the town. Those sorts of bars are not my style, but I loved Smiths Craft Beer House because it felt like a neighborhood bar despite most of the people there being visitors. There were board games available to play, plus plenty of space, including a large outside patio deck. As far as the music, it was 90s, much like the rest of what I heard in New Zealand, but it was great 90s music like Pearl Jam, Nirvana, Weezer, Radiohead, Garbage, Smashing Pumpkins, & Foo Fighters. 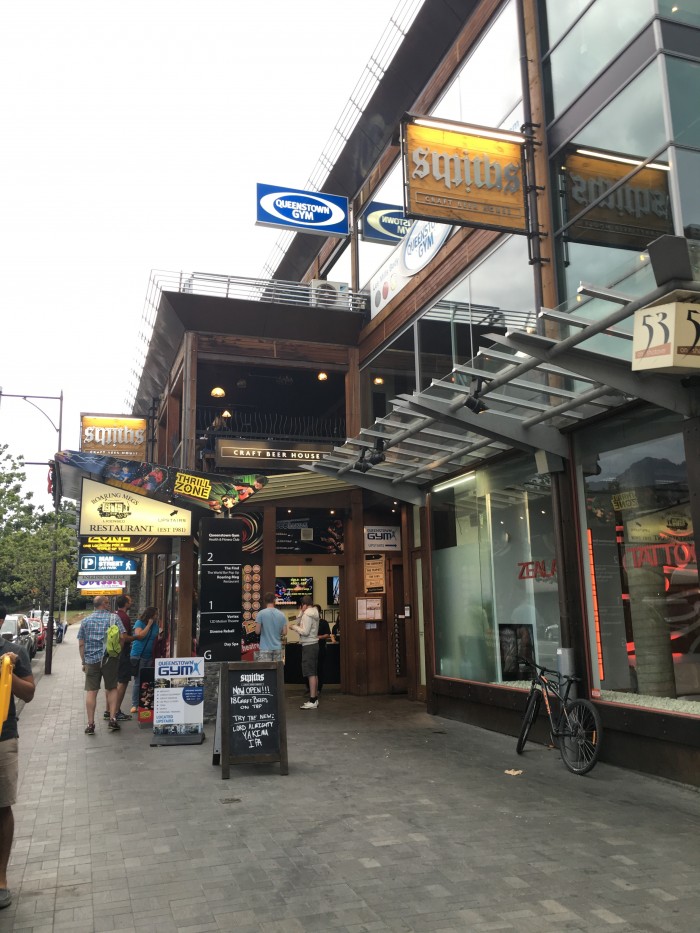 When I visited Queenstown, Smiths had only been open for a month, but they are clearly on to something good. The bar staff were mostly visitors to Queenstown as well, but they were extremely knowledgeable about New Zealand and other craft beer, and they were friendly too. We spent my visits there talking about beer & more. On my last night in Queenstown, Christmas Eve, they even shared some fig pies one of them had received.

In my opinion, Smiths is one of best places to drink craft beer in Queenstown, but there are a few other nice spots as well for when you want a bit of a change.

Beech Tree is Queenstown’s newest craft beer bar. With 23 taps, there’s a huge selection of local New Zealand beer to try. And what goes better with cold beer than wings? 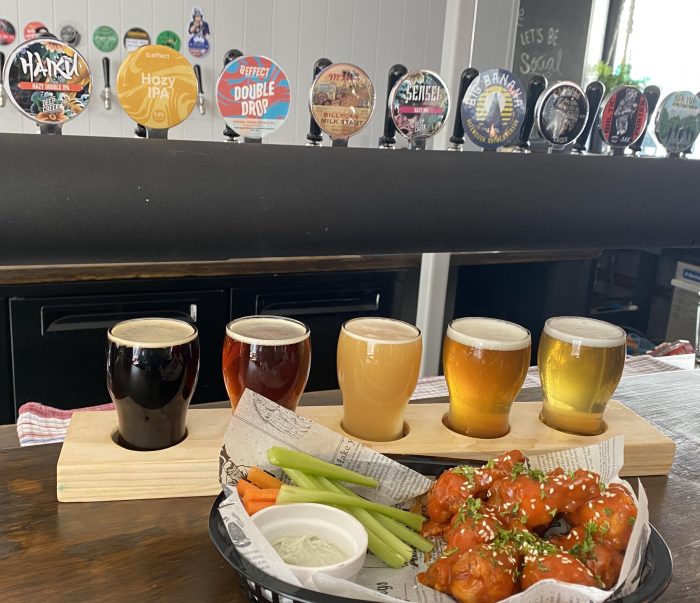 While you’re drinking, enjoy sporting events on TV or some board games. Bring your four-legged friends too, as Beech Tree is a dog-friendly bar! 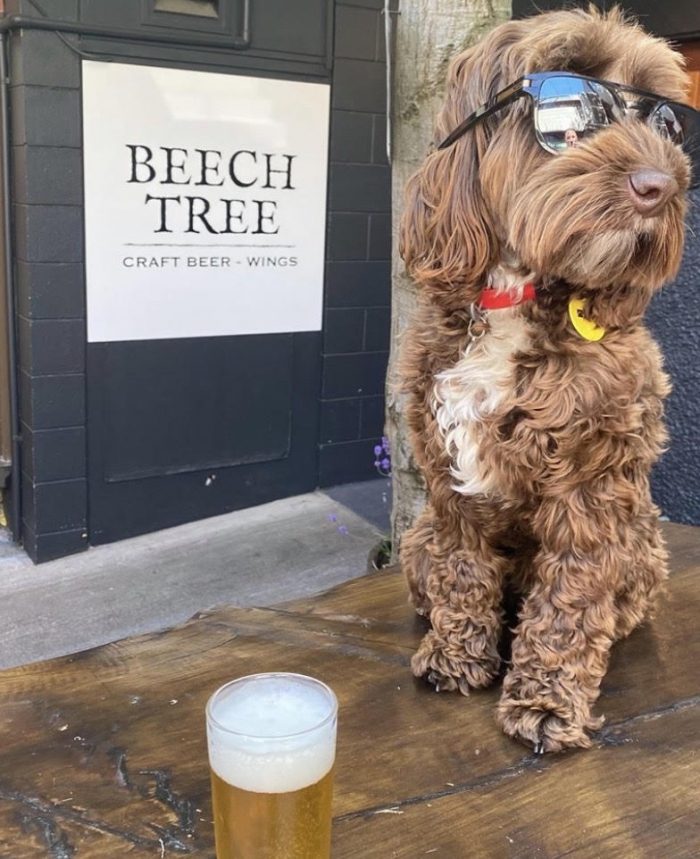 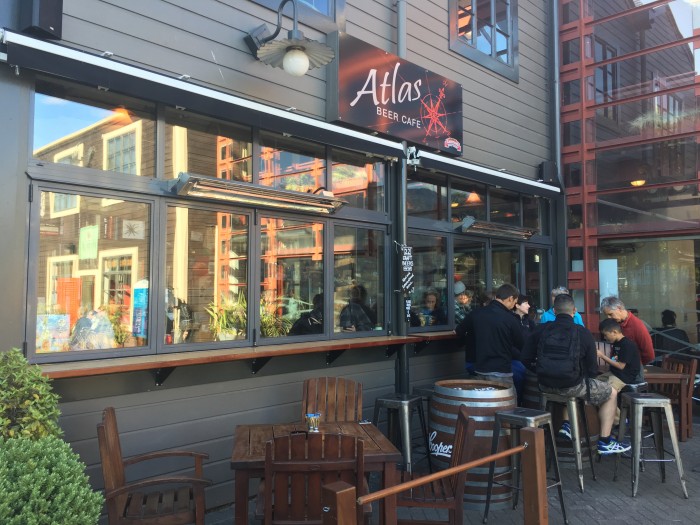 Atlas Beer Cafe is a smaller beer bar, but what it lacks in size, it makes up for on what it packs into the small space. There are 22 taps, plus an eclectic, but quality bottle selection. Among other New Zealand breweries, Atlas features several selections from local Queenstown craft brewers Altitude. One of their beers, Mischevious Kea, sees a portion of the profits donated to the Kea Conservation Trust. I would actually get to see a Kea in the wild in a parking lot at Franz Josef Glacier. 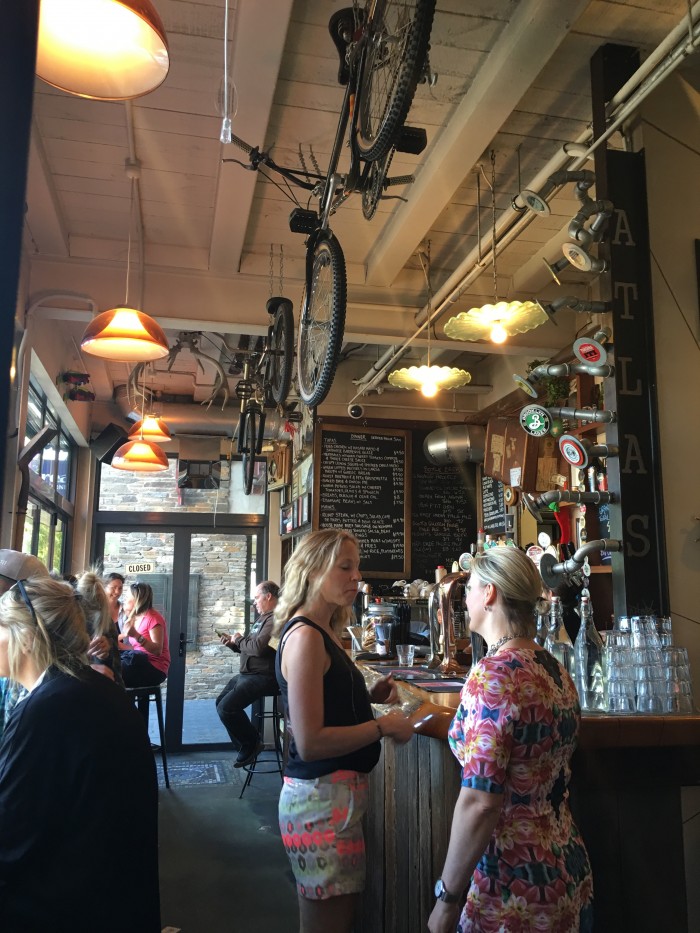 One drawback to being a small bar is that there’s not a lot of seating. There are several tables, but not many standing spots or spaces for small groups. There is an outside patio with heaters (not necessary when I was there on the longest day of the Southern Hemisphere year), so I sat out there when I first arrived, until a group stole my table when I went inside for another beer.

Oh, and the bathroom is through the fridge. That will make sense when you see it. 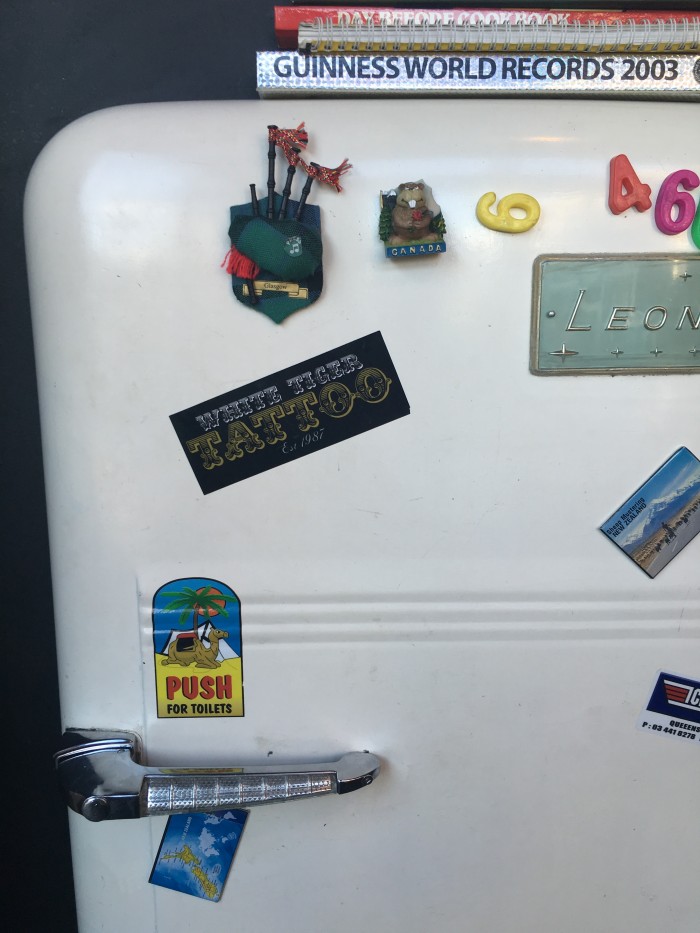 Right next door to Atlas Beer Cafe is Public Kitchen and Bar. It’s a bit more upscale, and it’s more of a full-service restaurant than a craft beer bar, but their beer selection is interesting. There wasn’t a huge selection, but what they had there I had not seen anywhere else. 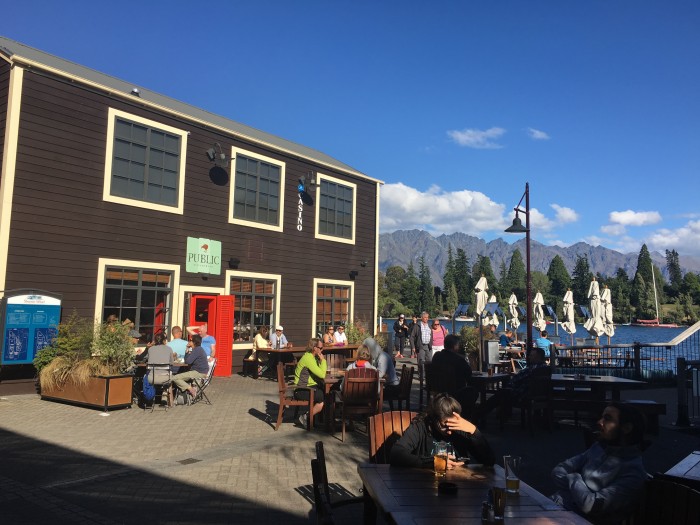 One of the beers I had was Killarabbit Double IPA from Bannockburn Brewing Co. The beer is unique because it’s fermented in pinot noir barrels. It’s actually made by a winery, so it’s the only beer they make. The ratings online for the the beer were lower than what I expected, but I think that most people didn’t understand just what this beer is. 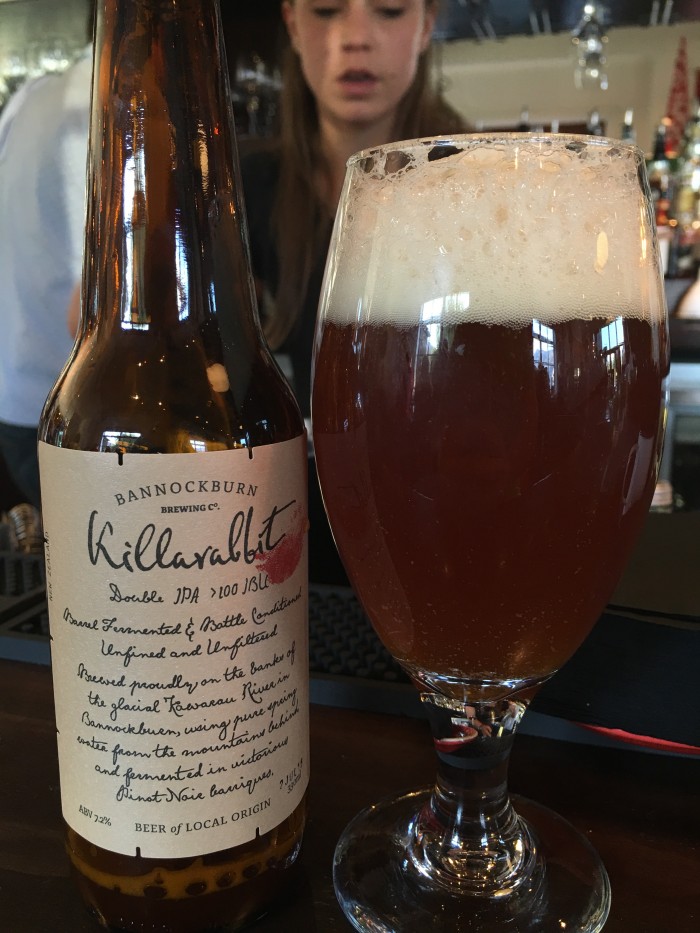 The music in Public Kitchen and Bar certainly left a bit more to be desired. It was straight up sappy alt-rock, featuring the Goo Goo Dolls, James Blunt, Coldplay, and The Rembrandts. I would hear “I’ll Be There For You” several times on my trip. The 90s are alive in New Zealand. 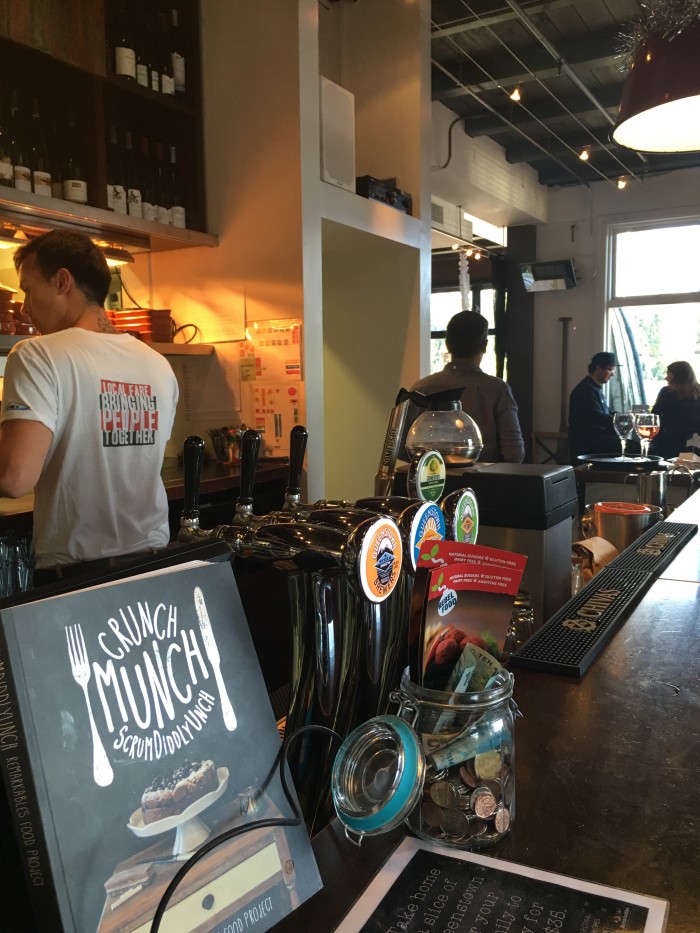 The staff were all friendly. The fact that one of the bartenders was Glaswegian certainly did not hurt the appeal of the place. I ended up staying at the bar for a while & drinking with some of the staff. It might not appear like a great beer bar at first glance, but give the selection a chance, and you might find something great.

Queenstown’s beer scene is rapidly evolving. While older mainstays such as Speights & Mac’s can be found at local bars such as Pub On Wharf (which I did not have a chance to get to), if you dig a little deeper, you can find some newer breweries & newer bars that are raising the bar for craft beer in Queenstown.