My departing flight from New Zealand was the reverse of my trip from Kuala Lumpur to Auckland, this time going from Auckland to Kuala Lumpur on Malaysia Airlines in Business Class on an Airbus A330-300. It was still part of my generous US Airways award booking. 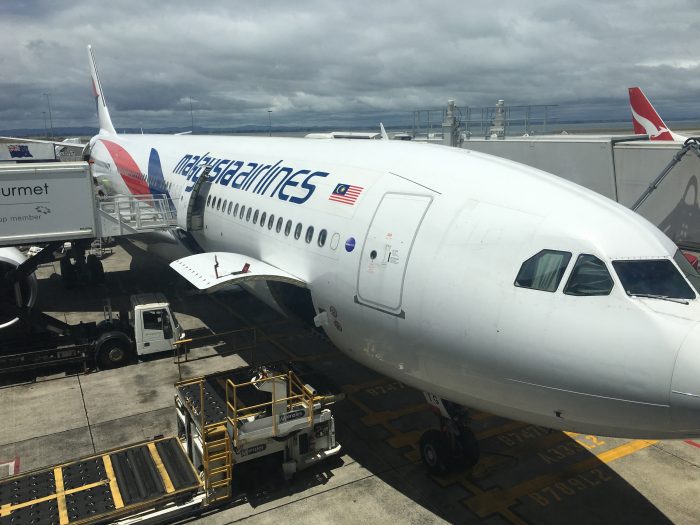 After a faster-than-expected bus ride from central Auckland to the airport, I realized I was too early for the check-in counter to be open. According to the monitors, the counter wouldn’t be opening for another 50 minutes. Since the counter wasn’t marked, I couldn’t even go stand in line to wait.

Fortunately, about 5 minutes after I arrived, a Malaysia Airlines staff member arrived and started to put the signs out. A few minutes later, more agents arrived & began to set up. The counter ended up opening four hours before the flight, which is perfectly reasonable. I was just at the airport far earlier than is normal.

After checking in, I headed to the Emperor Lounge to relax for the next few hours. You can read my review of it here.

Just as it had been in Kuala Lumpur, the boarding area was complete chaos. There were no signs and no announcements. Combine that with lots of families with kids, and there’s no clear process for all of the people trying to crowd the gate. The business class passengers started to queue when the boarding time arrived, only to then have half of economy join in as well. As good as Malaysia Airlines’ service is overall, their boarding process leaves a lot to be desired.

I was one of the last to board. The business class cabin was about two-thirds full. It was still the holiday period, so perhaps it was more crowded than normal, or perhaps there were just lots of upgrades, but it’s a decent sign compared to what I’ve heard about some Malaysia routes. 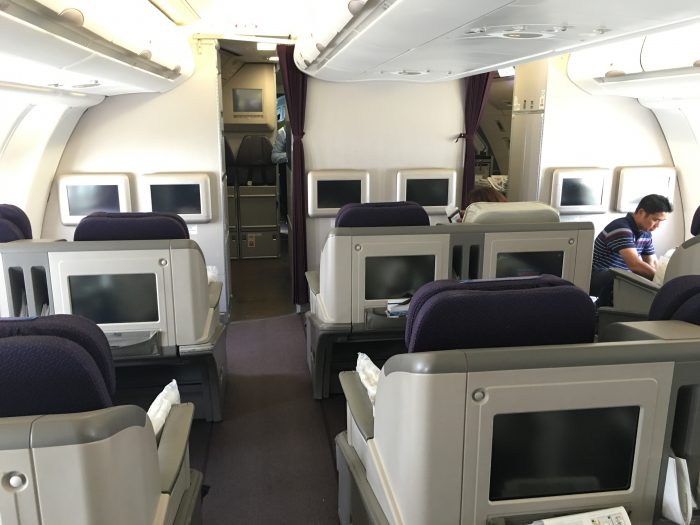 In the 2-2-2 business class configuration, I was in one of the middle seats (seat 4D) this time. Normally I hate middle-of-the-cabin seats, but in such an arrangement, it means never having anyone climb over you. After boarding was complete, I realized the entire row in front of me was empty, so I asked if I could move into seat 2D to give myself & the guy in my row a row to ourselves, and the flight attendant allowed me to. I have no idea why there was no row 3. 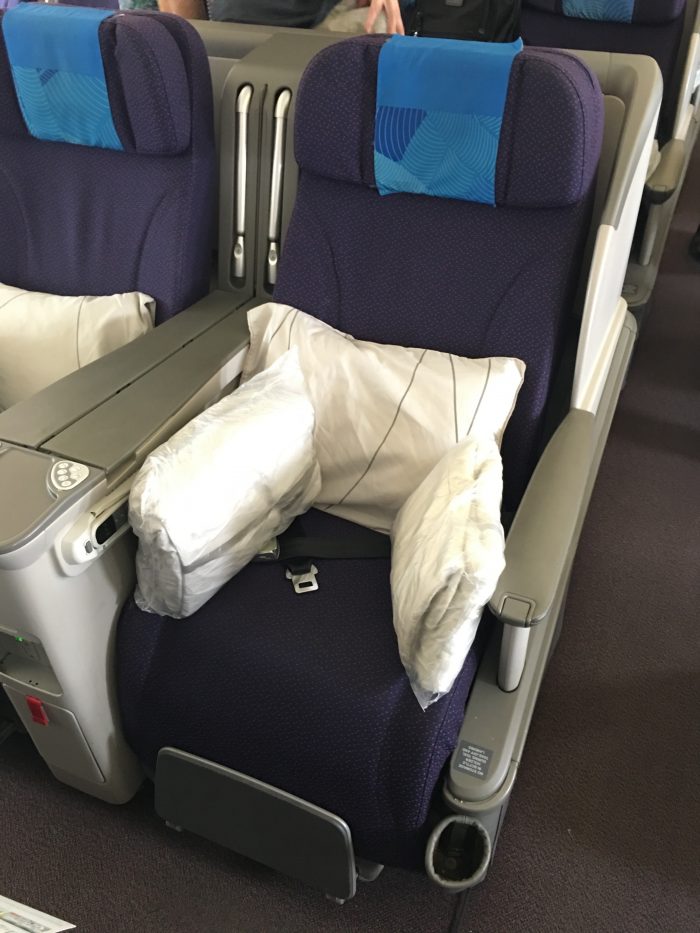 The seat was angle-flat, but since I had no plans to sleep on the flight, it didn’t bother me much. Still, it will be nice when Malaysia updates their business class cabins with better lie-flat seats, which should be happening soon on this Auckland-Kuala Lumpur route. 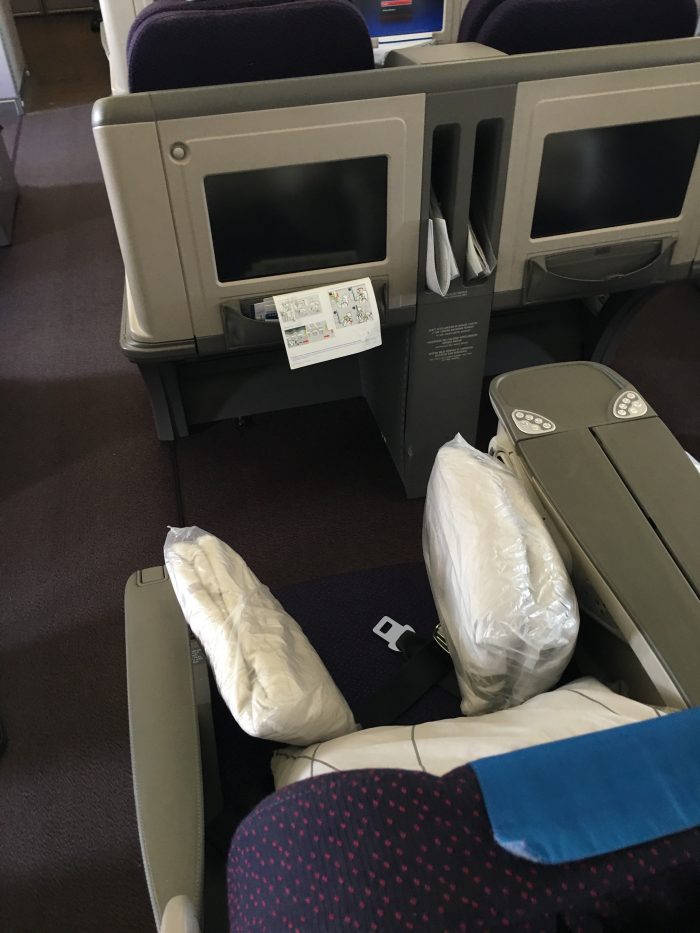 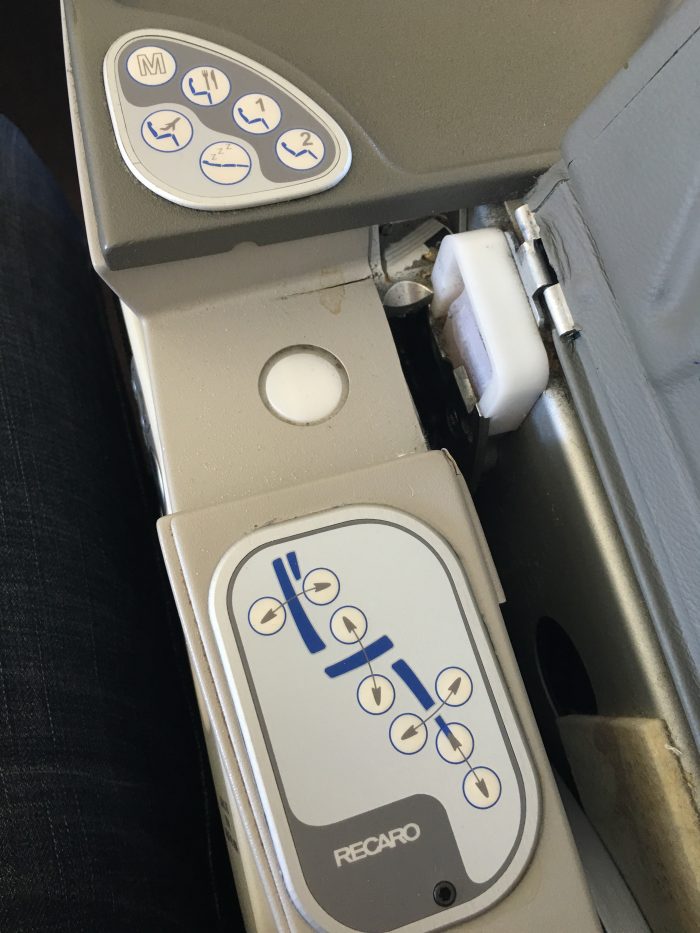 Despite boarding starting about 15-20 minutes late, we departed only 5 minutes late for the nearly 11 hour flight from Auckland to Kuala Lumpur.

Not long after we reached cruising altitude, meal service began. Here are the menus from the flight. 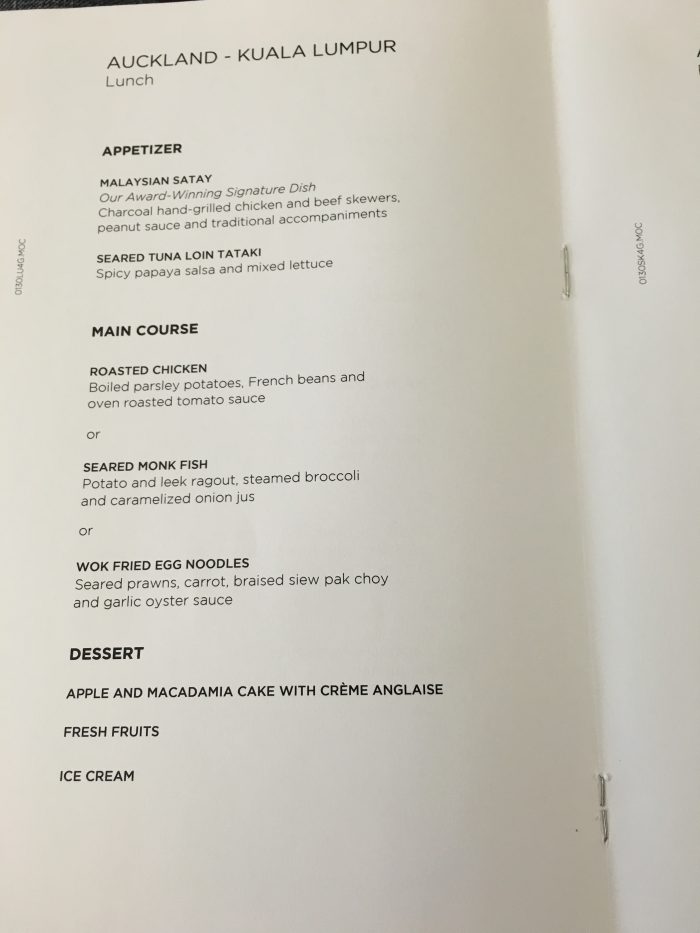 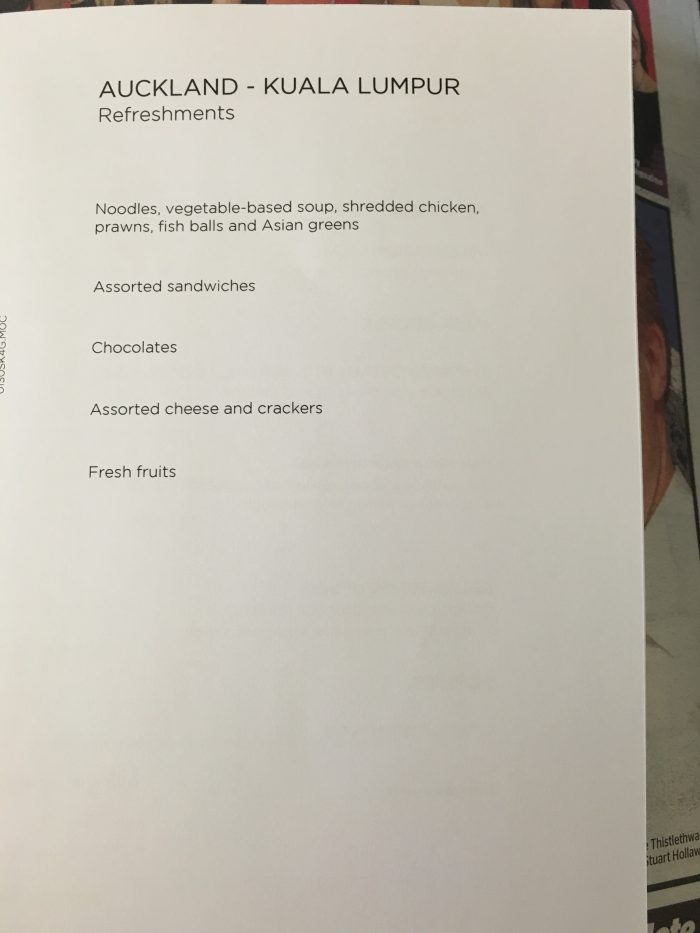 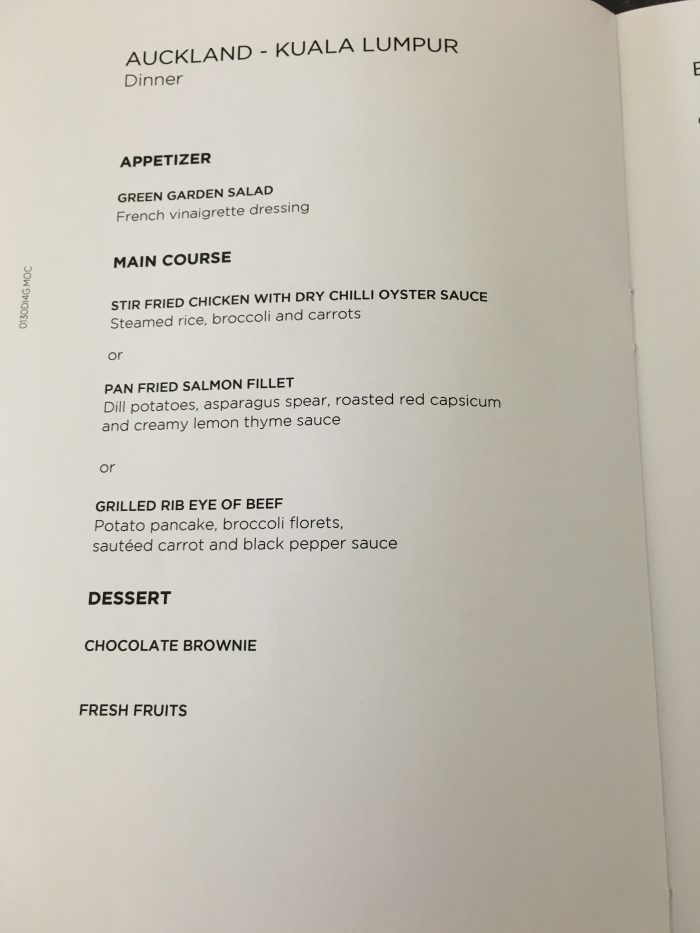 An announcement was made saying that the would be no peanuts on the flight due to an economy passenger who had a severe allergy, but this was ignored for business class, as we still had foods with nuts in them. I assume that was fine for the affected passenger, and didn’t let it take away from my enjoyment of Malaysia’s excellent satay. 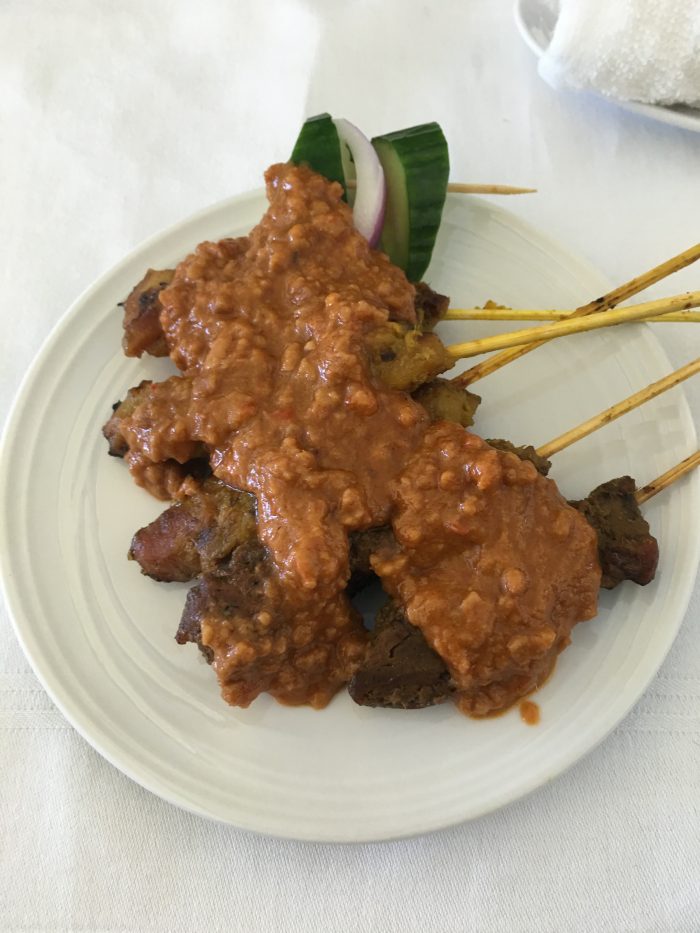 After my satay, I had the next appetizer, which was tuna, fruit, and garlic bread. 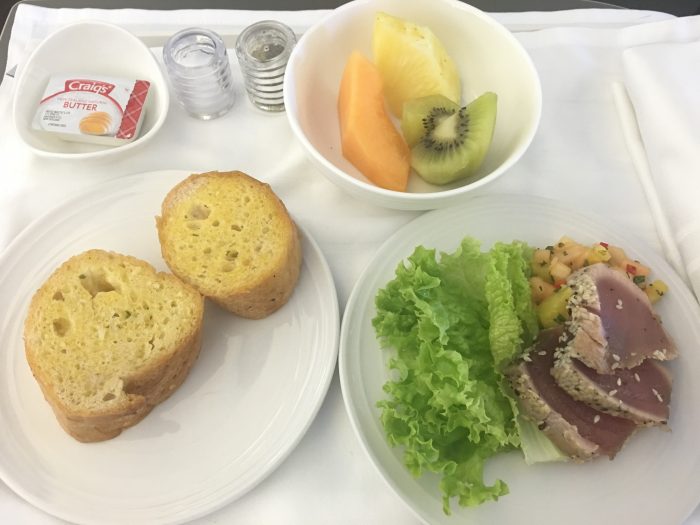 For my main course, I had the noodles with shrimp. It was nothing fancy, but well-prepared, and the shrimp were cooked perfectly. 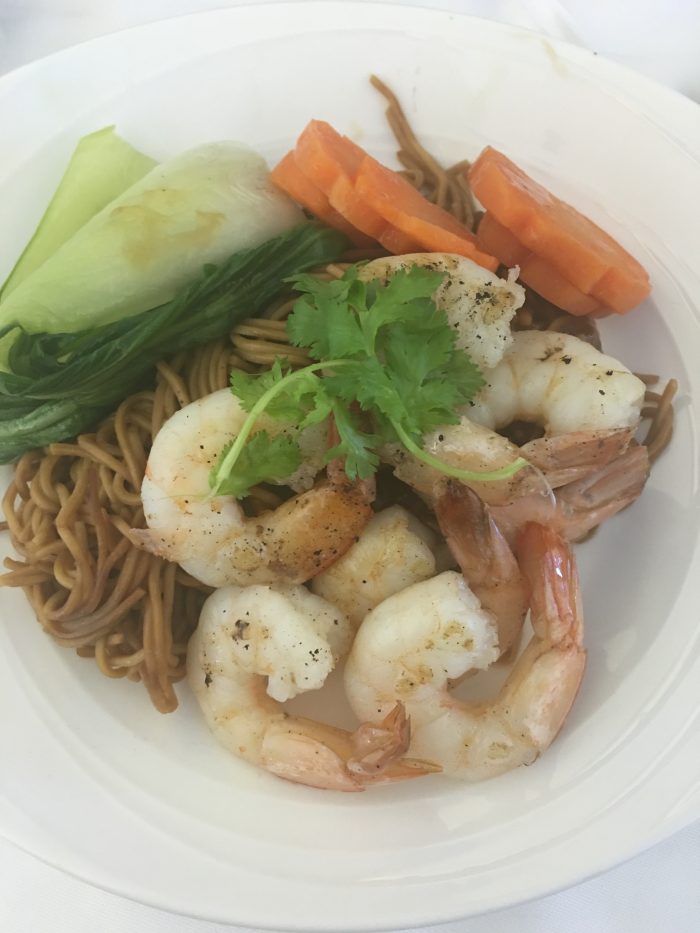 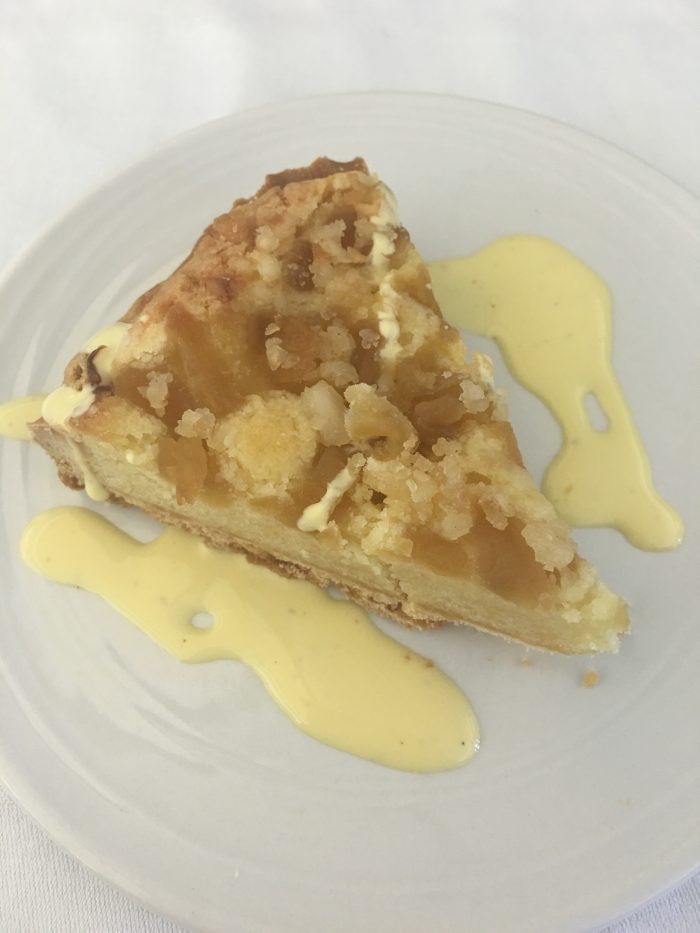 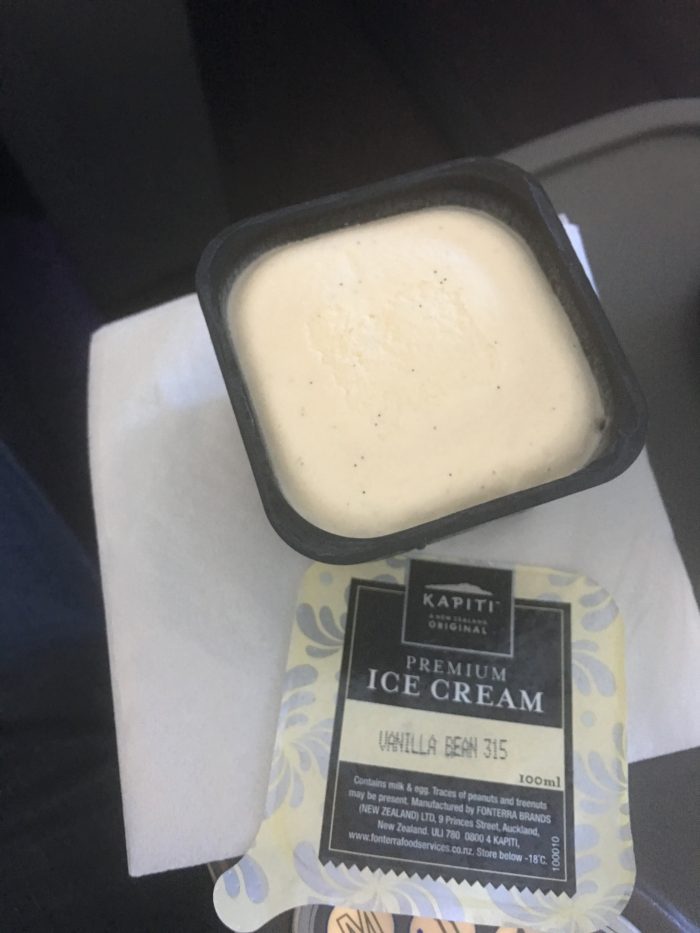 The biggest disappointment on such a long flight during hours where I would normally be awake was that the inflight entertainment system still had not been updated for January even though it was January 3rd. This was a problem because I had spent so much time on planes in December, and I was looking forward to having some new movie options. I had researched beforehand and hoped to watch The Martian & Room, but neither was available. Instead it was all movies I had seen before, as well as some I had no real interest in watching. I watched some episodes of Undateable, It’s Always Sunny In Philadelphia, and New Girl. I was glad I had downloaded episodes of Transparent on my phone via Amazon Prime because otherwise I would have run out of things to watch. Amazon Prime’s offline viewing is a great backup for any traveler.

Overall, the flight was uneventful. There was a tiny bit of turbulence, but nothing too bad. Halfway through the flight, the flight attendants brought around some snack options of sandwiches, fruit & cheese, but I skipped it, since I wasn’t hungry.

Not long before landing, it was time for dinner. I had the chicken, which was decent. I like that Malaysia Airlines actually uses some spice and flavor for their inflight meals, unlike a lot of U.S.-based airlines. It was followed by a brownie. 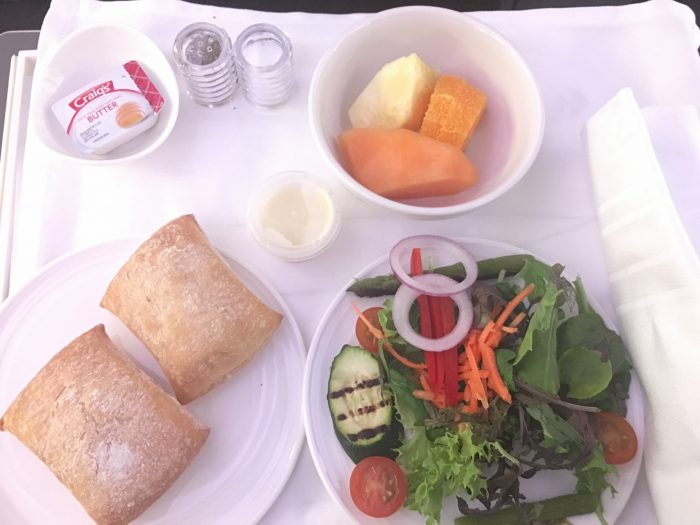 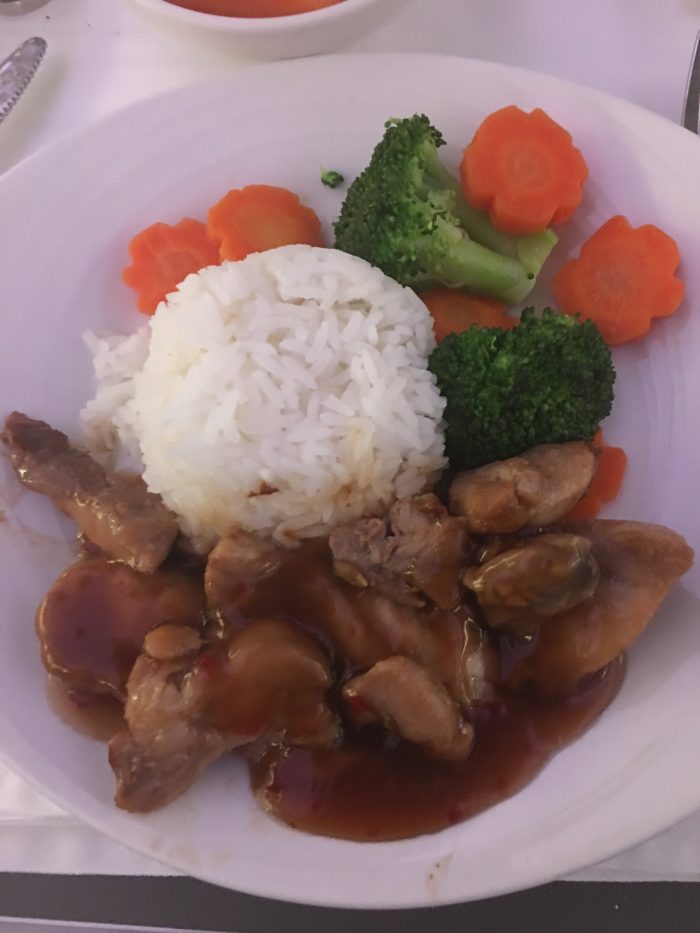 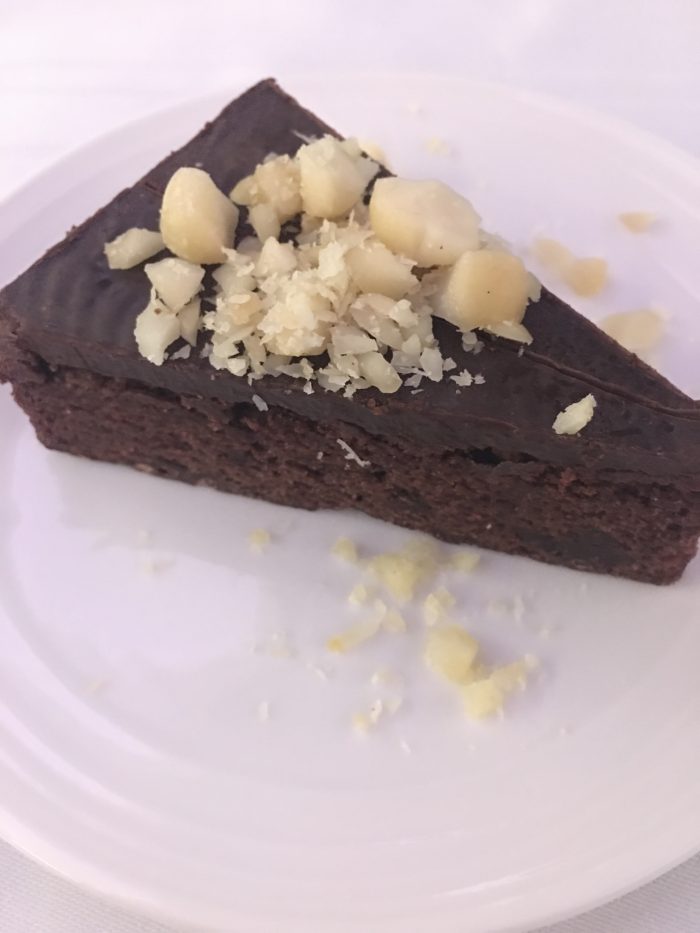 We landed, and it was time for me to head into Kuala Lumpur for my second 24-hour layover in the city.