My roundabout journey from San Francisco to New Zealand was nearly complete. All I had left was a flight back across much of the Pacific from Kuala Lumpur to Auckland. Thanks to my generous award ticket routing, I flew on Malaysia Airlines in Business Class on their Airbus A330-300. 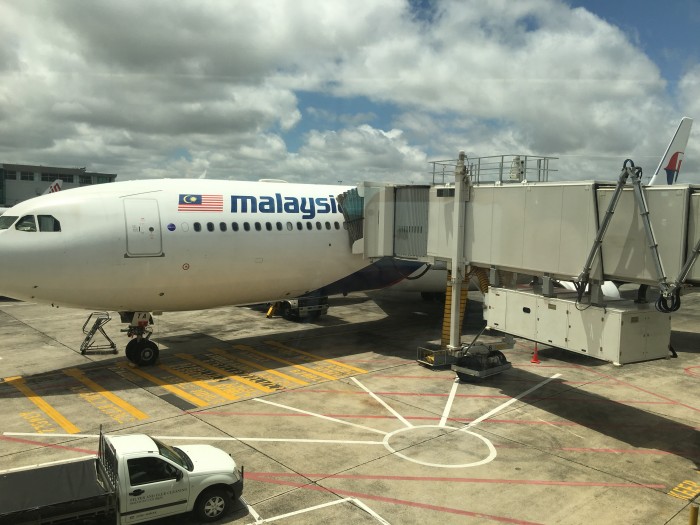 When I tried to check in for my flight in my hotel room, I couldn’t find any record of the booking via the Malaysia Airlines website. I chose not to panic, since there was nothing I could do at this point. Instead, I just left for the airport a bit earlier than I would have previously. I figured that worst case, I still had my booking record for my award ticket on American, and they would just reroute me somewhere. My worries turned out to be for naught, as I had no issues checking in at the airport. It must have just been an error.

Once I checked in, I began to make my way to the Kuala Lumpur satellite terminal, where my flight was departing from. I passed a huge display of airplane models, which was pretty cool. 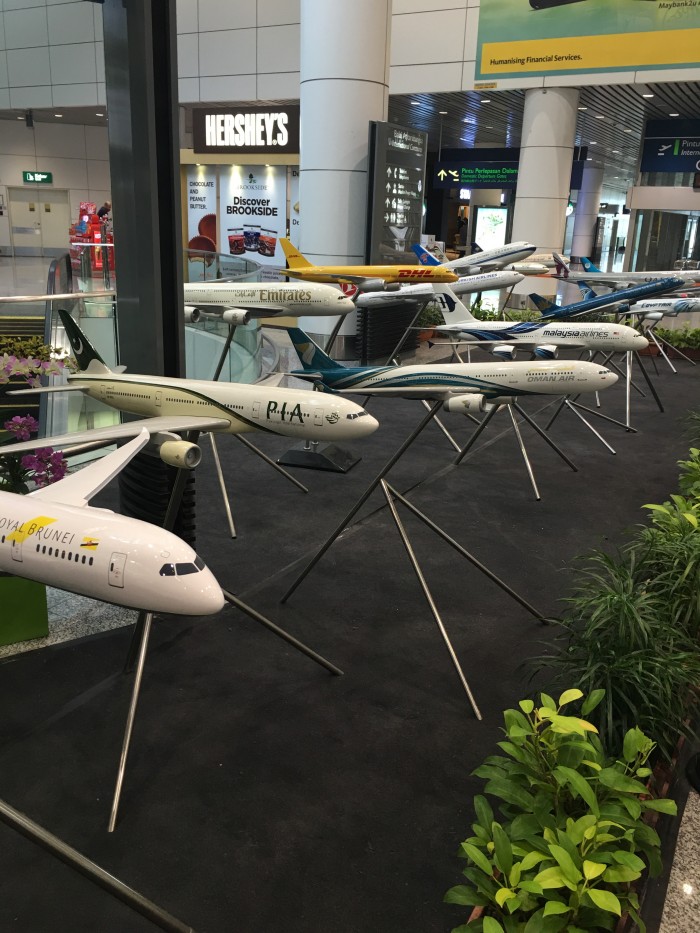 I also got to see the famed abandoned Boeing 747s. 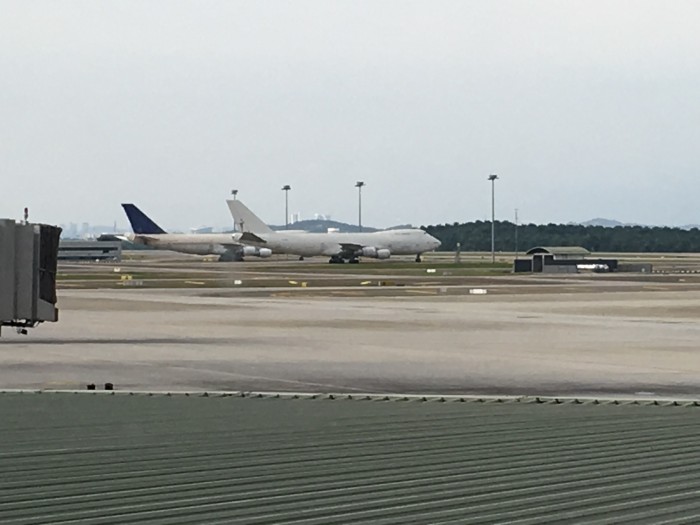 Since I had 5 hours before my flight, I decided to go to all 3 lounges I had access to. The links to those reviews are below.

Eventually it was time to depart. As I approached the gate, there was oddly a queue, with no separate business class line. Apparently, Malaysia only has separate queues for their A380s. 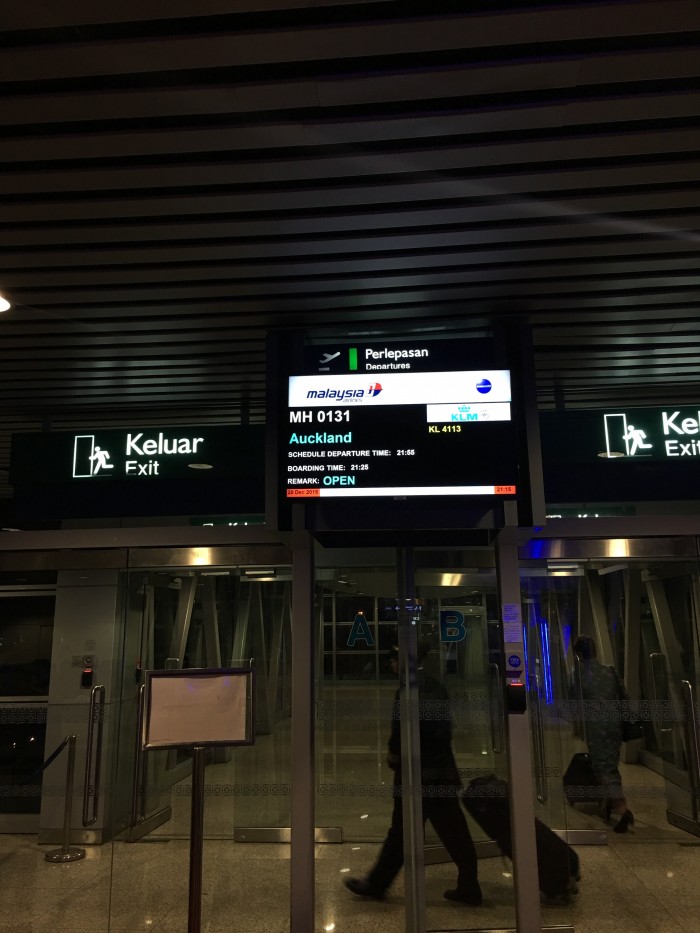 It seemed that nobody knew what to do, and there was only one person at the gate. Everyone had been told a specific time to go to the gate, but then we were all waiting. The crew was just arriving after nearly all the passengers were there. Even when more gate agents & flight attendants arrived, there was still chaos at the gate because no instructions were being given. As you’d expect, everyone then tried to board at once, though finally they called for business class first. The flight was surprisingly full for what I had expected, though it’s likely that it was busier thanks to the holidays.

The business class cabin on Malaysia Airlines’ Airbus A330-300 is in a 2-2-2 configuration. As such, the best seats for solo travelers (and really, anyone else who doesn’t want to disturb the other person next to them) are the two middle seats, since both have aisle access. Unfortunately, since I hadn’t been able to get a seat assignment online, I was in an aisle seat on one of the sites, so there was another guy next to me who had the window seat. 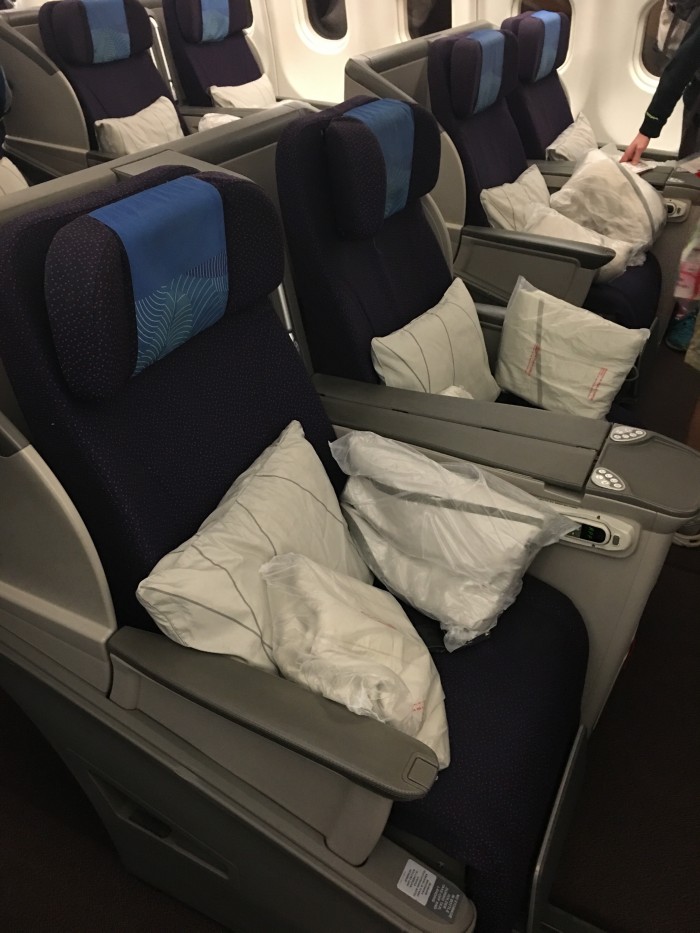 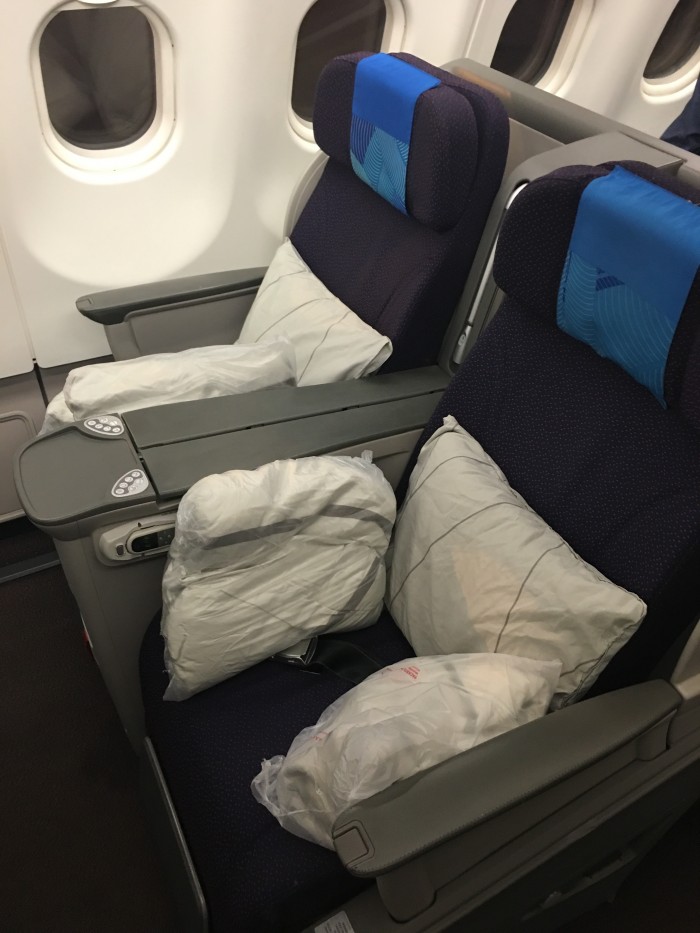 The seat was reasonably comfortable, though for a 10 hour flight, it was not as comfy as other business class seats I have traveled in. The headrest is one of the best I’ve encountered. Not only does it move up and down, it also has side flaps, plus it swings up. Maybe it’s not the most conventional setup, but it gives you lots of options for comfort. 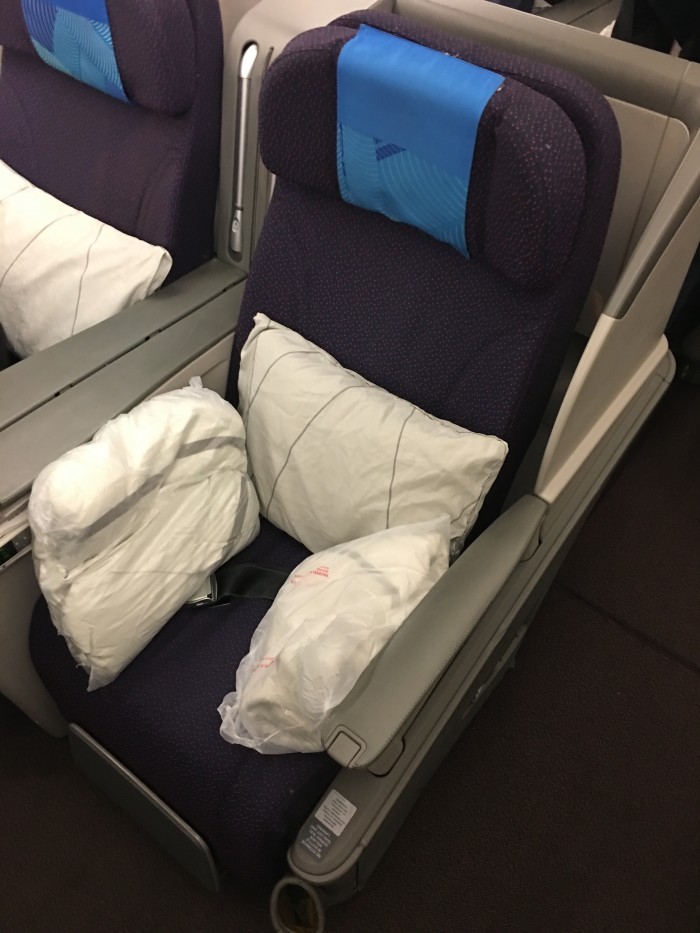 As far as the rest of the seat, there was very little storage. Couple this with the fact someone else is right next to you, and it’s a little cramped.

The video screen was nicely sized, though it doesn’t move. This makes sense, I suppose, since allowing it to move would block the path from the other seat, but it would be nice if it would at least angle a bit. 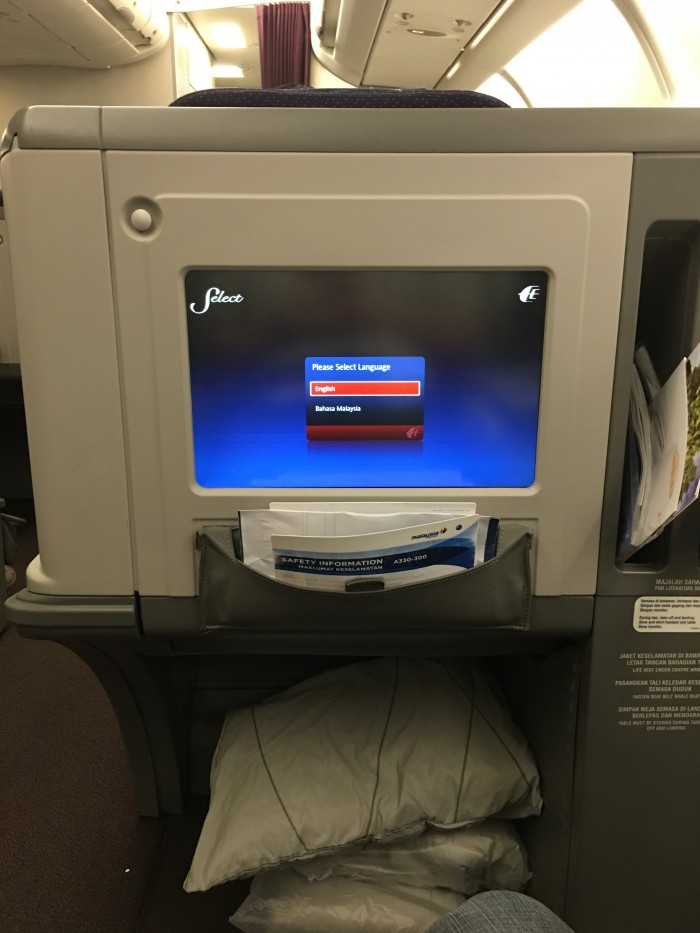 Right after we left the gate, we of course watched the inflight safety video. The bad lip dubbing was hilarious. Here’s the video (this may be an older version, but it’s pretty much the same):

There was also a prayer for the journey. This was a new one for me. But hey, whatever keeps the plane from falling out of the sky is cool with me. 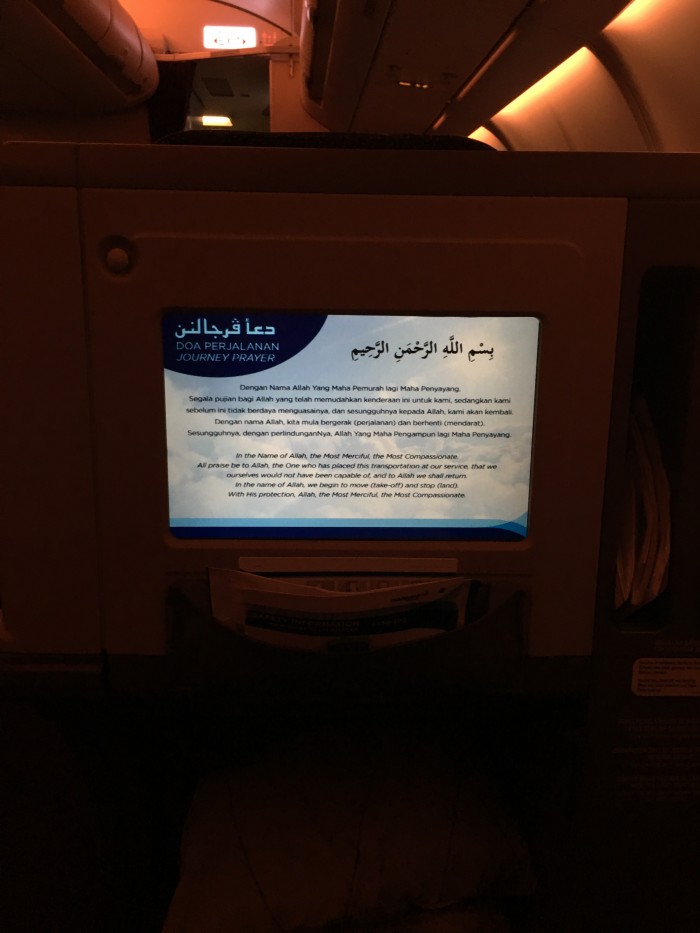 As we taxied, I checked out the amenity kit. The bag itself was nice, since it was designed by Porsche, but inside, the contents weren’t anything special. 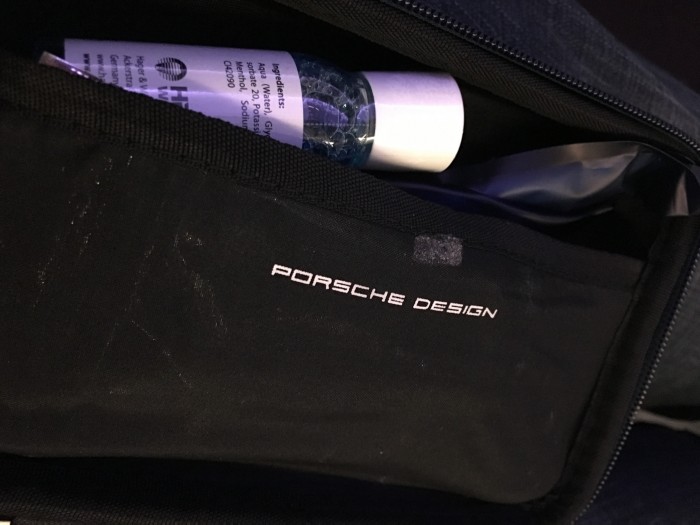 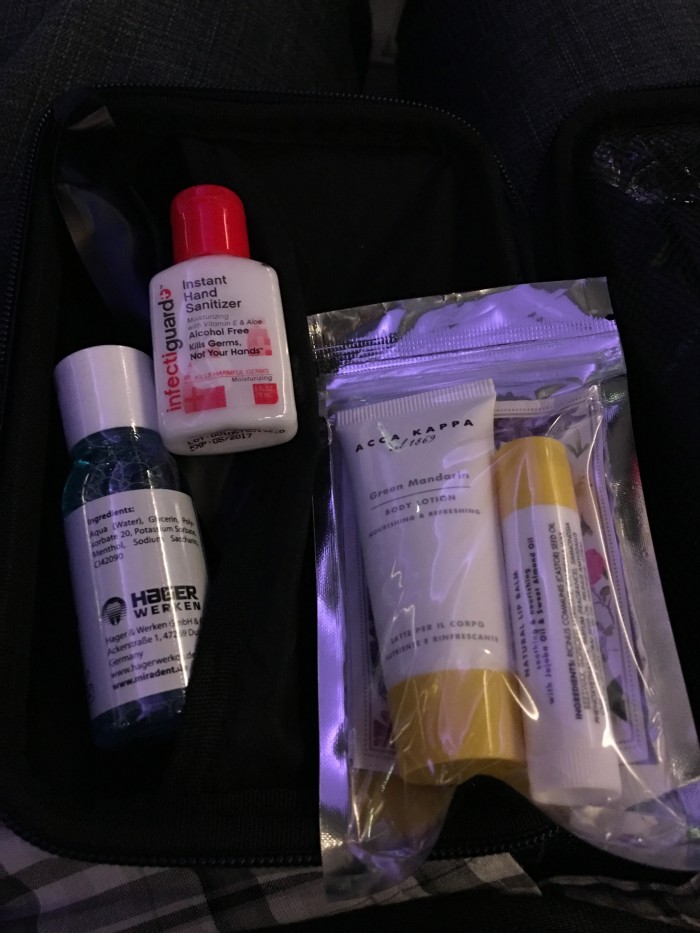 I’d been eating in the lounges all evening, plus I was exhausted from having been on the go for the last couple of days, so I skipped most of the dinner. Here are all of the menus from the flight: 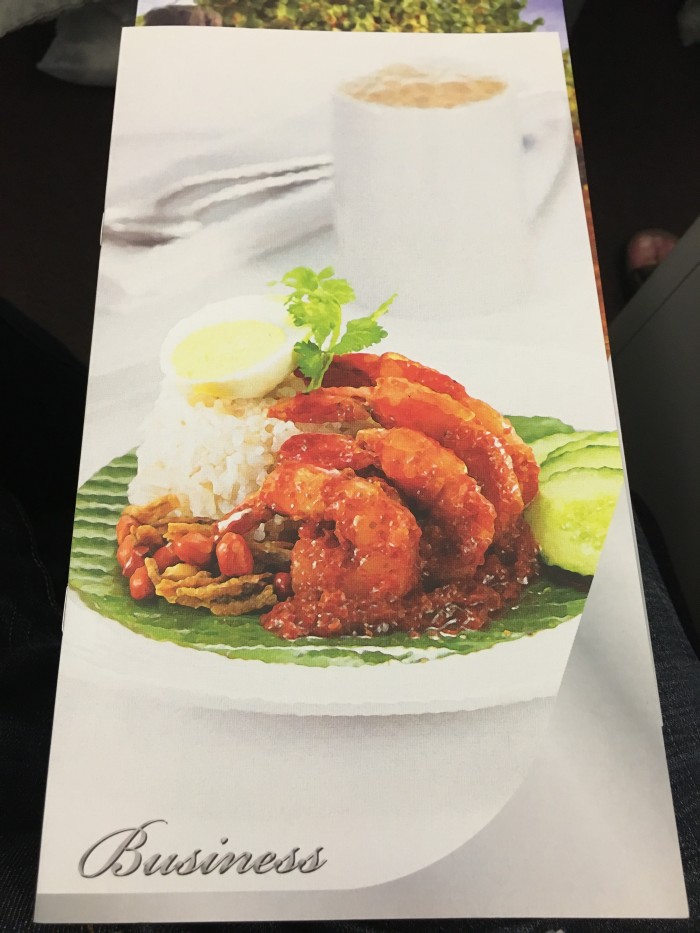 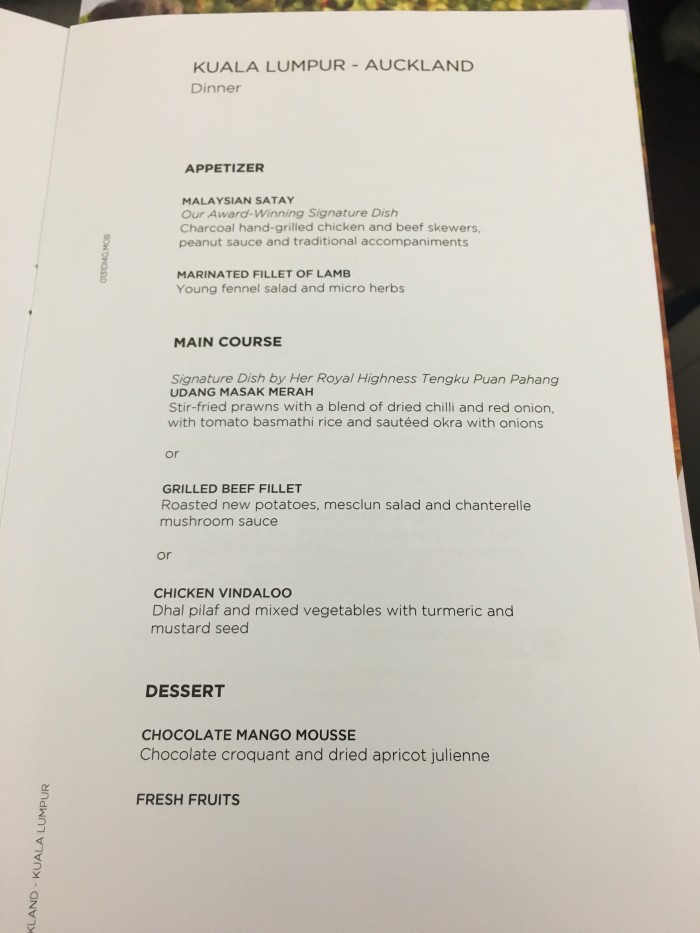 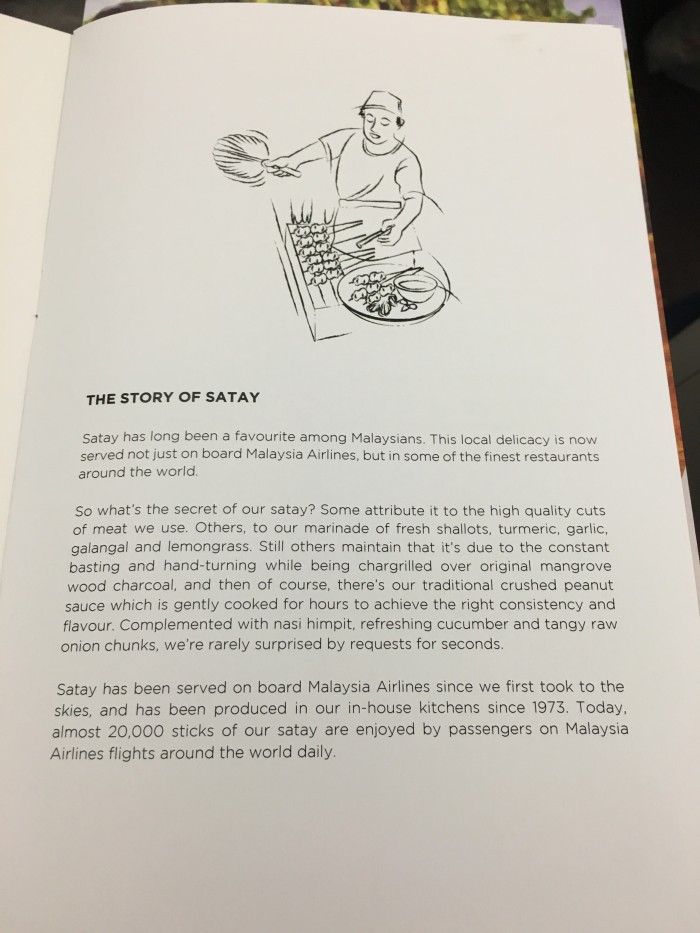 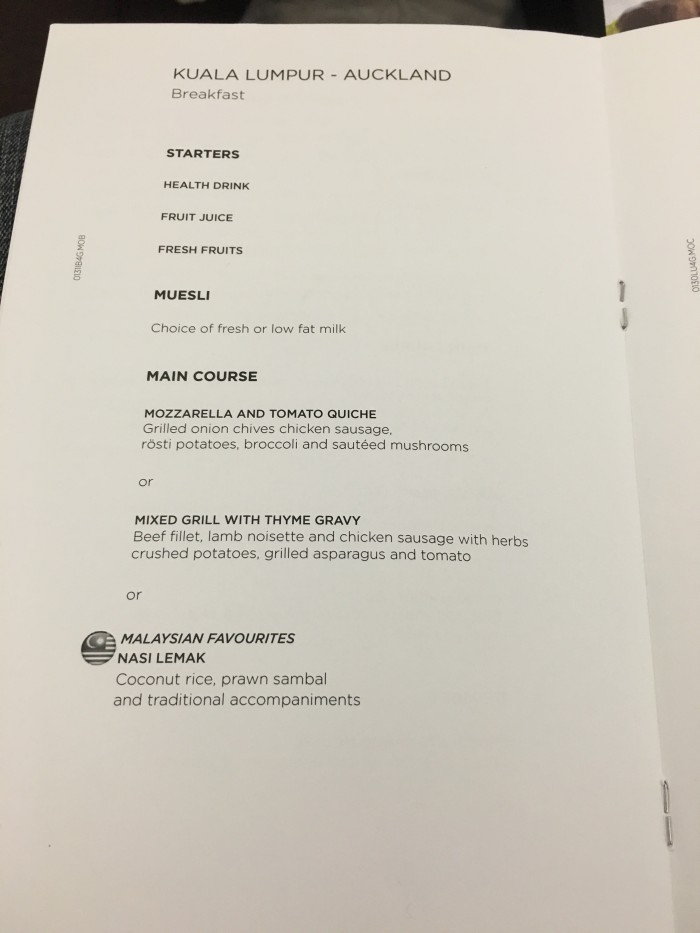 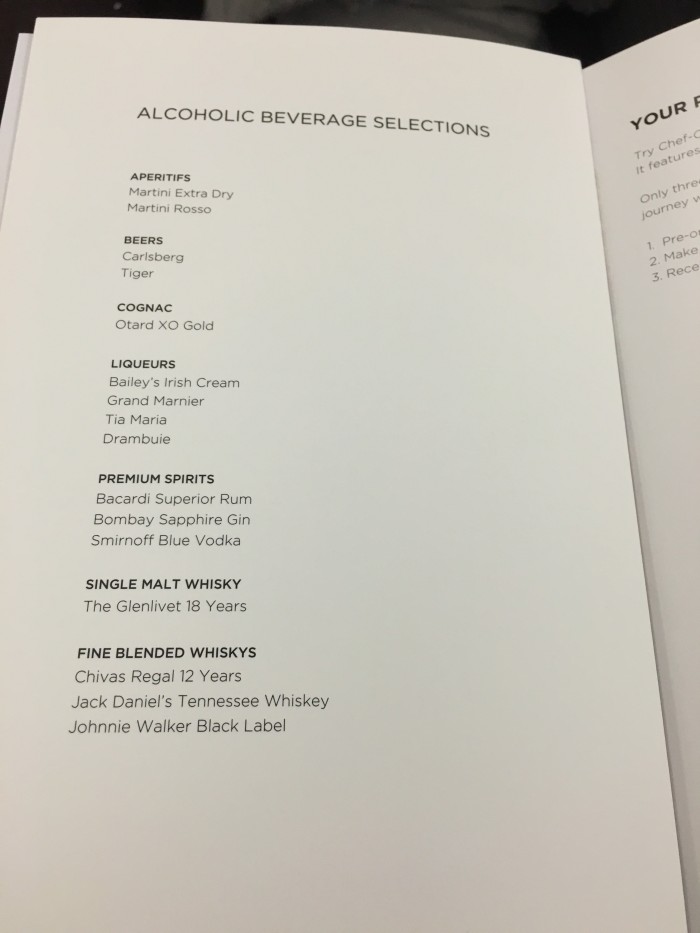 Although I was skipping the dinner, I did ask for some satay, since I’d wanted to try it. I was given a double order. No complaints here! It’s such a simple dish, but it’s one of the best I’ve had on any flight. It was as good as I’ve had in a restaurant. 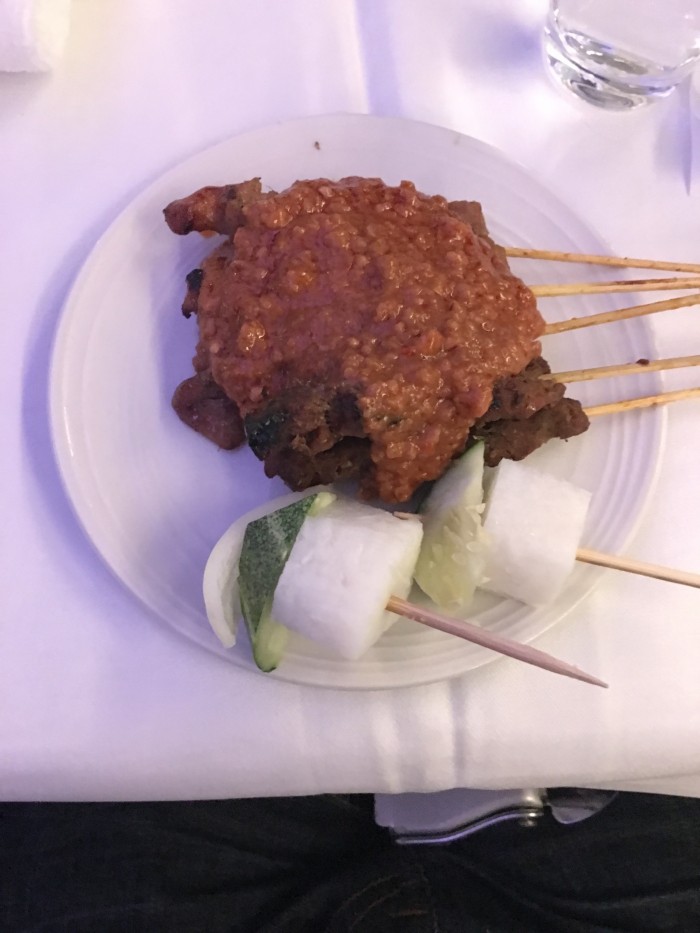 I will say though that the slight turbulence made for an interesting time eating satay. Pointy skewers and movement don’t mix particularly well.

After the satay, I went to sleep for a bit. Around three hours after we had departed, I woke up. I had eaten about an hour into the flight, so I slept for a solid two hours. It wasn’t a huge amount of sleep, but it was necessary, and sufficient to get me through the next day.

Unbelievably, a full three hours after we had departed, meal service was just wrapping up. Yes, they had stopped for a little bit due to the turbulence, but this was still slow. I was glad I had skipped most of the meal in order to sleep, even though the food had looked decent. Given what I have heard from other Malaysia flights in recent months, it’s possible that the flight attendants were a bit overwhelmed by having a full business class cabin. On my return flight from Auckland, it was only about half full.

For relaxation & sleep, the seat was angled-lie flat. Personally, I don’t have a huge problem with a slight angle to a bed, but be aware of that if that’s something that is concerning to you. 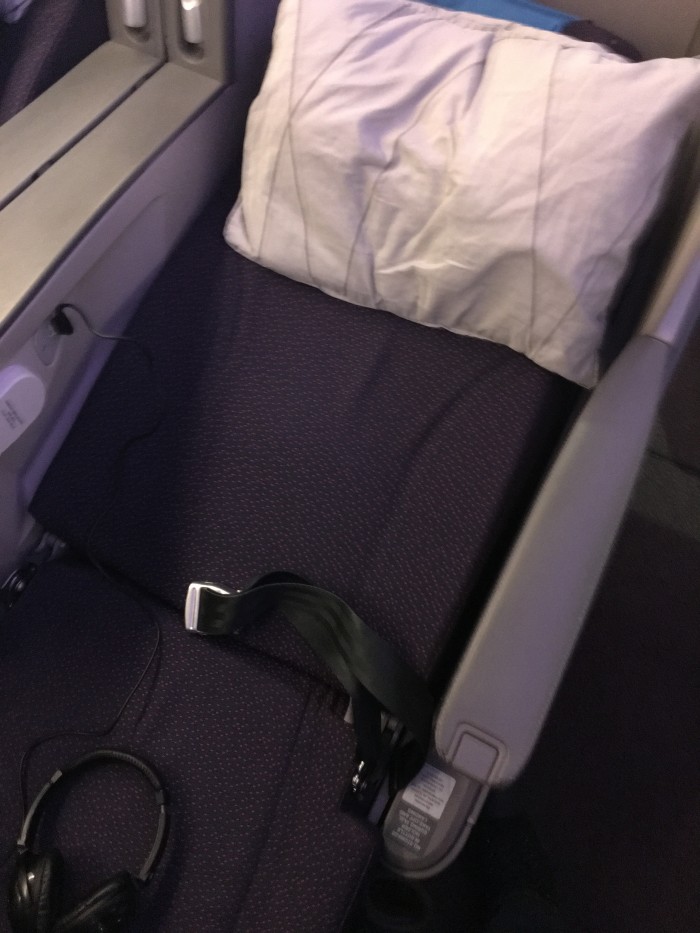 I couldn’t sleep any more, so I decided to watch a movie. For some reason, they had categorized Me, Earl, & the Dying Girl as a comedy. Judging by how I ended up unsuccessfully trying not to cry during it, I have no idea why it had been classified in this way. I enjoyed it though.

Next up was Spy. I didn’t see the appeal of it, though perhaps some of that was due to the fact that Malaysia censors some movies.

After Spy, I watched Batkid Begins, a documentary about how San Francisco came together to make a little boy’s dream to become Batman come true. I actually took part in the event that day, joining the crowds in Union Square, so it was cool to watch. Here’s a trailer for it:

I was glad I was watching movies rather than trying to sleep, as there was so much turbulence for the last half of the flight. It never felt like we were in any danger; it was just annoying.

An hour or two before we landed in Auckland, it was time for the breakfast meal service. I went for a traditional Malay dish called nasi lemak. It was delicious. Yet again, I was impressed by Malaysia Airlines’ catering & local dishes. 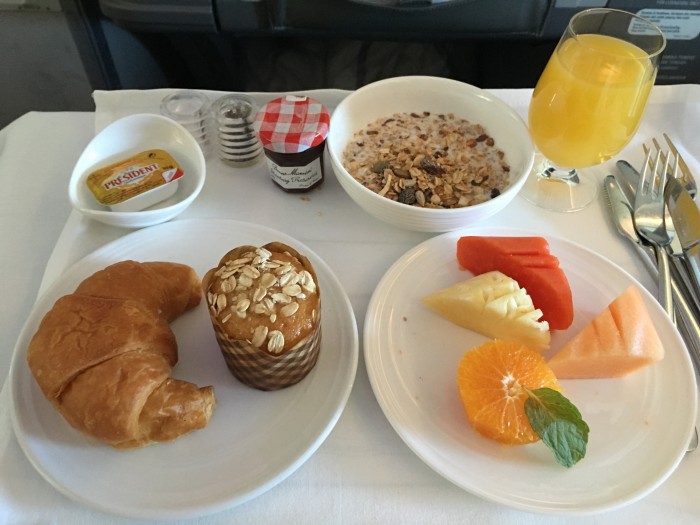 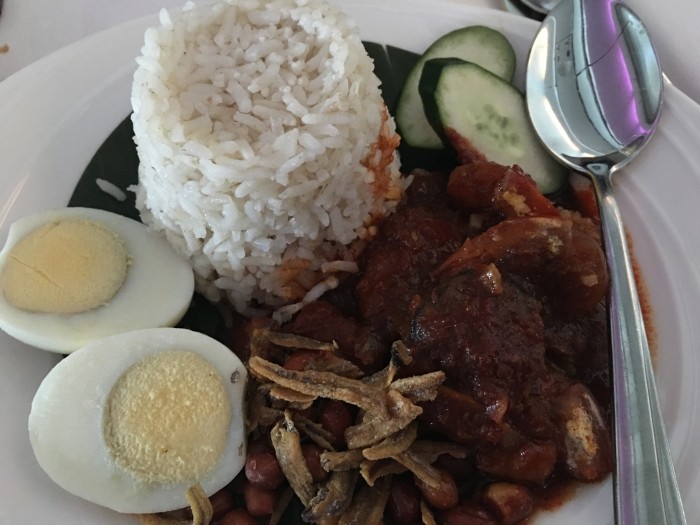 We landed in Auckland to find the arrivals hall empty, just the way I like it. AKL seems to have more than enough capacity, which is good considering how more airlines are adding flights from the United States to New Zealand. Perhaps next time I visit, I won’t go a roundabout way via Asia, though I did appreciate the bonuses such routing afforded.

It’s impossible to write about Malaysia Airlines without addressing the obvious. A lot of travelers are avoiding the airline thanks to them losing one plane, then having another shot down. It’s understandable that people would feel that way, but it’s unfortunate, as it actually is a decent airline. While my business class experience on Malaysia might not have been the best I’ve ever had overall, the service was great. The food was very good too, especially since it featured unique dishes from Malaysia. The seats could use an upgrade for more privacy, but Malaysia is addressing this with their upcoming cabin refurbishments. Despite their tough go of it recently, the airlines is trying to turn it around, and I hope that they are successful in getting passengers back.