The first long leg of my trip around the Pacific Rim was from Los Angeles to Hong Kong on Cathay Pacific. I’d flown in first class and regional business class on Cathay before, but this would be my first time in their long-haul business class cabin. Most of my award ticket on this trip would be in business class on a total of 4 different airlines. Given how excellent my experience in Cathay Pacific first class from Frankfurt to Hong Kong had been, I went in with high expectations for my flight. 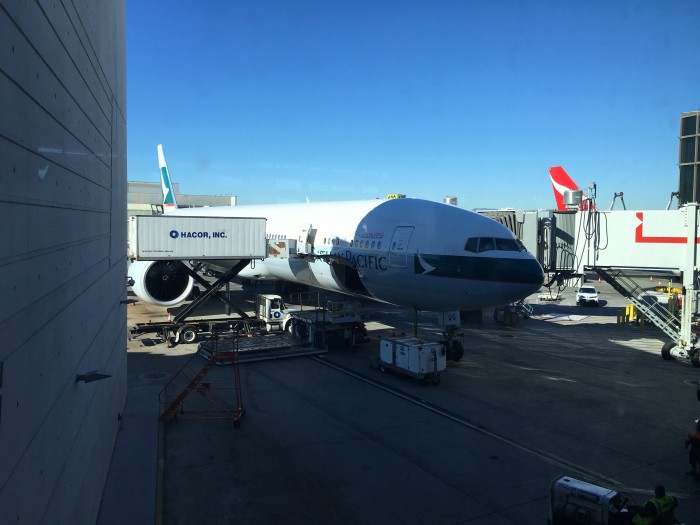 I won’t leave you with any suspense here Cathay Pacific’s business class service is great as well. They are easily my favorite airline that I have flown on so far. The cabins are great, as is their soft product.

Boarding started with a very long, somewhat chaotic line, though I was fortunately near the front, only because the line kind of formed around me. The business class cabin is pretty large, so the length of the line is not surprising. It’s not like there isn’t plenty of storage space as well, but I like to be on a plane first so I can take photos, get settled in, and start watching some inflight entertainment. 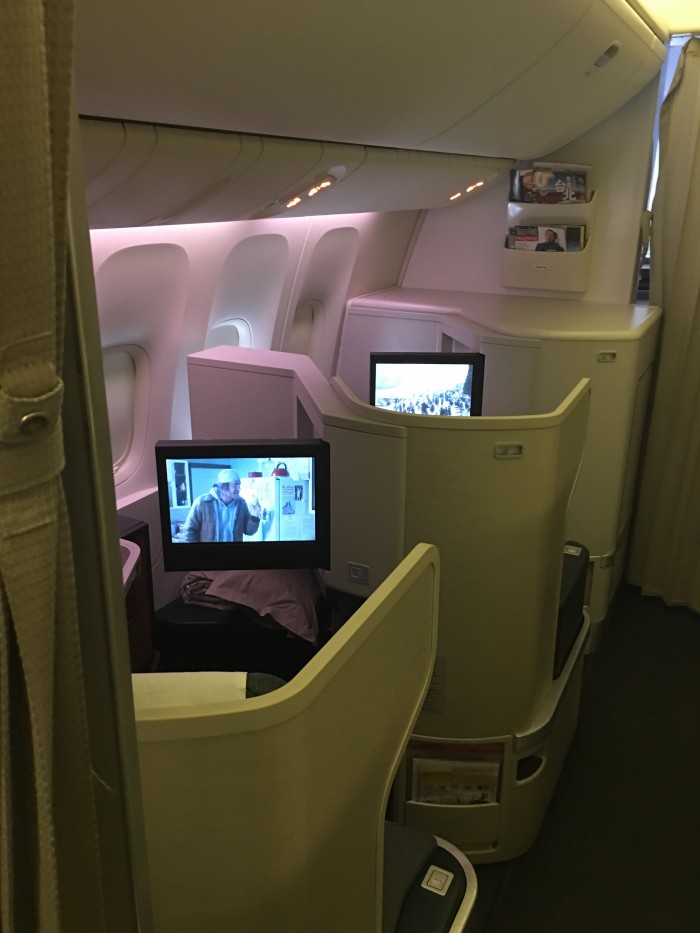 Since it was a week or so before Christmas, there was a small wreath above the seat, which was a nice little touch. 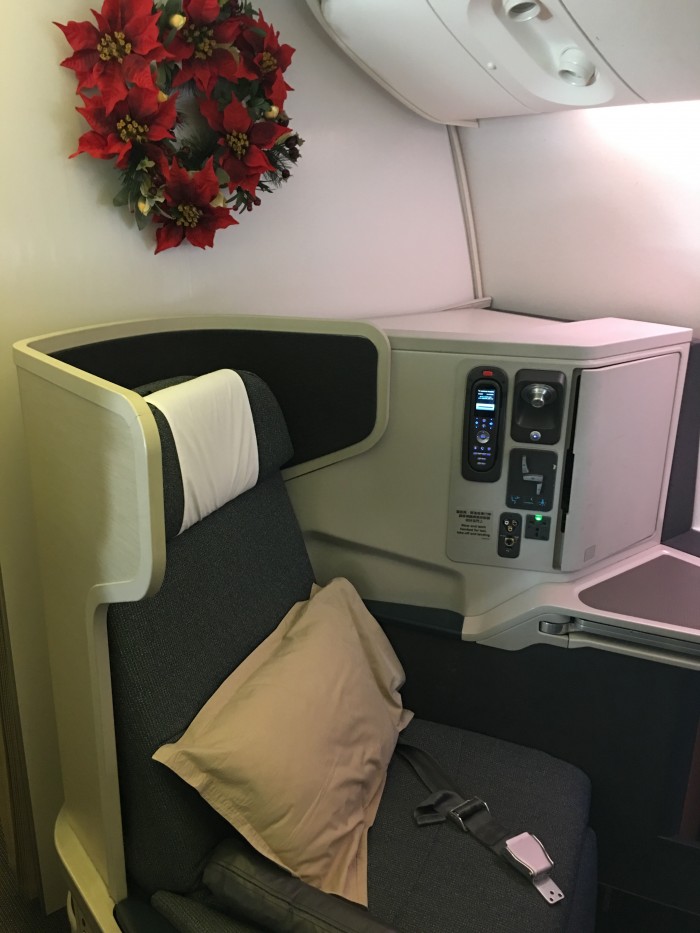 These seats seem to get served before the other business class area, which is another benefit. Also, you’re right near the exit, which is helpful if you have a tight connection or just want to beat everyone else to immigration. This came in handy when I had only about an hour and a half to make my connection in Hong Kong.

Cathay Pacific’s business class seats are very comfortable. While they are of course not as luxurious as first class, they are still plenty wide enough, especially when you are going to be in them for a 14.5 hour flight from LAX to HKG. 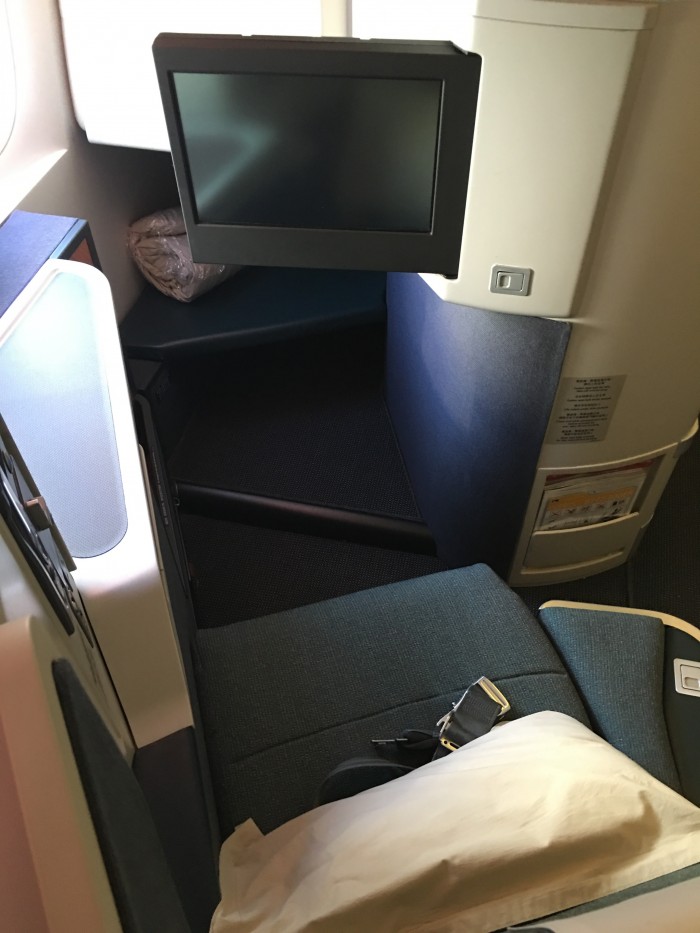 There is also plenty of legroom. I was able to stretch my legs out without touching the footrest, which is impressive for a business class seat. 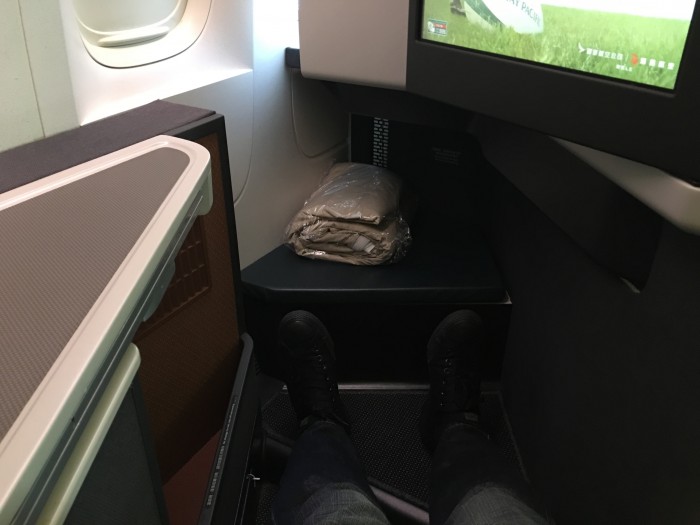 My seat had two windows, though I had to keep them closed for most of the flight since the sun was to the south of us, and I was on the left side of the plane. I wish I could have kept them open more, but it was getting warm, and there are no fans available in the cabin (a major miss, in my opinion). 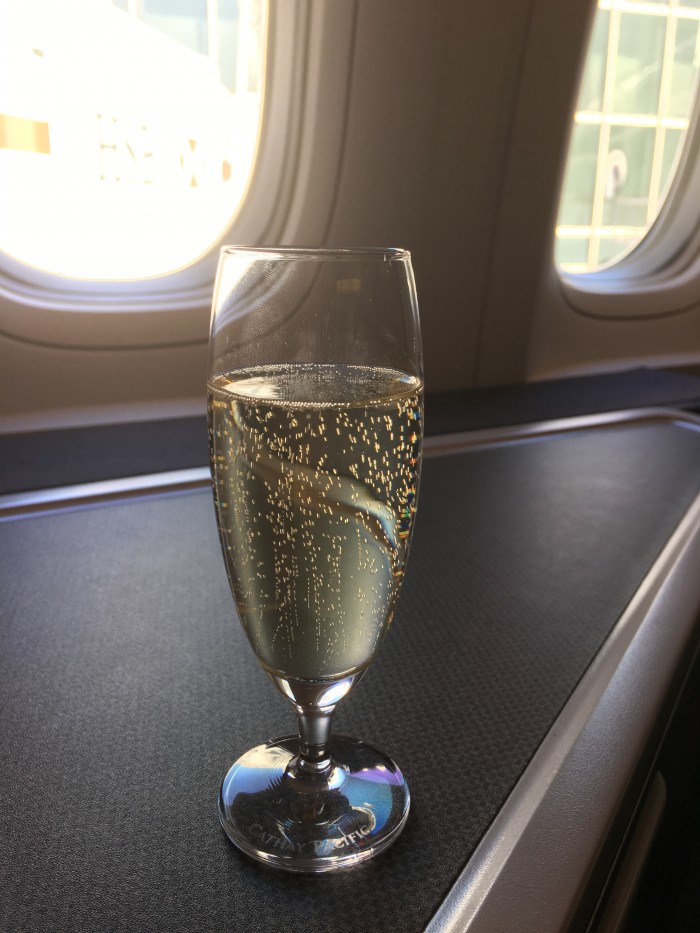 Cabin service started with bringing us pre-flight champagne, then after take-off we got water bottles and amenity kits. There was lots of storage space for everything in the seat. 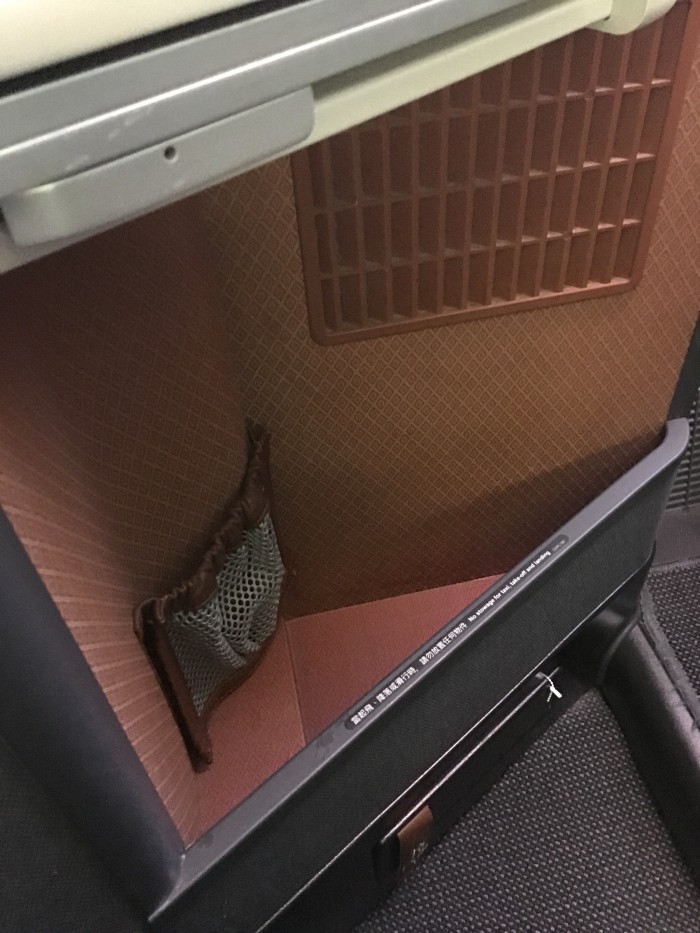 The amenity kit was from Seventy Eight Percent. Everything in it was fairly standard, though the microfiber cloth was a unique offering, plus I liked that the mini-toothpaste tube was more than single use. 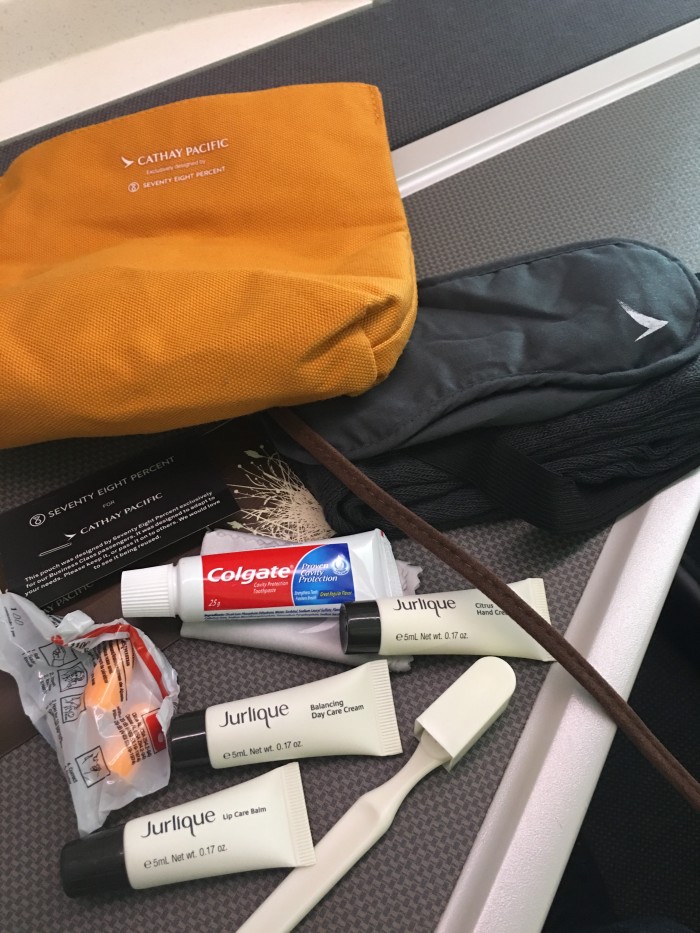 Not long after we reached cruising altitude, it was time for meal service to begin.

Here are the Cathay Pacific business class menus from my flight from Los Angeles to Hong Kong. 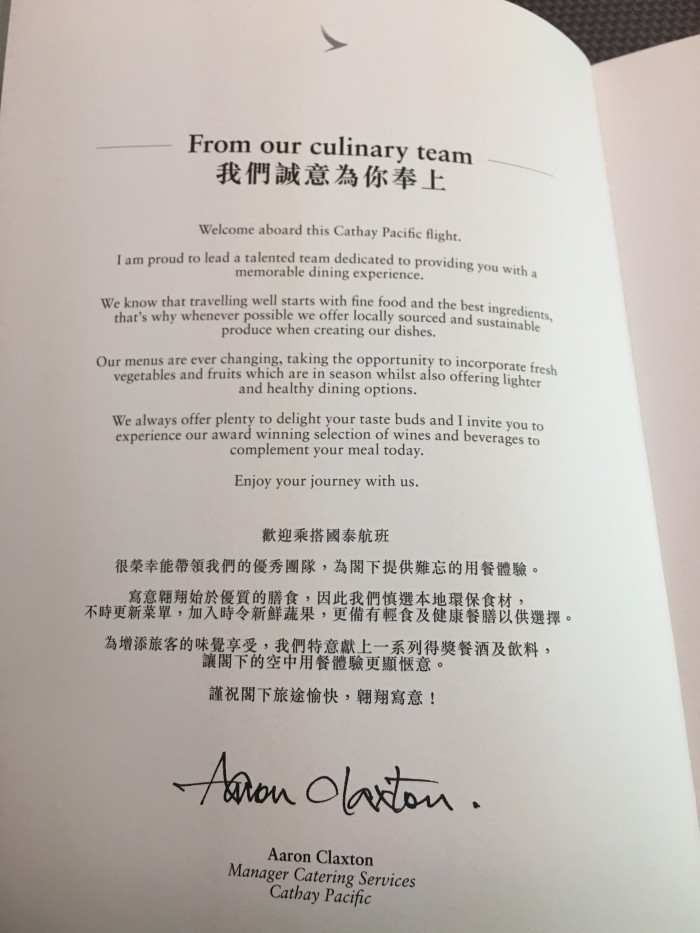 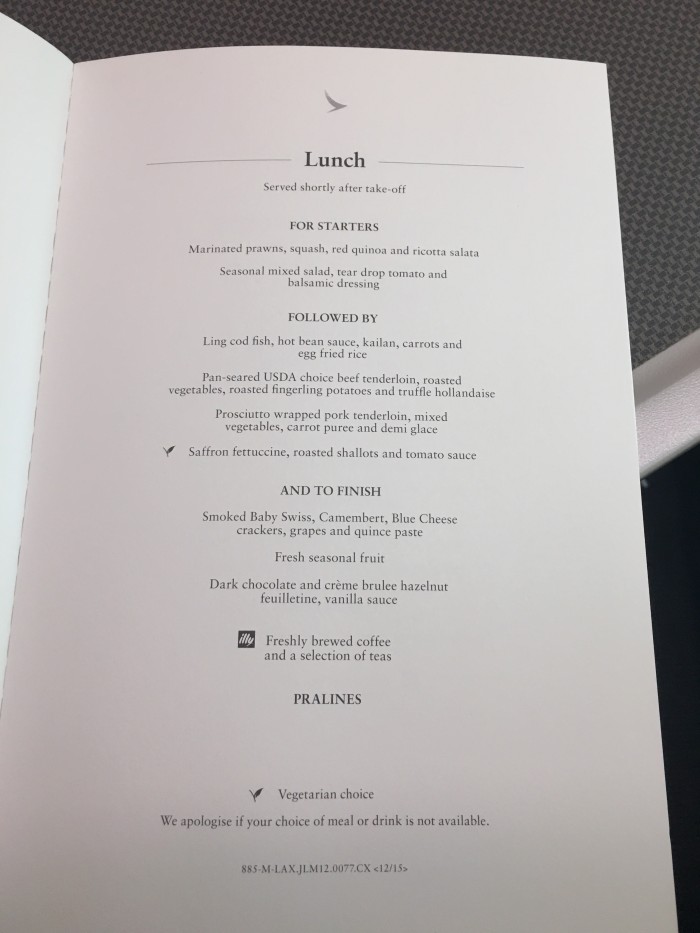 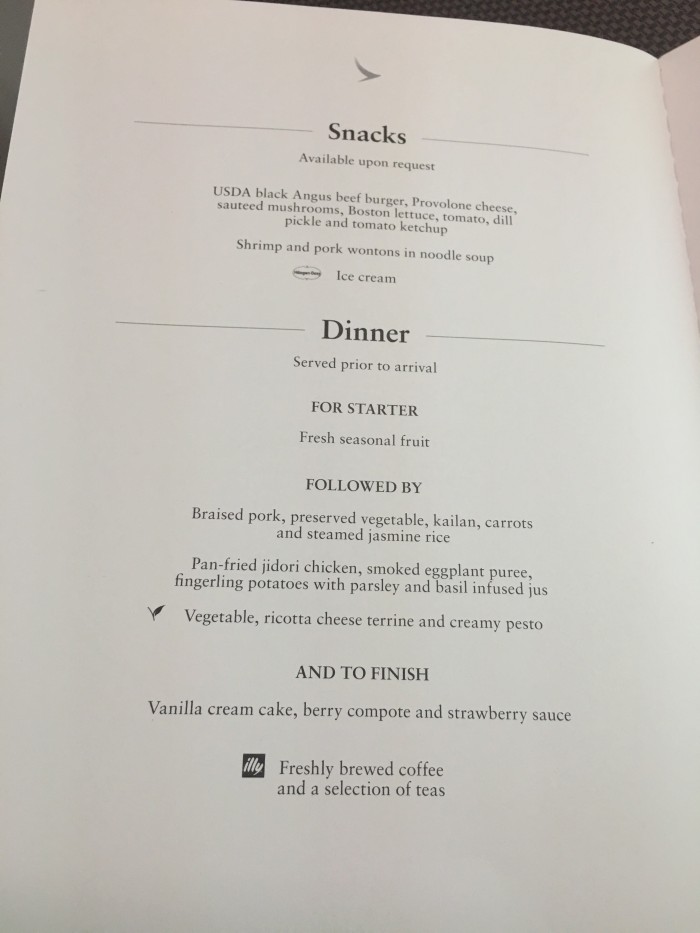 I started off with a glass of Bodega Ruca Malen Yauquen Malbec Cabernet Sauvignon, which was ok, though a bit dry and smoky.

The meal started with some cold shrimp and quinoa. The shrimp was excellent. More airlines should have it as an option, as it seems like cold shrimp can be consistently good. Of course, I had just read a couple of days prior that some of the shrimp around the world is farmed by slaves, so all I could do was hope that this shrimp was legitimate. 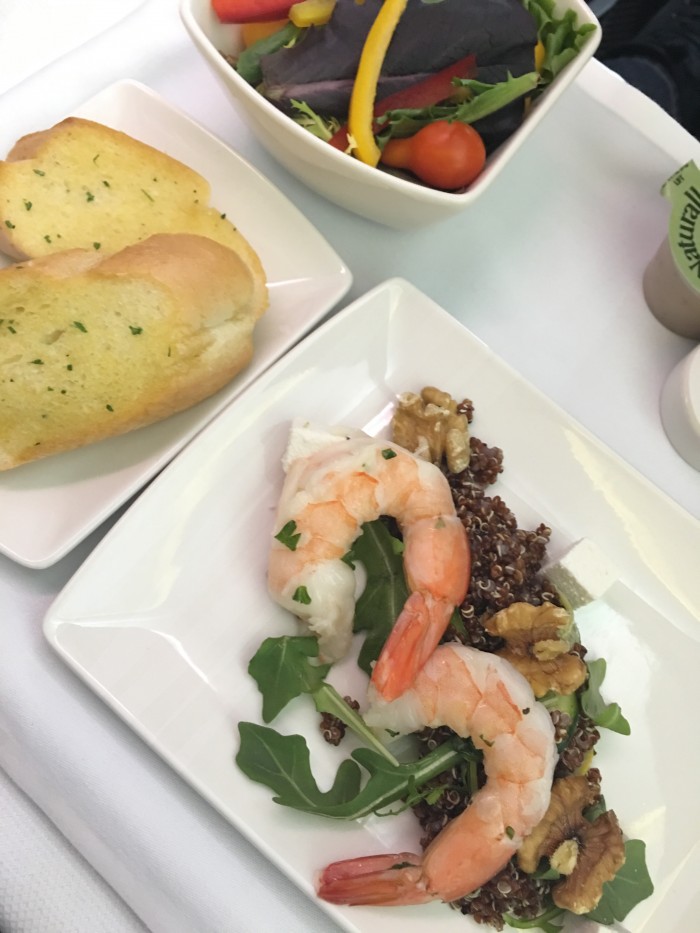 For my main course, I had pork tenderloin wrapped in bacon, which wasn’t bad at all. I like that Cathay Pacific has all of the meals out on a cart in the open so you can see what looks good. The meal came with pureed carrots, which were tasty, though they resembled baby food. 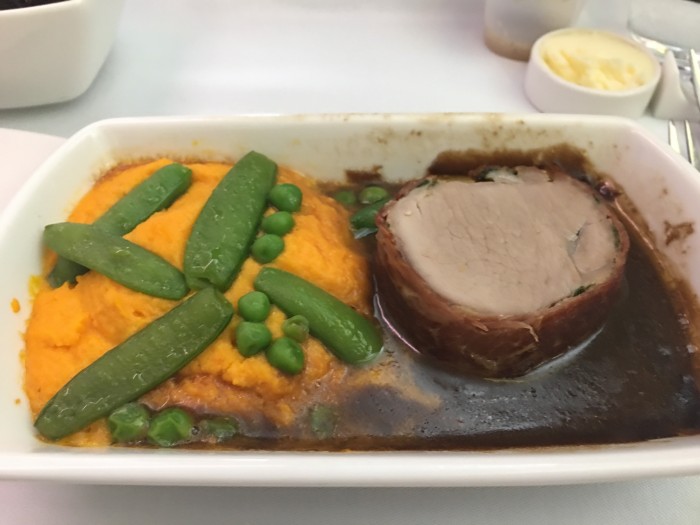 As I had my meal, there was some slight turbulence about an hour into the flight, but it didn’t last long. It certainly didn’t stop me from eating or drinking.

The flight attendants brought around a cart with cheese and fruit. They had a nice selection of each and presented them well. While I had my cheese & fruit, I finished watching Trainwreck. Being a Judd Apatow movie, it had its share of schmaltz, but overall I liked it, since I’m a fan of Amy Schumer. 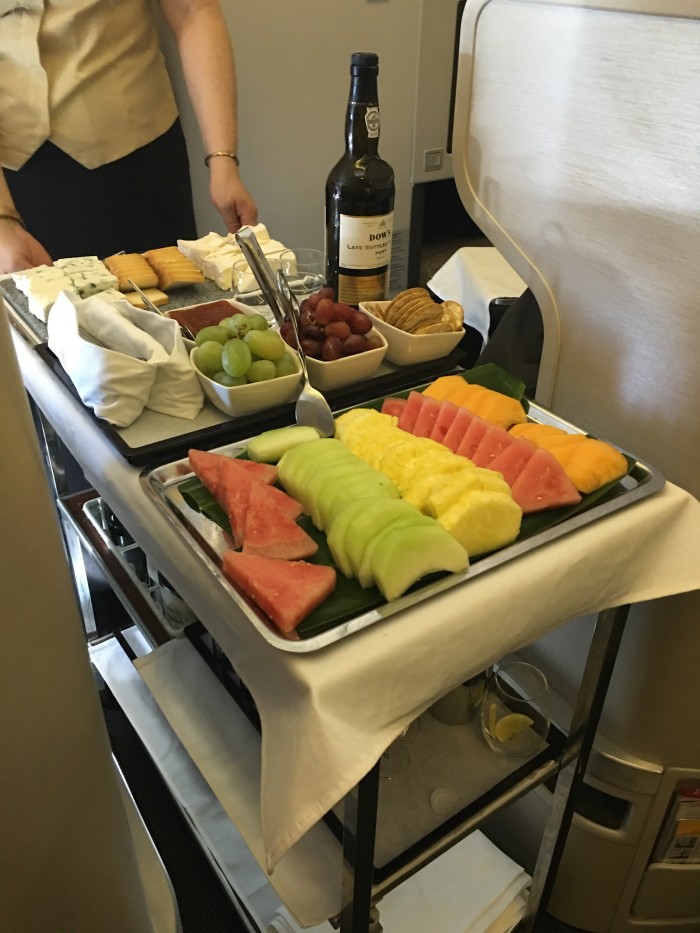 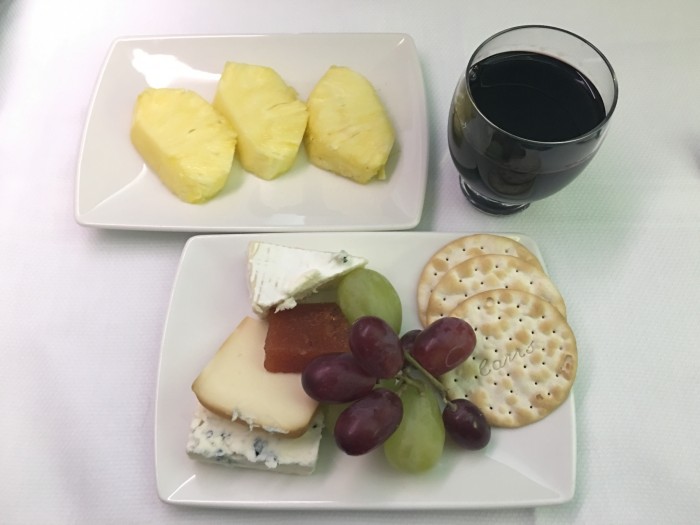 The cheese & fruit wouldn’t be my only dessert. After that, it was time for a chocolate dessert, served with more port. I liked that the flight attendants had port on the cart with them for both the cheese & the chocolate. Normally I have to ask to get it separately, since it’s not always a popular drink. They even had proper port glasses to serve it in. 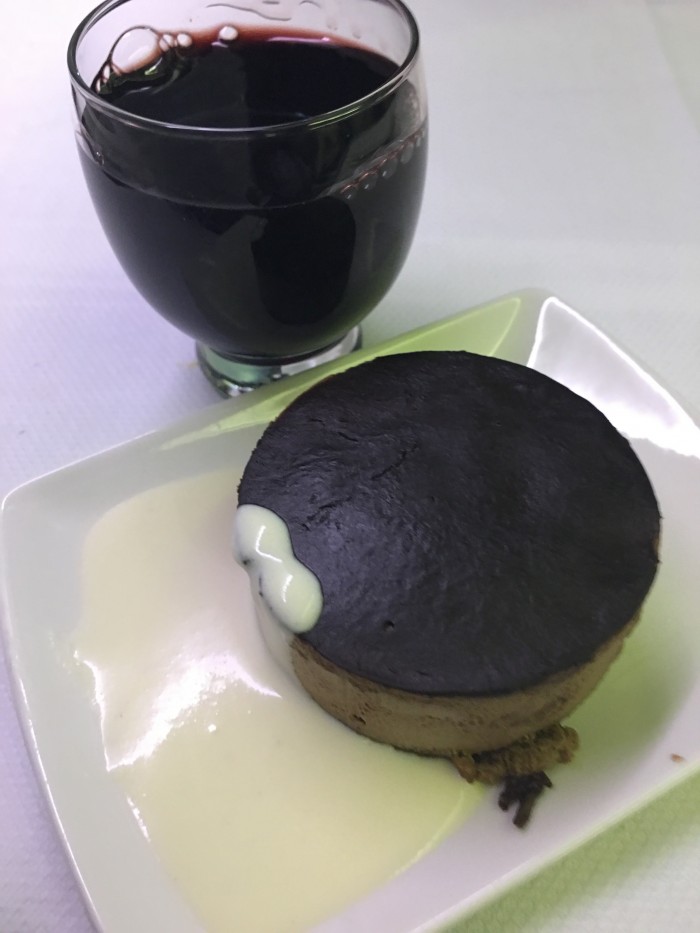 In case that wasn’t enough chocolate, the flight attendants then brought around a box of chocolates. I had a nice sea salt caramel to finish my meal. 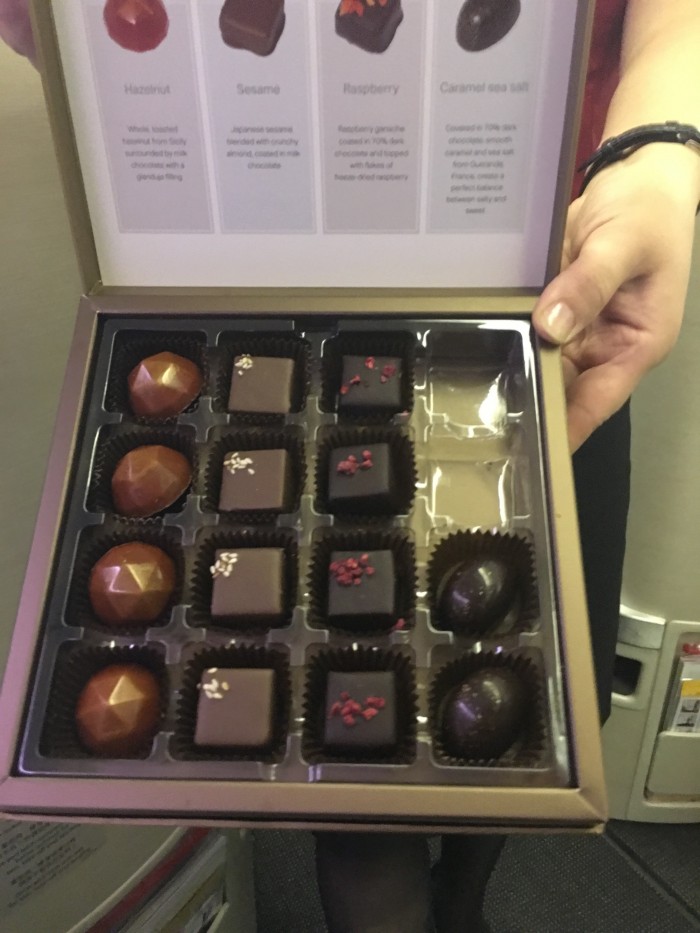 By this point, I was watching The End of the Tour, which is about the great David Foster Wallace. It enjoyed it more than I thought I would. Mostly for the music, but I thought it was reasonably interesting.

After it was done, I slept for an hour or so, but given the time, I wasn’t ready for much more than a nap. I watched Bridge of Spies after that. It was fine; a perfectly adequate movie to watch on a plane.

About six hours into the flight, I ordered a bowl of the wonton noodle soup. It’s a delicious way to stay hydrated on a plane. 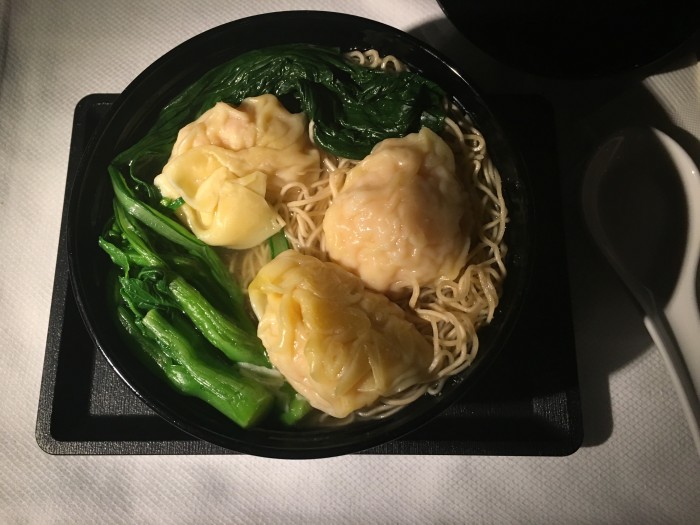 I was very impressed by Cathay Pacific’s inflight entertainment selection on this flight. In addition to some pretty good movies, they also had entire seasons of TV shows. I always find it interesting when airlines show random episodes of shows that have running plot lines. It’s one thing to have random episodes of a comedy, but who wants to start a drama series with the 3rd and 4th episodes of season 2? They had the entire season of Humans, which was actually sitting on my DVR at home anyway, so I watched most of that for the rest of the flight. It’s an interesting show, especially if you like that realistic, near-future sort of sci-fi. The only improvement Cathay Pacific could make is to offer better headphones, such as the Bose noise-canceling headphones that American Airlines has. 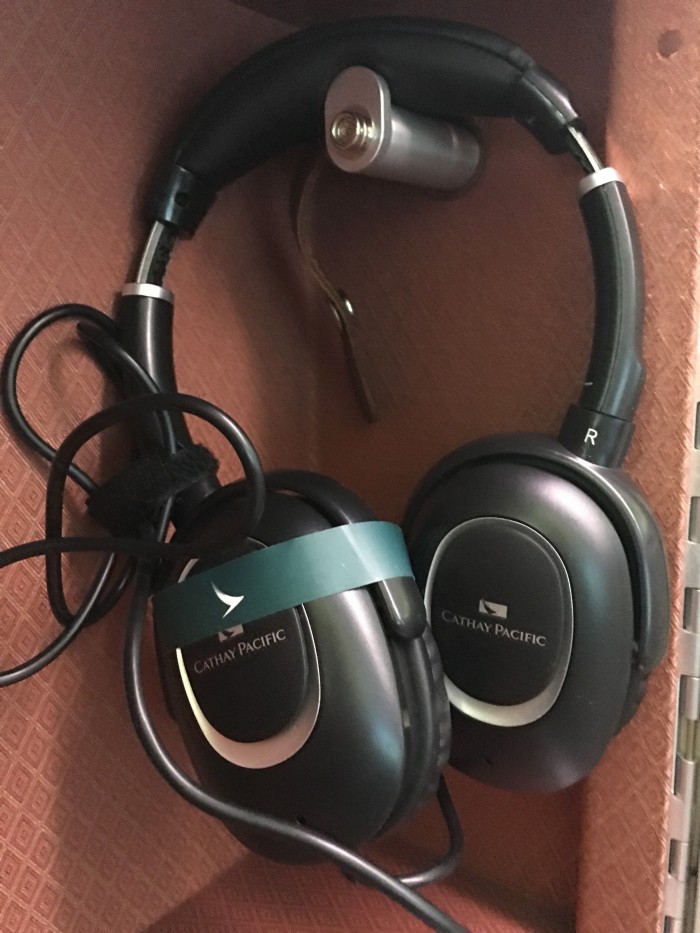 A little bit before landing there was another meal service. There was pork belly and rice with fruit, more garlic bread, and a nice, light cake. I was only slightly hungry, and I knew I had another flight coming up, so I didn’t have all of it, but it was all decent. 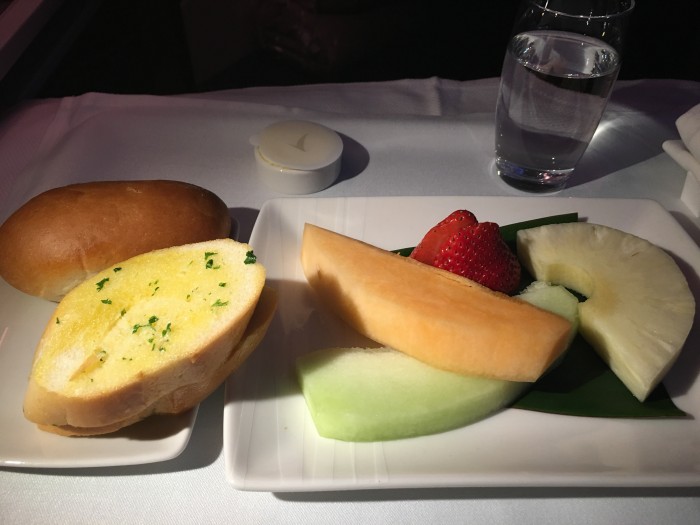 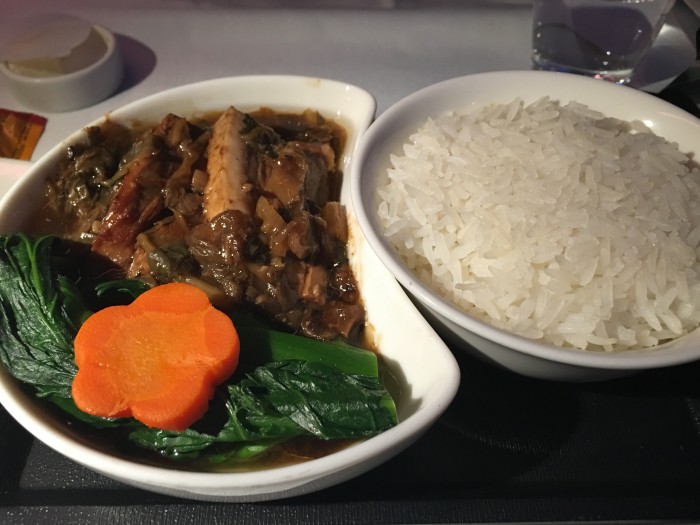 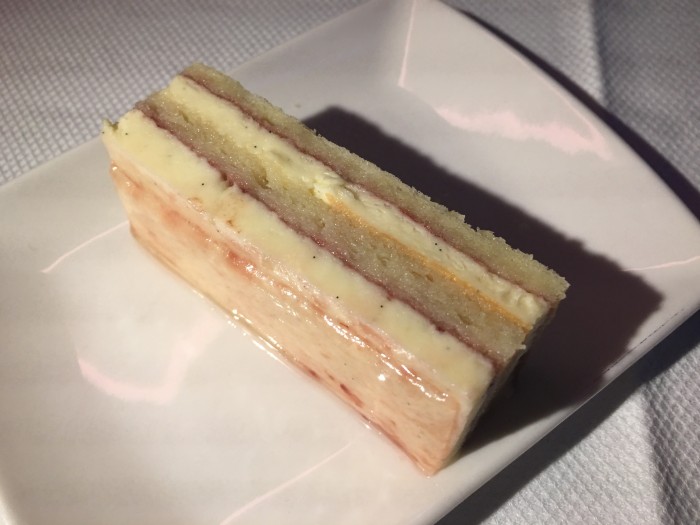 After a long 14.5 hours, we were finally heading into Hong Kong. We were slightly delayed, which meant that my already-tight 1.5 hour connection for my next flight to Kuala Lumpur would be even tighter.

Yet again, Cathay Pacific impressed me with this flight. The service was always friendly, but not in an over-the-top manner. The seat is one of the best business class seats in the world. The food was very good, and the inflight entertainment was one of the better selections I have encountered. I wish I had more opportunities to fly on Cathay Pacific because I’ve enjoyed every flight I’ve been on with them.