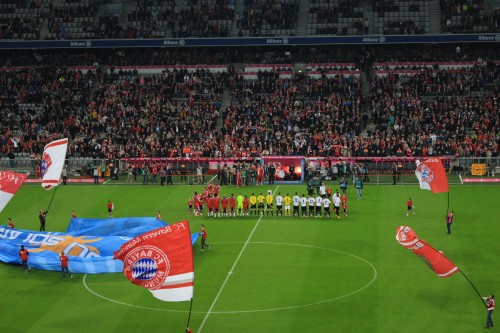 If you’re looking to experience life as locals do when you’re traveling, one good way to do that is by attending a sporting event. Whenever I’m traveling in the U.S., I try to visit new baseball stadiums. When I was in Australia, I attended a rugby match in Sydney. When I was in Munich, I figured it would be a great opportunity to see one of the best soccer teams in the world. Attending a Bayern Munich match was an absolute must when I was in Germany.

There was only one problem with that: Getting tickets to a Bayern Munich match can be very difficult.

This difficulty stems from several causes: One, Bayern Munich is damn good historically, having won 27 Bundesliga titles through 2018, including each of the past six seasons. Two, the current side always features popular world-class players. Three, fan friendly policies in all of the Bundesliga mean that attending games is very cheap, so tickets are tougher to find. As a result, tickets for Bayern Munich’s entire season had already sold out before the first match was even played.

How to get Bayern Munich tickets

Fortunately, there’s still a great option out there to buy Bayern Munich tickets at good prices. The team operates its own secondary market where fans can sell tickets to each other in a secure fashion with no markup aside from transaction fees. This was how I was able to buy a ticket with a great view only a week before the match (the fact that the match was also against newcomers SC Paderborn helped, but tickets are available for all matches on their marketplace)

If you want to buy Bayern Munich tickets, the easiest way is through this link to their reseller market: https://tickets.fcbayern.de/Internetverkaufzweitmarkt/start.aspx

One caveat is that the site is only in German. I suggest using Google Translate to translate the page.

Once you click the link, you should see several Bayern Munich matches listed: 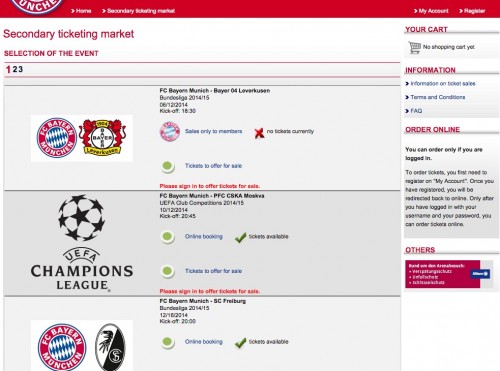 Note that some of the matches say “sales only to members”. Unless you are a club member, you won’t be able to buy tickets for these Bayern Munich matches yet. That said, it appears that for most matches the ticket sales open up to the general public anywhere from 2-10 days before the match, so be patient. When I bought my ticket, the sales opened up about a week beforehand. At the time of this writing, you could even buy Champions League tickets for a match the following week.

In order to buy tickets through the Bayern Munich secondary market, you will have to register for an account, and then log in. Links to do this are in the upper right corner of the site.

Once you have done this, you will then see links to buy online, provided tickets are available.

Click the link, and you will then see a list of all tickets available for you to buy, along with an Allianz Arena seating map so you have an idea of where each seat is located. 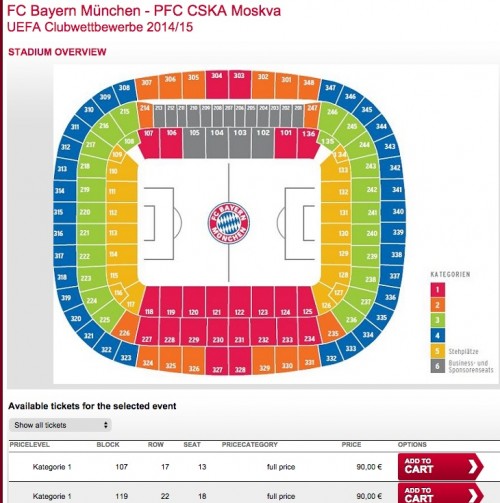 From here on out, ticket purchasing is what you’d expect anywhere else. You can print tickets at home, so there’s no need to worry about anything being shipped from Germany if you live elsewhere. I was able to buy a ticket while I was in Garmisch-Partenkirchen, then printed it at my hotel. Since it had been sold officially through Bayern Munich, I wasn’t worried about it being a scam as I might have had I booked on some 3rd party site.

Now for the match itself. 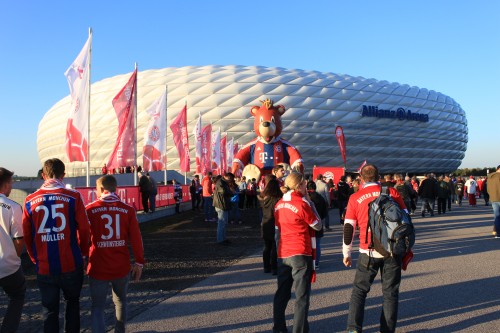 Getting to Allianz Arena is easy. Just take a U-Bahn subway train to Fröttmaning. In my case, I was coming from my Airbnb. From there, it’s about a 15-20 minute walk to the stadium. Along the way, you’ll pass Bayern Munich fans having pregame beer and food, as well as merchandise stands. One thing to note is that if you want to purchase anything inside Allianz Arena, you have to put money on an Arena Card. This is probably not an issue for season ticket holders, but be careful about putting too much money on a card if you are only there for one match, since it’s not easy to get the money back if you don’t spend it all.

I got to the match early so I could wander around, but I was far from the first person there. The general admission section of fans behind one of the goals was there even earlier, and they were loud. The fans there sang songs, chanted, waved flags and cheered non-stop for the entire time they were in the stadium, contributing to a fantastic atmosphere for the match. 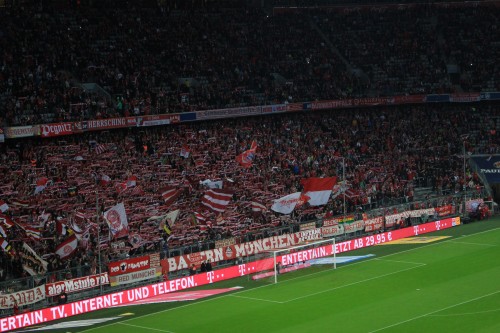 Also contributing to the atmosphere was the fact that Bayern Munich destroyed SC Paderborn by a score of 4-0 that day, and it honestly could have been even worse.

Here are highlights of the match, along with more photos I took: 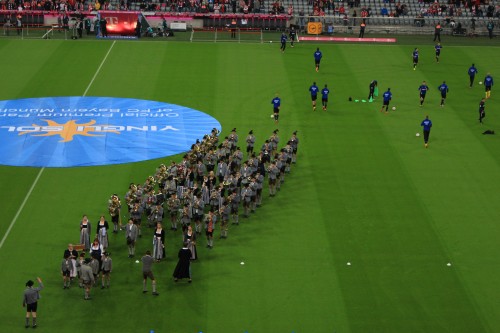 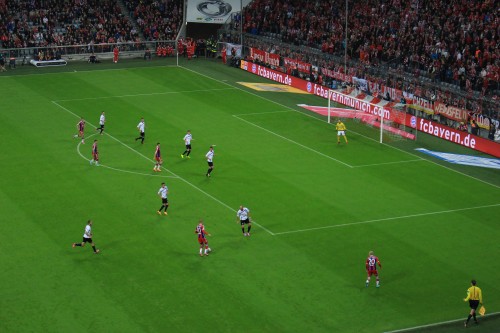 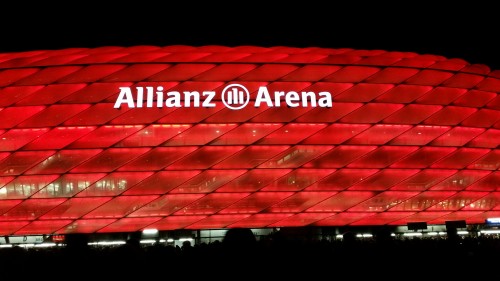 I had a great time watching Bayern Munich play, despite my cold. If you’re ever in Munich, I highly recommend looking into getting tickets and going to a match so you can experience it yourself. Having the opportunity to attend a Bayern Munich match was one of the highlights of my trip.