After visiting every lounge I could in Terminal 3 at London Heathrow (Cathay Pacific, British Airways, American, and No. 1 Traveler), it was finally time to board my flight back home. Miraculously, I’d managed to book a saver level business class award ticket on American Airlines from London to LAX. This is American’s longest business class flight to Europe, and rarely is there any saver award availability. Somehow, I’d managed to do it both on the way to Europe as well as the way back. For this flight, I would be in Business class on a Boeing 777-200 from London Heathrow LHR to Los Angeles LAX. 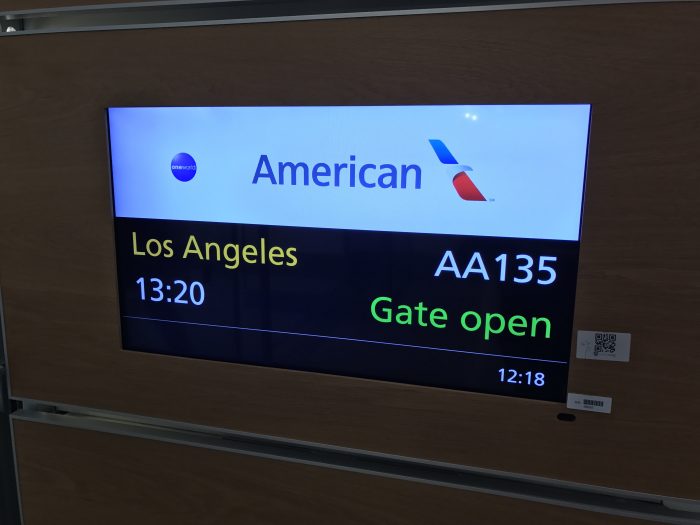 On my flight in the other direction, I described the seat & seating arrangement in American’s Business Class cabin on these particular Boeing 777-200s with the Zodiac retrofit. I won’t go into the full details here, but getting a good seat is tricky. This time, I was in seat 1L. I’d chosen it so I could see just how bad the issues with the attached seats are. I don’t normally sleep on east-to-west transatlantic flights, so I knew this wouldn’t interrupt my sleep. 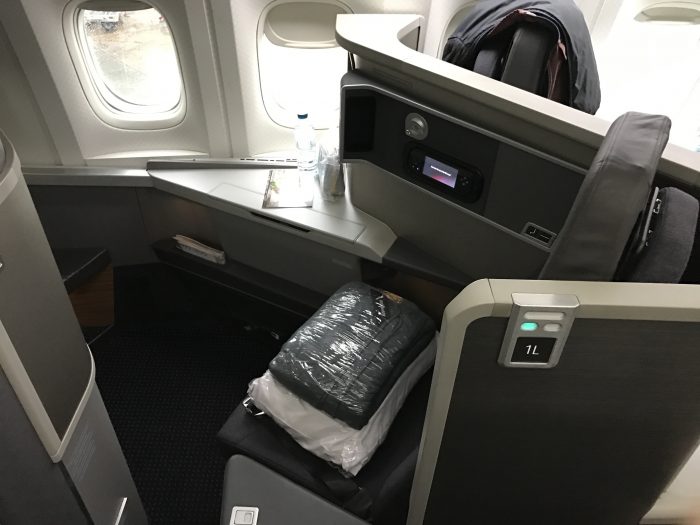 The individual seats themselves are just fine. There’s a good amount of space & privacy. However, as reports have said, the fact that American chose seats that are connected in sets of two in is moronic. If the other person moves, you do indeed feel it through your seat. I am going to be traveling on an American Boeing 777-200 again soon, and I have already made sure I selected one of the only front-facing seats that is not attached to another seat. Despite being closest to the main cabin, seats 12A & 12L are otherwise your best options. 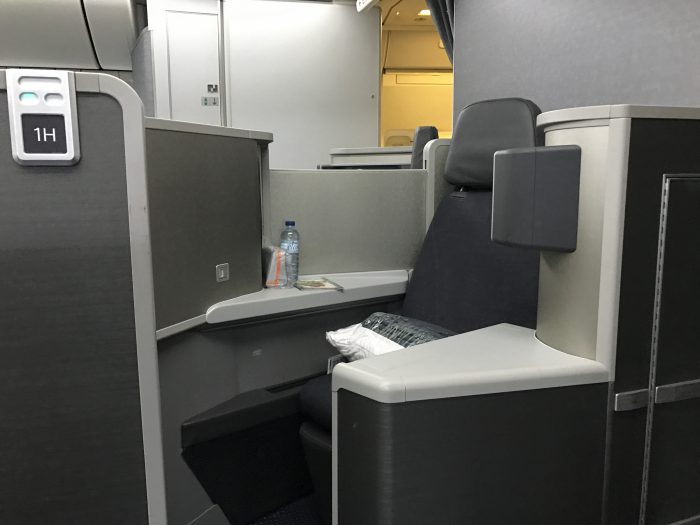 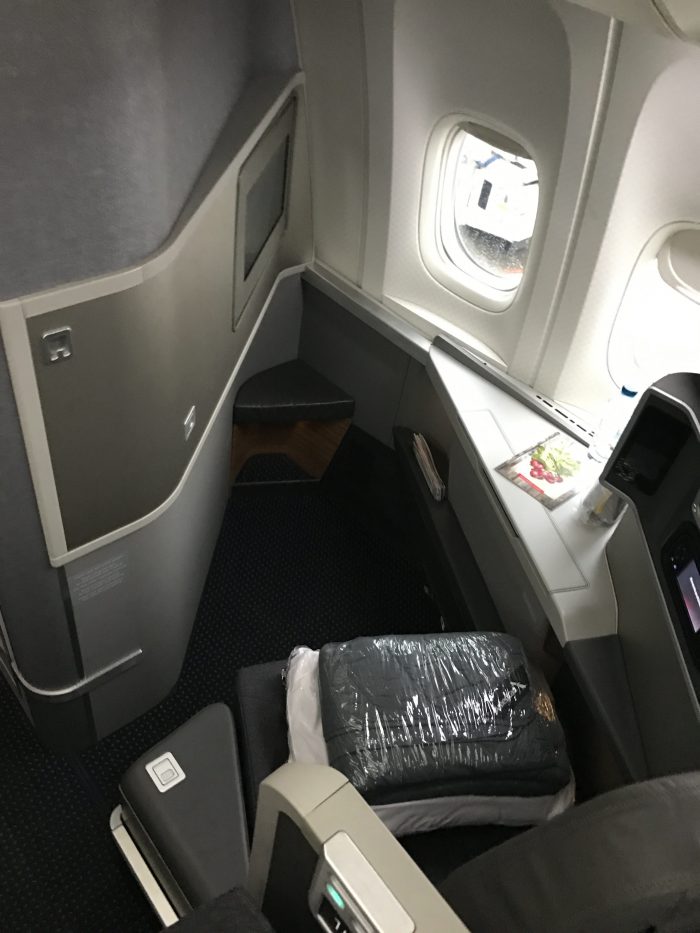 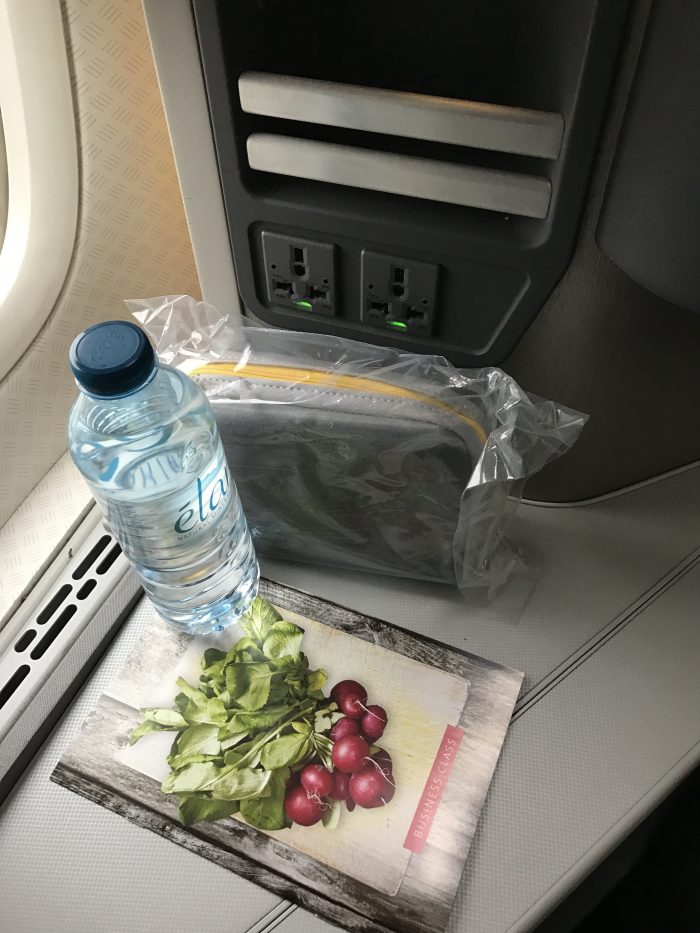 It’s a shame that American has made getting an ideal seat such an ordeal. Most travelers aren’t going to take the time to research which seats they should get. And even if they do, this can backfire. For example, the middle seats in Business class on American’s Boeing 777-200 refurb are theoretically the best places for people traveling together to sit. However, some of the dividers are up, and some are down, and they can’t be changed. As a result, people end up being unable to see each other during a flight. I have no idea why anyone would think making these immovable is a good idea.

Layout issues aside, American’s overall business class experience was solid. All of the flight attendants were friendly, particularly Nanette, who gave me a second glass of sparkling wine pre-departure because she hated to see it go to waste. I can appreciate that sort of sensibility. 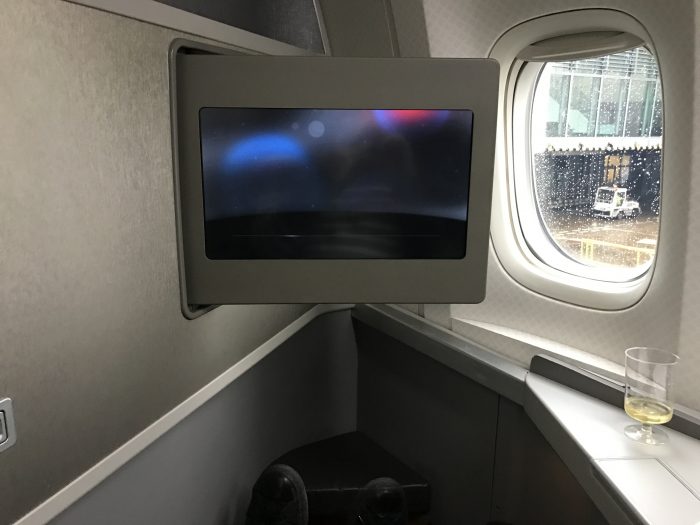 It was raining as we departed London Heathrow, but we left on time. 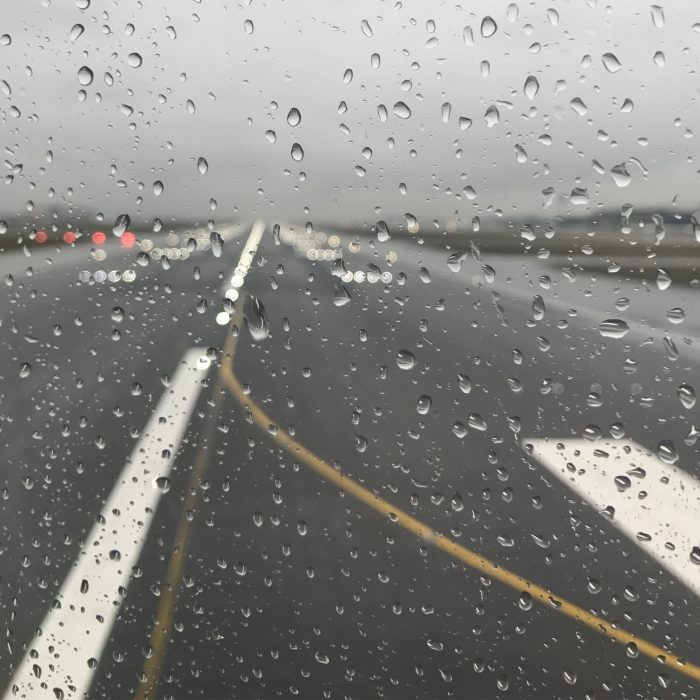 Here are the business class menus for this particular flight on American from London to Los Angeles. 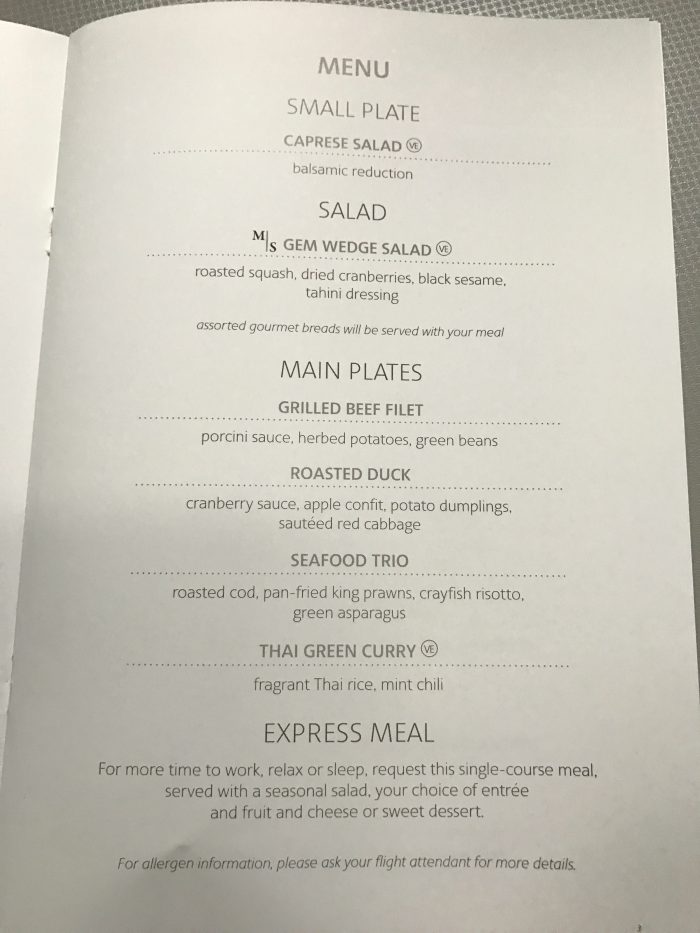 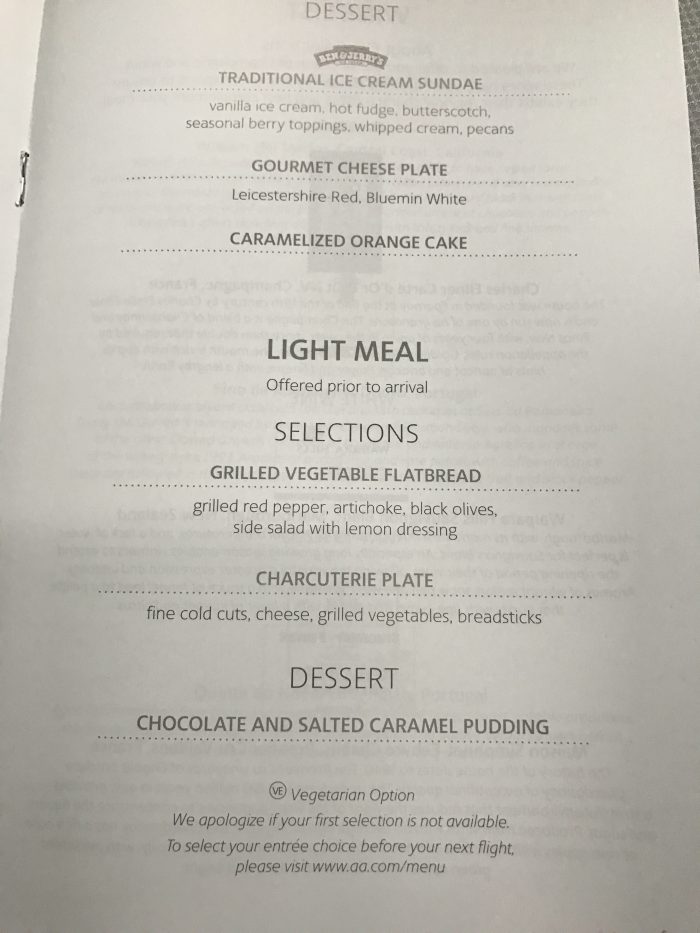 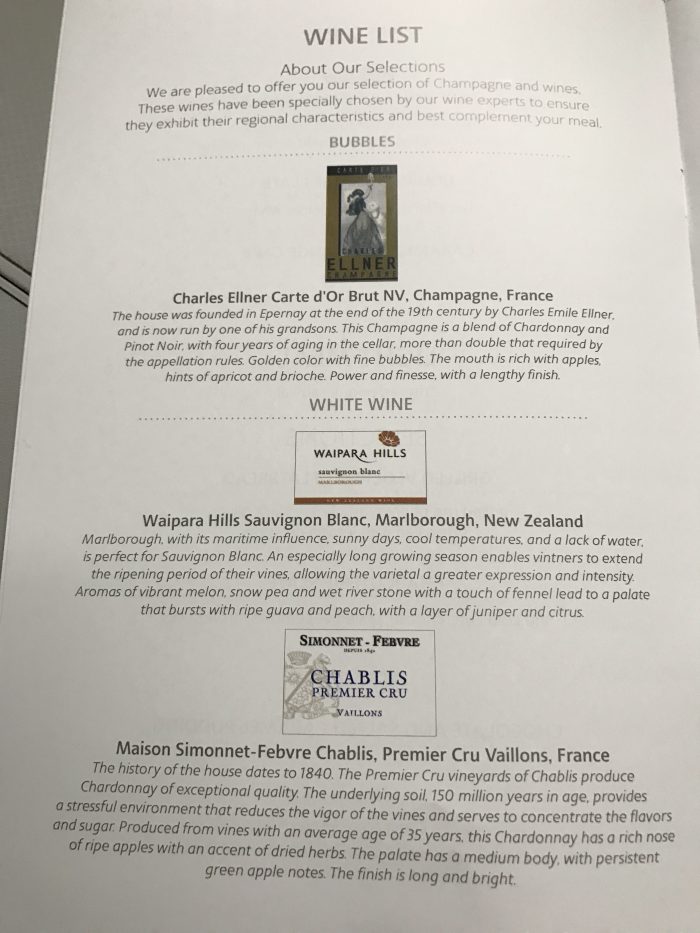 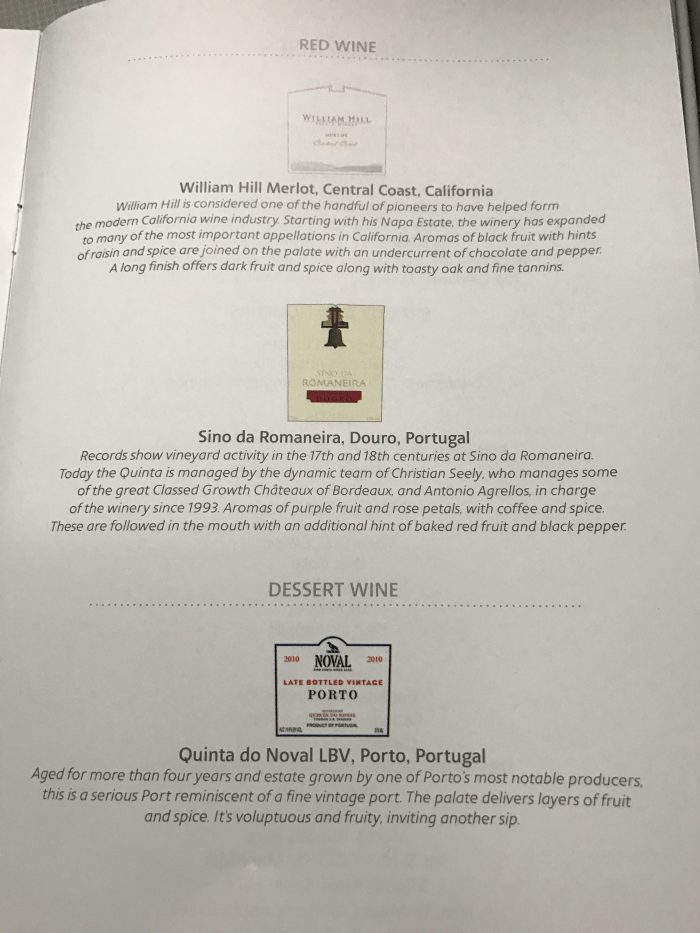 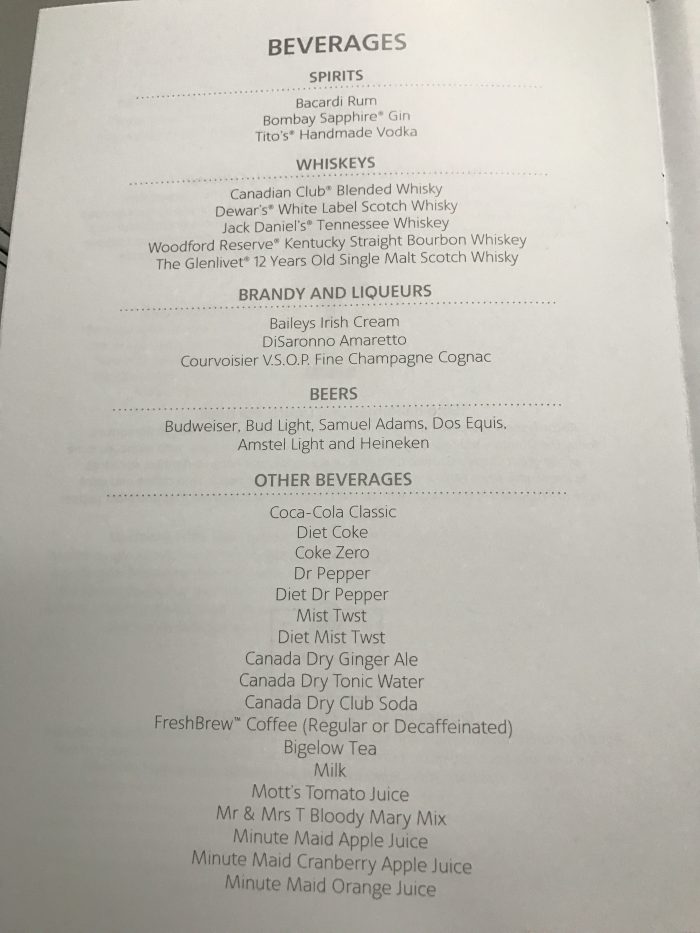 It was a tough call between the seafood and the duck, but I went for the duck since I’d never had it on a plane before, and it seemed somewhat seasonally appropriate.

Meal service started with a caprese salad, which had way too much tomato and not enough cheese. Of course, given my feelings about tomatoes, any amount of tomato is too much tomato. I just want to be served plates of cheese.

The gem wedge salad was unimpressive as well. 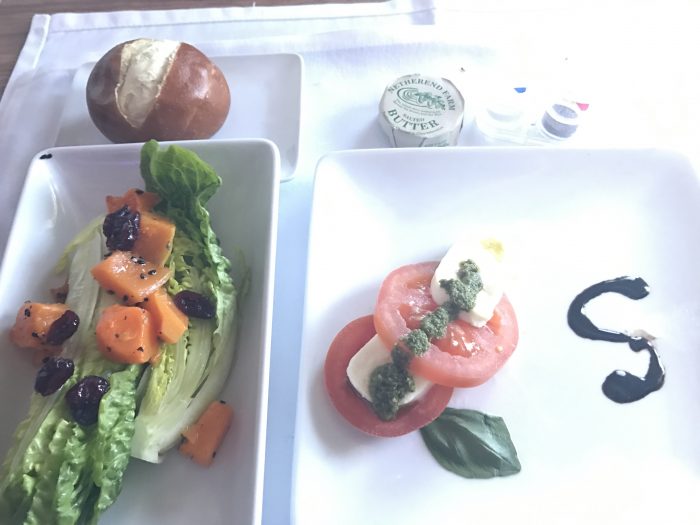 The duck was a little bit tough, but otherwise was tasty. It’s tough to cut anything with the butter knives you are given on planes. 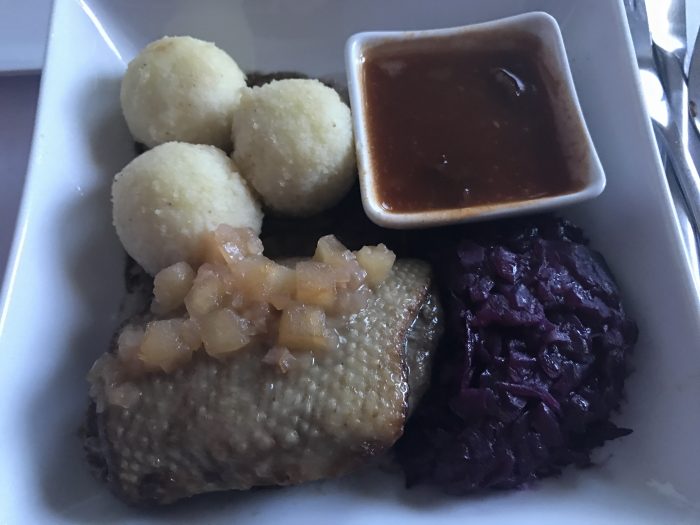 For dessert, I opted for the cake, even though I normally get ice cream. I had told Nanette that I was debating between the two, but went for the former, along with a glass of port. Unfortunately, there wasn’t any port available on the flight, so Nanette made it up to me by offering me both desserts. 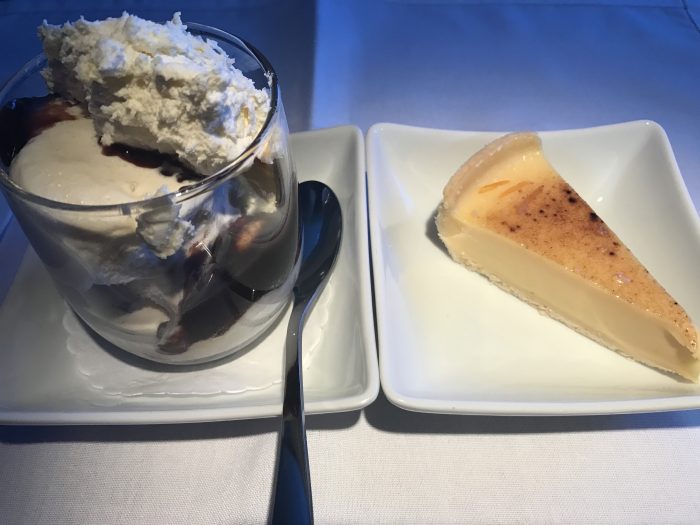 I ended up watching a crazy amount of movies on this flight, since I had no interest in sleeping. The inflight entertainment screens in business class on American’s Boeing 777-200s are decently sized, though they are a bit far away from where you sit. The overall quality of the movie selection wasn’t amazing, but at least there were a ton of movies to choose from.

I ended up watching Mike & Dave Need Wedding Dates (dumb fun), Don’t Breathe (solid thriller), The Secret Life of Pets (fine), Central Intelligence (silly, but The Rock & Kevin Hart always bring it in everything they do), and The Hollars (good soundtrack & cast). Later on, I watched 4 episodes of one of my favorite TV shows, You’re The Worst.

If you haven’t figured it out based on the number of movies & TV shows I watched, the flight from LHR to LAX is a long one, lasting around 11 hours. I managed to watch all of this despite the video system crashing about half an hour into the flight. This didn’t happen only for me, but for the entire plane as well. After about 30 minutes, everything was reset to working order.

A little while before landing, there was a snack service. I had the charcuterie, along with the salted caramel pot, which was great. 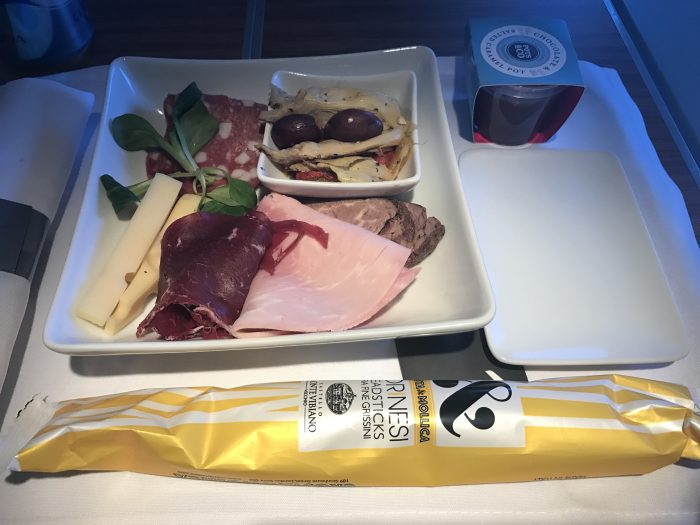 Upon arrival, after I exited the aircraft, there was an American Airlines representative waiting with Express Connection documents for connecting passengers. I had plenty of time to make my connecting flight, but it was still nice to be able to make it through the process faster.

For the most part, this was another solid American Airlines business class experience. The service was excellent. The food wasn’t entirely great, but some parts were quite good. The only real drawback is how the Boeing 777-200 Zodiac seats are attached in pairs. The seats are just fine on their own (perhaps a bit narrow), but I would imagine that if you were trying to sleep, and got stuck with someone who was moving around a lot, that it would be very frustrating. Given how much money is spent on refurbs like these, American should have done far more testing. I wouldn’t say that you should avoid this cabin entirely, but do your research before booking to see if you’ll be able to grab one of the better seating options.