After almost 24 hours of traveling already and a day layover in New York City, it was finally time for me to board my flight to Europe. I was flying on American in Business Class from New York JFK to Manchester on an award booking. 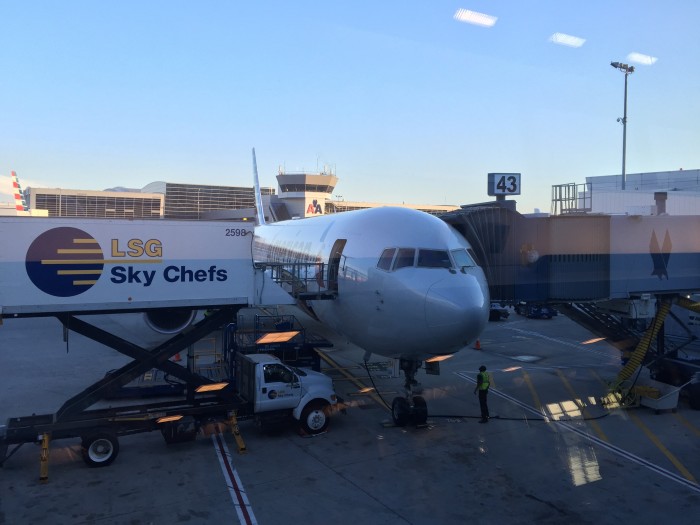 The flight was initially delayed for 20 minutes due to a fuel pump issue, but the delay gradually expanded to be 70 minutes. I had left myself a fair amount of time to make my train connection from Manchester to Glasgow, which is where I was ultimately off to to visit friends, but this was going to be cutting it close.

The business class cabin on American Airlines’ Boeing 767-300 is in a 1-2-1 configuration, with all seats having aisle access. 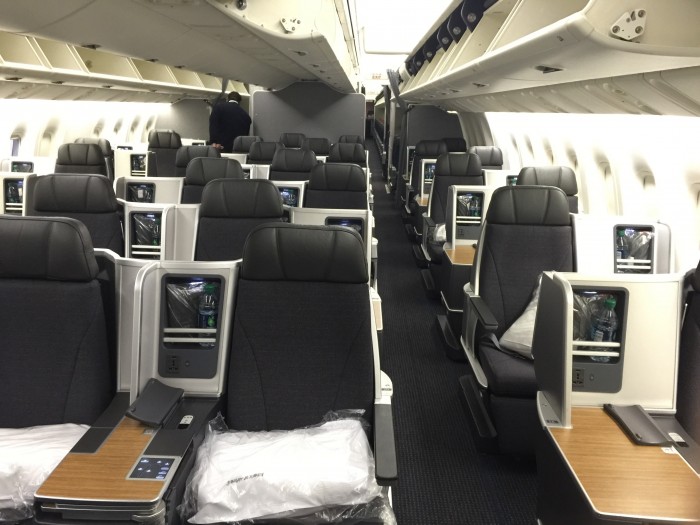 The quirk of the layout is that the seats are staggered, with some seats being closer to the aisle, and some closer to the window (or center of the cabin in the case of the middle seats). 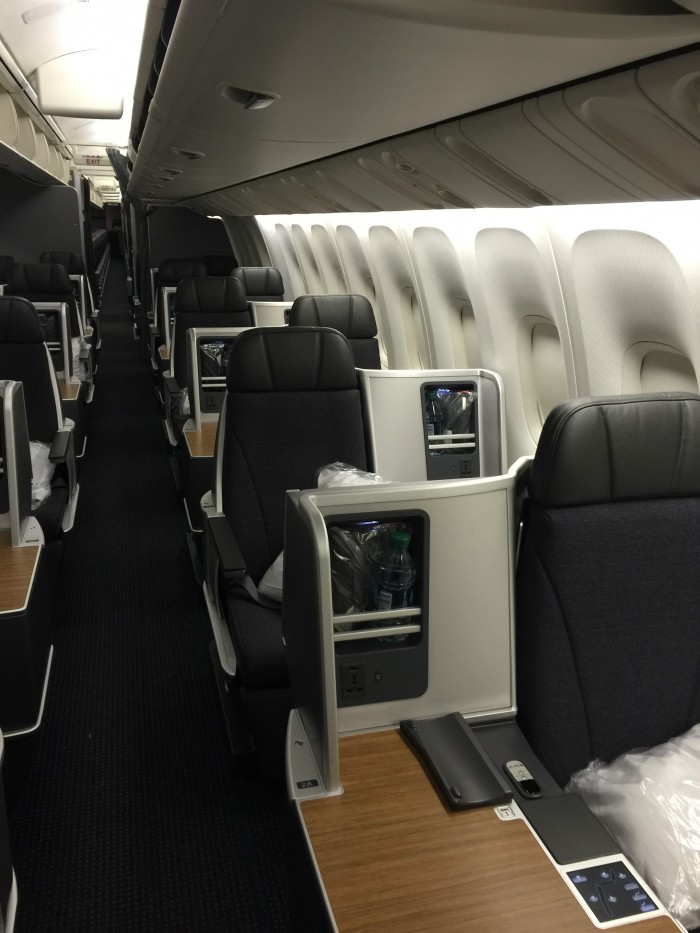 I’d researched this beforehand and found that the even numbered rows resulted in single seats closer to the window, thus ensuring more privacy, so I had selected 4A. 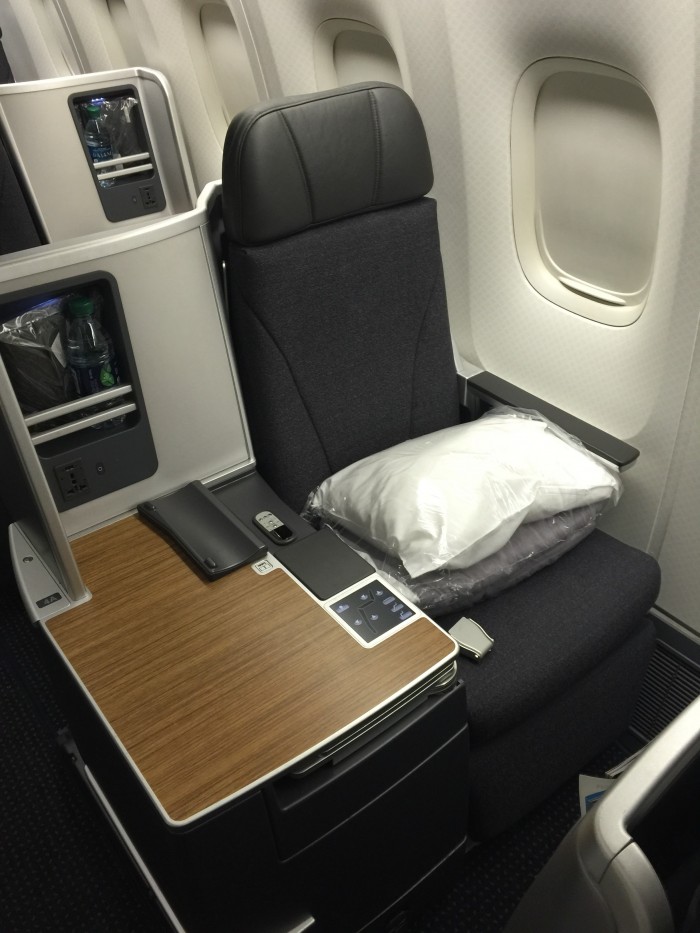 There was a bottle of water waiting for me, along with the amenity kit. For some reason, there was a light on the seat whose sole purpose seemed to be to illuminate the water bottle. 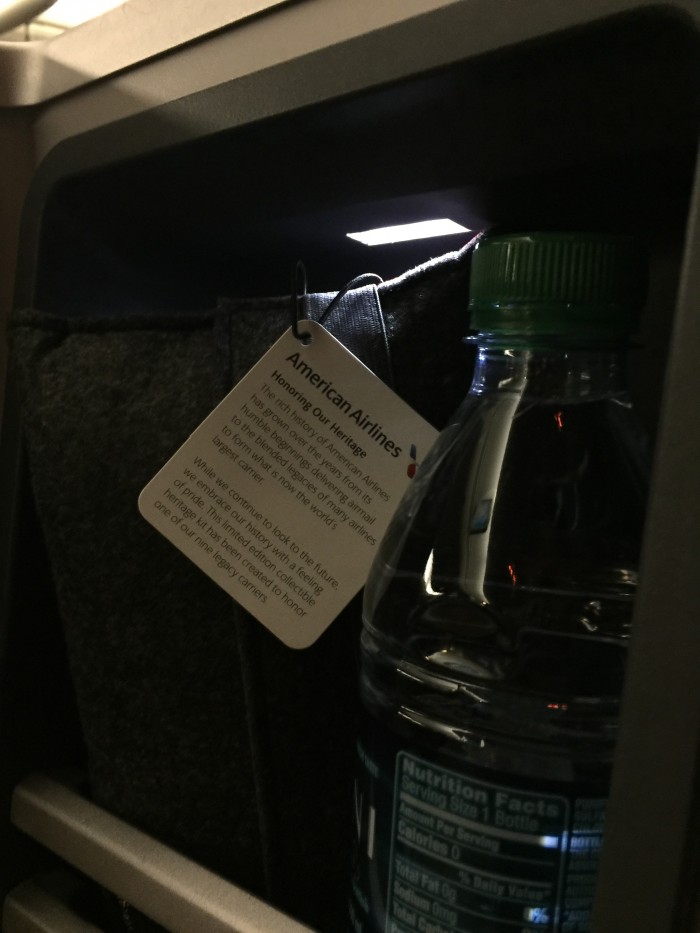 As usual, I looked at the amenity kit while I waited for boarding to be completed. It was the same as last time (another PSA retro look), with the addition of mouthwash, earplugs, headphone covers, a pen & tissues. 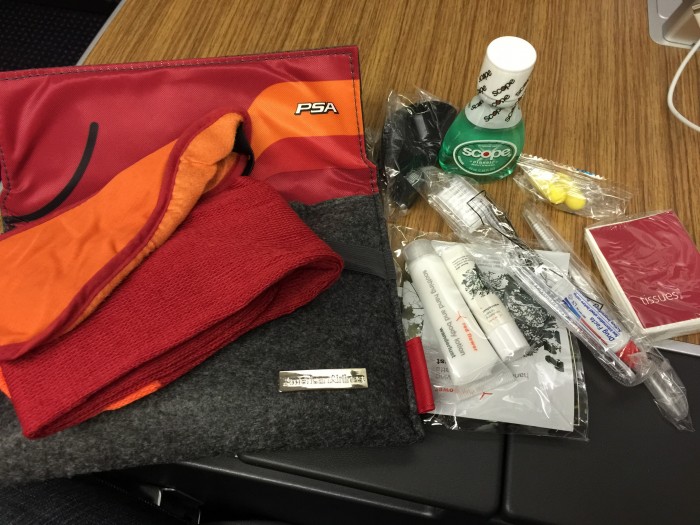 I also browsed through the AA business class food & drink menus for the flight from New York to Manchester. 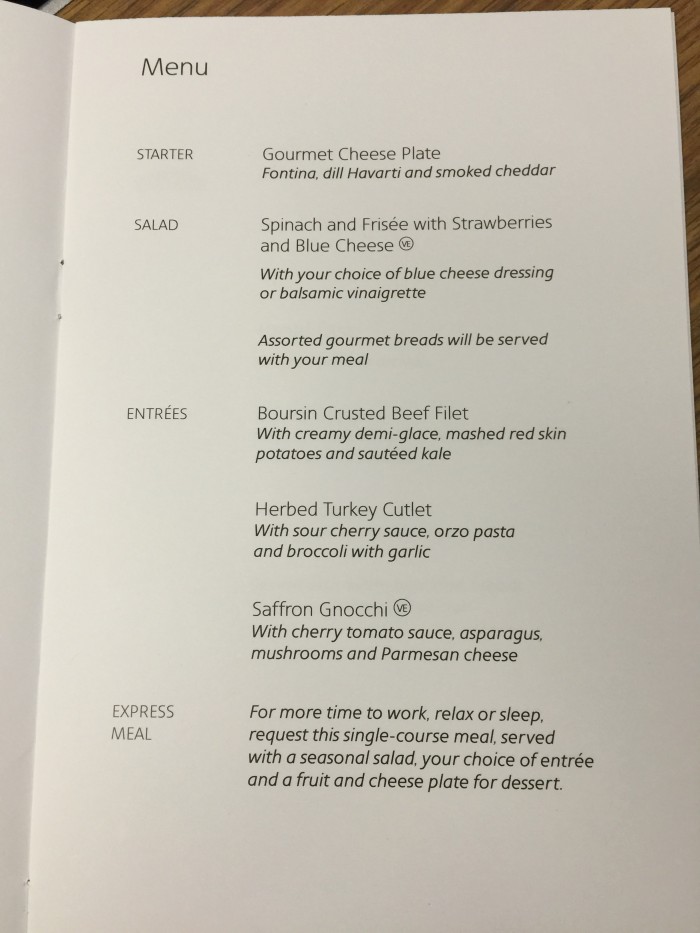 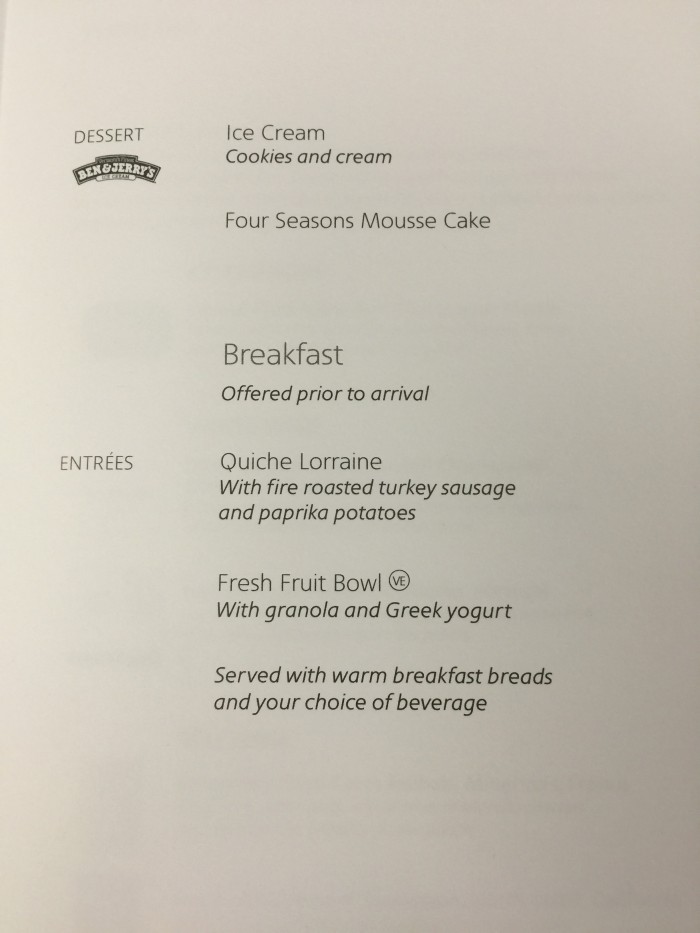 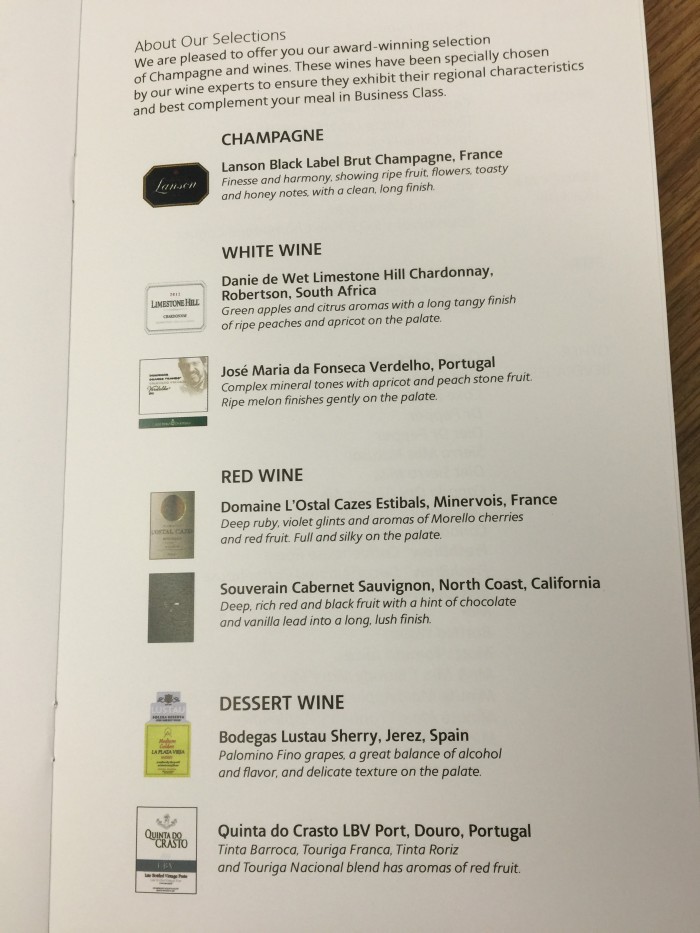 As far as liquor & beer, they were exactly the same as what you’d find on a domestic AA flight. I’d like to see more airlines invest a tiny bit of effort on improving their liquor & beer selections. It wouldn’t cost much more to have some smaller, higher-quality brands offered. I imagine that even if the brands might normally cost a bit more, they’d be willing to offer a discount to have people sampling their beverages. 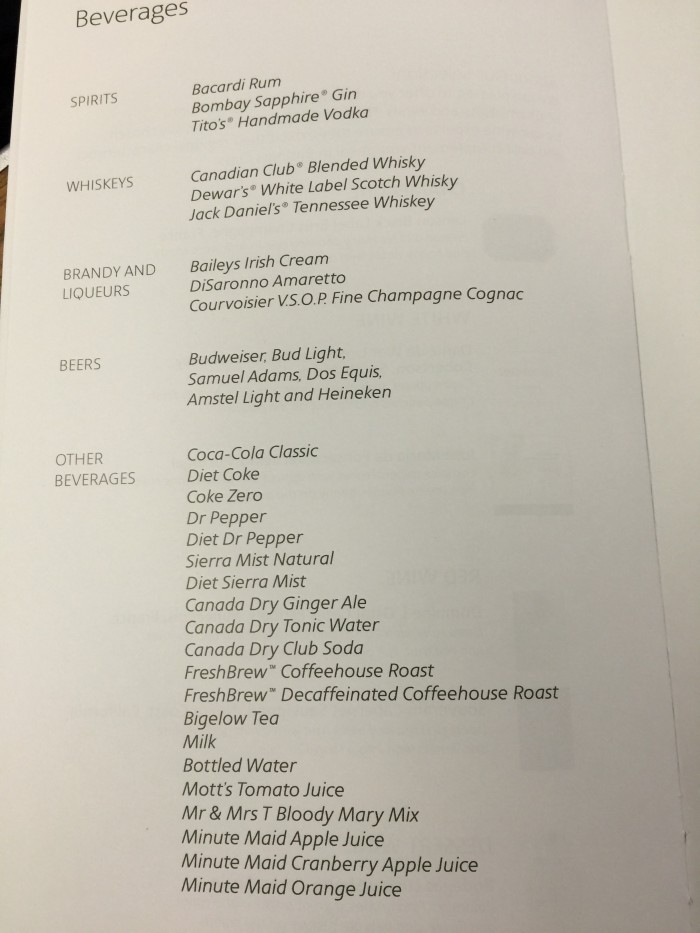 I started with the cheese plate, which was exactly the same cheese as what I’d just had in the JFK Flagship Lounge. Which was also similar to the cheese I’d had on my flight the previous day. I get that suppliers are going to be the same, but there must be some way of mixing things up a bit. For my entree, I had the boursin crusted beef filet, which was surprisingly great for an airplane meal. Usually meat can be a bit iffy on a plane, but it was cooked perfectly. Everything was served all at once, which is nice on a fairly short red eye flight from New York to Manchester. 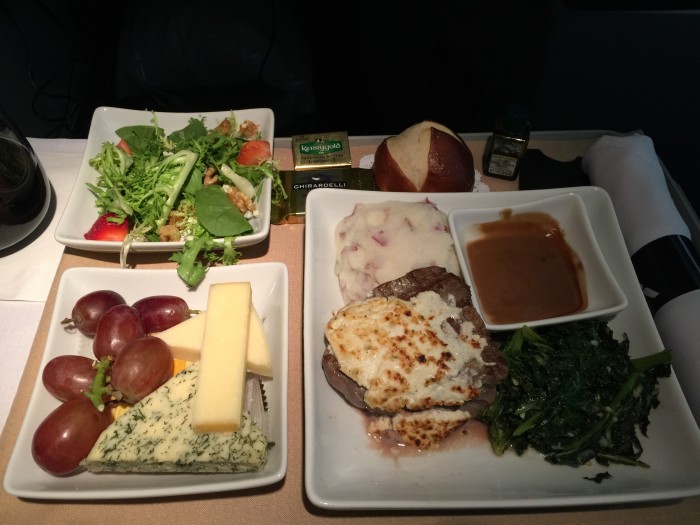 Then for dessert I had ice cream & my customary glass of port. 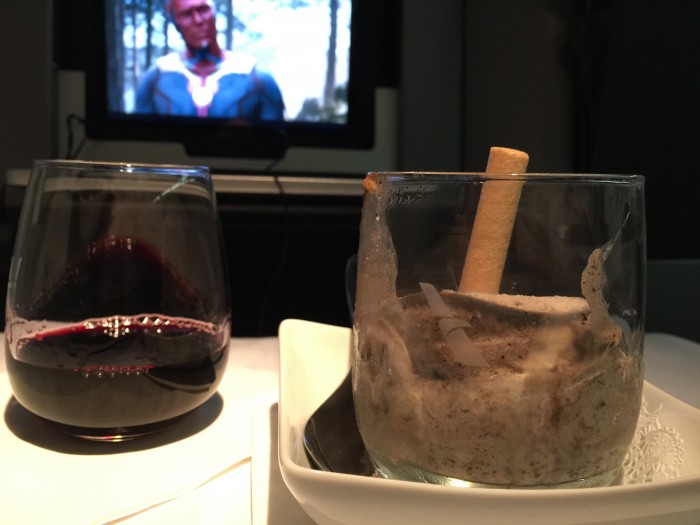 The inflight entertainment was accessed through personal Samsung tablets. After watching a mediocre movie (Avengers: Age of Ultron), it was time to try to sleep for a bit, so I set my seat into lie-flat mode. 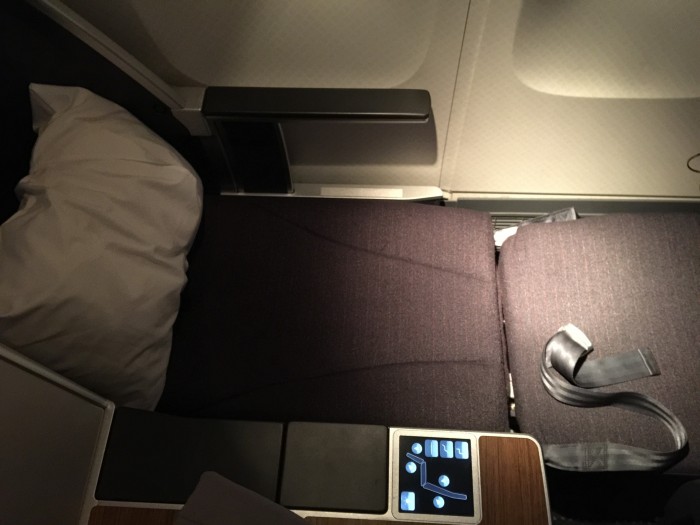 I dozed a bit, but it was my second straight night of not-great sleep. The flight from New York JFK to Manchester is only about 7 hours, so once you take into account the ascent, descent, and meal service, it doesn’t allow for a full night of sleep.

In the morning, I had breakfast while watching episodes of one of the best shows on TV, Mr. Robot. It’s all over inflight entertainment systems these days, so I highly recommend checking it out.

The business class service on this American Airlines flight to Manchester was fantastic. I’d flown on USAirways Business Class from Philadelphia to Manchester in the past, and the service from the USAirways crews had always been a mixed bag, ranging from decent to outright surly. On this day, the American flight attendants were great. The only slight annoyance is that the Samsung tablets have to be returned with about 25 minutes left in the flight before arriving in Manchester. I understand that they need to make sure they’re all returned before they do all the other preparation to do before landing, so it’s not their fault. I just wish that American consistently had proper inflight entertainment screens that can be watched for the entire flight.

Thanks to our delay departing JFK, I had about a half an hour to taxi to the gate, deplane, get through immigration & customs, and then make it to the Manchester Airport train station.

Any drama about my chances was quickly quashed. Despite being one of the first people to immigration after exiting the plane thanks to being in business class, we unfortunately had arrived just minutes after another flight. I gave up any hope of catching my train, as did the guy behind me, who was in a similar situation.

Thanks to reasonably quick passage through immigration & customs, I ended up making it to the train station 15 minutes after my train to Glasgow had departed. It figures that this was the one time that the British train system ran on time. My ticket was a special airport ticket, which allowed me to rebook onto the next service, but only on direct trains to Glasgow, which meant that I had to wait an hour and 45 minutes before I could finally depart on the final leg of my long initial journey to visit friends.