As I said in my last post, Kuala Lumpur’s express train into the city does not run all the time. It’s disappointing that Kuala Lumpur has this amazing express train into the city from the airport, yet doesn’t operate it 24 hours a day, or at least during a period that covers all of the incoming flights. I ended up having to pay RM135 for a taxi to KL Sentral, which is around $33 USD. It’s not unreasonable, but it’s much more expensive than the train, which is only RM55 one way. Also, the train only takes half an hour, while the taxi takes an hour. I didn’t have much of a choice though, as I wanted to see Kuala Lumpur during my layover, which would be almost 20 hours.

For this layover, I stayed at the Aloft Kuala Lumpur Sentral. 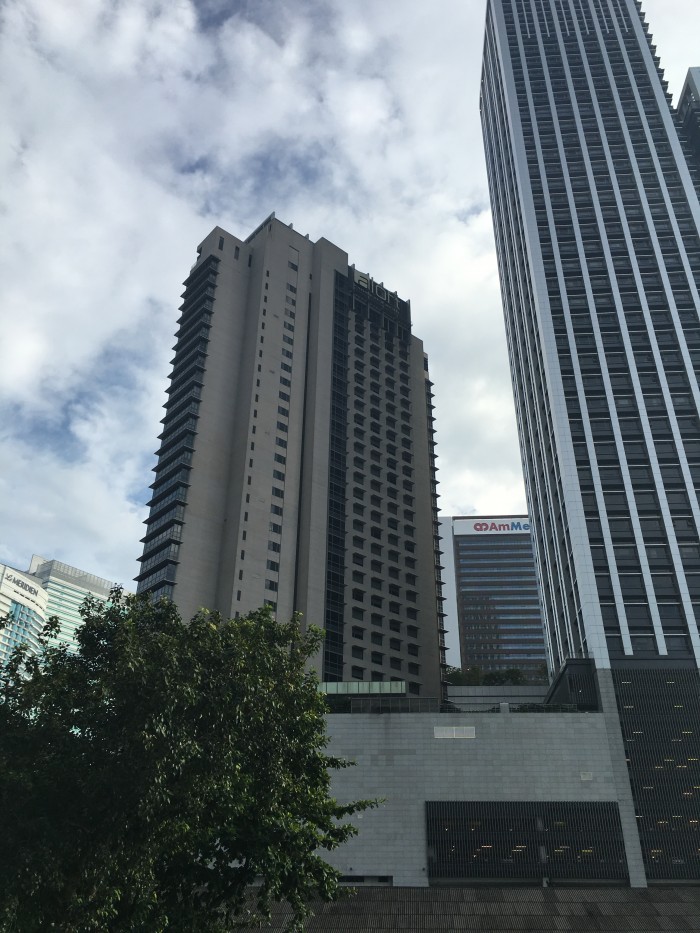 Quality hotels in Kuala Lumpur are very reasonably priced. It was just about $80USD for the night at the Aloft, which was a great hotel. Even better, thanks to some ongoing Starwood bonuses such as using their app for check-in/the room key, I would be earning lots of points for my stay.

One bonus of taking the taxi into the city was that I got dropped off right at the main entrance of the hotel. However, the Aloft Kuala Lumpur Sentral is essentially attached to the train station. If you arrive by train, you don’t have to go outside to access the hotel. Instead, just follow the clearly marked signs from the train exit, which will then direct you toward a shopping mall, then down a hallway toward the hotel’s side entrance. 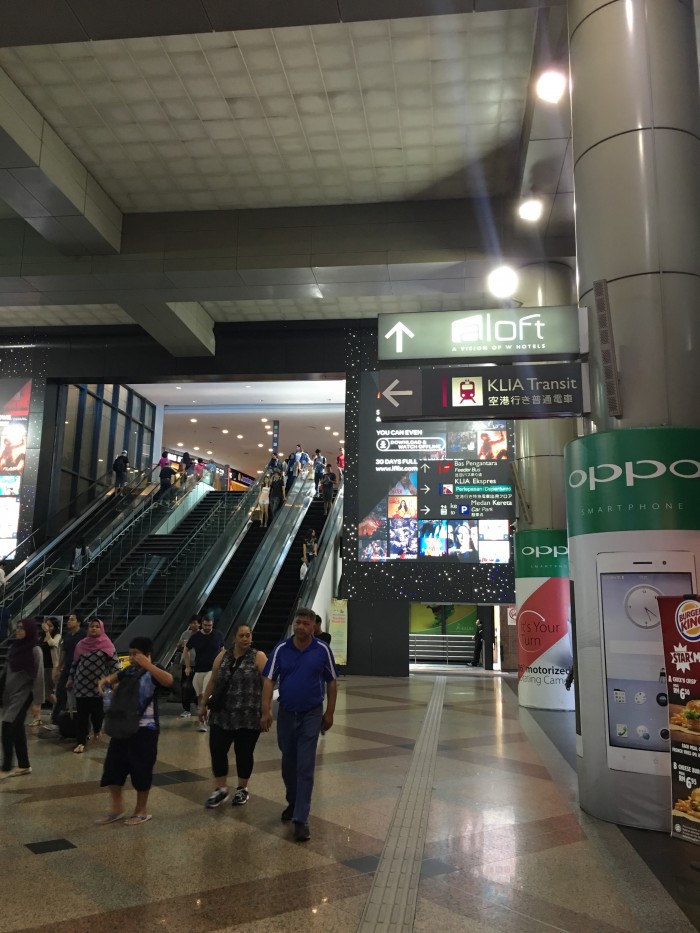 Thanks to my arrival around 2am, the hotel was dead. After dropping my things off in my room, I went up to the roof to see the pool & bar area. Unfortunately, everything was closed, so I couldn’t have a drink, though there were still some people around. I wish that the pool had been open 24 hours a day because when I was wide awake at 4am, a swim would have been nice. 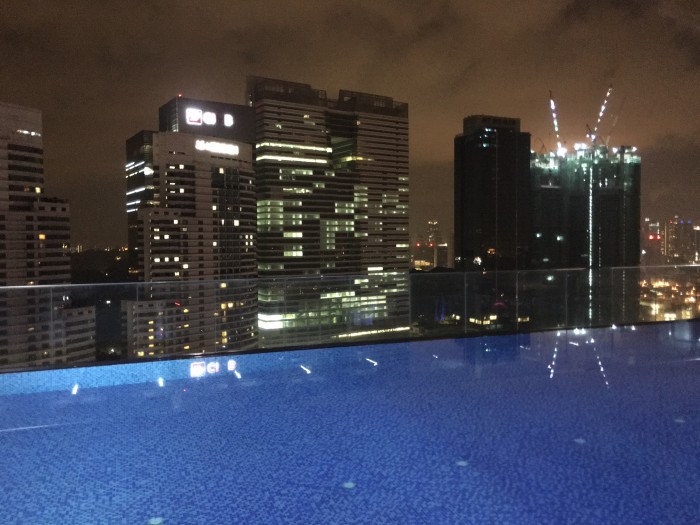 Between the pool area and my room, there were some pretty spectacular views of the area. The entire hotel was huge for an Aloft. 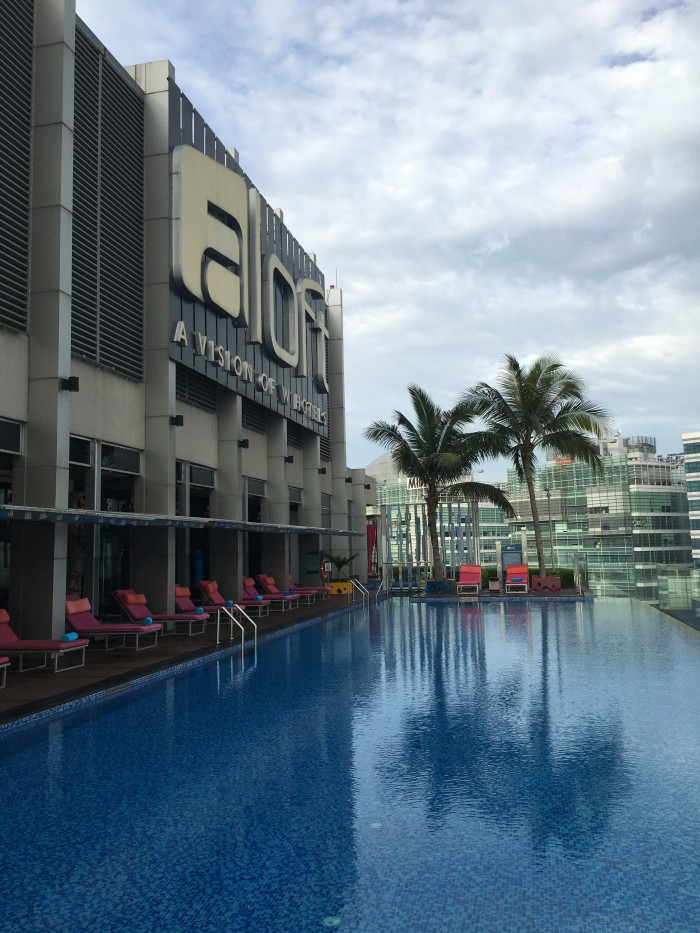 Thanks to having SPG Gold status, I was upgraded to a room with a free minibar. This came in handy due to my late arrival. I’ve never been so happy to have Pringles in my life. 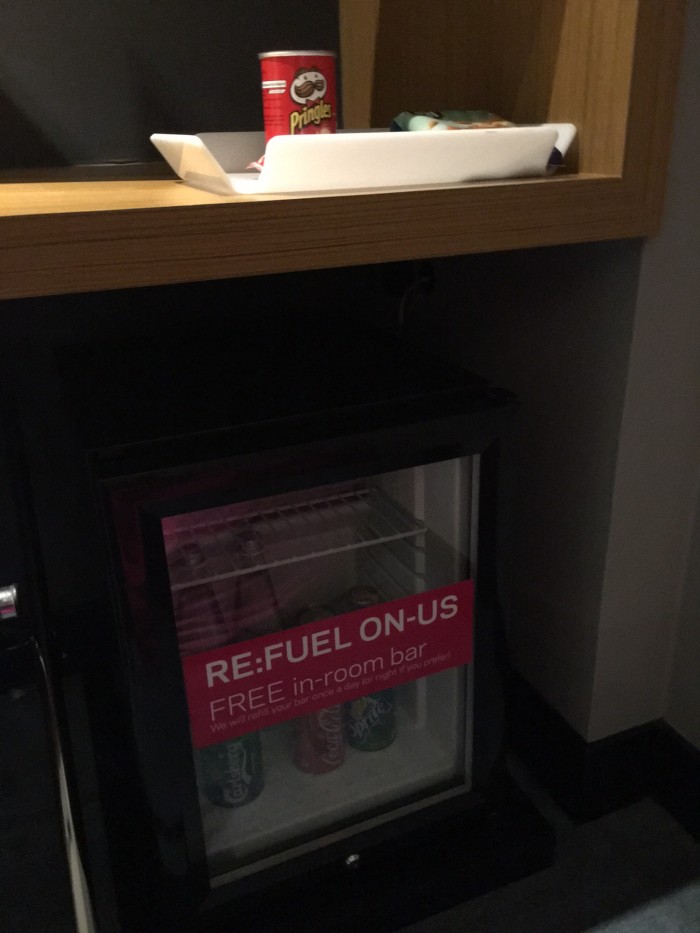 The room was nice and big. Considering I was only there for less than day, I didn’t really need that much space, but it was still good. 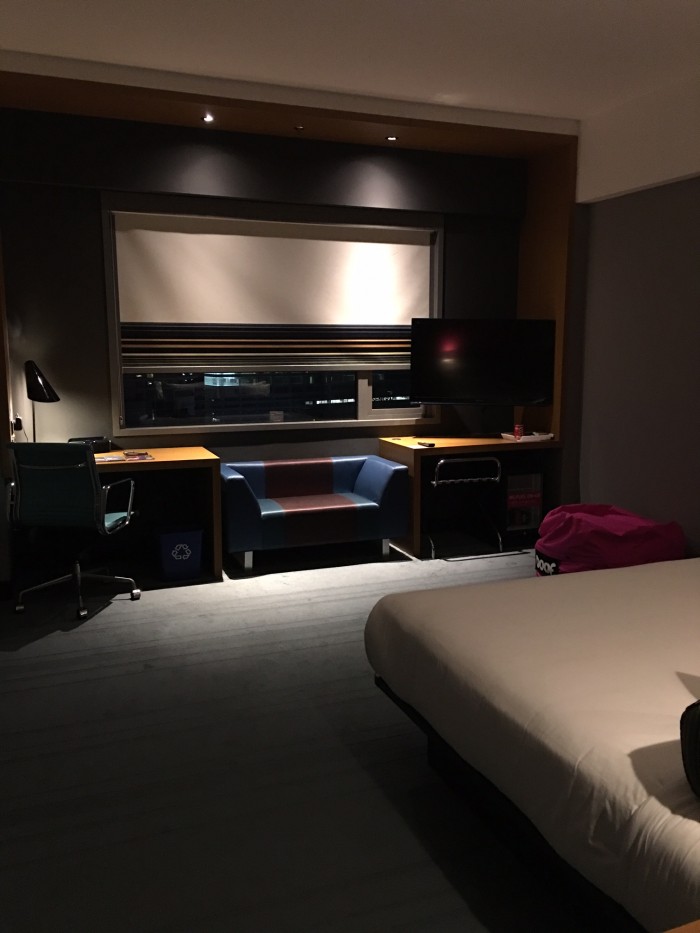 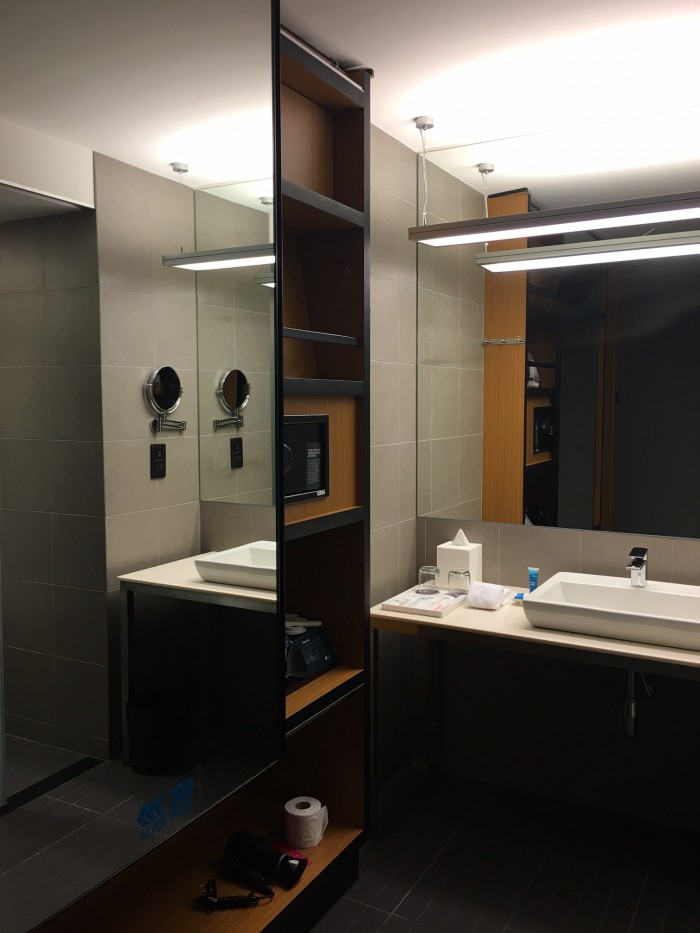 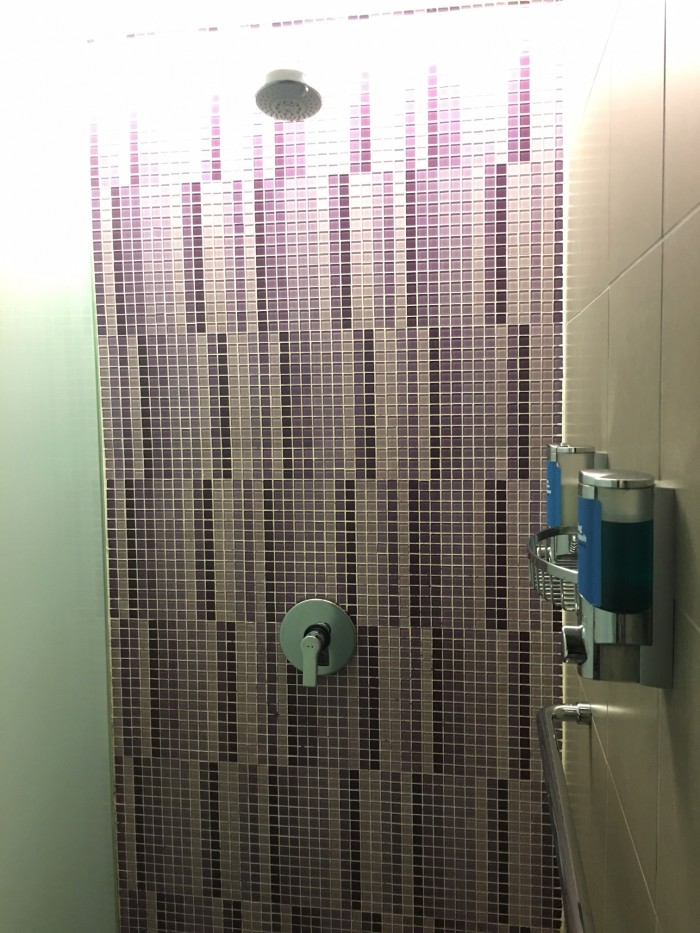 There was a beanbag chair, though it looked a little sad sitting in the middle of a the large floor. 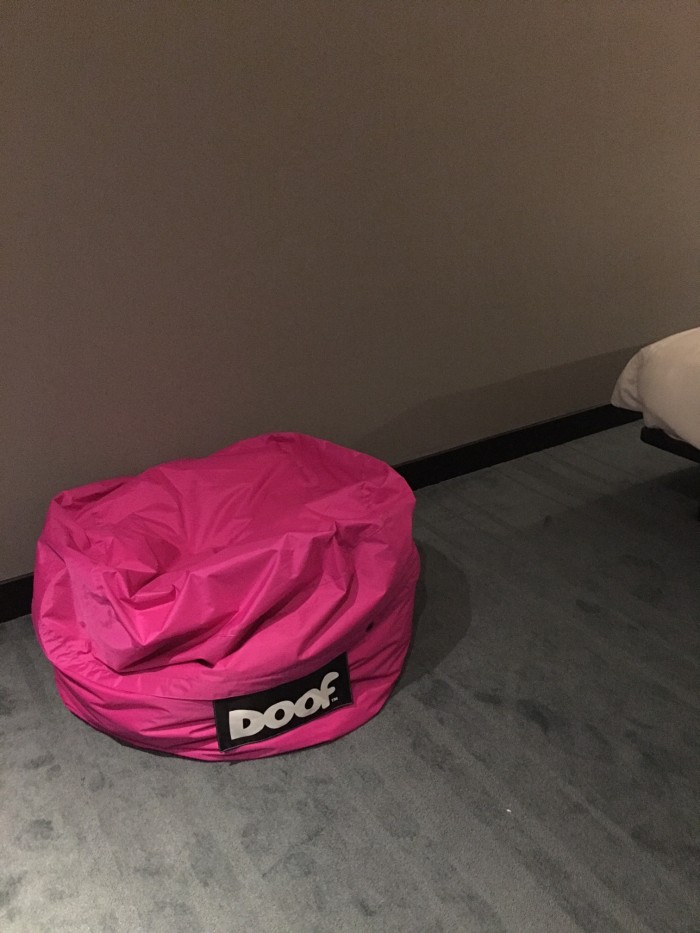 Thanks to having status, I was able to get a late check-out, which was nice since my next flight wasn’t until the next evening. This meant I could explore all day and then go back and check-out right before I needed to get the train back to the airport.

While the lobby was big, with lots of lounge areas, bars, and restaurants, I never saw more than a couple of people in it. 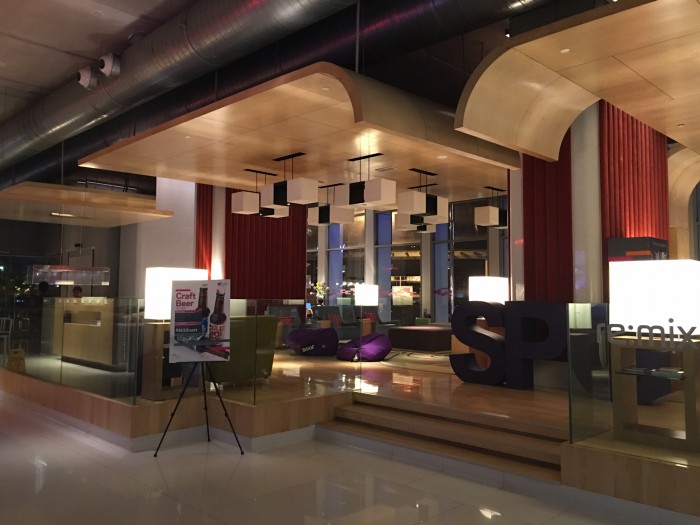 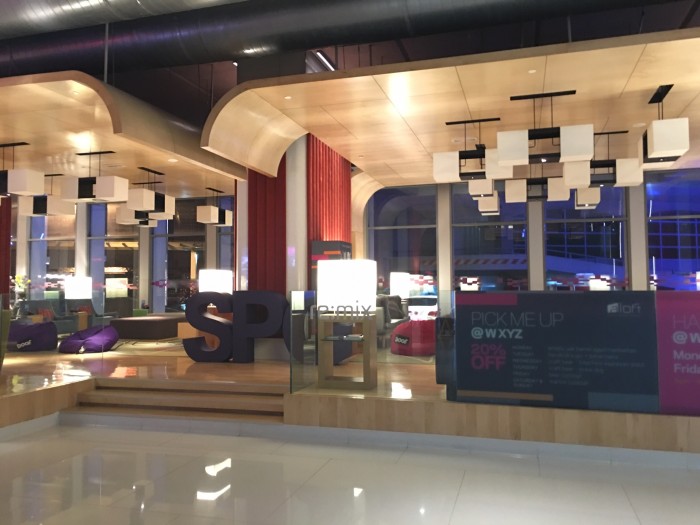 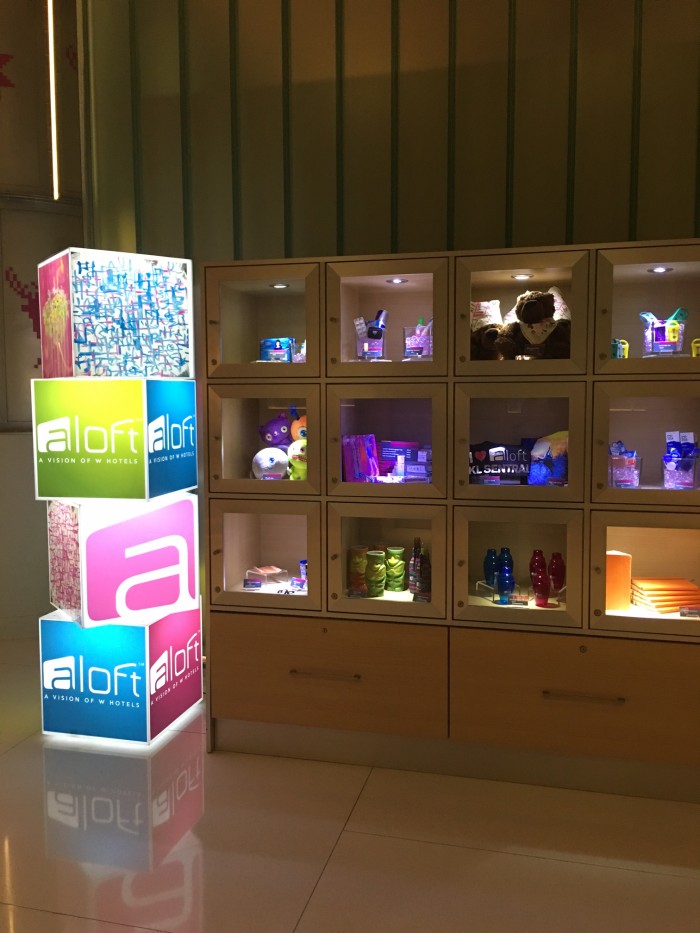 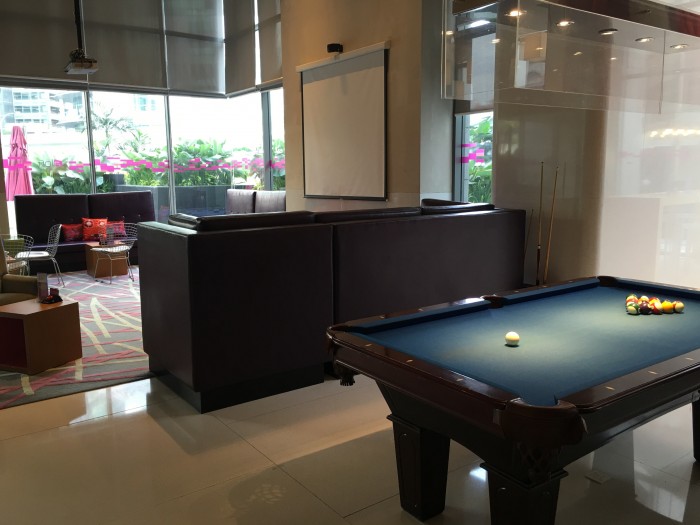 During my stay, I only had one issue. The keyless room entry through my phone didn’t work until the very end of my stay. When I first checked in, the issue is that in Malaysia, you can’t check in remotely since you need to present your passport. Still, it shouldn’t have taken so long to have the app activate the room key via my phone. That said, even when it did work properly by the next afternoon, the hotel elevator still required a key to be operated. You also needed a key to turn the lights on in the room. I’m not sure what purpose a keyless system serves when in fact you need a key a lot of the time.

Overall, I was impressed with the Aloft Kuala Lumpur Sentral. It’s in a great location, with fantastic transportation links to both to the airport and anywhere else you’d want to be in Kuala Lumpur. It’s a perfect place to stay for a long layover. The hotel is pretty luxurious, especially for the price, with lots of solid amenities. Room key issue aside, I wouldn’t hesitate to stay there again (though on my return layover in Kuala Lumpur, I did stay somewhere else, only because I wanted to try different places).