Despite having visited Japan a few times, there were a couple of quintessential Japanese experiences that I had not yet partaken in. The first was visiting an onsen, which is a hot spring bath. The second was staying in a ryokan, which is a traditional Japanese inn. After having spent a few days hiking around Lake Tazawa, Tono, & Hachimantai in northern Japan, I wanted a relaxing break. It was the perfect opportunity to try both an onsen & a ryokan in the same place by staying at an onsen ryokan in Yuzawa, a town famous for its hot springs & winter sports.

The ryokan experience at Yuzawa Hotel

From Echigo-Yuzawa train station, which I had arrived at on the shinkansen using my JR Rail Pass, it was about a 10 minute walk to my ryokan, the Yuzawa Hotel. 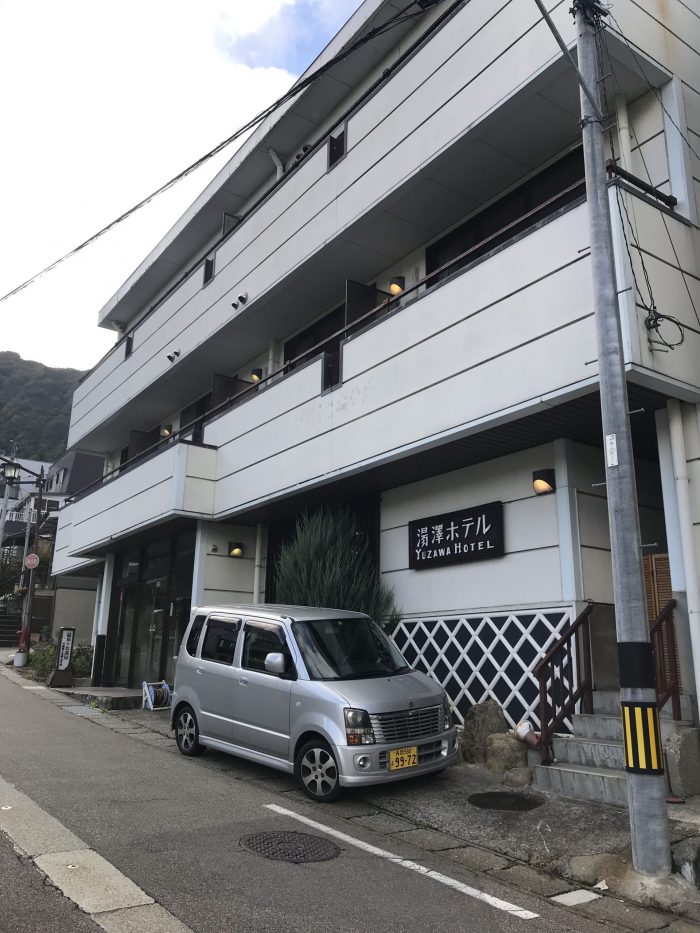 After taking off my shoes at the entrance & putting them in the provided lockers, I checked in. 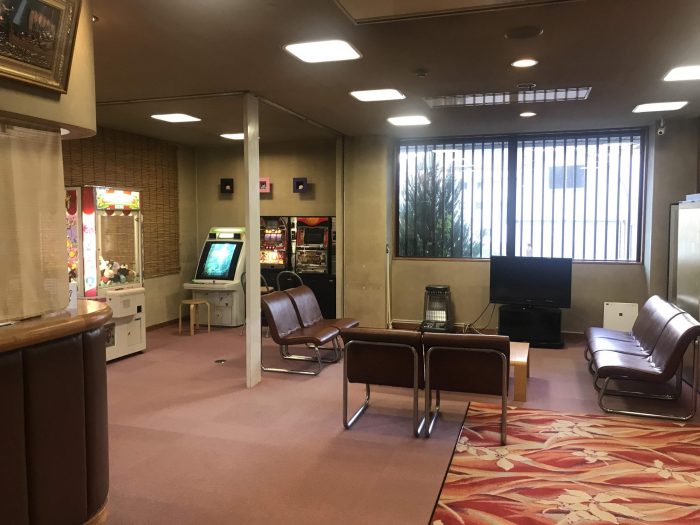 I had booked 2 nights for one person for $154 USD in late October. This also included breakfast and access to the on-site onsen. I had splurged on the Japanese-style superior room with a terrace, which was just $14 more per day. This balcony had a panoramic view looking south through the valley. 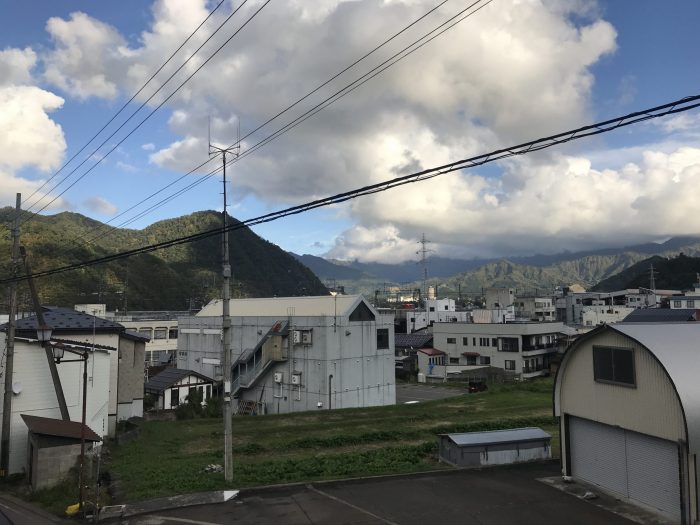 While the ryokan had traditional walls & floors, there were some modern touches, such as the television that I was able to watch Japan play in the Rugby World Cup on. 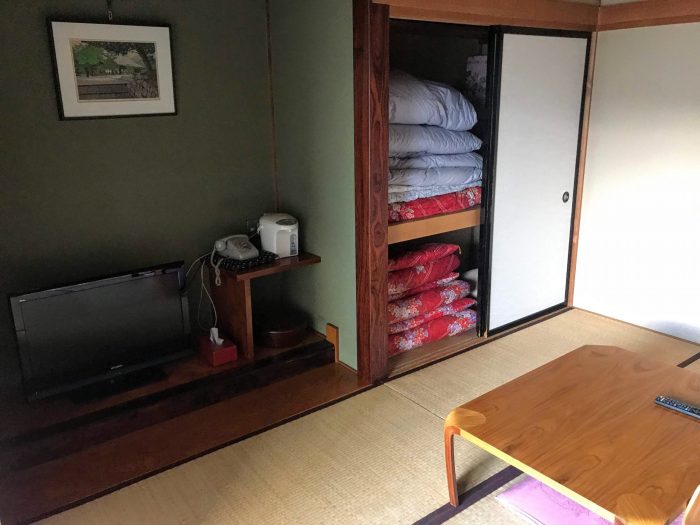 I thought that sleeping on the floor might be uncomfortable, however the sleeping pad & linens were actually very nice. I had no problems sleeping whatsoever. 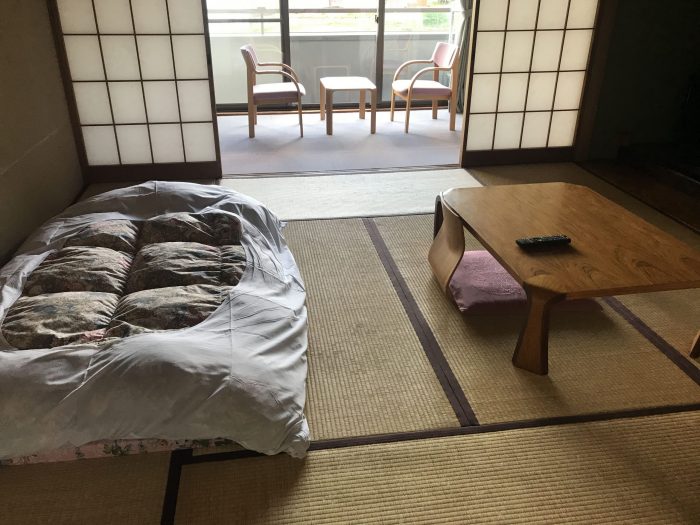 For breakfast each morning, there was a traditional Japanese offering, with egg, rice, tofu, salmon, and miso soup. 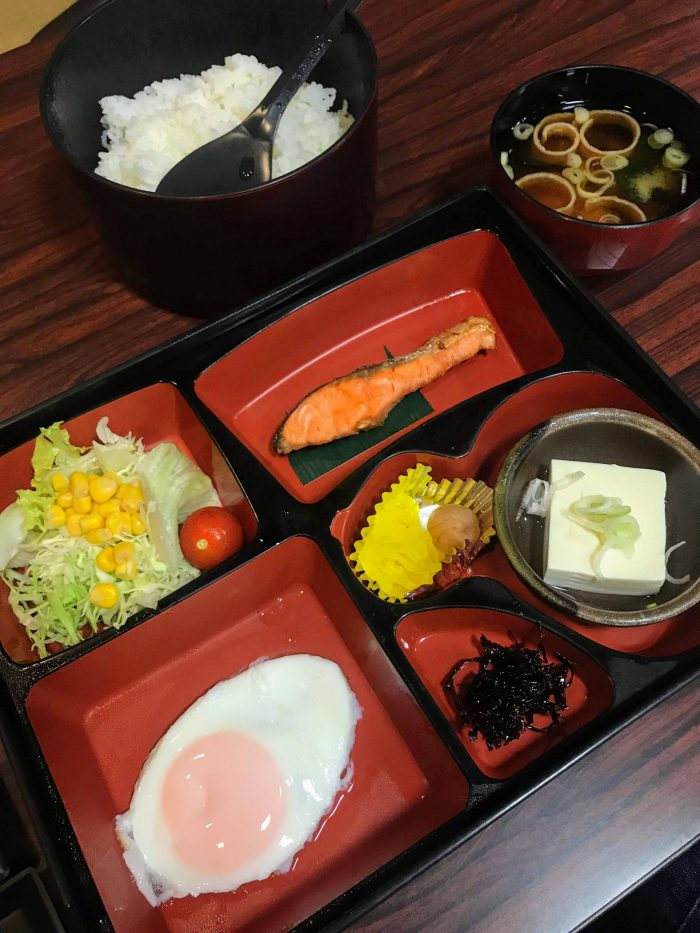 There is no bath or shower in the ryokan room, but of course you have the onsen available downstairs.

Upon arriving back at my ryokan room in the evening, I changed into the offered yukata (robe), and headed for my onsen experience. 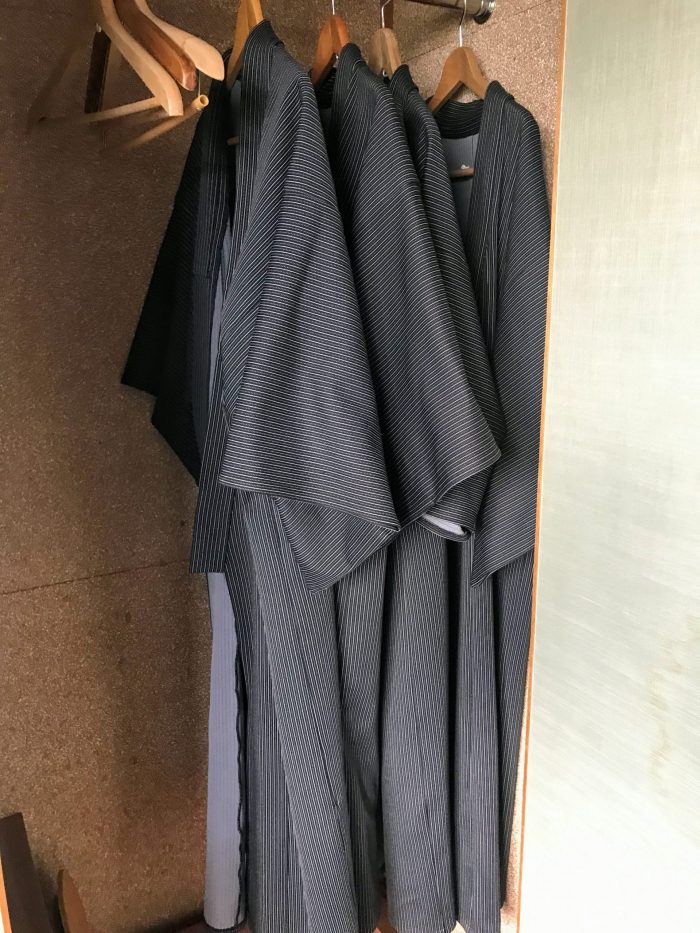 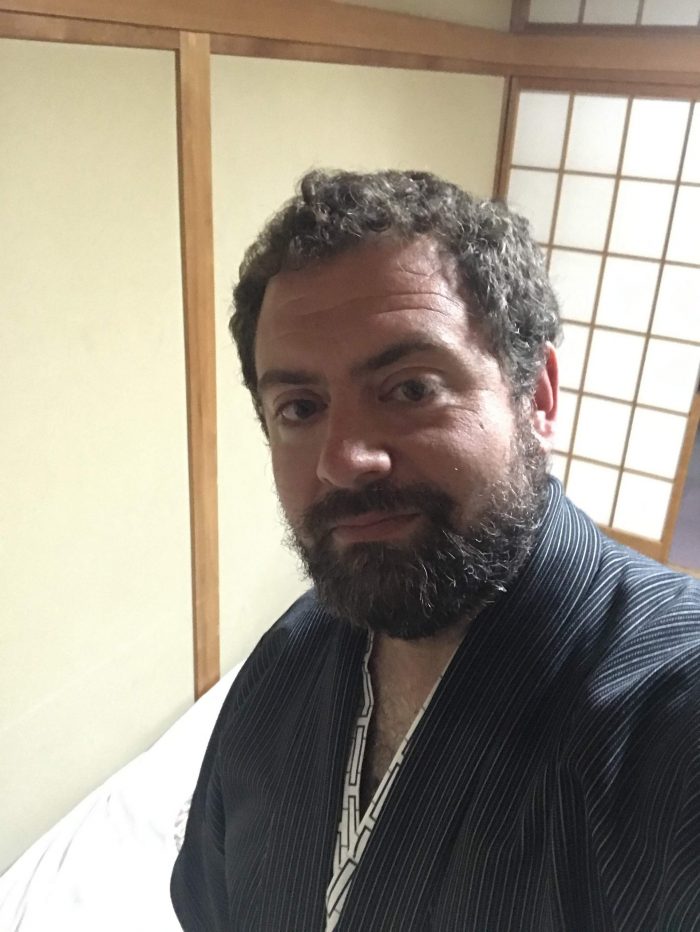 The onsen experience at Yuzawa Hotel

I was especially looking forward to experiencing the onsen since I had done so much hiking over the past few days.

At Yuzawa Hotel, there are two onsen options. There is a larger set of hot spring pools that are open 24/7, separated by gender.

Additionally, each set of hotel guests can reserve a private onsen for 45 minutes each day. This option is nice if you are with someone else, uncomfortable in the more public onsen, or if you just want more peace.

Since it was an available option, & it looked like a nice spa room, I opted for the private onsen. When I arrived at the Yuzawa Hotel around 3pm, only one private spot had been booked so far that day. 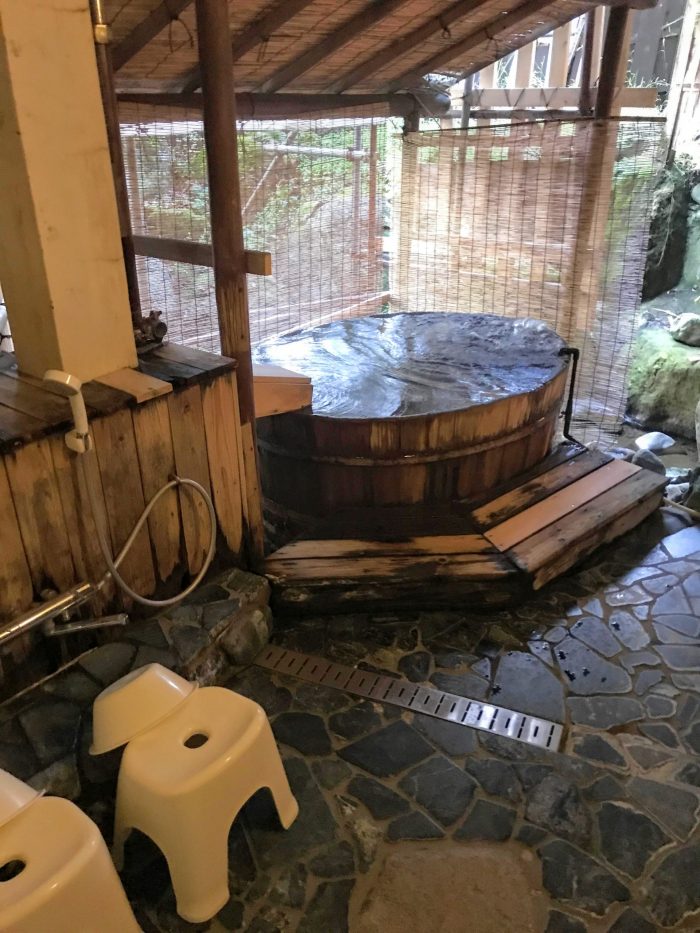 There are tons of onsen options around Yuzawa-machi. In addition to private facilities, there is even a spring on a street corner where locals were soaking their feet. 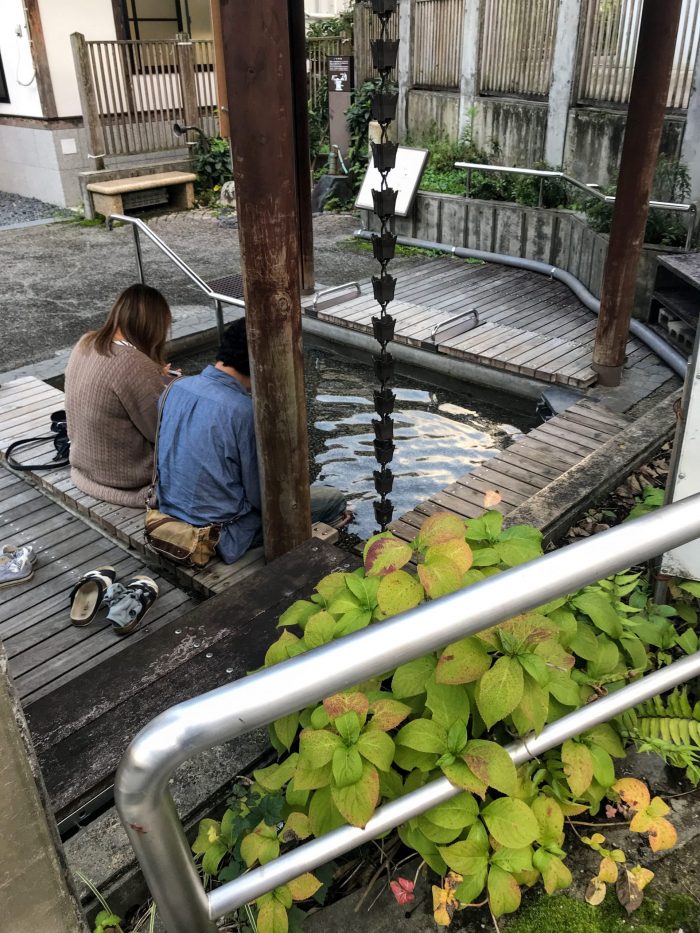 After washing up at the provided station, I entered the tub. The water was a little on the hot side for me, but I was able to also add cooler water to keep the temperature in control. This is another benefit to using the private onsen at Yuzawa Hotel. 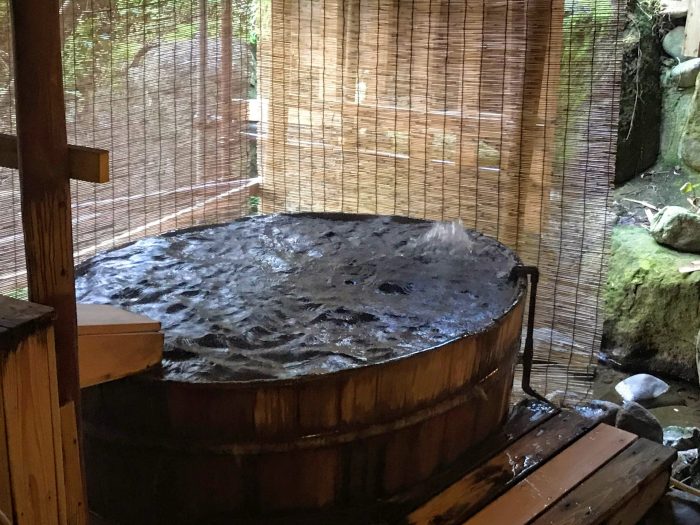 I’m not usually a big hot tub guy since they always seem like human soup, but this onsen experience was great. First, thanks to the overflowing tub setup, the water was constantly cycling, eliminating that perception of having been in someone else’s bath water (of course, this is also why you fully wash yourself before going into a Japanese onsen!).

All of the soreness from the previous week of hiking slowly floated away. In Japan, hiking & hot springs go hand-in-hand. I get the appeal of the whole onsen experience now.

Other activities in Yuzawa

In addition to staying in an onsen ryokan, there are plenty of other things to do around Yuzawa. As you might guess by the towering Japanese Alps above, Yuzawa has great skiing & snowboarding thanks to being one of the snowiest places in Japan. If those mountain sports aren’t your speed, there’s also a ropeway to the top, as well as hiking. These clean mountain waters of Niigata also produce some of the best sake in Japan (though somewhat surprisingly, Yuzawa does not have much to speak of when it comes to craft beer as of yet). Noodle enthusiasts will want to try the local specialty called hegi soba. Here are some other activities near Yuzawa.

Whether you’re participating in adrenaline-driven sports or trying local food & drinks, a stay in an onsen ryokan is the perfect way to end each day in Yuzawa-machi.

If you’re looking for other accommodation, check out these Yuzawa hotels & AirBnbs. 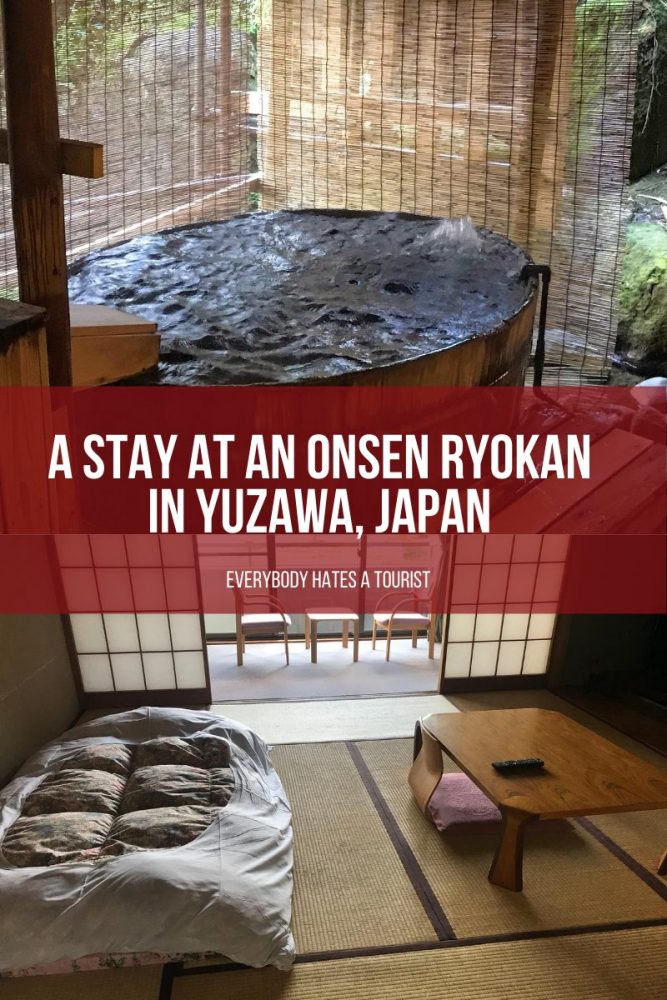