I was on a train in England, traveling from York to Windermere. It was the middle of the afternoon. I had been in the U.K. for just 5 days at that point, the very beginning of my study abroad year in Scotland. After a day or two in Glasgow, I’d set off with a friend to travel around England before the school year began.

The train was a bit outside of the Lake District when her boyfriend texted.

He said a plane had just hit the World Trade Center. We thought it was a joke.

It obviously was not.

As I’d checked in for my flight, my mom asked me if I was allowed to carry my Swiss Army Knife onboard. I said it was fine, since knife blades below a certain length were permitted.

That seemed like a bad idea even then, but we shrugged about it, & I was off to Europe.

The train pulled into Windermere, the end of the line. It was a grey September day with a drizzle, as you’d expect in the Lake District, one of the rainiest places in an already-soggy country.

We didn’t have accommodation, instead preferring to show up & try our luck booking bed-and-breakfast rooms via tourist information centers upon arrival. Their television was on, with everyone transfixed to the BBC news coverage that had already started.

I don’t know if we were watching live as the second plane hit. Too many news clips & too many years have bled those memories together.

I do recall how sympathetic everyone in Windermere was when they found out we were from the United States. Sympathetic & positive reactions to being American would become increasingly rare in the ensuing decades. There have been many times since where people learn where I’m from, and they just shake their heads & say “What the hell?” in regards to a plethora of issues, both foreign & domestic. As well they should. Much of the sympathy from that day gradually faded in the red mist of invasions, forever wars, violence, and xenophobia.

But on that September day & those immediately to come, there was love & compassion for us. It’s a small story of international support compared to the thousands of travelers who would get stranded in Gander, Newfoundland or elsewhere around the world, but I’ll always remember it.

We walked through the rain to our b&b and sat in our rooms watching the news. At one point, one of the British networks switched to ABC coverage for a little while. The British coverage had been just fine, but the voice of Peter Jennings was a comforting reminder of home.

I’m originally from New York City, and I have family there. I thought some worked in lower Manhattan, but I had no idea if any were in or near the World Trade Center.

My dad had worked in the World Trade Center in the early-mid 1980s before we moved away from New York. His office was high in one of the towers. My mom would take me to visit when I was little. I should be too young to have any memories of those visits, but somehow I still recall my ears popping from the speedy elevator rides.

In subsequent visits to NYC, a couple coming a few years before 2001, the World Trade Center would be a focal point. It dominated the view from the Circle Line tour on a dreary day, with the roof barely below the clouds. It towered above while we visited the food court on another empty summer weekend.

It would be days before I would find out that nobody I knew was in the buildings. But so many people lost so many loved ones that day. And many more around the world would also feel that pain in the coming years. Any sadness I felt was nothing in comparison to what they were experiencing, both that day and forever since.

As I wrote 10 years ago, “Today, let’s remember not only those who died on 9/11 but also every other innocent person who has died of everything that has resulted since. Thousands of civilians have been killed in Iraq, Afghanistan, and other places around the world. Whether it was on 7/7, 3/11 or any other random day of the year, anyone who has experienced the loss of a family member or friend has gone through that same pain. Their grief is no less important.”

Tired of the news, we went for a walk to the lake. It was raining harder by this point. 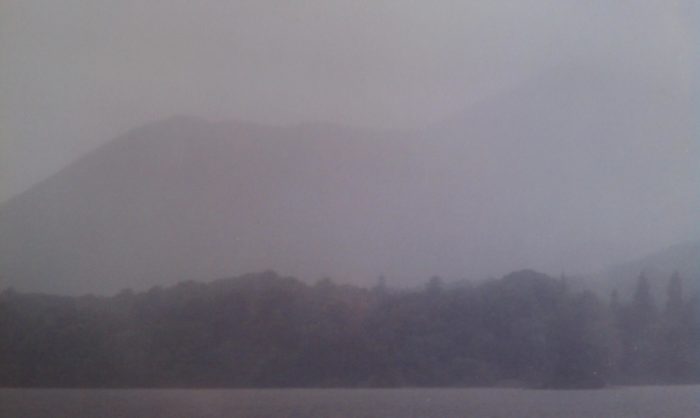 The rain didn’t let up for the next few days, the entire time we were there. The rest of that visit was a grayscale blur. A few rainy walks. A few quiet meals.

With the gloom hanging overhead, it was time to move on. After a brief visit to Nottingham, which wasn’t any more cheerful, my friend & I each went our separate ways. I needed more life, more energy to distract me.

In the paranoia of those days, everyone was saying to avoid large cities, not knowing what the next target would be. I headed straight for the embrace of London. While I enjoy the outdoors, I feel most comfortable in cities. New York, London, & Tokyo among my favorite places to visit. London felt like the right place to be at that moment. Any fear was unwarranted then, though London would eventually have its own terror.

I stayed in a youth hostel in Holland Park. It was during that time of my life where I’d save money by staying in a shared room with 10 other people, including a guy with a shaved head and a maniacal grin. I spent as little time as possible in that room.

Instead I wandered London, enjoying the sights & the parks. Outside the U.S. Embassy, Grosvenor Square overflowed with flowers & notes. There is a permanent memorial there today.

On my last evening, I was sitting in the hostel common room when I struck up a conversation with another American traveler who was also starting a year abroad. It turned out that she had gone to Columbine High School. This wasn’t her first time dealing with tragedy.

We went out to some arcade in central London with a couple of other people from the hostel. It was nice doing something normal for an evening. We walked & talked a lot. The next morning at breakfast, we exchanged email addresses before going our separate ways. Unfortunately, I lost the slip of paper with hers during my journey, so we didn’t stay in touch. Nowadays it would be much easier staying connected with a random stranger you’ve crossed paths with, as we would have just followed each other on Instagram. Of course, it would have been just as likely that we never would have talked in the first place, instead burying ourselves in our phones. Travel has changed.

Being overseas gave me a different perspective on what had happened. I was busy, and everything seemed far away. That wasn’t a bad thing. After continuing around England to visit Oxford & Winchester (where I oddly met someone who had gone to my high school, some 5000+ miles away), I headed back to Glasgow. The school year started, and I quickly met some great friends, people I’m still close to now. That year ended up being one of the best times of my life.

Three years ago, I found myself in New York City on September 11th. I’d won a trip the the U.S. Open final, and I stuck around for a few days after. That day was overcast because of course it was. I wouldn’t have expected anything different.

I walked all over Manhattan. After a morning everything bagel with lox in Harlem, I headed south through Central Park. Looking across the reservoir, the tallest buildings were obscured by fog.

I had no desire to visit the Memorial. I have my own memories of the World Trade Center and that day. I don’t feel any pressing need to relive much else from it, certainly not while surrounded by gawking tourists who hate New York City & everything it stands for every other day of the year. But it’s good that the memorial exists for those who lost loved ones.

Instead, I wandered the Lower East Side & East Village, checking out some street art, stopping at Alphabet City Beer Co. for a pint, and at Amor y Amargo for cocktails. I then met a friend for pierogi at Veselka, followed by cannoli & a walk through the city.

It took me almost 17 years to get back to the Lake District. I’d been to the U.K. many times since 2001, including spending another full year in Glasgow. But I’d never managed to make it back to Cumbria.

In 2018, with corporate sponsorship in hand (AKA a generous severance following an office closure), I traveled through Europe for two months. With plenty of time to explore, I spent a week in the Lake District, staying again at a bed-and-breakfast.

This time, the weather could not have been more different, nor could my mood. There was a record heatwave and drought. On most days, not a cloud was to be found in the sky.

After each morning’s breakfast, I spent the day hiking around lakes, visiting Roman forts & stone circles, and drinking beer, enjoying the sunshine in this place I’d only ever associated with rain, drear, & tragedy.

Even when life is filled with doom & gloom, there are occasional sunny times. Appreciate them while you can.