On my first morning in New Zealand, I woke up to find a bright city, with clear, breezy skies following the storms the night before. I had no specific plans, so I walked along the shore of Lake Wakatipu toward the city centre, with the ultimate goal of grabbing a burger at the famous Fergburger.

The scenery is truly breathtaking, with mountains, trees, and water in every direction. 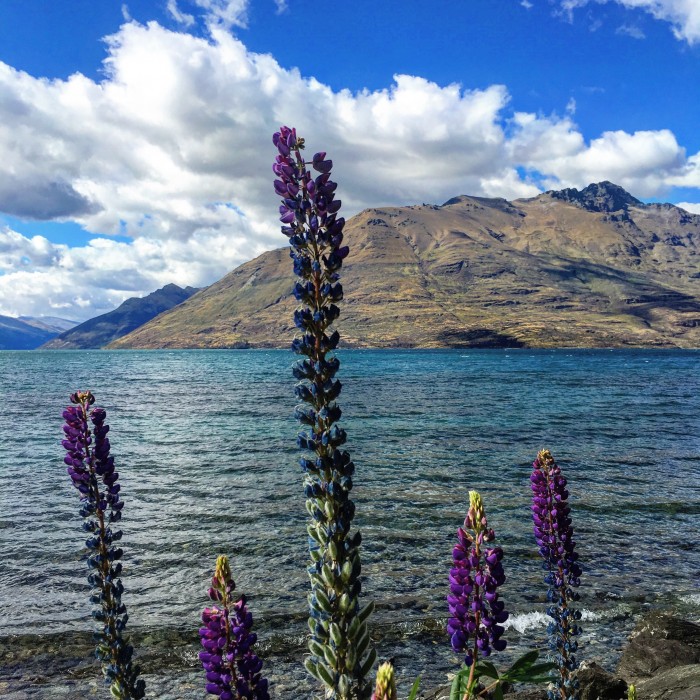 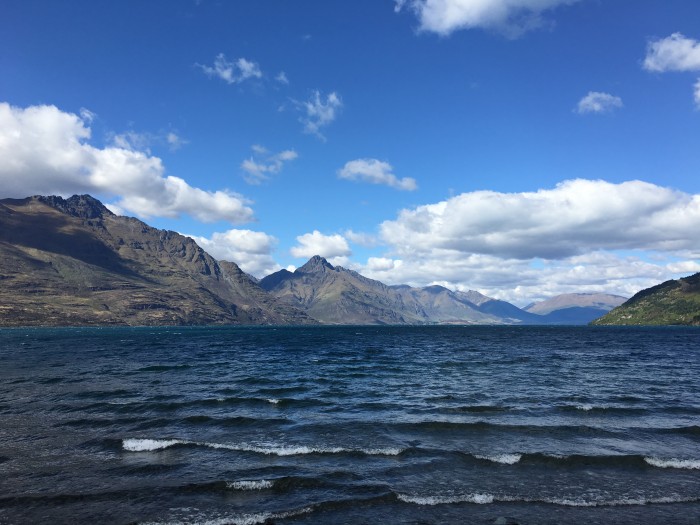 The southern part of Queenstown is a peninsula that juts into the lake. This bit of land was wisely preserved as a large park called Queenstown Gardens. The park features sporting facilities such as an ice arena and bowling ground, along with several nice hiking trails and bike paths. 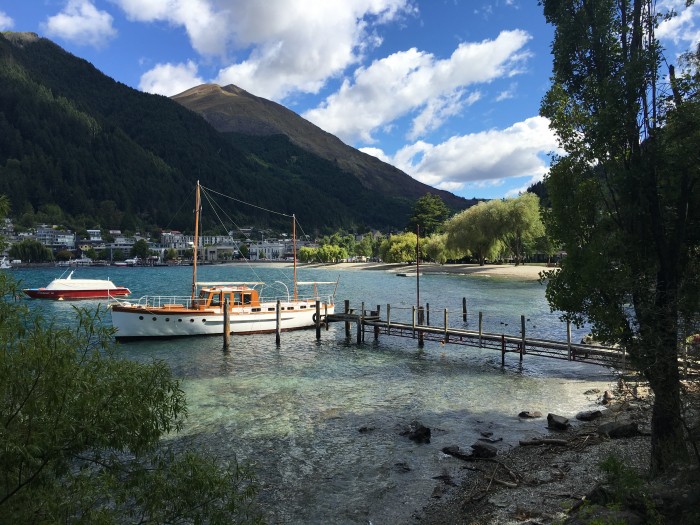 I had considered kayaking or getting out on the lake in some other way, but the water was much rougher than I expected. Plus, it was coming from the west, so I would have been fighting the wind to get away from Queenstown. It also looked like it was freezing, so I opted to stick with warmer options.

Queenstown is one of those places where no amount of time seems like enough. Walking around the lake, I regretted not being able to spend more than a few days here. I needed to put it out of my head that I wanted to be here longer than four nights & just enjoy myself.

One reliable way to enjoy myself is to have a great meal. I hadn’t had anything to eat yet, and thanks to being three hours or so ahead due to jet lag, late morning was a good time for lunch.

One of Queenstown’s most famous food spots is Fergburger. Lines of tourists often stretch down the block, but at 10:30am, it was the perfect time to go. There was already a small line, but this was the best chance to have a burger. 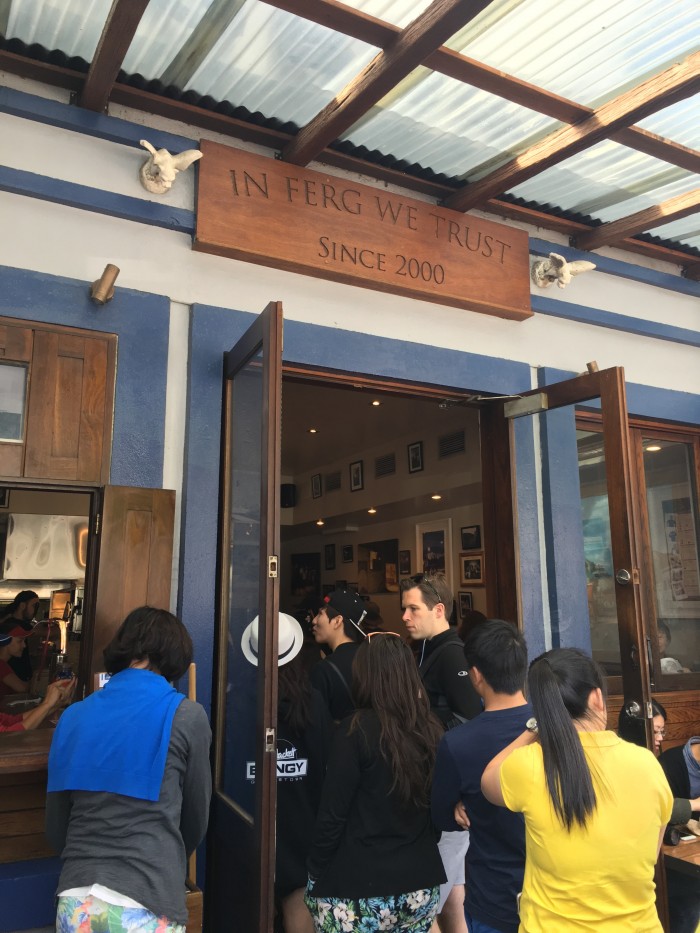 Fergburger has so many interesting burger options that it was difficult making a decision, but I eventually opted for the Big Al, a burger that “delivers a double serving of prime New Zealand beef (1/2lb), lashings of bacon, a whole lotta cheese, 2 eggs, beetroot, lettuce, tomato, red onion, relish & a big wad of aioli.” 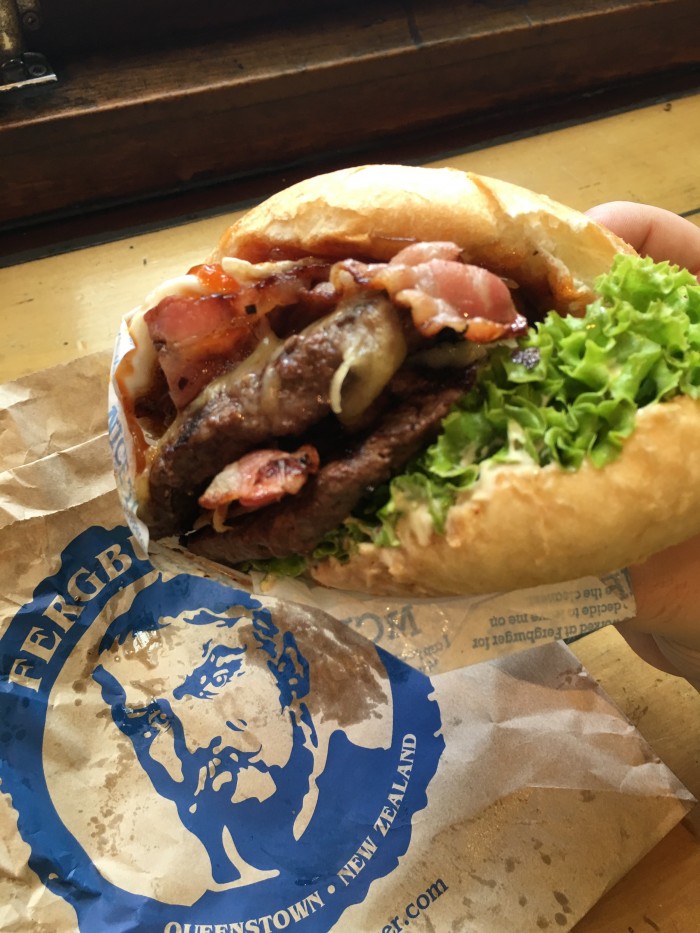 I had never had a hamburger with beets on it before, but a friend had told me I needed to try at least one, as it’s the thing to do in New Zealand. He was right, it was all tasty, but the problem was the beets made the whole thing even more slippery than a normal burger, so I got juice & sauce everywhere. When I was done, I looked like one of those models from the Carl’s Jr. commercials, except about 1% as sexy.

It’s easy to want to skip places where tourists are lining up, but Fergburger is the real deal. They also have a bakery & gelato shop next door. There are no lines there, and I highly recommend getting a few pies & other baked goods to go from the bakery before you hit the road each morning. That’s exactly what I did before I took a day trip to Milford Sound.

Speaking of hitting the road, after eating my burger, I wanted to figure out what else to do that day. I went into the tourist information center and was paralyzed by choices thanks to all the brochures they had. A few drew my attention, however, and then I took a Lord of the Rings tour around Queenstown.