The morning after I arrived in Stockholm for TBEX Europe 2016, I headed to the Visitor’s Center to get my welcome pack for the conference. Although it didn’t start for a few days, there were some perks to take advantage of including a transit pass and a Stockholm Pass, which gave unlimited 48-hour access to a variety of museums & other sights in the city, as well as hop-on-hop-off buses and boats around the harbor.

After walking around Gamla Stan (the Old Town) for a while, I boarded one of the green hop-on-hop-off boats that circle around the harbor. Since I boarded at the Royal Palace, one of the more popular stops, there was a queue, but I managed to get on the second boat that arrived. 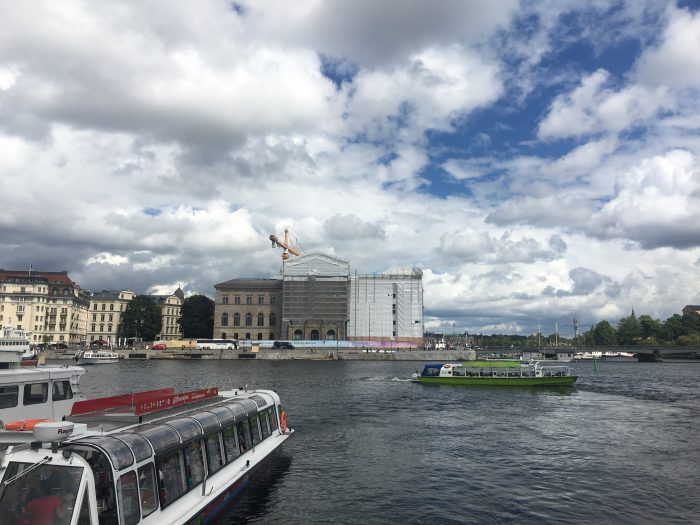 I purposely sat near only window that opened so I could take in the fresh sea air as well as take photos out of it. Although the boat made several stops all around central Stockholm, I stayed on the boat for a while since I knew I would be back at some of the places later, including the Vasamuseet, where the TBEX closing party was held. I wanted to get to one of the more intriguing places on my must-do list in Stockholm: Fotografiska. 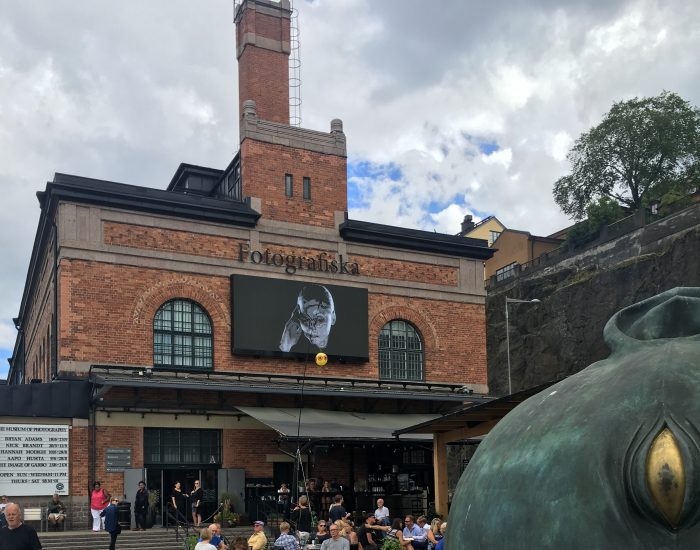 Fotografiska is a museum of contemporary photography that showcases work from some of the world’s best photographers. Located in the southern part of central Stockholm in the trendy Södermalm, tucked below a cliff, Fotografiska looks out over the water and surrounding islands.

Thanks to its location near the cruise ship ports, Fotografiska was busy on the day I visited, but not unpleasantly so. The gallery spaces are roomy, plus the onsite bar & restaurant are attractions themselves. Everything is open later than you’d normally expect from a museum, with weekday hours lasting until 11pm, and weekend hours going until 1am. It’s not often you can see a city’s sights this late, so if you’re trying to pack a lot of stops into a quick visit to Stockholm, keep this in mind. 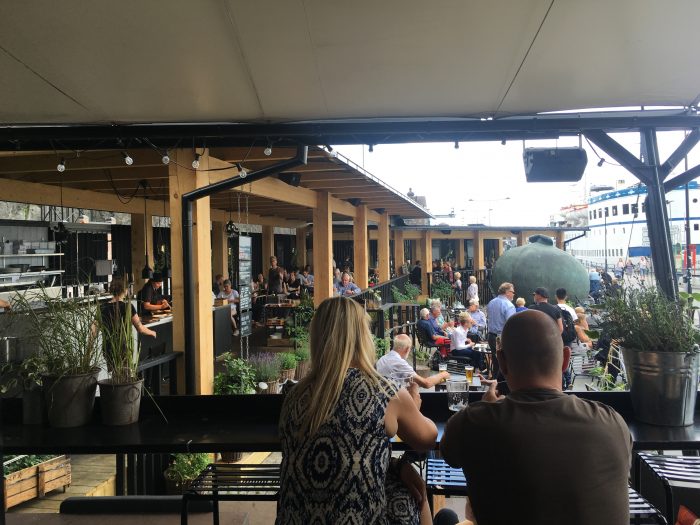 Since the exhibitions constantly rotate and there’s no permanent collection, each visit to Fotografiska is different. Here are some of the highlights of what I saw during my visit in July. By now, there are entirely new photography displays for you to see, but this should give you some idea of what you might find.

The first section I entered was called “Inherit The Dust” from photographer Nick Brandt. It was an epic story of our brutal exploitation of the planet. Brandt added animals to destroyed places around the world, which provided a contrast between nature & our human impact. As you can see, the combination is quite stunning. 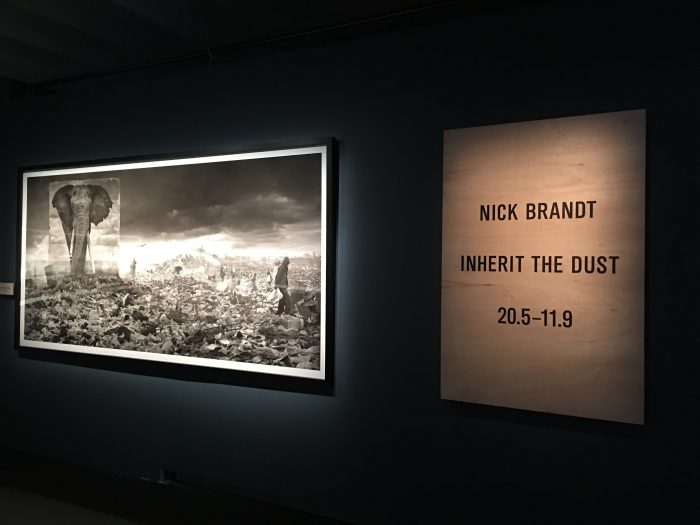 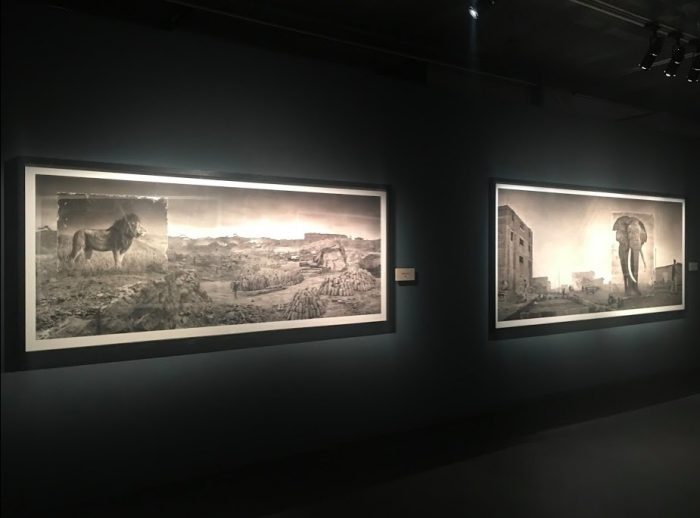 You might expect that these animal photos were inserted via Photoshop, but they were actually physically printed and taken to each location. 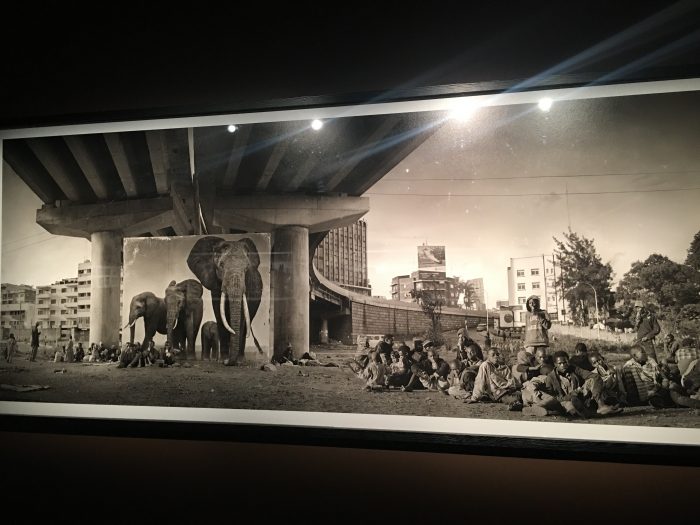 Inside the gallery, there was a video room where a documentary about the exhibition was shown, narrated by Brandt. Thanks to the layout, the narration actually flowed throughout the rest of the area, helping provide useful context behind the photographer’s thoughts. Intentional or not, it’s something I’d like to see in more museums, provided the thoughts about the process are real and not just some pretentious B.S. like you might hear from some artists.

Part of the video addresses racial and privilege issues with Africa. Can anyone else judge people who are trying to improve their situation in life when we have destroyed our own lands first? Questions like this are part of the appeal of Fotografiska. It’s not just meant to be a place where you look like photographs, but also a place where you consider modern societal issues.

Watch both of the videos about the creation of Nick Brandt’s “Inherit The Dust” below:

INHERIT THE DUST : Behind The Scenes, by NICK BRANDT from Nick Brandt Photography on Vimeo.

If you’re interested in learning even more about Nick Brandt’s work, he also did a talk during the opening of the show at Fotografiska.

Other exhibitions such as Ake Ericson’s photos of Roma refugees were also serious in nature. 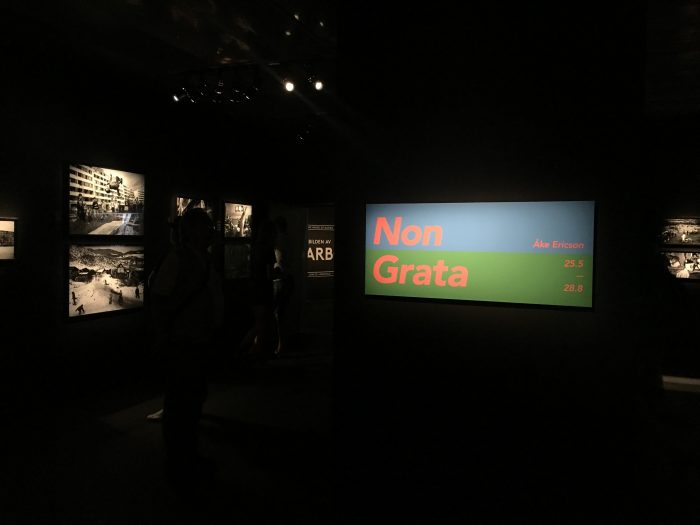 That said, there is a balance that lightens the mood & gives something to everyone, whether you’re interested in political & social issues or pop culture. One such exhibition was dedicated to images of Greta Garbo. Not only could you view photos from throughout her life, you could even sit and relax and watch her movies. 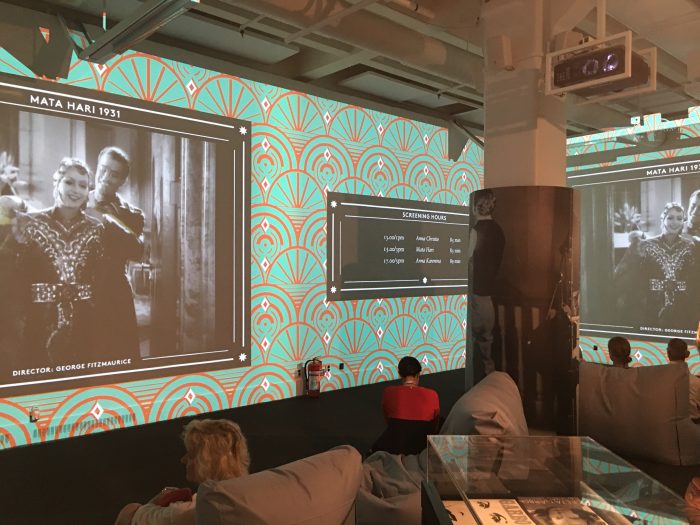 The final large exhibition I visited at Fotografiska was an exhibition by Bryan Adams. Yes, that Bryan Adams. While most people know him from songs such as “Summer of ’69”, Adams is now an acclaimed photographer. Much of his work deals with celebrities, which makes sense given his first career.

The entrance to the exhibition featured separate short films that Bryan Adams had created starring actors Michael Shannon & Danny Trejo, talking about themselves, their hobbies, and their craft. You can watch Michael Shannon in “New York, 2012”, and “Onions Don’t Make Me Cry”, starring Danny Trejo, below.

Moving further inside, the exhibition featured lots of Adams’ photographs of celebrities. 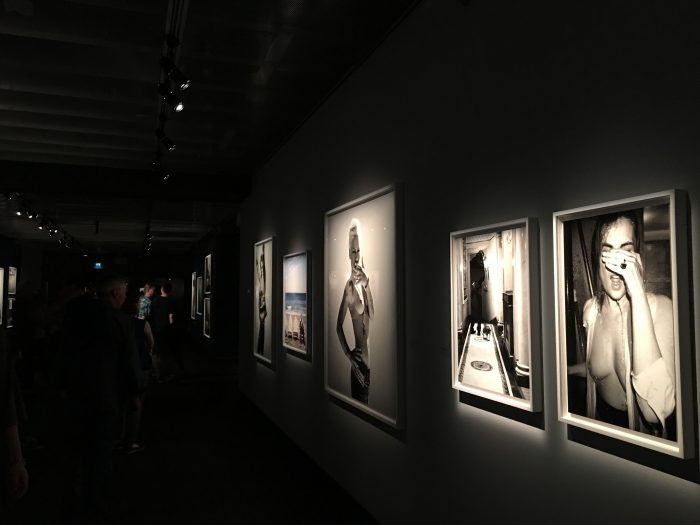 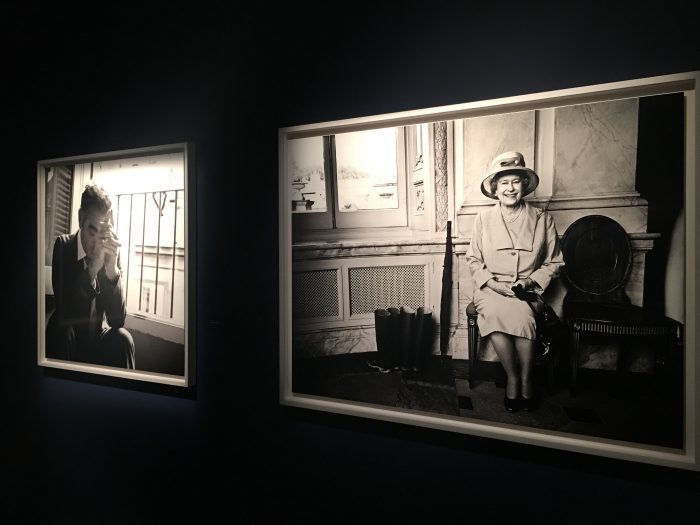 Lest you think that his photography is solely celebrity focused, the next section of Bryan Adams’ work became much more serious & important. Here, the walls are covered in photographs of injured war veterans from the United Kingdom.

It’s tempting to look away or even skip this area entirely. However, these brave men & women put themselves out there both when they served, as well as when they posed to have their wounds shown to the world, so it would be a disservice to ignore their sacrifices. Tying this back to celebrities, Tony Blair & George W. Bush should be forced to visit this gallery so they can see firsthand the impact of their decisions to go to Iraq. 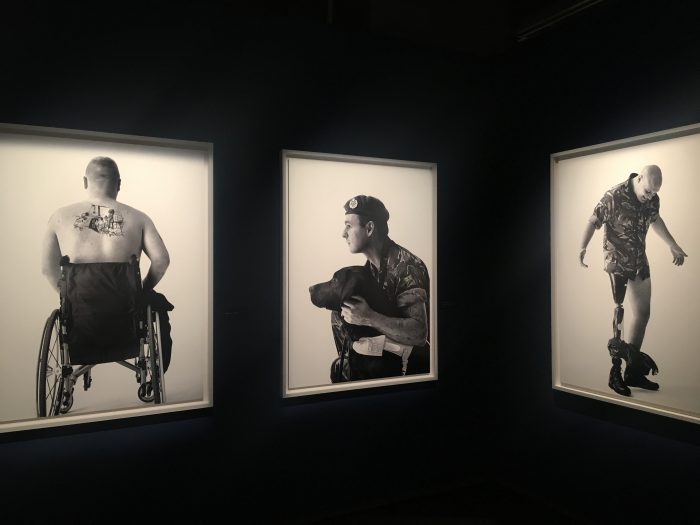 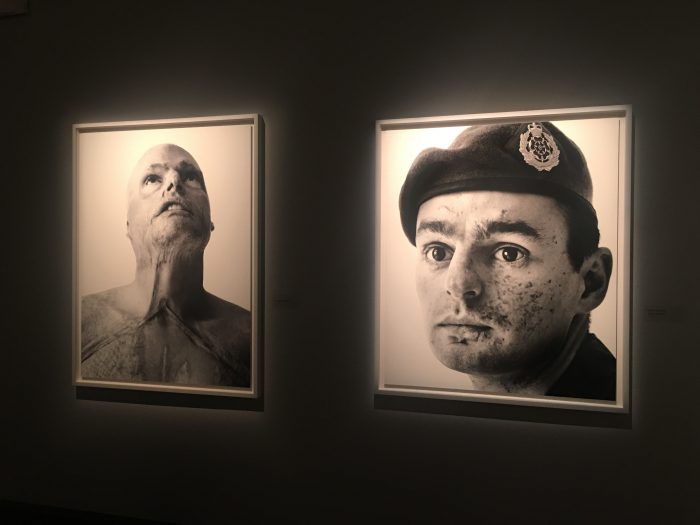 Another exhibition by photographer Hannah Modigh called “Hurricane Season” dealt with the impact and specter of natural disasters. 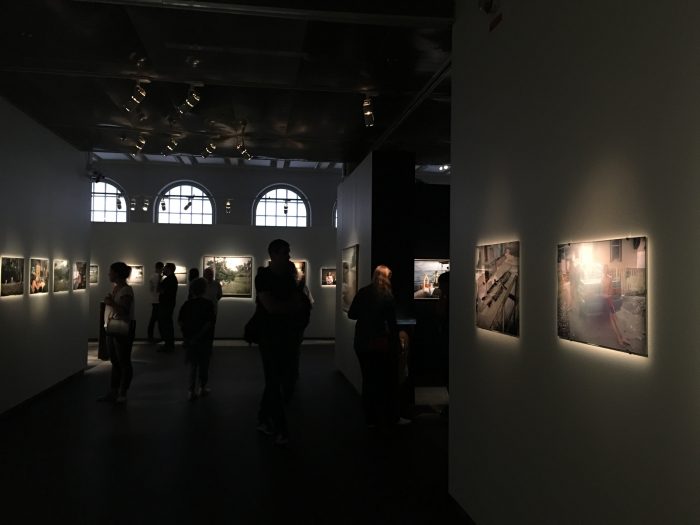 Due to the nature of being focused on contemporary photography, Fotografiska takes advantage of a unique opportunity to raise funds: a photo booth. This is genius, and it ties in brilliantly with the facility, as how many art museums let you actually create within the space? 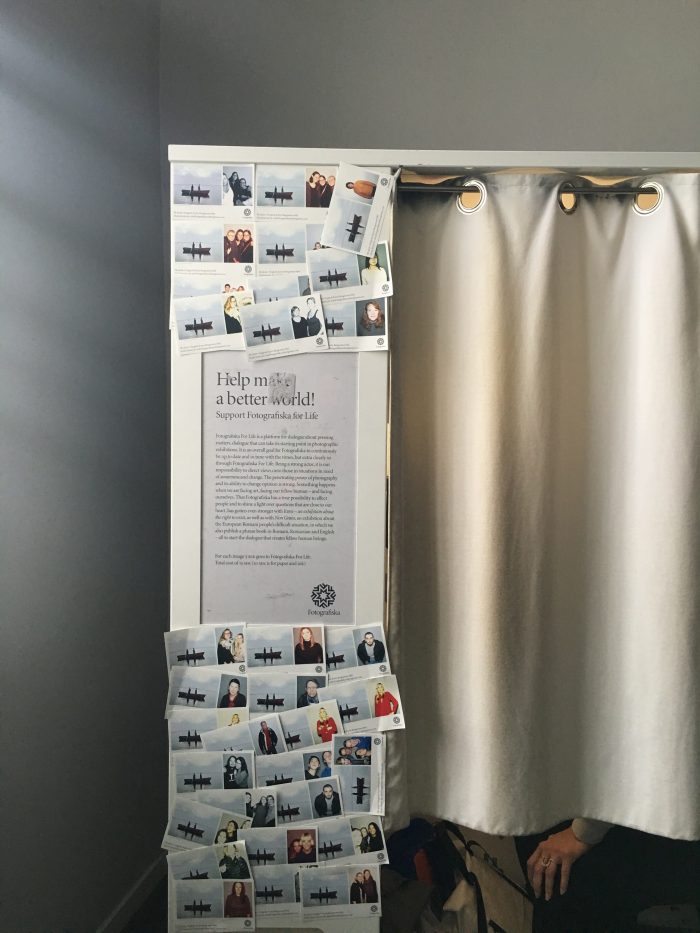 While the large exhibitions focus on well-known photographers, there is also space to showcase up-and-coming talent, such as Young Nordic Photographer of the Year 2016, Aapo Huhta, whose work made interesting use of contrasting light & shadows. There was a huge gift shop filled with photography books as well. 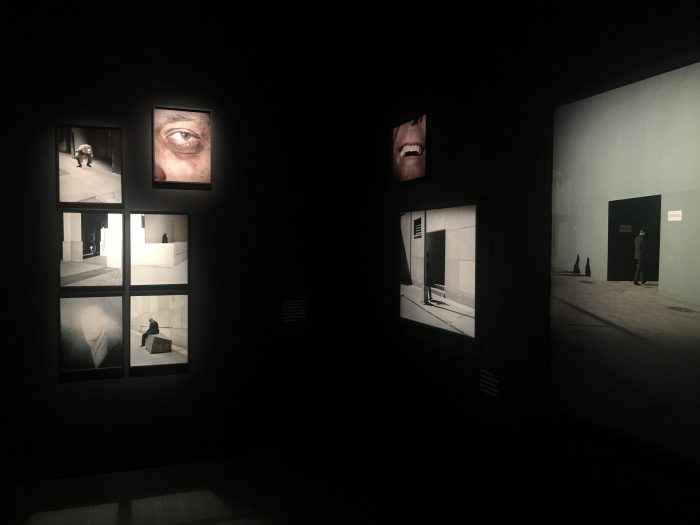 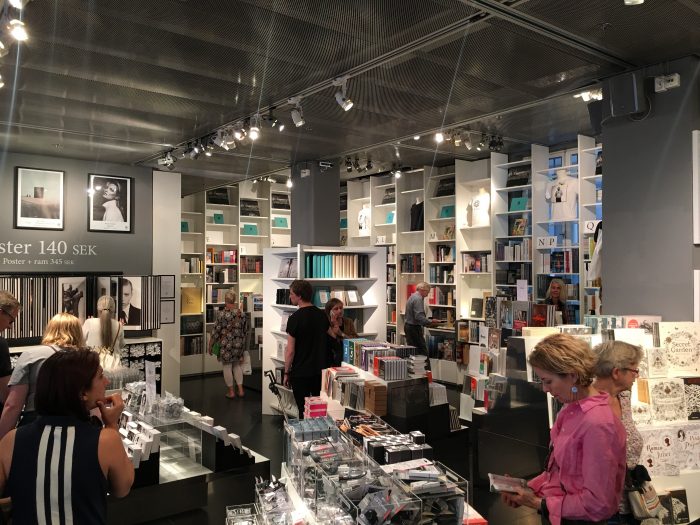 After visiting Fotografiska, it had started to rain. Rather than walk back to central Stockholm, I got back on the green hop-on-hop-off boat back to where I started at the Royal Palace. The entire circle of the harbor takes about an hour, though by this point I had done all but the last 10 minutes of the loop. This was just enough time for the rain to stop. 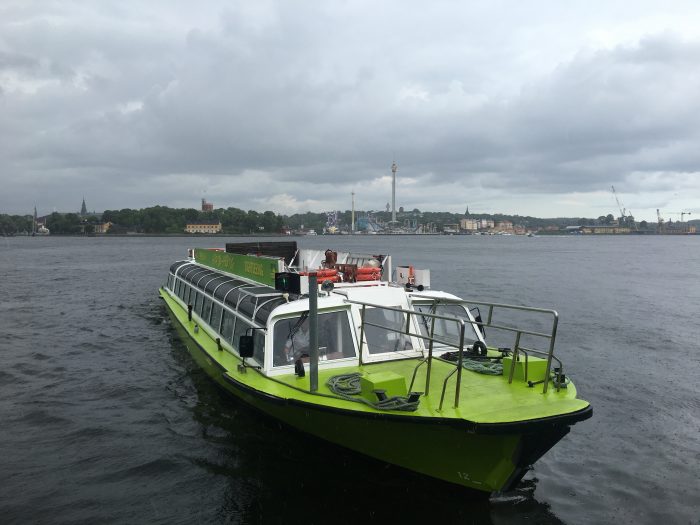 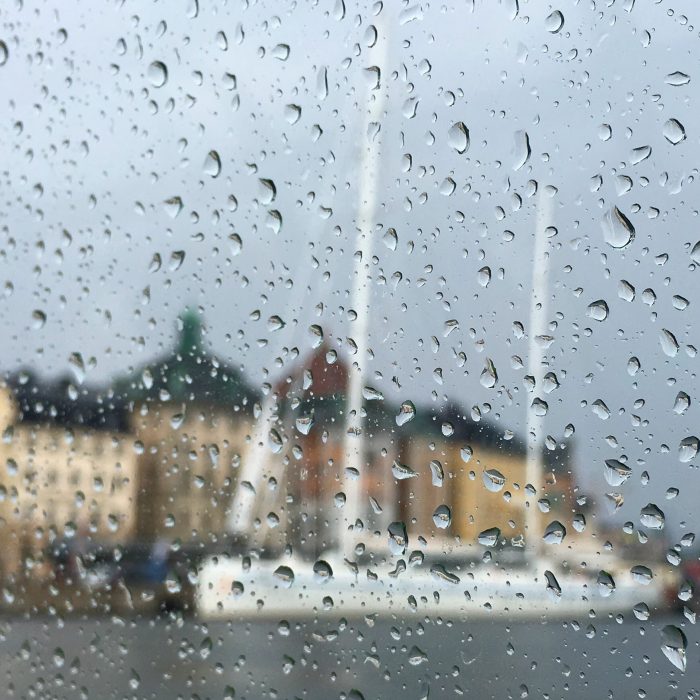 Fotografiska is an essential stop in Stockholm for any photography lover, anyone who enjoys art in general, or anyone who is connected with social & political issues. While there are plenty of ways to get to Fotografiska, the hop-on-hop-off boats are a great way to see Stockholm from the water, especially if you have the Stockholm Pass.