My trip to Portugal began with a United Airlines flight from San Francisco to Denver. Thanks to being on a business class award ticket, I was taking a bit of a circuitous route to Porto, flying from SFO to Denver to Frankfurt to Geneva to Porto. This first leg was originally supposed to be in economy, but I hoped that since it was on a Boeing 787-9 with tons of upgrade options, I’d be able to speak to someone at check-in and explain that there hadn’t been any availability when I booked & ask to be put on a list. I got to the airport even earlier than usual hoping this would help.

Upon checking in at SFO, I managed to be upgraded to Economy Plus, which was at least progress. You don’t normally see Boeing 787s running domestic routes, so when they are scheduled, upgrades can be easy. Thanks to being at the airport so early, I visited the SFO Amex Centurion Lounge after checking in. 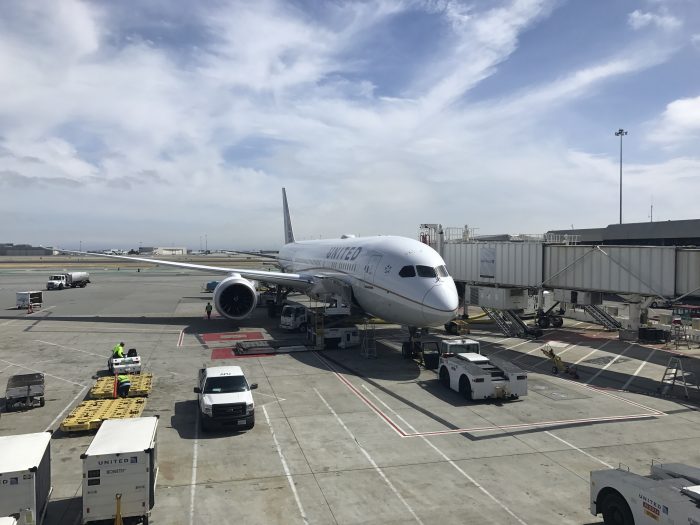 About 50 minutes before departure, I arrived at the gate to find that preboarding had already started. I checked out the monitors and saw that I had been upgraded to what United was calling first class on this flight, but what I knew to be United Polaris Business Class. My patience had paid off, I would be flying in business class for my entire trip to Europe, starting off with this United Boeing 787-9 flight from SFO to Denver.

Unfortunately, since I hadn’t made it to the gate early enough, I was near the tail end of the business class boarding group, so I wasn’t able to take as many photos of the cabin as I normally would. The Polaris business class cabin on United’s 787s is arranged in a 2-2-2 format, consisting of 8 rows. There are two sections of business class, separated by bathrooms in between. I was in the smaller back section, in seat 7L. 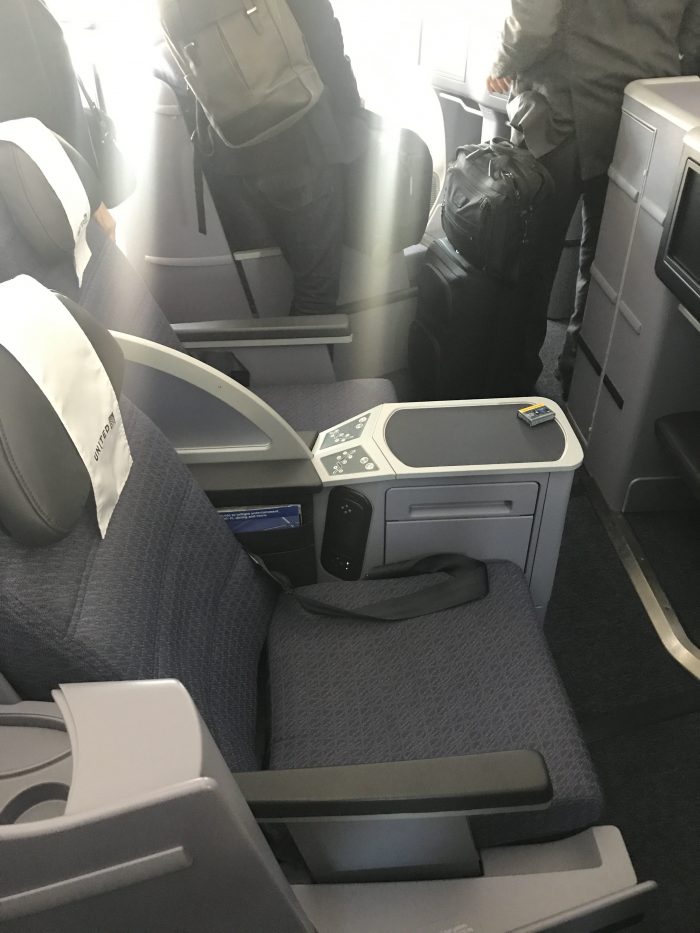 The sets of seats are angled towards the windows a bit, which there are two of for each row. The seats lie flat, but I had no need on such a short trip lasting about 2 hours. 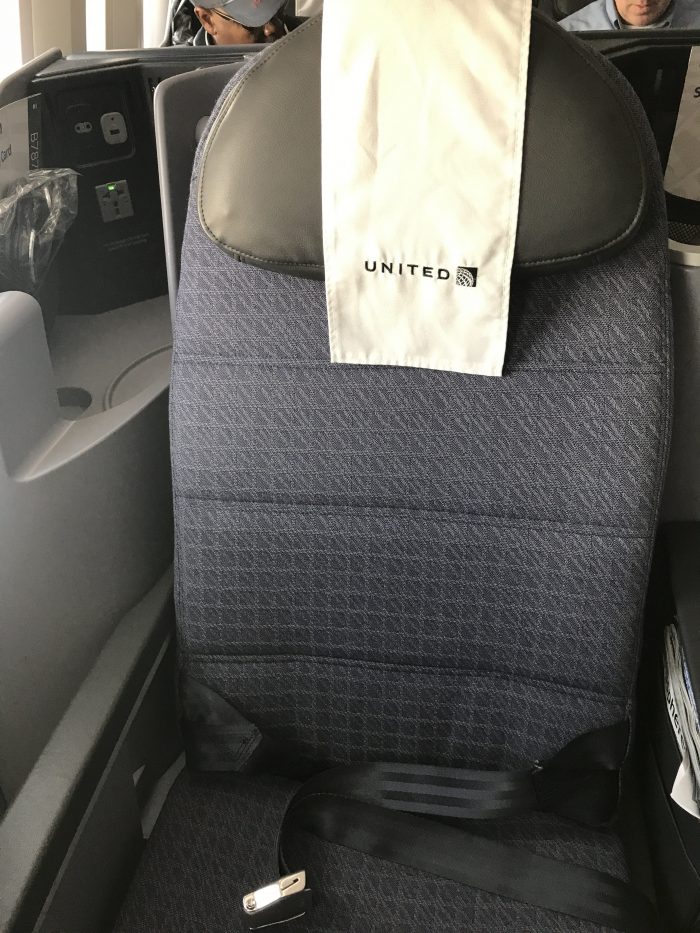 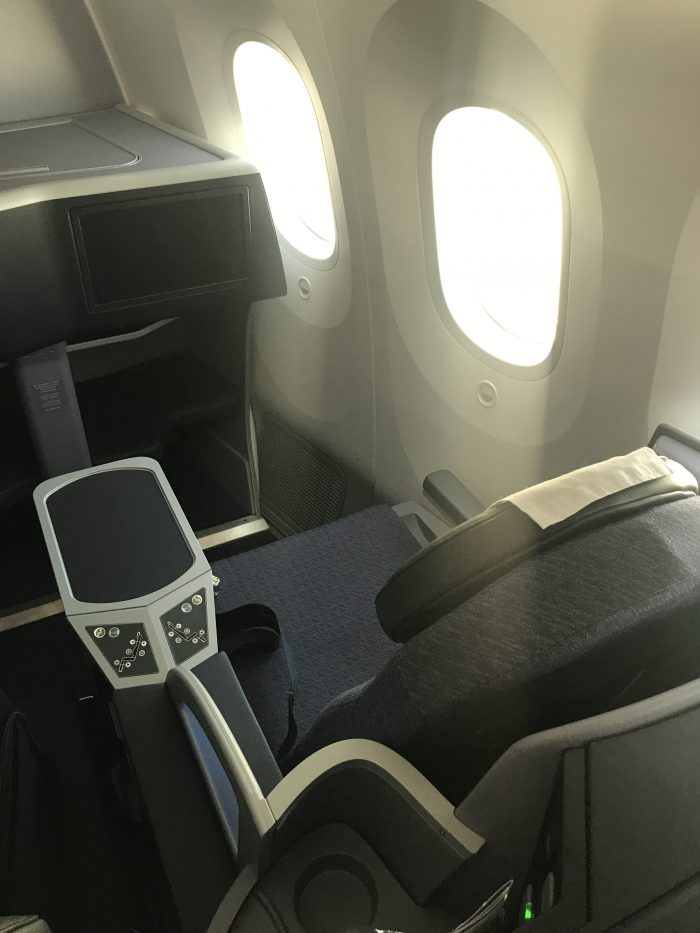 While we waited to depart, our friendly flight attendant Kirsten served drinks. I had a club soda. While any kind of a pre-takeoff drink is good, it’s nice to be able to select what you want rather than take from a tray.

I was able to watch one movie on the flight (Fences). The seat has a nice sized video screen. 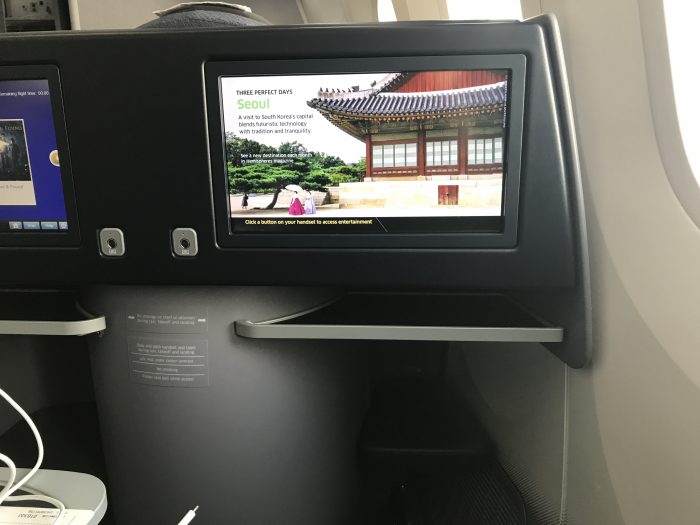 Power outlets, a bit of storage, and a drink holder are located over your shoulder. 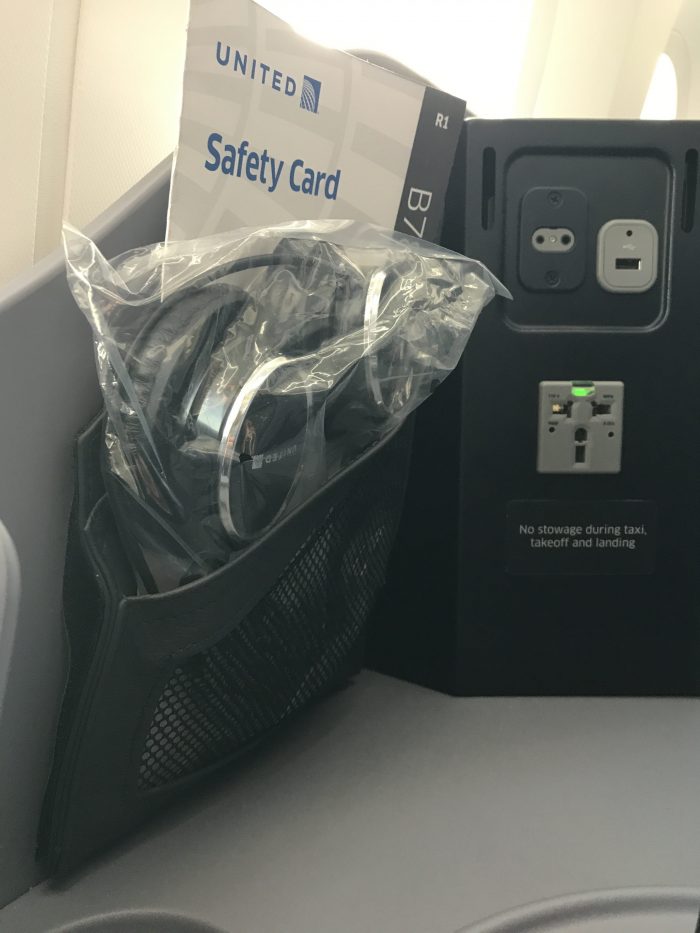 Not long after takeoff, Kirsten took lunch orders. There were two options: shrimp salad or a warm roast beef sandwich. Since it was healthier, and I didn’t know when else I would have vegetables on my trip, I opted for the shrimp salad.

Unfortunately, my attempt to be healthy was thwarted because they didn’t have enough salads left. Since it was a last-minute upgrade, I couldn’t really complain. If there are only a couple of meal options, it’s not surprising that they might run out as they reach the back. I can, however, complain about the guy sitting next to me, who had originally asked for the roast beef, then got fussy about what was going to be on it. He then opted for the salad, which would have been mine. After all of that, he only ate the shrimp and left the salad.

Meal service began with a warm towel, which was quickly followed by warm nuts. I also had a beer, which was 12th of Never by Lagunitas. I always appreciate it when airlines manage to have a good beer, since it’s such a rare occurrence. 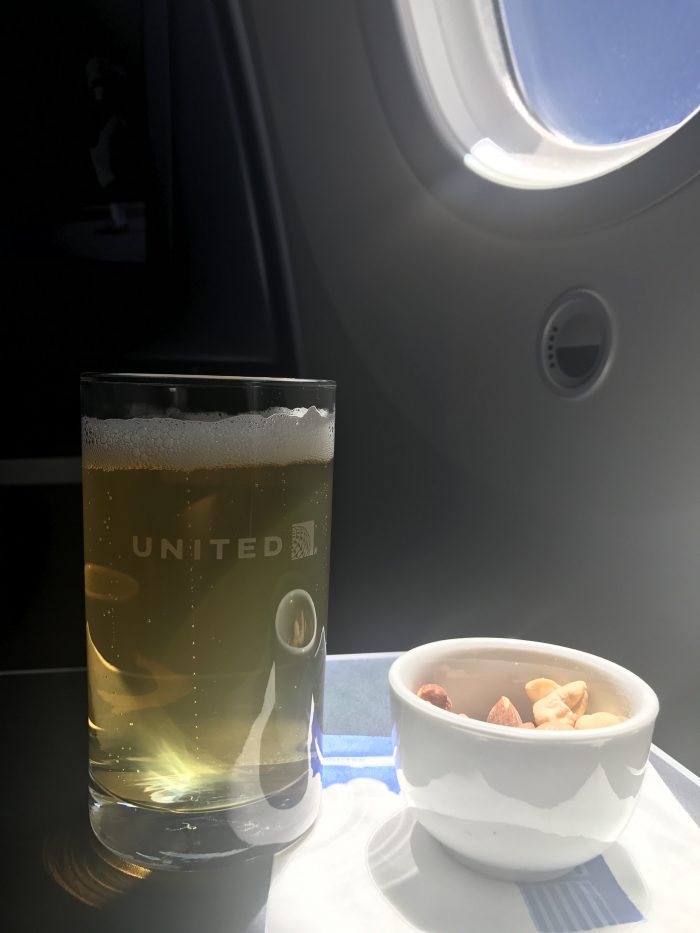 The rest of the lunch was all served at once. There was a small salad, a nice bunch of grapes, a pretzel roll, and the sandwich. The sandwich was pretty soggy by the time it got to me, which is an unfortunate consequence of serving a hot sandwich on a plane. 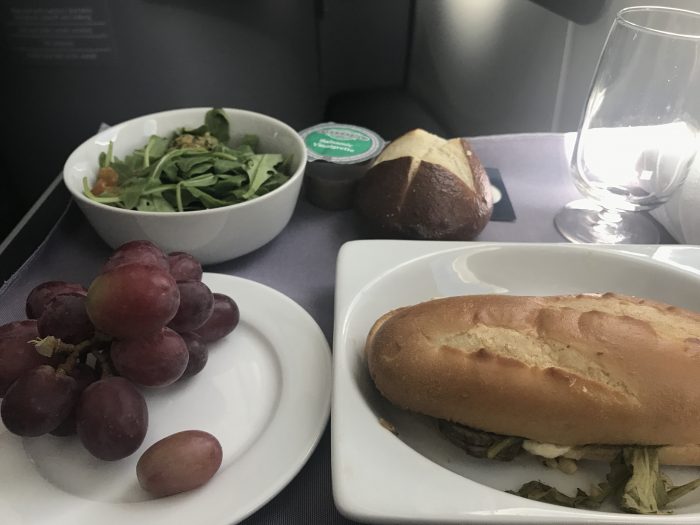 There was also a warm chocolate chip cookie for dessert. It was great. 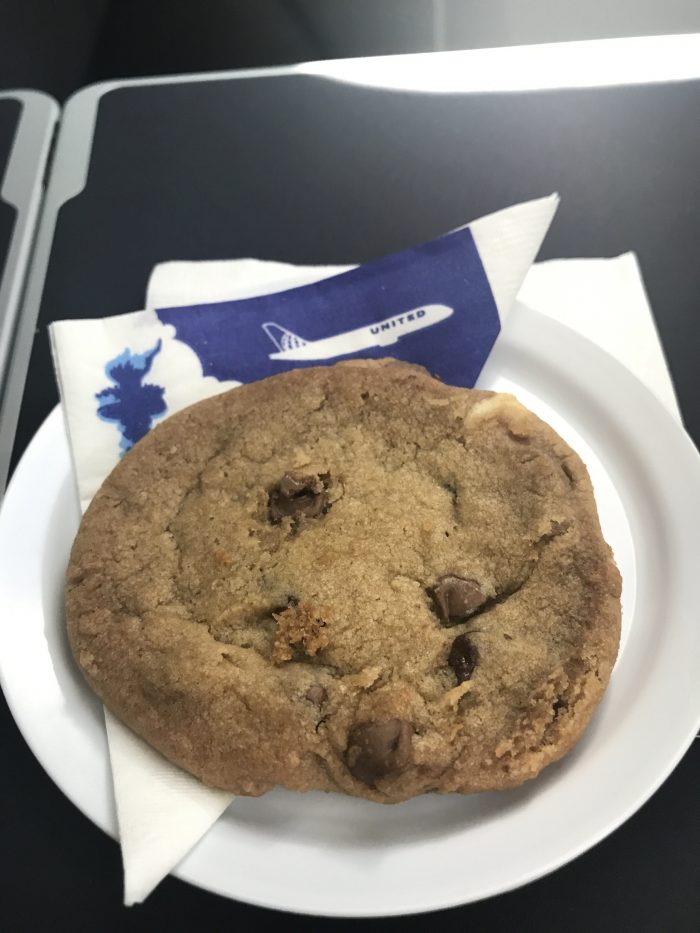 About 40 minutes into the flight, there was strong turbulence, which meant that service was suspended. Fortunately, all the meals had been served by this point, but it made it a bit difficult to eat. I ended up finishing my lunch not long before the descent into Denver.

Just before landing, the flight attendants passed out little boxes of mints. The box was covered in ads for United’s Chase credit cards, but hey, free mints. I’d much rather have that than an intrusive announcements, and it’s nice to have something to help a bit with the pressure during descent. 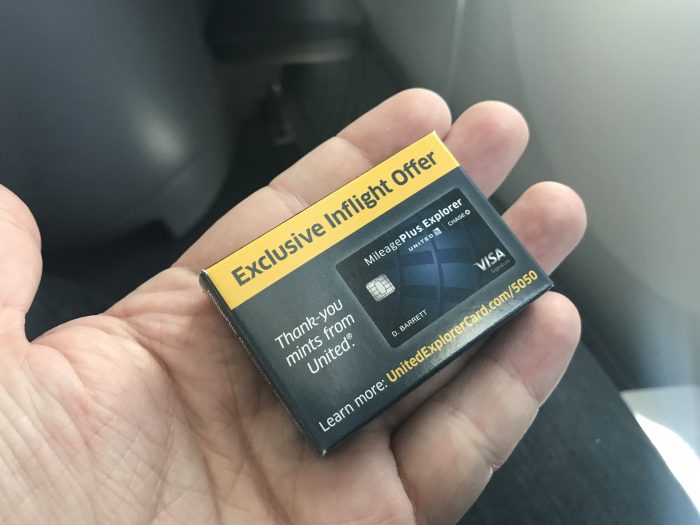 While this 2-2-2 Polaris seating arrangement might not be the greatest business class configuration for a long-distance 787 flight, it’s great on a short domestic flight like this one from San Francisco to Denver. The opportunity to fly on a great plane like the 787 domestically is why it’s a good idea to pay close attention to the available aircraft when you’re making a booking, as there are more upgrade opportunities & it’s just a nicer plane in the first place.