The historic Gothic Quarter of Barcelona is an easy place to get lost & to lose yourself. There are ancient sights around every corner, interspersed with museums, bars, and restaurants. Here are my top 10 things to do in Barcelona’s Gothic Quarter & the nearby area.

The central focal point of the Gothic Quarter of Barcelona is the massive Barcelona Cathedral. 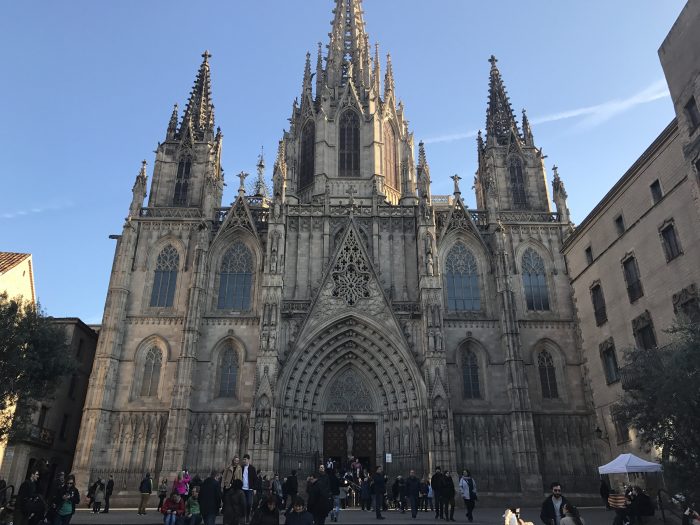 Construction of this Gothic cathedral lasted from the 13th century to the 15th century. Prior to that, a church of some incarnation has stood here for over 1,500 years. The history of this area of Barcelona goes back over 2,000 years.

Passing right next to Barcelona Cathedral is one of the most iconic streets in Barcelona’s Gothic Quarter, Carrer del Bisbe. Above this narrow street is the Pont del Bisbe, which connects a couple of government buildings. 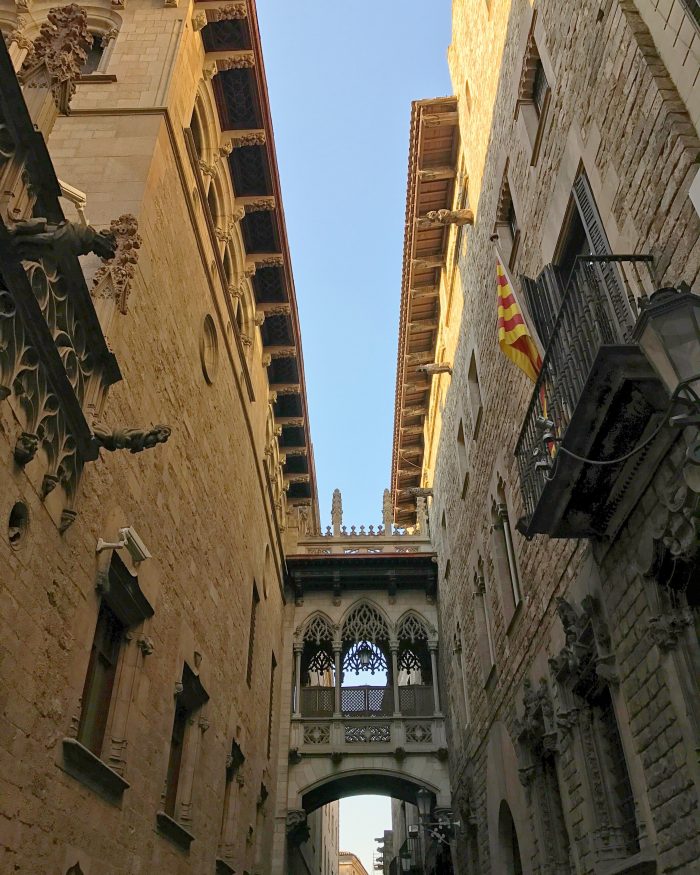 Around the corner from Barcelona Cathedral & Carrer del Bisbe is one of the most hidden sights in the Gothic Quarter of Barcelona. It’s also one of the oldest. Follow the signs & along Carrer del Paradis, and you’ll find the Temple d’August. 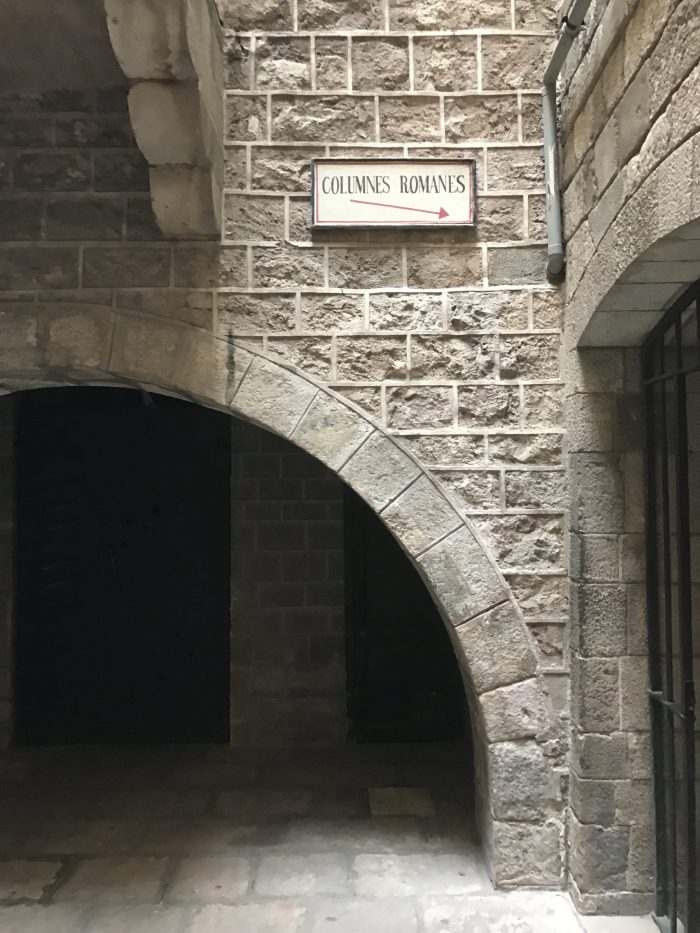 Before you even get there, you’ll spot little gems such as this wall carving of Sant Jordi, the patron saint of Catalonia. 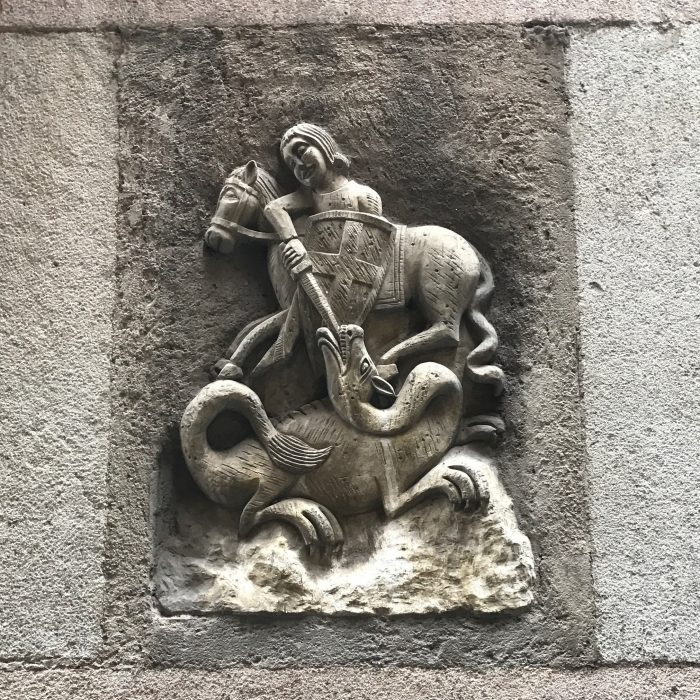 The city of Barcelona has grown up around this Roman temple. The columns have been restored to their former glory in this little courtyard. 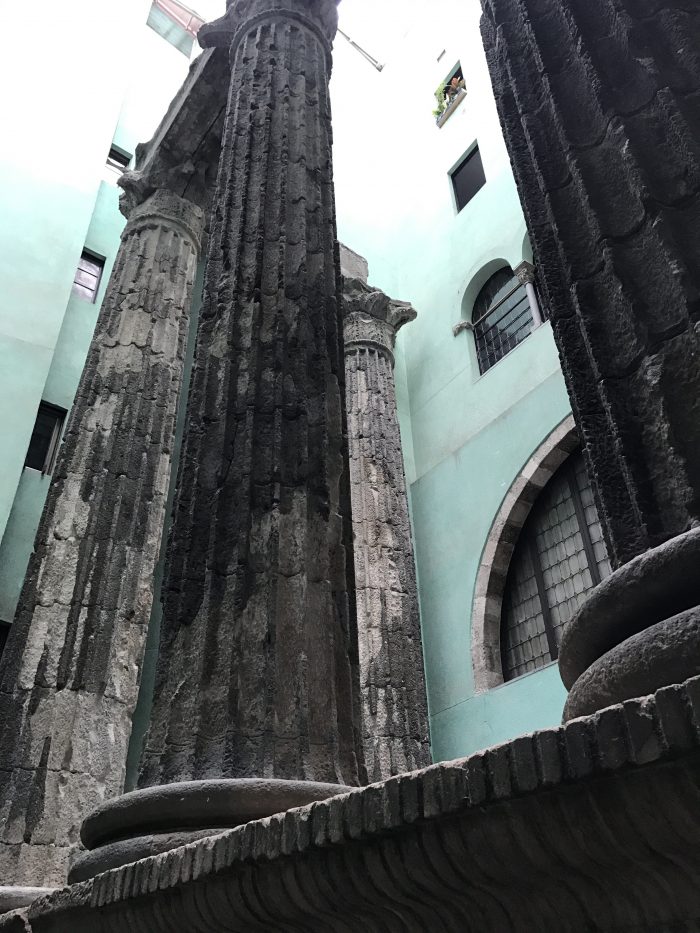 Few people stop back here to explore, since the Roman Temple isn’t visible from the street. As a result, it’s a nice quiet spot in the dense center of Barcelona. It’s a city that rewards wandering & looking down random streets, and nowhere is this more true than the Temple d’August & the surrounding streets.

Museum of the History of Barcelona

Visit the Gothic Quarter of Barcelona and part of the Museum of the History of Barcelona is actually below you. While there is a nice, unassuming building with exhibits about the city & it’s history, the most intriguing part of the museum isn’t immediately visible. 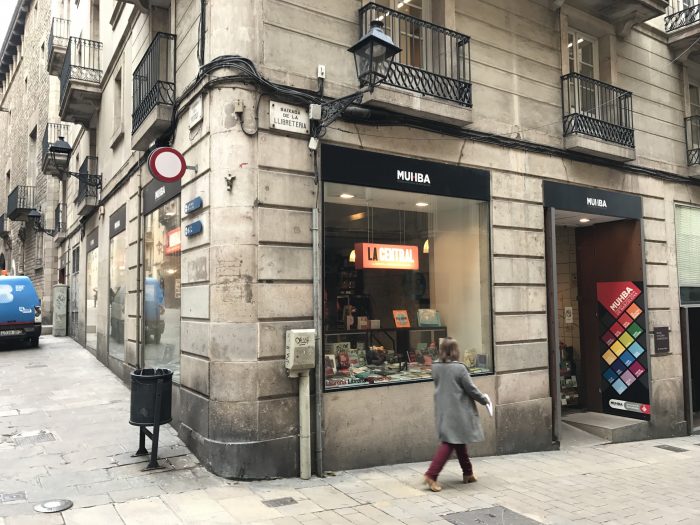 Walk through the attached bookstore, pay your €7 entry (good for one year and also gives access to all other MUHBA-affiliated museums, so it’s not a bad value at all), then head inside. I don’t often feel this way, but be sure you grab the audio guide for translation & more details about everything inside. I’ve always thought that city museums are an excellent way to learn about the history of a place. The Museum of the History of Barcelona is no exception. The exhibits start with an introduction, then a video called Barcelona: History of A City. After the video, an elevator takes you down to the main level of the museum.

It’s on this basement level that the spectacular expanse of the museum comes to life. The building, and in fact several others nearby, were all built on the ancient ruins of Barcelona. 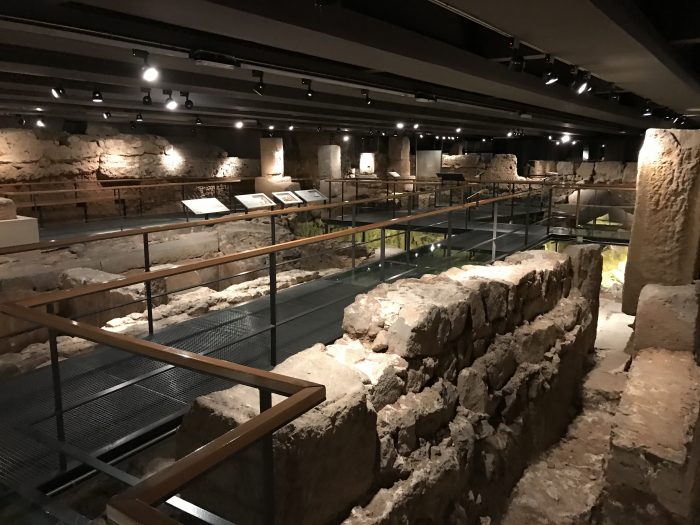 All around you are archeological remains from thousands of years of inhabitants of Barcino during the Roman times dating all the way back to 12 BC, then Barchinona when the Visigoths ruled, and now finally Barcelona. You’ll find houses, a laundry area, baths, a fish factory that made garum fish sauce, a church, a winery, and so much more. 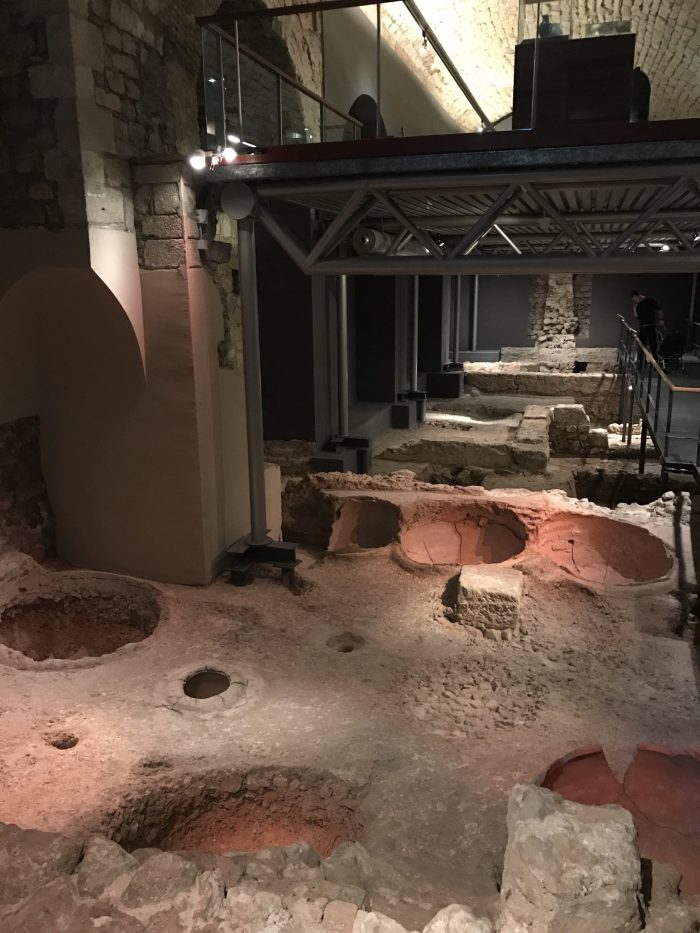 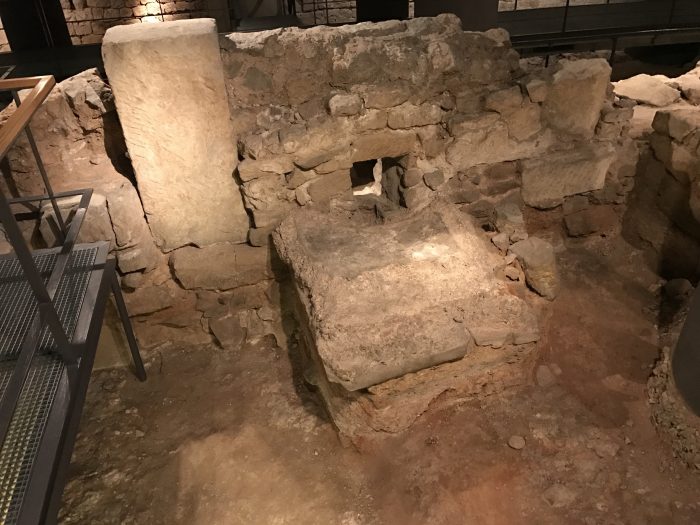 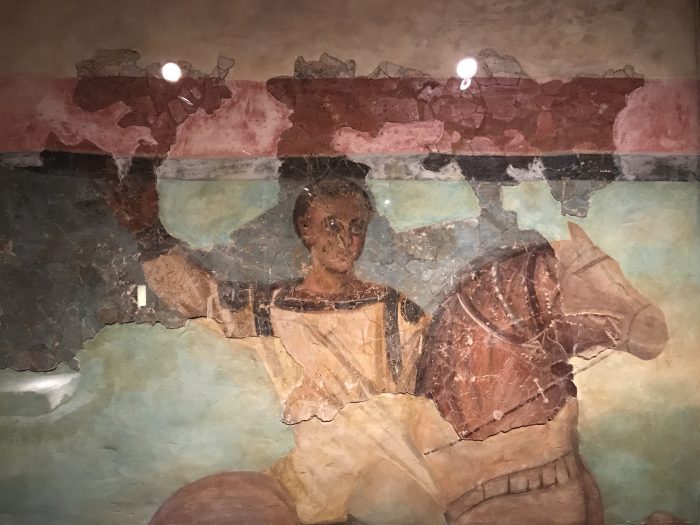 By the time you exit, you’ll be back at the ground level, exiting at the Plaza del Rey. 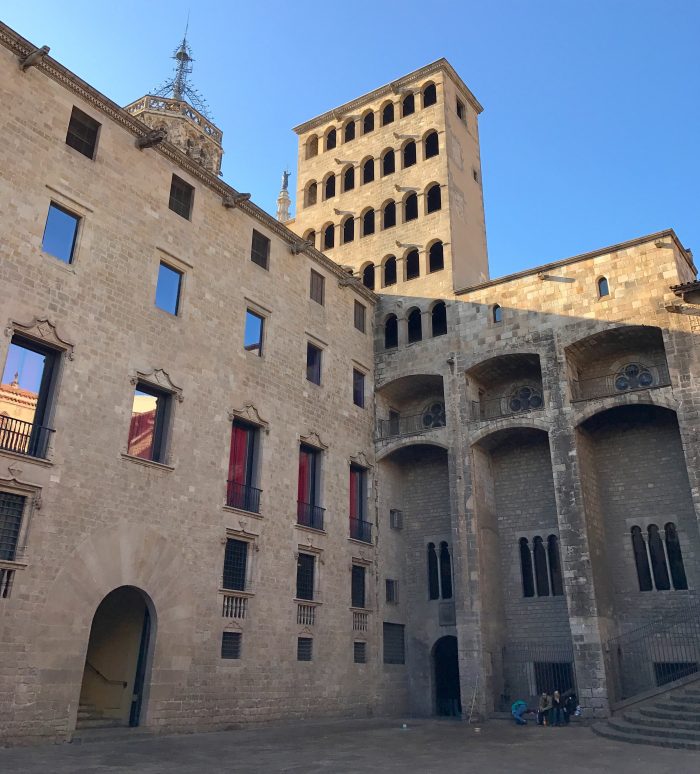 Everything is preserved & displayed well, so you can get a sense of what this area was like in a former life. It even goes beneath the foundation of the Cathedral. The museum & ruins are a massive space that you’d never imagine existed from the outside. It’s easy to walk right past all of this history, but be sure to visit it if you’re in the Gothic Quarter of Barcelona.

Winding around the Gothic Quarter of Barcelona are the remains of the city’s Roman Walls. Follow the maps on the signs & you’ll be able to spot several large sections of them. 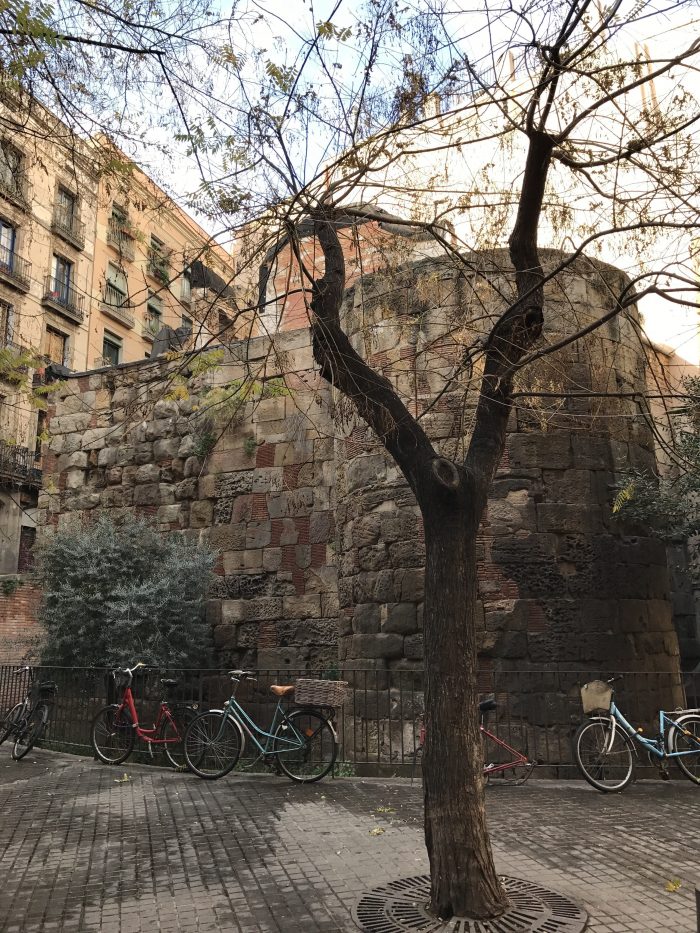 Just off La Rambla is Plaça Reial. The plaza is surrounded by bars & restaurants, serving as one of the nightlife hubs of the Gothic Quarter. 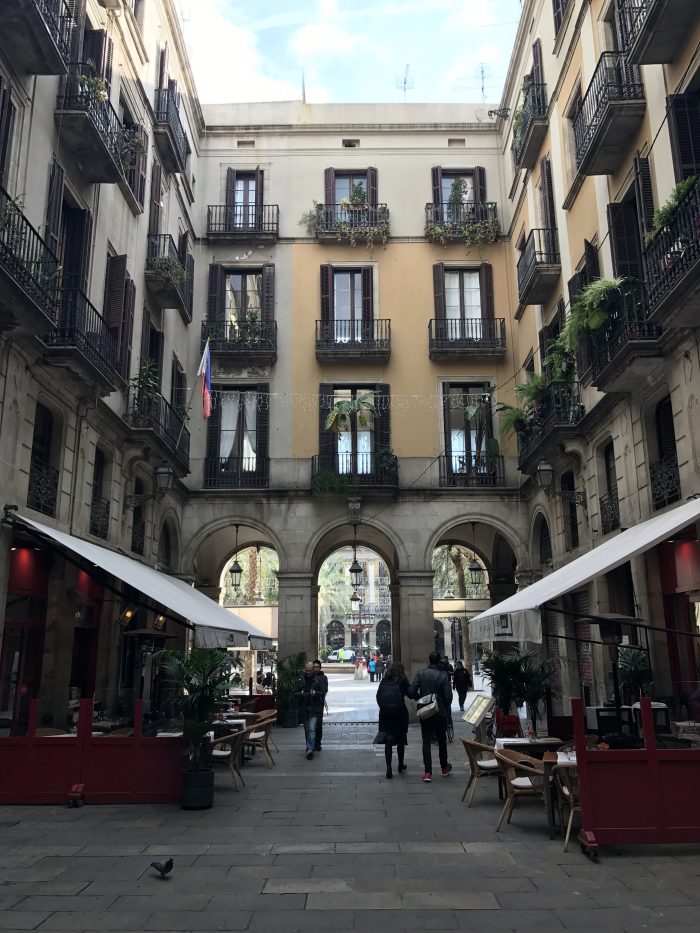 In the center of Plaça Reial is a fountain, plus several street lamps designed by Barcelona’s iconic architect Antoni Gaudi. There are many more places to find his work at a larger scale around Barcelona, especially at the famed La Sagrada Familia. 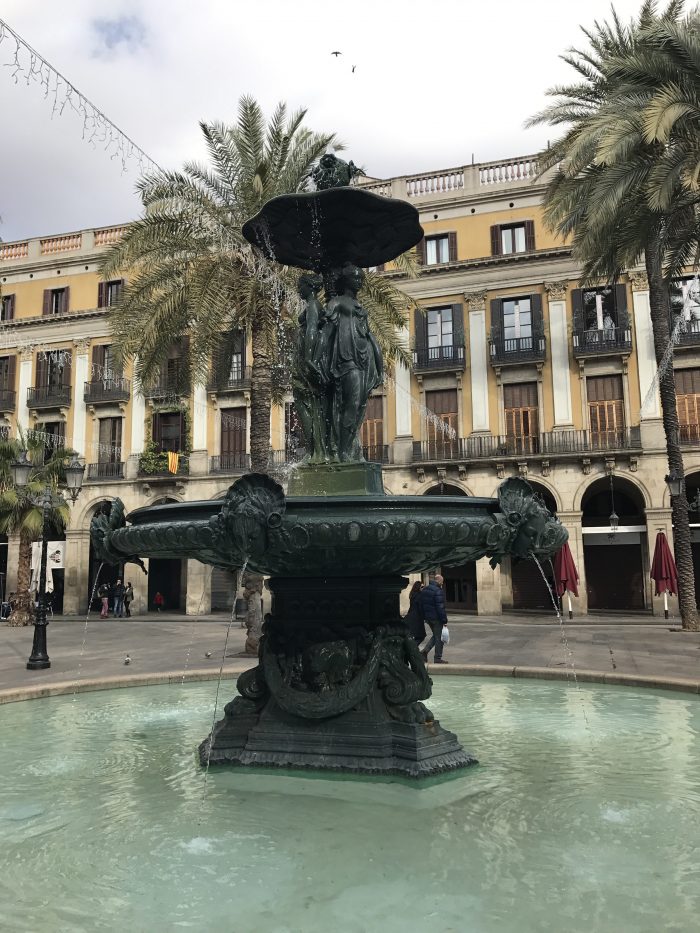 The 14th century Basilica de Santa Maria del Mar is technically just outside of the Gothic Quarter, just across Via Laietana. Entry is €8, but this includes access to the roof as well. 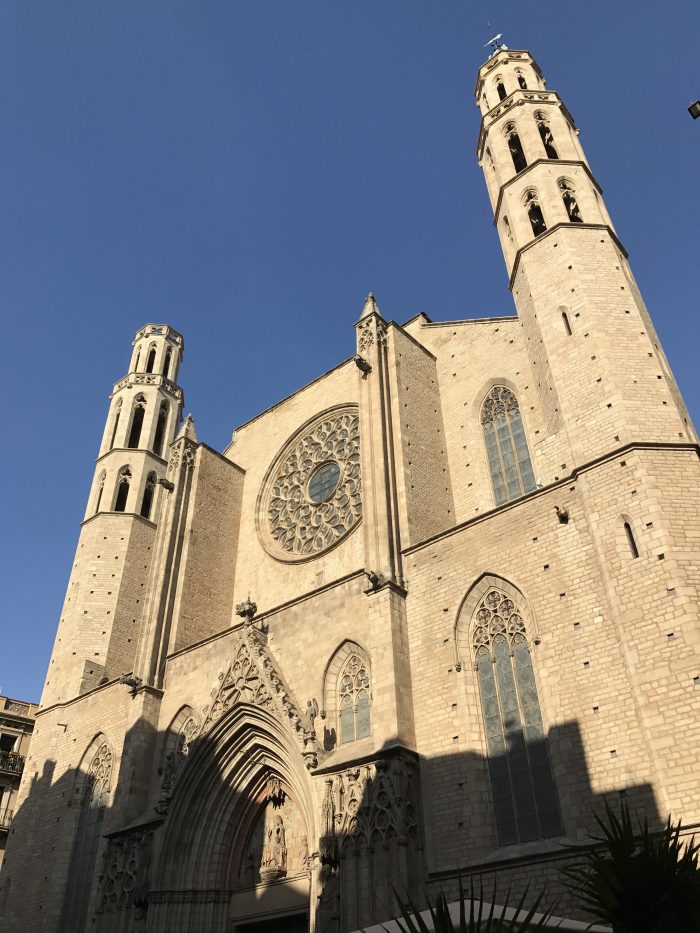 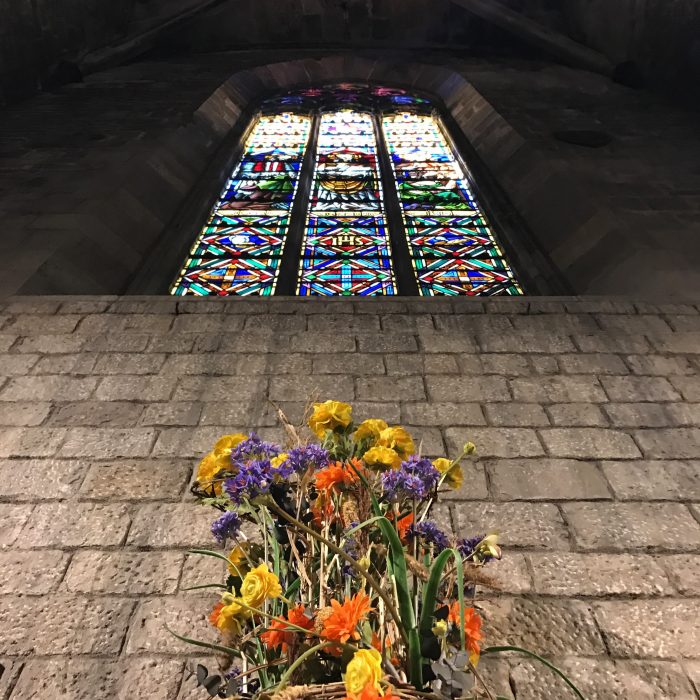 Basilica de Santa Maria del Mar isn’t on the radar of a lot of visitors, but the inside is pretty & bright. Fires & bombings have taken their toll on the church over the years, but it has since been fully restored. 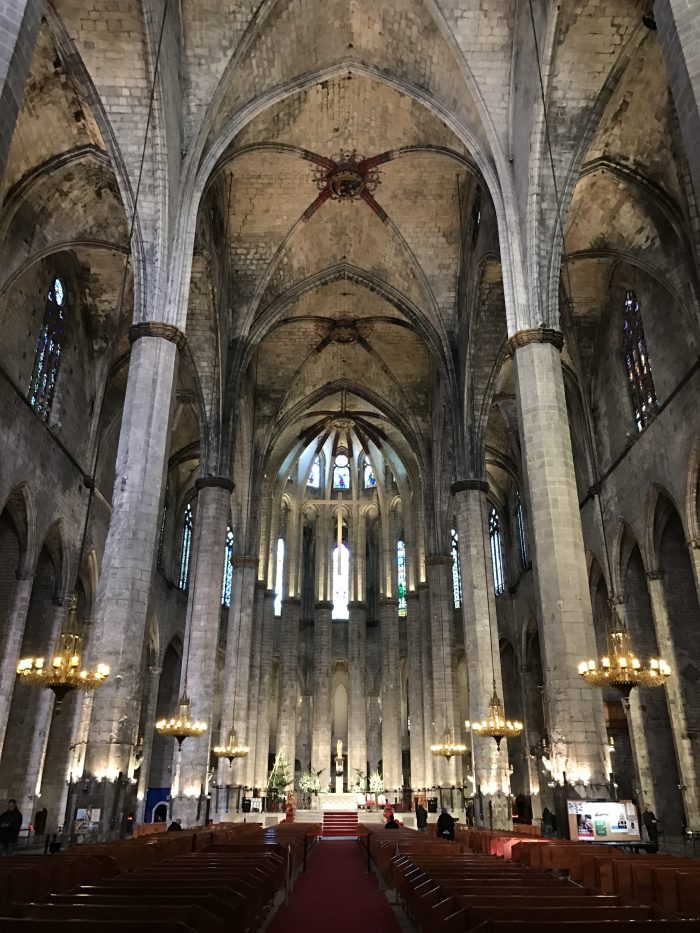 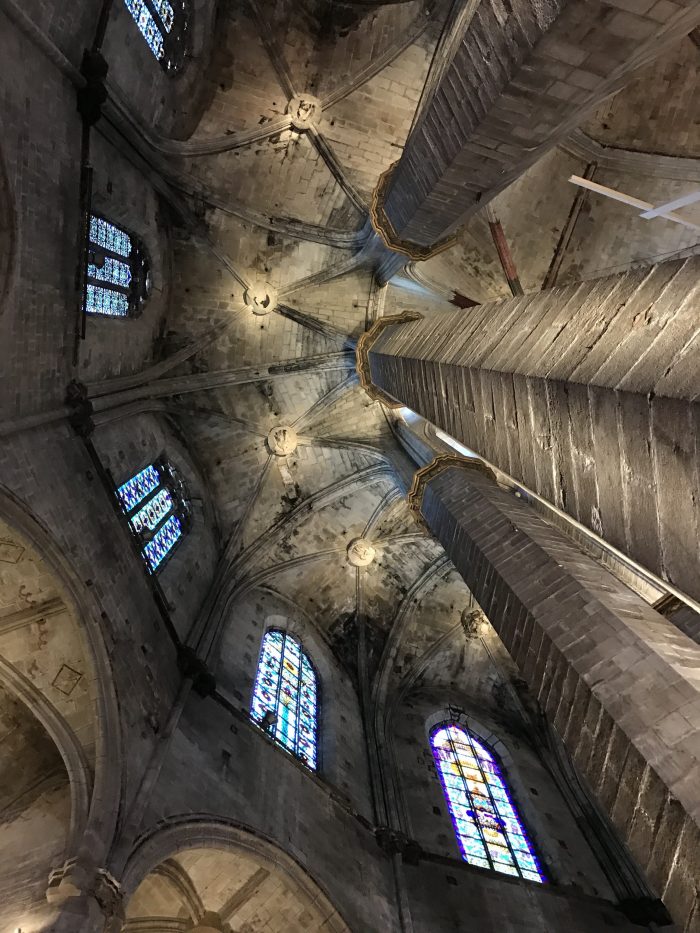 Tours of the rooftop provide great views across the entire area.

The crypt now houses a massive big screen TV, making it the best place in Barcelona to watch the Super Bowl.

La Xampanyeria is also just outside of the Gothic Quarter, near the waterfront & Barceloneta, but it’s quintessential Barcelona. 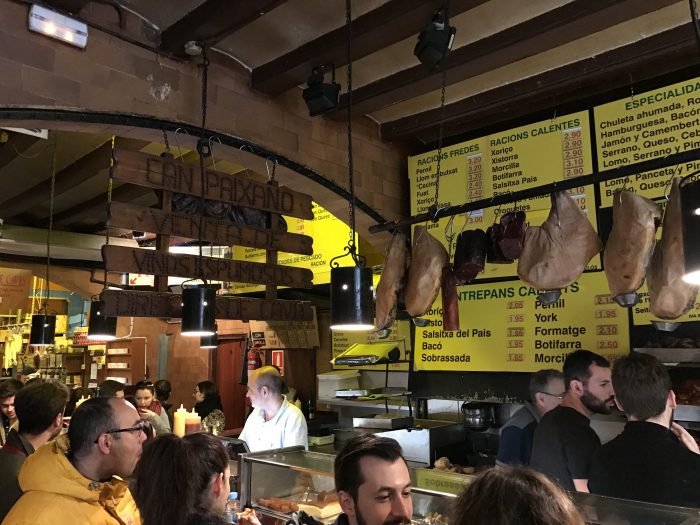 Step inside this narrow bar, and you’ll find locals & tourists snacking on tapas while drinking cava. The prices are low, and it’s crowded, but it’s an experience not to be missed. 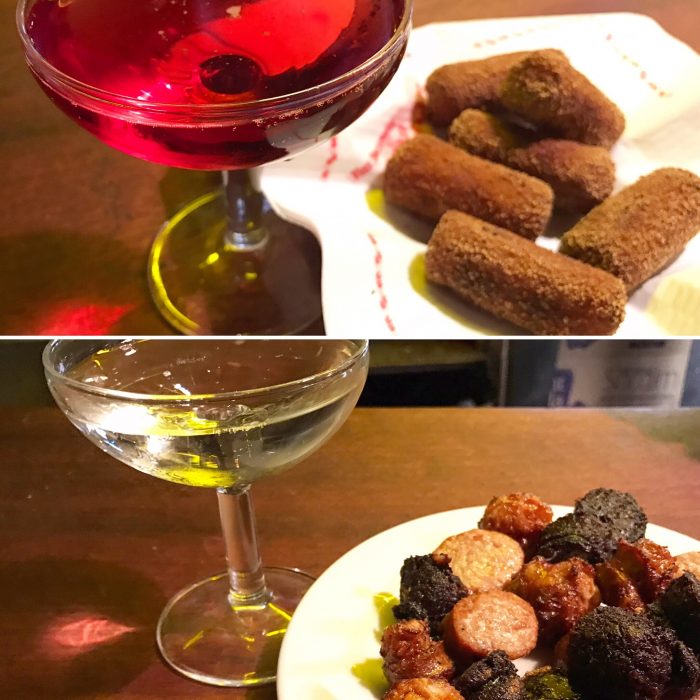 Another must-do for fans of great local food is La Boqueria Market, which is just on the other side of La Rambla from the Gothic Quarter. The market has dozens of stalls serving everything you could possibly want to eat. 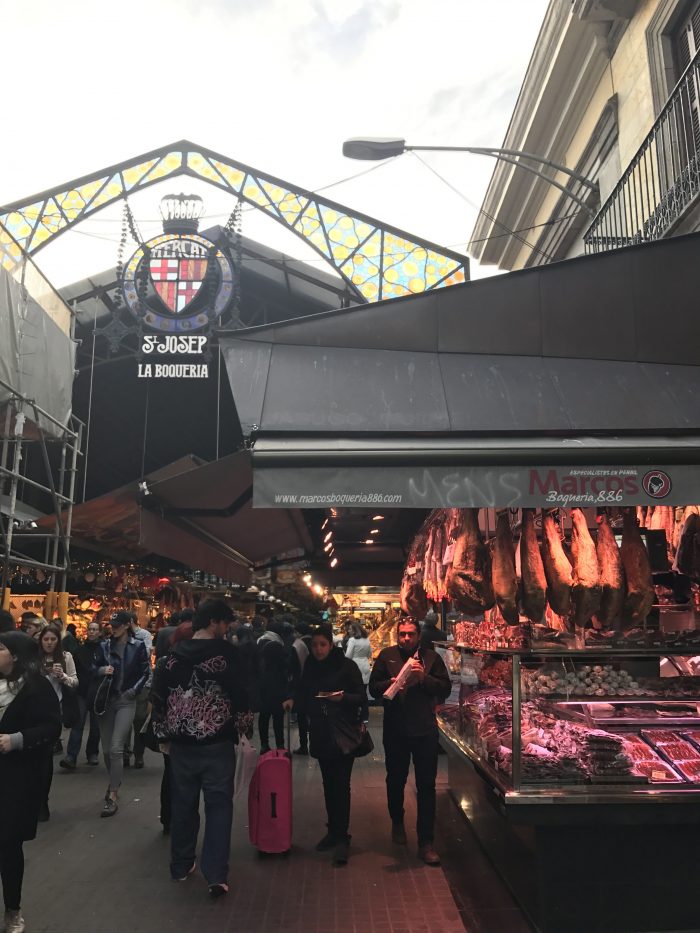 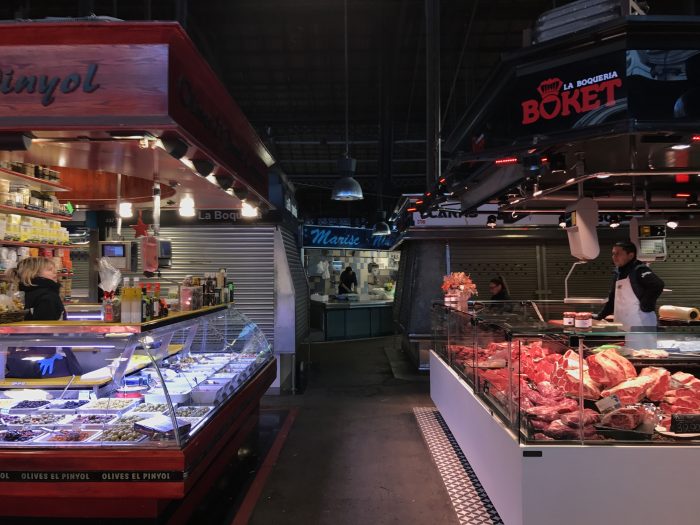 The selection of craft beer in Barcelona is excellent. A couple of the best bars are located in the Gothic Quarter. The latest trends in beer mix with historic architecture in these bars. If you’re thirsty while exploring the area, Kælderkold & Craft Barcelona are two great options. 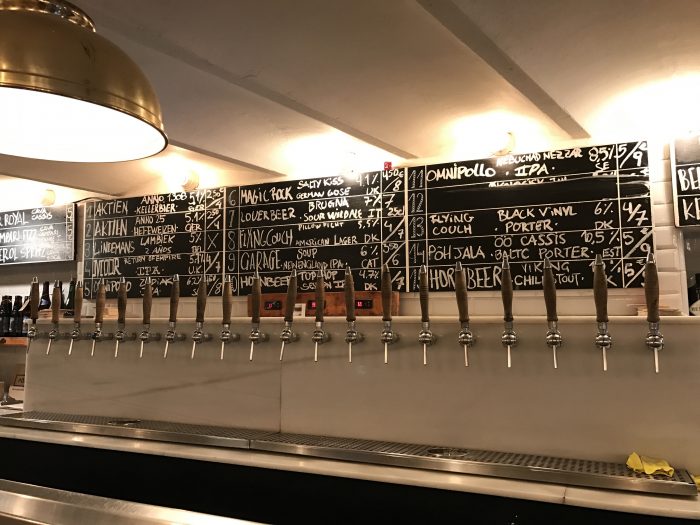 The Gothic Quarter of Barcelona is the area where most visitors spend much of their time. Between all the historical sites, plus the bars & restaurants, it’s easy to see why they do. It can be crowded, but visit during the off-season and you’ll have a better chance to really get to know the heart of Barcelona.