No visit to Barcelona is complete without seeing the works of famed architect Antoni Gaudí. From the lampposts in Plaça Reial to Palau Güell near La Rambla to the expansive Park Güell, Gaudí’s fingerprints are all over Barcelona. His masterpiece is still under construction, over 90 years after his death. This massive church, the Sagrada Familia, is an architectural wonder that can’t be missed when visiting Barcelona. 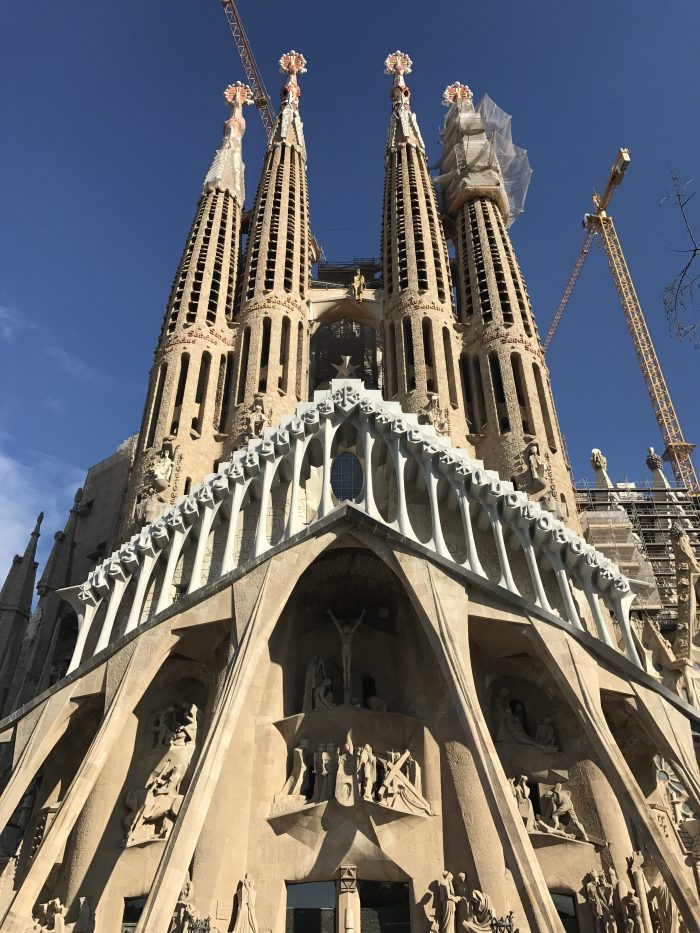 The full name of the Sagrada Familia is Basílica i Temple Expiatori de la Sagrada Família. Gaudí took over construction of the church in 1883 and devoted the rest of his life to the project. When he died in 1926, under 25% of the project was complete. The basilica has continued its sporadic construction in the century since, with interruptions due to the Spanish Civil War & lack of funds. In recent years, the progress has sped up thanks to engineering advancements & consistent funding through visitor entry fees. Many of Gaudí’s original plans were destroyed during the Spanish Civil War. However, the Sagrada Familia has been built as closely as possible to his original vision, incorporating his iconic mix of Gothic & Art Nouveau styles.

It’s easy to get to the Sagrada Familia from central Barcelona. Just take the Metro L2 or L5 lines to Sagrada Familia station. Barcelona has wisely allocated two blocks as parks on either side of the church. These parks make for excellent spots for taking photos of the building. Since it’s so tall, you’ll want to see it both up close and from across the street. The ponds of the park have nice reflections of the basilica above. 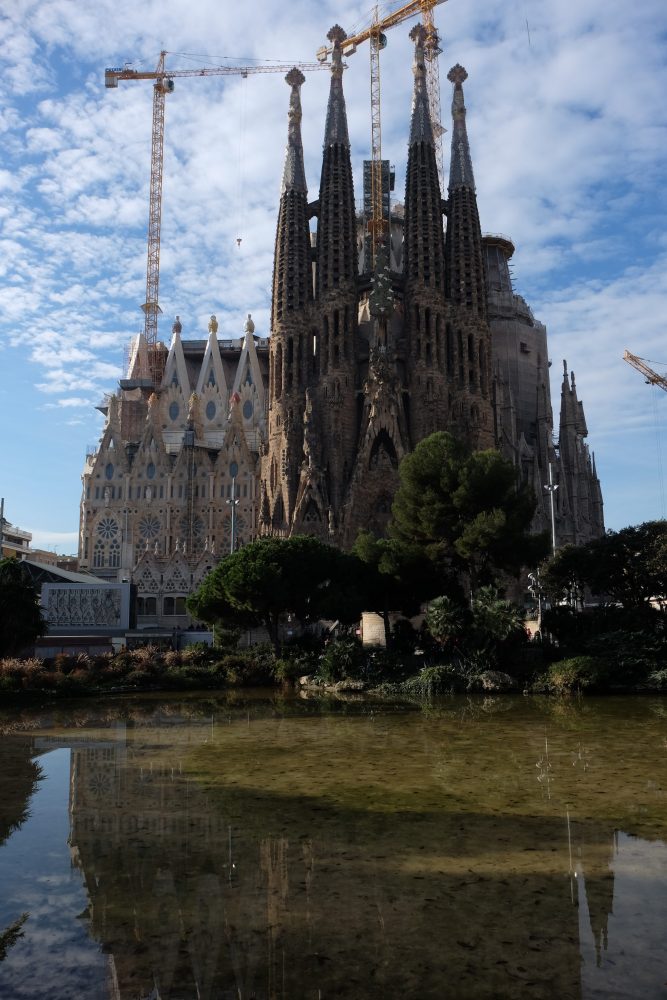 In order to avoid any potential lines, I would recommend buying a ticket ahead of time. In my case I went around 11am on a January Wednesday, so I was able to buy a ticket for immediate entry. Depending on the lines, you may want to buy your ticket first, then wander through the parks if you can’t enter yet.

On my first visit to Barcelona, I’d only walked around the outside of the Sagrada Familia due to lack of time. This time, I opted to do the regular €18 entry. This gives access to the church but only on the ground level. There is a more expensive ticket that also allows you to view the project from high above in the towers. Since La Sagrada Familia is still under construction, I decided to save this tour for a future visit once it’s finished. This is currently projected to happen in 2026, so it gives me something to look forward to.

After passing through the security near the entrance, you’ll find yourself at a plaza where you can gaze up at the details of the entryway. There is so much here that you could easily spend an hour looking at every detail of the façade. Every little bit has meaning. The entire building tells the story of the Bible. At this entrance, there are religious references to the Nativity, but there are also many connections with the natural world. 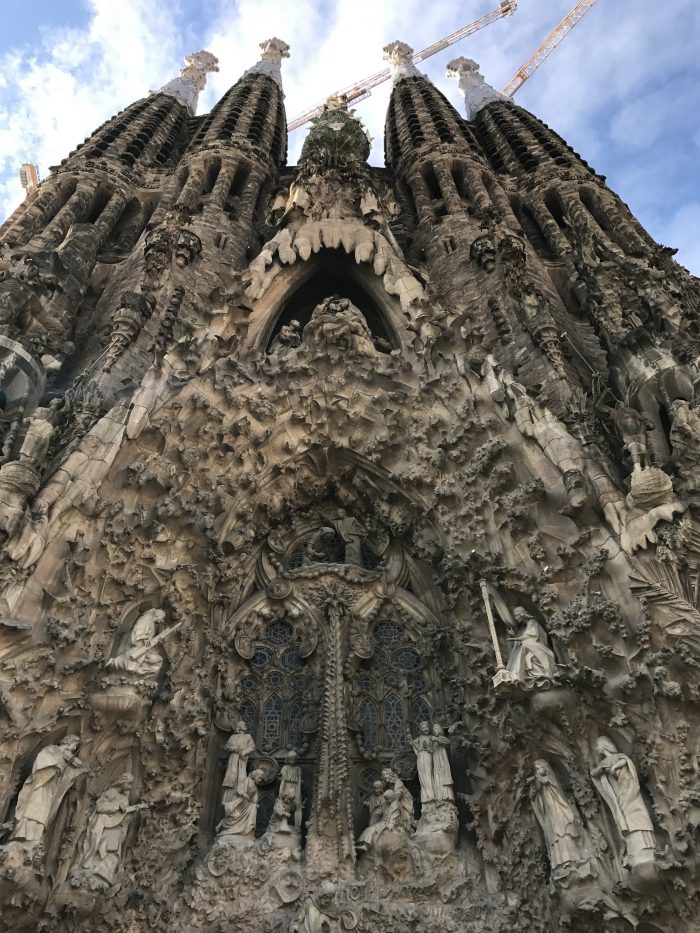 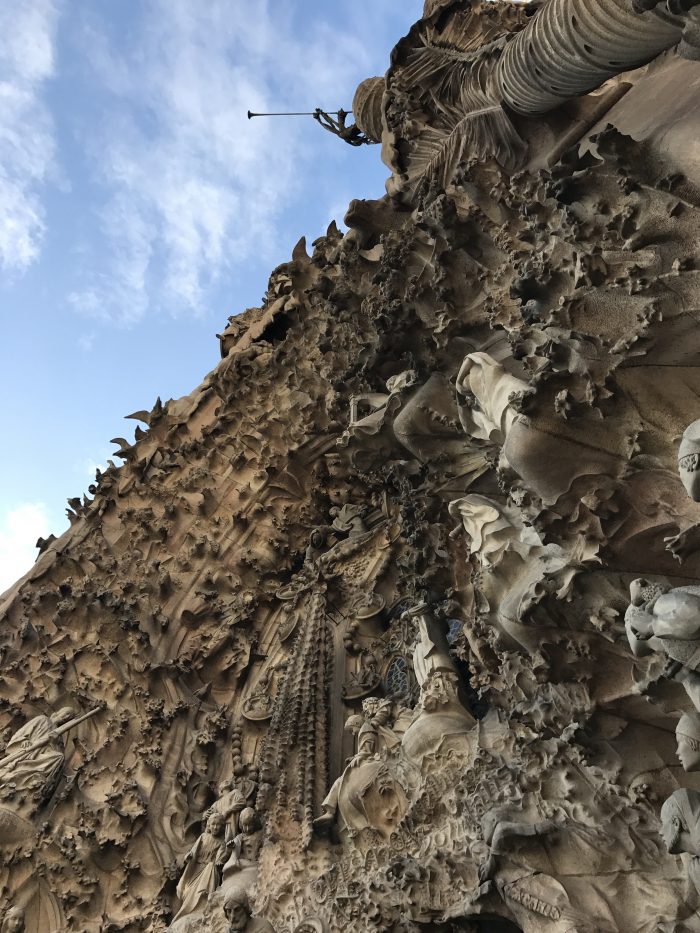 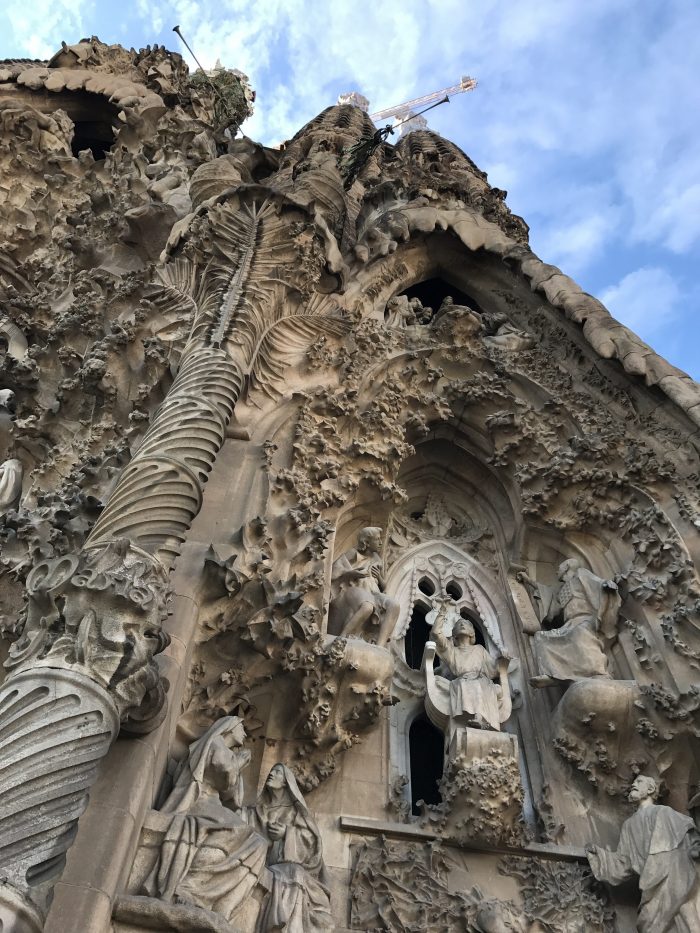 In addition to being deeply religious, Gaudí also loved nature. It’s in this building that he was able to connect the two. Columns with sea turtles flank the entryway. Inside and out, there are more references to nature as well. 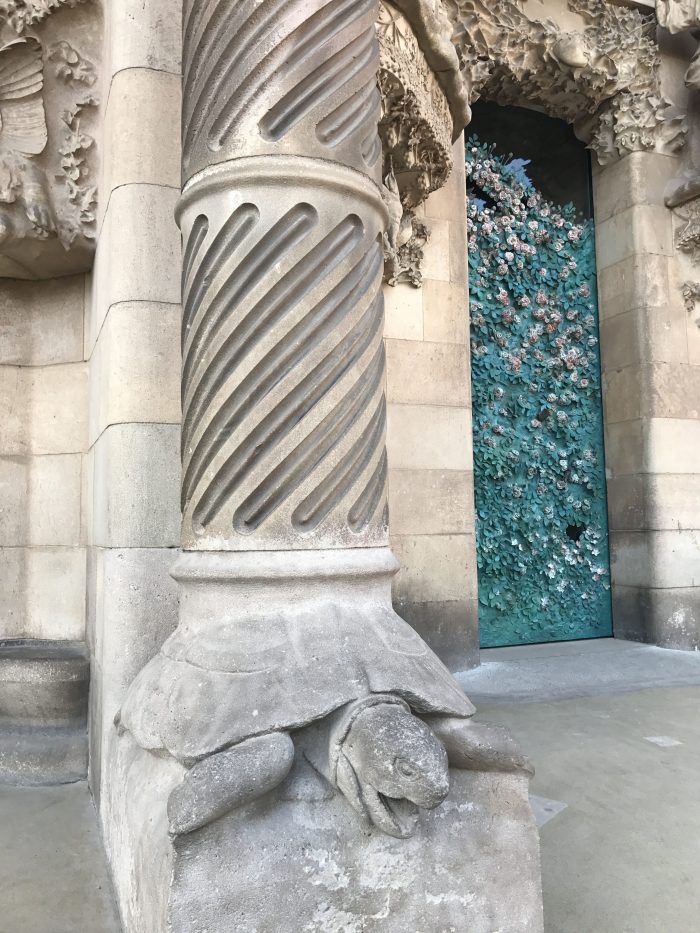 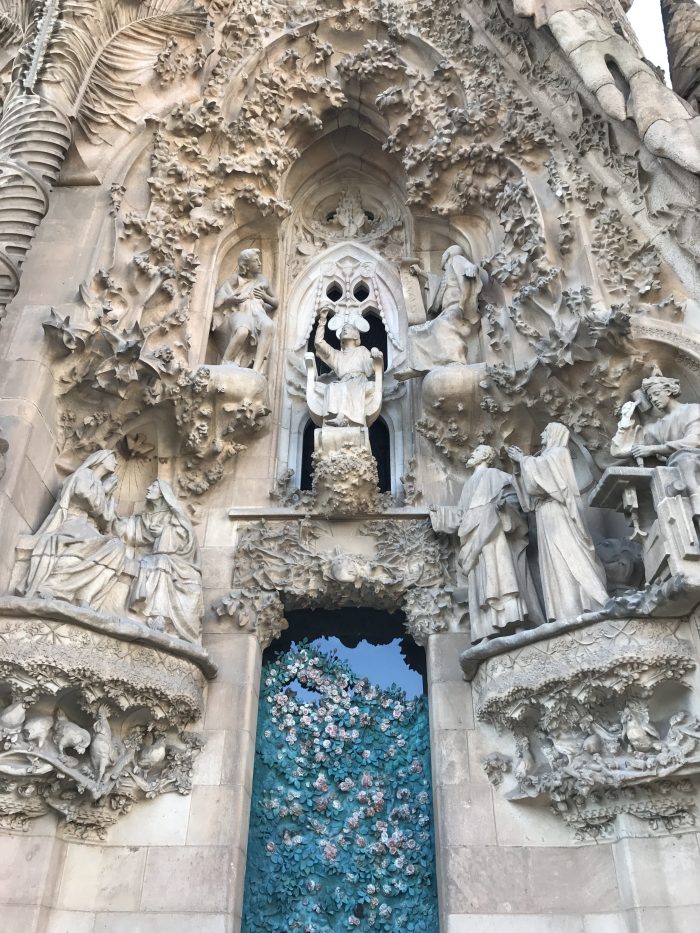 Heading inside Sagrada Familia, there is no set path to follow. It’s impossible to not walk inside and immediately crane your neck up to see the high ceilings above you. 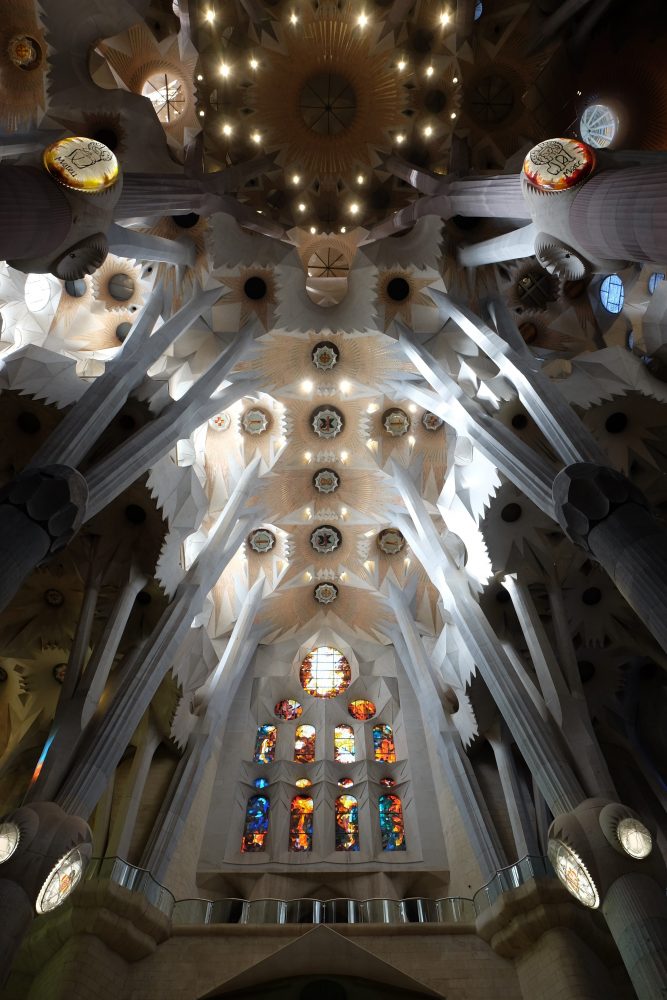 It’s truly remarkable just how open it is inside the Sagrada Familia. Comparatively thin columns hold up this massive building. The structure of the columns mimics trees, including a central Tree of Life. 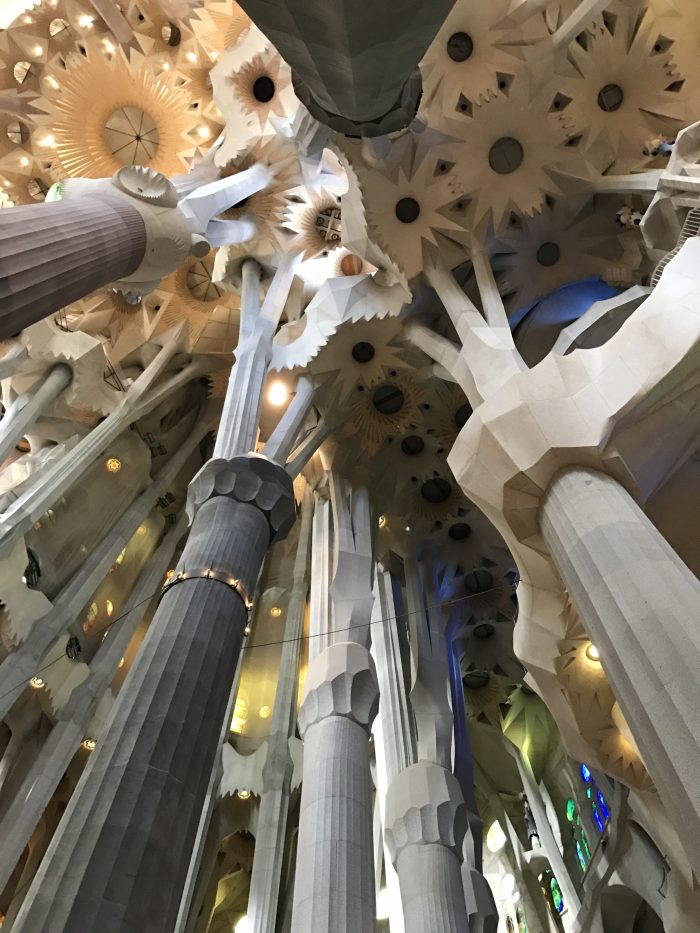 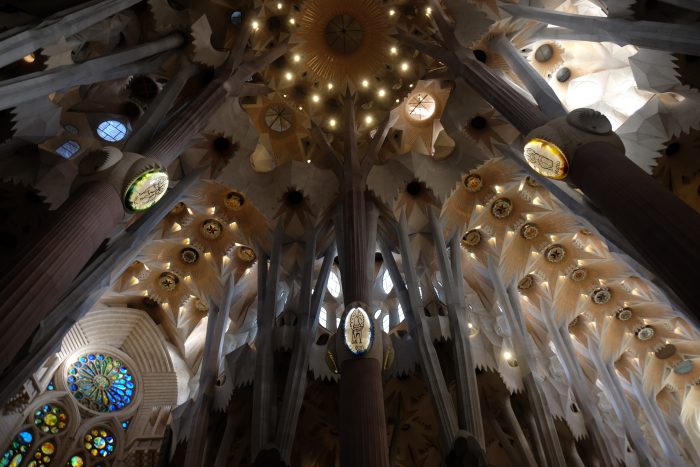 To the right of the entrance, there is a small alcove where a video plays on repeat. The video is called “Gaudí: God’s Architect,” and gives a nice introduction to his life & the building. This piece from “60 Minutes” is not the same video that plays, but it’s similar in theme & goes into even more detail.

The mix of architectural styles means that there’s something for everyone. The fine details of the façade are countered by the simple, cleaner elements of the interior. 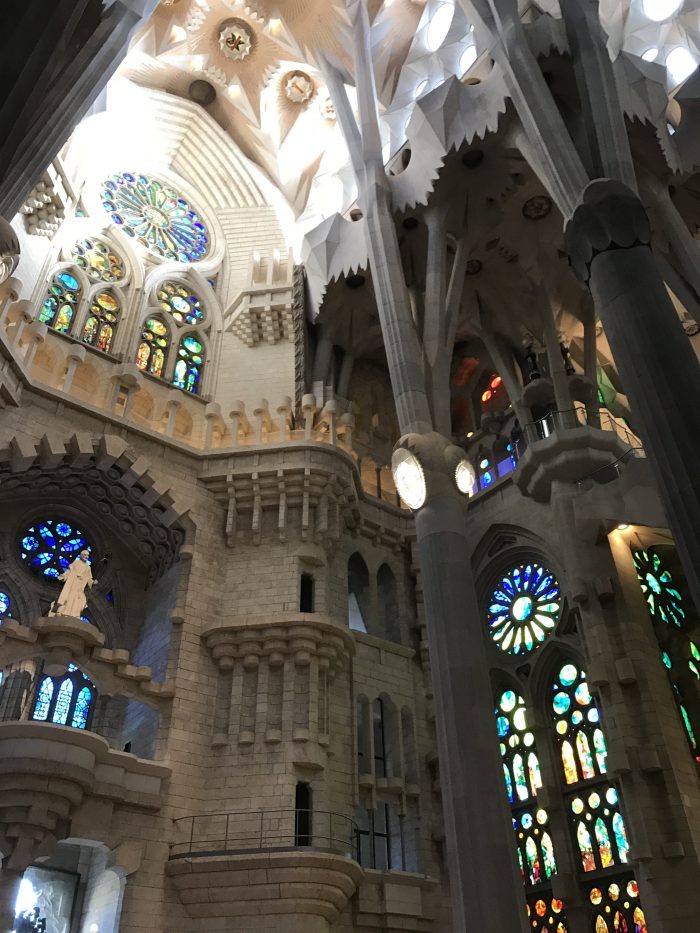 The stained glass windows are both brightly colorful & detailed. The amount of windows allow the Sagrada Familia to be much brighter than you’d expect based on the exterior heft. 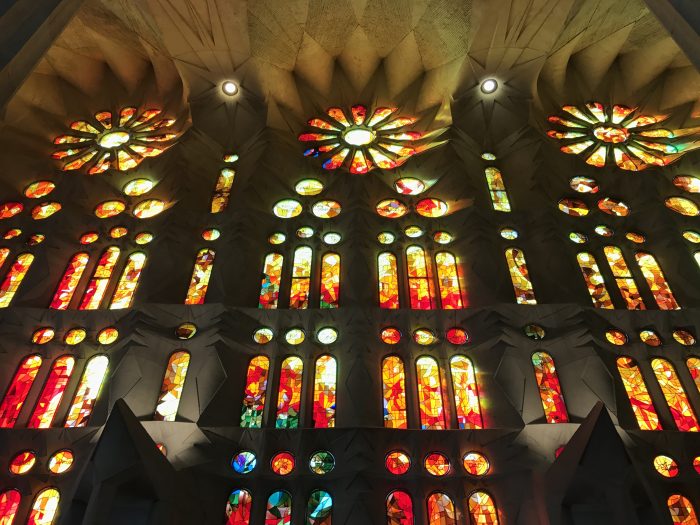 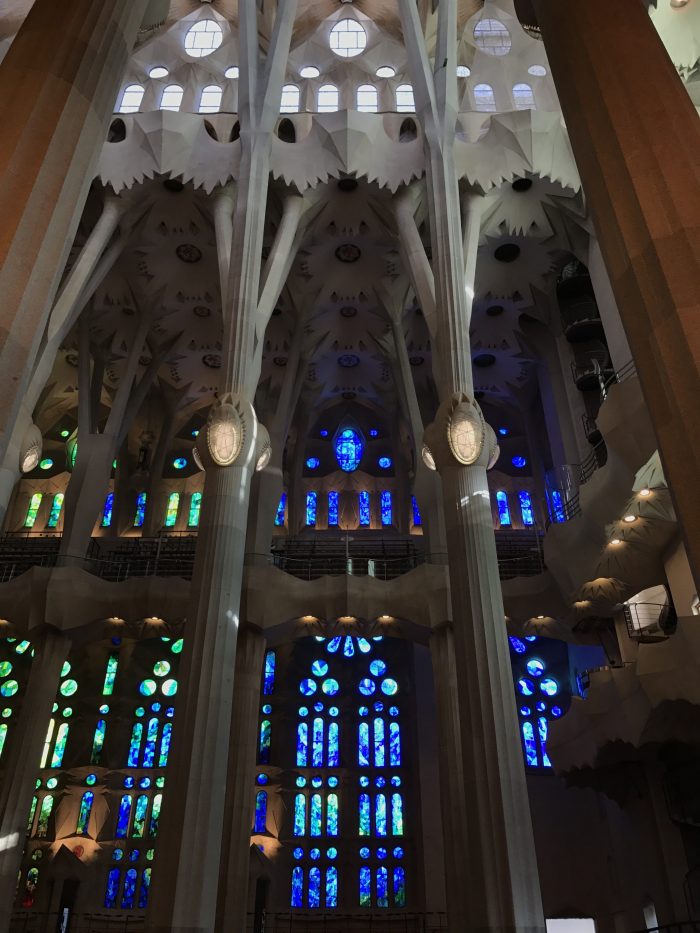 While most of the construction is taking place outside, there is still some work being done on the interior as well. 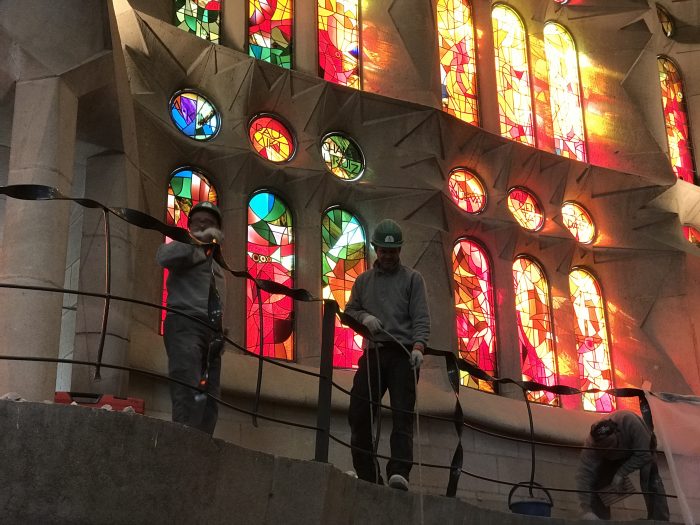 It’s easy to spend hours exploring every element of Gaudí’s masterpiece, especially if you have a camera. It’s truly a breathtaking experience. Around noon, bells chimed & Ave Maria was sung. 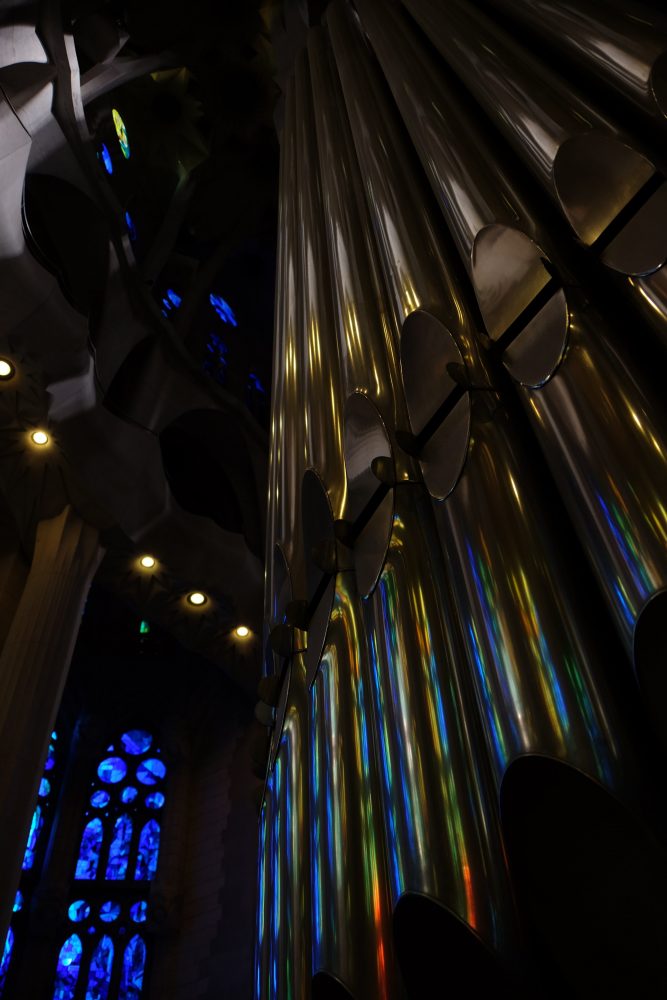 I’m not religious, so those aspects of the Sagrada Familia were not important to me. The purpose of the building could have been to celebrate “Star Wars” for all I care (which would be amazing, but I digress). What’s particularly impressive to anyone, both believers & non-believers of Catholicism, is the ingenuity & craftsmanship that has gone into this spectacular church. From an engineering standpoint, Barcelona’s Sagrada Familia is one of the finest buildings ever constructed by mankind. It’s impossible to not be blown away by everything you see around you. I imagine that if you’re religious, it’s even more moving.

I spent over an hour inside the Sagrada Familia. By the time I went back outside, my neck was sore from looking up at the tall ceilings.

Outside, more details have been carved into the building’s façade. This exterior portion is newer, both in construction & architectural influence. 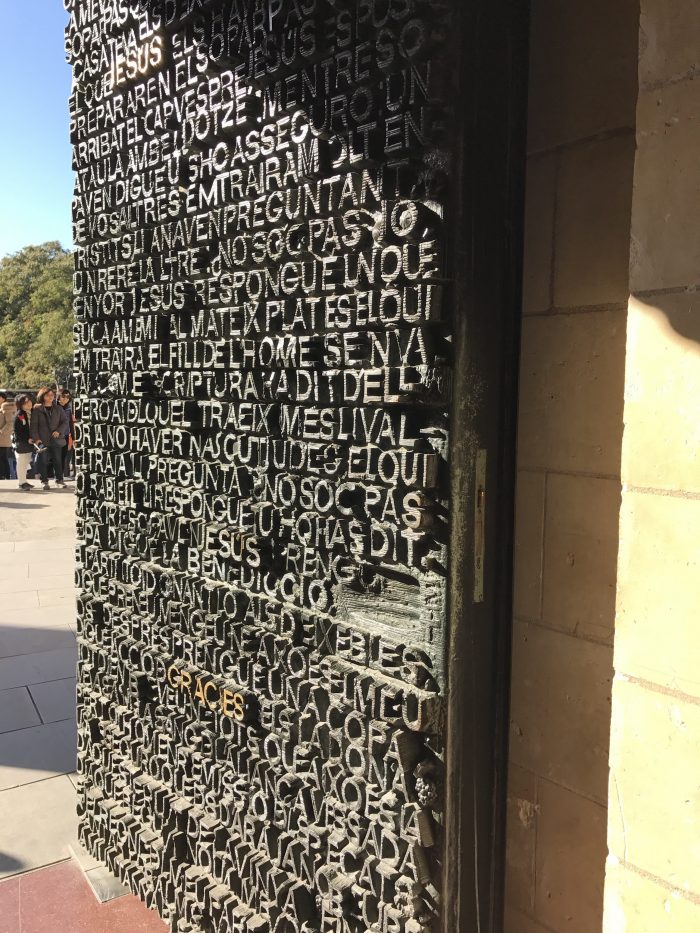 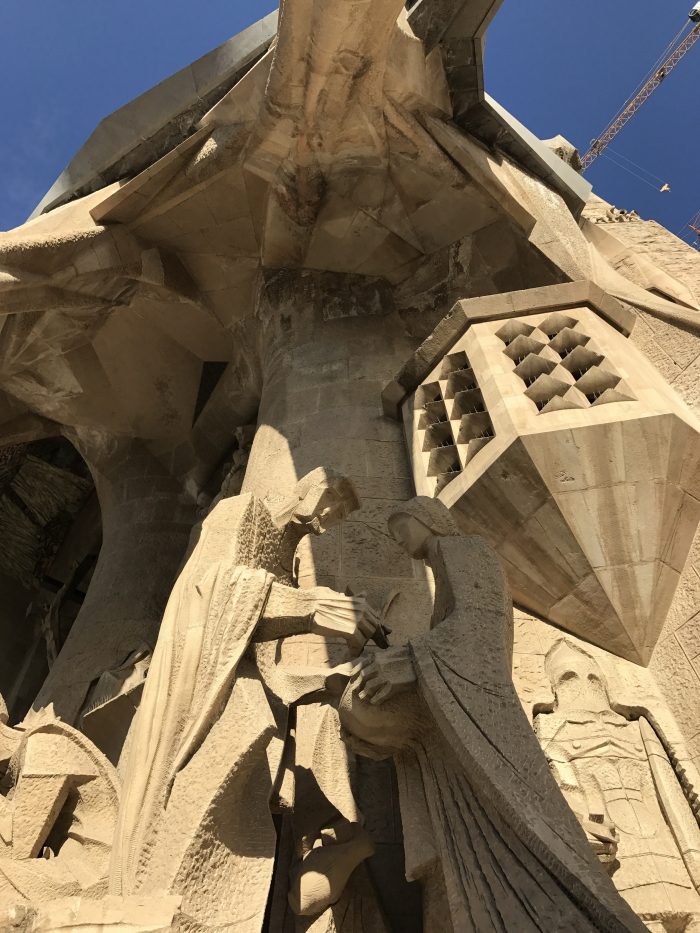 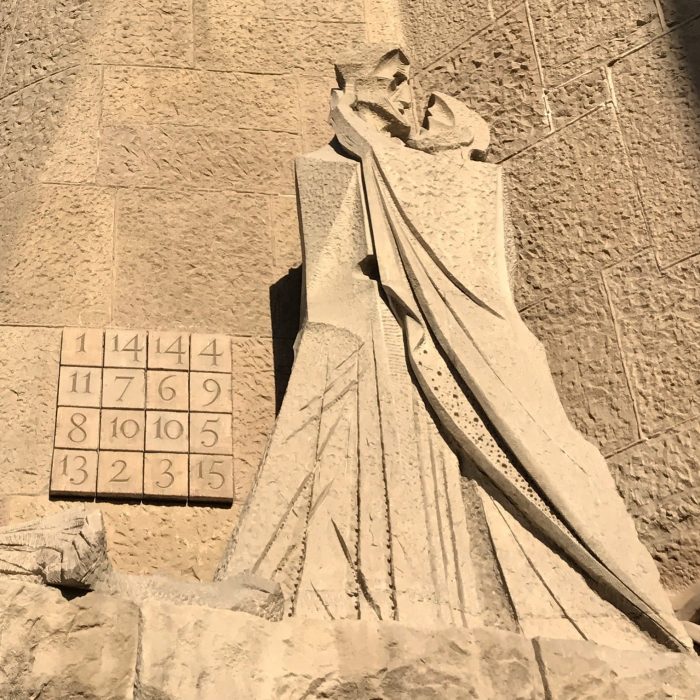 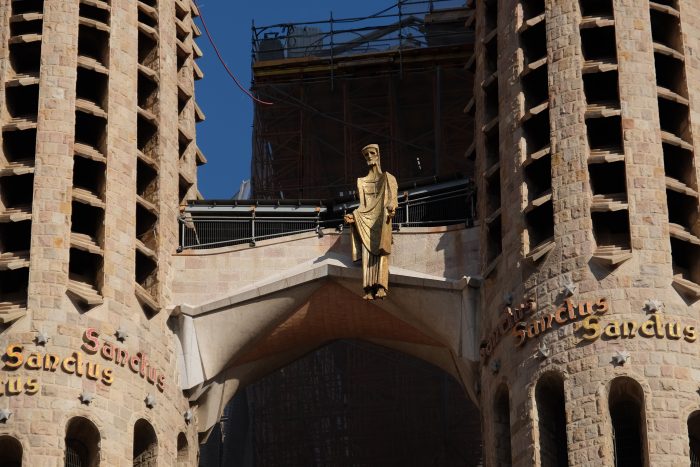 Above you, towering cranes swing as construction continues. 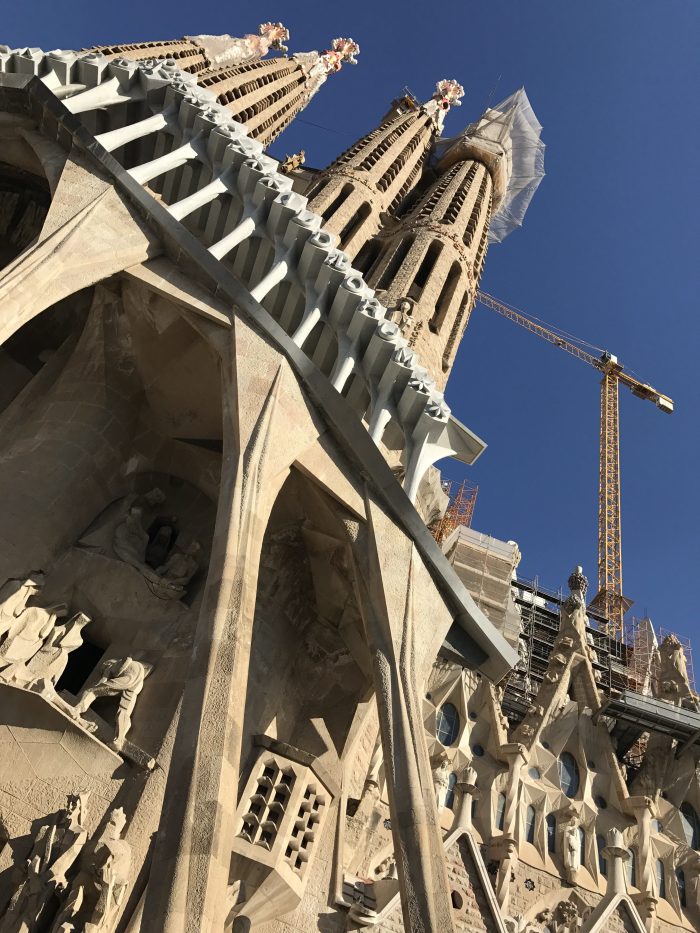 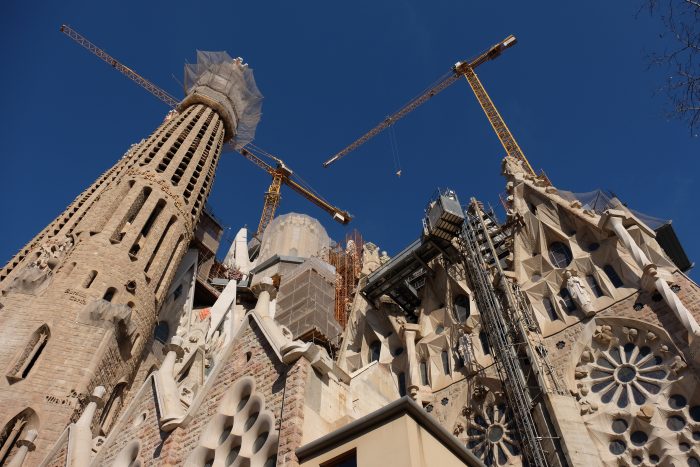 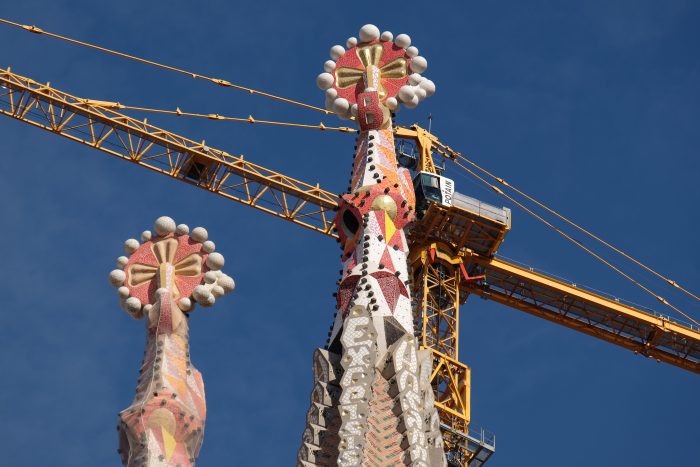 In one of the corners of the churchyard, there is a model of what the completed Sagrada Familia will look like. It’s here that you realize that even though the interior of the basilica is now mostly complete, there is still a lot of work to be done outside. This work includes all of the tallest towers. In fact, the Sagrada Familia is currently only about half as tall as it’s going to be when it’s finished! It will reach nearly as high as the hills of Barcelona when it’s complete. 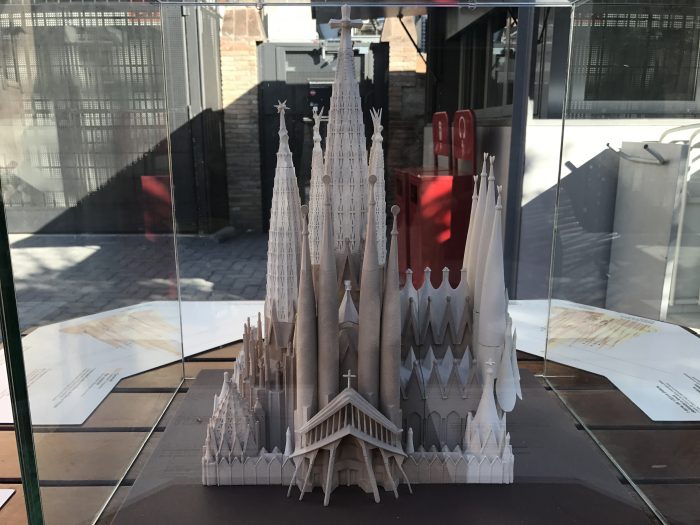 Back outside the grounds, I visited the second park on the other side of the church to take in a final view in the bright winter sun. There are kiosks, musicians, and artists in the park. In total, I spent over 2 hours both inside & outside the church. 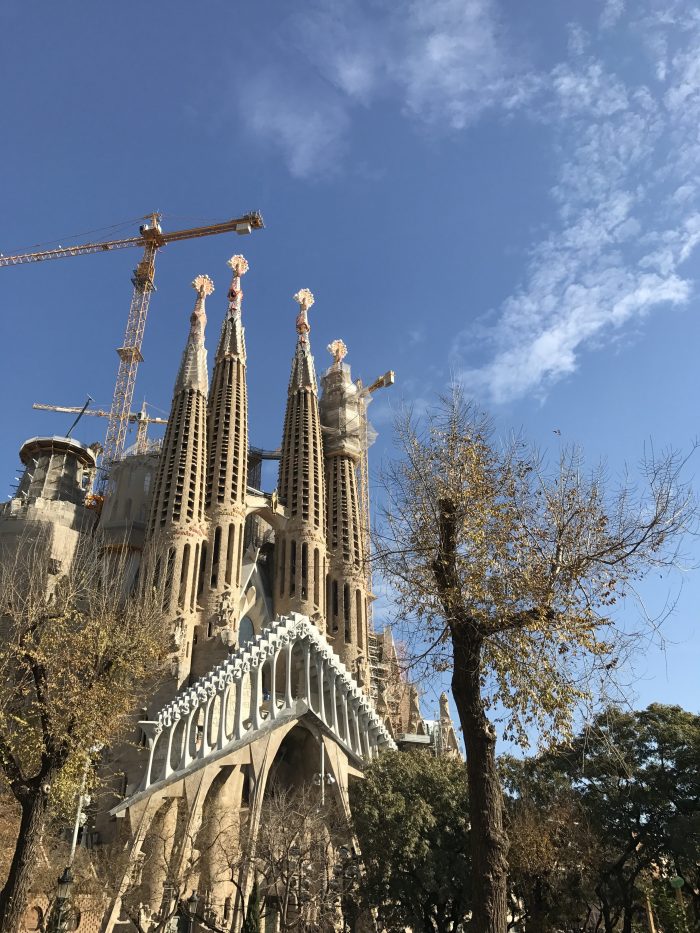 Despite being incomplete the Sagrada Familia in Barcelona is modern wonder. Antoni Gaudí’s vision is still being fully realized, but what has been constructed so far is truly magnificent. If you have any interest in architecture whatsoever, if you’re visiting Barcelona, the Sagrada Familia can’t be missed.