As time goes on, trendy neighborhoods evolve. What’s cool one year might not be as popular the next, once prices go up & artists, musicians, and small business owners start to get priced out. In New York City, Bushwick has supplanted Williamsburg as the hottest hipster area. The neighborhood is especially known for having some of the best street art in New York City. That alone makes Bushwick worth trekking out to, but plenty of restaurants, bars, and coffee shops have also popped up in the area. And yes, plenty of craft beer too. Here’s where to find the best craft beer in Bushwick, including breweries, beer bars, and bottle shops.

The best breweries in Bushwick

Bushwick was once home to one of the largest collections of breweries in the United States. However, thanks to Prohibition & other factors, the breweries all closed, and for over 40 years, Bushwick was quiet. Kings County Brewers Collective has changed that, bringing brewing back to a neighborhood once called “Brewer’s Row”. The bar is a big, airy space, with large windows looking out onto Troutman Street.

Kings County Brewers Collective was opened in 2016 by three friends: Tony Bellis, Pete Lengyel, & Zack Kinney. The friendship of the three has extended even further beyond the collective, as they are frequent collaborators both with other brewers, local businesses, and artists. 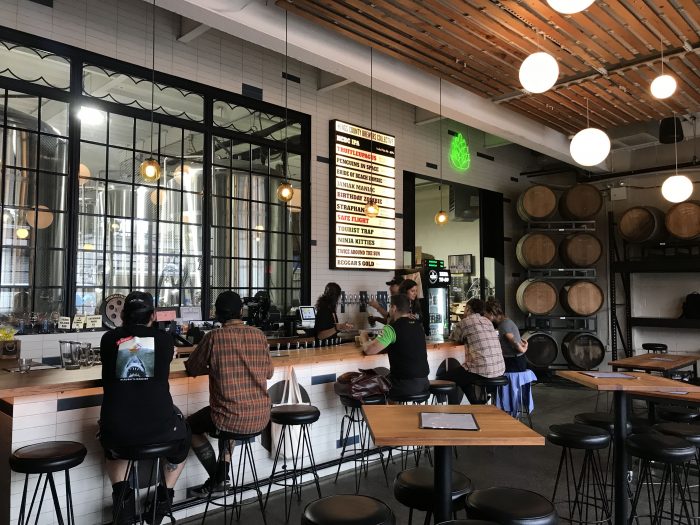 One of their 12 taps is going to be dedicated as a “Local Talent Tap.” This tap will feature one-off, small batch collaboration beers with friends & neighbors. A portion of the profits from these beers will also go to help local non-profits.

There are several more great breweries in Ridgewood, just across the Bushwick border near Halsey Street.

The Sampler is where Bushwick’s street art scene meets craft beer. Like many other buildings in the area, the front of the bar is covered in art.

Inside, you’ll find even more art. When I visited, a new art show was being installed. It’s a cozy spot, so I kept apologizing for being in the way.

The Sampler has 20 rotating taps, plus a selection of hundreds of bottles & cans. There’s plenty of local beer, along with a selection of hard-to-find beers from elsewhere. It’s a cool bar, even on a quiet weekday afternoon.

The Brooklyn Beer Garden is a seasonal outdoor space filled with the best of Bushwick: craft beer and street art.

There are canned beers from local breweries, including KCBC.

Buy a can and stroll around the space, which is covered in street art curated by artists & friends Gabriele & Tyagi. There is a rotating gallery, with some pieces available for sale.

Nook is a popular Bushwick coffee shop that also has a nice 10 tap craft beer selection.

It serves as a community hub, hosting live jazz, trivia, and open mic nights. It’s also a popular place for working or “working,” depending on your level of motivation.

Pine Box Rock Shop has been a neighborhood favorite since 2010. The bar is located in a former casket factory, which reminded me of Pine Box in Seattle, which is in a former funeral home. It may technically be in East Williamsburg, but it’s close enough to Bushwick & worth the detour.

The bar top is one of the coolest I’ve ever seen. While it’s made of pine (of course), it’s also covered in concert tickets from New York City shows of the past, collected & contributed to the bar by friends of owners Heather & Jeff Rush. Reminiscing about these concerts makes for a great nostalgia trip & conversation starter.

Pine Box Rock Shop has a nice selection of 16 taps, plus a couple of tap wines and cider, as well as cocktails.

Oh, and it’s also vegan but non-vegans, don’t let that scare you off at all. There’s still a deer hunting arcade game in case you feel the urge to kill animals while drinking a pint.

High Low Beverage Company is another Bushwick spot that combines craft beer & coffee. What this means is that you can experience heaven: a craft beer with a nice pastry such as their Vietnamese coffee cinnamon roll. They also serve banh mi.

Left Hand Path has a selection of local craft beer in addition to a full bar.

Check out some of the street art in Bushwick below:

Inevitably, some other neighborhood will replace Bushwick as the cool place to be, but for the foreseeable future, it’s a neighborhood on the rise as more new bars & restaurants open up. The street art alone makes Bushwick worth visiting, but be sure to take a break from exploring to have some local beer.

If you’ve spotted other great places for craft beer in Bushwick, let me know in the comments!

If you’re looking for a place to stay near Bushwick, check out these New York City hotels.