In the 19th & 20th centuries, there was a rush to exploit the natural resources of the western United States. Thousands of people moved to newly built towns to try their hand at mining. One of these Gold Rush boomtowns was Rhyolite, Nevada, which grew out of nothing when gold was discovered in 1904, became a thriving town with thousands of residents by 1908, and then was a ghost town by 1920. Today, you can take a detour out of Death Valley to see what’s left of the Rhyolite ghost town, including some impressive ruins & an open air art museum.

The history of Rhyolite, Nevada

In 1904, prospectors Shorty Harris & Ed Cross discovered gold in a remote area of Nevada. They would call their mine “Bullfrog” since the rocks they found were green with gold flecks like the back of a bullfrog. This bullfrog name would become common in the area, with the mountain itself known as Bullfrog Mountain to this day.

With gold having been located, the rush was on. As more and more mining camps were constructed in the area, the town of Rhyolite was quickly formed in January 1905 near the most promising mine. What started with just two people became a gathering of 1,200 in just two weeks, then 2,500 by June.

It wasn’t just miners. Everything a town needs to support life also quickly sprang up in Rhyolite, including some 50 saloons, plus gambling halls, brothels, hotels, restaurants, schools, and more.

Gold means the potential for massive gains, so investors poured money into Rhyolite in an effort to make as much money as they could. Infrastructure such as railroads, electricity, and running water all quickly found their way to Rhyolite.

By 1907, about 4,000 people lived in this area where nothing had been just a couple of years prior. No longer just a camp, full brick buildings lined the streets, which had concrete sidewalks.

However, as quickly as it was built, Rhyolite would also see its downfall. The 1906 San Francisco earthquake & the 1907 financial panic restricted investment. The quality of the gold at the Rhyolite mines was poorer than the mining companies thought, and by 1909 no new deposits were being discovered. Mines closed, and nearly everyone moved on. There were only 675 residents according to the 1910 census. By this point, all of the fancy banks had closed. Ten years later in 1920, just 14 stragglers still remained in Rhyolite.

Today, it’s difficult to picture Rhyolite, Nevada as a place that once was home to thousands of people. In an area with little to build with, construction materials were taken to rebuild elsewhere in the area, as everyone moved on to the newest rush.

However, there are glimpses of that past in the ruins that have persisted. Some of these buildings are far larger than anything you’d expect in such a desolate place. Most of the town’s land is owned and operated by the United States Department of the Interior Bureau of Land Management. The area has also been a filming location throughout the years. 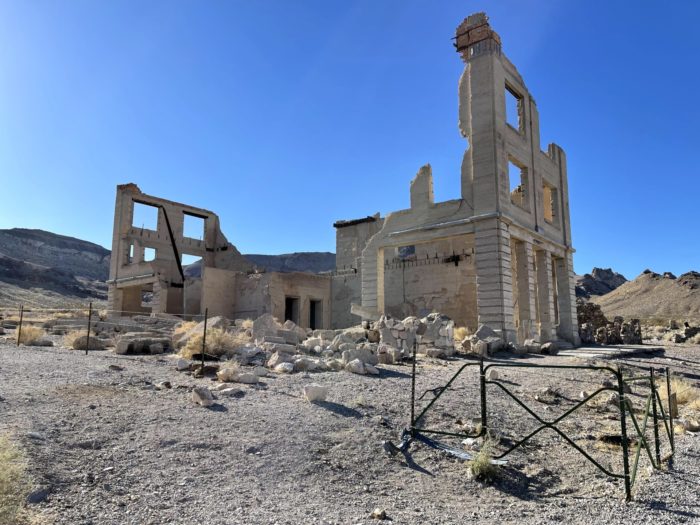 Rhyolite is simultaneously off-the-beaten-path & easy to get to. While this part of the country may not get a ton of visitors (and most of those who do travel here go straight to Death Valley), the town is situated just off Highway 374, which runs across the Nevada-California border through Death Valley National Park. It’s few miles outside of Beatty, Nevada, another former boomtown along U.S. 95 (stop off for some BBQ & craft beer!). The entrance road is paved, though some turnoffs do lead to well-maintained gravel or dirt. If you’re coming from Death Valley, Rhyolite is about 30 miles northwest of Stovepipe Wells.

There’s no entrance fee to Rhyolite. The desert skies, ruins, & art make it a popular place for Instagram photo shoots (and long before that, the music video for Alanis Morissette’s “You Oughta Know”. As you might expect from a ghost town, there are no services, so be prepared for the harsh desert environment. Bring plenty of water & sun protection, & watch out for rattlesnakes. 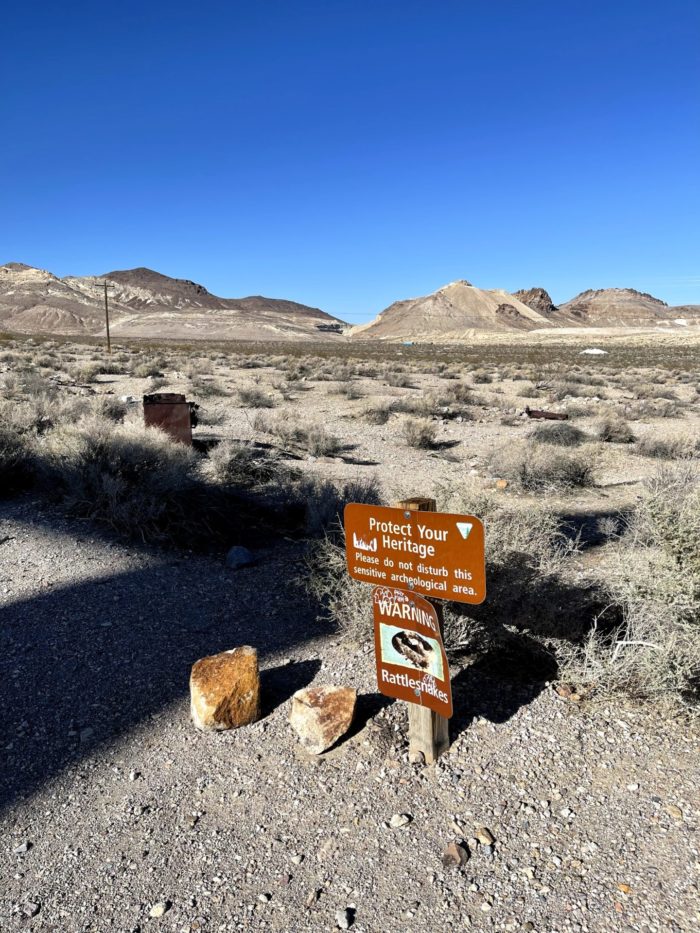 The most unique section of the ghost town ruins of Rhyolite is Tom Kelly’s Bottle House, a spectacularly preserved & restored example of Gold Rush ingenuity. It was a modern “green” home using upcycled materials, long before any of those concepts became popular. 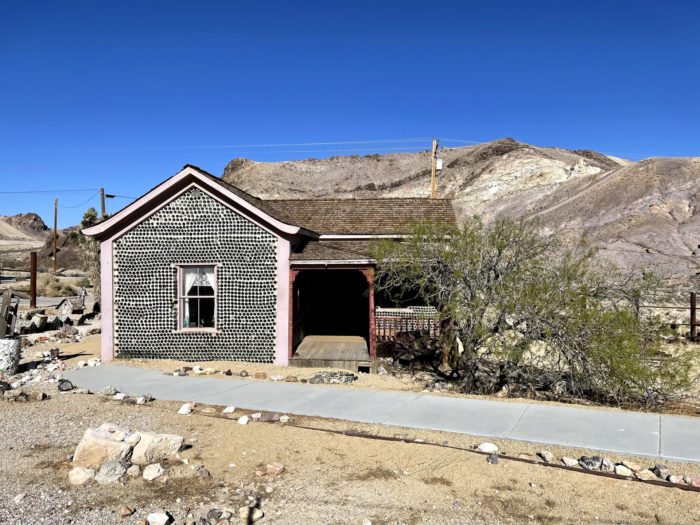 Lacking sufficient lumber, a man named Tom Kelly built a house out of bottles, using adobe to fill in the spaces between the glass. Kelly accumulated some 50,000 bottles for the project, most of which had previously held beer. The presence of Rhyolite’s estimated 50 saloons aided this task. 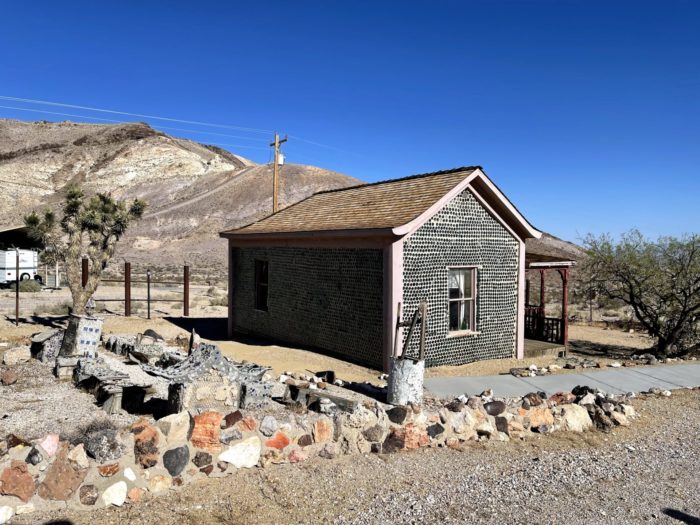 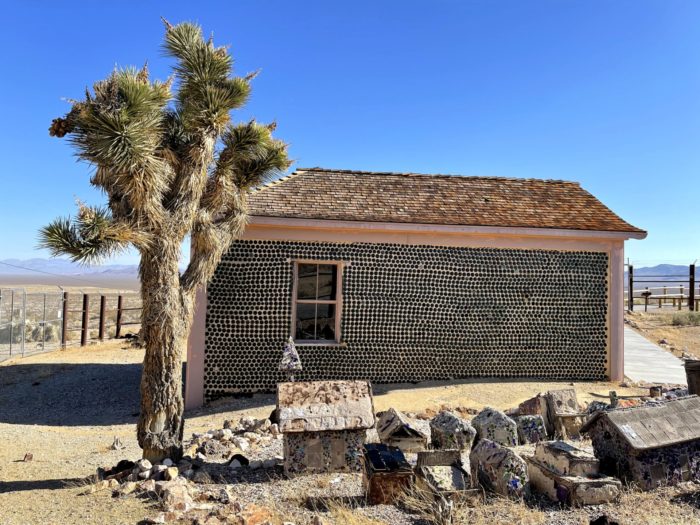 In 1906, Tom Kelly held a raffle for the house, which was then inhabited for a while by the Bennet family, but they left along with nearly everyone else by 1914. Paramount Pictures purchased the property in 1925 & restored it for use in movies. It later became a museum, and now has been repaired over the years to its present state, fenced off for protection. 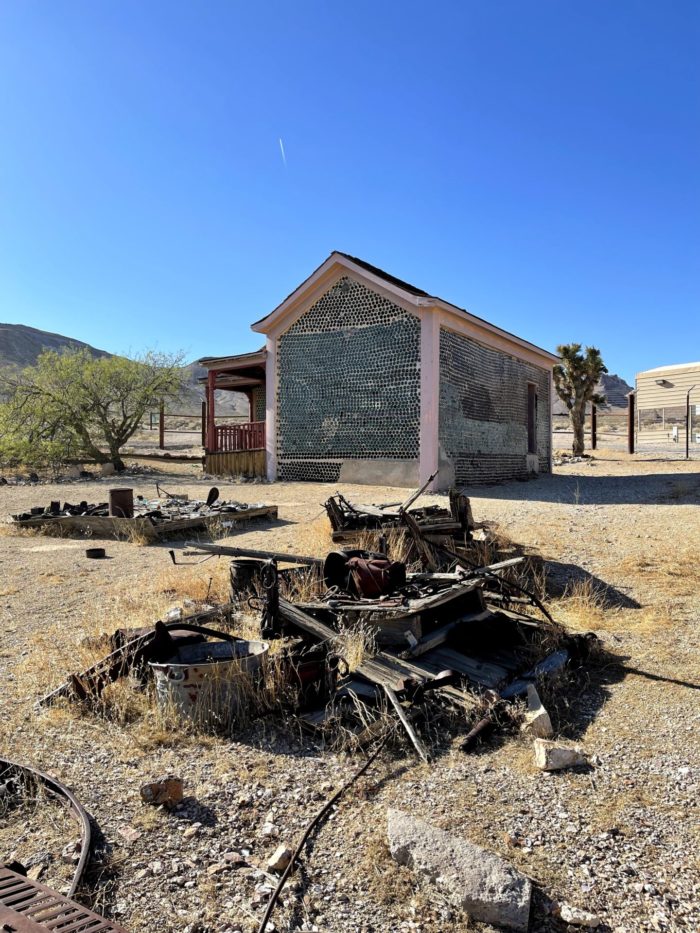 The ruins of several other buildings can also be found today, giving some small sense of what Rhyolite looked for that brief period that it was a thriving town. A place like this shouldn’t have multi-story buildings, yet the skeletons of a few have survived. 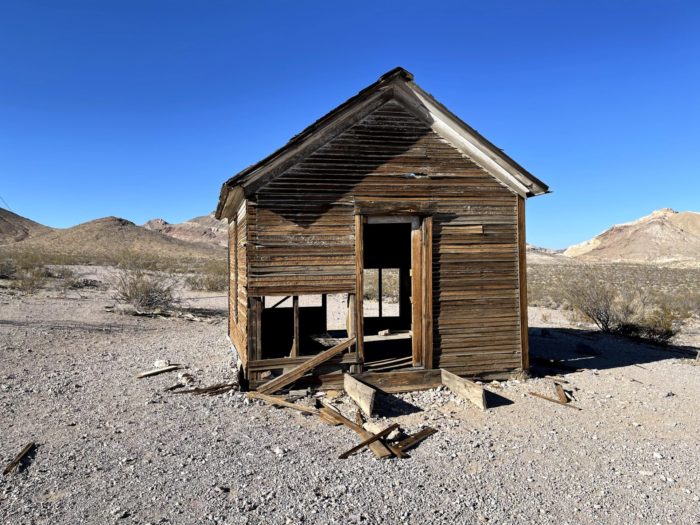 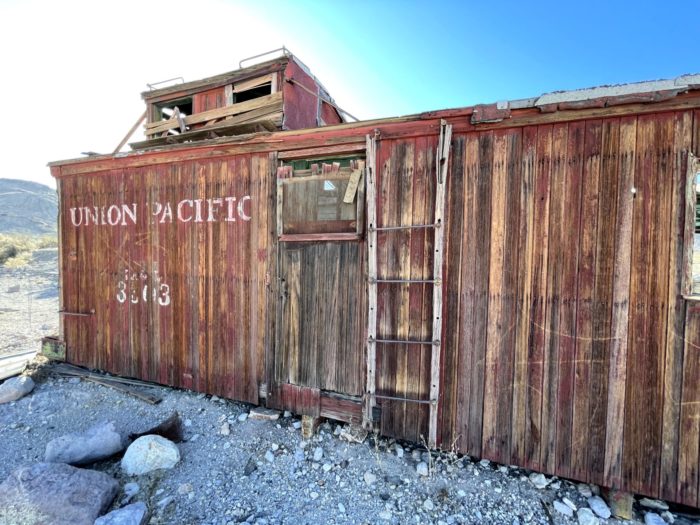 This school opened in 1909, but served few students because most people had left town by then. 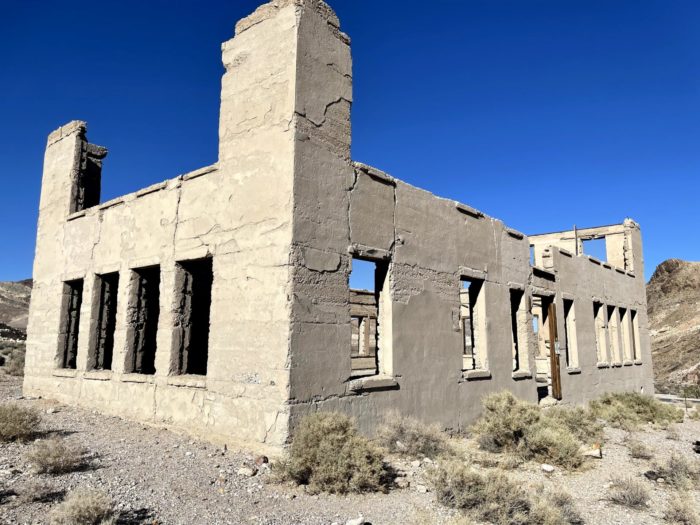 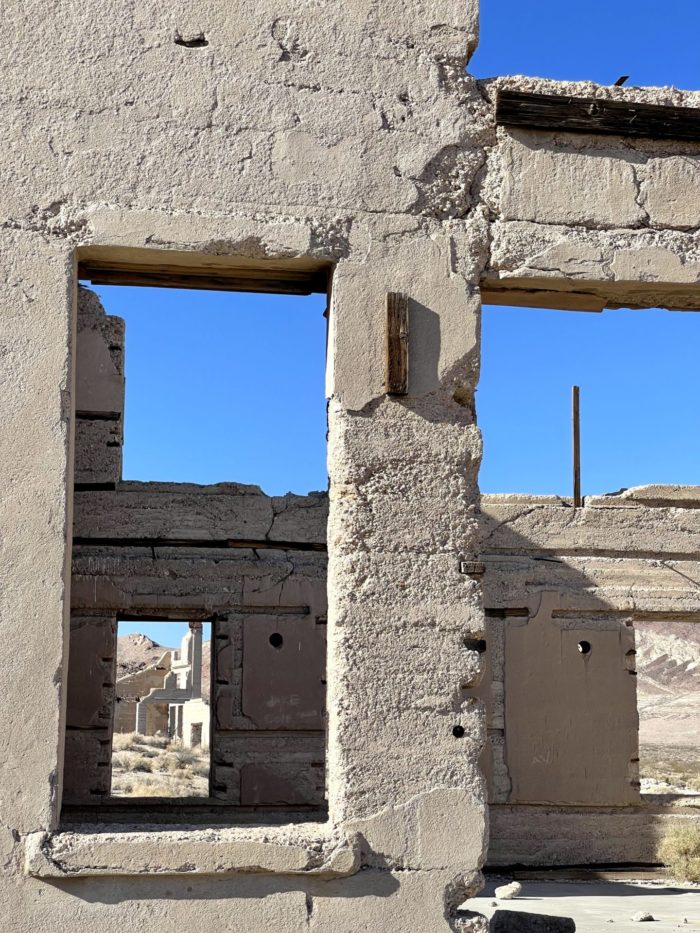 Built in 1907, it housed a bank and other businesses. With electric lights & plumbing, this was once a luxury building. 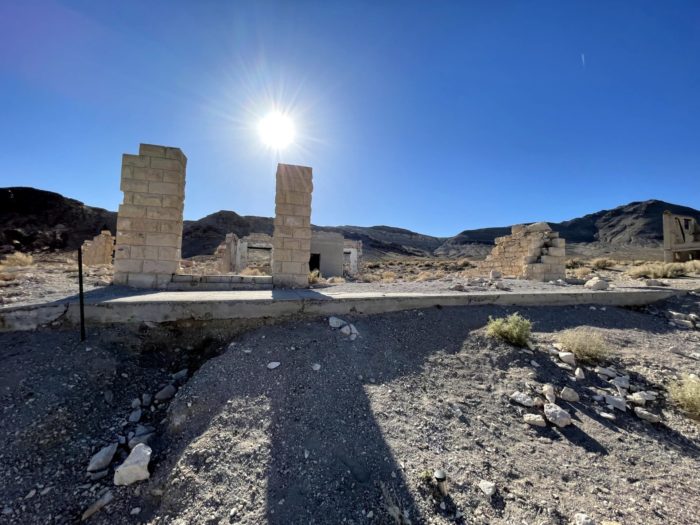 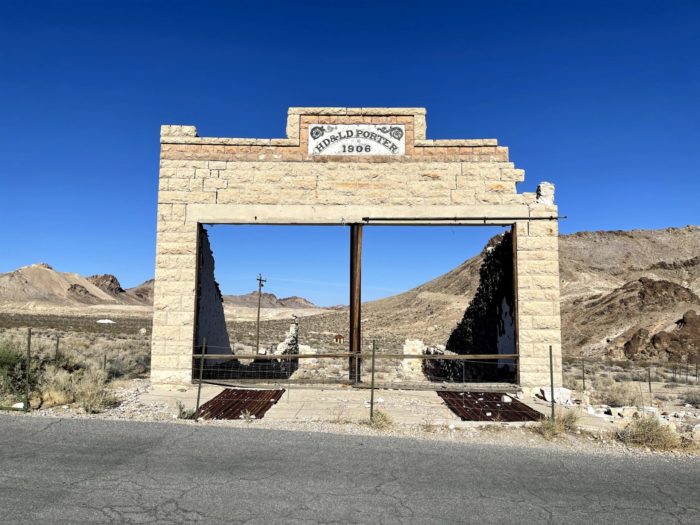 With electric lights, steam heating, and marble floors, this building cost $90,000 to build. It opened in 1908, just in time for mining production to begin its rapid decline. 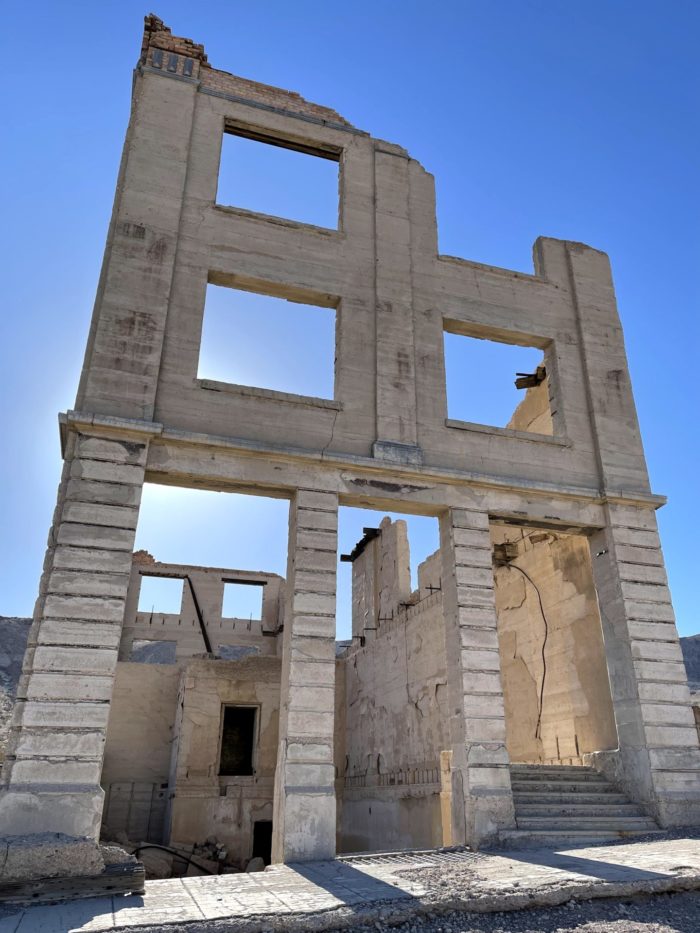 At one point, there were three railroads serving Rhyolite. This depot opened in 1909, making it a convenient way for everyone to quickly leave town. 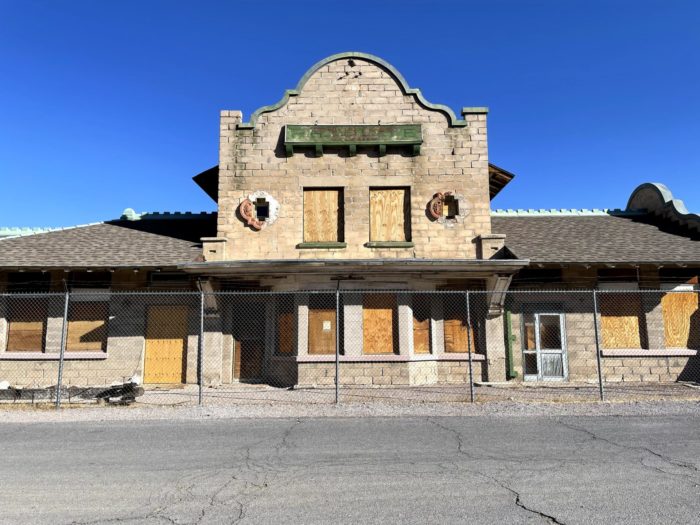 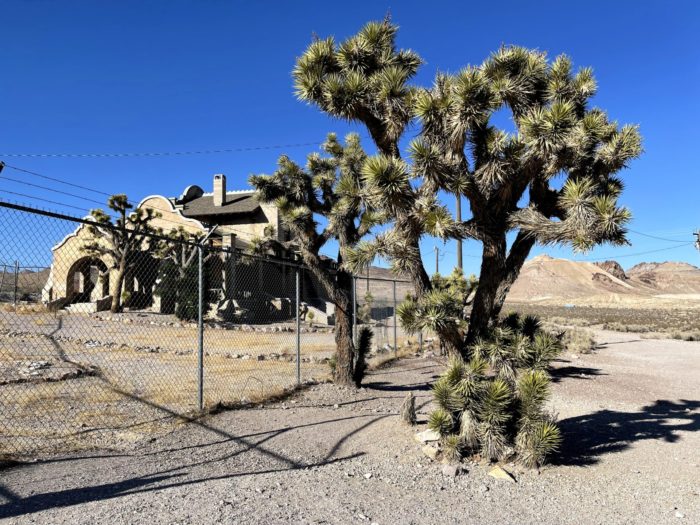 Just south of the Rhyolite ghost town is the Goldwell Open Art Museum. The property is home to a variety of outdoor art installations.

This couch (Sofie Siegmann’s “Sit Here!”) was reminiscent of the tiled art I saw at Fusterlandia in Cuba (or more famously, Gaudí). 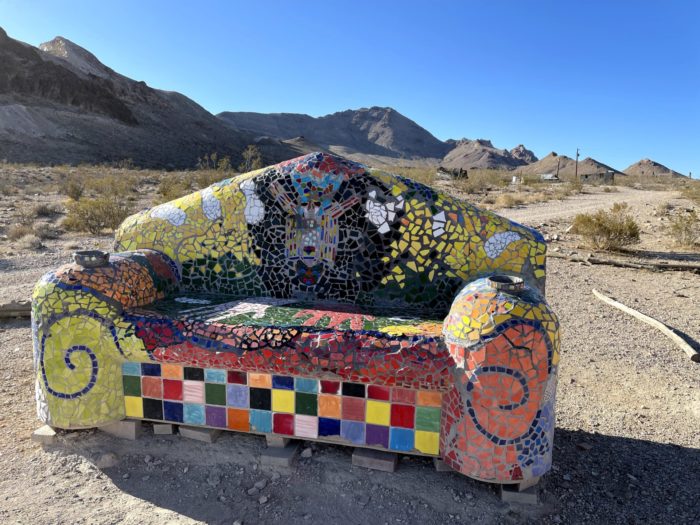 Another highlight is “The Last Supper, by Albert Szukalski, the Belgian artist who first started making art here in the Rhyolite desert. 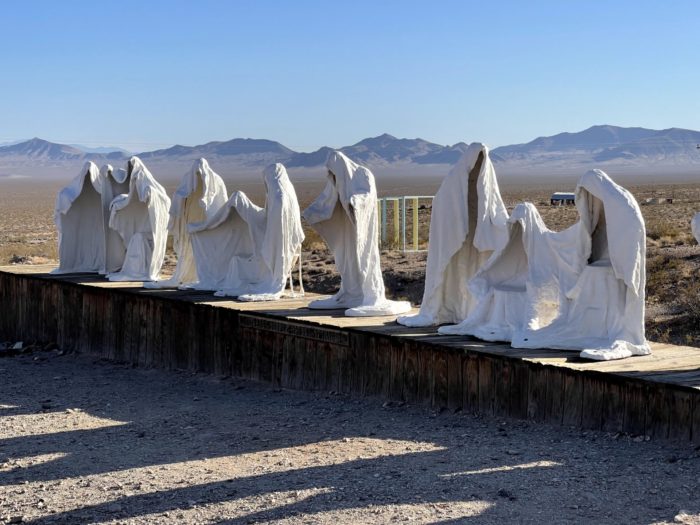 His “Ghost Rider” is also part of the museum. 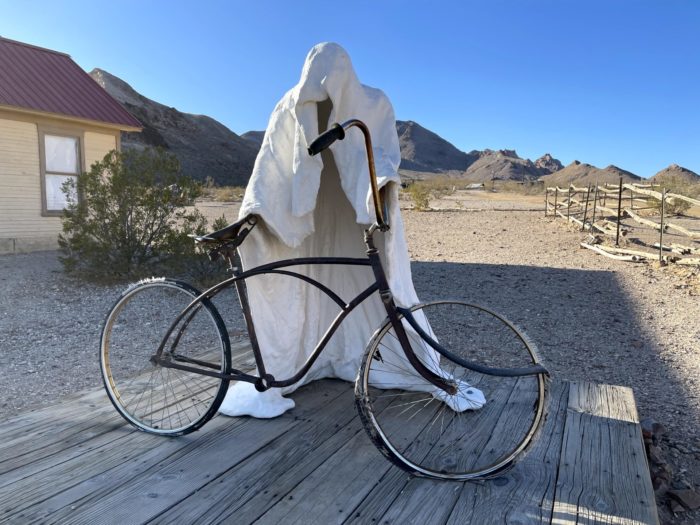 This penguin represents the Rhyolite town symbol. It was said that for most, there was as much chance of finding gold in the desert as finding a penguin. 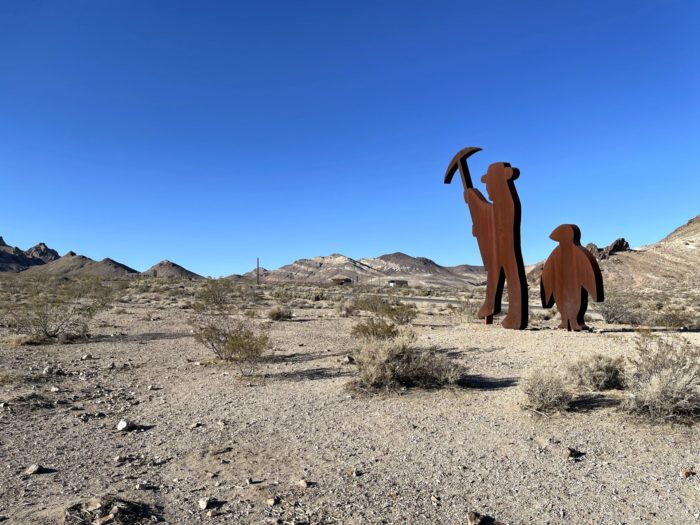 Between the Rhyolite ghost town ruins & the Goldwell Open Air Museum, this mostly-abandoned area in the Nevada desert is an oasis for anyone looking for something just a little bit different along their journey.

Here are some great Death Valley tours & other things to see & do in Beatty.

If you’re looking for a place to stay near Rhyolite, check out these Beatty hotels.