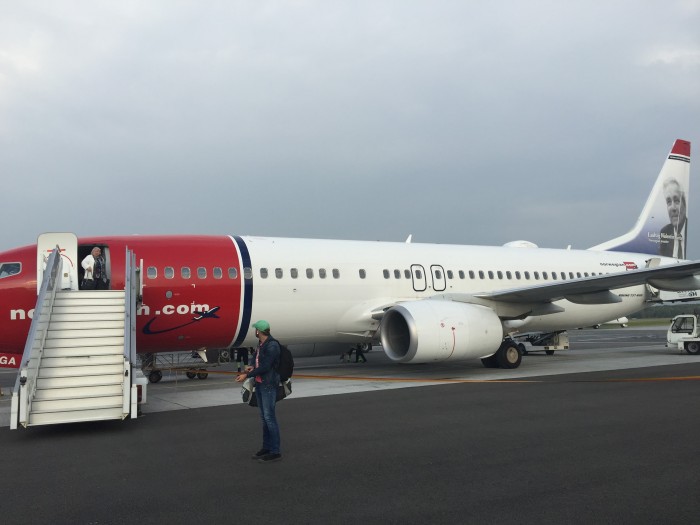 My next stop after Copenhagen was Riga, Latvia. With the number of discount airlines around Europe and a flight time of less than an hour, flying was a no-brainer.

I had a couple of options for direct flights, Norwegian and Air Baltic. Air Baltic had just gotten in trouble for having drunk pilots not too long before my trip, so I decided to go with Norwegian. My one mistake was not paying a bit more to get a better flight time. I really need to learn that I am not well-suited to 7am flights, and I should just spend extra money rather than 1) having to wake up early and 2) having to cut short my previous night out.

I rode the Copenhagen Metro at 4:45am. At that time of the morning the trains were infrequent, and I barely caught a train by a minute or so. I’d actually contemplated skipping buying a ticket since I was having issues with the machine, but luckily it finally worked. This was a good thing, as they were actually doing fare inspections that early!

Norwegian Air is best known in the United States for their ridiculously cheap flights to Europe, but they have intra-European flights as well. Much like the transatlantic flights, the base fares are cheap, but you pay extra for add-ons.

As soon as I arrived at CPH, it was clear just how Norwegian manages to keep costs so low. I went to go check in, but only found a bag drop. First, I had to print my boarding pass, then print the luggage tag and attach it myself. I don’t necessarily mind doing this, but I’m certainly no expert at attaching the long printed sticker, unlike an agent who would be doing that all day long every day. After a couple of minutes of making sure I had everything right, I finally made it to the bag drop, scanned my bag, put it on the conveyor belt, and then I was on my way.

I had about an hour to kill, so I visited the Aviator Airport lounge. You can read my review here.

After relaxing in the lounge, it was time to head to my flight. The boarding area was interesting, with individual bathrooms scattered at each gate, like they had been dropped in as an afterthought.

Boarding began about 20 minutes after I arrived. Once again, it was self-service. I scanned my boarding pass, it beeped, and I was good to go. If you know what you’re doing, you can fly on Norwegian without ever personally interacting with another human being. On one level, it’s kind of cool, on another level, it’s a little odd. But hey, if you don’t need to talk to anyone and it saves some money on a flight, then I suppose it’s not bad. I just wonder what happens if anything goes wrong and you need some assistance, but there was at least one person at each stage, so I’d like to think they’d be able to handle at least small issues as long as there wasn’t a complete system meltdown. 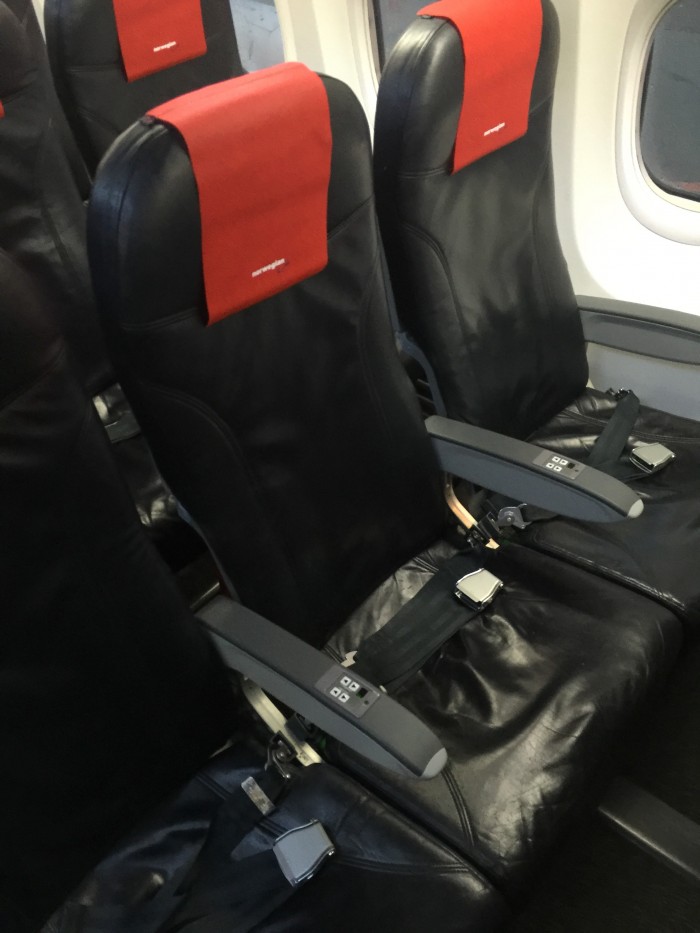 I was flying to Riga on a Boeing 737-800. Despite Norwegian being a discount airline, there was more than enough legroom. This is one of the benefits of the new slim seats that airlines are installing. As long as they don’t start to pack the rows even closer, that’s fine with me. It also helped that I had kept an eye on the seat map when I checked in, and moved myself to a row where there was nobody in the middle seat. All-in-all, the flight ended up being more comfortable than I expected. Even though it was only an hour, I wouldn’t have had any issues if it had been a few hours longer. 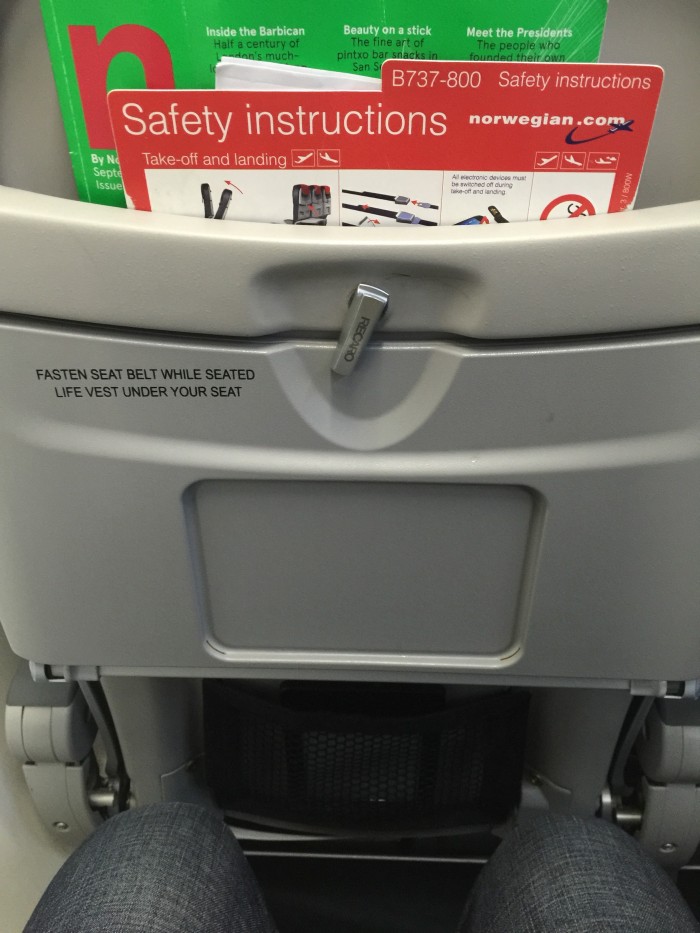 One of the nice perks of flying on Norwegian is that they offer free WiFi. The quality was actually decent, better than Gogo. I don’t know how many people were actually using it, but it was nice that it was there. Flight info was also accessed via phone. 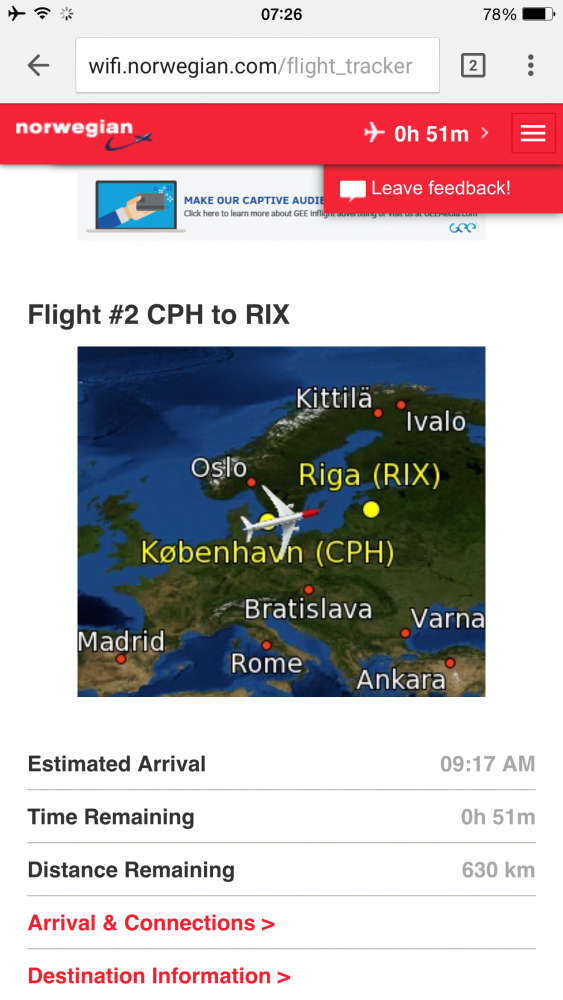 After the quick 55 minute flight we were on the ground in Riga. I was impressed by Norwegian Air. Having flown EasyJet and Ryanair before, I think that Norwegian Air gives a far better experience, at least based on this one flight. I’ll be highly considering them in the future. Eventually, I’ll give them a shot on a transatlantic flight. 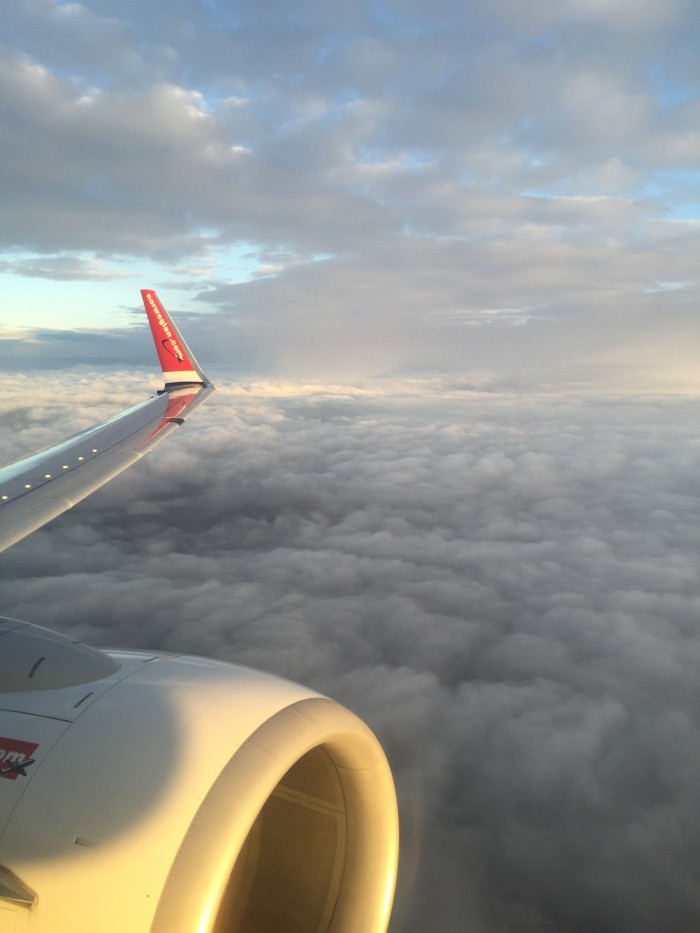