New Zealand is one of the first places in the world to ring in each New Year, so for 2016, I chose to go to Auckland, which hosts the largest show.

By the time I checked in to my hotel after taking the long bus ride from Wellington to Auckland, it was already 9pm. It was windy outside, and I could tell that storms were coming. While New Year’s Eve was fine, it would rain the rest of my time in Auckland, tempering my enjoyment of the city. 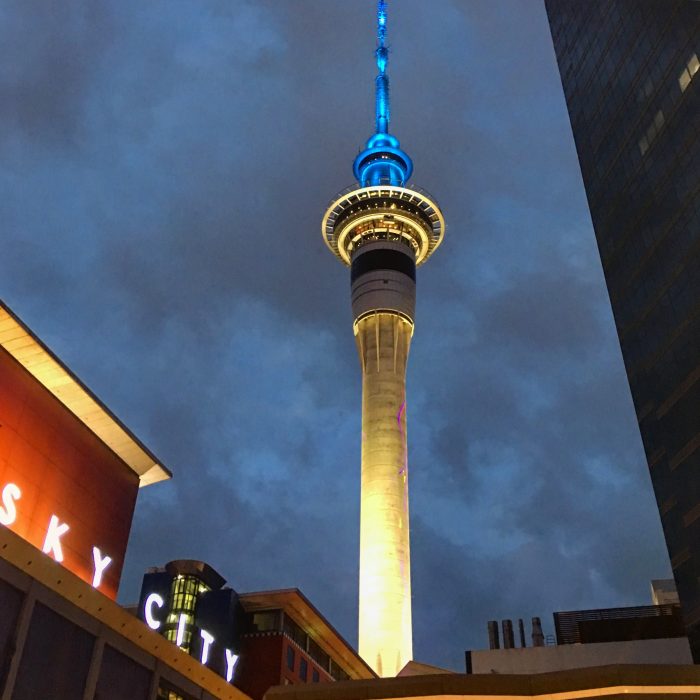 I’d looked up where I should go for my first stop of the night and found a great little brewery called Brothers Beer right in central Auckland, near the Skytower, which is where the New Year’s fireworks show takes place.

I rushed to the bar since they usually close at 10. I had a pizza because I needed some food. Prior to eating it, I made a New Year’s resolution to burn my mouth less on pizza. So far, so good. The pizza was called the “carnivore”, and it had spicy salami, manuka bacon, and smoked ham. The spicy meats were actually spicy, which was great. It went well with my first beer of the night. 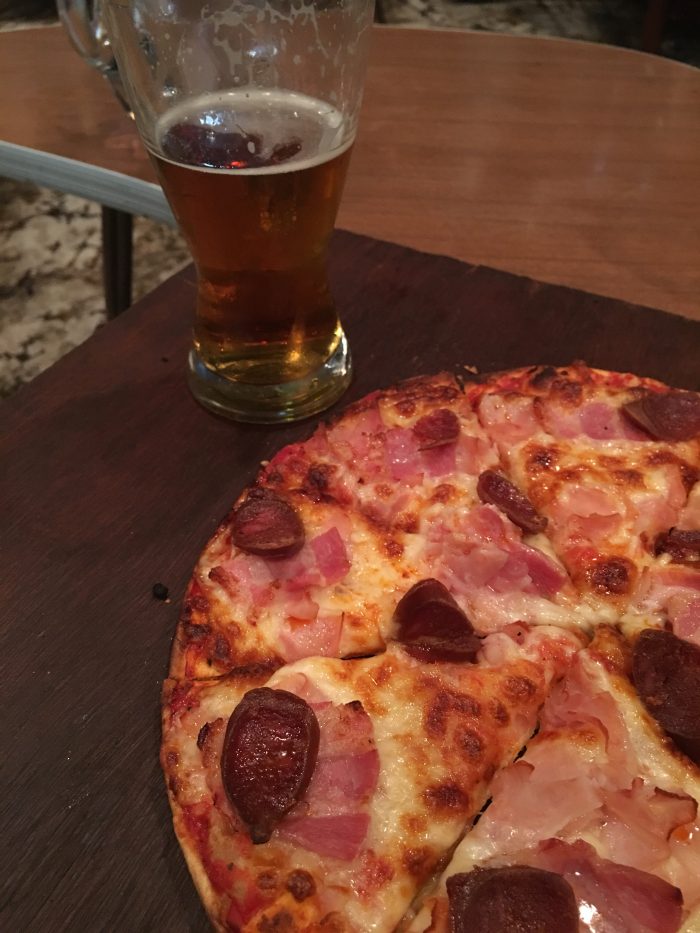 After I ate, I realized that the bar would be staying open late that night for New Year’s Eve. There was a large outside patio in the parking lot that I realized would be a perfect spot to watch the fireworks from, so rather than press my luck to try and find another spot, I decided to stay. I had more flights of beer while I waited for midnight. 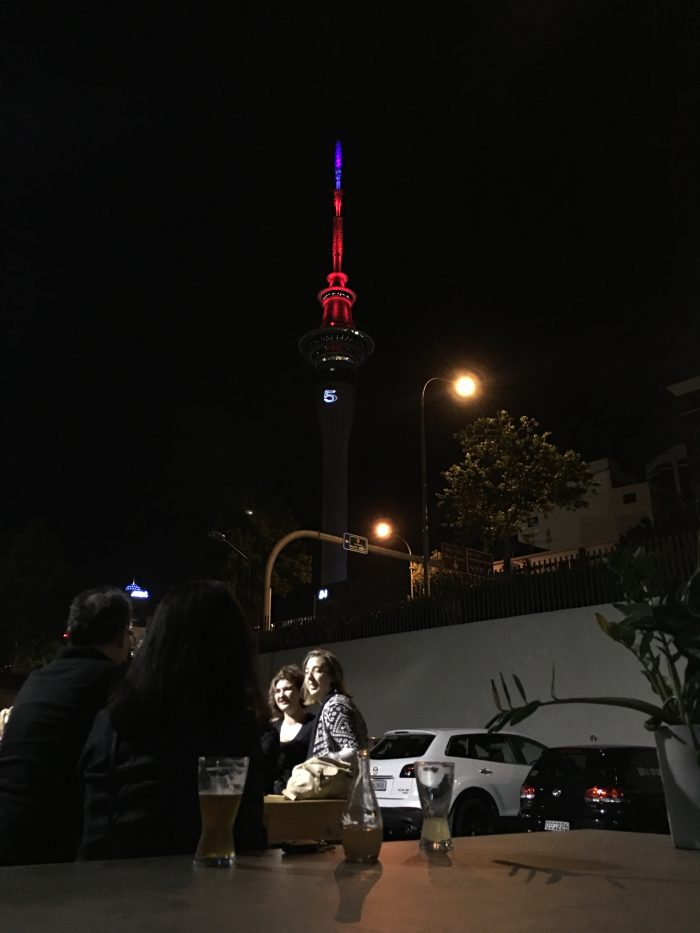 Around 11, more people started to show up for the fireworks, most of whom were driving and parked in the parking lot where the patio was. This was a bit meh because the people weren’t actually going to the bar, just instead taking advantage of their parking & causing a nuisance for everyone who was out enjoying the nice breeze of the evening. At 11:53, in an act of premature newyearsilation, someone started to set off fireworks, which got the crowds cheering.

Finally, it was midnight. 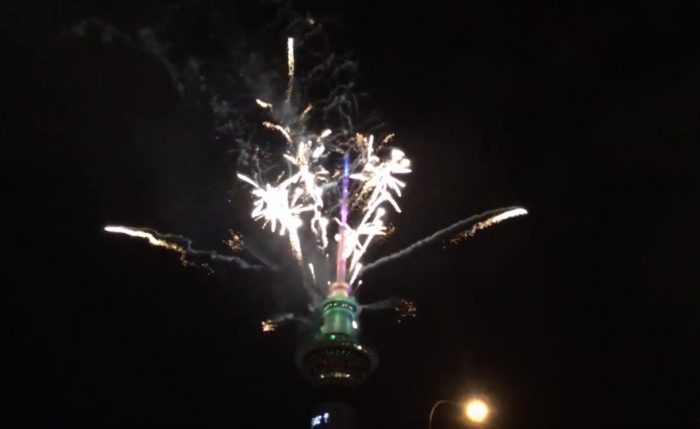 Brothers Beer is the perfect spot to watch the New Year’s fireworks in Auckland. They’ve got great craft beer, food, and a fantastic view of the fireworks from the Skytower. While a parking lot might not seem like the greatest atmosphere, the fireworks take place right above you. That’s not an exaggeration. Here’s another video I shot of most of the fireworks show, including the grand finale. Pay close attention near the end, and you’ll see a fireball get closer and closer. It landed in the parking lot about 100 feet away from us, fortunately in an area that was empty.

After the bar closed, I decided to go to the waterfront to see what else was open. Church bells were ringing. The crowds were getting crazier as I headed closer to the areas that had more bars. Many of them were closing, aside from the clubs, so there were a lot of people out who had no clue what to do next. The waterfront was nice, but since the bar I’d wanted to check out was closing, I called it a night and started the long walk back to my hotel.

It was at this point that the night took a bit of a negative turn. The wandering people I mentioned earlier who weren’t sure what to do next were milling about the CBD. I saw several instances where a few men would begin to follow women who were walking alone or in a pair. Unlike what I would later hear about New Year’s Eve in Germany, I didn’t see any acts of violence or physical harassment. However, when you happen to be walking behind a woman, and then a couple of guys suddenly turn and start to follow her for a bit, or you’re walking behind guys, and they reverse to follow a woman, you can’t help but take notice. There was a large police presence keeping an eye on things, and there were other people like myself who I could tell were keeping an eye on the sketchiest people as we passed, but it still left me with a bad feeling. Whether you’re traveling or at home, we all need to watch out for each other. And if you don’t respect women, then perhaps you should learn how to do that very quickly so everyone can celebrate New Year’s or any other day without having to worry about what you might to do to them.

All of that aside, Auckland is a fantastic place to ring in the New Year. If you want to spend your New Year in a place with long summer days & be one of the first to celebrate, you’d be hard pressed to find a better spot than New Year’s Eve in Auckland, New Zealand.