After a few days in Wellington, it was time for my final journey through New Zealand on the bus ride to Auckland. Thanks to booking early on Intercity, the ticket cost only $1 NZD.

Following the 20 minute walk from my hotel, I arrived at the bus station in Wellington about 35 minutes early, and although the bus was already there, there were only a couple of people on. 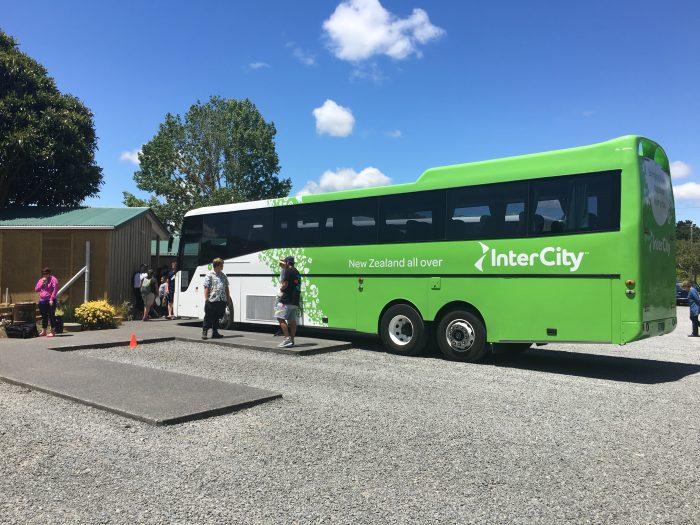 I’d been accustomed to the bus services in New Zealand being very tour-like, but in this case, there was little narration. This is what I would have expected on a normal bus, but following my nice long rides on buses on New Zealand’s South Island, it was a bit of a let-down.

The first stop wasn’t for two hours, which is typical, though it was a bit more of an inconvenience since this bus had less legroom than the other buses I had been on. Since I’d be on the bus for 11 hours, this wasn’t a good thing. Our first stop was in Poirira, where the half-full bus then became filled.

The drive between Wellington & Auckland follows the west coast of the North Island for a while. Despite the fact that the journey is between the two largest cities in the country, it’s surprising that there isn’t much of a highway system in between. 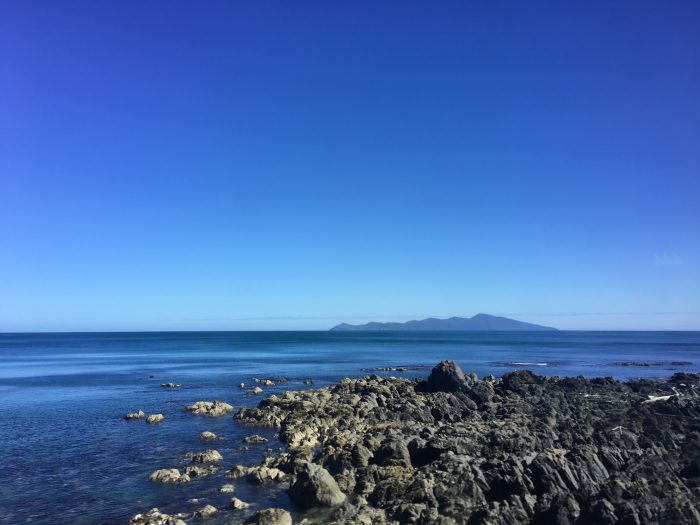 There were a couple of more stops in Foxton, then in Bulls, where a lot of people got off and on. I was surprised that not many people would end up doing the whole journey between Wellington & Auckland.

Finally, in Flat Hills, we had a long stop at a cafe where we could have lunch. I had a cheese scone & a dessert. 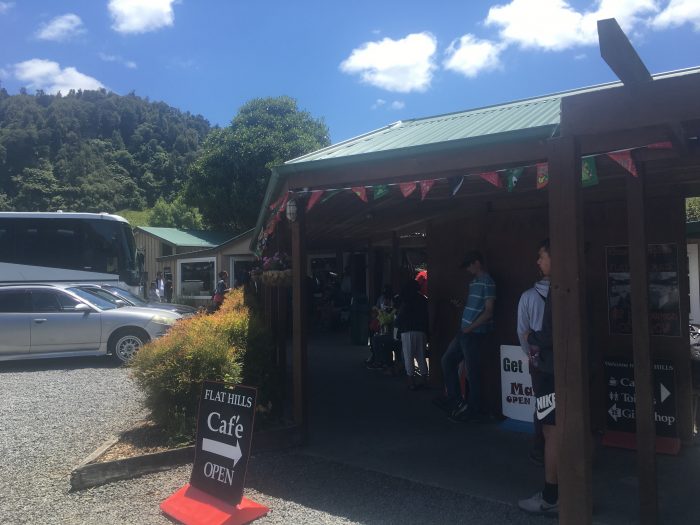 The stop had a maze, a farmyard, a garden, and some old rusting farm equipment. It’s interesting how places like this have sprung up in spots where it’s nice for bus stops and breaks. I took a quick walk around the garden, then made a new goat friend over at the farm. 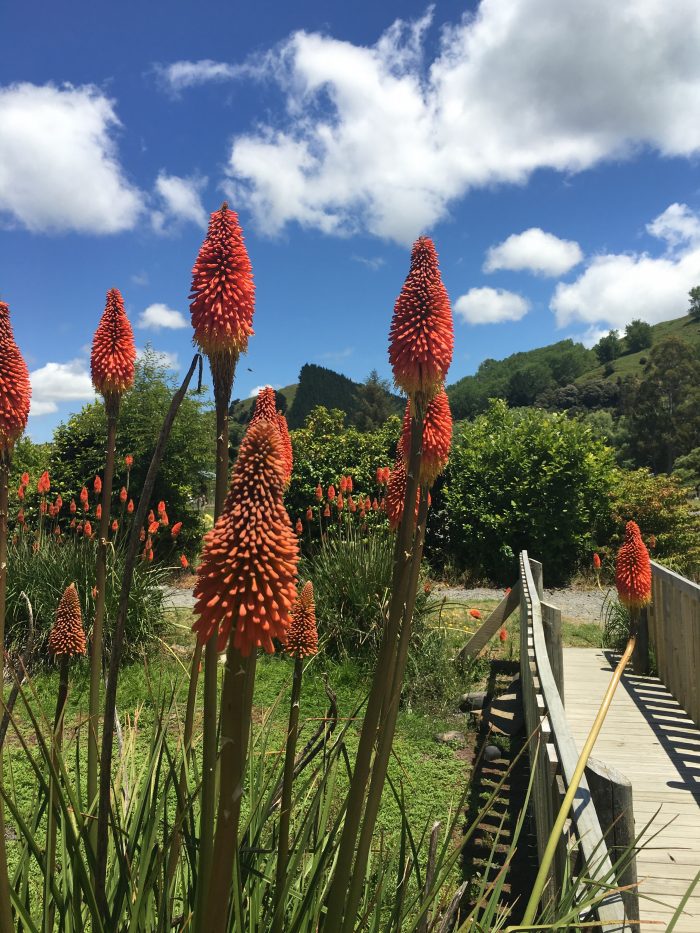 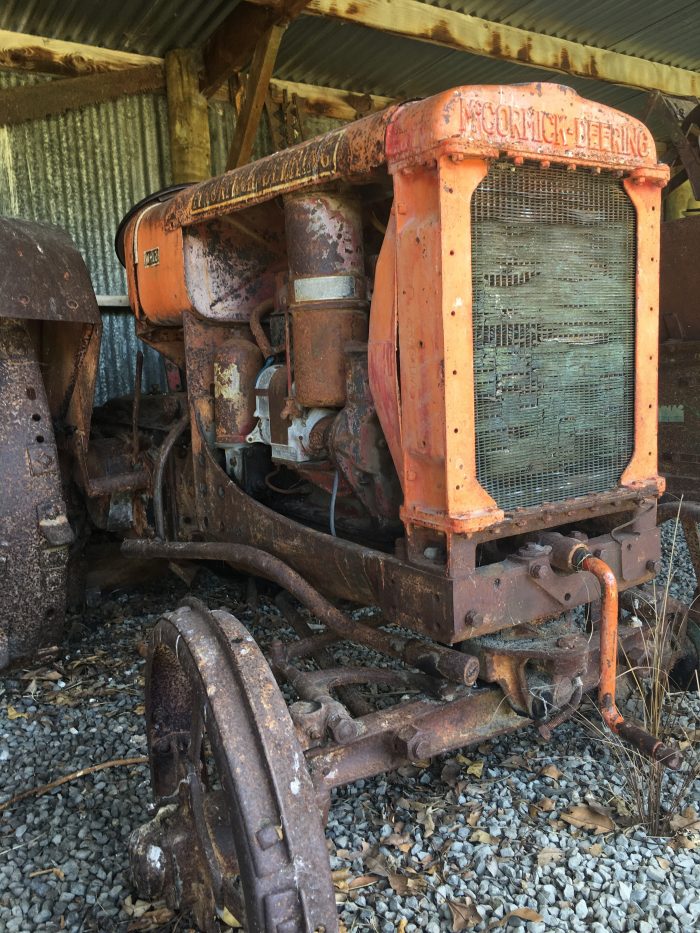 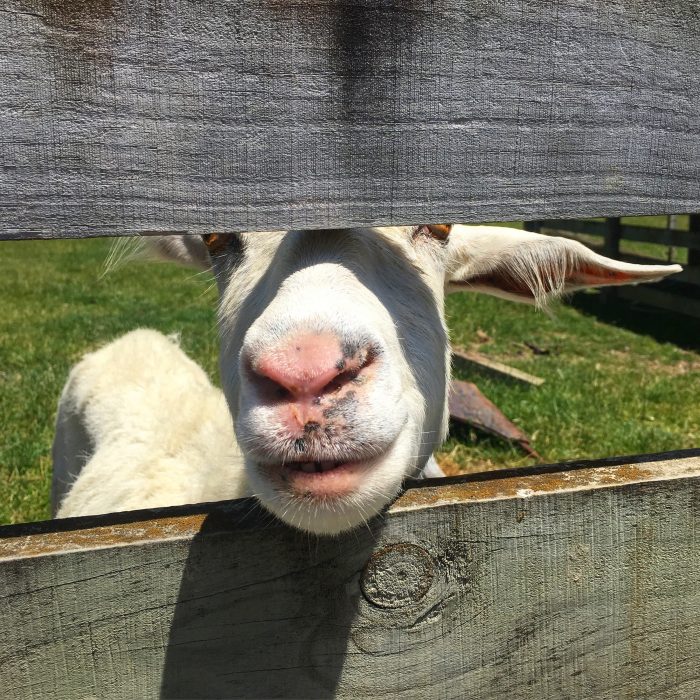 After Taihape, we then began to travel through one of the more desolate areas of the North Island. Tongariro National Park includes Mt. Doom of Mordor from The Lord Of The Rings trilogy. The actual name is Mount Ngauruhoe, and next to it is the larger, snowier Ruapehu. You could see for miles around from the road., which traverses the outskirts of the national park. To fit the mood of the set, the skies grew darker & more cloudy as we approached. The power lines resembled the Eye of Sauron. 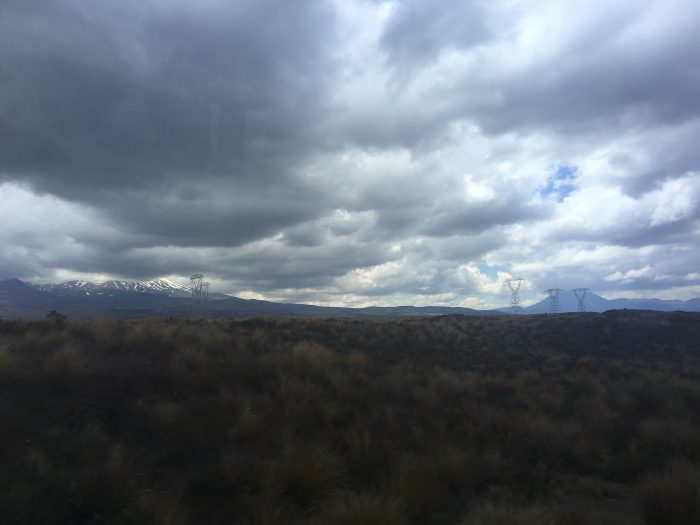 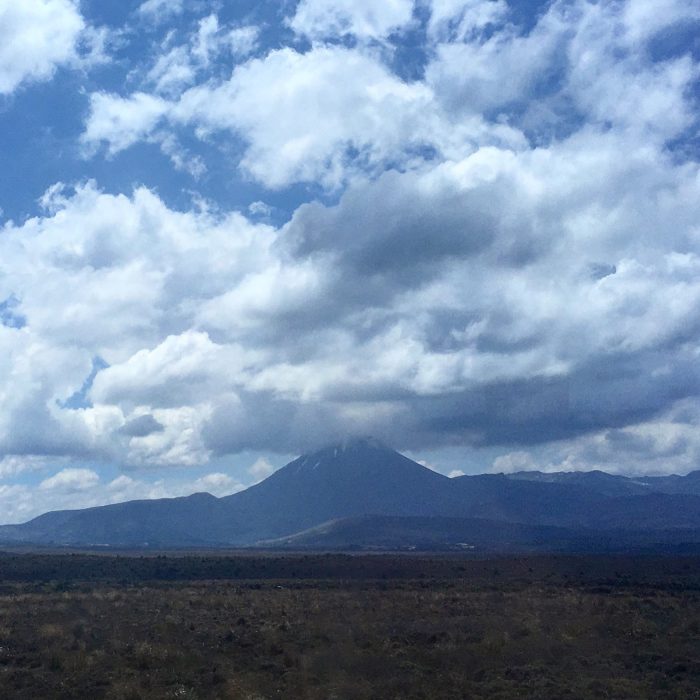 The stark dramatic landscape was a perfect setting for the films. This area has seen recent volcanic eruptions, and recent alerts remind visitors that this land is still dangerous.

At Turangi, about halfway through our journey, we had a restroom break where some people got off. I switched to the other side of the bus so I could get my own row, and also some more legroom. It’s interesting how between the views, the sun, and the differences in legroom, there are some choices to make as far as finding the perfect seat.

The next leg of our journey passed Lake Taupo. The lake is inside a giant crater, so for the first part of the drive, you can’t see much due to the slight rise of the crater. Eventually, the road opens up as you descend into it. The lake resembles Lake Tahoe in California/Nevada. 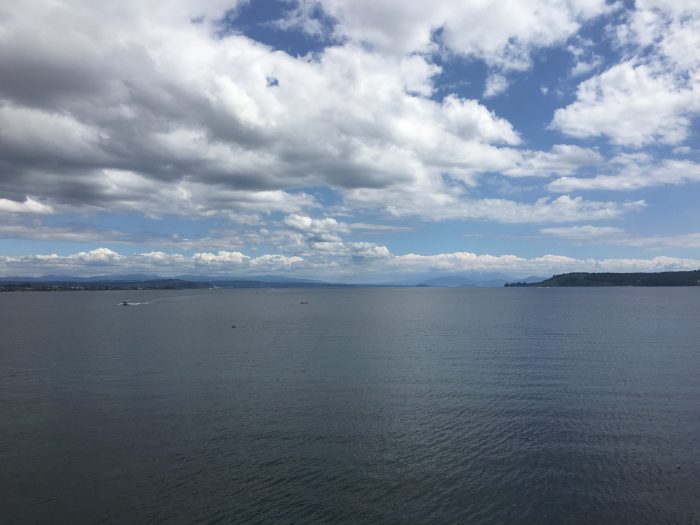 Taupo was our second long stop of the day. It was scheduled for about 30 minutes, but it would end up being much longer than that. At Taupo, we had 21 people leaving the bus, but 26 people joining, so the bus was still going to be packed. I left to go take a walk around the lake & surrounding parks for a bit. It was New Year’s Eve, so there were a lot of people out enjoying the nice weather.

I got back to the bus only to find that we were going to have to keep waiting for a connecting bus. We ended up leaving Taupo almost 40 minutes late, which was frustrating not only because of the delay, but because everyone already on the bus couldn’t even go anywhere during that delay. I’d timed my walk for 30 minutes, only to find that we had much longer to wait.

Given how crowded the bus was, it’s unsurprising that I ended up with someone sitting next to me. Normally this wouldn’t be a big deal, but in this case I ended up with the chattiest ginger kid in the world sitting next to me. He wasn’t traveling alone, but he was separated from his family, and he saw this as a chance to latch on to me for conversation, despite the fact that I was exhausted & wearing headphones. I did manage to listen to Led Zeppelin’s “Ramble On”, which was an unofficial anthem of the ride thanks to its travel & Lord of The Rings themes, but otherwise I had to keep popping my earbuds out so as not to completely ignore the kid.

Sitting next to this kid was like sitting next to a miniature coke addict. He was bouncing around the seat the entire time, making it the longest leg of the journey for me. Because I’m American, he had to ask me about the TV show “Friends”. He tried to remember all the characters, but he started with Ross, and then forgot two of the others. If you’re going to forget about a character from “Friends”, Ross is the first one you should be forgetting about, because he is the worst.

In Tirau, we saw these interesting buildings which had been constructed in the shape of a sheep and a dog. 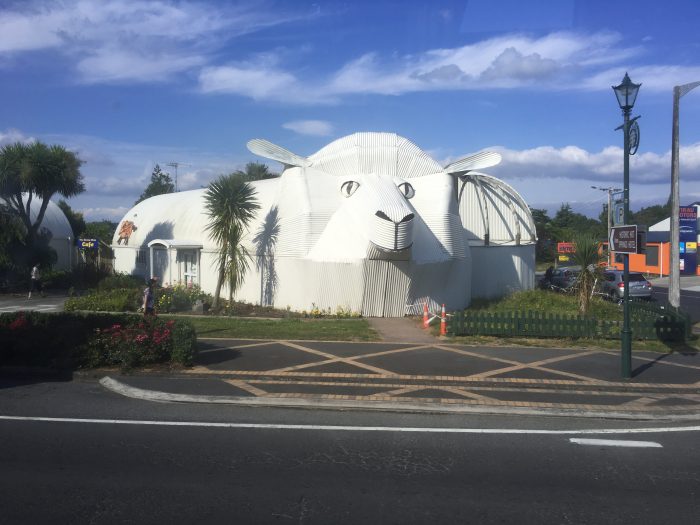 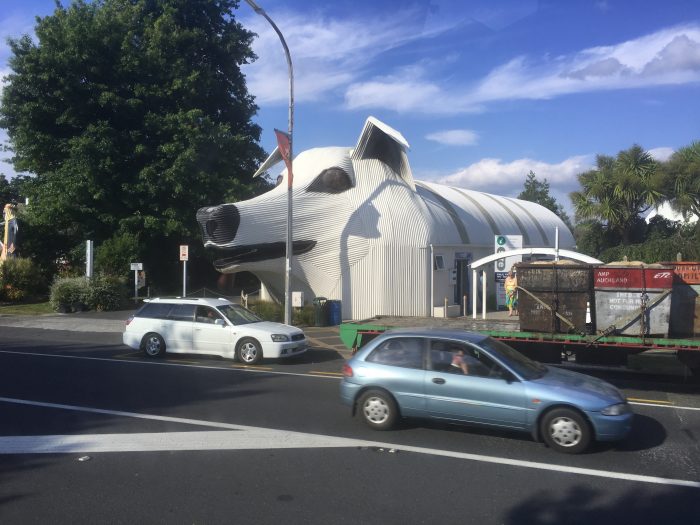 Finally, just before Hamilton, we were on a decent highway that looked brand new. In Hamilton, lots of people got off the bus, including the kid, who had clearly been mainlining sugar before he had boarded.

Despite our delays, the bus driver did a great job of making up time after Hamilton. We had been 45 minutes behind at one point, but thanks to a shorter stop there and a lack of traffic, we ended up arriving in Auckland on time. That said, despite the entire bus ride costing only $1 NZD, I can’t recommend it. While the area of the North Island near Tongariro National Park was gorgeous, most of the rest of the journey was not all that special. I wished that I had spent a bit more to have taken a flight between Wellington & Auckland, which would have given me more free time, rather then arriving in Auckland fairly late on New Year’s Eve.