One of my favorite parts of traveling is getting to try new local pastries around the world. In Valencia, Spain, the local specialties include horchata, fartons, & buñuelos, all of which can be found at Horchatería El Collado. Each afternoon, locals line up at the restaurant from opening to closing to get their hands on these sweet goodies.

People from the United States might be familiar with horchata, having encountered the cold, milky drink in Mexican restaurants. However, while Mexican horchata is made from rice, Spanish horchata in Valencia is made from tigernuts. It’s believed that tigernuts were brought to Spain from North Africa during the Middle Ages, & horchata was a popular beverage for a culture that did not drink alcohol. That said, these days you can find tigernut craft beer in Valencia.

Horchata is made by washing, then soaking tigernuts. The tigernuts are then ground in a mill and mixed with water. Solids are sifted out, and the resulting extract is mixed with sugar.

Production of horchata & tigernuts is serious business in Valencia. There is a regulatory council called Chufa de Valencia that ensures that tigernuts & horchata produced in Valencia meet the Regulatory Council of the Denomination of Origin quality requirements. Their website also provides helpful information such as “Valencian popular tradition considers tigernut milk (horchata) as an effective remedy against diarrheal disorders.” You’re welcome.

Whatever your gastrointestinal status, you can find horchaterías all over Valencia. One of the best known horchaterías in Valencia is Horchatería El Collado in Ciutat Vella, which is where I went for horchata & fartones. 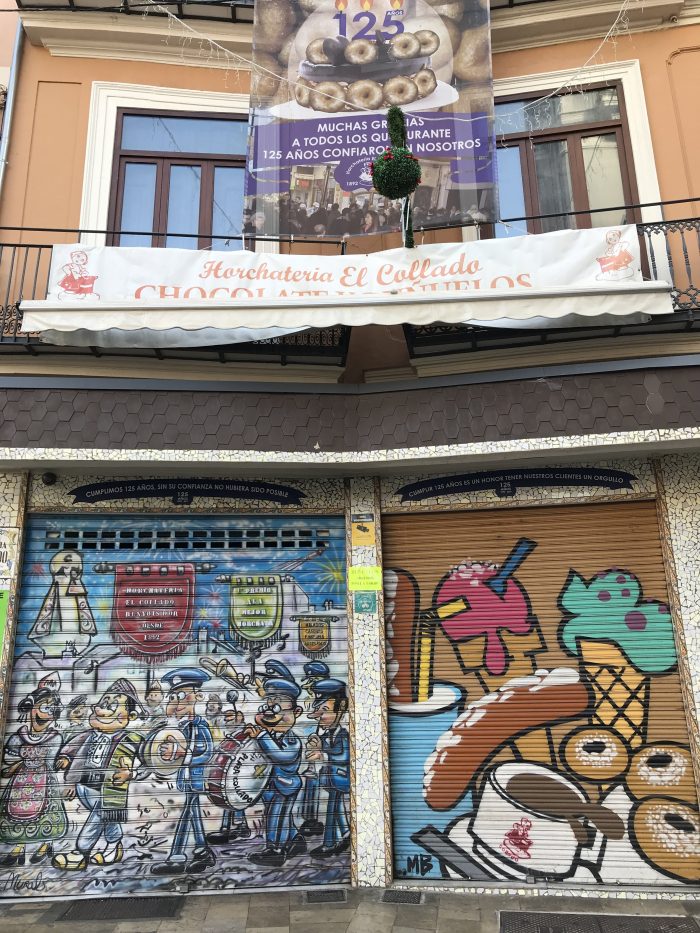 An order of horchata at Horchatería El Collado isn’t complete without an accompanying order of pastries. The year-round favorite partner snack is called the farton. Fartones can best be described as a light dough stick. They’re made from flour, milk, sugar, oil, eggs and a leavening agent, with a bit of icing on top. The resulting pastry is lighter than a croissant or a typical bread. 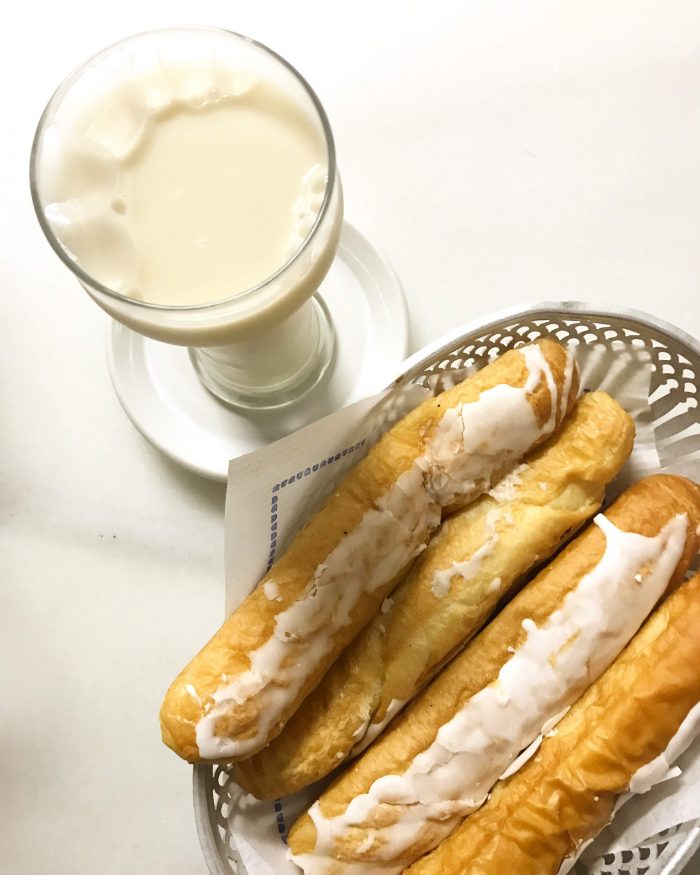 The sponginess of fartons has a purpose. They were created specifically to go with horchata, and the idea is that you dunk the fartons in the horchata. Whether or not you actually do this is completely up to you, as both horchata & fartones are delicious on their own, or in combination.

During the non-summer months, there’s another pastry option at Horchatería El Collado. You’ll spot it the second you walk past the shop, as the necessary fryer is set up right in the doorway, beckoning visitors to stop. 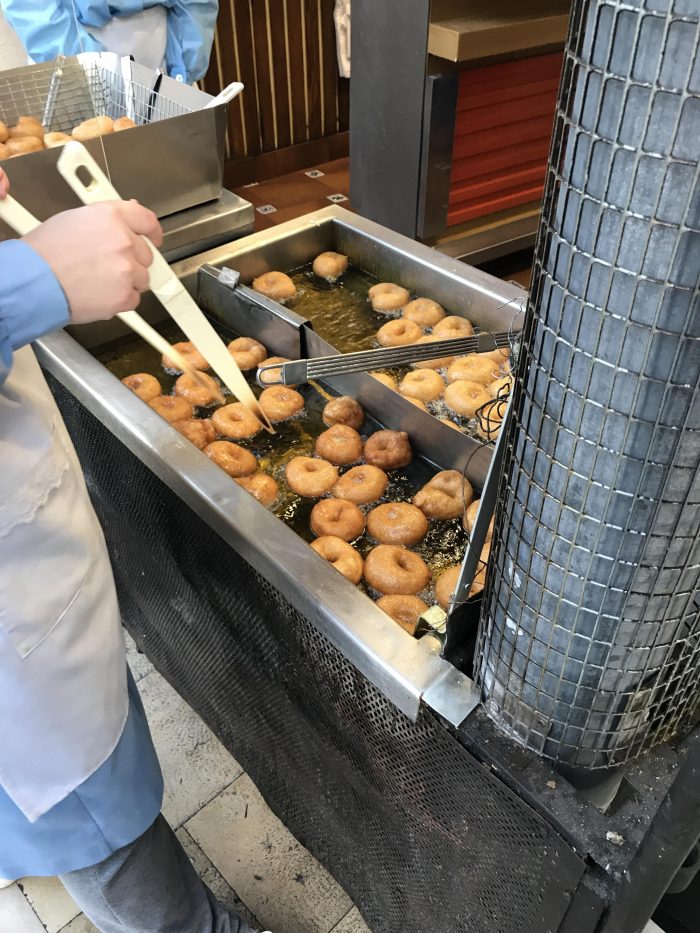 This fryer is used to make buñuelos, another popular local pastry in Valencia. Buñuelos are Spanish fried donuts. If buñuelos look familiar, that’s because they are. Nearly every culture has some variety of fried dough like this.

In various places around the world, buñuelos can have various fillings or toppings, but at Horchatería El Collado, they’re simple. Here, the freshly fried dough stands alone with a bit of sugar, a perfect hot match with a horchata on a chilly winter day. 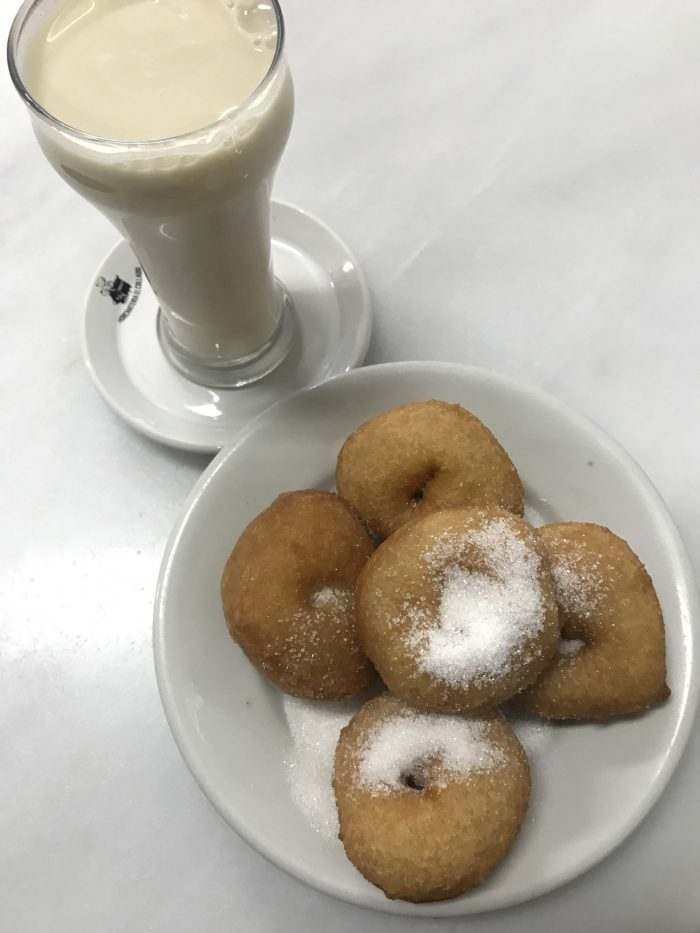 Whatever time of year you’re visiting Valencia, live like a local & have an afternoon snack of horchata & fartons or buñuelos, your stomach will thank you!

Have you ever had any of these Valencian snacks? What did you think of them?