My final hike in Seoraksan National Park was to Heundeulbawi Rock, Gyejoam Grotto, & Ulsanbawi Rock. The trail to these landmarks is just past Sinheungsa Temple & its giant Buddha. Saving the temple for my return journey, I crossed the new stone bridges & headed up into the hills. 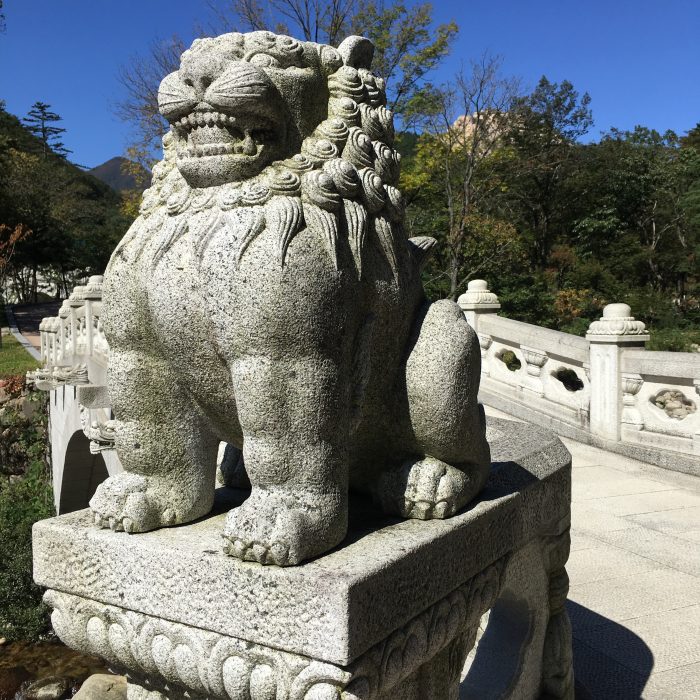 The trail to Heundeulbawi Rock is 2.3 kilometers long. The first section is slightly uphill & paved concrete. Eventually this gave way to a few staircases and some platforms. After that, the trail was a gradual rocky uphill climb, but still nothing bad compared to some of the other trails I had been on. 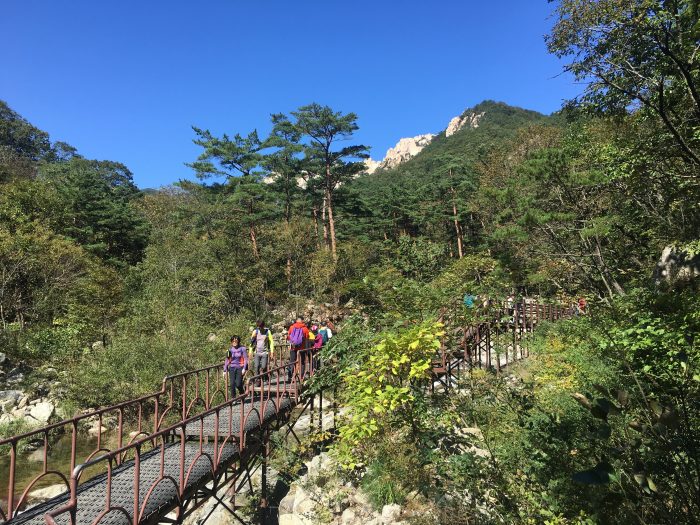 Earlier in the day I had done the hike to Biryongpokpo, Yukdam, & Towangseong Falls, and it had been packed full of people. Fortunately, the Heundeulbawi Rock, Gyejoam Grotto, & Ulsanbawi Rock trail was much wider & way less crowded.

Less than a kilometer from Heundeulbawi, there were some bathrooms. The trail continues to get steeper past this point, but it’s still nice and wide. I passed stone urns and stacked stones. The whole route was quite pleasant, as the abundance of trees provided plenty of shade. 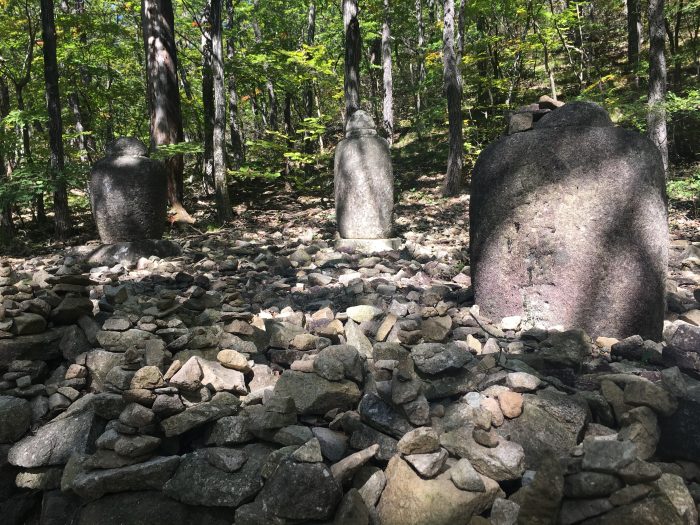 Finally, after about 50 minutes of hiking, I arrived at Heundeulbawi Rock & Gyejoam Grotto. This was one of my favorite places in Seoraksan National Park. 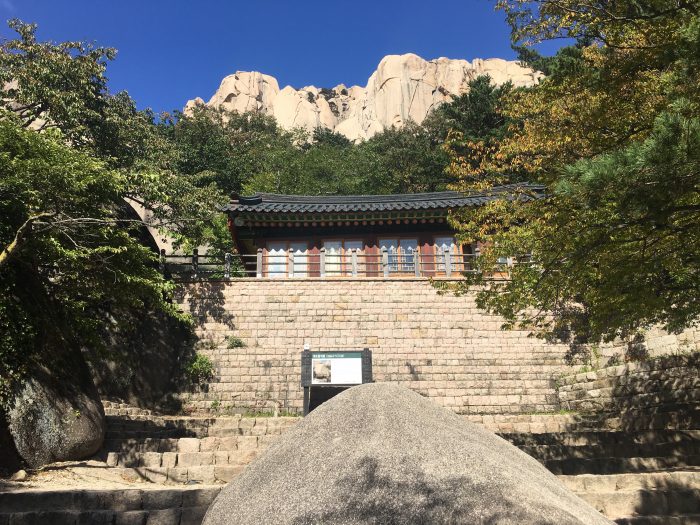 Heundeulbawi is a large rock that rests on top of a larger stone platform. The rock rocks back and forth when pushed. Needless to say, it’s a popular photo spot. 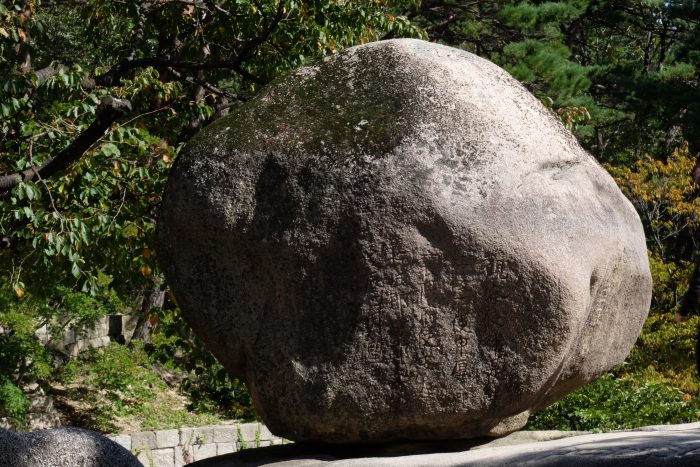 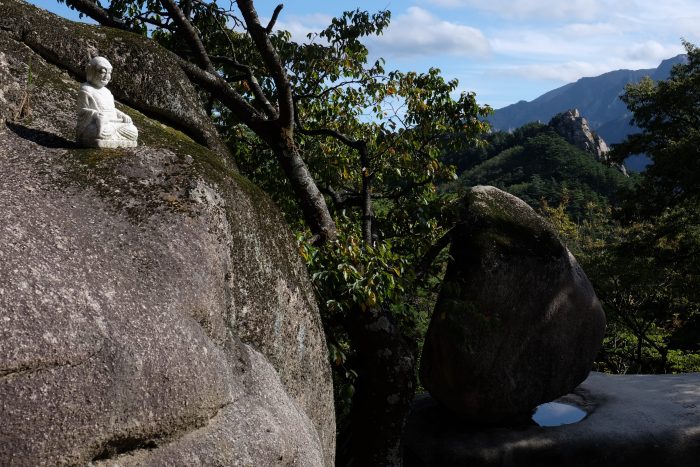 Behind Heundeulbawi is Gyejoam Grotto, a hermitage built into the mountain. The grotto is a peaceful space. Recorded chants fill the air. 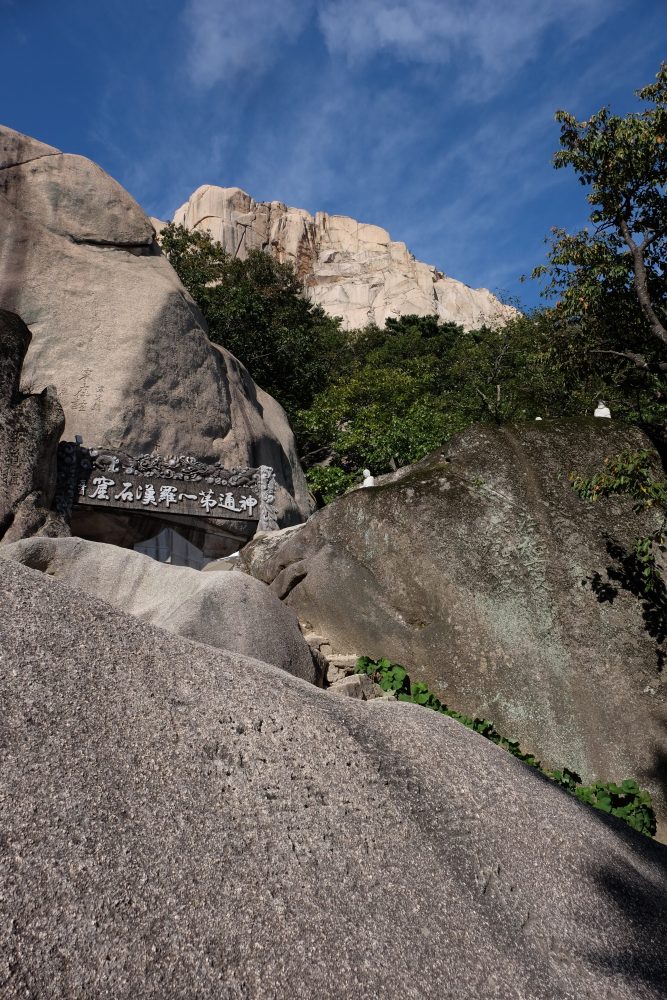 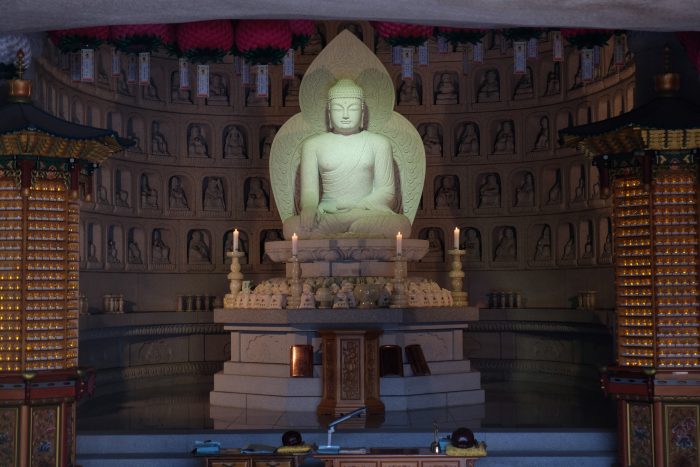 The whole area has interesting views, so be sure to spend some time here exploring every corner.  There are random outcroppings & rock formations that can easily be overlooked. 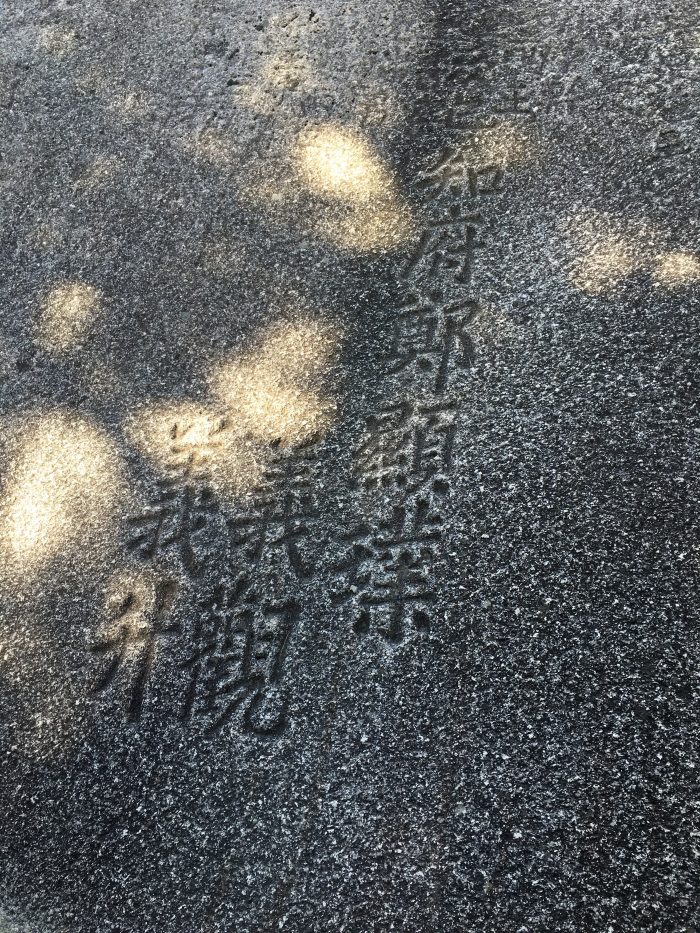 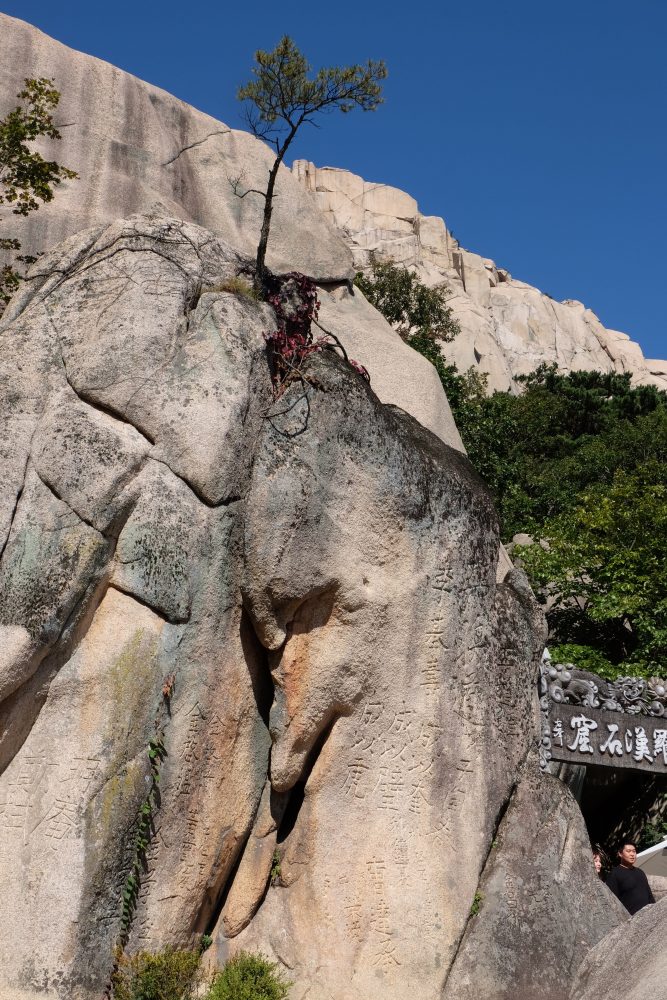 After checking out all of Heundeulbawi & Gyejoam Grotto, it was time to continue along the trail toward Ulsanbawi. The summit is about 1 kilometer away. The trail continues to get steeper, with lots of staircase sections. The views across the park continued to be incredible. The hiking trail included flat pieces of wood in between the rocks to make the path easier. I had never seen this before, but it’s a great idea.

About 0.4-0.5 kilometers from Heundeulbawi, there is an overlook atop a rock. This viewpoint has some of the best views in Seoraksan. In front of you, the rest of the park expands below you. 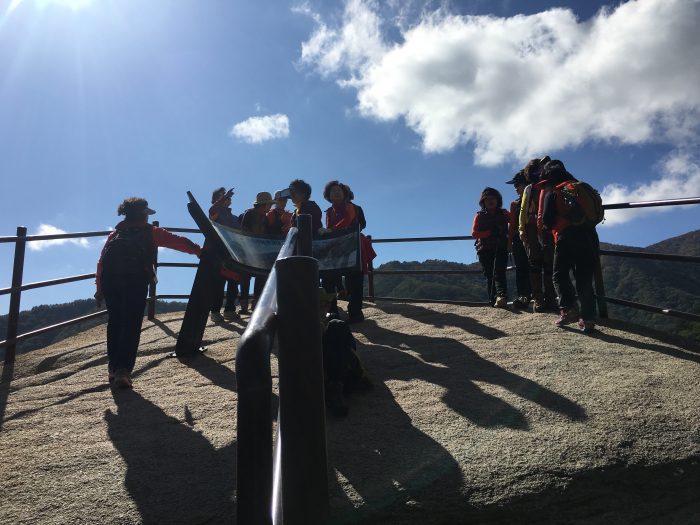 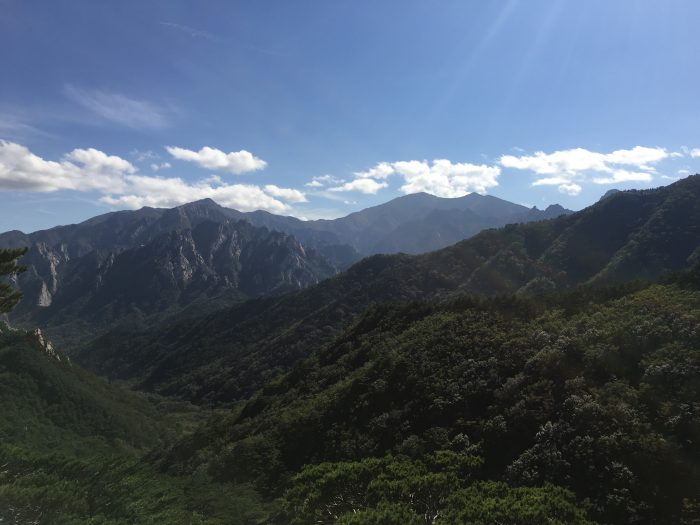 Turn around and look above, and you see Ulsanbawi towering in all its glory.

If you’ve had enough, this point makes a decent turning back point. After hiking just a little bit more, that’s just what I did. I had reached a point where the trail was heading straight uphill. By that point I had already spent a separate half hour climbing up stairs nonstop on my way to Towangseong Falls earlier that morning. I had no desire to repeat that feat. It was getting late in the afternoon, and summiting & returning would have taken at least another hour, putting my return closer to dark than I would like. Yes, I didn’t make it all the way to Ulsanbawi, but the trail was spectacular nonetheless. 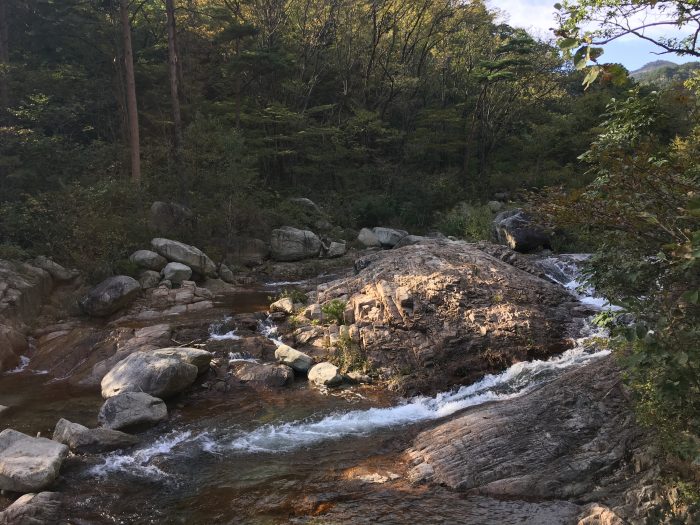 I took my time on the descent, then walked through the Sinheungsa Temple grounds I had passed a couple of times before. While the temple itself was fairly standard, the surrounding mountains made for a beautiful view. 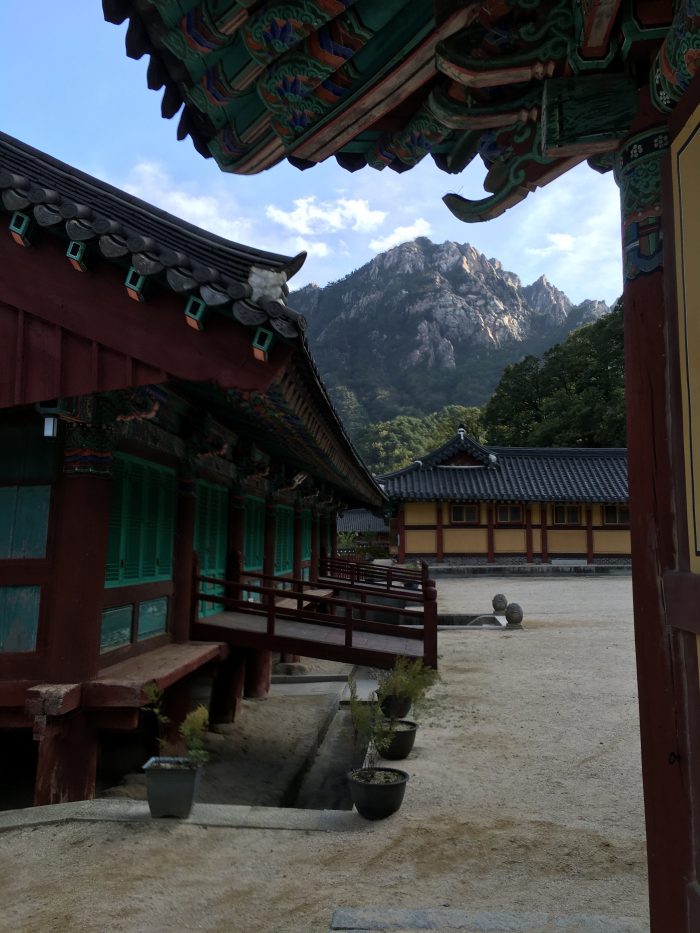 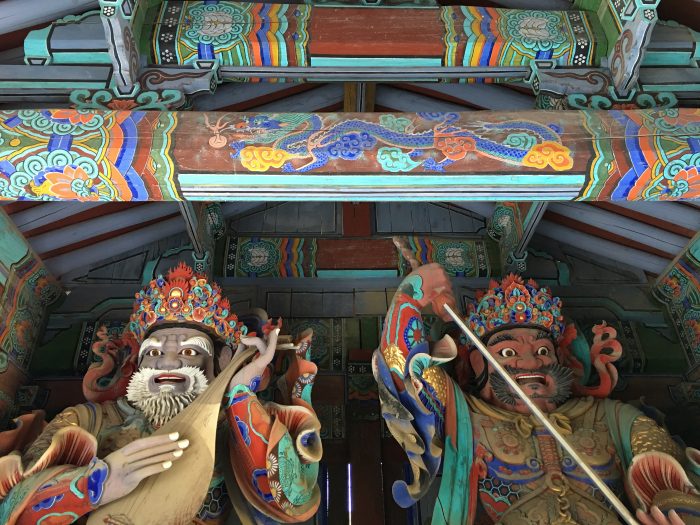 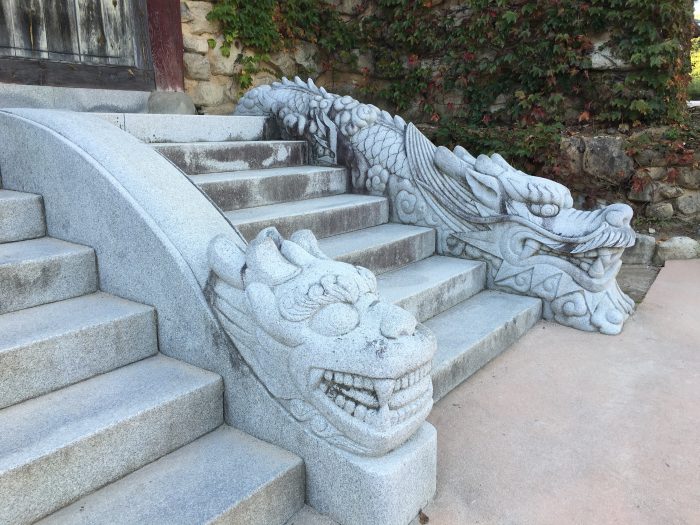 Just outside the temple there was a hipster coffee house. In one way it felt out of place, in another way it felt perfect. By this point in the day, I had hiked over 12 miles, and I still had to walk back to my hotel. I rewarded myself with an orange pineapple-ade sparkling mineral water and some cheesecake. 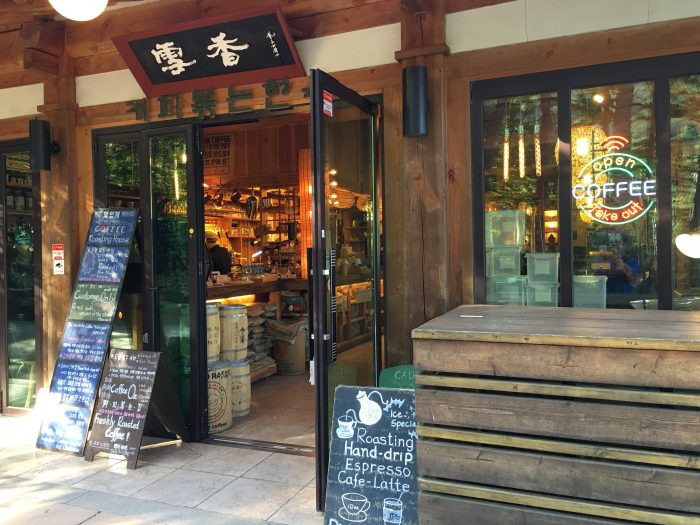 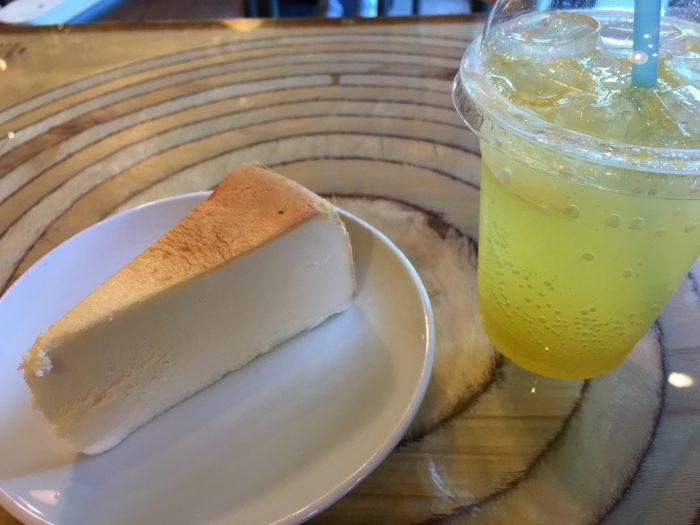 Then it was time for the walk back to my hotel. Along the way, I chatted with a couple of other hikers. We compared notes about the different foods we’d eaten on the trip. They had me beat, as they’d eaten some seafood that was actually still wiggling on their plates. That’s freshness.

There are several nice hikes from the Sokcho entrance of Seoraksan National Park. I was able to do two of them on my second day there. If you don’t have enough time & energy to do both hikes, I recommend doing the Heundeulbawi Rock, Gyejoam Grotto, & Ulsanbawi Rock hike rather than the Biryongpokpo, Yukdam, & Towangseong Falls hike. The waterfall view was nice, but the whole journey was much more crowded. If you’re going to do that strenuous of a final push, do it somewhere with fewer people. I wished that I’d gone the whole way up to Ulsanbawi instead, which I would have been able to had I not done the staircase to the Towangseong Falls viewpoint.

Still, it was a lovely day. Seoraksan National Park is one of the most beautiful places I have ever visited. The hike to Heundeulbawi Rock, Gyejoam Grotto, & Ulsanbawi Rock was a highlight. Many visitors to South Korea only make it to the cities, but this natural gem is worth at least a day or two of your time so you can get a sense of Korea’s true beauty.