On my 2nd day in Seoraksan National Park, I did two hikes. The first was to Yukdam Falls, then Biryong Falls, then finally to the Towangseong Falls overlook. The second hike was to Heundeulbawi & Ulsanbawi. I decided to do the hike to Biryong, Yukdam, & Towangseong Falls first because earlier in the morning the sun would be shining on that part of the park, then the other hike would get more sunlight in the afternoon. 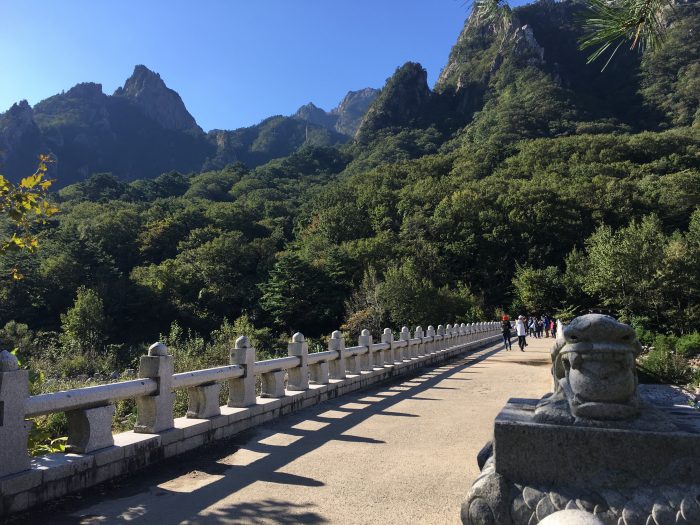 I arrived around 9am, but unfortunately the crowds had already arrived. It was a national holiday (Hangeul Day), and it was also the beginning of the autumn and leaves were beginning to change, so between the two, it seemed like every person in South Korea had descended not only upon Seoraksan National Park, but also upon the trail to Biryong, Yukdam, & Towangseong Falls. 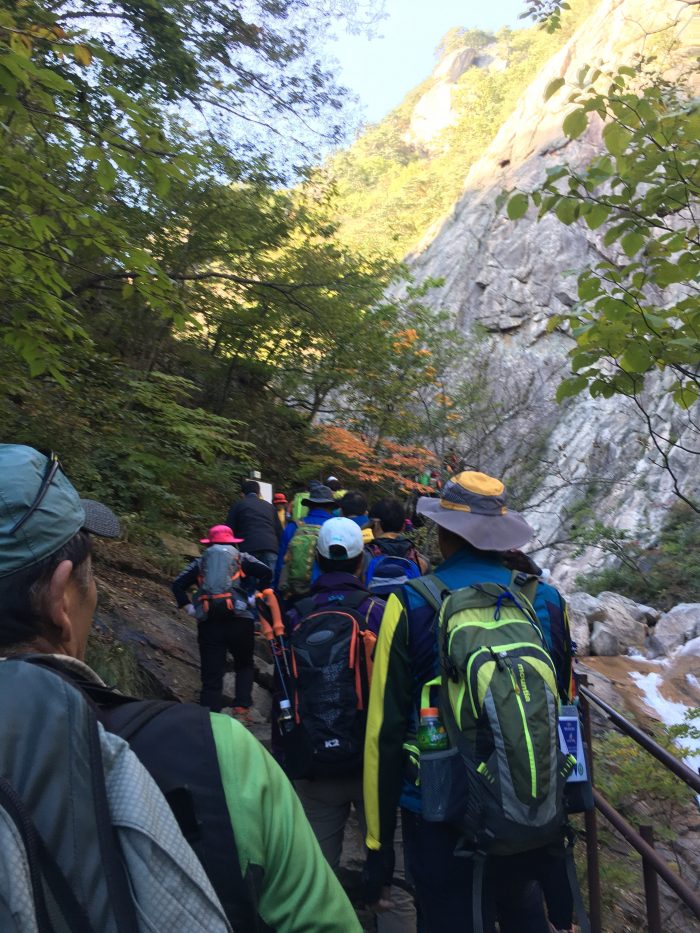 The journey to Biryong, Yukdam, & Towangseong Falls was a test of one’s patience. The total hike was only about 2.5 kilometers. The first part of the hike to Yukdam Falls is fairly moderate. It goes for about 1.7 kilometers after crossing the bridge near the Seoraksan park entrance. The route follows a tributary river that descends from the mountains. Since it’s a narrow valley that follows a twisting river, the path is not very wide. 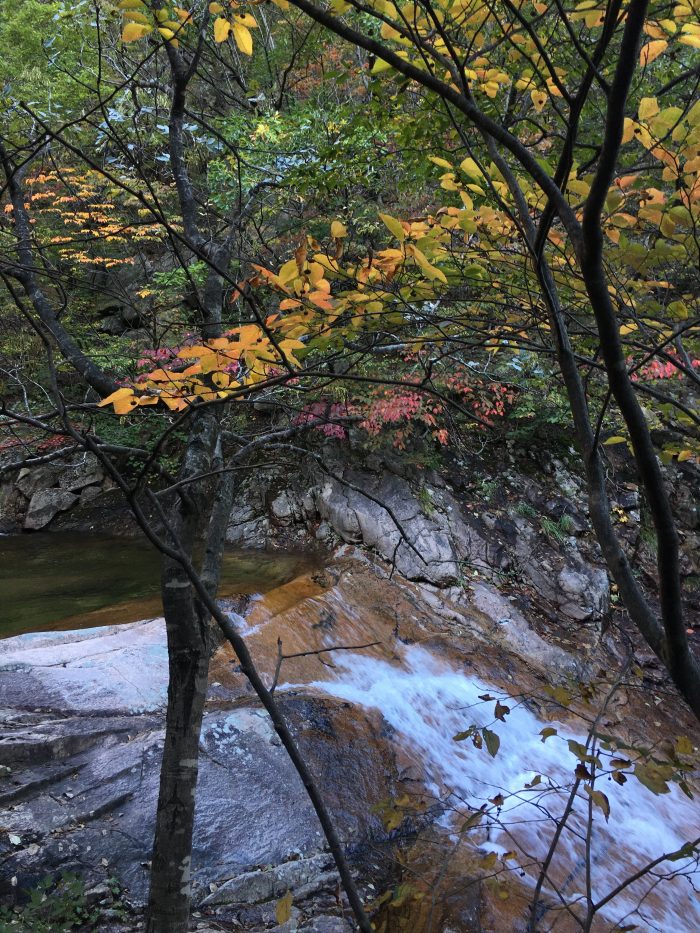 At the bridge across Yukdam Falls, the views were incredible. I couldn’t blame people for wanting to crowd the bridge while taking selfies, but it made getting across difficult. I have mentioned my fear of heights many times in my writing. Let’s just say I was not happy when I got stuck on the suspension bridge while some people bounced on it & others blocked it to take photos. 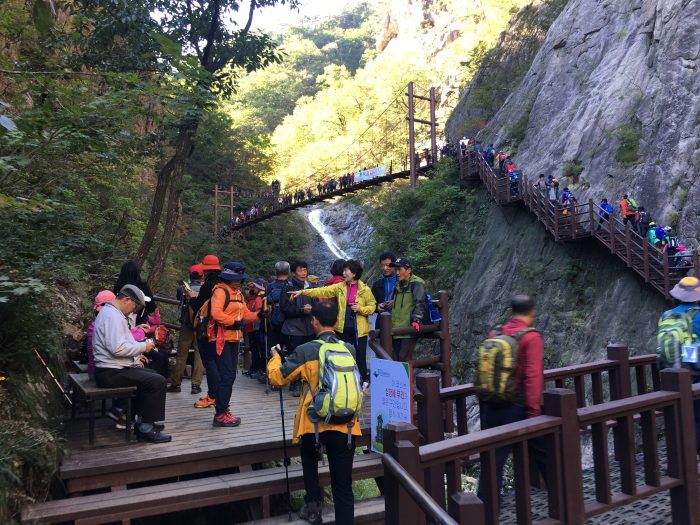 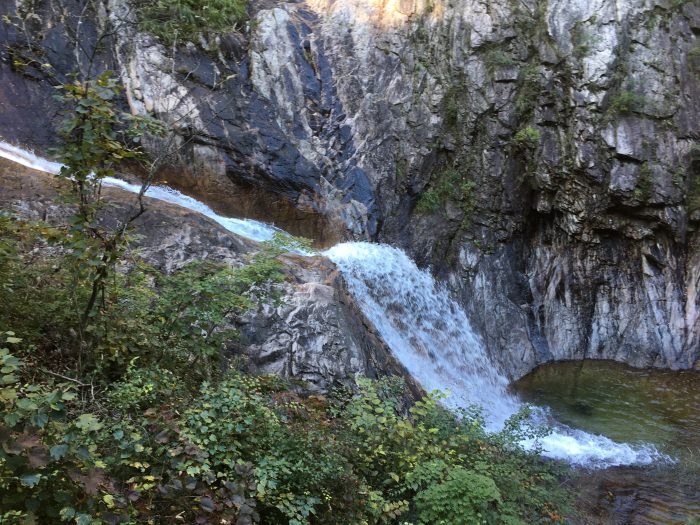 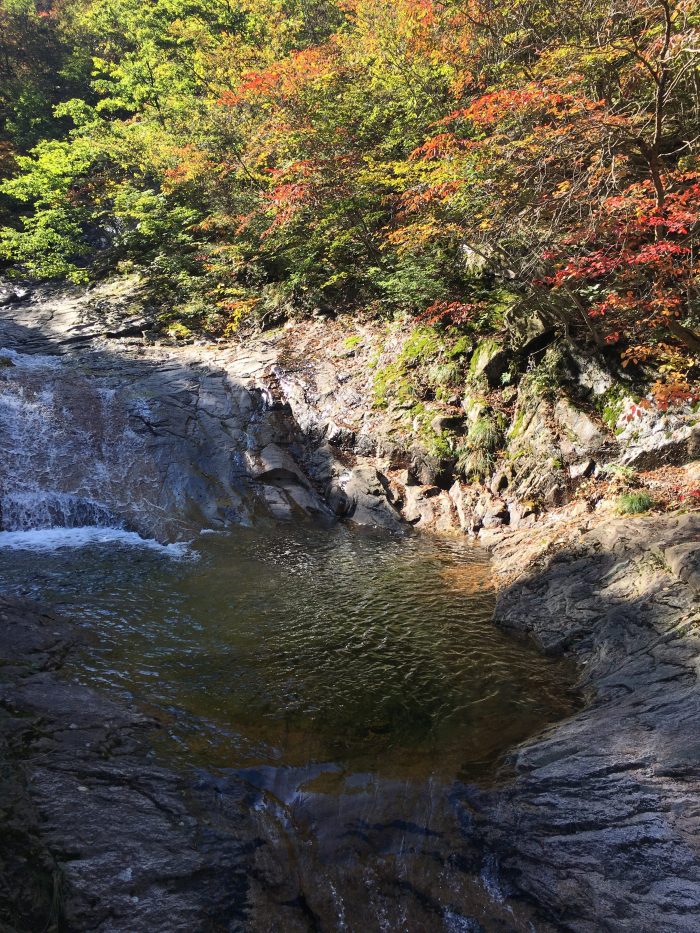 Beyond that, the trail gets a little bit more difficult for the final 0.4 kilometers to Biryong Falls. The whole hike to Biryongpokpo took about 50 minutes thanks to the crowds.

At 16 meters high, Biryong Falls is not the largest waterfall in the world, but it pleasantly drops into a small pond before flowing down the mountain along the trail. 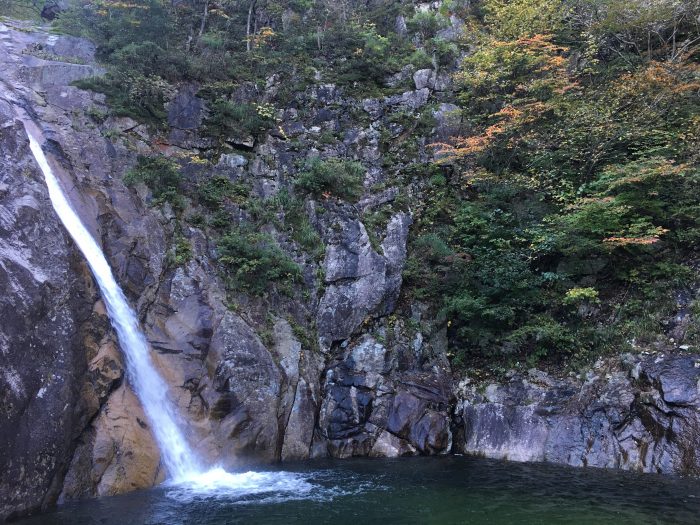 There is a large platform to sit on. This helps get people out of the way as they relax, since this is a natural congestion point. 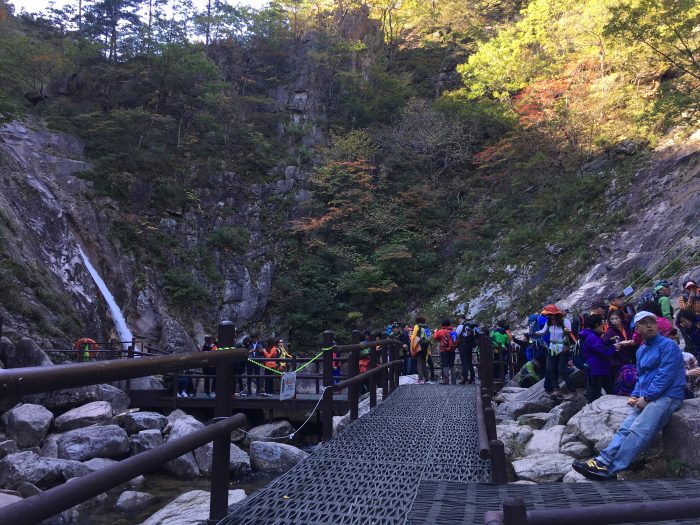 This staircase is the longest staircase I’d ever seen in my life. The “trail” continues for just 0.4 kilometers from Biryongpokpo to Towangseong, but this 0.4 kilometers is entirely vertical. 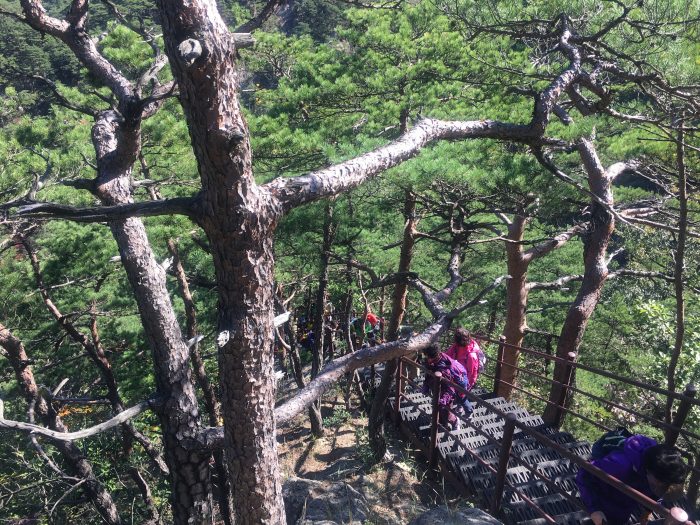 The staircase climb took me 25 minutes, with a couple of brief breaks at viewpoints along the way. My thighs were screaming by the time I made it to the top.

Towangseong Falls is over 320 meters in height, making for a magnificent ribbon of water cascading down the mountain. Even though the viewing platform is far away, you can still get a sense of just how long the falls are. 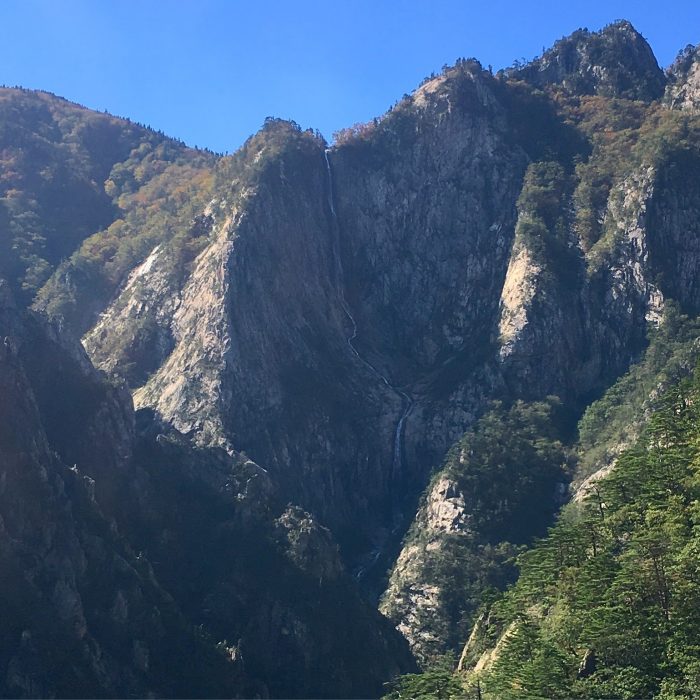 The vertical climb had not deterred many of the people along the way. As usual, there were plenty of folks taking selfies at the top. That’s fine after such an accomplishment, but I was amused by the ones who took photos of themselves while facing the falls, missing out on what they’d climbed all that way to see. 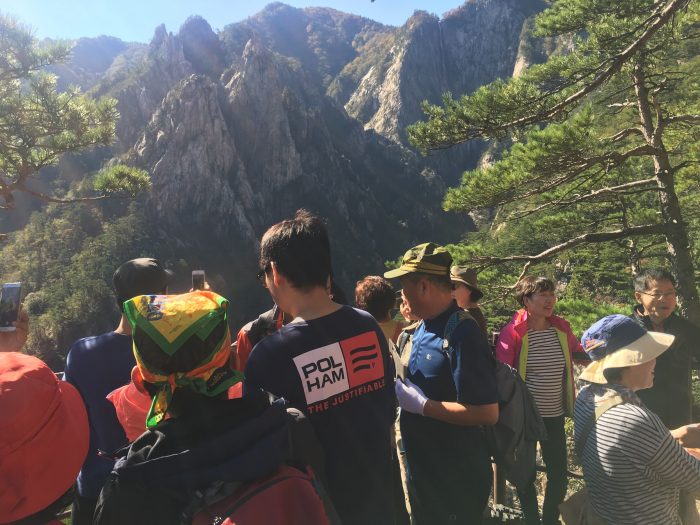 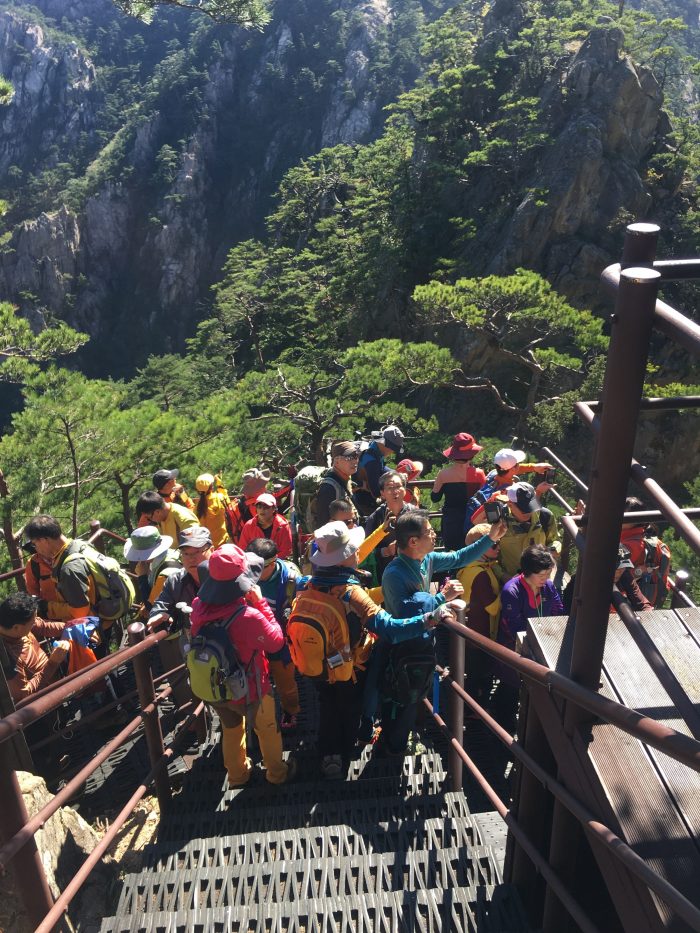 The observation platform for Towangseong Falls has several levels, so there are few quieter corners where you can rest & enjoy the spectacular views, especially on a perfect cloudless day. You could see across much of Seoraksan National Park, plus all the way to the sea. 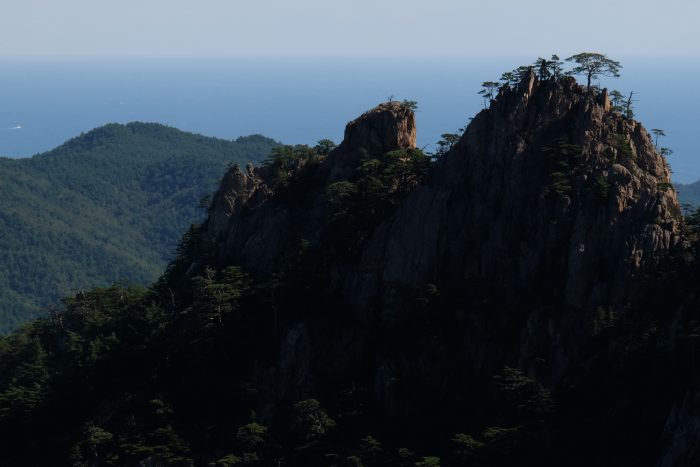 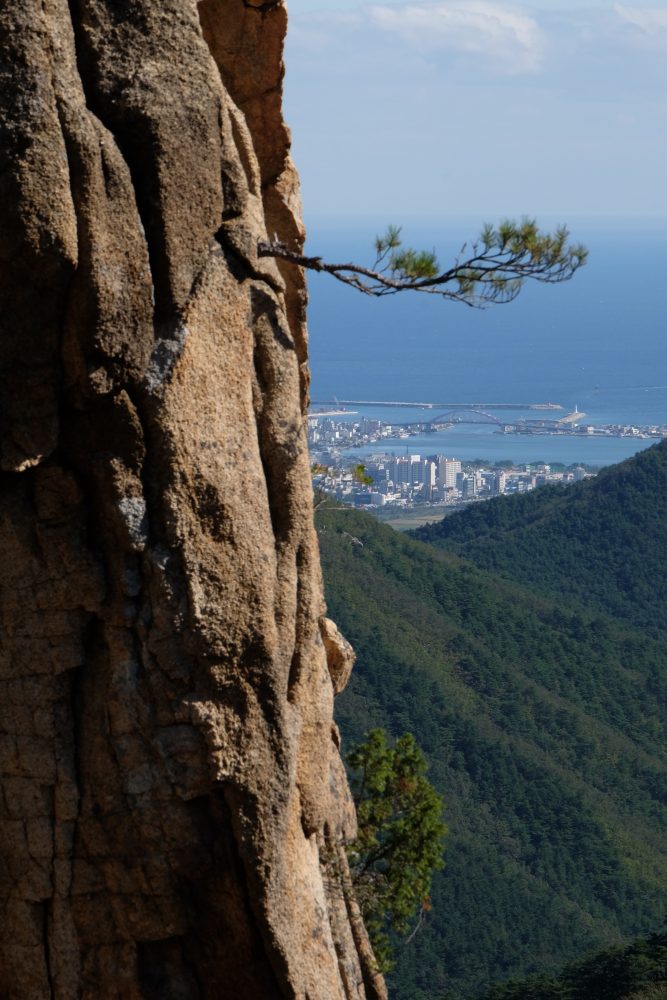 On the way back down, you still feel the pain from the climb up. As it got later, the crowds were somehow even worse. For the most part, everyone stayed out of each other’s way on the narrow staircases.

Once back down on the ground, I considered hanging out around Biryong Falls for a while, but it was clear that it was so busy that it wasn’t going to be enjoyable, so I continued back to where I began the morning.

The entire round trip took about 2 hours and 40 minutes. More and more groups were packing the narrow paths, forming a traffic jam of humanity in what would normally be a peaceful spot. In my opinion, the group tour guides were pretty poor stewards of the space. They had no regard for anyone else who was on the trail. When you have so many people, you can’t have groups trying to push their way ahead of other groups, but that’s exactly what was happening. I get that they have their timetables, but it made for a major distraction from getting out and enjoying nature.

This was the chaotic scene at the Towangseong Falls staircase at Biryong. 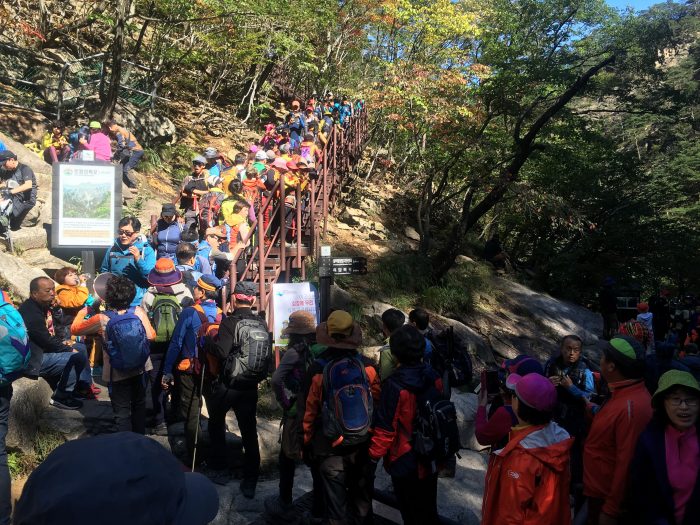 And this was the traffic to get back across the bridge at Yukdam Falls. 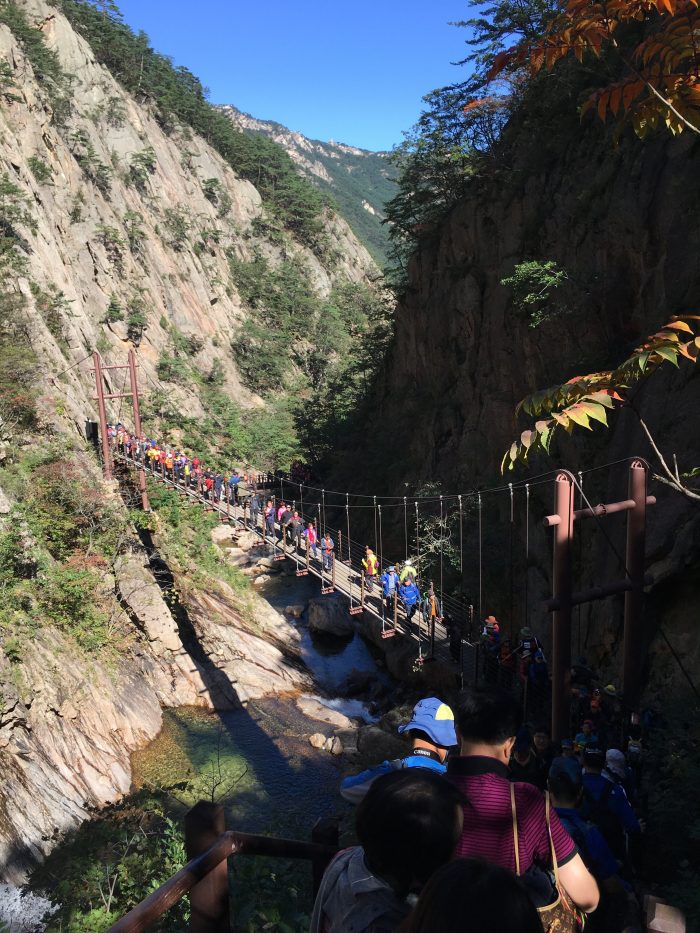 The hike to Biryong, Yukdam, & Towangseong Falls is truly beautiful. That said, I would not recommend it on a busy day unless you love combining hiking & queueing. Perhaps it’s better if you can make it there as soon as the park opens. Otherwise, the other nearby trails in Seoraksan National Park such as Biseondae & Ulsanbawi are still busy, but are much more manageable on crowded autumn weekends or holidays.