It didn’t take long for me to start to believe that Tallinn, Estonia is one of the most beautiful cities in the world, particularly Old Town Tallinn. Upon leaving my hotel, within a 2 minute walk I was in Tallinn’s medieval city center. 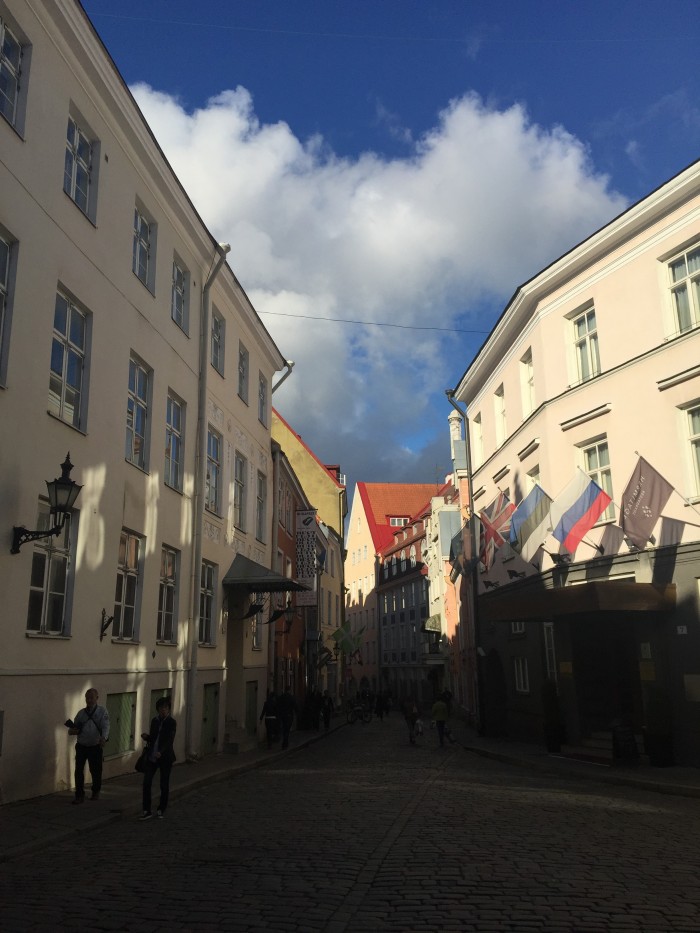 At times, Tallinn seems almost to pretty to be real. With stone towers, winding cobblestone streets, and dramatic views, it’s like something out of a storybook. 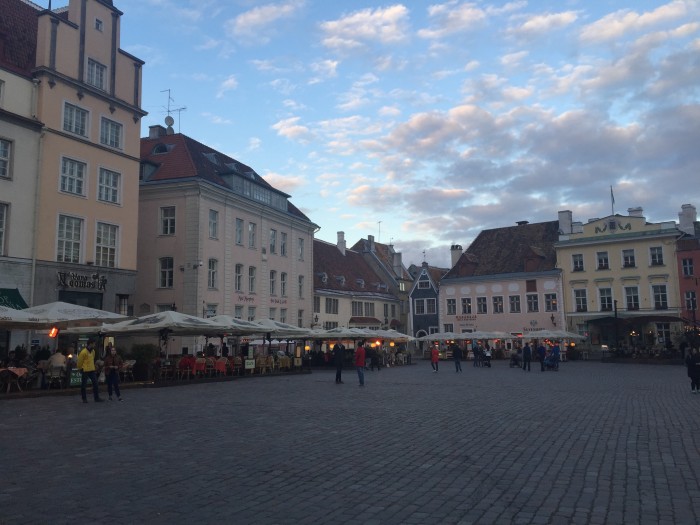 I’ve dubbed Tallinn as the “City of Views”, as there are several viewpoints where you can get stunning looks over the rest of the compact city. I can’t think of another city I have traveled to that has so many towers & overlooks within such a small place. Even if you stay on the ground on the lower levels, the colorful buildings & streets are also a delight to look at. 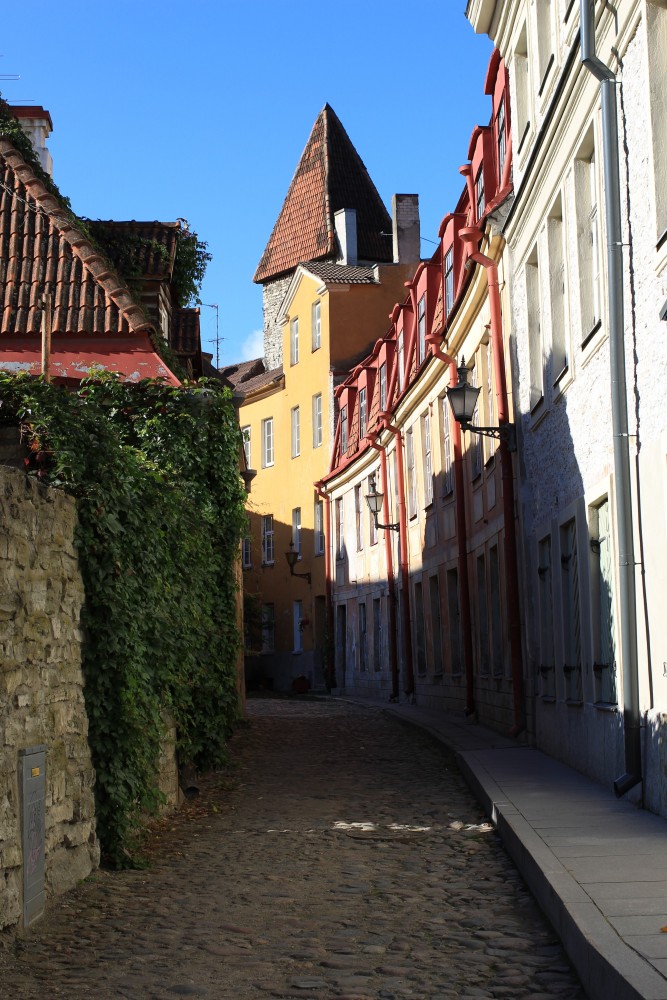 I spent a while wandering the streets, admiring the architecture, which is impressive both during the day and at night. In the center of the Old Town is a large square right outside Tallinn Town Hall. The tower is accessible to visitors during the summer months, but it was closed when I was there. 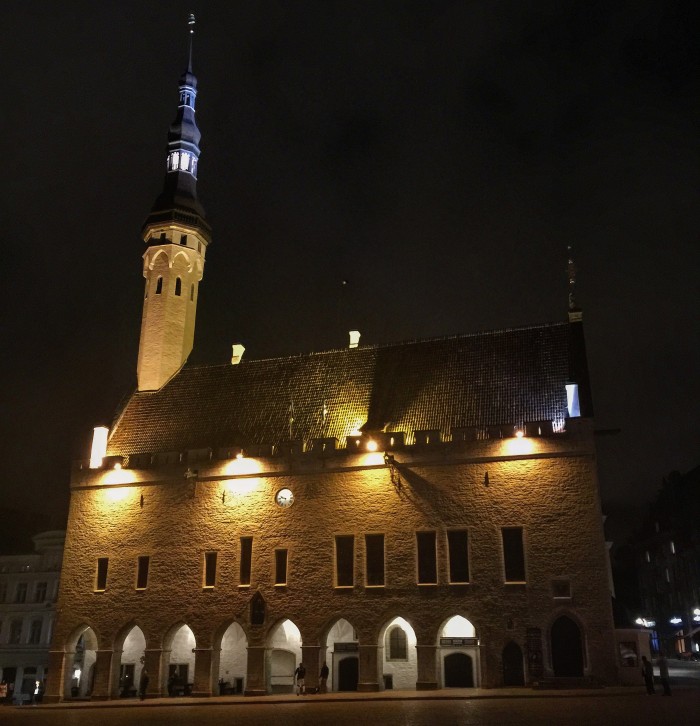 The Old Town of Tallinn is filled with restaurants & bars. While many are touristy, with some research you can find plenty that aren’t. For example, wanting a change from heavy Baltic food, I found an Indian restaurant called Elevant, which had very good Indian food with a local twist, such as moose korma. It was a welcome break, while still uniquely Estonian. 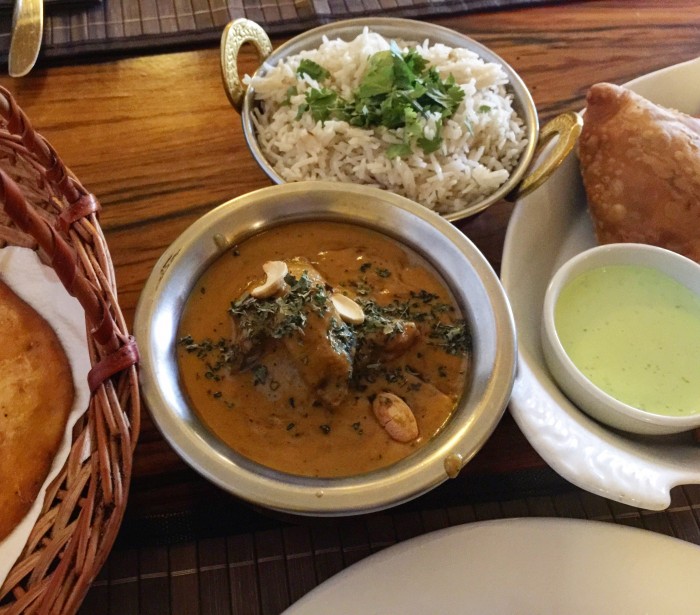 On that first evening I worked off the moose korma by climbing up the narrow streets to watch the sunset from the Kohtuotsa Viewing Platform on Toompea Hill. 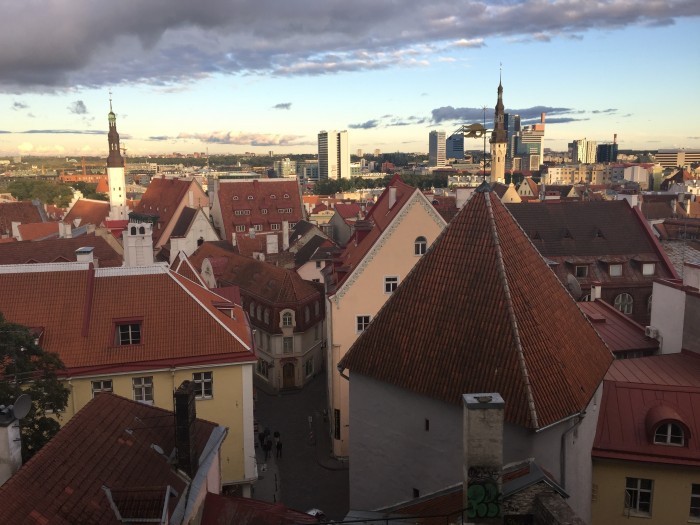 There are two viewing platforms on Toompea Hill, Kohtuotsa and Patkuli. Each has a different view over Old Town Tallinn, and are worth visiting multiple times during different times of the day while you’re in the city. Expect crowds at both of them, especially at sunset & during the summer tourist season. Yeah, there’s a bit of a steep walk to get to them, either via winding road or staircases, but they’re worth the effort, and they’re not far out of the main part of the city center.

In addition to the viewing platforms, there are also several towers that rise above Old Town Tallinn. I visited two of them on my final day in the city. 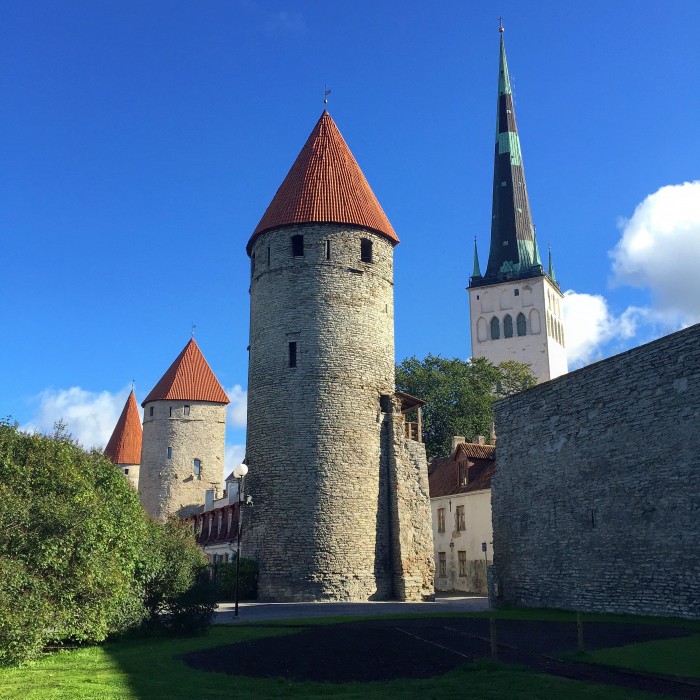 My first stop was St. Olaf’s Church, which is the largest Medieval building in Tallinn. It originally opened in the 12th century, but has been rebuilt several times following fires caused by lightning. When you see how tall the spire is (123m total), you’ll understand why it has been hit so many times. 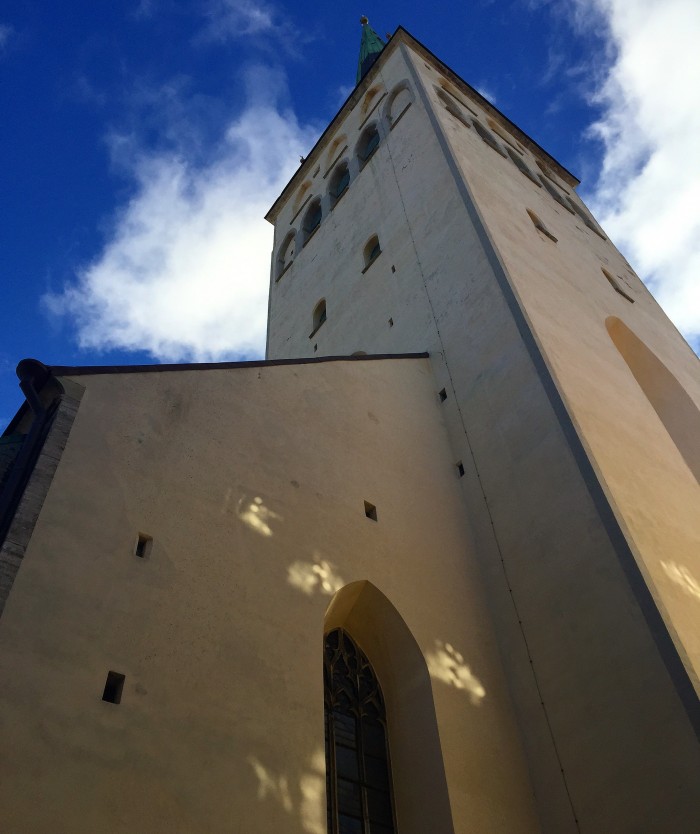 Reaching the top means heading up 258 winding stone steps. It’s an arduous climb, but unlike some towers, none of it is exposed to heights, so I didn’t mind it at all. The worst part of the climb is the ladder-like staircase that forms the last stage up.

While St. Olaf’s Church was rebuilt many times, none of these reconstructions took into account building a proper observation deck. As a result, the visit to the top of the tower is pants-defecatingly harrowing. 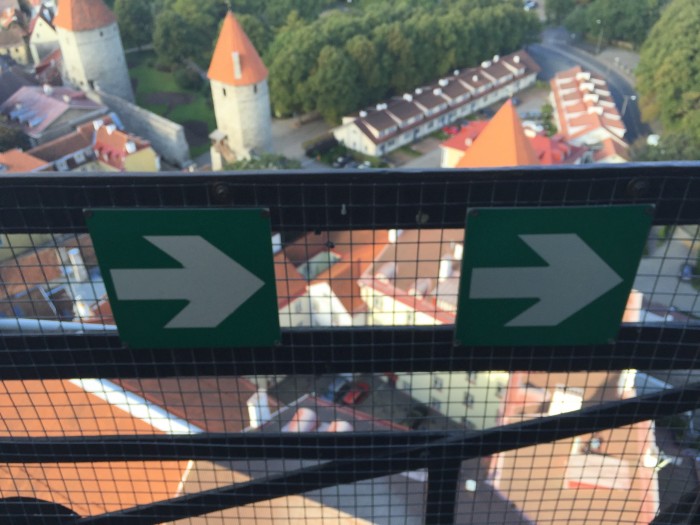 Sure, there’s a bit of a fence, but I didn’t have much faith in it. 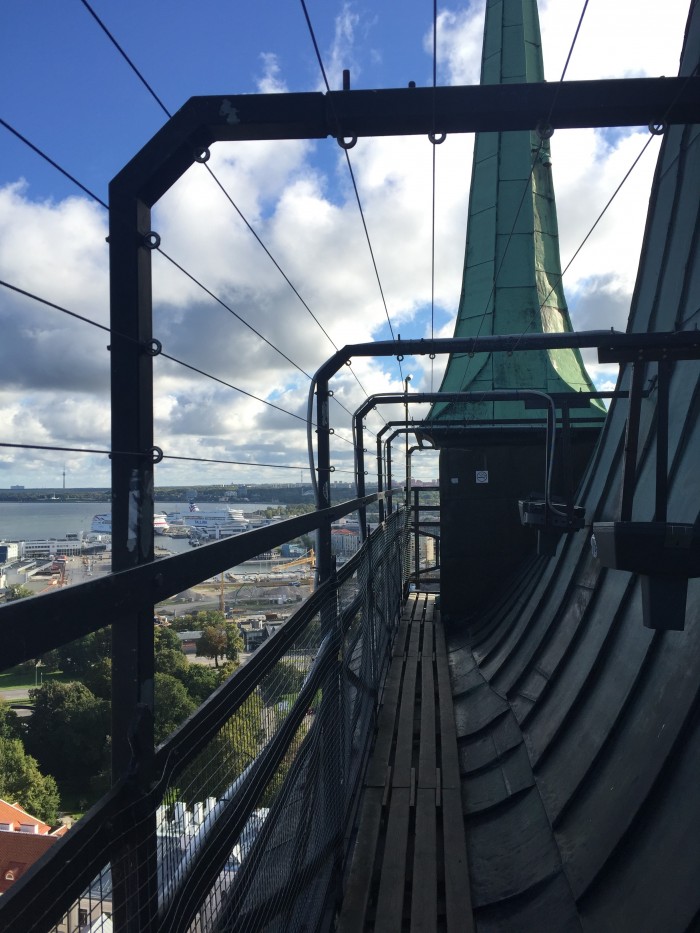 Luckily, I had visited fairly early in the morning on a weekday, so there were only two other people at the top of St. Olaf’s, both of whom seemed about as adventurous about being near the edge as I was. We all took great care when we passed each other, and avoided looking down too much. That said, the views are incredible, so eventually you have to just suck it up and realize that people probably don’t plummet from St. Olaf’s too often so you can probably relax and enjoy it a bit more. 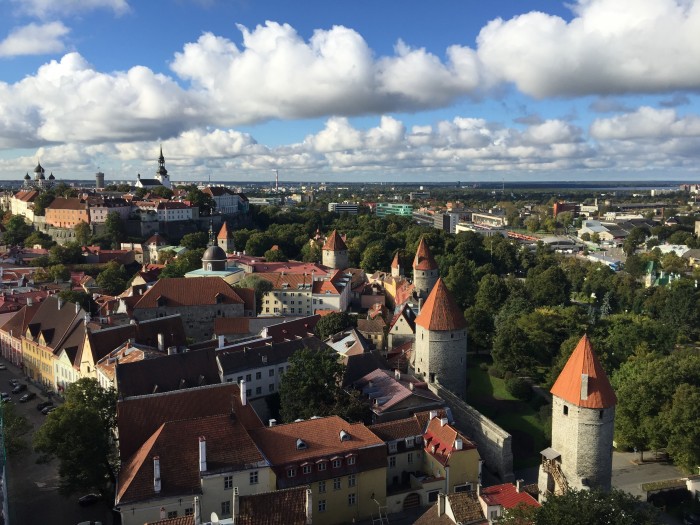 If you’re not a fan of heights, then be sure to get to St. Olaf’s early to avoid the crowds, or stick to one of Tallinn’s other towers & viewpoints. I imagine it would be a much more terrifying experience if there were hundreds of people also trying to make their way around the narrow deck.

Descending back down to the Old Town, I walked around below the city walls of Tallinn, which are ringed with many red-roofed towers. These towers make for an immediate iconic image of Tallinn. Many of them do not seem to be open to the public, or at least they weren’t when I was visiting. They’re still pretty to look at from the ground. 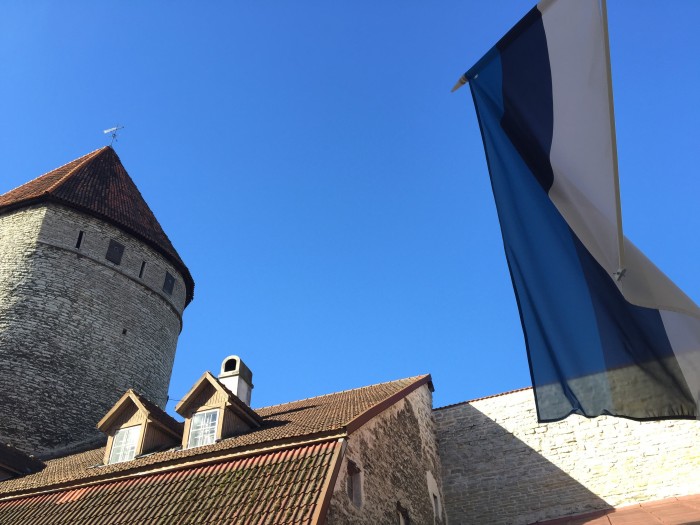 I passed some little kids who were being walked on leashes, then went back up to Toompea Hill for a third time to take in the daytime view.

There are a few other sights up on Toompea Hill, including the Russian Orthodox Alexander Nevsky Cathedral. It’s a beautiful building, both inside and out, though the outside was being refurbished when I was there. Photography was not allowed inside, and while in some places I may be tempted to take a quick photo without flash, there was no way I was going to try this in front of the very large guard who resembled a Russian mobster and/or KGB officer. 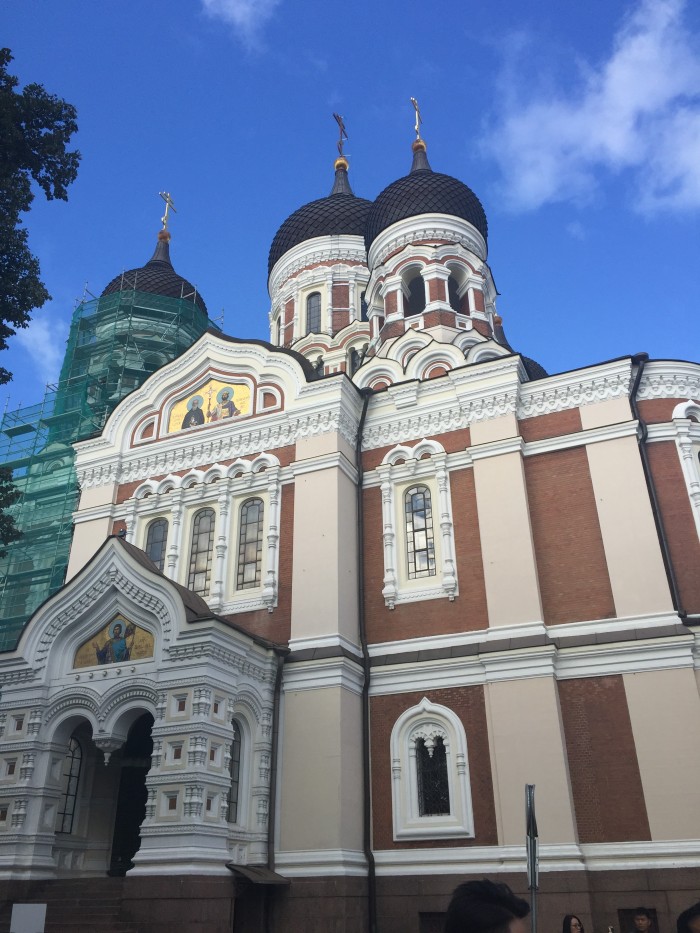 From there, I headed just a bit back down the hill, past an archery school, which sadly was closed. At 10 euros for 20 arrows, it would have been a fun thing to do, especially with all of the history nearby. 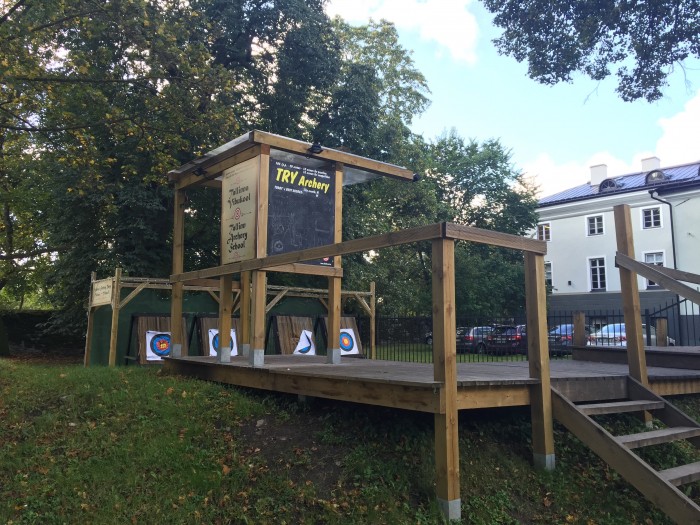 Here there are more medieval towers and walls, a couple of which are open to the public. One of these is called Kiek in de Kök. I’ll let you giggle at the name for a second, but it actually means “peep into the kitchen” in low German thanks to the views it gave into local homes.

Kiek in de Kök is now home to a museum about Tallinn’s fortifications & military history. While the museum isn’t large, it makes good use of the small floors of the tower.

At the top, there’s a cafe, which was closed, along with what appeared to be a model of the Death Star.

There were also nice views of Toompea Hill & Old Town Tallinn, though they were through fairly small windows. Defense towers don’t tend to have massive picture windows. 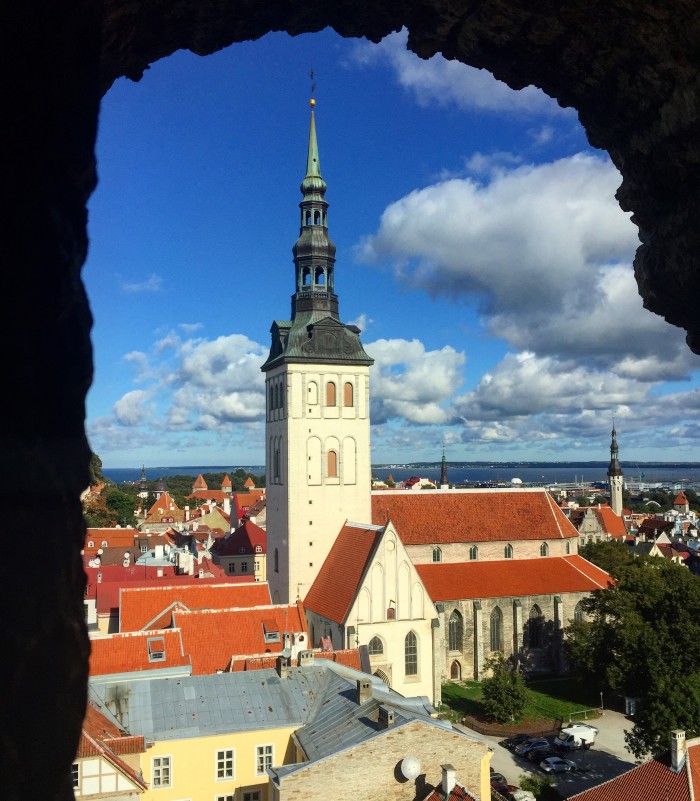 These are just some of the many great sights in Tallinn, one of the most beautiful cities I’ve ever been to. It’s a great city for wandering, especially if you love history. Best of all, it’s still very affordable, as it’s not as famous as some of Europe’s other old cities. 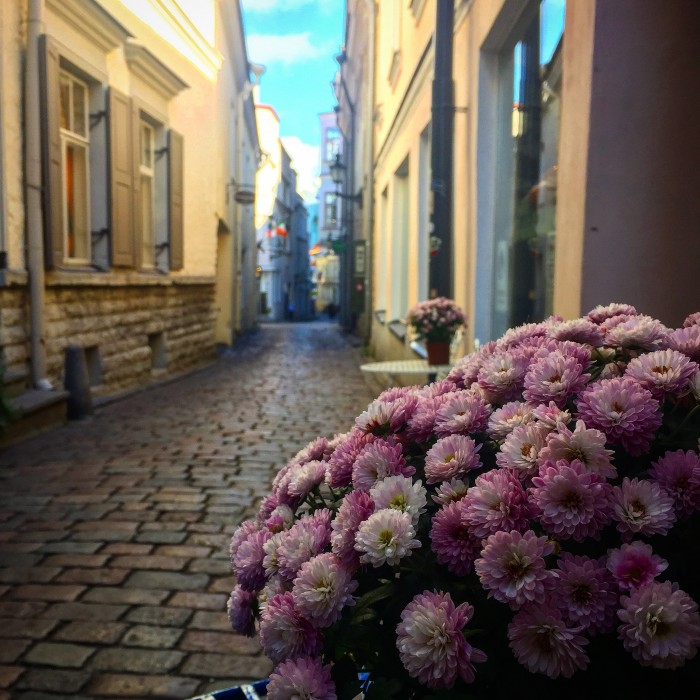